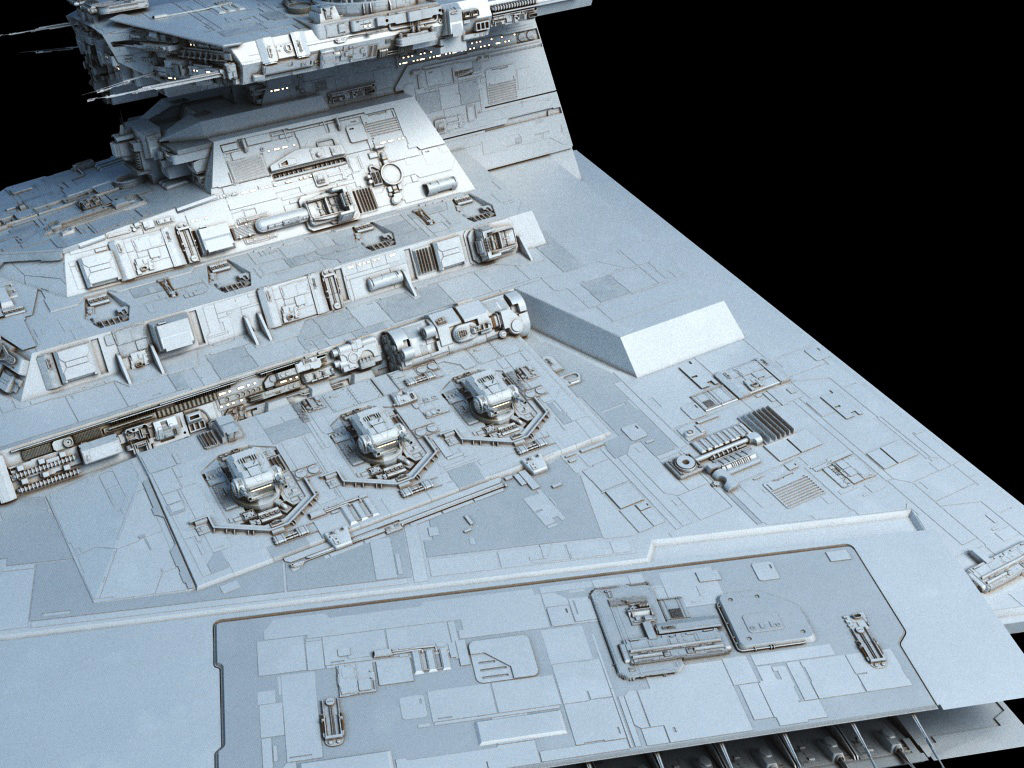 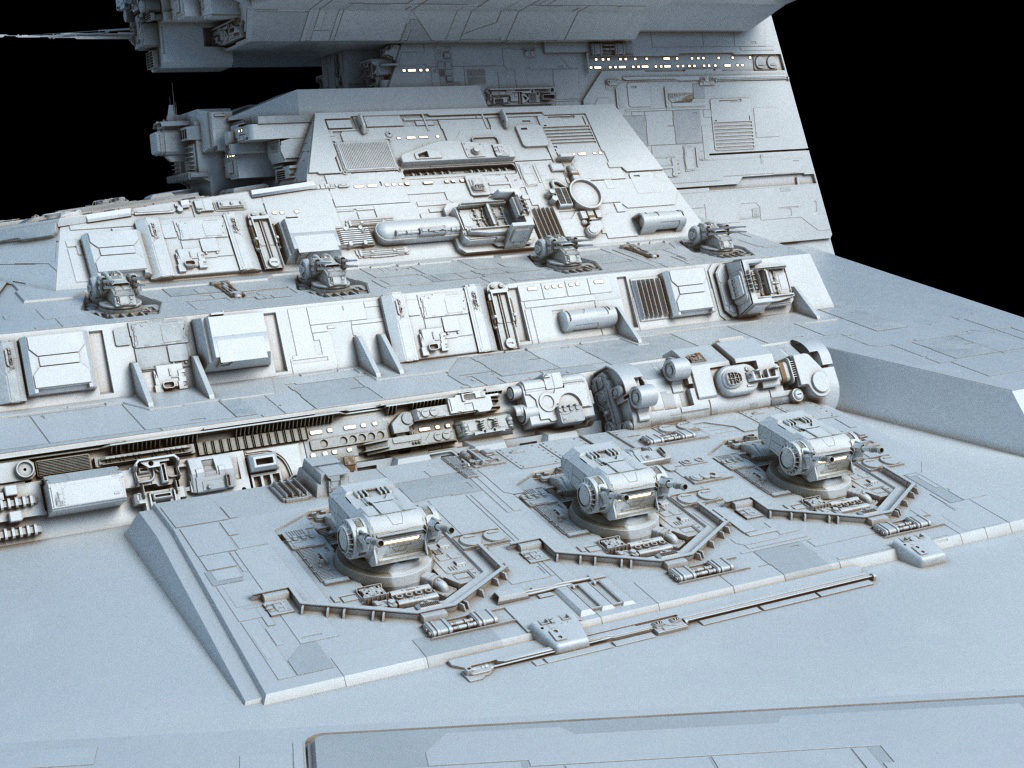 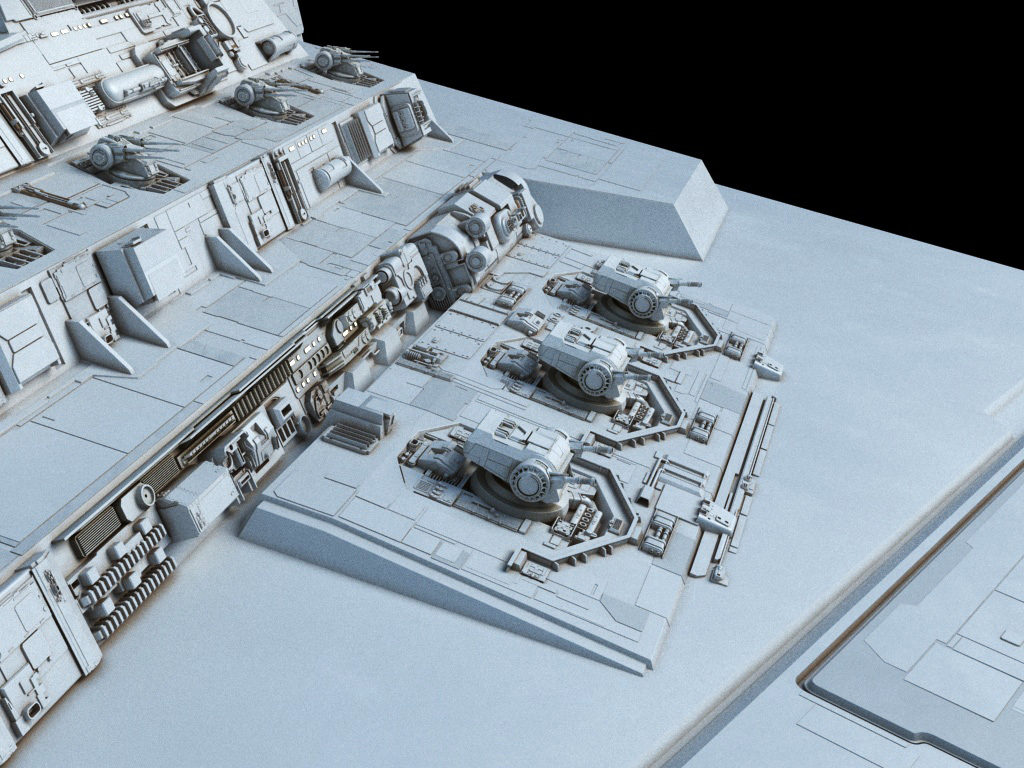 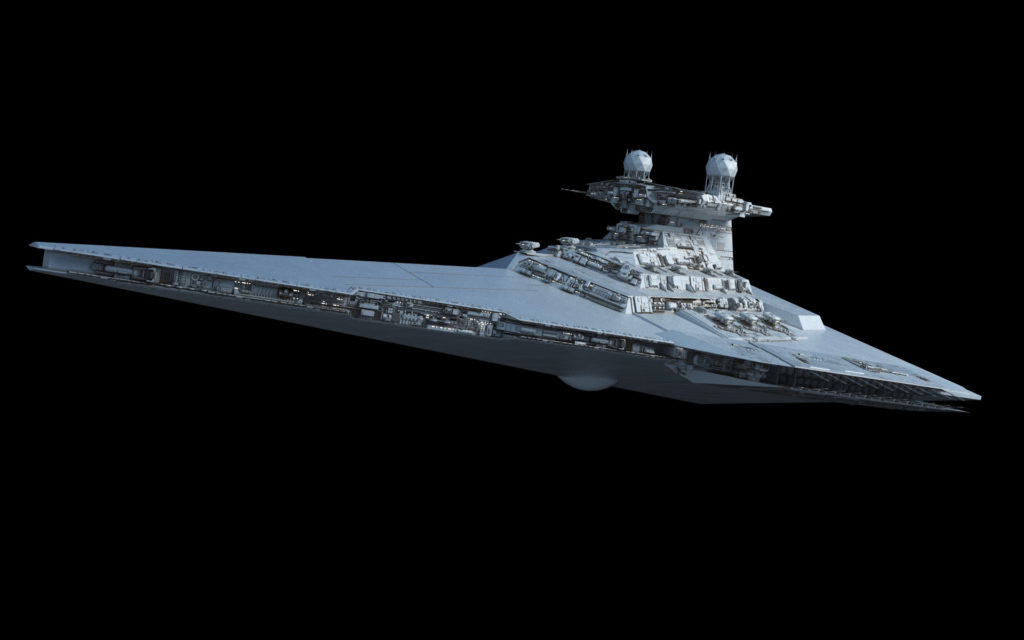 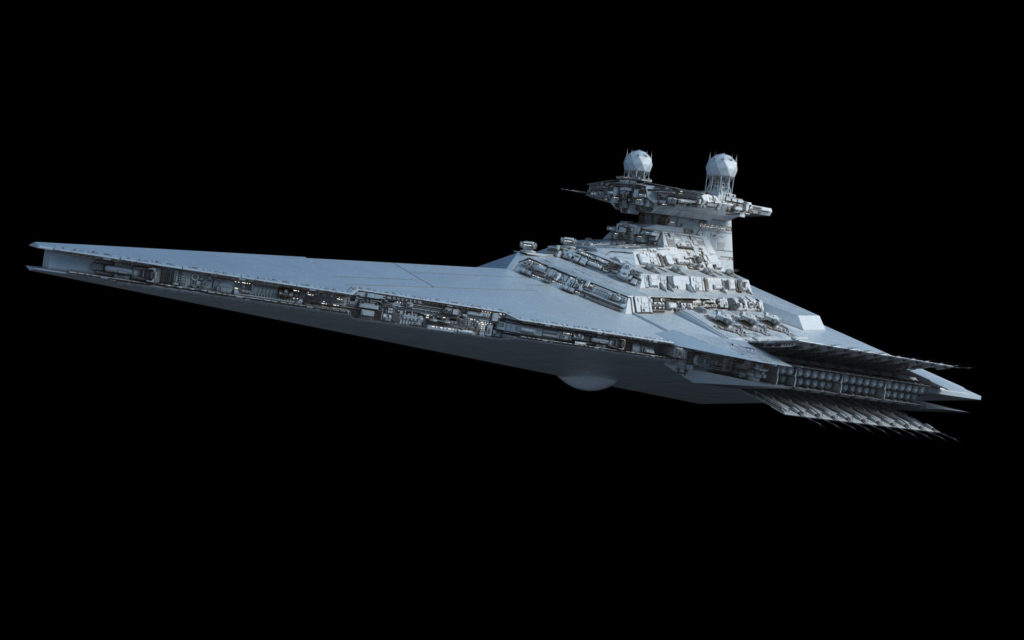 Okay, so the guns we see in close-up on the port side are … what?

The barrels don’t seem to be long enough to be turbolasers….

Um…they are the same turrets as the heavy turbolasers on the Venator.

This looks sick, would love to see all the work you made put into a Modded version of EAW FOC. That way we could see how the ships really handle at their right specs of weapons. Would be cool to see a Venator, Acclamator, Aggressor-Class Destroyer, Vengeance Class Frigate, and the Keldabe

I didn’t get to finish, I would love to see the ships listed above in my previous chat in a full form with more accurate weapons etc. I know those ships can have a bit more on them, at least the EAW FOC ships. I do love the work you do Fractalsponge! Can’t wait to see more. Also just curious do you plan on getting a team together to create more content of the Star Wars Galaxy of Ships and other vehicles?

What are the demensions of this star destroyer like length,width and height?

Ah, eight twin HTLs in all-that’s honestly more energy-weapon punch than I expected for this Vic-I revision, with a slightly better aft-arc than either mark of Impstar to boot. Missile batteries do seem alarmingly close to said mains in the event of a golden-BB hit, but perhaps that could be mitigated by launching from whichever flank *isn’t* facing an alert opponent.

Seeing those lighter quads on the side originally made me think he was holding out on us when it came to armament.

On a side note…I have always felt that the SDs were skimped on when it came to ventral firepower….and seeing the DS in the R1 trailers with the main laser pointed downwards just set that more in my mind.

Point re: ventral guns, though the ventral side on Imperial destroyer designs also features two rather large soft spots (hangar & exposed reactor portion), and as such mounting your mains on the opposite surface *might* keep said tender bits out of trouble when trading fire with comparable foes.

However having no guns there means that those tender bits an easier target for enemies. I am not saying give them the heavy dual turrets but something to keep people from hitting an easy target.

Well, while I’m unsure about an Impstar’s ventral medium-turbolaser count, there seem to be enough light guns down there for chewing up corvettes & giving frigates a rough time. And heavy missile-armed craft like the Vic or FS’ Dreadnaught refit could target would-be flankers from any angle, though projectiles have their drawbacks (comparatively slow, possibly targetable/jammable, etc.). Incidentally, you might dig Burntstrobe’s take on the Victory III: http://www.moddb.com/mods/yuuzhan-vong-at-war/images/victory-mk3-star-destroyer

The arc thing comes up all the time. Remember that ships aren’t stationary batteries – they can maneuver. An ISD would maneuver to keep a target in alpha arc as much as possible. If you have dorsal and ventral guns, your alpha arc is actually smaller because you have to keep a target in a very narrow forward cone. Because that cone is forward, it is also very hard to maintain range to a target (this is a big deal if the target is say, something you wouldn’t want to approach like a Star Dreadnought). Ventral main guns are good… Read more »

Will probably be 9 – 3 batteries of 3 turrets – one centerline, one on each flank. And yes, a Vic-I would be very careful about using its missiles, both not to waste them because they are limited unlike HTL shots, and to protect the magazines as much as possible.

Ah, so one more axial turret. I’m starting to wonder how evenly-matched the Vic-I would be with your Procursator-class, which seems to have thrust + bulk (and hence shielding) on its side, though not nearly enough of the latter to disregard Victory-tier projectile barrages.

Would be pretty close if they had to fight. Procursator has superior acceleration, and can decline action at will. Gunpower wise it’s pretty close over the long haul. Procursator has a slightly heavier HTL alpha, but both ships would be drawing down capacitor power in a long engagement. Vic has 80 heavy missile tubes, Procursator has 24, so definite advantage to the Vic there. If the Procursator can use its mobility to keep the Vic in the least-optimal missile engagement envelope, it would win eventually, but it would not be simple. Ultimately, they are both ~3.5e24W destroyers, so you’d expect… Read more »

So unless/until the Vic runs low on missiles, the Procursator might be best-served employing that offset, range-maintaining “3-D broadside” approach you outlined above WRT destroyers in general and prickly targets, thus ensuring that any volleys the Vic lobs off have a long, difficult/predictable-for-point-defense pursuit curve. Doubtful either ship has an overwhelming fighter/attack-craft edge, but the Procursator’s might also be gainfully employed for missile interception.

Really cool do far! So much better looking than the canon one imo.
Are you following the canon armament or just make something up that seems appropriate
also, do you think you’ll ever do a TaggeCo modular taskforce cruiser or another custom walker?

Between some of your current projects and your existing stable of frigate/corvette-scale renders, there might be the makings of a fairly nifty “Light Convoy #53476” pic or two.