So I’ve been thinking about a 3-4km star battlecruiser. I wanted an old-timey comics feel to the design, so I started messing about, then realized that I had a hull that would work – my old Victory-class concept, which obviously wouldn’t be a destroyer now. That had a deliberate mix of PT and OT elements (makes sense, right, late Old Republic/early Imperial design). So I started scaling, then grafting on superstructure bits. I tried making the bridge a little different (in my mind this design is definitively Old Republic KDY, maybe even older than the standard hexagonal bridge module, but refitted for the Clone Wars and Imperial era). Here’s what I got. 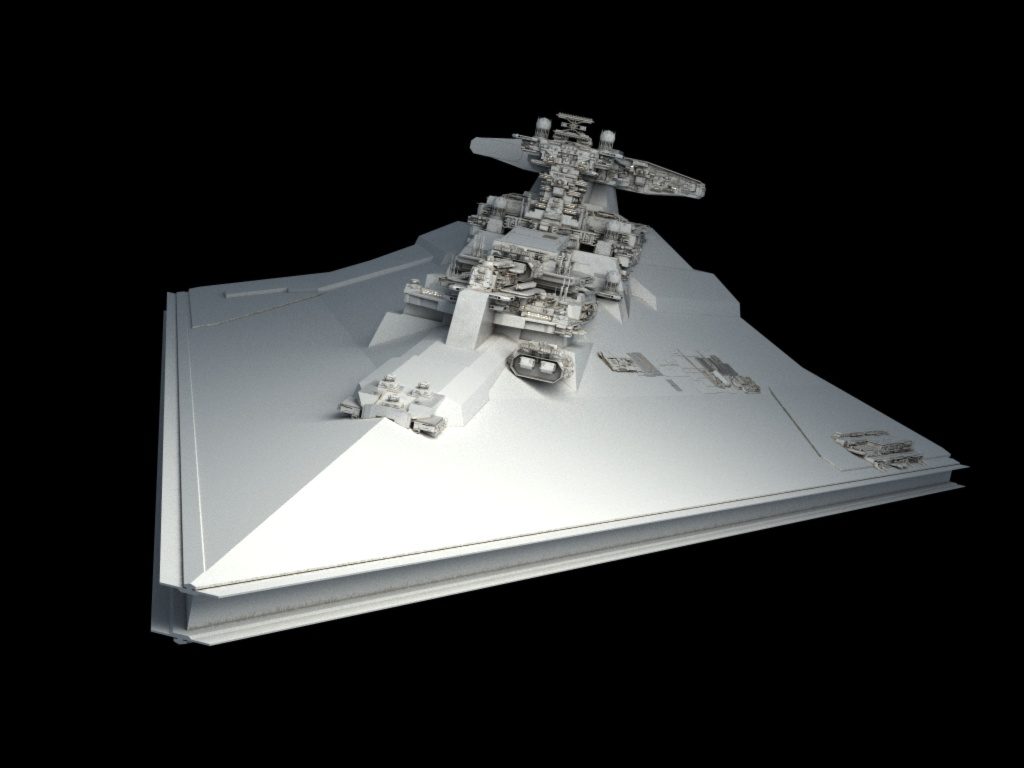 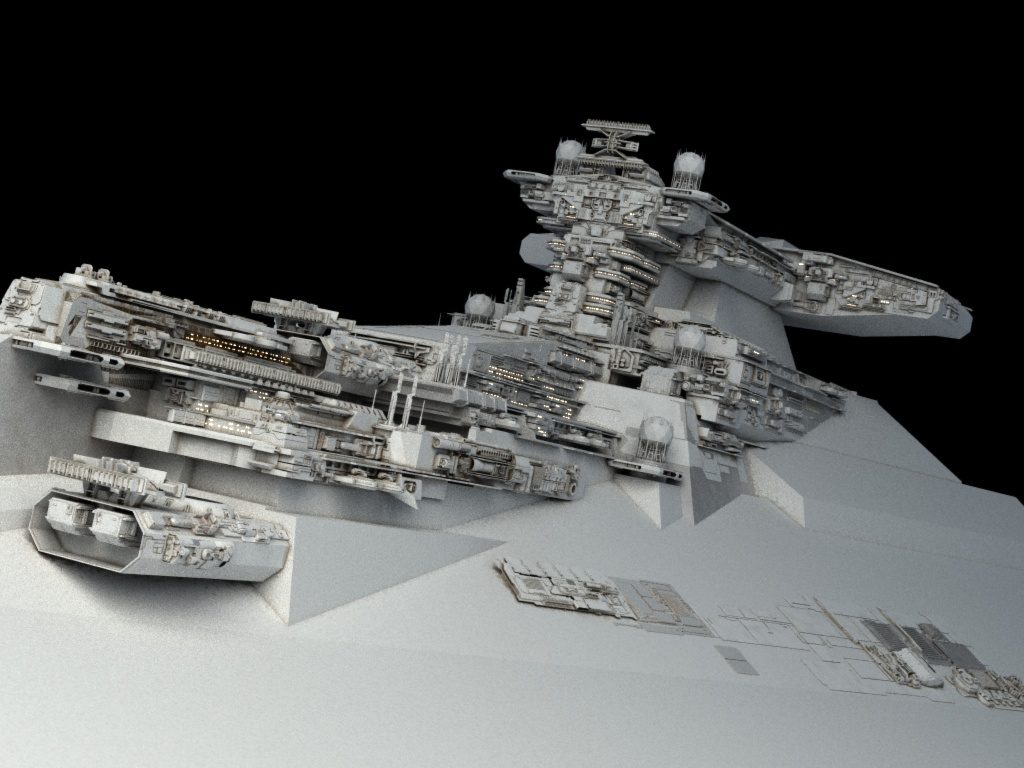 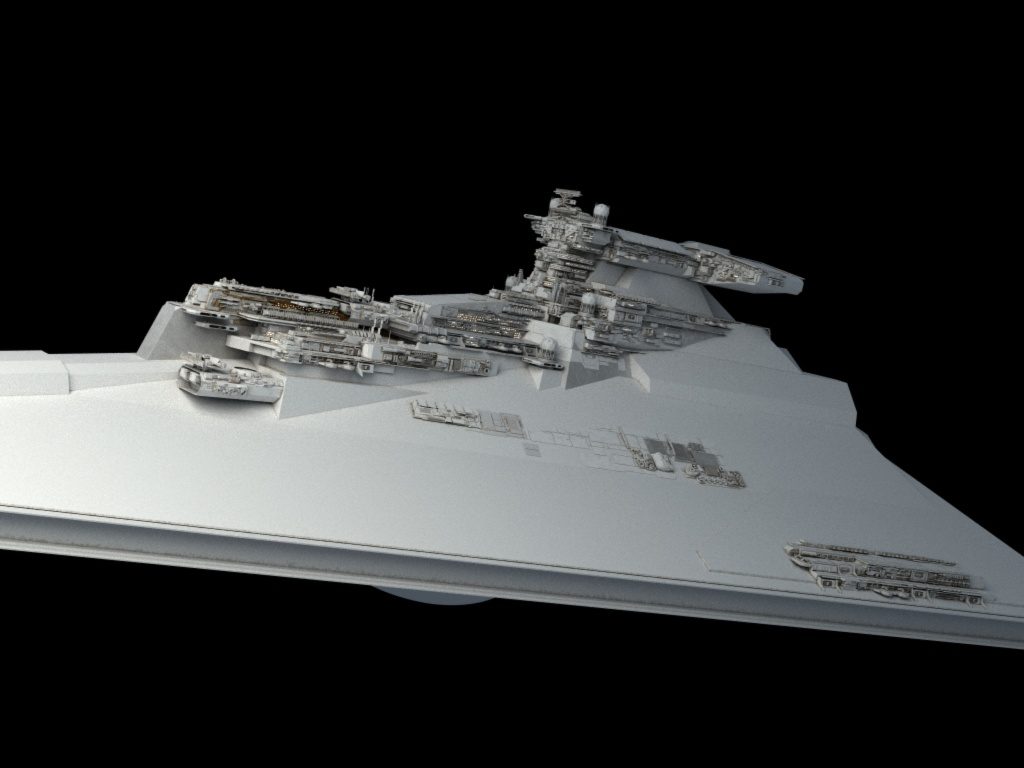 I love this battlecruiser design. It is sort of reminiscent of the Tagge Battlecruiser design from the Marvel comics. It definitely has the correct aesthetics for that time period.Thank you for sharing this Fractal.

Thus far this puppy seems very Praetor-I/newspaper/80’s Marvel evocative, so good call on the greebling density & extra command-tower distribution of same. I’d be sorely tempted to halve those aft command-module winglets, though shaving ’em too far might mitigate that whole silhouette efect. Color me very curious about that octagonal module near the bow-backup sensor station?

Beautiful ship! What sort of role would a ship like this have? It looks very command ship-y…

Well, it’s certainly leagues above any previous attempt to model the Procurator. 8e25w on the main reactor perhaps?

Thinking probably on the order of 1.2-1.5e26. Double Allegiance power on way more than double volume, but then the Allegiance is a highly specialized ship-killer.

Unless you believe that there’s a significant technology gap in power generation between this bruiser and the next generation, why wouldn’t this one also be a specialized ship killer?

The only thing left to do with volume is cram it with reactor/capacitor, which should make it very deadly for its size.

If Old Republic KDY designs are one note, then you wouldn’t have Legator (yes I know that’s my design but it’s based off a comic book ship in profile with those massive sensors). For purely fortress/area defense roles then yes, everything would be a specialized ship killer. However, I think a case can be made for more intervention and fighter during the Old Republic. Endurance seems to be arbitrary – fuel tanks aren’t large anyway. Anyway, it’s a time of relative peace, so specialist designs shouldn’t be required because high-end war with massed fleets isn’t required. That militates against ship… Read more »

The problem with figuring out what’s actually going on in Old Republic astropolitics and their relation to fleet dispositions is how inconsistent legends information seems to be. If we treat the Stark Hyperspace War from legends as a data point, a minor pirate skirmish in the outer rim was consequential enough to draw in the Trade Federation, the Jedi Order, the Eriadu sector, and the Senate itself. When Tarkin’s uncle Ranulph went in to kill to kill the pirates that had caused all this nonsense, his heaviest unit was a light corvette. Eriadu is recognized elsewhere in canon as a… Read more »

Eriadu may have been wealthy, but there’s no rule saying that wealth needs to be matched by proportional military power in an era of fairly profound general peace. Eriadu is also sorta out of the way – there may not have been a pressing need for much beyond corvettes and frigate sized stuff, but they could easily (and probably after Stark did) buy better. That may be quite different in the Core even during peace, if major powers are right next to each other and meddle in each others’ business at the periphery even if they don’t launch mass offensives.… Read more »

Shouldn’t Eriadu’s outer-rim status imply that it should need more, not less military spending than somewhere pleasant in the core? The gradient of Republic control seems to peter out around there, with Hutt-controlled planets only minutes away. Regarding your Poland and Belgium point, Poland needs a large conventional military because there’s a far larger conventional military with a long history of trying to annex Poland minutes away, (If Lukashenko allows them to stage in Belarus) while something like Operation Reforger would take weeks. My point is that there isn’t really evidence of conventional forces outside of the Republic worth mentioning… Read more »

I don’t think the galaxy is homogeneous by ring from Core… I can see the Core being largely rich but with some pockets of dirt poor, and some of the rich parts being highly contentious. My point is that I think the Republic isn’t a particularly strong federal structure. I’m thinking more Holy Roman Empire than United States. Individual states, individual militaries, individual national/species/economic imperatives leading to cold wars, gunboat diplomacy, and all-but-declared wars in the guise of peacekeeping/counterterror/whatever random pretext. All kept from boiling over by Senate mediation, threat of/active Jedi intervention, or the Senate empowering coalitions of local… Read more »

I thoroughly agree that that the galaxy isn’t absolutely homogeneous in terms of wealth and conflict, but perhaps the Holy Roman Empire isn’t the best comparison with the Republic. There isn’t a single century in the H.R.E in which some elector principality, breakaway Italian city-state, or independence minded low-countries county didn’t fight a fairly significant war within the empire. During the interregnum, they even suffered a mass proliferation of virtually independent pirate Raubritter, or literal robber barons. The Republic on the other hand is extraordinarily stable and peaceful on the whole, a polity with a recognizable structure for 25,000 years,… Read more »

The Republic as a whole was peaceful and stable over its history, but that’s only because it does have an enormously long history and it’s enormous. There are 1 million member “worlds” (everything from planets to enormous multi-stellar corporations and entire star clusters), and on the order of 50 million dependencies. On that scale, open multi-stellar war is not that big, unless it drags in polities that can structurally affect the whole Republic (for example, the Trade Federation). Two planets fighting each other for such a unit is like a street fight in the United States – common, unfortunate, and… Read more »

So that what this ship base off

sorry didn’t finish it “so this ship was base of the procurator class battlecruiser then like this one? 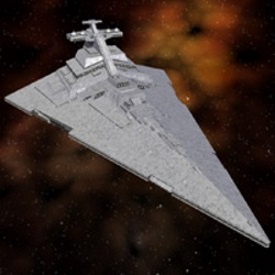 It is very old time comics in feel, I had a lot of them as a kid. Right now the only change I’d make on esthetics is either extending the squished/flattened octagonal section aft of the bridge forward, or dropping it altogether. It looks just added on right now. I’d stop it at the notch on the underside of the neck in your last picture. I’d consider doing a big recess in the bottom too, ala Executor. I think it would work as a compliment to the busyness of the dorsal side. It might seem odd to have more of… Read more »

The Nebulon thing kinda depends on *what* they’re accepted as, IMO-ships that have any business being the biggest thing in a fight with star destroyers (Rogue One and at least a single X-wing book strongly hint otherwise), or generally useful light support for small convoys & movements strapped for *any* large-ish craft. I find myself leaning toward the latter. As for big hangars on superdaggers, that does seem like much less of a compromise than Neb-style design, depending on your murderwedge’s role & how much attention from peer-tonnage foes you can expect.

In my head the Neb-B was never an Imperial design. Whose design, I really don’t care but it’s an Alliance vessel. With the big prow turbo laser it’s stand-off sniper, using range to deliver punches while starfighters get in close and mix things up. But back to our current murder dagger, I just think it’d be cool to have a “mirrored” recess in the bottom roughly analogous to the superstructure above. It’s less about practical design, more on aesthetics. I also think the ventral plane of the ship should be flatter and not trapezoidal, again keeping with the old time… Read more »

I’d be very skeptical about that main gun’s capacity against Acclamator-tonnage targets or bigger with so little reactor space for that *and* shields/engines/whatnot, but perhaps it was originally intended for picking off pirate corvettes before the Rebels started commandeering ’em.

Those newspaper strips’ line work came c/o Al Williamson, a Flash Gordon regular, so talk about aesthetic continuity. The ventral stuff you suggest also neatly parallels some of those Executor concept-sketches from ESB.

Wow. I love where this is going. I love cluttered and “busy” aesthetics, especially with lots of gun batteries. Can’t wait to see how this turns out.

Wow and I though the first order star battlecruiser was ugly enough!

But i do like the look of it because it is ugly in the good unique way unlike the Resurgent which is also ugly but in the bad boring way just a squash ISD while this one look new and bizarre which really stand out among imperial warships in my honest opinion.

I kinda like the First Order’s battlecruiser, more so than the ISD. I find beauty practicality though, so having the ISD and its massively stand out bridge tower, which is just a big ol’ target, the Resurgent-class doesn’t have that problem (at least not a big as the ISD). And it is more flexible mission-wise since it also doubles as a carrier unlike the ISD.

Eh, Resurgent’s flat bridge doesn’t seem *that* much better when it’s in the same general area as OT-style towers & still seems to take up its share of hull surface. Certainly wouldn’t throw off your Plucky Resistance Snub Squad(R) or Stalwart Cruiser Gunners(TM) if they’re fighting at Coruscant/Endor-style spitting distance & exploit a Plot-Convenient Shield Breach(R). Might give the dorsal turrets a clearer field of fire directly ‘above’/behind the ship, though. As for its carrier functions, can’t help feeling that big hollow bow could use fewer random brim-trench support struts for pilots to thread through on ingress/egress.

Any capital fire leaking through the shields is going to wreck whatever is underneath it, and 33% less silhouette gets you what exactly at 300,000 kilometers? It’s probably not the most practical shape, I’ll give you that, but the survivability complaint often leveled against the hex-module I think is highly suspect.

Yeah, after a certain point it’s less “how exposed to fire are your components if shields fail?” as opposed to “how quickly can we bug out or stop whomever’s shooting?” That said, just once I’d like a fakeout scene where somebody’s main bridge takes a wreckin’…and then we switch to the command crew wincing from secondary control. “Well then. Jump plotted?”