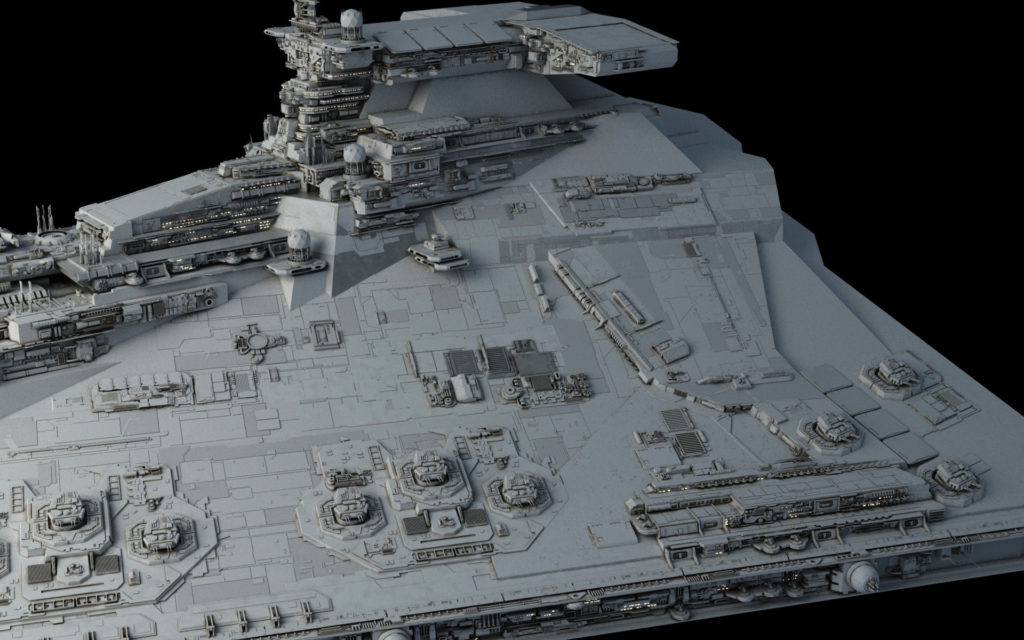 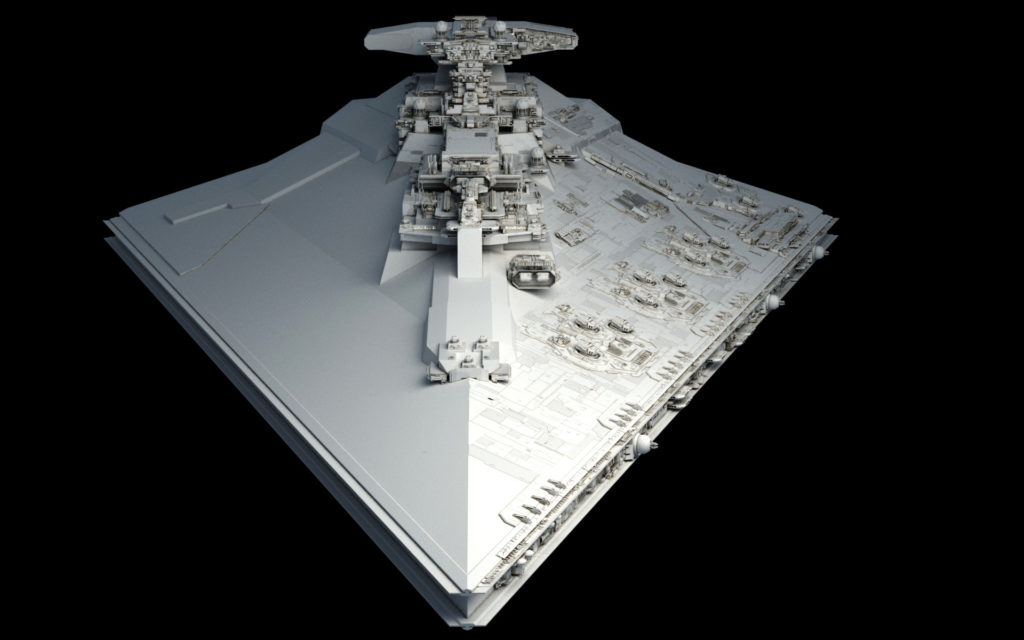 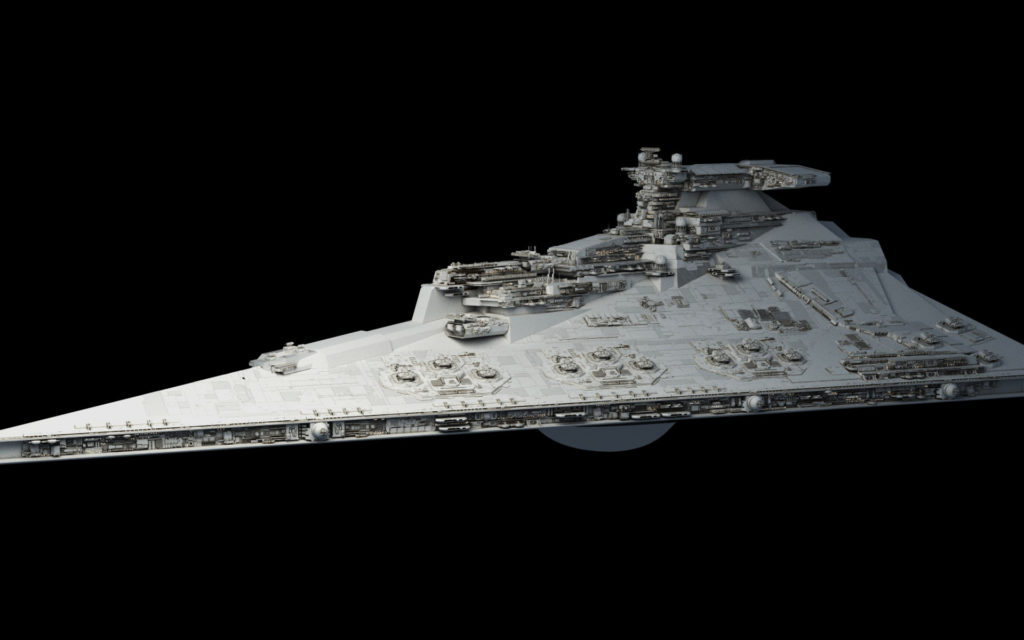 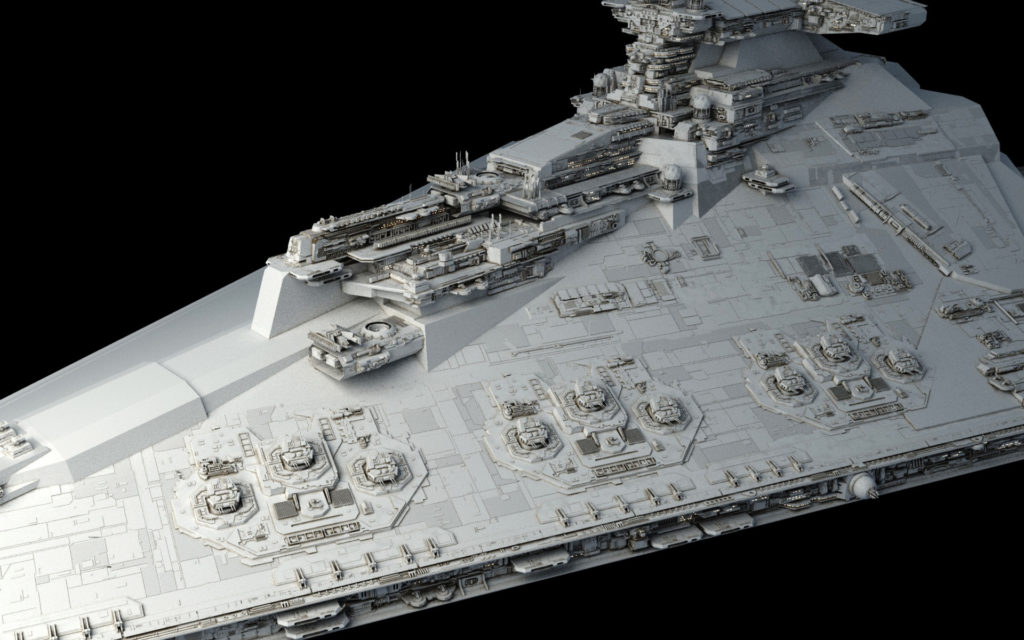 Also, have you started the thought process of naming this ship? I’m curious as to what will be this vessel’s name!

This’d be the Tagge Battlecruiser. It’s a Star Destroyer, on par with the Allegiance.

The form factor is beginning to resemble that fanon “Praetor” model that’s been floating around for a while.

Ah, you mean the one that sorta resembles a scaled-up Impstar with four sensor globes on a (proportionally) thinner, double-tiered command tower & five main thrusters. I’ll confess to a serious soft spot, and thus wonder whether you could handwave the differences between that render and Fractal’s by citing separate manufacturers (like, say, Rendili or some Old Republic firm for the ‘Praetor I’ and CEC for the ‘II’). At any rate, gotta love those ‘Warlords’ let’s play vids where they demonstrate that unfortunate collision bug by giving an Executor the kamikaze treatment (fr’instance: https://youtu.be/6UJiIWuK030 ).

Eh, I think that it’s been pretty established that the Procurator and Praetors (I,II&III) are all part of the KDY lineup. This one’s bridge module is distinctively Kuati, although it does make me wonder why they spared the Praetor II the hexagon and globes treatment.

Because they wanted to make Giel’s ship a KDY product. I just don’t agree – CEC or bust! I also say it’s 6.4km, but whatever, it just has small windows (direct scaled the model, lol). I joined the EGtW project pretty late, when the writing was basically done. Had I been there from the start I’d have pushed like hell for other major manufacturers.

The comics have tons of different variations. They could be completely different classes, or just artistic license. In the 3-5km range, I can see there being Procurator (let’s say it’s this design), Giel’s flagship (whatever you want to call it), and Wermis/Tagge’s ship(s) that are actually just variants of the same design. Procurator is a compact high-end generalist design, Giel’s ship is disproportionately well protected fleet ship (trade power for totally internal reactors), and the Wermis/Tagge design is just another Procurator variant with different superstructure or some such.

My rule of thumb for comic!SW artistic license: if they’re clearly just referencing film stills every other time a ship’s featured, don’t bother (re)categorizing any off-model snubs/TIEs/capitals. Illustrators who put a touch more thought into ship design ala Dark Empire (goofy as its personal-scale plot points were), on the other hand…

Given the ex-official status of any EGtW lore, I’m inclined to fall back on your initial stats & source company re: Praetor. And now that you mention those other two Marvel battlecruisers, this render strikes me as a most plausible Mk I Procurator to their streamlined, updated IIs (or 1.5s, customized personal flags, whatever). Dunno why I even assumed that much in common ‘tween Giel’s vessel & the other two besides size & general hull shape.

Wermis/Tagge can’t be Procurator – no reactor bulb. I think those ships, given how thin they are, with no bulb, might be quite less powerful. Maybe pursuit-type ships, and Procurators and Praetors are the fleet heavy ships.

@Fractal
Hm, so destroyer-chasers with just enough speed/teeth/shielding to moonlight as imposing personal yachts for captains of (mil-)industry. Don’t suppose ‘Eversor’ would work for a class name?