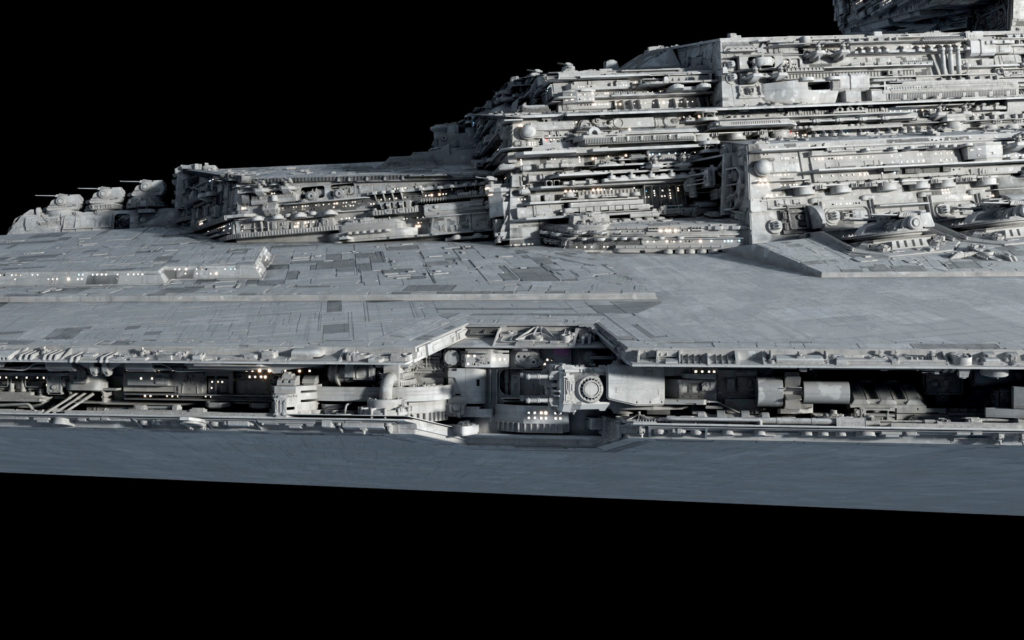 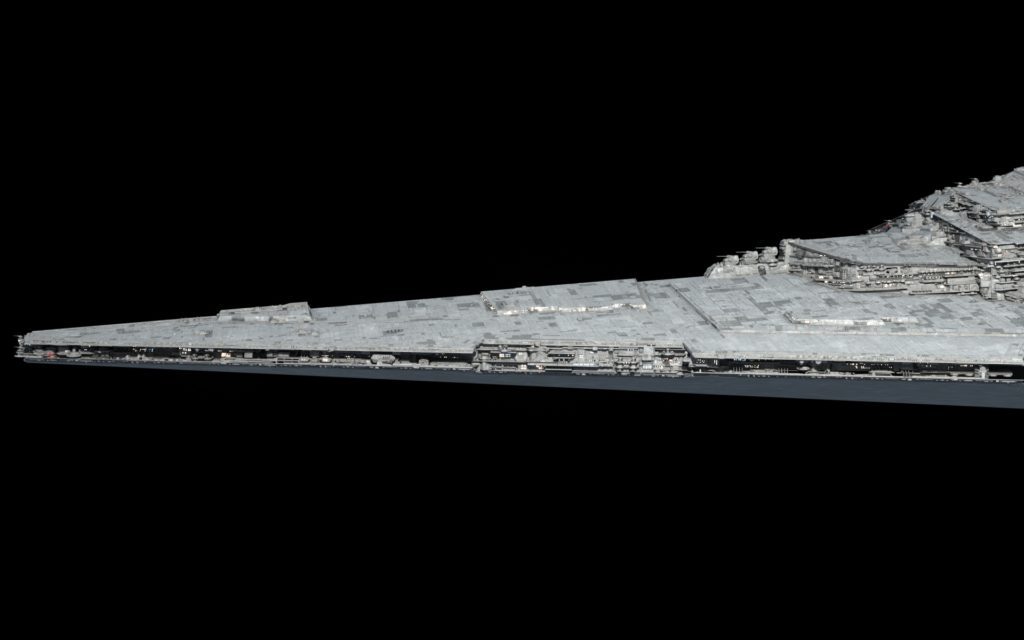 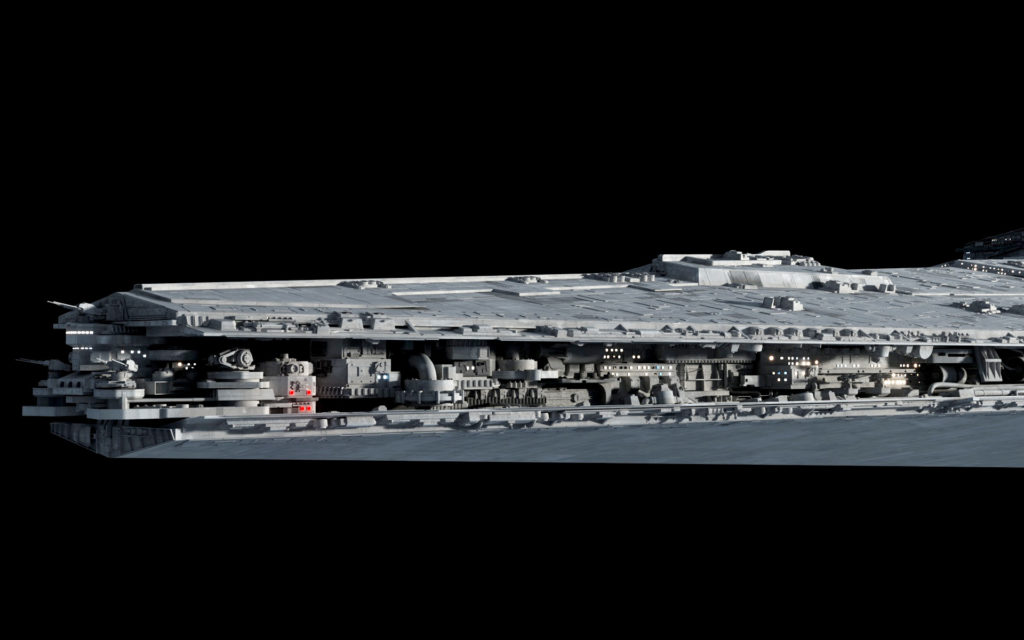 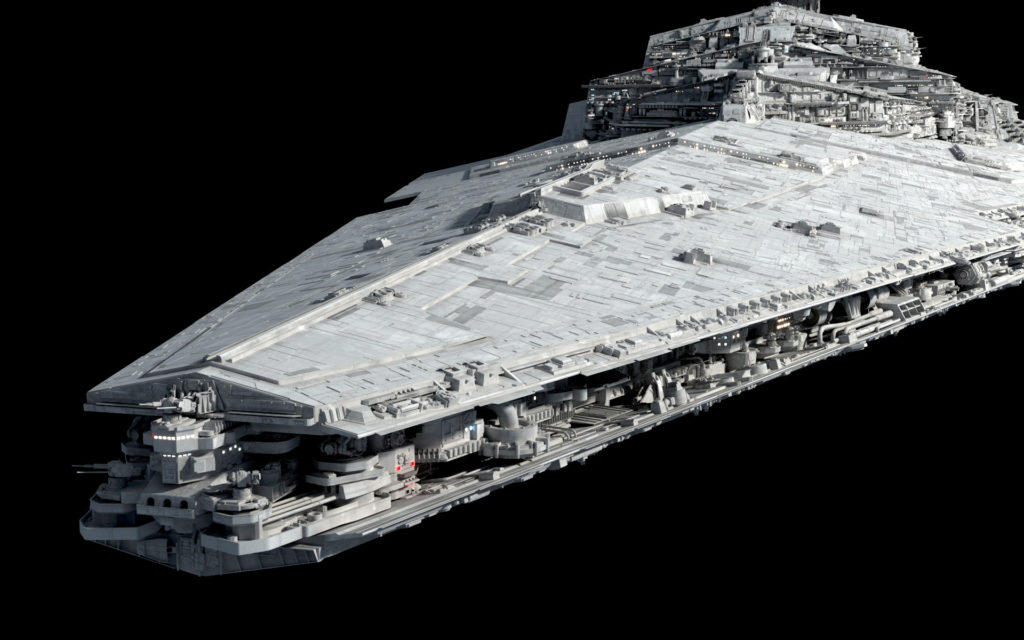 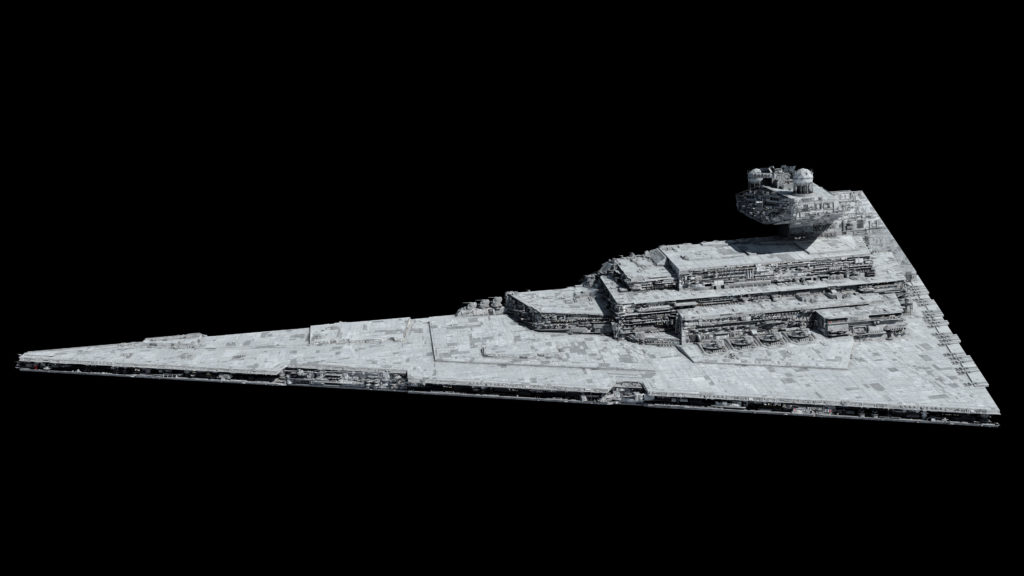 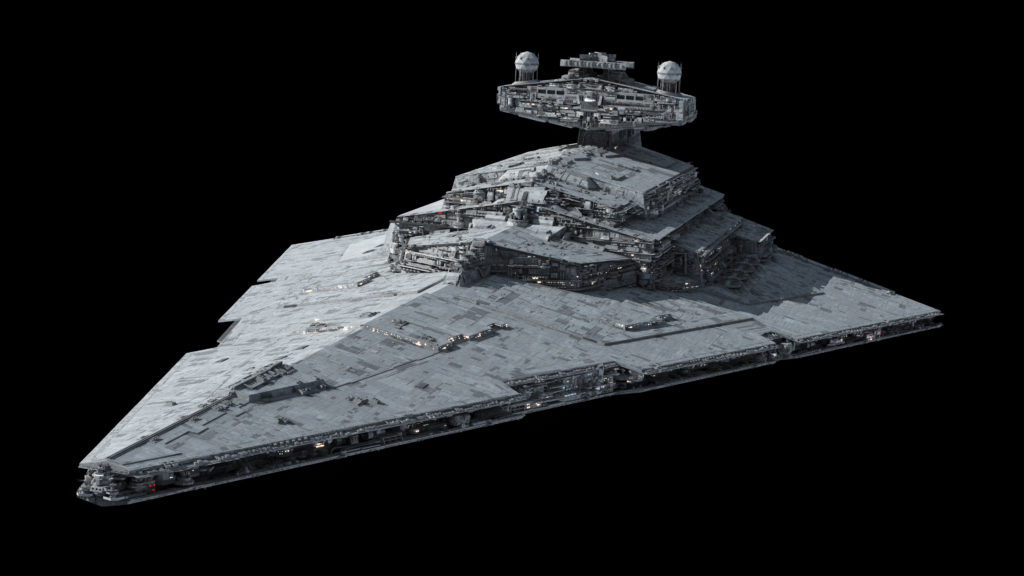 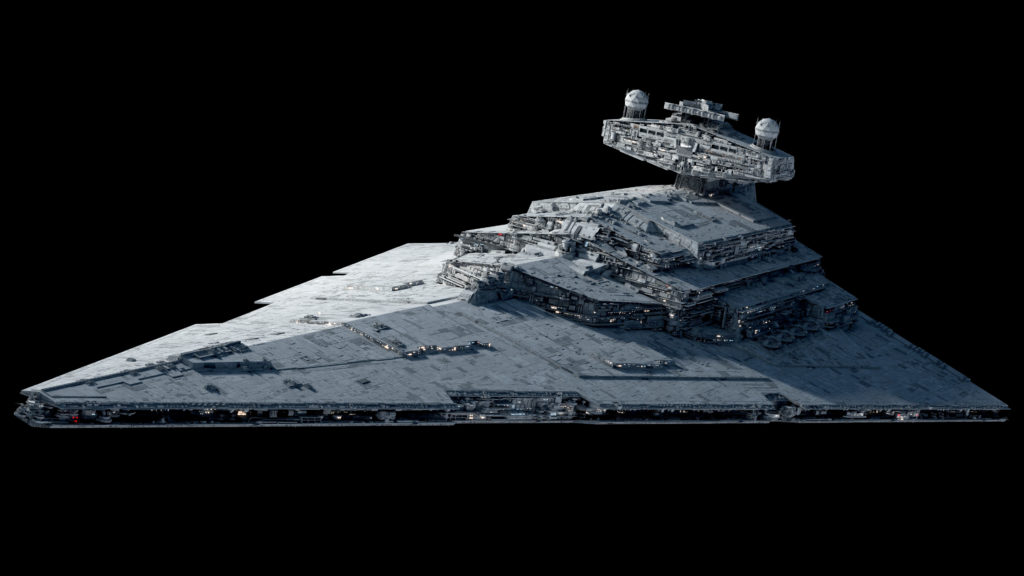 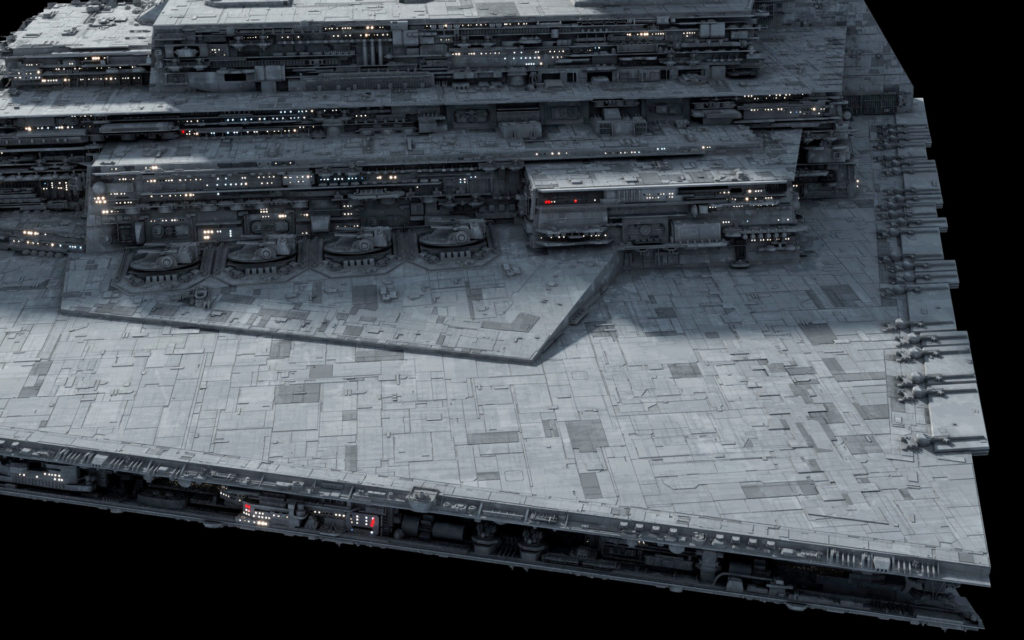 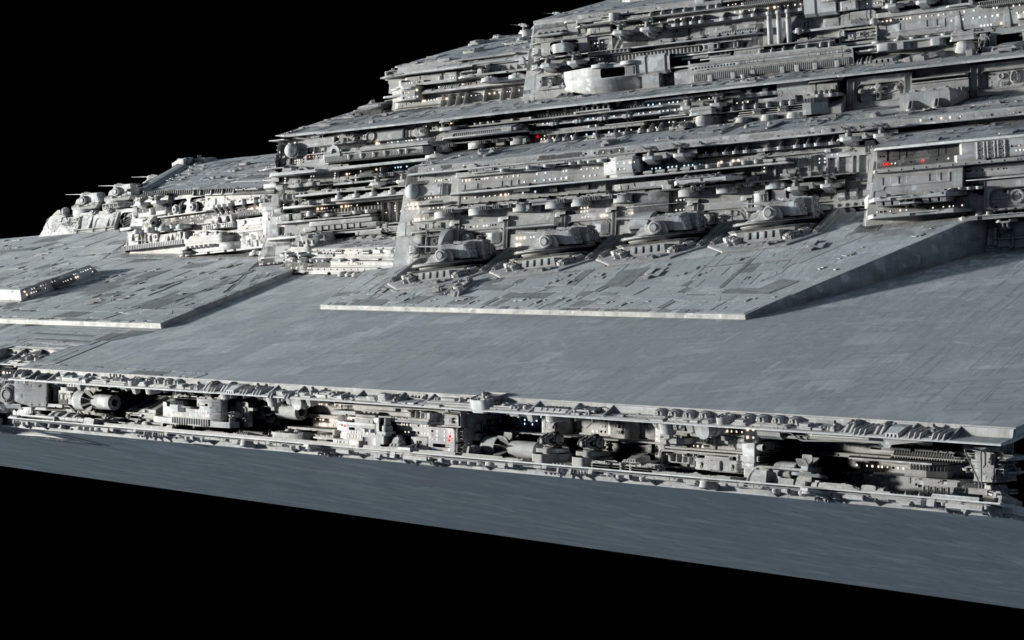 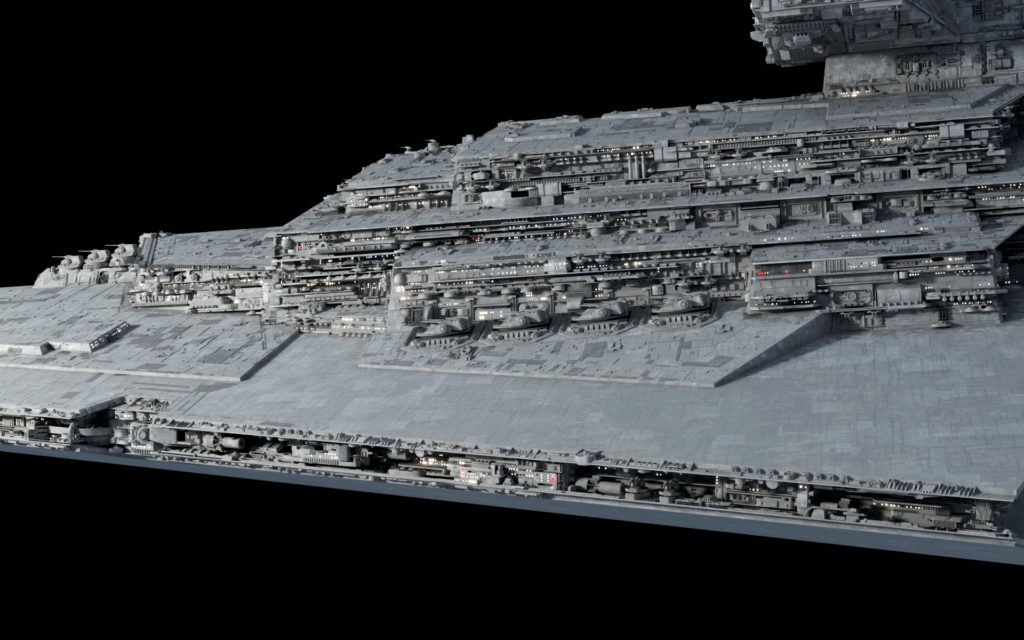 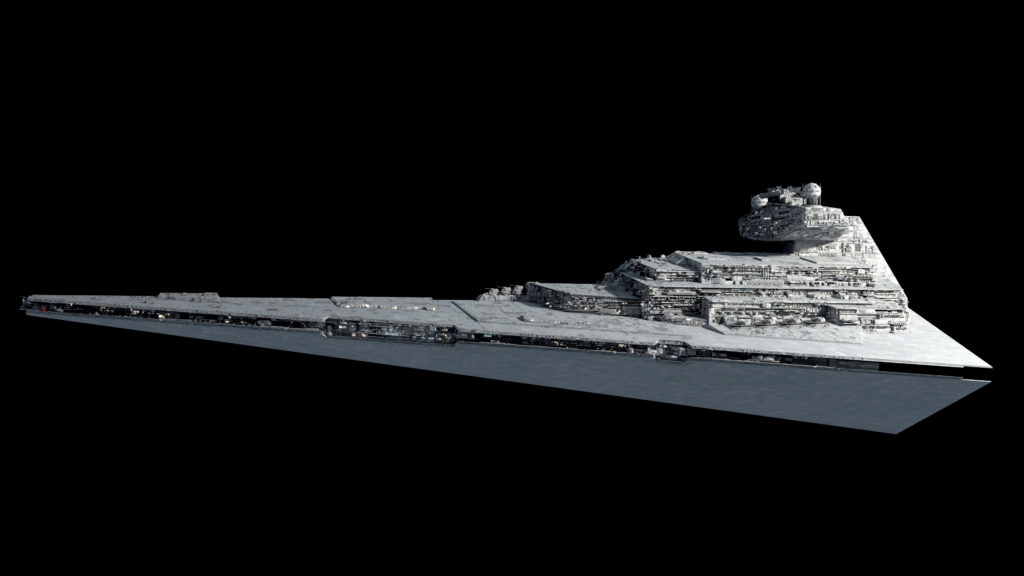 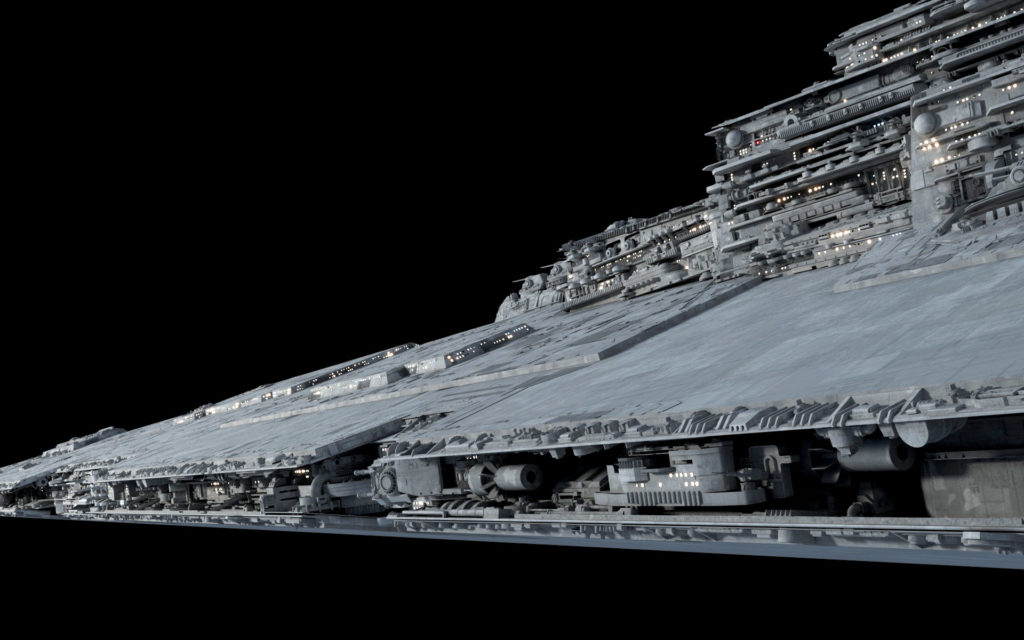 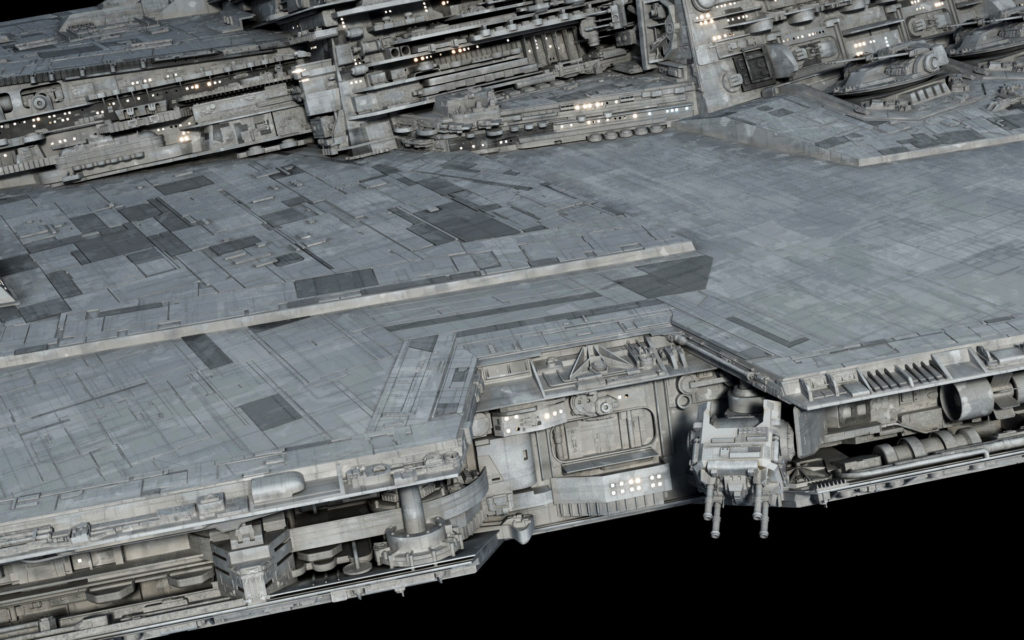 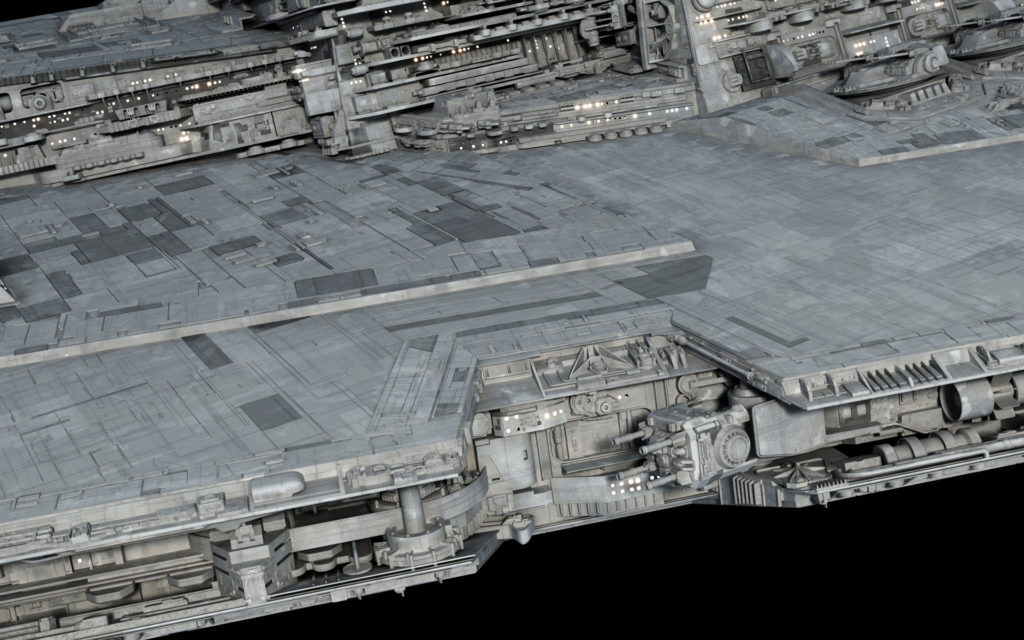 Will this ship be completed (the bottom) or is that it?

Hey Fractal. Are you planning on making a model of the LAAT gunship at any point? Or maybe some rebel ships like the CR-90 or the MC-80 Liberty?

So Fractal do you watch Rebels? If so, what have you though of the finale?

Flying space whales that can travel through hyperdrive to be exact.

Having cracked open & enjoyed those old Lando books: at least *his* star-cetaceoid pals had a bio-technobabbly means of evasion & returning fire, and were barely holding their own. The Disneyboot whalesquids just pop in at the usual spitting-distance range, cruise on in with no visible Imp reaction besides OMGWTKRIFF, & ram the guts outta Nu!Thrawn’s squadron before hauling ’em (plus Plucky Teen Jedi Protag(C)) off to fates unknown. Now, I’m not exactly a ride-or-die Thrawn fan (frankly, the guy strikes me as damn near Boba Fett-level overhyped), but…Sithspit, do I wish Rebels had reserved their main cast’s capship-wrecking antics… Read more »

It might shock you, but I don’t really care about any of the animated series.

I like (really like even!) some of the design work for new stuff to come out of Rebels, but the over-stylization, some of the deliberate design issues like star destroyer and TIE fighter proportions, and the overall serial nature of the plot just annoys me when applied to SW. I thought the same about Clone Wars as well. Good execution, but not “Star Wars” for me. Sort of how I feel about the sequels, to be honest :).

So Fractal I guess the stuff that you like in Rebels in terms of vehicles are the AT-DP, the Gozanti class cruiser and the Quasar Fire class light carrier right?

I do like all of those. I also like the tetrahedron freighter, and the Mandalorian yacht and a few others as well.

Right what about the Patrol transport?
Example: 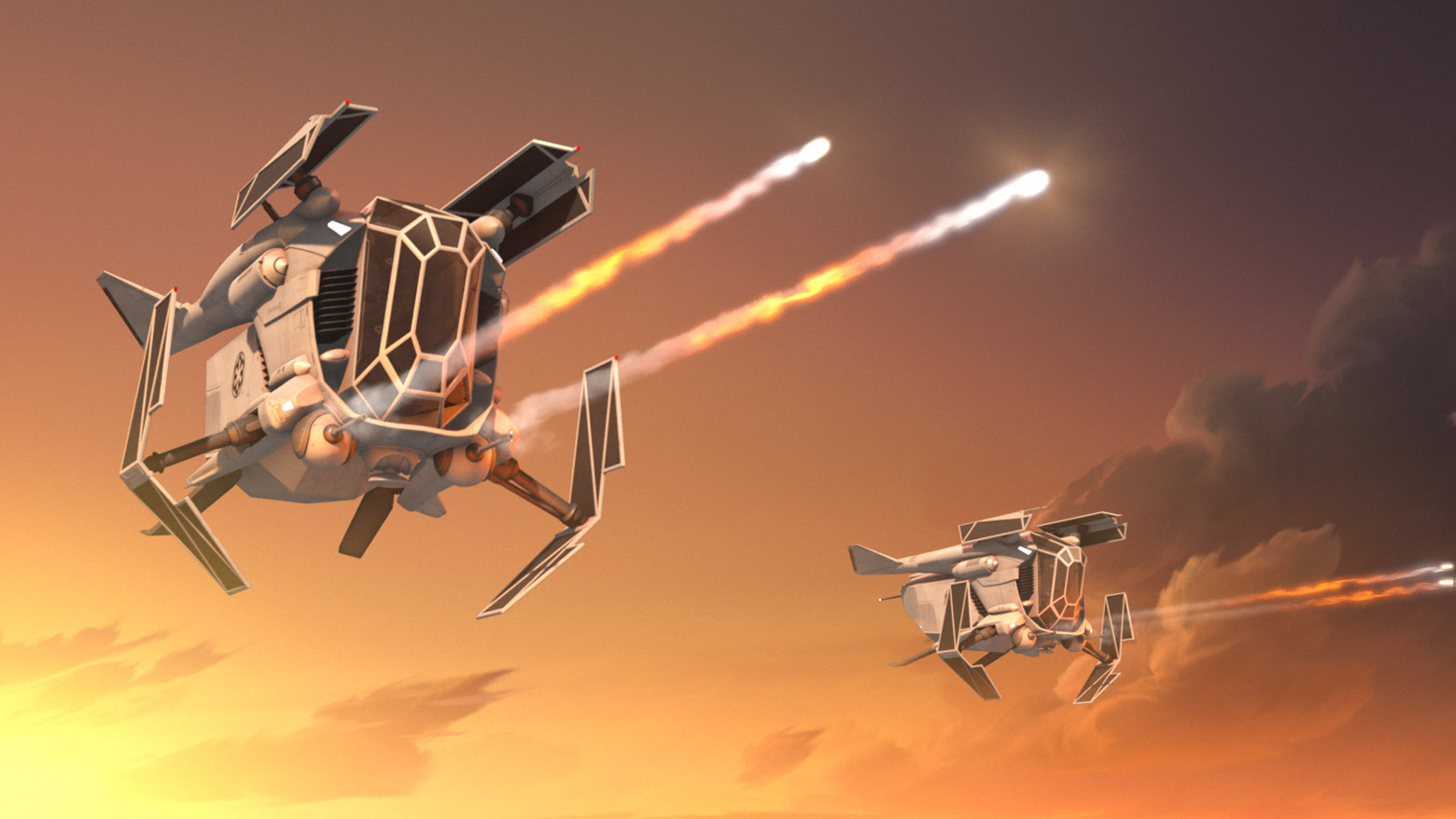 Fractal’s own Imperial gunships are both more aesthetically pleasing and functional.

The vaguely TIE-evocative panels do fit a small troop boat’s aesthetic rather better than things like the Raider corvette, but otherwise I have to give our host’s (much) better-equipped equivalents the nod.

I’m somewhat partial to the Inquisitors’ TIE prototypes & that Wookiee gunship, so far as show-original craft go. Those Mando protectorate fighters would also make the list if their wing-rotation attack mode didn’t seem so goofy. Ghost itself coulda used at least 2-3 more large engine pods, though the parasite mini-shuttle was a neat concept.

Whoa-that’s nice detail as per usual! Just the ventral surface and this beauty is done! And it took me a while to find the quad trench guns everyone is talking about- but when I do see it, it makes me oh-so-very-happy at estimating what destructive capabilities it is capable of offering!

You know of all the CIS ships that I see one of them I was not sure have any use and that is the supply ship: 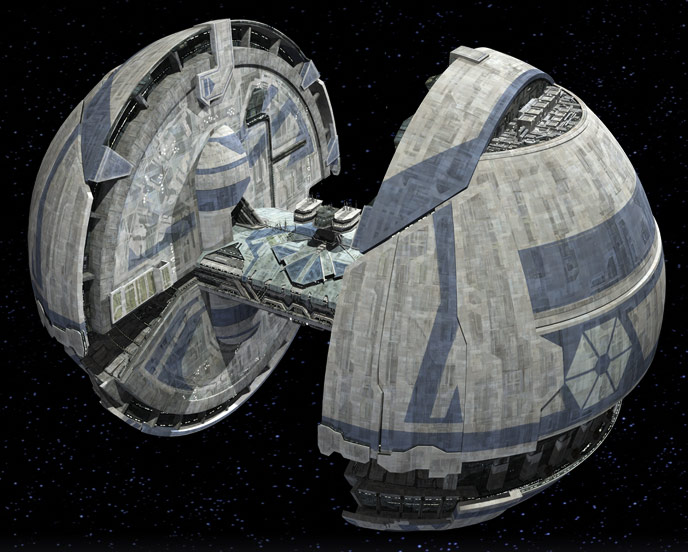 A lot of CIS ships and ground vehicles use munitions.
Their warships almost all have flak cannons, Hailfire droids use missiles, HMPs use missiles, Vulture Droids and Tri-Fighters use missiles, AATs use various forms of torpedo, Hyena Bombers use proton bombs, etc. All of these need their munitions replenishing somehow.
There’s also the fact that these supply ships have been used to relieve besieged cities.
There are many potential purposes, both directly military (munitions supply, food and water for organic troops in certain campaigns) and civilian (relief supplies during/after a campaign), for such a ship in the CIS.

Well true but the Lucrehulk does that job better while carried either way more fighters or supplies due to it’s huge space that is available especially the latter due to the fact that it was formerly a super freighter and it is much larger at around 3 km in length and width while the supply ship is just around 1.2 km in width and 900 m in length and height.

After all LH-3210 was design to carry enormous amount of cargo. More then 25 milion of metric tones alone.

True, but so was the supply ship. Both started out as commercial vessels before the Clone Wars, and joined the CIS Navy at the outbreak of war due to their owners siding with the CIS. The supply ships could not be easily converted into front line combatants and so continued to move cargo. The Lucrehulks, on the other hand, were already Trade Defence Force battleships, leading to them being upgraded further and used as front line combatants throughout the war. It was, essentially, a case of “we have thousands of each of these two types of super-freighters. The smaller ones… Read more »

What are you using to render these?
I recently started using Corona render, unbiased, fast, and it’s just perfect for spaceship renderings! (the special AO map works as a procedural edge wear, there’s bloom, edgesmooth effect for greeble )

Sorry for being a noob, is the Imperator class the one from the TESB? I Don’t remember those middle turrets, or is it a special class? Because other than that it looks exactly like the TESB version.

Where are the heavy ventral turbolasers? I’ve tried to scour Star Wars Screencaps but can’t find anything prominent on the ventral surface other than the triple mediums ahead of the main hanger.

there are 3 big cannons on the Rouge One star destroyers, and after looking at the New hope star destroyer studio model, there are tiny cannons there, but they are one little mold, barely visible.

I feel that the top side hull is missing a number of medium dual Turbo Laser Batteries. But aside from that? Probably the most detailed Star Destroyer model I’ve ever seen. Fantastic work, Fractalsponge!

Fractal I think you miss the detail spot around the 3 axial triple heavy turbolasers or is it meant to be like that?

Maybe I’m not looking at the right area but it looks fine to me.

Here what I’m talking about on the top right corner: 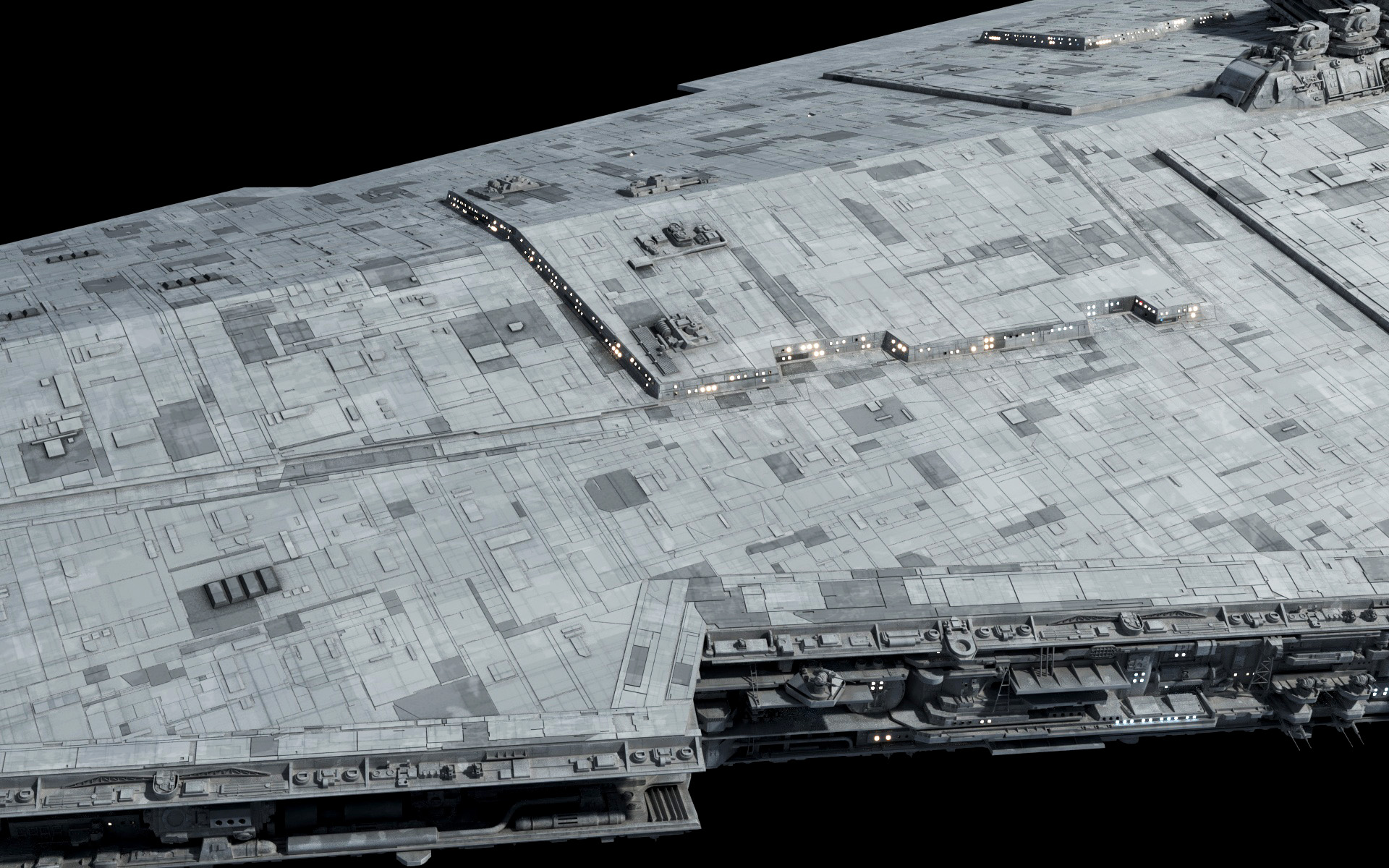 When I meant details I meant the surface greebles like the lines, dark patches and small bumps.

There’s some subtle panel lining over there

It looks amazing so far. Can’t wait to see the final product when it appears

Did you take some of these pictures at different times? Some detailing near the turbolasers is shown in some images but appears to not be in others. Or is it just a light trick?

How useful/limited is the firing arc of that trench quad HTL? If a ball turret HTL had been in that placement, like on the Allegiance-class, would the firing arc have improved at all?

The trench quad heavy turbolasers have an approximate firing arc of around 90 degrees, oriented to the bows. Fitting, seeing as how the ISD design itself is intended to be able to focus all of its firepower to fore while still presenting a minimal profile to the enemy. A ball mount, while it would improve the firing arc, defeats the purpose of the design, and takes up too much space; it would block weapons mounted sternward of the weapon from firing towards the bow. In order to utilize a ball mount, it would have to be mounted “deeper” in the… Read more »

Yeah the ANH model had it in this position but the articulation was unclear. I definitely think it is a situational use mount – more for when the destroyer can safely line up bows-on and unload. Limited usage in the normal evasive pattern where I imagine the main destroyer is kept to the dorsal arc.

Perhaps the trench quad is primarily a capacitor fed weapon designed to achieve local shield burnthrough against slow/static targets like Lucrehulks or planets. By the time of the Galactic Civil War, I could see fed-up captains having the mounts removed to save on maintenance time and credit costs due to the lack of available targets.

Also, did you update the site itself? Cuz it seems different… (In a good way by the way.)

Wow, the time waiting for this puppy to come out will be well worth the time! She’s beautiful!

still a WIP, man. I can’t wait either

From what I see from other comments, the quad trench TL orignates from ANH

I know it was there I meant to say why it was move to the side of the brim trench instead in the centre but I guess it was originally like that so that answer my question.