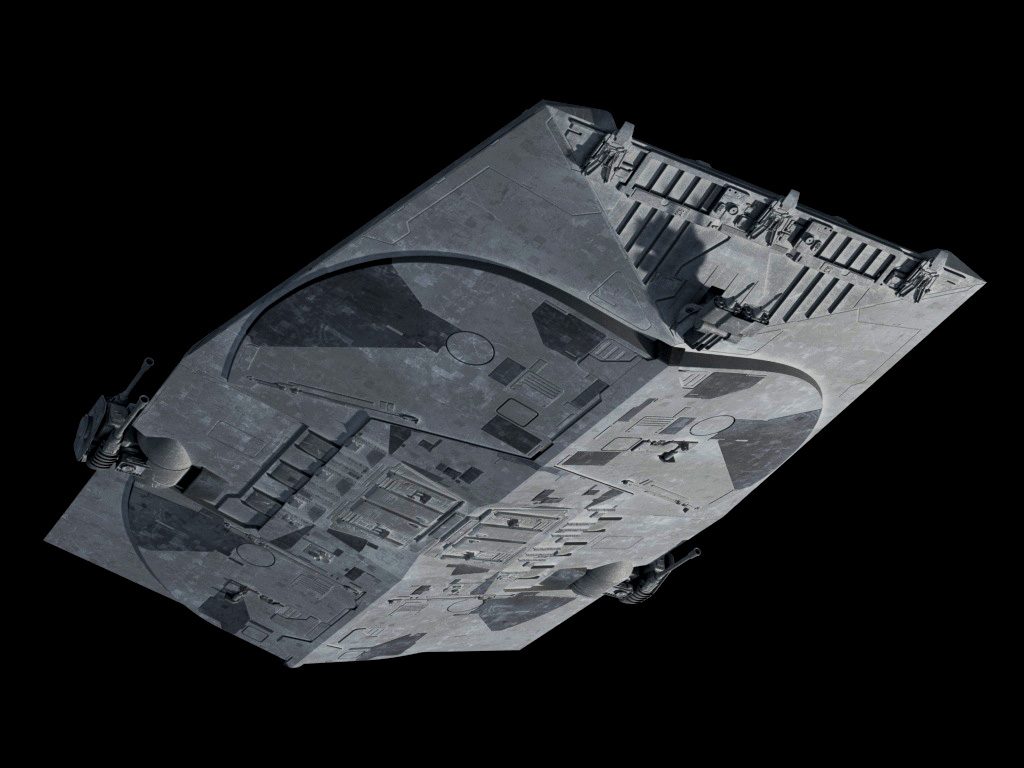 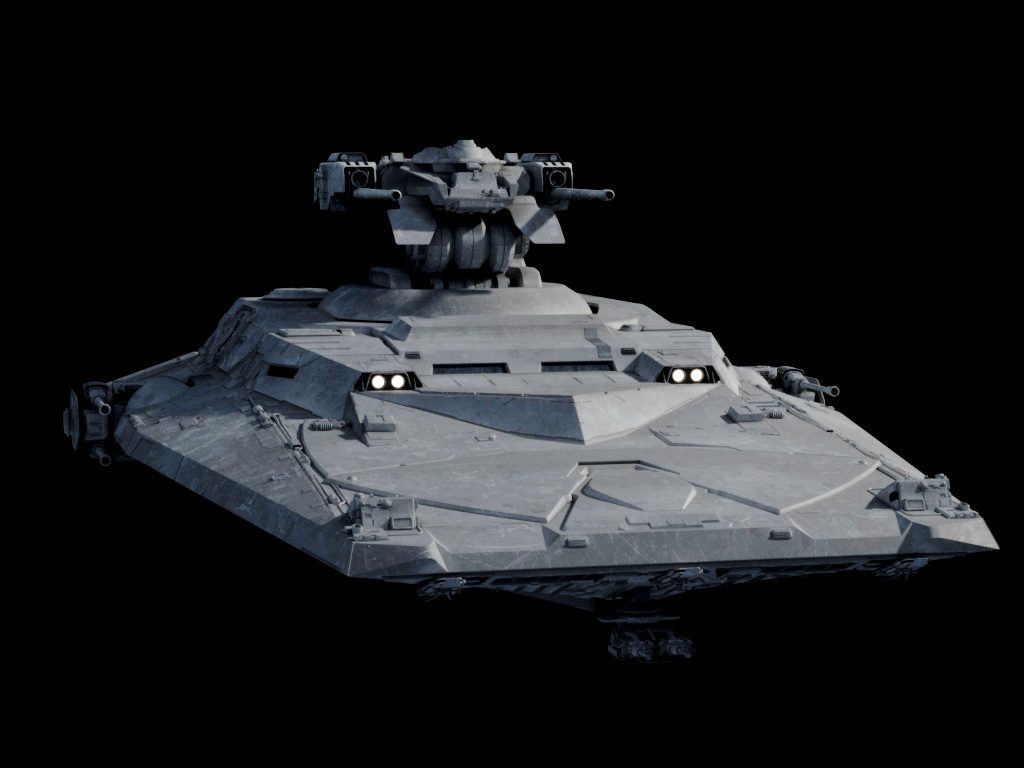 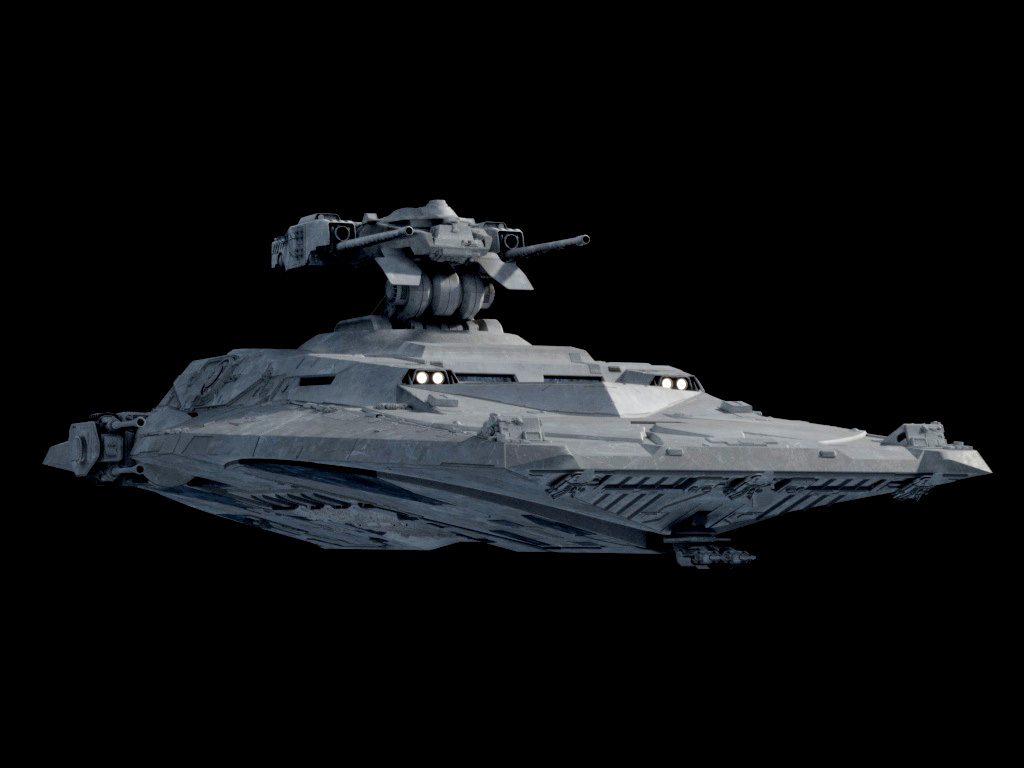 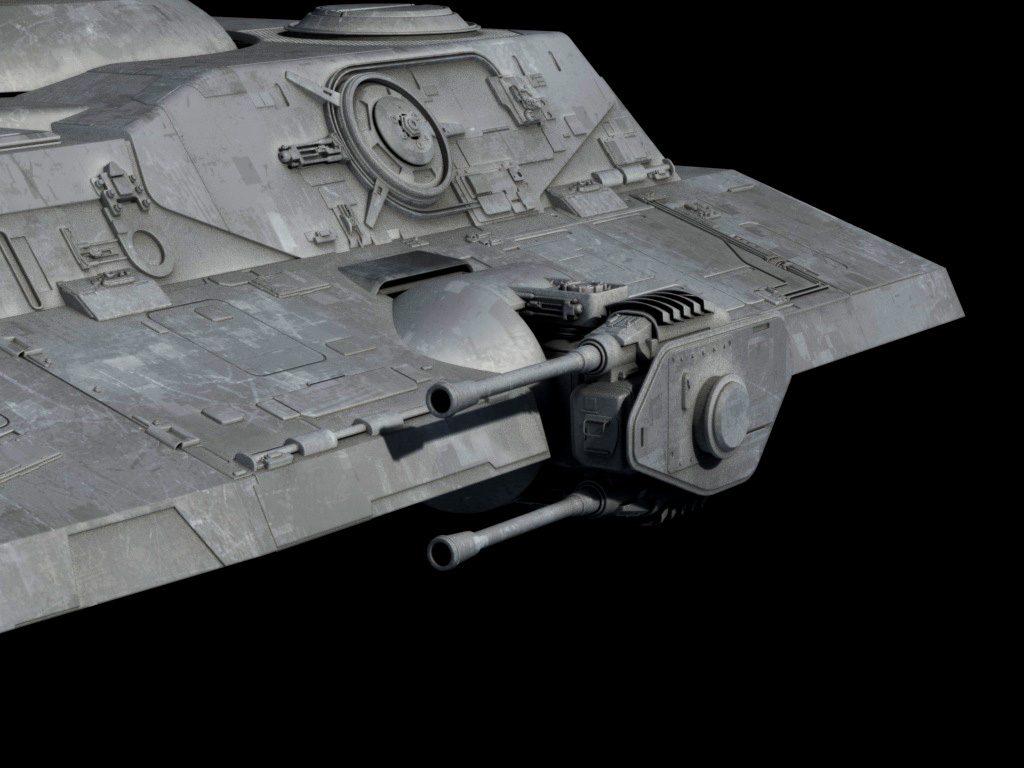 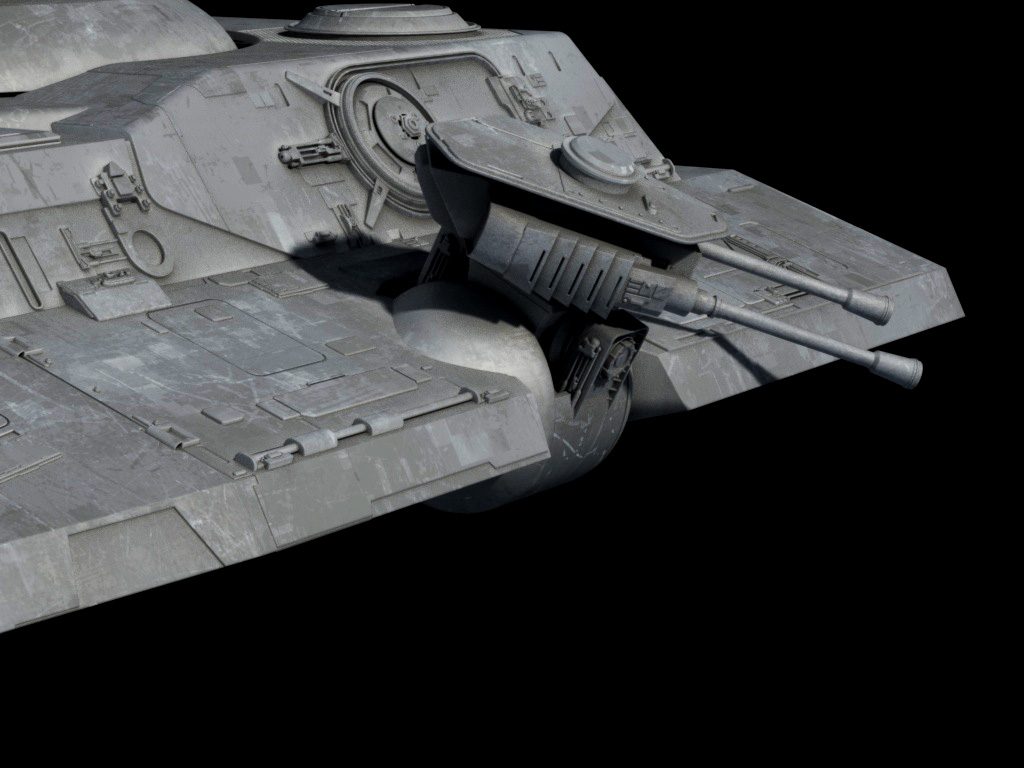 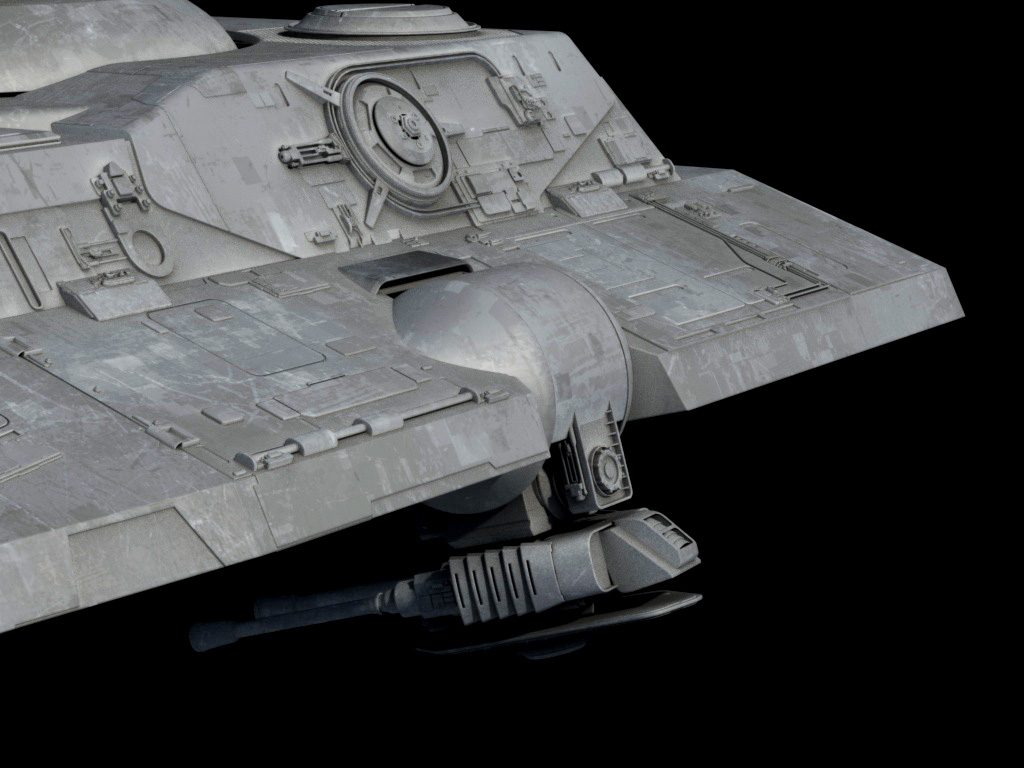 Hey, can you do the Annihilator-class super star destroyer please

First, Fractal’s said repeatedly that SSDs take up a fuckton of time, so he probably won’t for a while. Second, “annihilator-class” doesn’t exist, the Annihilator’s just an Executor-class.

Pretty sure Fractal’s going to be driven crazy by all the ridiculous ship requests before the year is out. Let him do what he wants to, or give him money to make him do what you want to. Don’t just request stuff without incentive for him.

Plus if Fractal is going to make the Executor he said it going to be either: 1) a clean low-poly version that will only work for distance shots 2) a balls-out 300 million polygon no-holds barred computer killer As for the Annihilator I found some facts about it, in legends it was use by Admiral Gaarn and after the Battle of Endor he was send to pacify the forces of the Zann Consortium (Led by the crime lord Tyber Zann who have control the Eclipse) and was destroyed in the Battle for the Eclipse (it was in the game Star… Read more »

…finally, a Disneyboot tidbit interesting enough I may have to hit up its source novel.

If by interesting you mean implausibly ridiculous to the point of suspension-of-disbelief breaking? I was able to tolerate and even enjoy the Errant Venture with the caveats they attached to it, but this is ridiculous.

It would be easier to envision Somali pirates operating a private fiefdom out of the hulk of the former USS Enterprise, stolen from right under the noses of the US Navy at Hampton Roads.

that is one of the things I truly hated about the Aftermath series. Like, what the *shit* is on about pirates capturing an SSD?

…honestly, the sequels & recent SDN discourse may have horribly eroded my verisimilitude odometer. Given the precedent set by CIS member polities, Impstar-tonnage ships don’t seem quite so bank-breaking as the X-wing books portrayed, but a presumably intact Ex? You’re right, at best this is half a notch more plausible than EaW’s ‘Tyber Zann hijacked the Eclipse ’til he got bored’ garbage.

At least Tyber Zann had the resources to run a galaxy-wide cartel that could field, and engage, entire fleets. This new Aftermath shit…not even that veneer of plausability. Tyber Zann is less Somali Pirate and more Russian oligarch/Mafia leader who manages to buy missile destroyers in his spare time.

I was fine with Legends giving undermanned heavy metal to a corrupt rogue operator like Zsinj in the chaos of Post-Soviet… I mean Post-Endor, but Zsinj at least had some claim to sovereign executive authority, the rank to back it up, and an industrial base to support it. Tyber Zann and this Disney Pirate have none of those things. For all of its sins, Empire at War only had Tyber briefly at the controls for 20 minutes, mostly to secure some files stored onboard instead of making it his roaming Cartel of Corruption ® headquarters. The new canon takes this… Read more »

Does this mean Snoke is Gorbachev and Kylo is Putin? /s

I could see some privateer group trying to sell a salvageable battlewagon’s coordinates ala that ship-dealer dude from the Thrawn trilogy, but to directly Tortuga one up (intriguing as I find the visual) you’d likely need an organization comparable to at least one Core system or a fair chunk of the CIS’ total assets, and thusfar the Disneyboot’s slant seems too minimalist for such a coalition to pop out of nowhere. Unless, of course, Abrams opts to chuck another mystery curveball with Ep 9.

I was under the impression that Imperators would be substantially more expensive to operate than CIS droid warships simply because you had to actually pay people to perform tasks that inherently and intentionally difficult to automate. Instead of this being a flaw, from a political standpoint I could see Palpatine telling Kuat to purposely make Imperial warships manpower intensive. After all, the Empire controls the vast majority of population centers, indoctrination and propaganda are cheap, and you wouldn’t want any potential rivals and renegades to be able to easily/cheaply operate stolen or defected fleet assets. Kuati hardware also seems substantially… Read more »

OP might’ve meant this thing, which I looked up when someone else mentioned that ship name ( https://jbjhjm.deviantart.com/art/Finished-Star-Wars-Project-201432300 ). Evidently the design somehow got popular enough for addition to an Empire at War mod (I think): https://www.youtube.com/watch?v=Ur5zdnjak_E

that is ugly as sin..

So Fractal you said this repulsortank will have a crew of 6 people and 3 of those are gunners but since you added a another gun underneath the repulsortank then you would need to add in another gunner which will add up the crew to 7 right?

It may be controlled by the pilot or tank commander. If this isn’t the case, you have 3 gunners, 1 tank driver. Those we can say are guarantees. Now, there could be another gunner to fill in the 5th spot and maybe the 6th spot is the commander/navigator

or it could be handled by some sort of targeting computer. I feel like the falcon’s hidden repeater in ESB’s endor-assault must have been an auto-targeting sort. Since Han and Chewie were both occupied trying to get the ship running again.

Alternatively you could have one of the other gunners swap positions. It’s unlikely for all cannons to be always firing- especially a ventral cannon on something that may never fly more than 30m up. You pick your weapon for the target and other circumstances.

Sorry I haven’t been on in a while, cap. Magneficent piece, as always. High-end SW Ground Combat’s always fascinated me for this reason, and I’m happy to see this kind of superheavy Repulsorlift tank finally put onto the screen. I’m assuming this is what the “heavy armor battalions” mentioned in the Imperial Sourcebook would be using, perhaps alongside AT-SWs or AT-SPs – seriously heavy “you dun screwed up” moment for the defenders.

I think the sourcebook gives the heavy armor battalions S-1 Firehawks and 1-H tanks, both of which sit around AT-AT firepower.

This baby seems even heavier though. The Broadsword Fractal built has AT-AT level firepower (an ATAT chin gun, plus missiles and antipersonnel guns). This baby is basically a reactor and hull with a light turbolaser strapped on top. Even with a much lesser fire rate, it’s still probably an overmatch vs AT-AT.

Imagine if you and your computer (with this website) were teleported to the star wars universe during th age of the Empire. You’d give them all the weapons they need, in exchange for billions of credits, and your pick of Twi’leks, lol!

Have you considered placing the Imperial emblem somewhere on the hull? It seems appropriate for a tank to carry the symbol of the empire.

Hey Fractal, have you ever heard of/thought of designing a Clone Wars era All-terrain Heavy Enforcer (AT-HE)? It is mentioned in a few of the cross-sections books as being the big brother of the AT-TE and the direct predecessor of the AT-AT.

Besides, 1800 meters long is a destroyer only a bit longer than the Imperator and well short of heavy destroyers like the Allegiance.

well, no sneaking up on this guy.

just lie under about a foot of sand. maybe two. wait for the soul crushing, bone crunching sensations of the repulsorlift passing over you. problem solved.

Any chance of adding some concussion missile launchers like the TX-130?

Nice.
What’s the turret on the chin? It looks to be anti infantry scale, but previous discussions suggest that wouldn’t make sense on a heavy repulsortank. It also looks like it could be a targeting array.

If I’m remembering right, it was that a pintle mounted gun manned out of a hatch wouldn’t make sense.

Ah, yes. True. Ventral anti-infantry protection would stop hostile infantry from getting to anywhere they could do actual damage.

Wow with those side duel heavy blaster cannons have that much arc coverage that will make it difficult to find the blind spot on this repulsortank if not impossible.

Awesome, what are the two pointy things under the bow, are they anti-infantry blasters or targeting sensors? also can the main gun extend upwards of the hull for more range? It kind of looks like it should be able to due to its design. Can’t wait to see it finished!

Not sure either but I do know that they are the same guns on the front chin of the A6 Juggernaut have two of them.
Here the example: 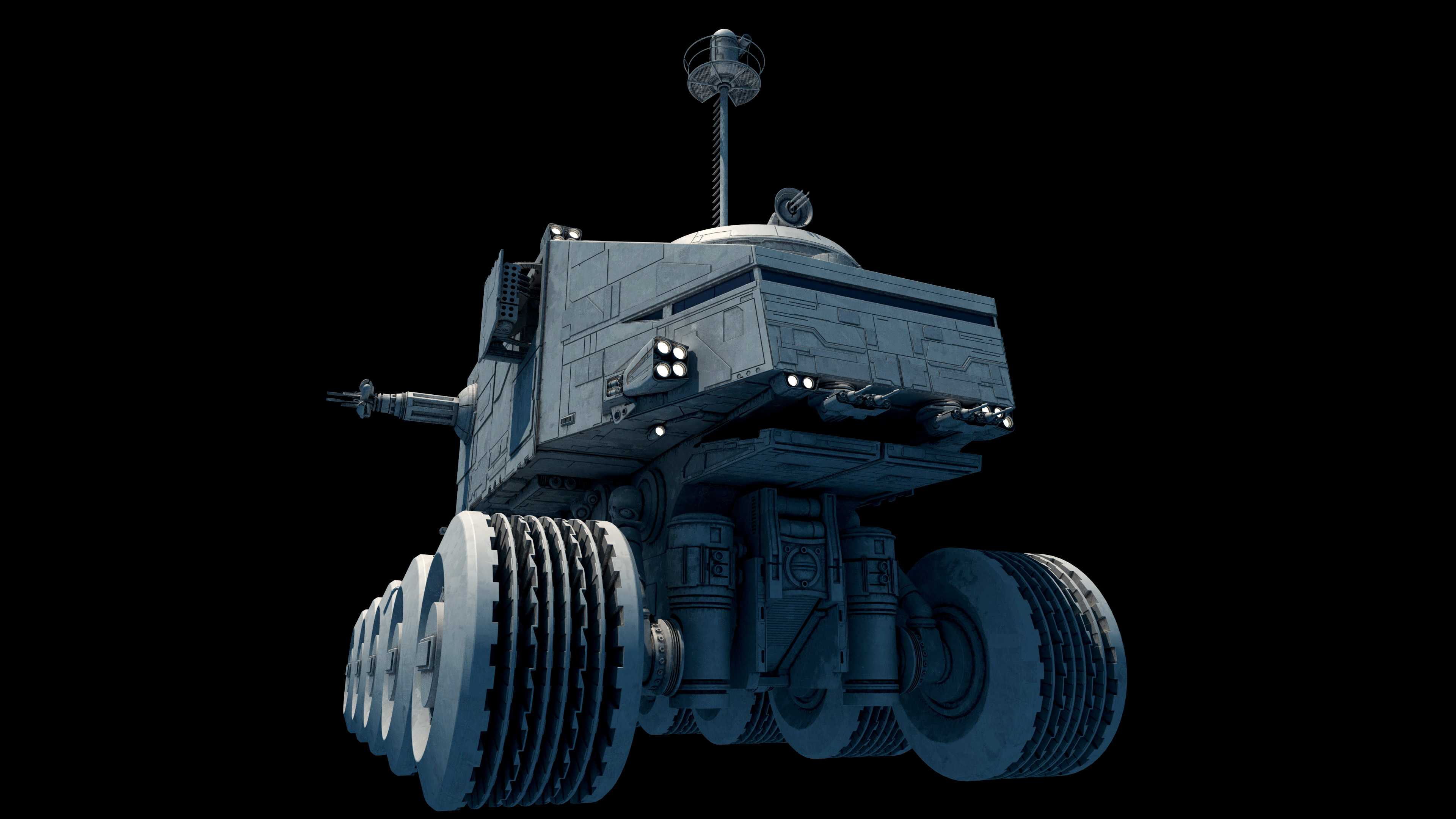 Nice, i hadn’t notice that. I suppose the tank is big enough that it floats well above a ground so a under-slung turret would be a useful feature.

Yeah and since that is the only turret underneath the tank so far then it would most likely have a 360 degree firing arc.

I’m pretty sure the ‘main gun’ are actually the ball-turret-mounted twin cannons on the sides. The dorsal-mounted turret looks to be more like anti-air flack cannons. (lighter but faster firing.)

as for getting better elevation/clearance… the tank could just increase power to it’s repulsors and ‘bounce’ above terrain. At least, according to my understanding of SW physics, it could.

The side guns seem comparable to AT-AT armament, or a TIE laser on full power. The turret guns are LTL, and are an order of magnitude more capable against heavy targets.