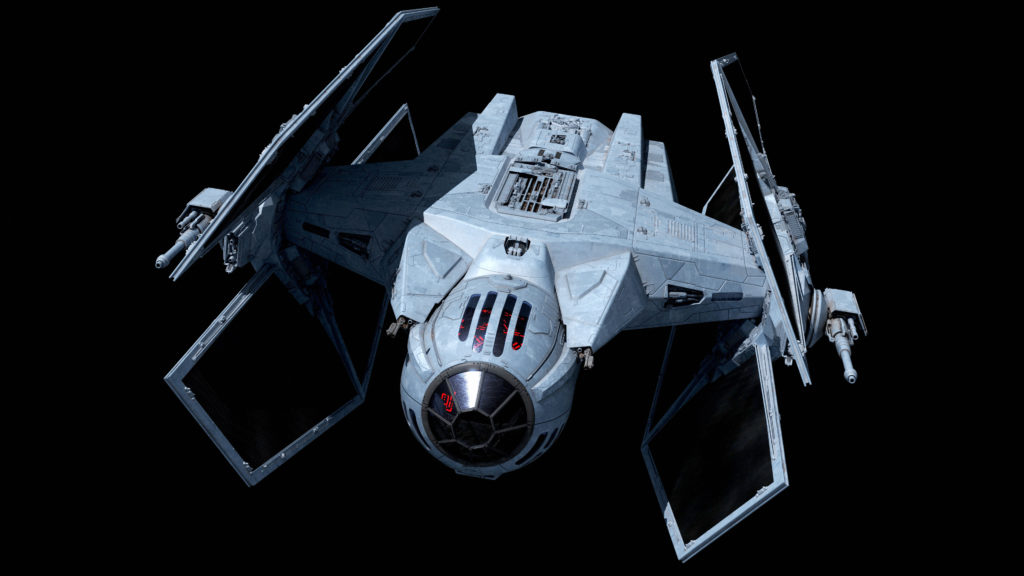 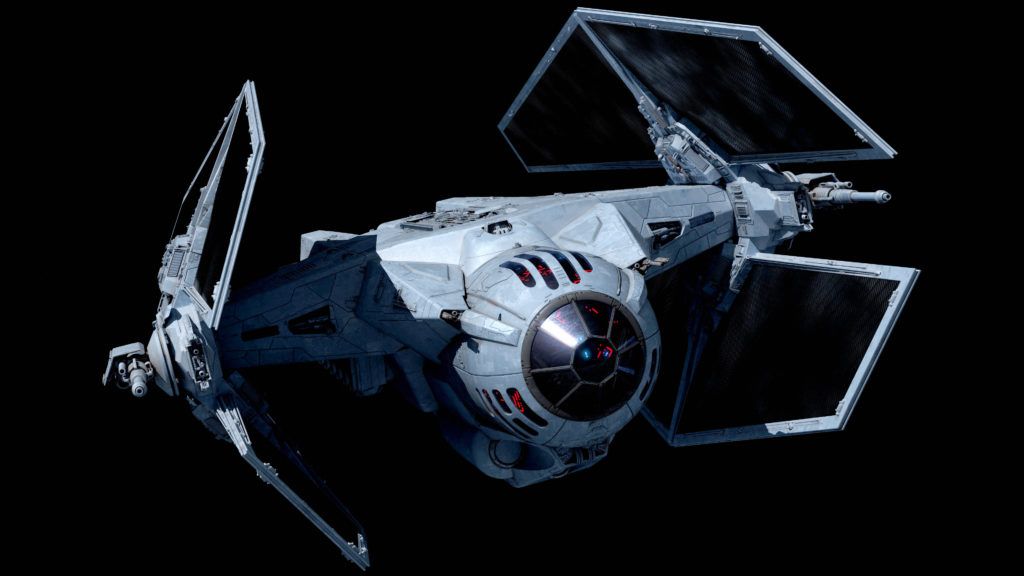 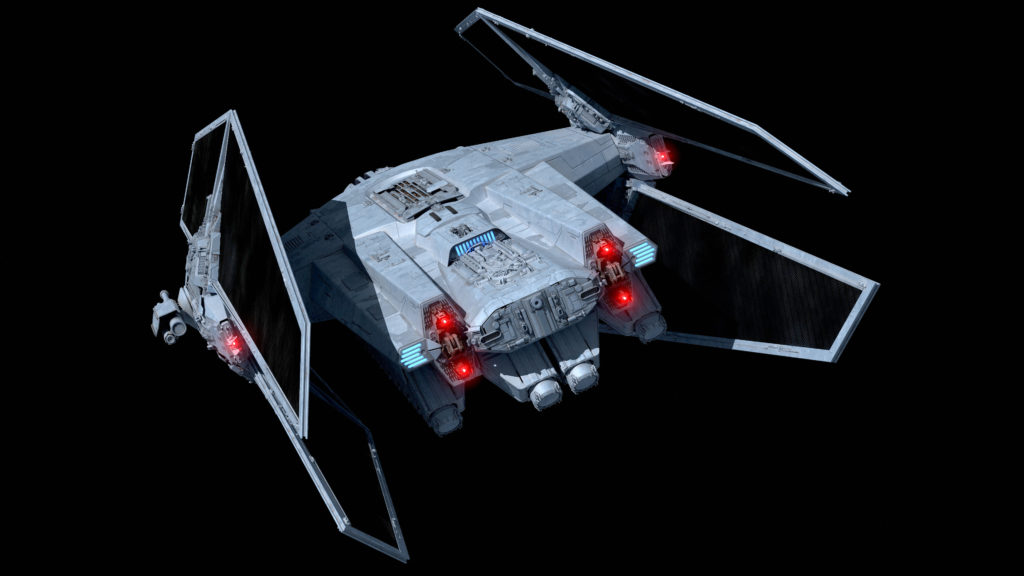 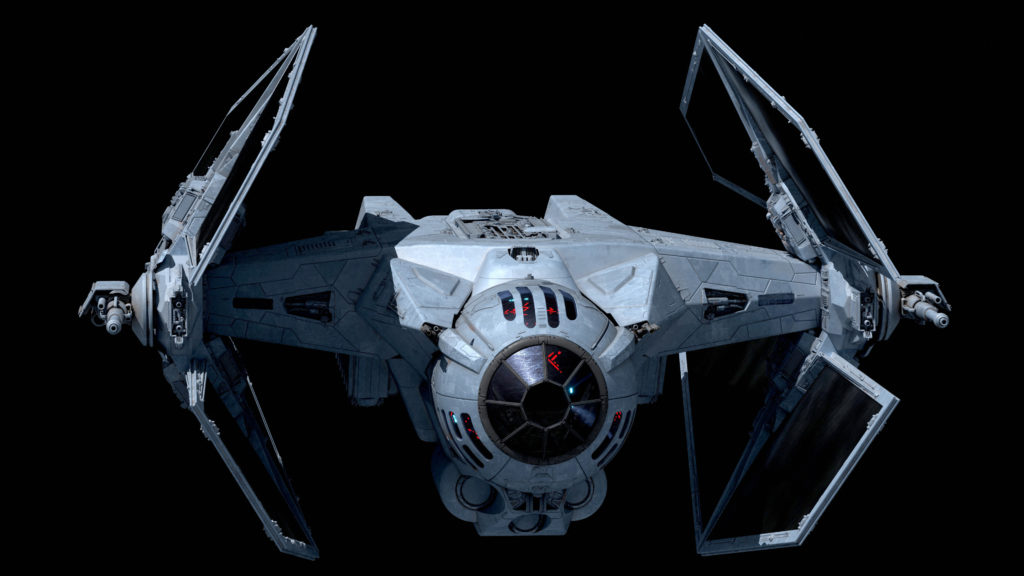 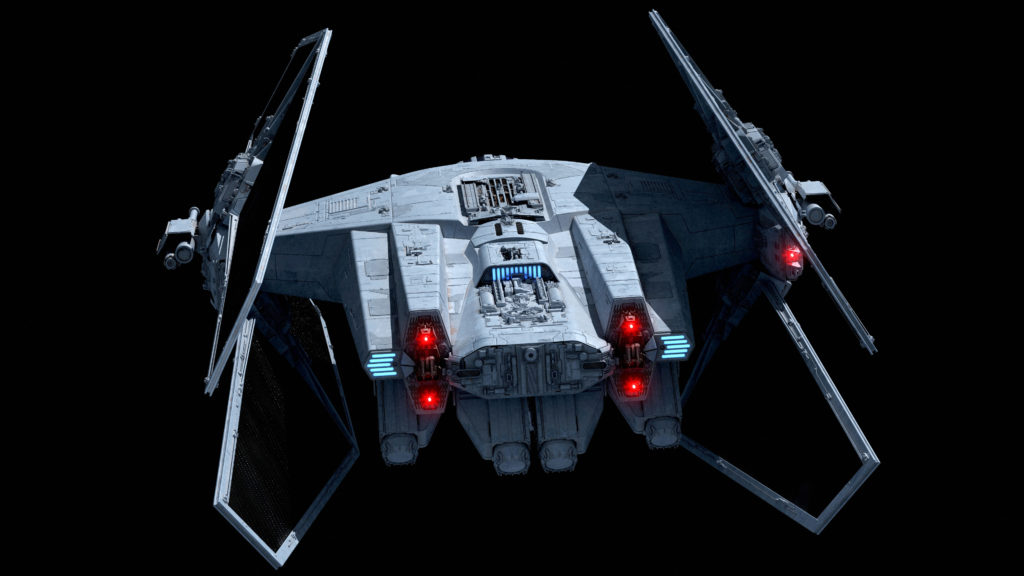 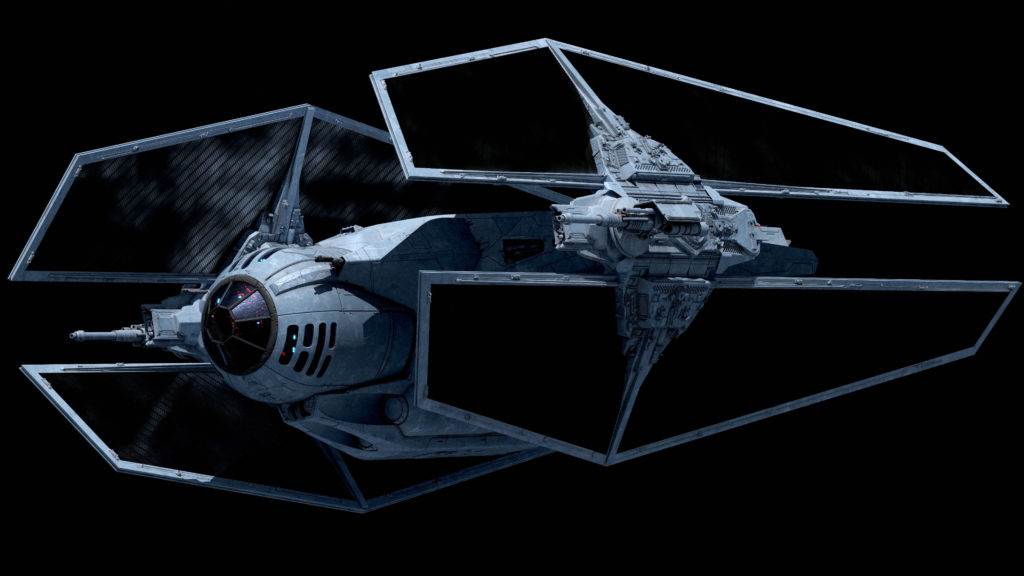 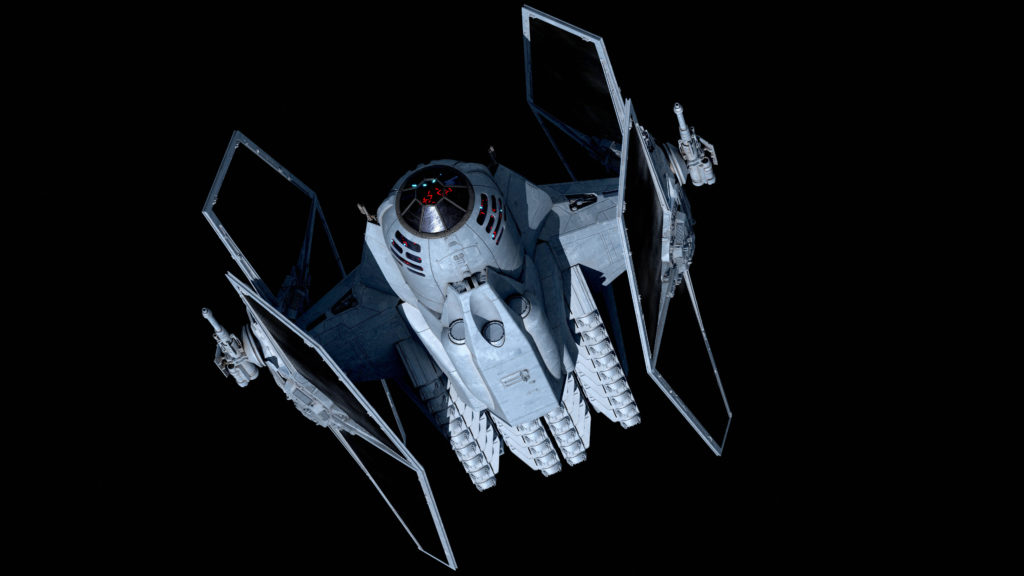 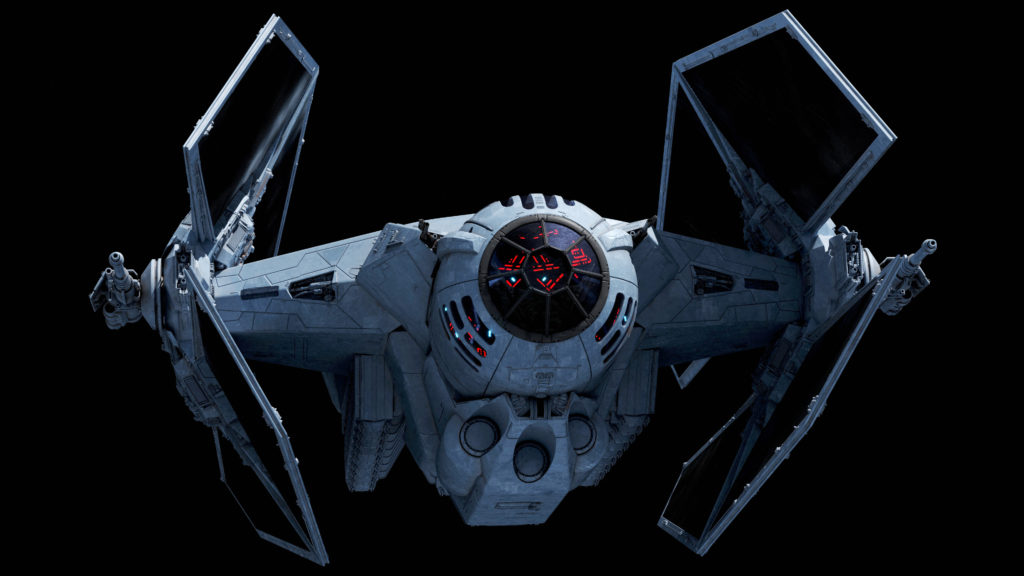 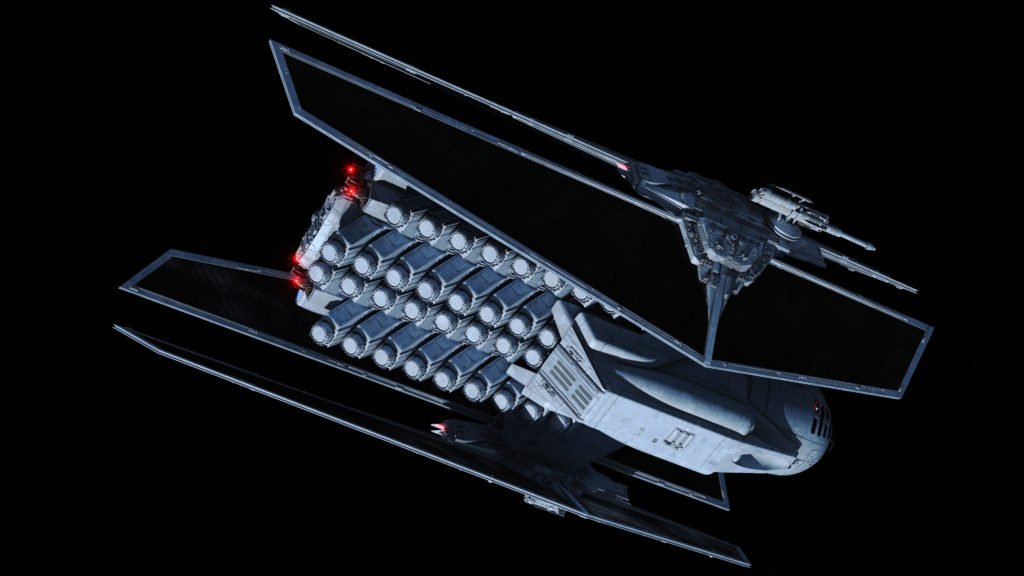 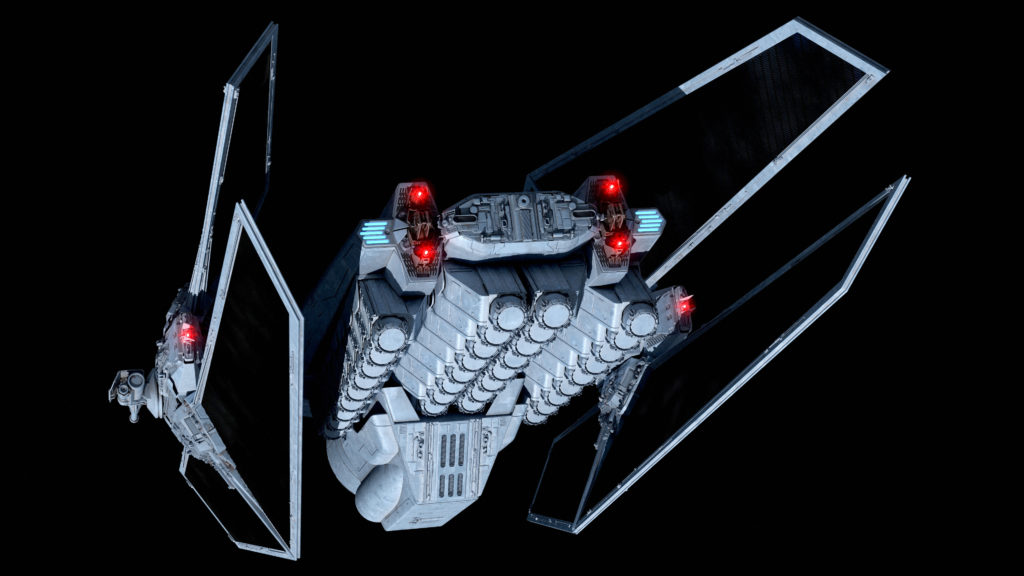 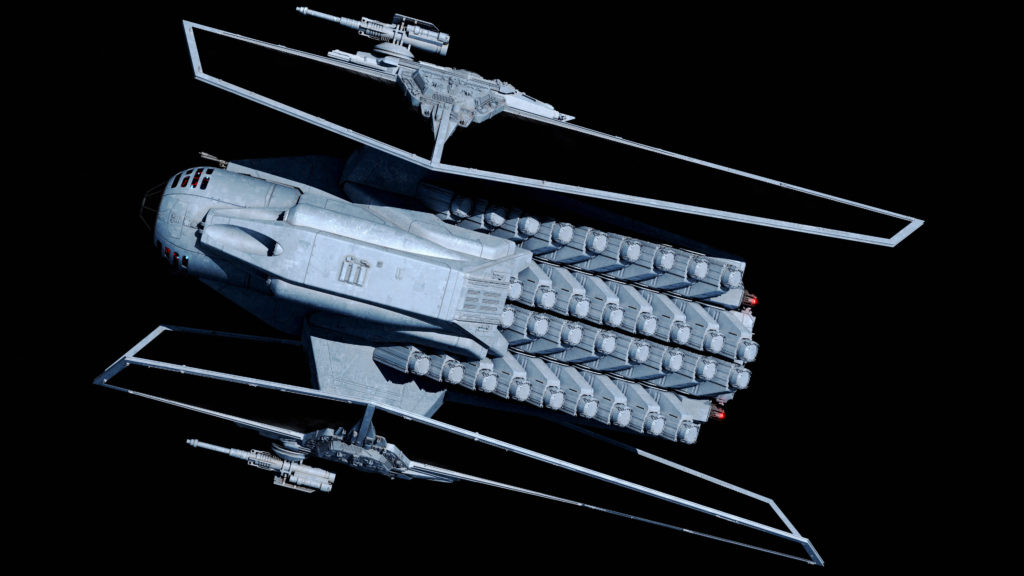 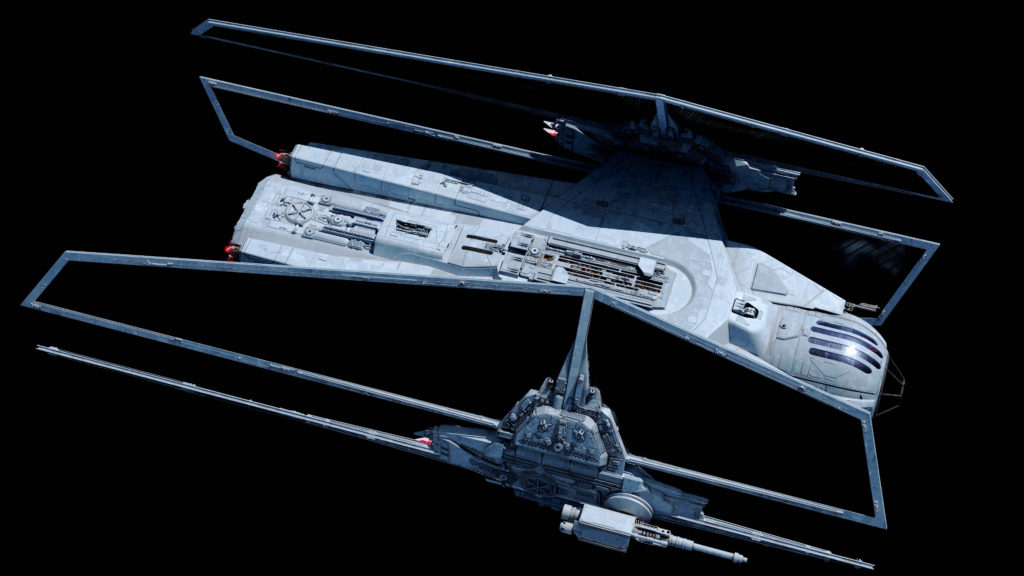 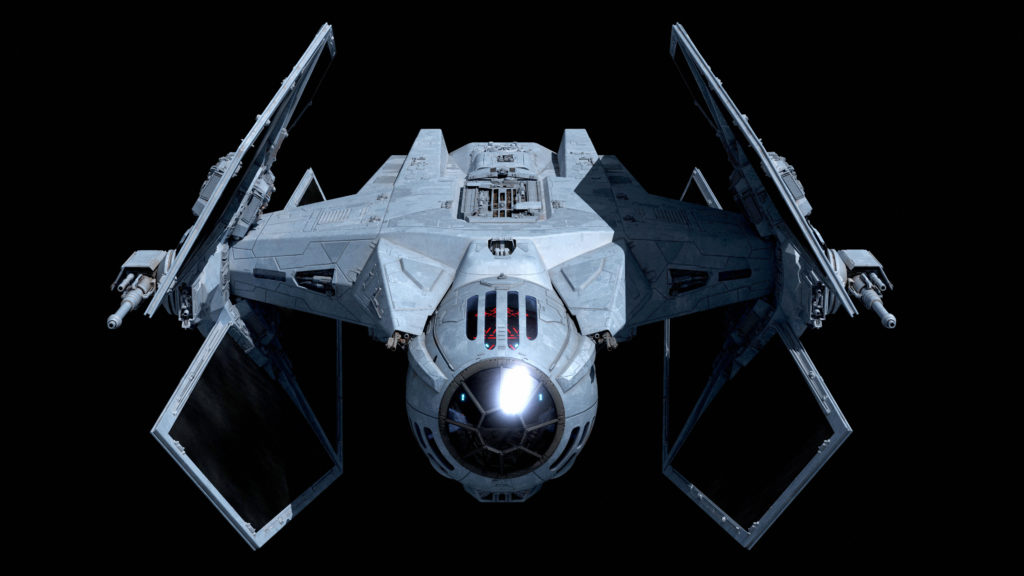 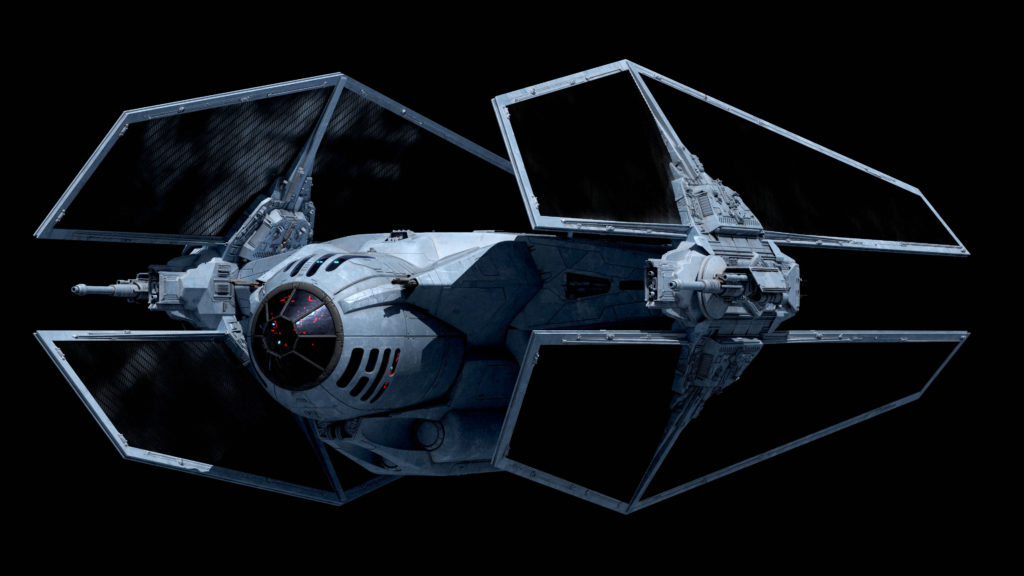 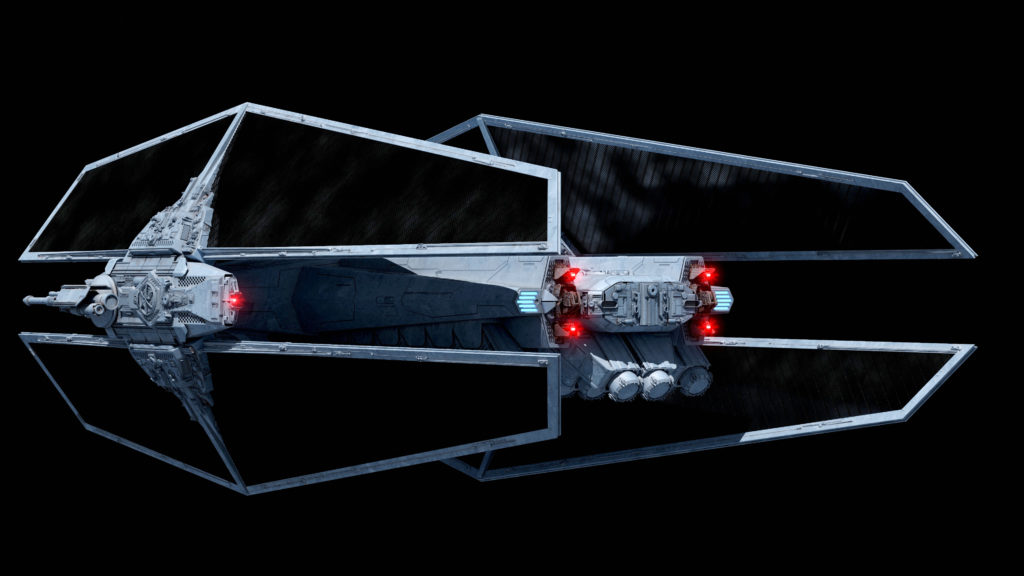 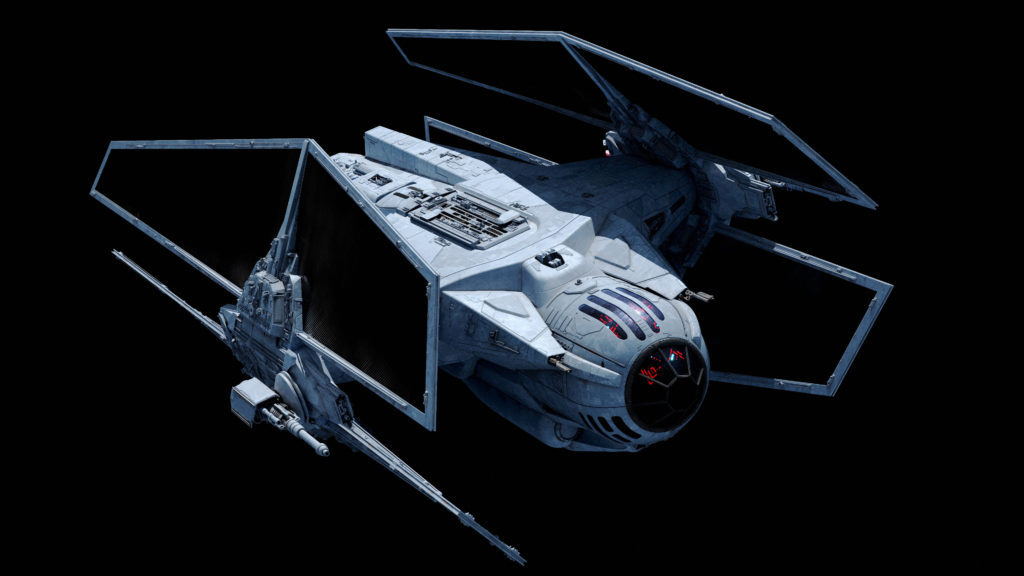 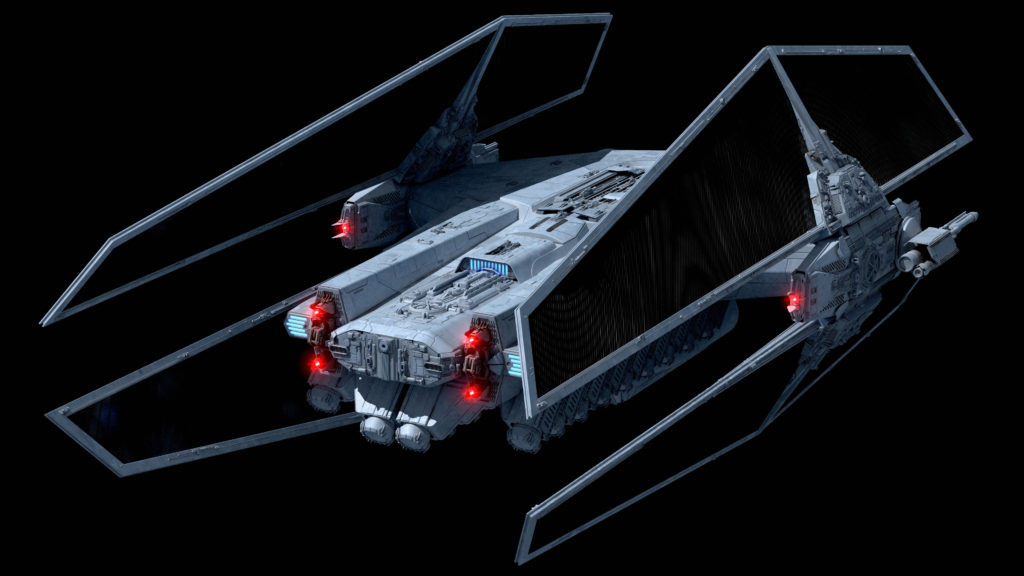 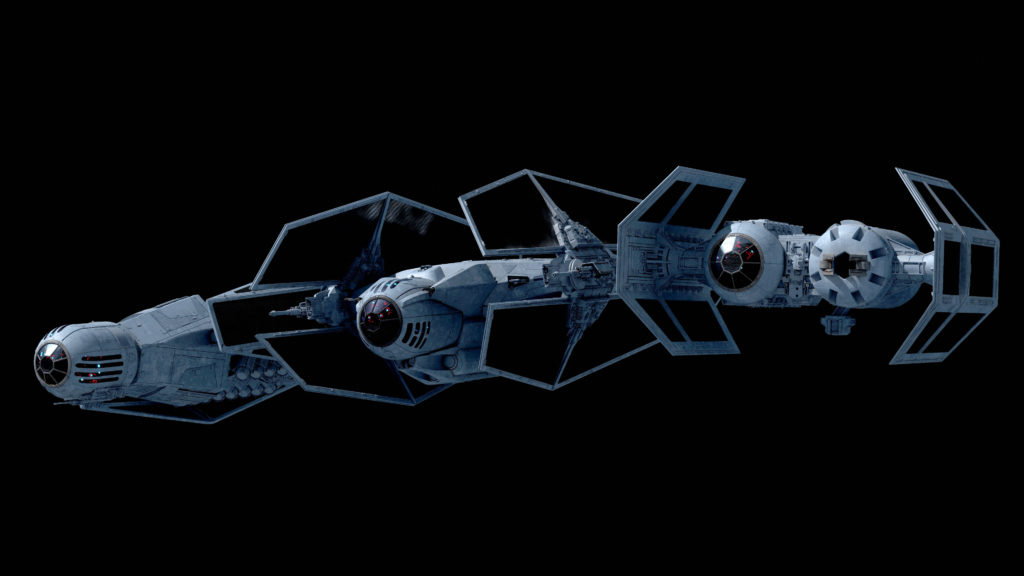 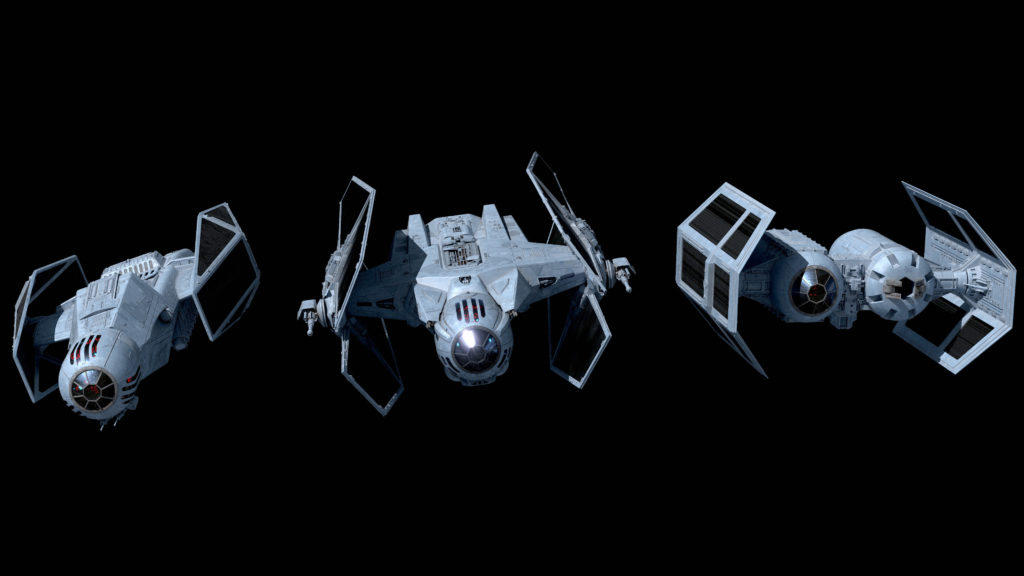 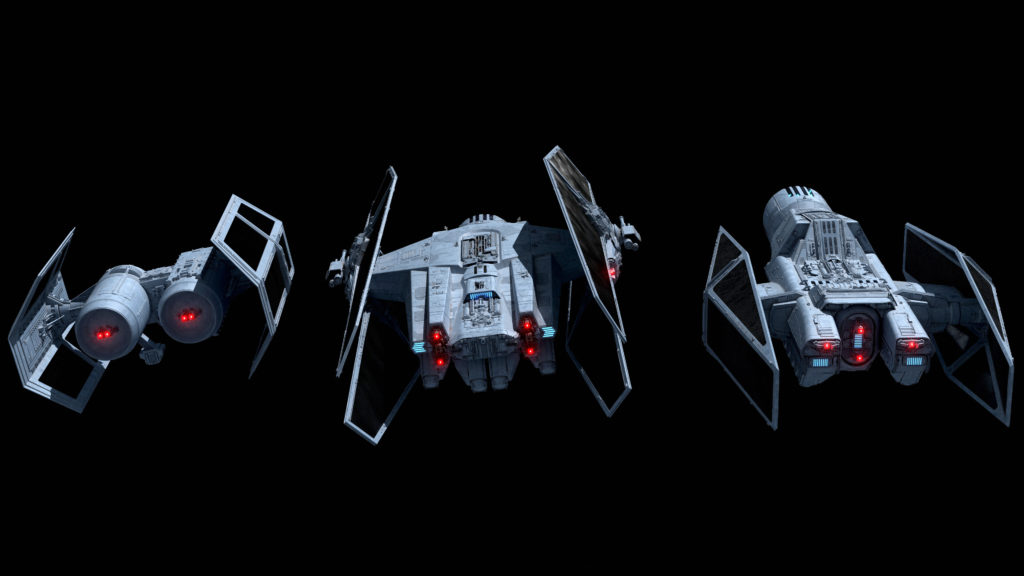 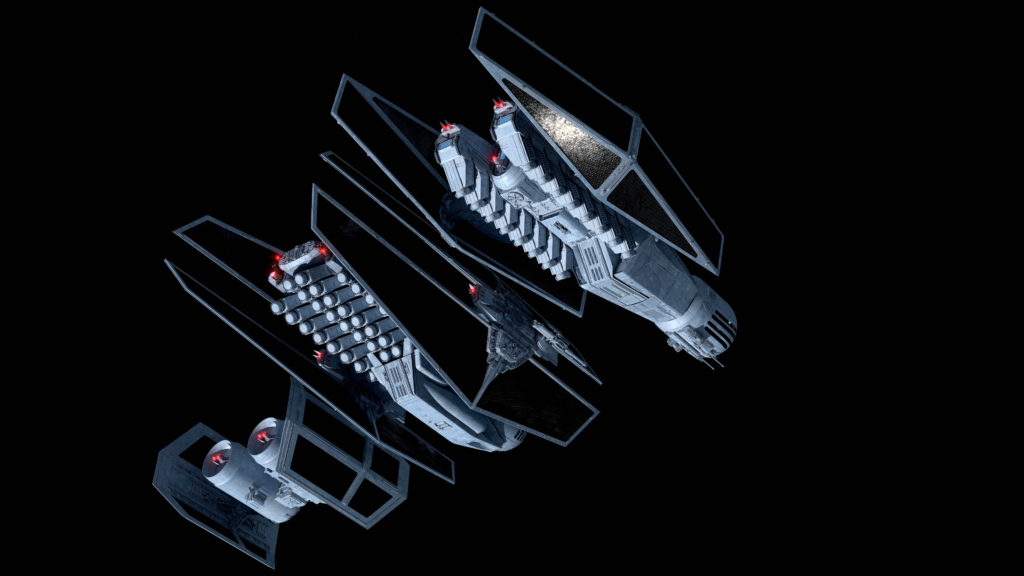 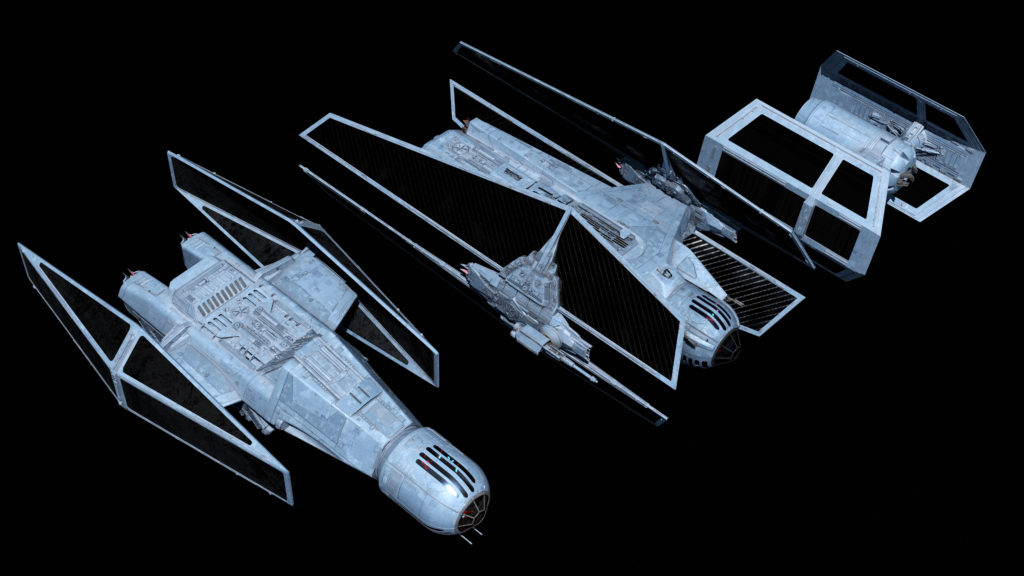 The replacement of the TIE Bomber.

Looks like a quick modification would allow function as a launch or shuttle. Gorgeous

Incredible design! Any chance you know someone who can 3D print this?

The Rebel Scum will never know what hit them!

Bruh, this is epic.

What is the length of this one? It looks slightly shorter than the Scimitar, maybe 12 meters?

@Fractalsponge, this is an incredible addition to the bomber lineup, but would you mind doing a three crew squadron command version?

Re: T.I.E. Demolisher
Holy C–p!!!-Watch out!!!
What a Beauty!!!! -It looks really amazing and tough ! (that means mega cool!).
I am a traditional artist having made many Star Wars related images througout the years, but I’ve NEVER, EVER seen ANYTHING like THIS !!!
Again, congratulations !
Have you gotten to make yet the Mandalorian’s ship RazorCrest yet?…Please contact me when you do and I’ll be here in a heartbeat!
I am just blown way at your work. I only wish my art was this wicked !

This kind of reminds me of the heavy bombers from The Last Jedi, except that this one is far superior. It has a smaller profile, turrets that seem like they could swivel back to fend off pursuers and it seems like it might be faster.

The TLJ bombers actually seemed to have decent turret coverage, but points in full on size & speed (plus, presumably, ease of ordnance launch).

so basically the Scimitar Bomber meets your worst nightmare?

I created a very similar version of this in Lego without realising this existed and then I thought of the name Tie Demolisher. Almost submitted it to Lego Ideas… I’m just so sad about it.

Taking a second look at this, it appears that the wing-mounted guns can swivel, which I believe would seriously aid in strafing runs where you didn’t want to expend extra ordnance. And are my eyes deceiving me or does the cockpit module look like it can eject from the main body?

That’s really cool, do you have this as stl file?

Besides this design making for an honorable addition to the ‘squared-off panel TIE’ stable (alongside the /sa, Scimitar and Vader’s X1), some of those low-angle shots are damned rakish. Plus, those bomber-comparison pics include a couple choice angles on the Scimitar (which still seems pretty slick to me, but I suppose anything would WRT the /sa).

You know I wonder which of these two bombers have more munitions This one or the TIE Interdictor/Punisher?

I’d need to know how much stuff fits in your average TIE/sa pod before answering, but at the moment I’m tempted to favor the Demolisher.

Well… Standard TIE/sa payload was 1 of the following: “16 concussion missiles, 12 proton torpedoes, 8 proton rockets, 6 space mines, 4 proton bombs [not to be confused with the proton bombs being dropped on the Falcon in ESB], 64 thermal detonators, or thousands of propaganda pamphlets…”

Multiply by 4 to approximate an Interdictor/Punisher payload of 64 missiles. Scimitars are noted as having 16 racks [see ass-end views curtesy of FS above] and a 32 missile payload. Demolishers are shown with 34 racks so an assumed 68 missile payload, thereby just squaking over the TIE Interdictor. However, that doesn’t include the 3 racks under the cockpit, so 74 missiles is closer, perhaps. Also, it should be noted that theoretically a Demolisher could fire 34 missiles at once, not the 4 that the Interdictor is limited to.

Obviously, that depends on the source you want to look at…

Much depends on how big the missiles are. Cross sections concussion missiles look pretty small, like sidewinder small. If that’s going then you could *maybe* triple-pack into one of the Scimitar/Demolisher cells. Though in practice I imagine that the cells are modular, and you’d just replace them with a bigger quad-packed launcher for concussion. This kind of concussion would be strictly anti fighter, being way too small to be useful against anything bigger short of shuttles/light transport maybe. I assume the “standard” calibre cell (which I use for all the fighters) can take the short ANH proton torpedo (on all chassis), or be swappable for a multi-pack light concussion launcher. The longer cells in StarWing and the bombers would be filled with a single long heavy torpedo/”rocket” or maybe multiple short ANH-style torpedoes, or racked bombs. The underslung magazine in the Demolisher would either be rotary concussion for self-defense or really long very high yield anti-ship. This is incidentally what keeps a place for the Missile Boat in a Demolisher-world – the cell count is very similar but Demolishers can only use really long, really heavy, warheads in the underslung magazine, or in limited numbers replacing the cells, but every single Missile Boat cell can take a heavy weapon.

In the modular designs you could just yank all the cells and undersling giant torpedoes real-world 20th century style in each rack. One main advantage over the /sa pod – you get very easy payload flexibility and you can launch almost everything at once instead of one at a time.

“Mines” – hehe. Well, I’m just going to drop here that I think anti-ship SW mines are probably capacitors strapped to cheapo ion cannon barrels, and in no way suitable for deployment from an /sa pod. I suppose some mines could be just a proton torpedo with a sensor system as well, and that might fit in fighter chassis.

So I guess the TIE Interdictor/Punisher kinda outclassed by the TIE Demolisher in terms of versatility and bombing power right Fractal?

In light of the above breakdowns, Interdictor might be handier for puttering around a system dispensing anti-shuttle-yield mines, but Demolisher is probably the one you wanna toss into a pitched fleet engagement.

I could see a situation where the Interdictor/Punisher was put together in a hurry by an overstressed sector fleet with too many extra TIE/sa pods and not enough pilots in a front-line maintenance bay. The Demolisher would be Sienar’s central R&D department’s attempt to “Do it Right”. Sort of like A30 Challenger versus A41 Centurion in the 2nd World War.

To be it seems like the empires answer to the B-wing.

The B-wing is very weak when compared to the TIE Demolisher as you are comparing a light bomber to a heavy bomber. I’m thinking it would be comparable to the New Republic’s K-wing.

Is it classified as a heavy bomber?

What is the armament?

Replace bomber bay with cargo pod and we could get a pretty nice assault shuttle.

Fractal have made a Assault Transport with some parts of the Assault shuttle here: http://fractalsponge.net/?p=3551

Yes he did. But if we replace bomber bay with cargo pod it would also create interesting ship. Maybe even we can give him ECM package, SIGLINT/ELINT or long range scout.

Get out of my head 😛

And, if he really wants to push it, design a model that launches soldiers in jetpack equipped power armor a-la Section 8.

Are those bombs on the racks or are they missiles which can fire forward? I can kind of imagine them arcing around after launching to hit targets in front, like an inverse Javelin…

They’re launchers – either bombs or launch missiles that maneuver (see the ANH torpedoes that make a 90deg snap turn in less than a length).

I wonder if this would have a shield generator. If so it would be awesome for ground attack.

It’s certainly big & well-equipped enough to merit shields; by & large I get the impression lighter TIEs only lack (ray?) shielding due to doctrine WRT speed & numbers as better defenses.

Do the wing guns swivel?

Looks like they’re on a rotating mount, though hopefully there’s at least one extra crewbeing (or some kinda astromech/gunner droid) for aft-defense situations. Plus, there’s always lobbing a missile or four at tail-chasers.

Oh snap, I didn’t realize the name was finalized. Guess I need to pick up pace for the next naming race. Sweet build! Btw, Igot to ask, what are thise glowing grill bits in the aft? It can’t be radiators nor sublights…

Nice to see this done now we will wait for your Advanced TIE Interceptor or that TIE variant that I like to see being done in the future Fractal.
Also seeing how big the Demolishers are I’m willing to bet that 3 squadrons of those would make up a whole wing.

Damn good design! Overall aesthetics are very pleasing. Not one thing I don’t like about it!

What role would this vessel fill that is not filled by the Scimitar? Or is it simply a “better” version of the Scimitar?

Seems to make the Scimitar irrelevant

Eh, Fractal was apparently going for a ‘high/low’ mix between this bird & the Scimitar roughly comparable to the F-15/F-16 or Su-27/MiG-29 dynamic. Bigger, higher-hangar-capacity ships would field the Demolisher, while smaller capital craft would employ Scimitar squadrons. Plus, 1-for-1 replacement might take a while even if the plan was to swap out older machinery with the newer models.

The Demolisher is only marginally larger than the Scimitar. I’d understand if this was meant to be a straight replacement for the Scimitar, but Fractal rarely models craft meant for the same role

Roles are kinda nebulous in practice anyway, though Demolisher’s punchier lasers might make it more efficient at ‘detaining’ Falcon-scale frieighters & pounding on corvette-scale targets before its missiles hit.

The idea is that Demolisher is more of a bomb truck. It has a similar hangar footprint to a Scimitar, but carries over twice the munitions at about the same performance, by virtue of having a lot more power. So more efficient, but definitely more expensive.

The munitions would be expensive, but why would the vessel itself be any more expensive? Unless maybe it has better shields or something of that sort

As I understand this, it’s got a beefier powerplant to maintain Scimitar-equal thrust while improving payload capacity & firepower/shield strength. That probably accounts for the extra creds.