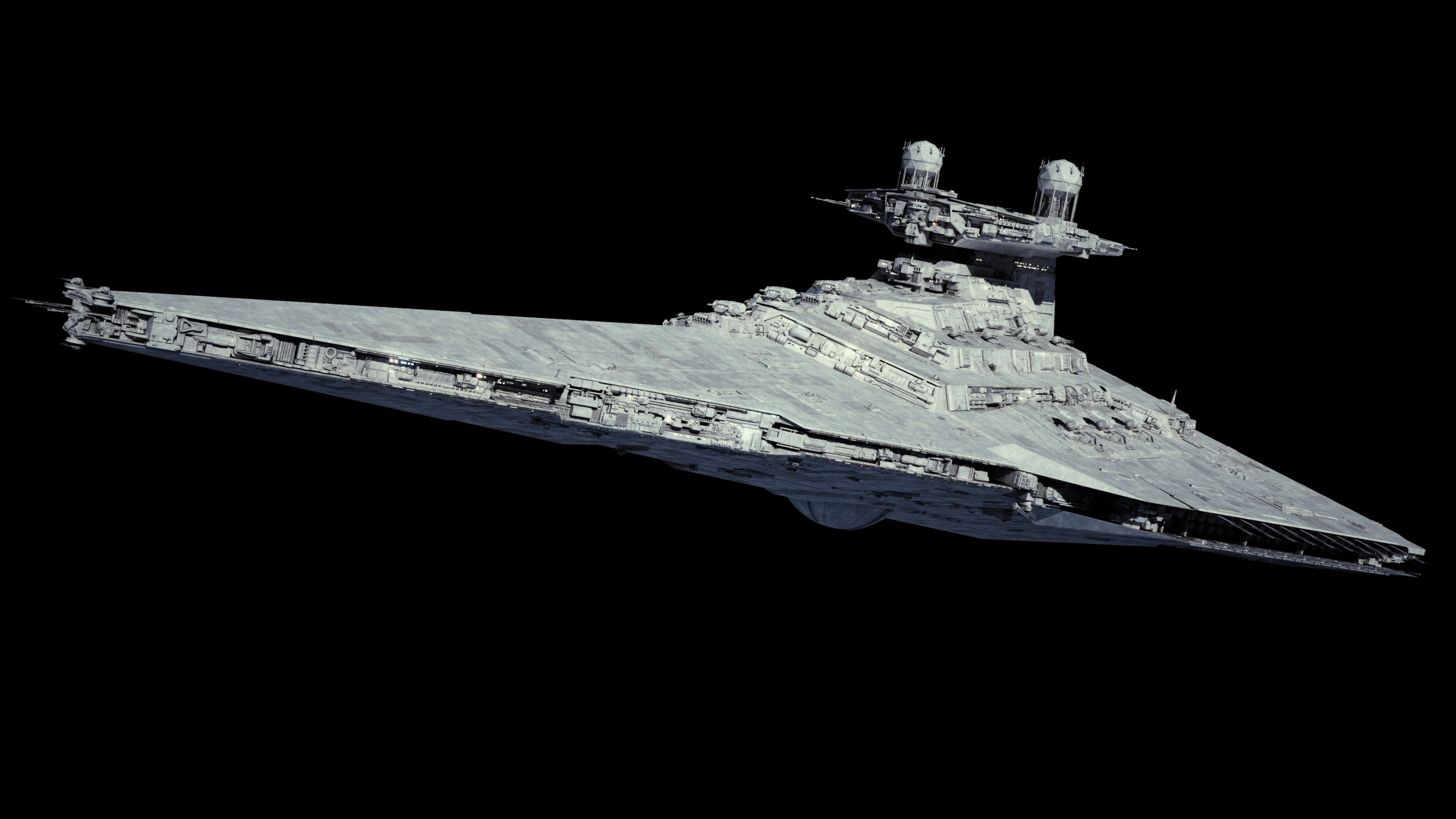 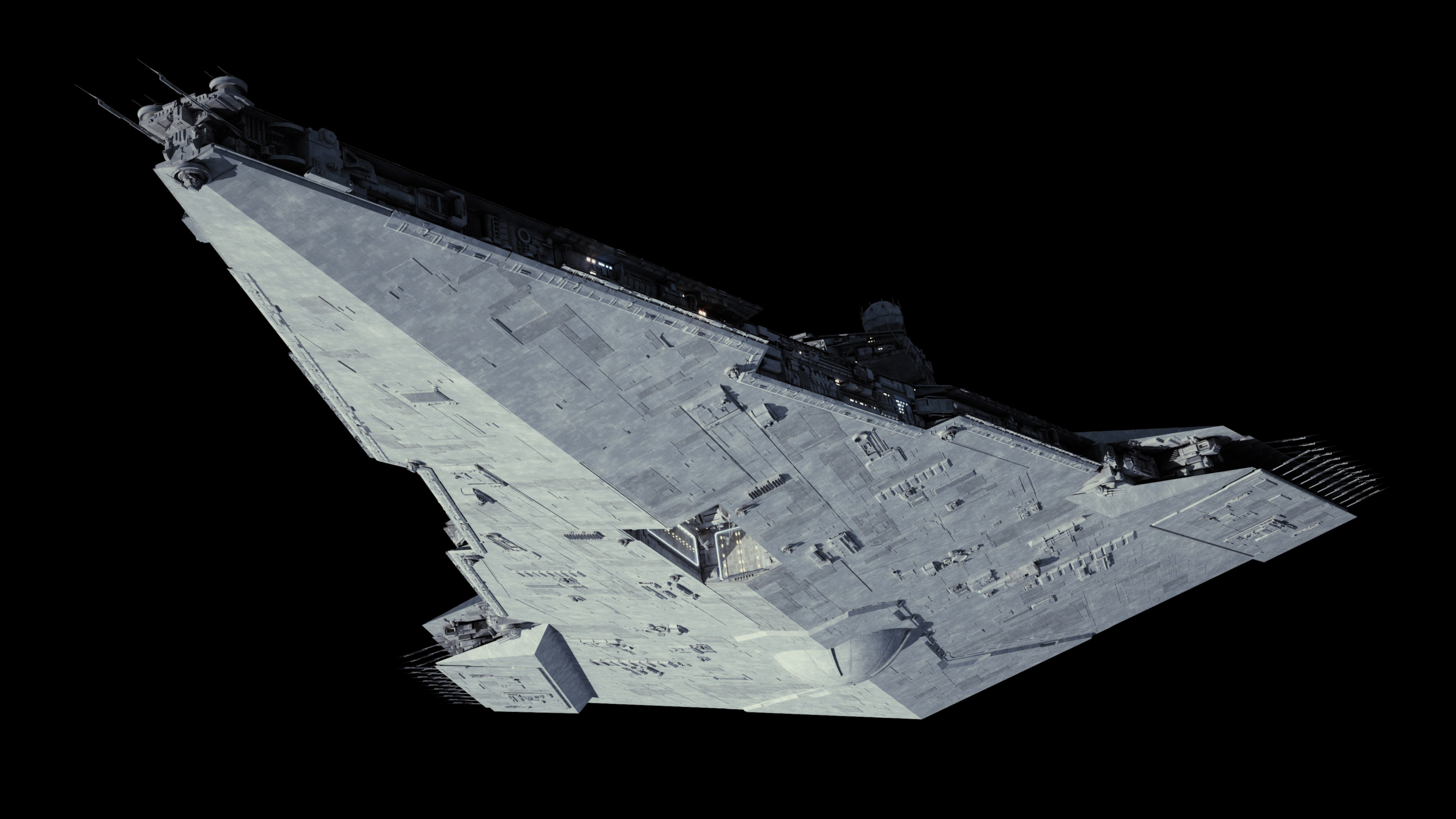 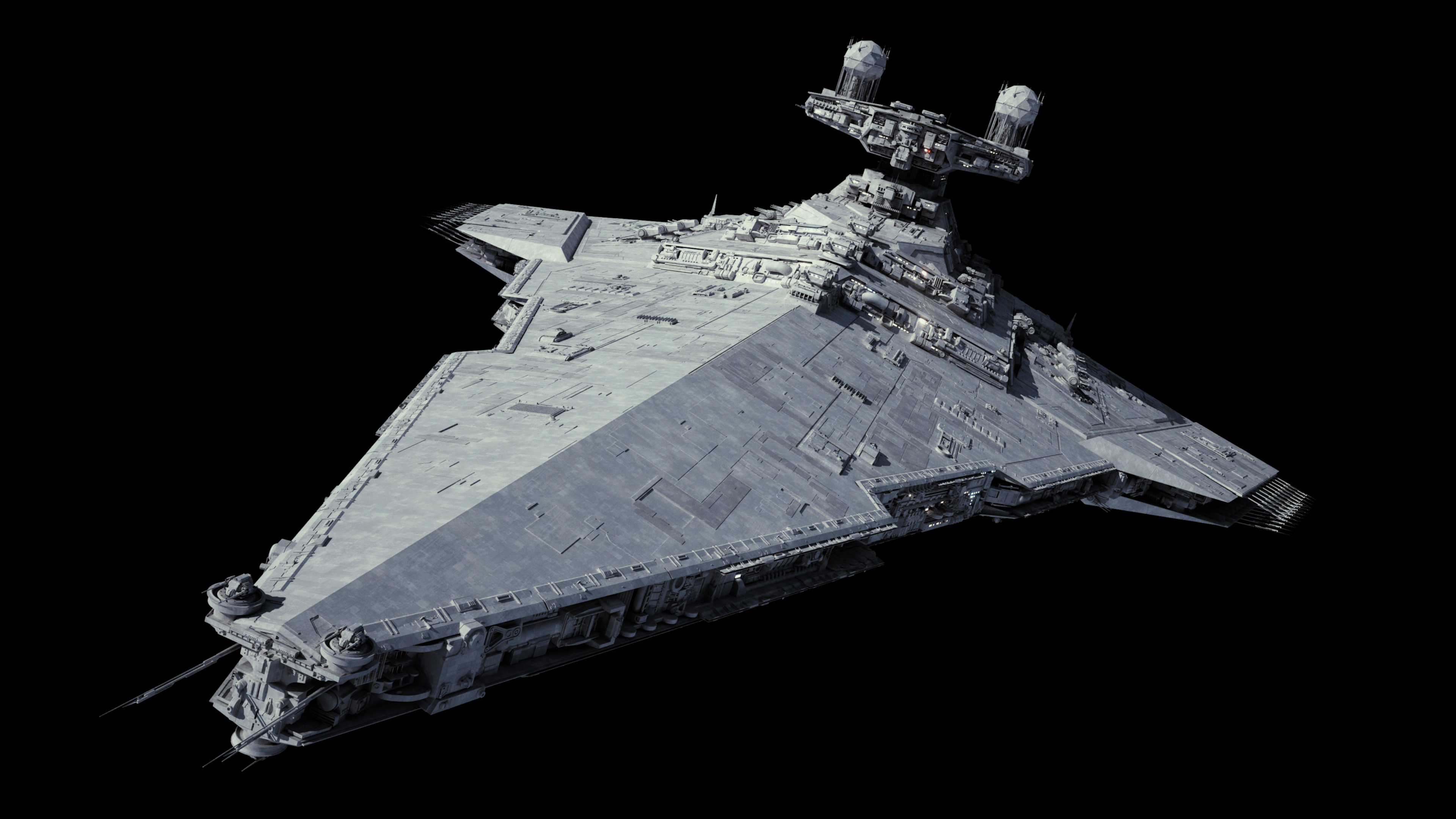 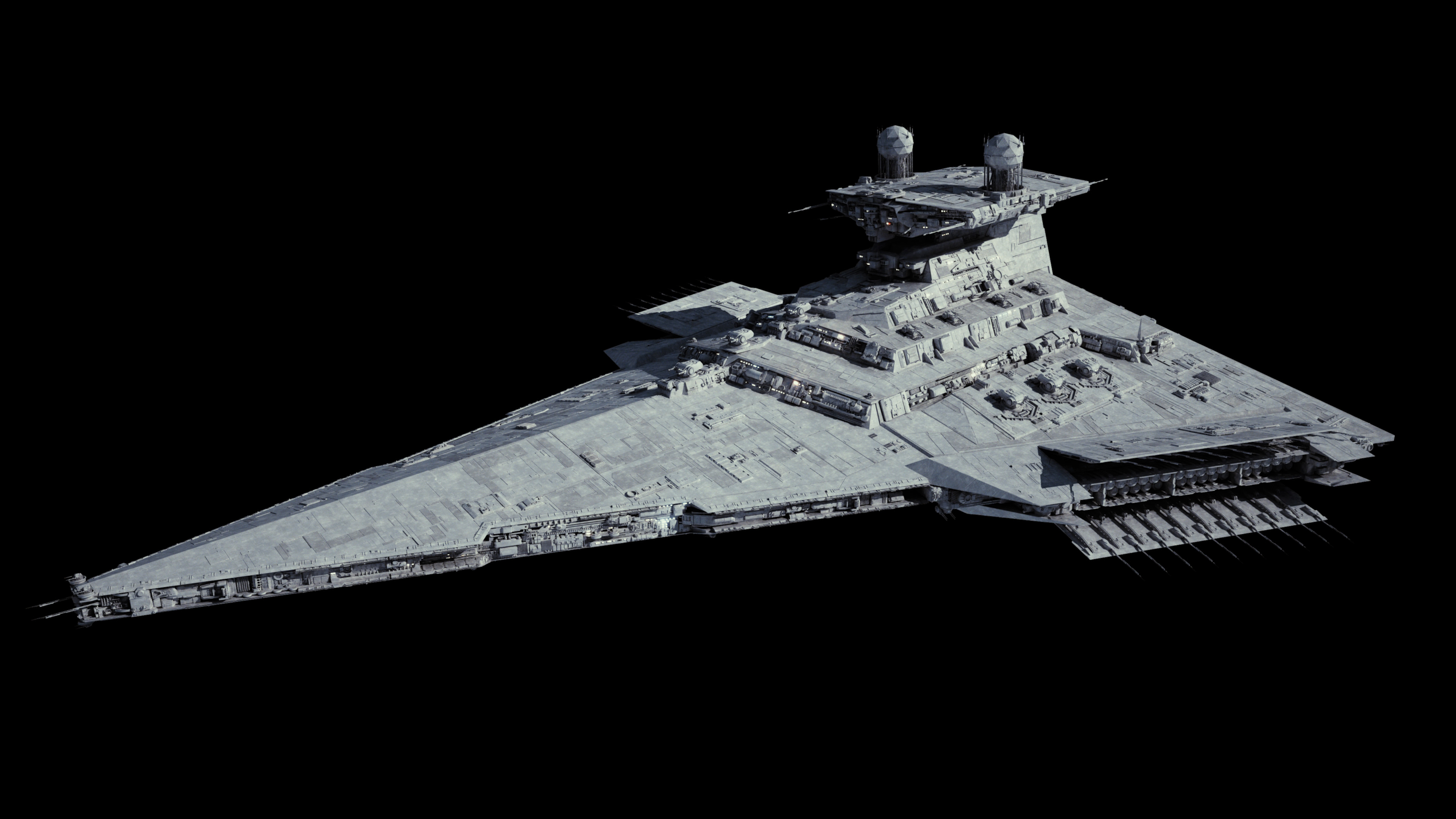 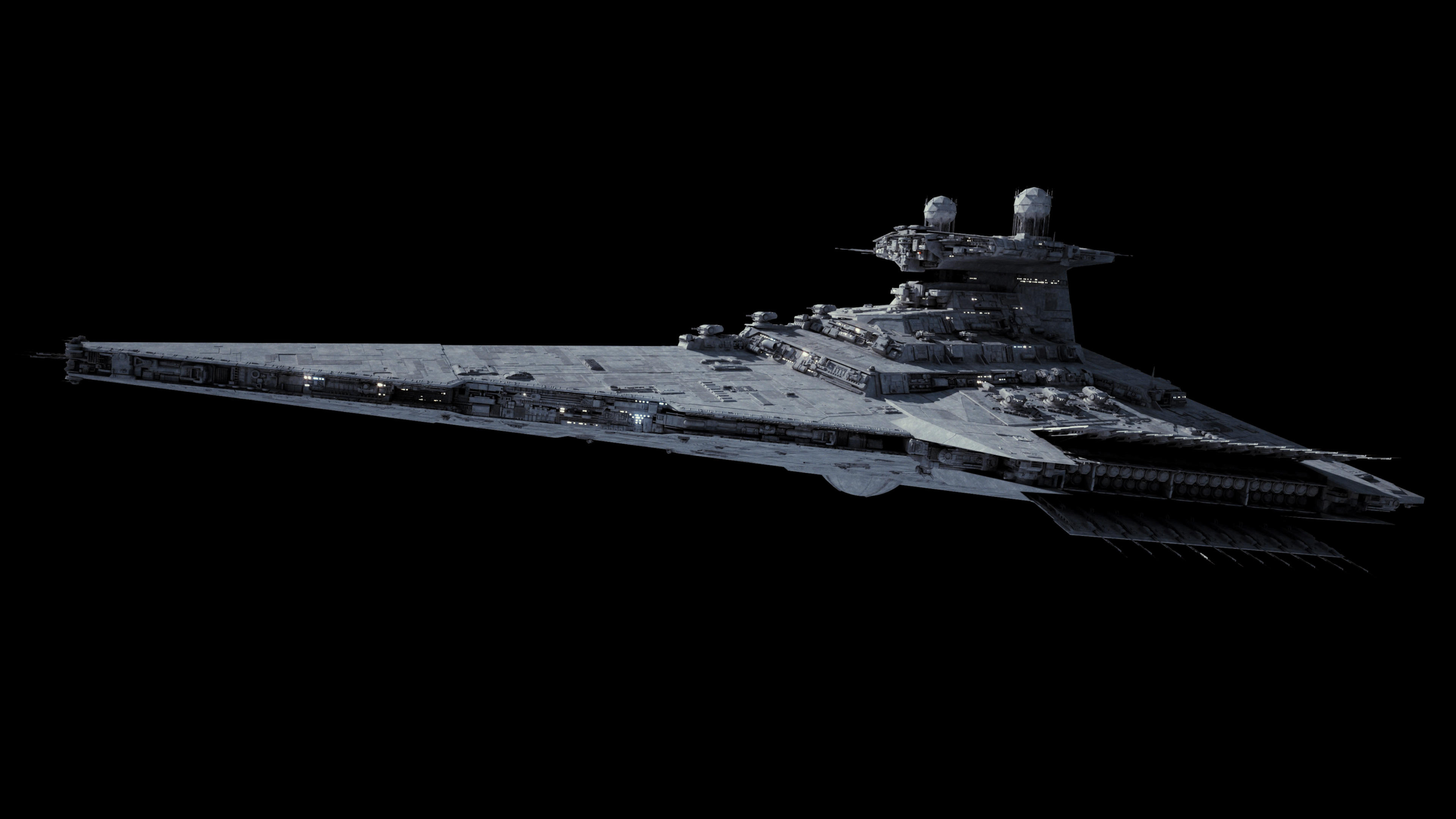 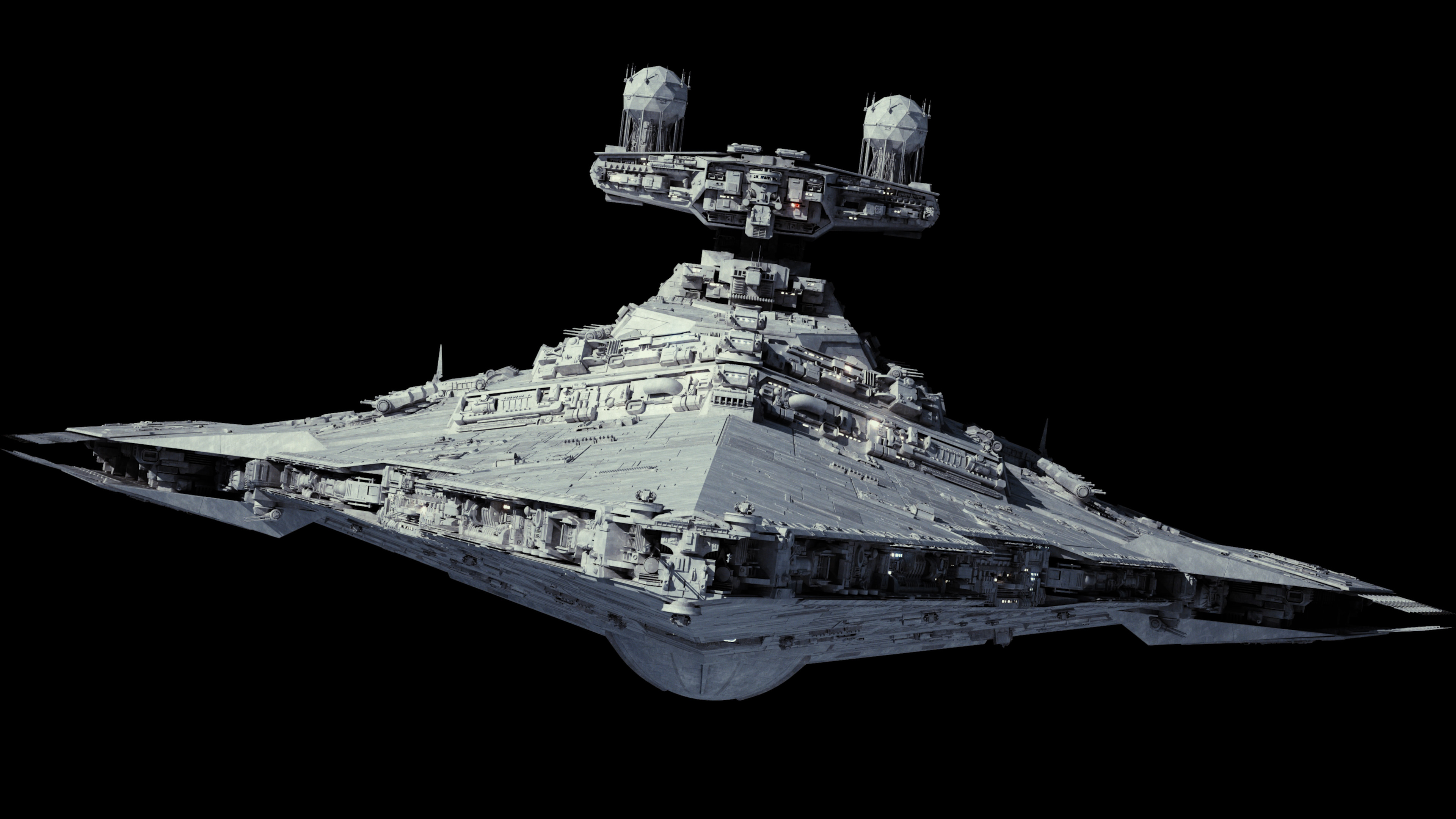 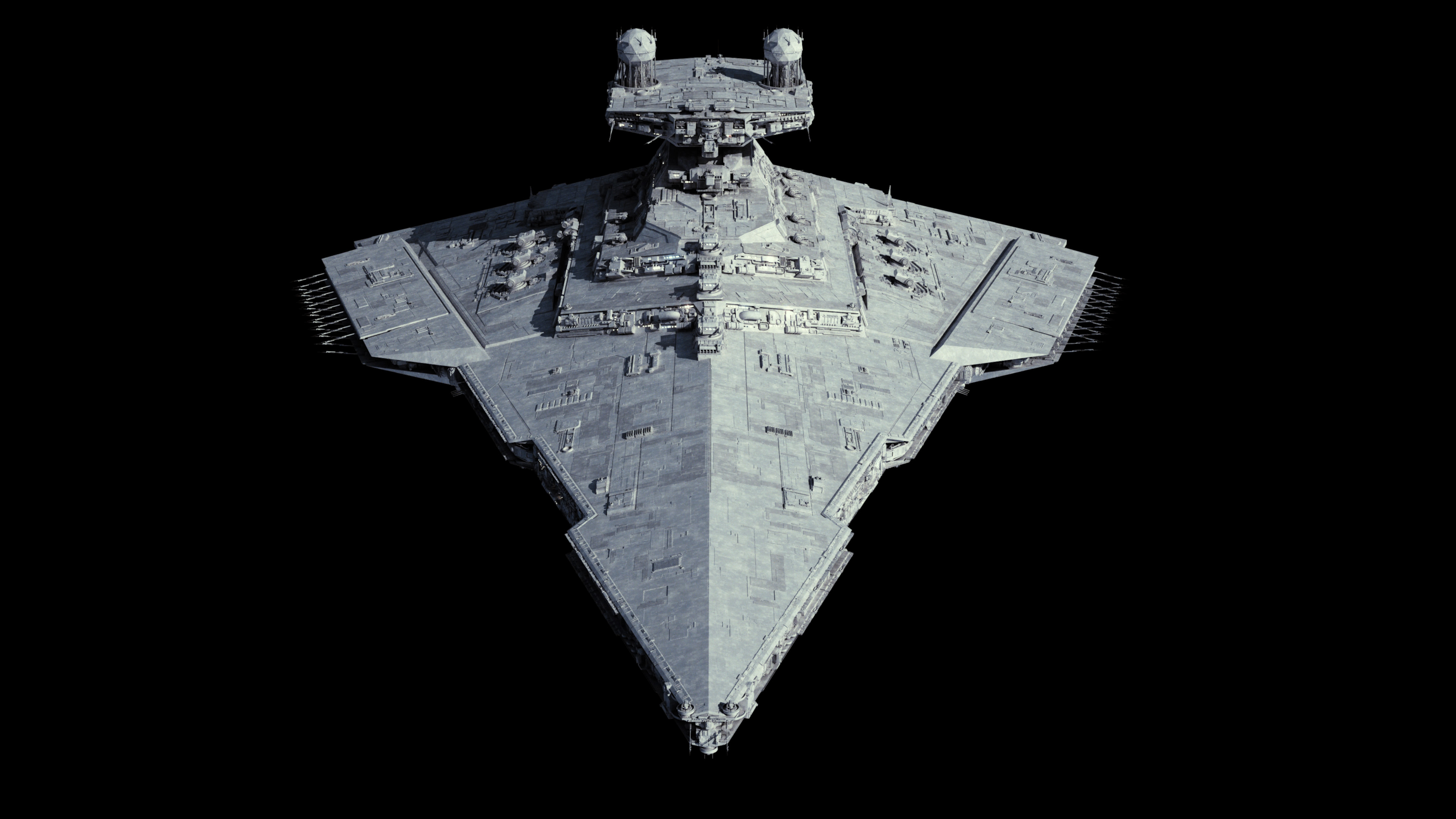 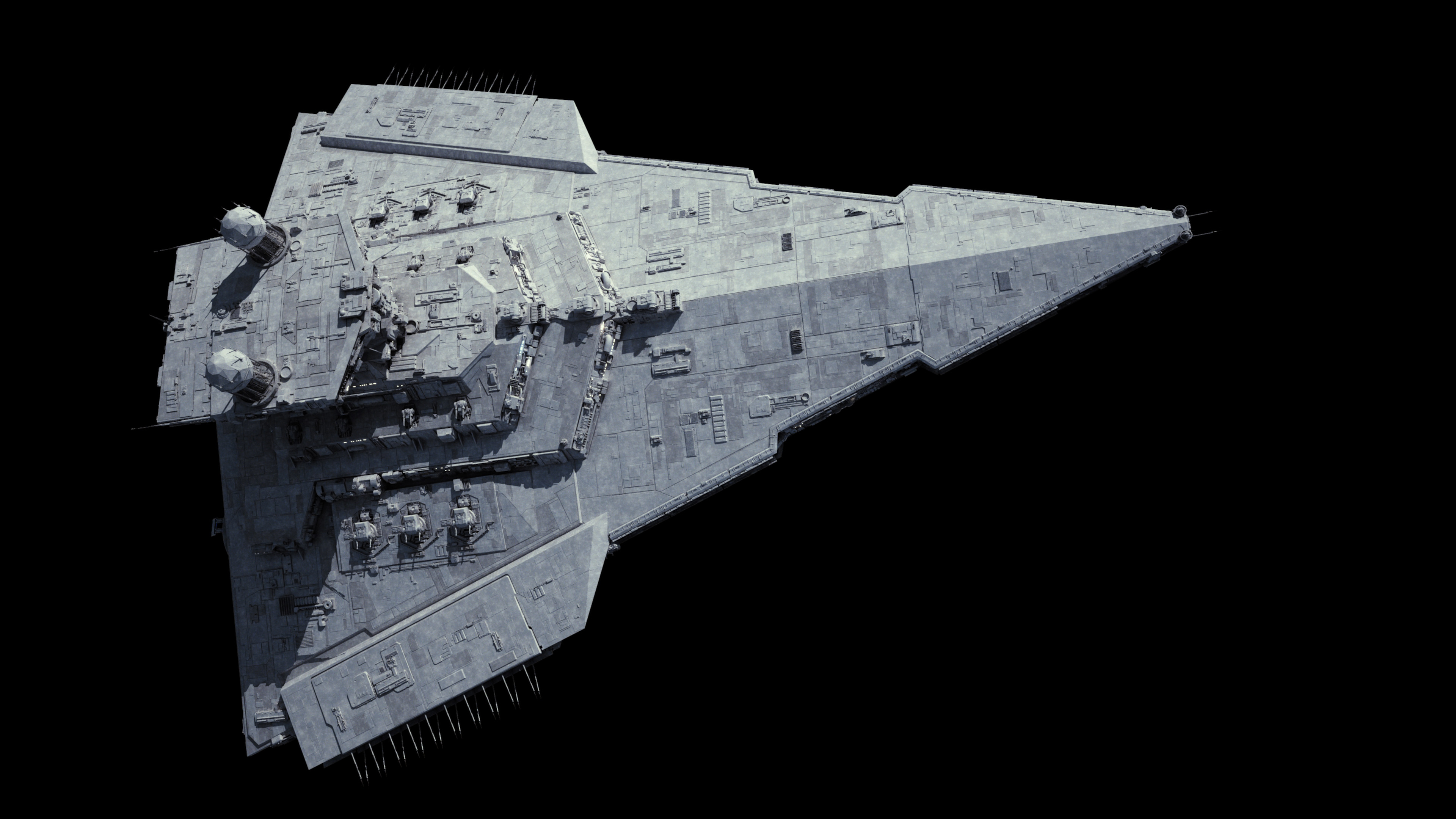 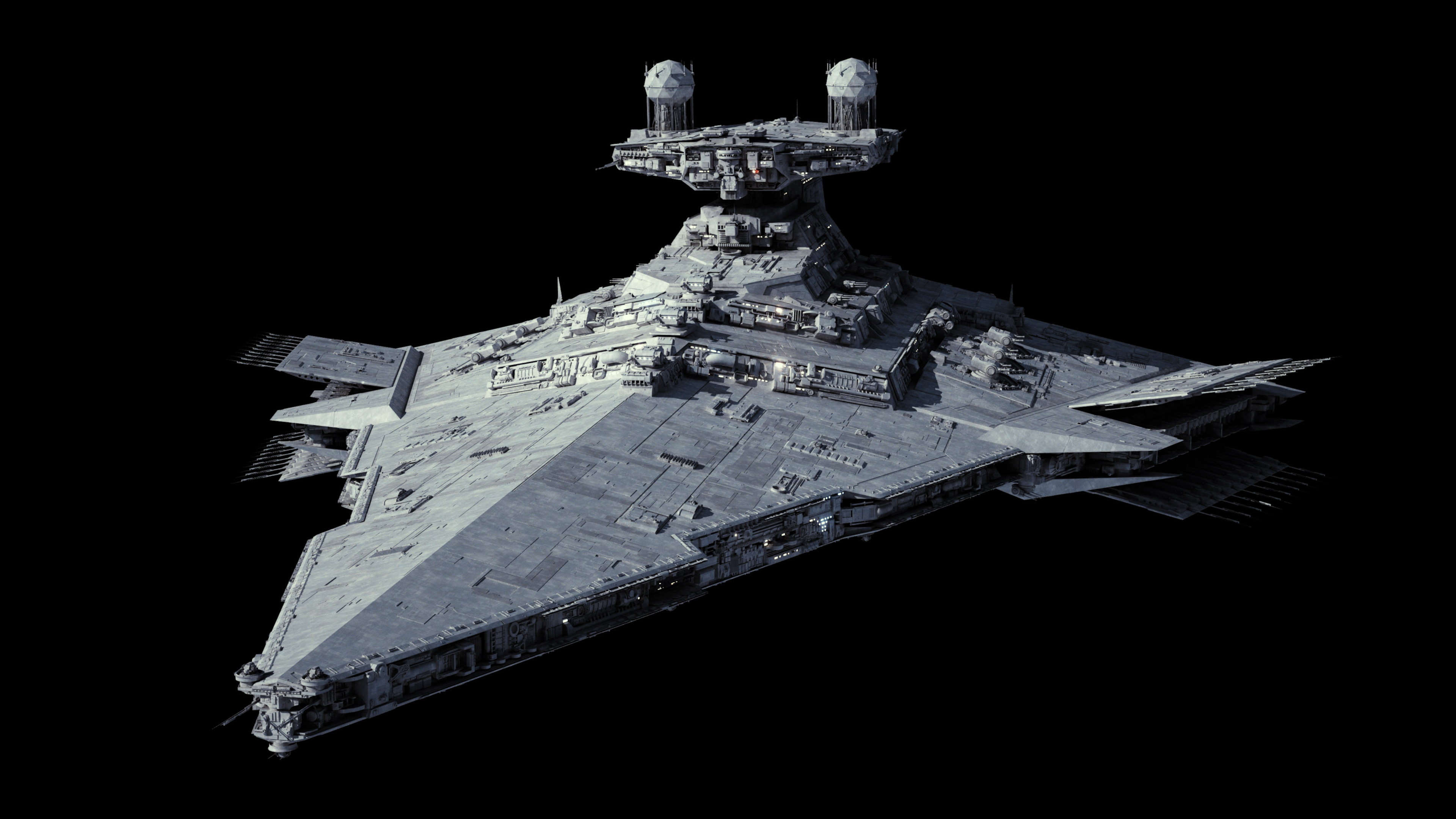 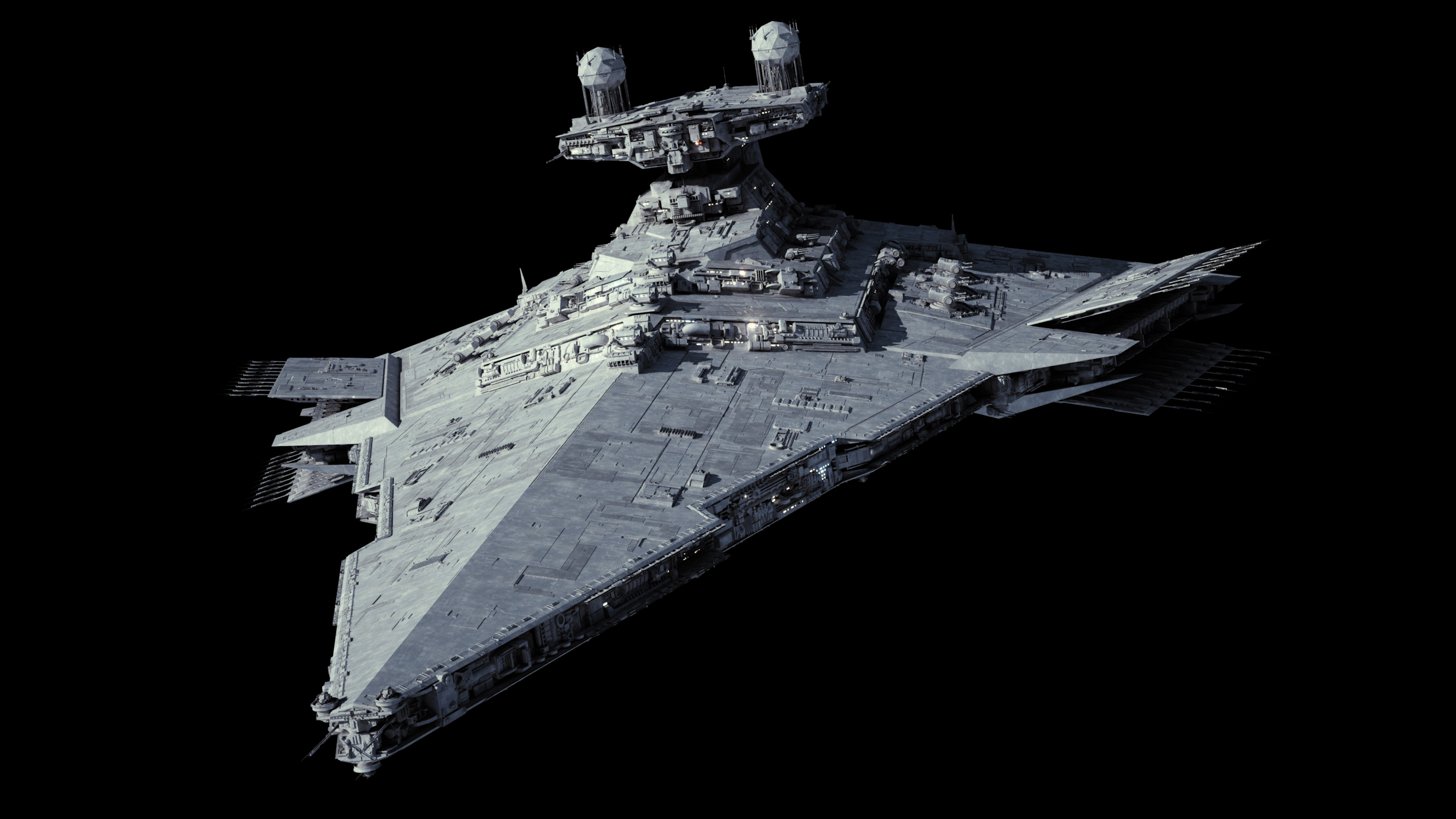 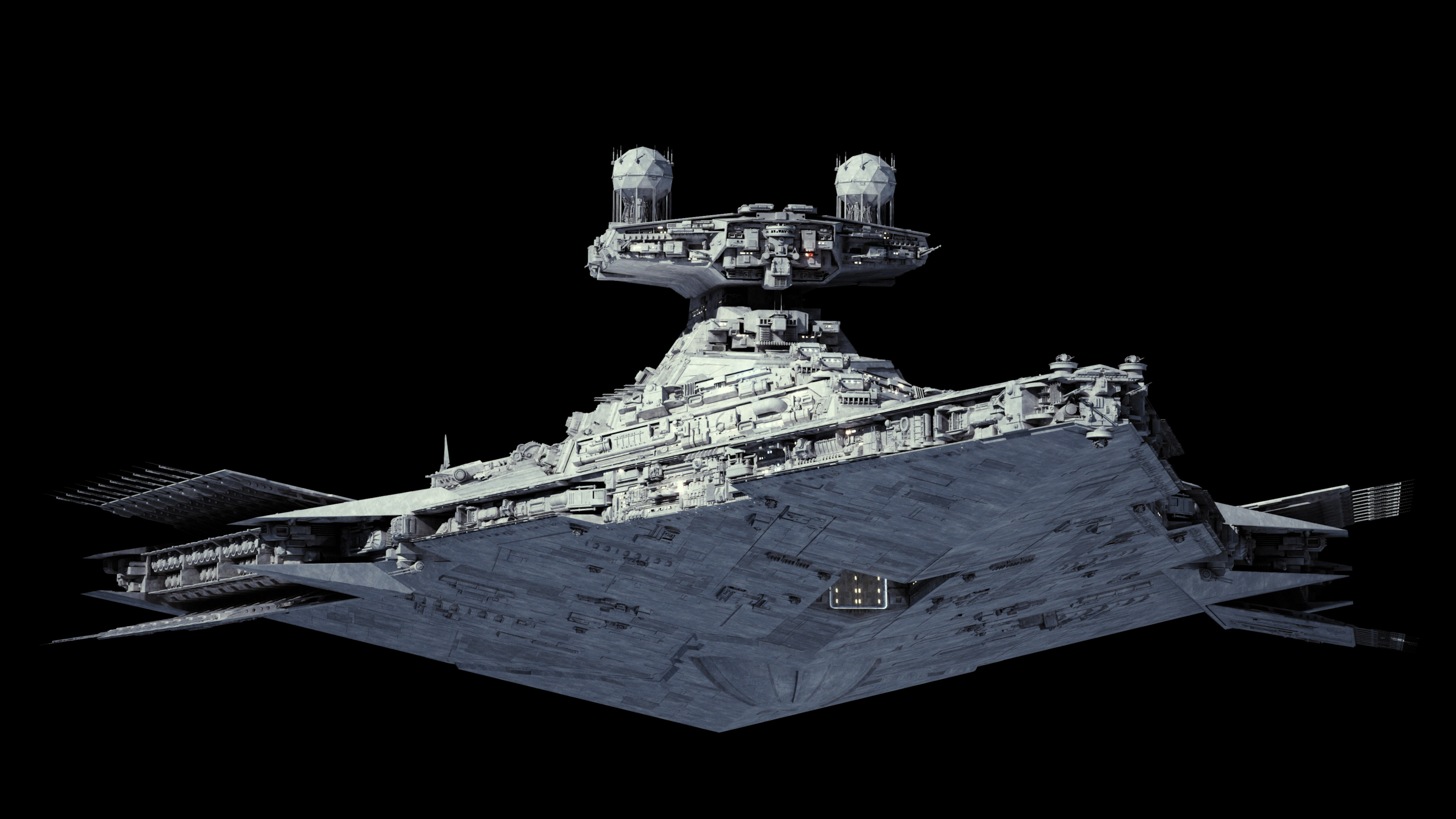 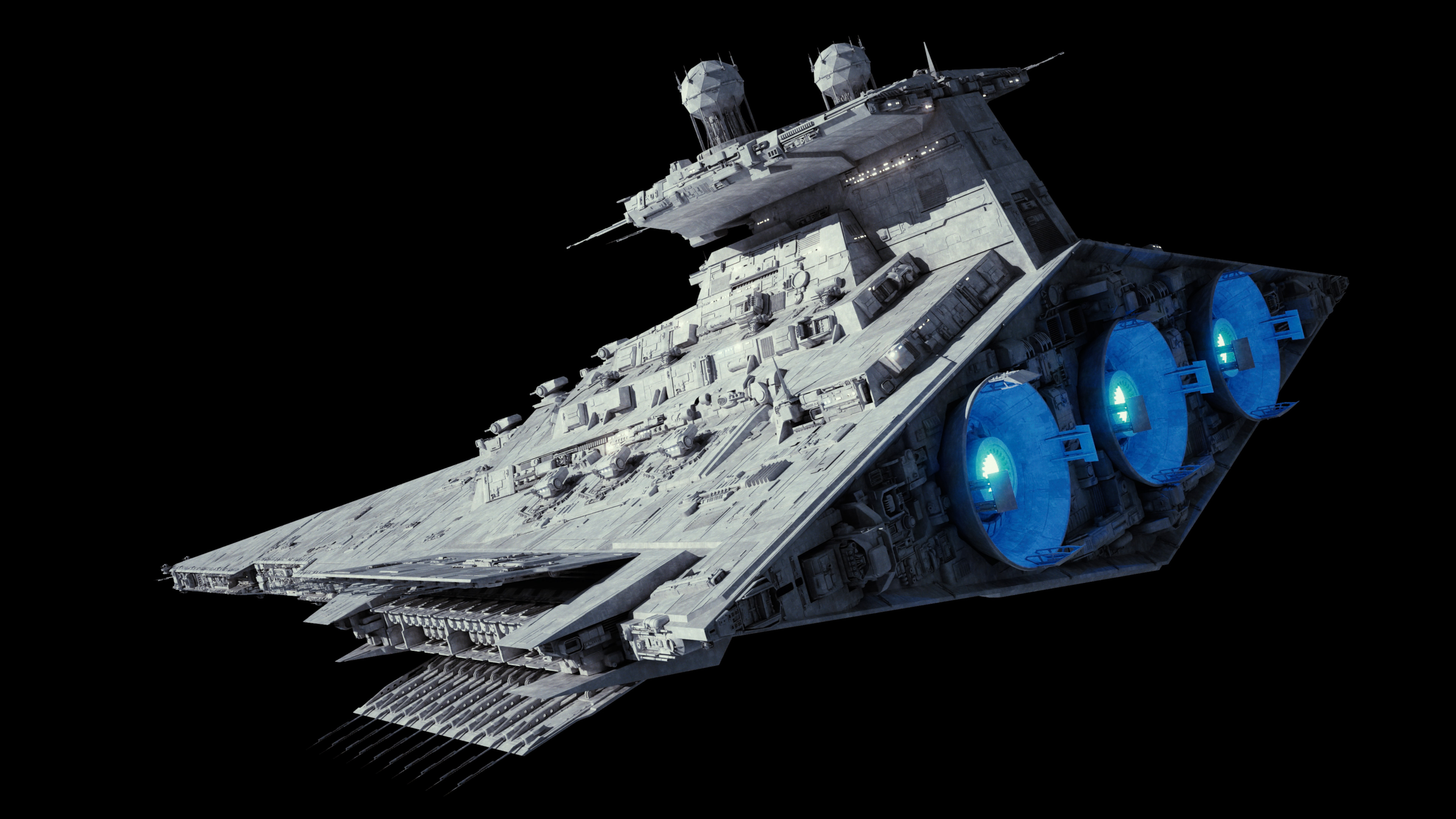 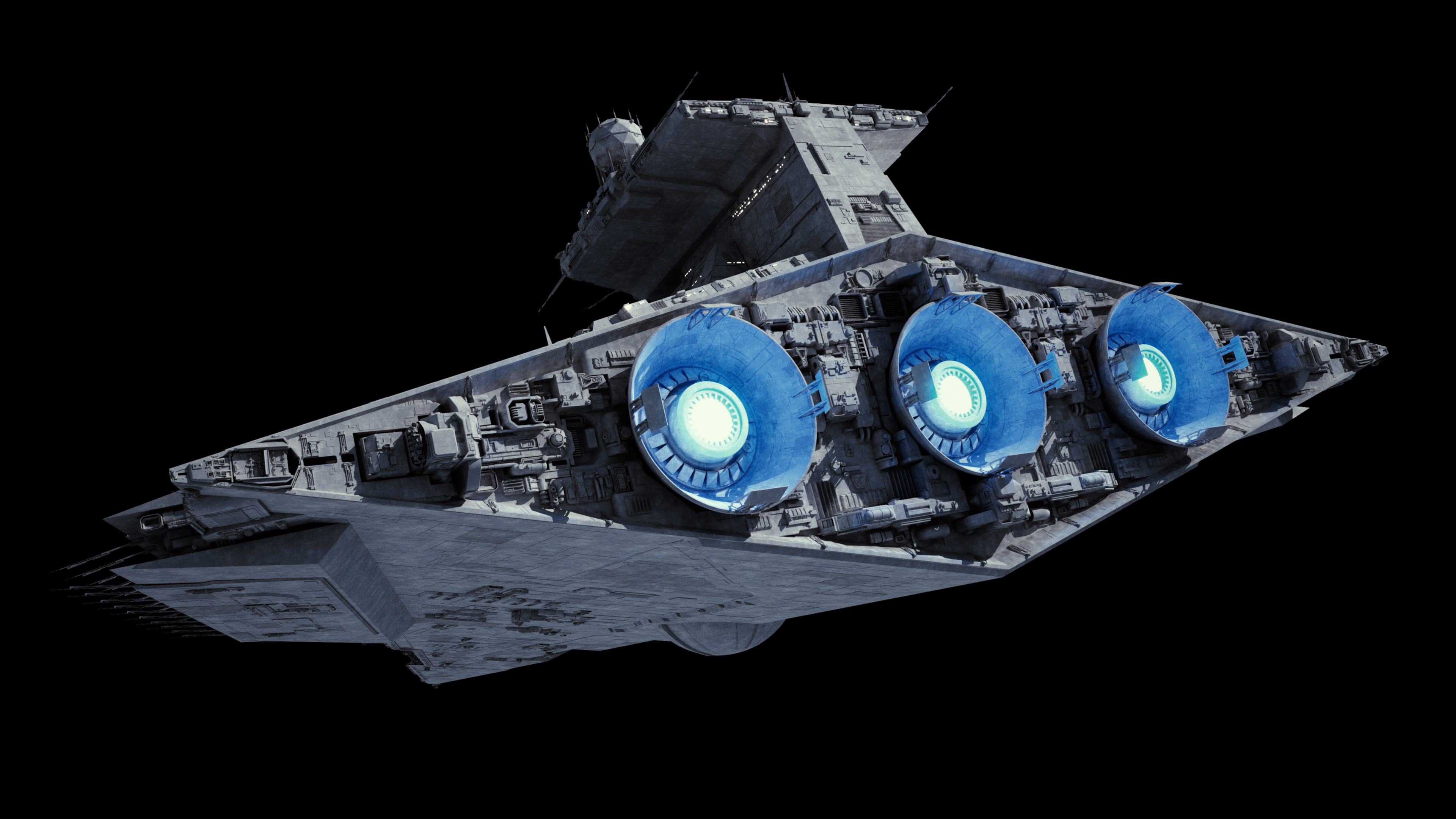 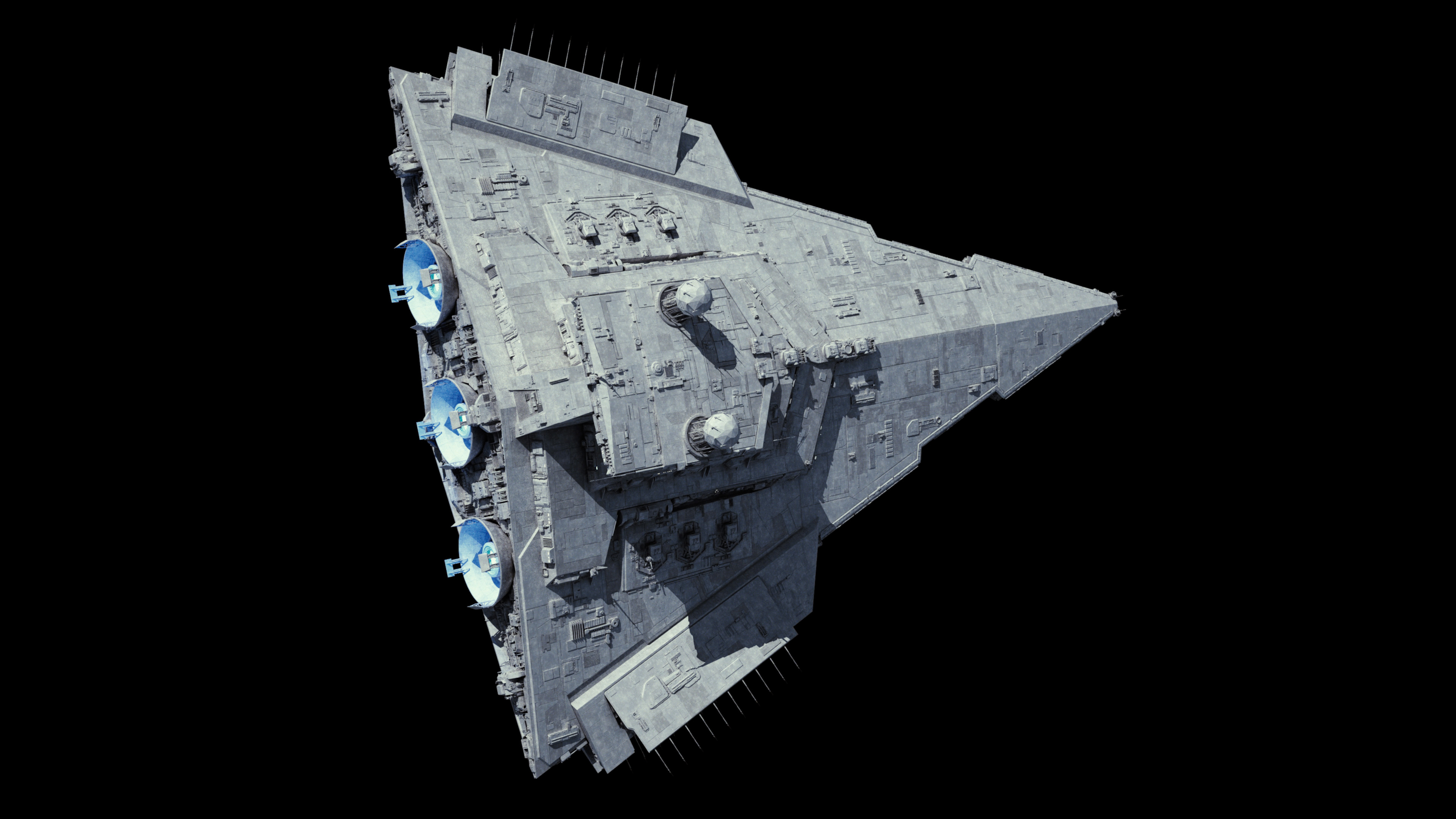 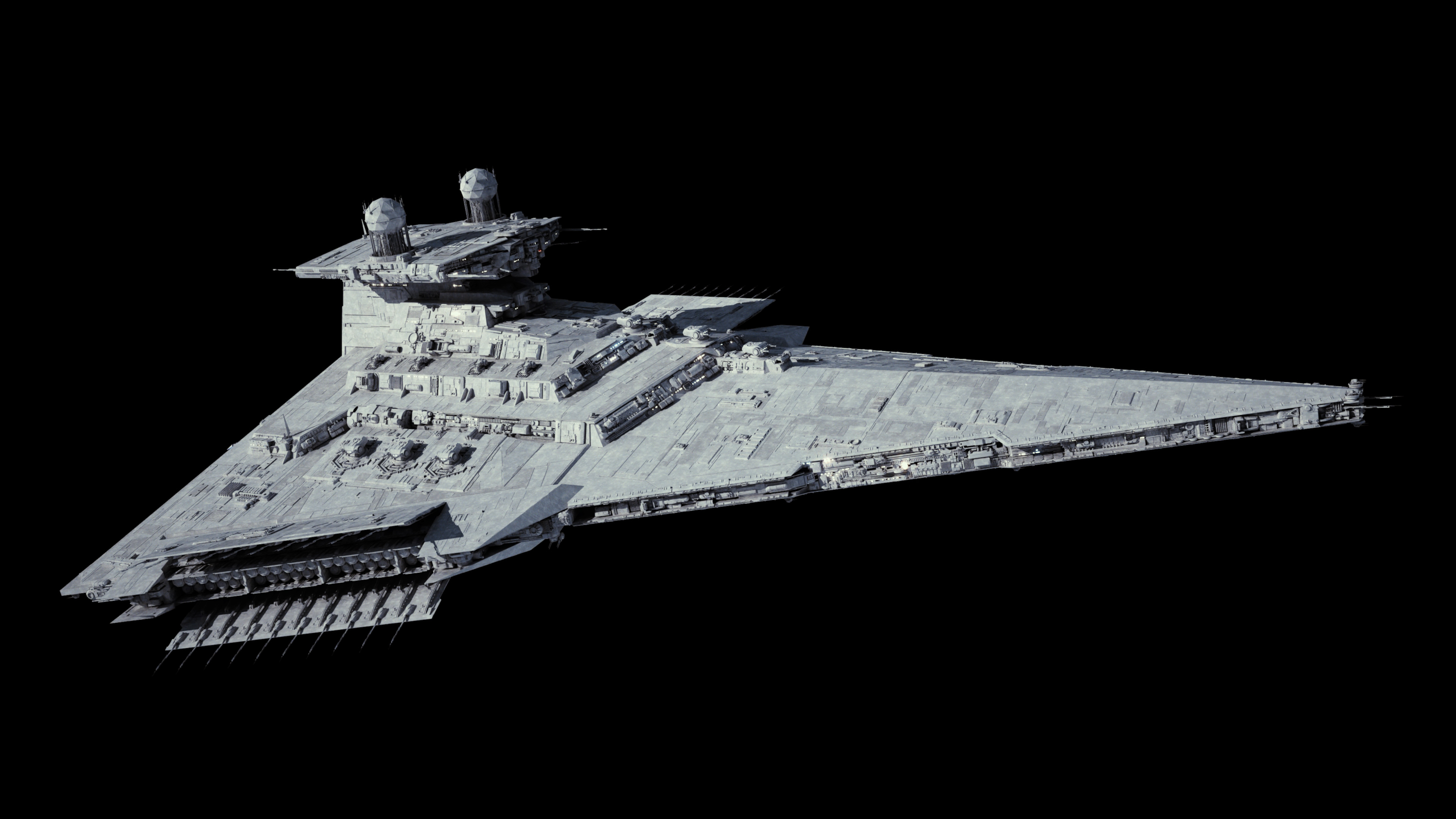 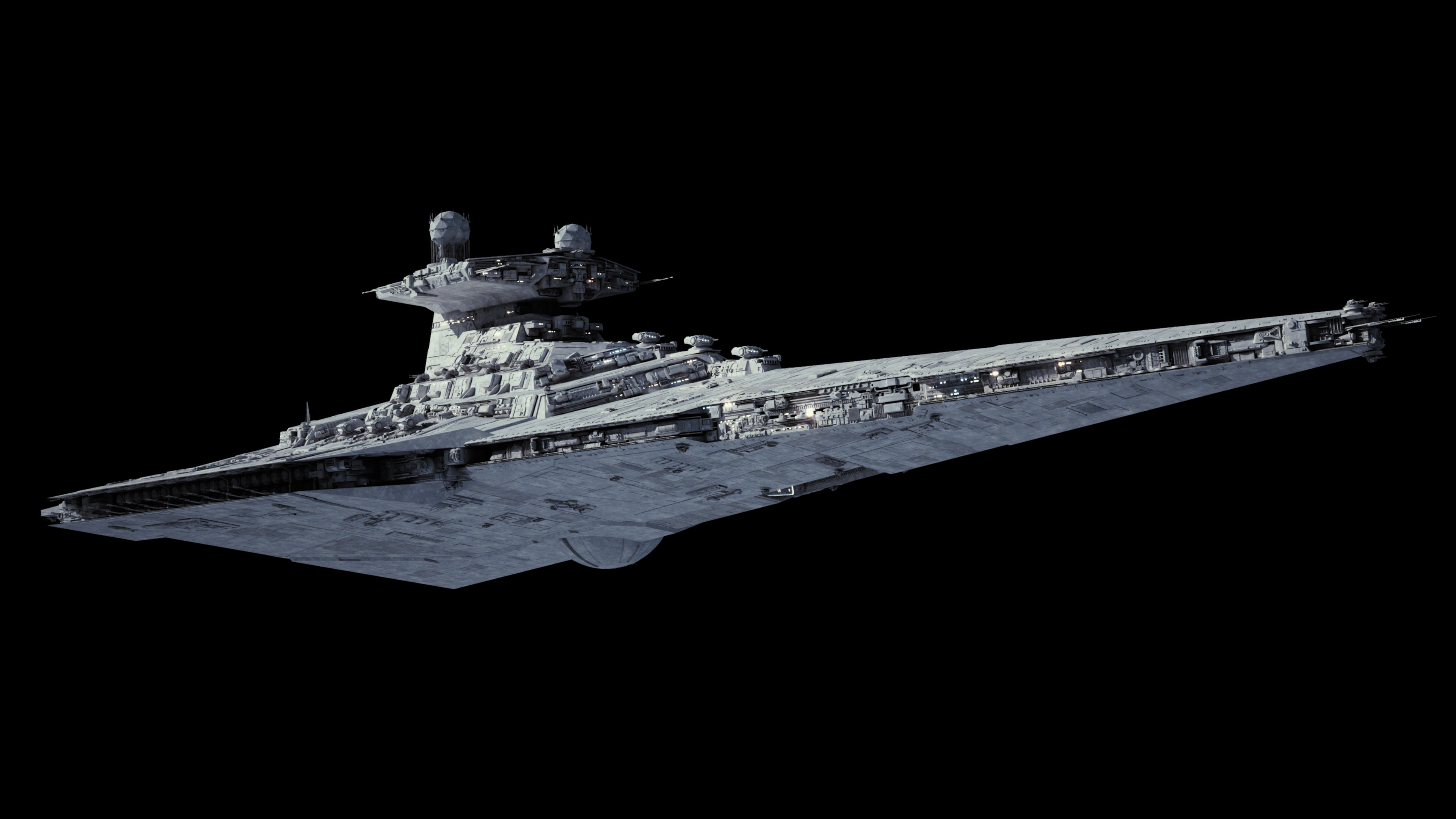 This is my favorite star destroyer

On my birthday no less

Happy birthday (only half a year late)

As a kid playing games like TIE Fighter, and reading comics, playing the CCG, etc. I wondered why sometimes the VSD didn’t have a consistent design with it’s rear “wings.” I don’t know if it’s always been part of the idea of the VSD, but I love how you’ve done a sort of “S Foil” thing for the VSD where the armament is concealed, and thereby also answering that question I had for so long.

While the stark white of Imperial-era warships is lovely, have you ever considered reskinning the Victory in Clone Wars livery? I’d love to see how they looked in that era.
Also, while I understand the Prequels aren’t quite your thing, I still hold out hope you’ll do a Venator one day.

I’ve had this question for a minute and I was wondering if you could give your thoughts.

In Star Wars Rebels Admiral Thrawn conducts an orbital bombardment of the Rebel base, in which we see multiple ISD’s utilizing their main batteries. Now, in your work and calculations (among many others), just a single blast of these turbolaser batteries is rated at way higher than megaton destructive yield (I don’t even know all the terms, but I catch the drift that a each shot from an ISD is stronger than Tsar Bomba).

And yet, in Star Wars Rebels, we see Kaanan speeding through the bombardment on a speeder bike, and the bombardment appears to be much closer in destructive yield to a conventional artillery barrage. Obviously, if turbolasers were even very conservatively carrying megaton yield effects, one shot would have put Kaanan and a 10 mile radius up in irradiated smoke.

I’m new here and have no idea if ya’ll love, hate, or don’t care about shows like Rebels and Clone Wars – but if as a thought experiment we took that scene as a canonical example of turbolaser power…how would that prompt us to rethink everything about space combat in Star Wars? Just feel like this is an interesting case study.

For anyone who cares, here’s my rationalization, because it actually plays into why I love this Victory Star Destroyer design:

Assuming that “blasters” and “turbolasers” are operating on a common plasma bolt weapon concept, I rationalize in my own headcannon that this type of weapon delivers its effect through both partical kinetic energy and incendiary heat energy, in a way simlilar to real-life shaped charges. This type of weapon is optimized for space combat, burning through armor and overloading shields, and [aired with a capital ship reactor as a power source, such weapons would have an unlimited magazine and high fire rate. But as a weapon oriented toward penetration of armor, it has a ceiling on its explosive or area destructive effects (this is why you don’t use as an anti-tank gun as a howitzer in real life). I’m guessing that a weakness of this type of weapon is that is bolt dissipates over time to the point of ineffectiveness, imposing a range limit. Additionally, I am imagining that a penalty is imposed on this type of weapon’s effectiveness by atmospheric conditions – so I’m guessing that a capital ship plasma blaster or “turbolaser” is much more destructive in space (lets say in the tactical nuke range, but focused like a shape charge) than it is by the time it gets to the ground, where it delivers conventional artillery effects. This would still be very tactically useful – they seem to arrive promptly, so a Star Destroyer could deliver immediate tactical fire support to a Stormtrooper squad, for instance – but not necessarily the weapon of choice for strategic bombardments. Incidentally, this makes sense of the video – Thrawn’s purpose is to tactically degrade the shield, not irradiate the continent.

So how are Star Destroyers vaporizing astroids or slagging planets? My rationalization is that main batteries like those we see on this Victory model or ISD-I’s are large mass accelerator turrets propelling plasma encased proton torpedo like projectiles (at higher velocities than a starfighter could fire one). These projectiles would still have a heat effect from the plasma encasement, as well as an nuclear explosive effect from the projectile’s payload. They would also not dissipate, so they would have a longer range in space combat, but slower velocity, so they would be more suceptable to evasion by smaller warships. But their warheads would be able to penetrate atmospheres and deliver megaton or higher explosive effects, which in a sustained bombardment, could definitely wreck a planet.

This Victory model really pairs a good balance of these weapons under this completely made up rationalization – 9 dual MAC turrets for long range space combat and bombardment, with a strong secondary battery of quad turbolasers for medium range space combat, and the additional strength of two broadside missile batteries for truly devastating closing barages or planetary meltdowns.

(this is just my own rationalization, I know none of this is “right”)

This. This now canon. Not head canon but canon in the EU, OT, PT. (Fuck Disney).

The problem is so many people, organizations, and governments are in bed with Disney. However I would not be so quick to dismiss all their work, some of it is quite good in my opinion.

There’s a major difference in how a turbolaser directs energy vs an equivalent yield nuke or even chemical explosive. Explosives have MUCH more blast effect per joule of energy involved. That’s not to say destructive power – the heavily armored target of a gigaton turbolaser might get *vaporized*, while a target of a gigaton nuke might be intact if irradiated, because the vast majority of the energy in the nuke goes into the effects around the target rather than into the target itself. If you want to damage relatively flimsy buildings and infantry in the field, you’d use explosives over turbolasers. But if your target is at all hardened (shields, armor, etc.), then you use turbolasers because it focuses all of the energy you spend into the target (if it hits).

Also, Rebels can’t even make an accurate star destroyer. Trying to calc stuff out of the FX there I think is not really worth the time, regardless of how good the show is. Just my take on it.

Thanks for your thoughts!

A thought on this, pulled from the Honorverse: with the SWU demonstrated ability to manipulate gravity, perhaps warheads could use gravitational lensing to focus an omni-directional blast into a cone, similar to a shaped charge, but using a powerful, momentary gravitic pulse to shape the blast instead.

Looks great. Love these new renders. Say.. A full combat Venator would not be amis in this line up.😉

Is it a Victory I or Victory II

You can tell it’s a Victory-I because it has concussion missile tubes on the sides; the Victory-IIs dropped the missiles in favor of ion cannons.

oh damn. big boys then. I wonder if they could do multiple smaller missiles per tube?

Solid question. I wonder what sort of payloads besides Concussion Missiles would be loaded. Cluster munitions?

Hi, I just wanted to ask anyone who knows where the two different concepts of the Victory’s superstructure and bridge come from. Most depictions in video games and books show a scaled-down ISD bridge, with a sort of nose tacked on in front. Fractalsponge’s model has a wider, flat bridge, with a much blunter nose. I would imagine the former came from either artists and sculptors recycling components from the ISD, which leaves me to wonder where the latter originated. Is it just a different variation for art’s sake, or is there some other reason?

The original Victory I think came out WEG, if I remember right. Definitely had a shrunken ISD syndrome in design. Whether that’s deliberate design conservatism or lack of imagination, who knows? With mine I was trying to sort of call back to stuff like the protruding bridge and ISD-like superstructure but make it its own thing, structurally and aesthetically consistent.

The original mention was in the Brian Daley novel Han Solo’s Revenge, where the Victory is named and its armament is described in general terms. IIRC, it was never explicitly described as a wedge-shaped vessel, but there was mention of it having a ventral hangar bay. WEG used the Daley novels as the source for a lot of things (the Z-95 Headhunter, bowcasters, swoops, etc), but they were the most likely culprit for deciding to make it a murderwedge. They also were the ones who put the emphasis on making it a planetary attack platform.

IIRC…this was the inspiration for the Victory-class. Concept art for the SDs in the movies.

Visual inspiration, certainly, but the concept art wasn’t called the Victory until WEG decided to mash it up with the Victory from the Brian Daley novels.

Beautiful … but tell me, aren’t the engines the same as in Fulgor frigate.

More or less. Not exactly the same but really similar. Tells you something about just how fast the Fulgor is 🙂

This Victory is a true Victory!