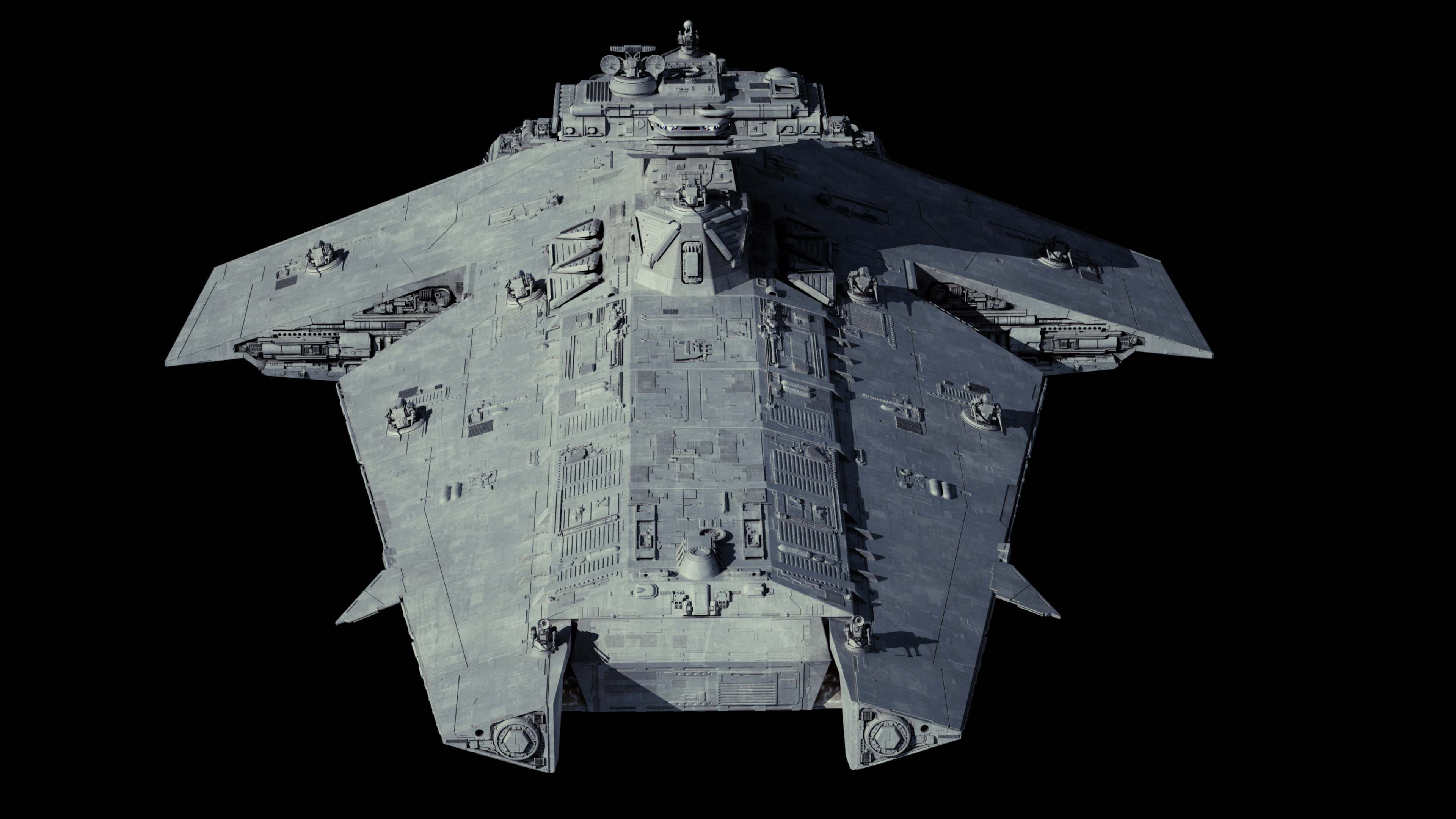 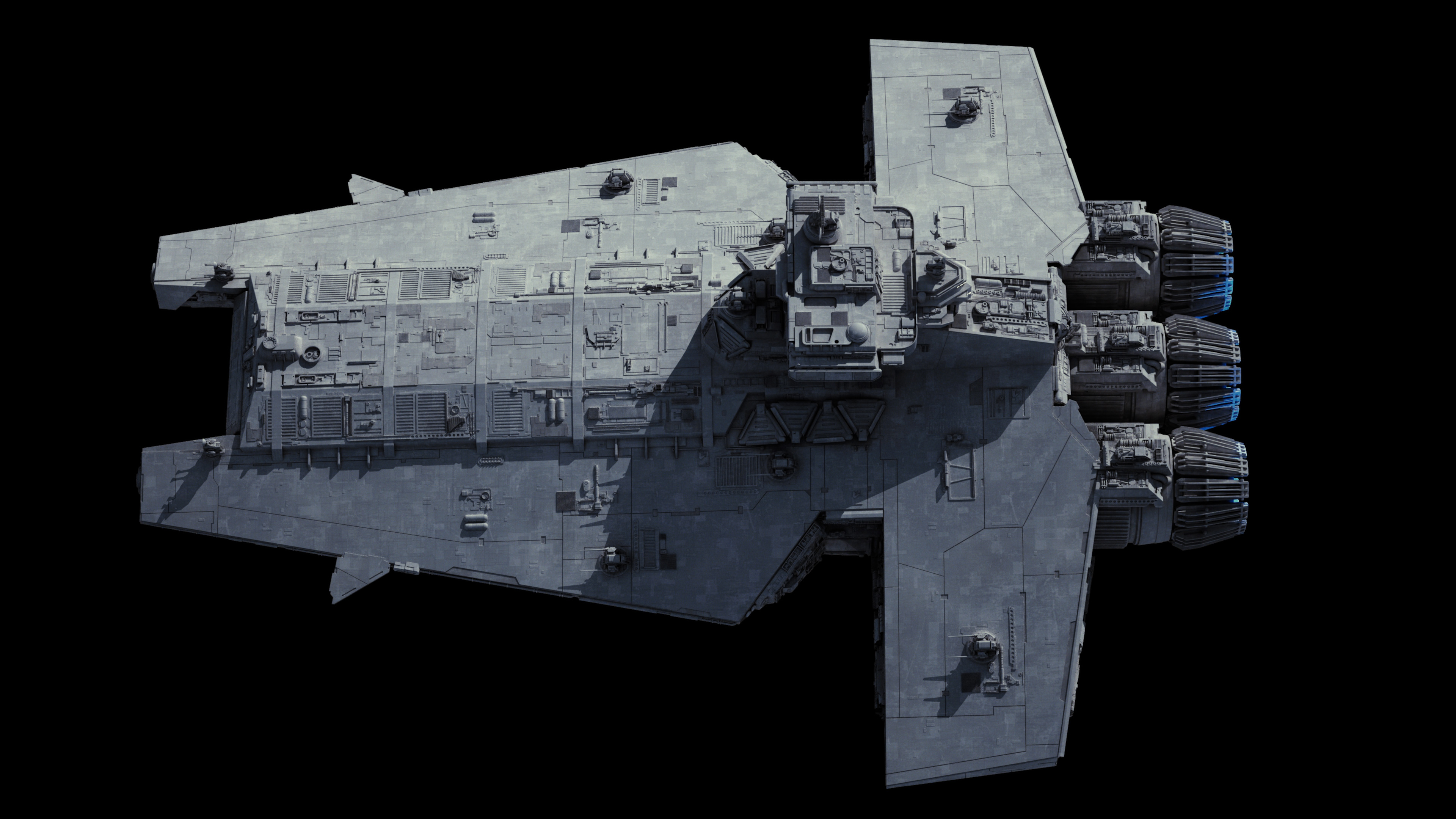 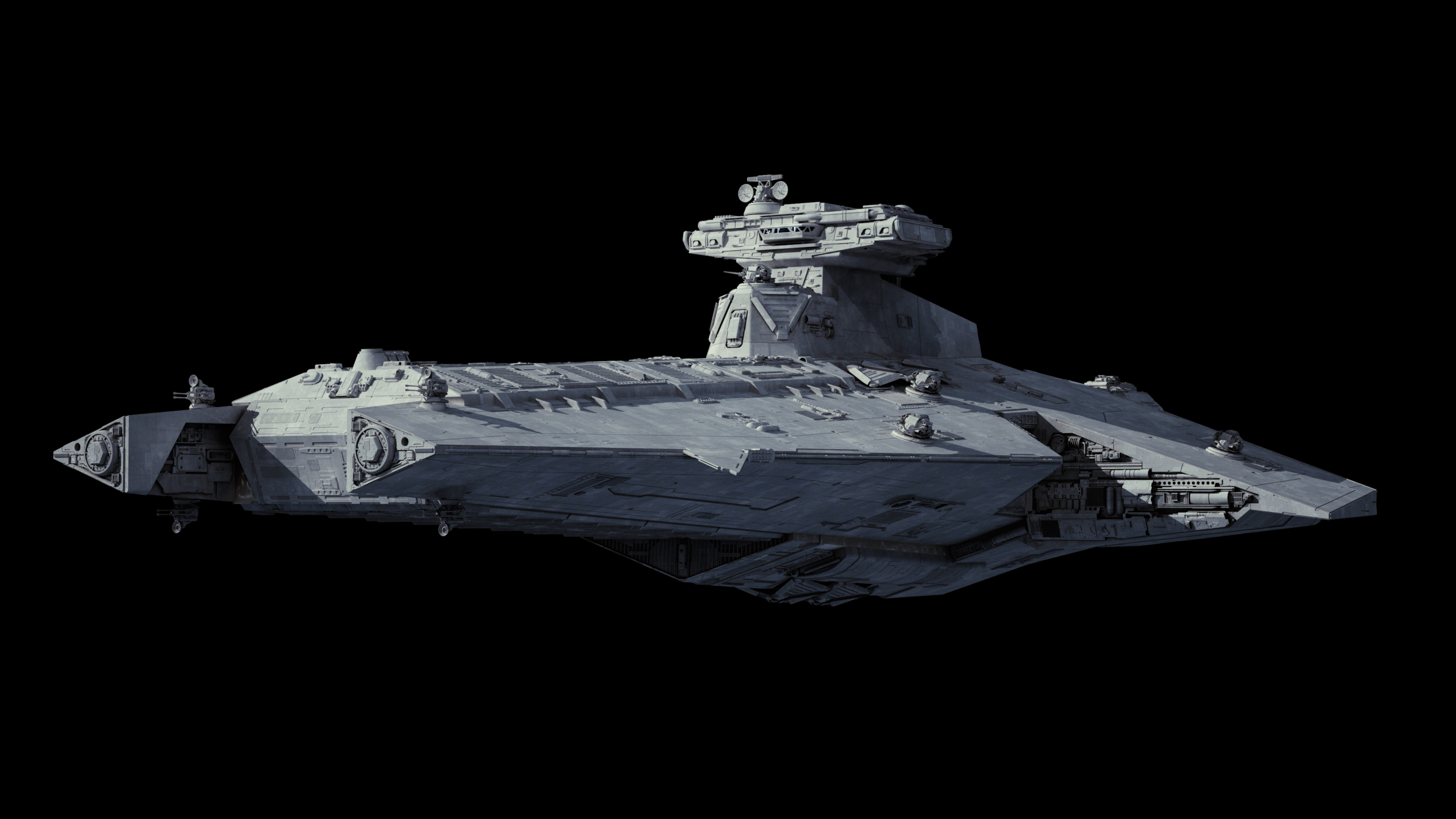 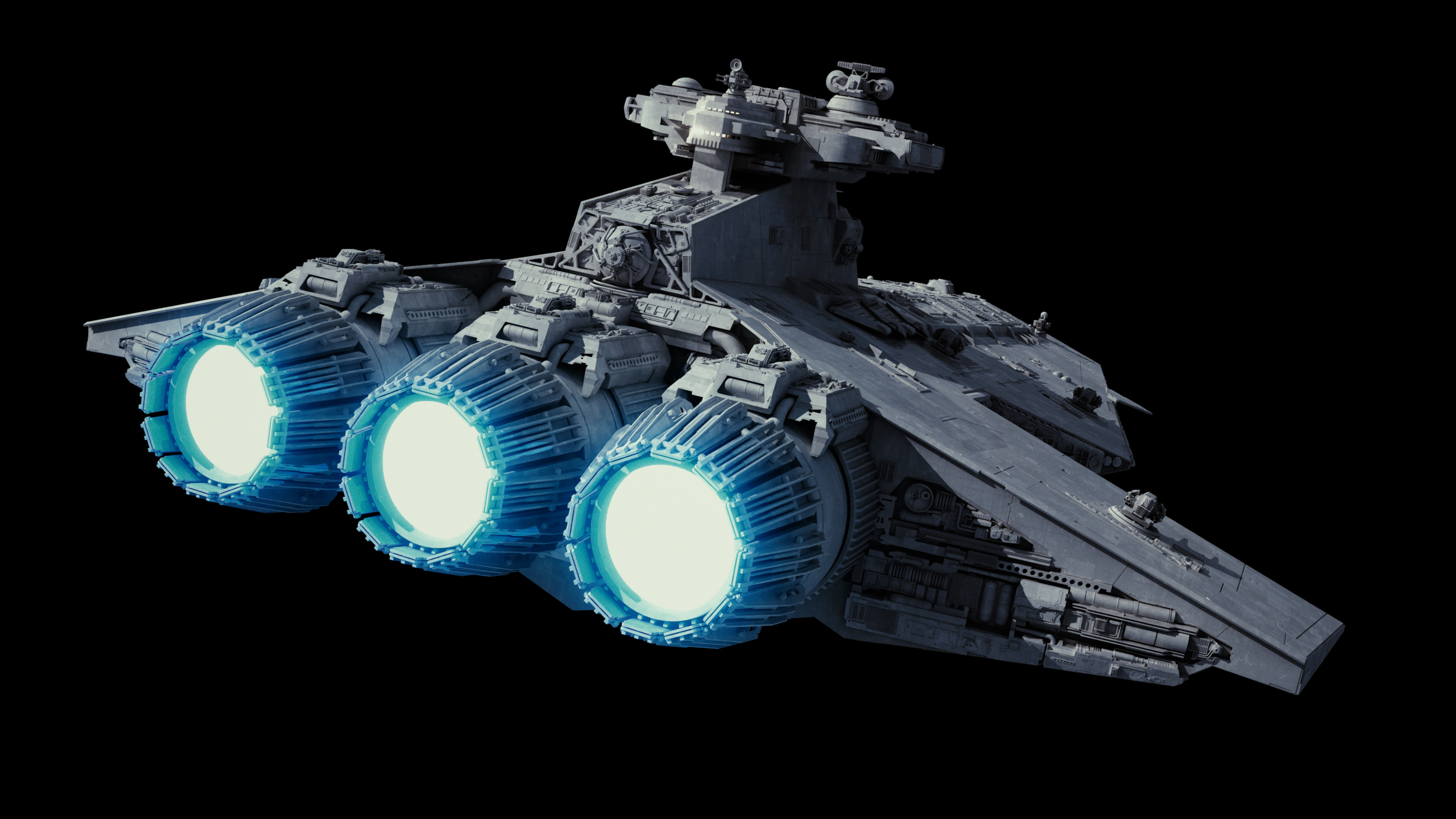 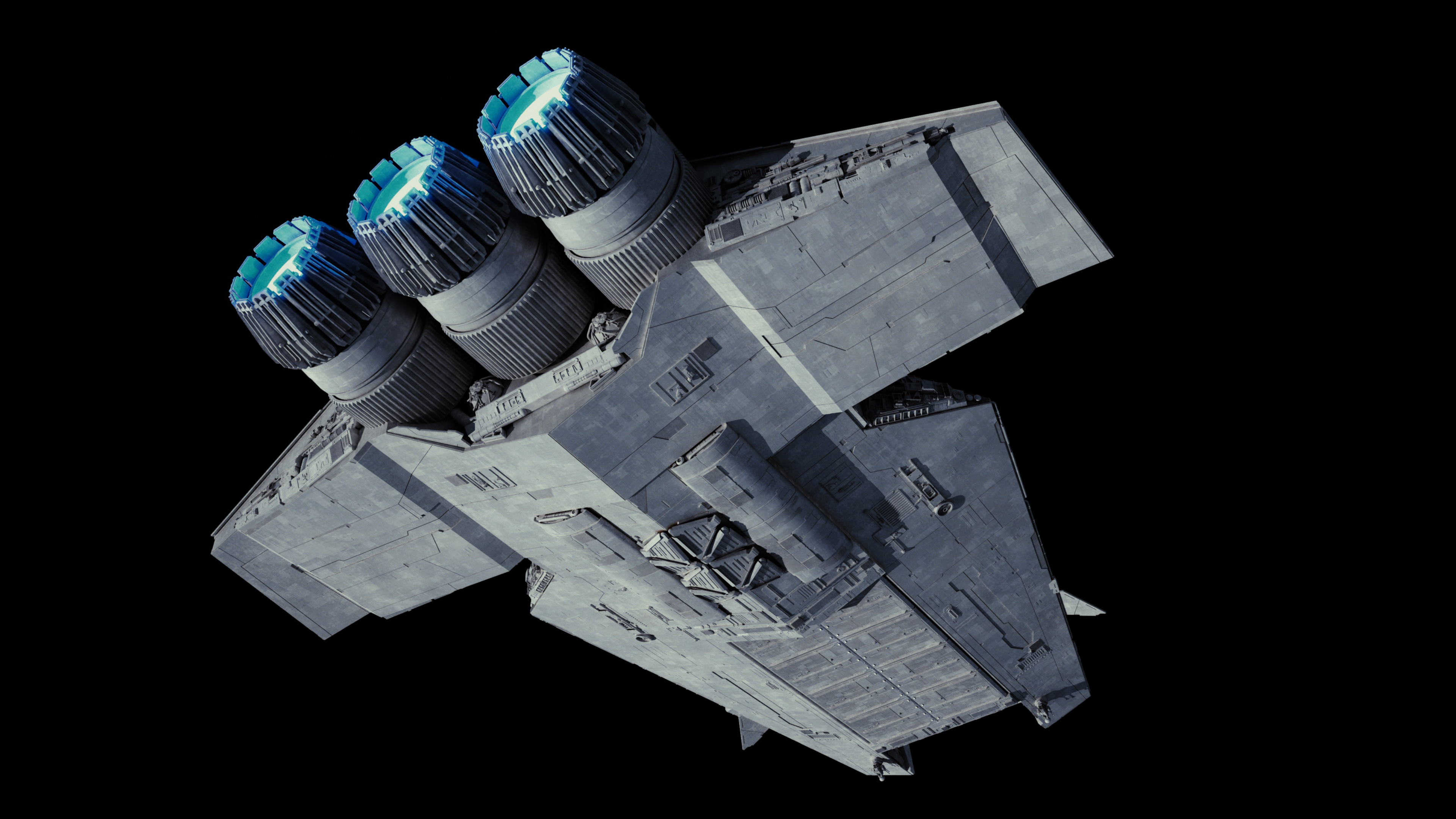 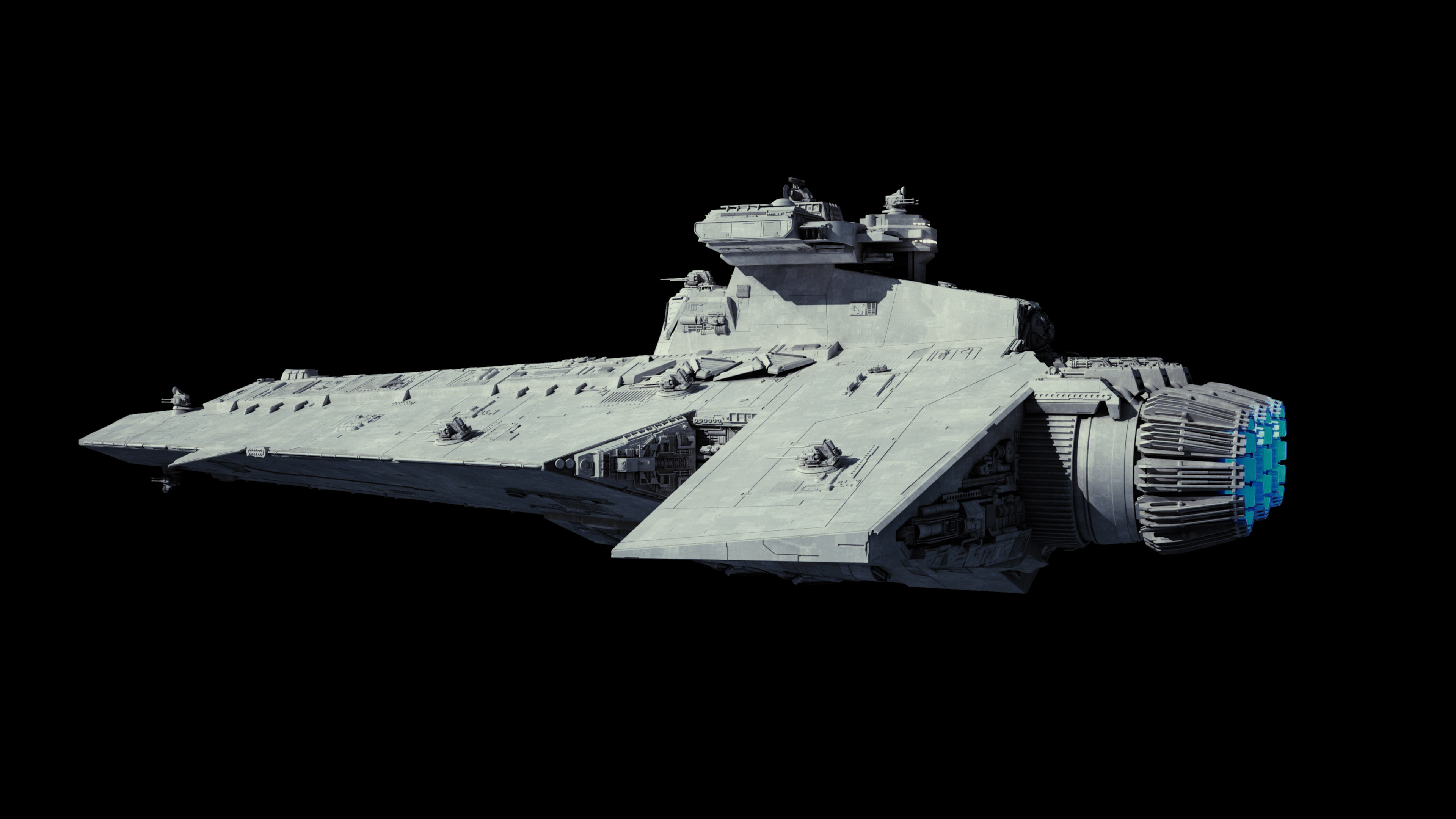 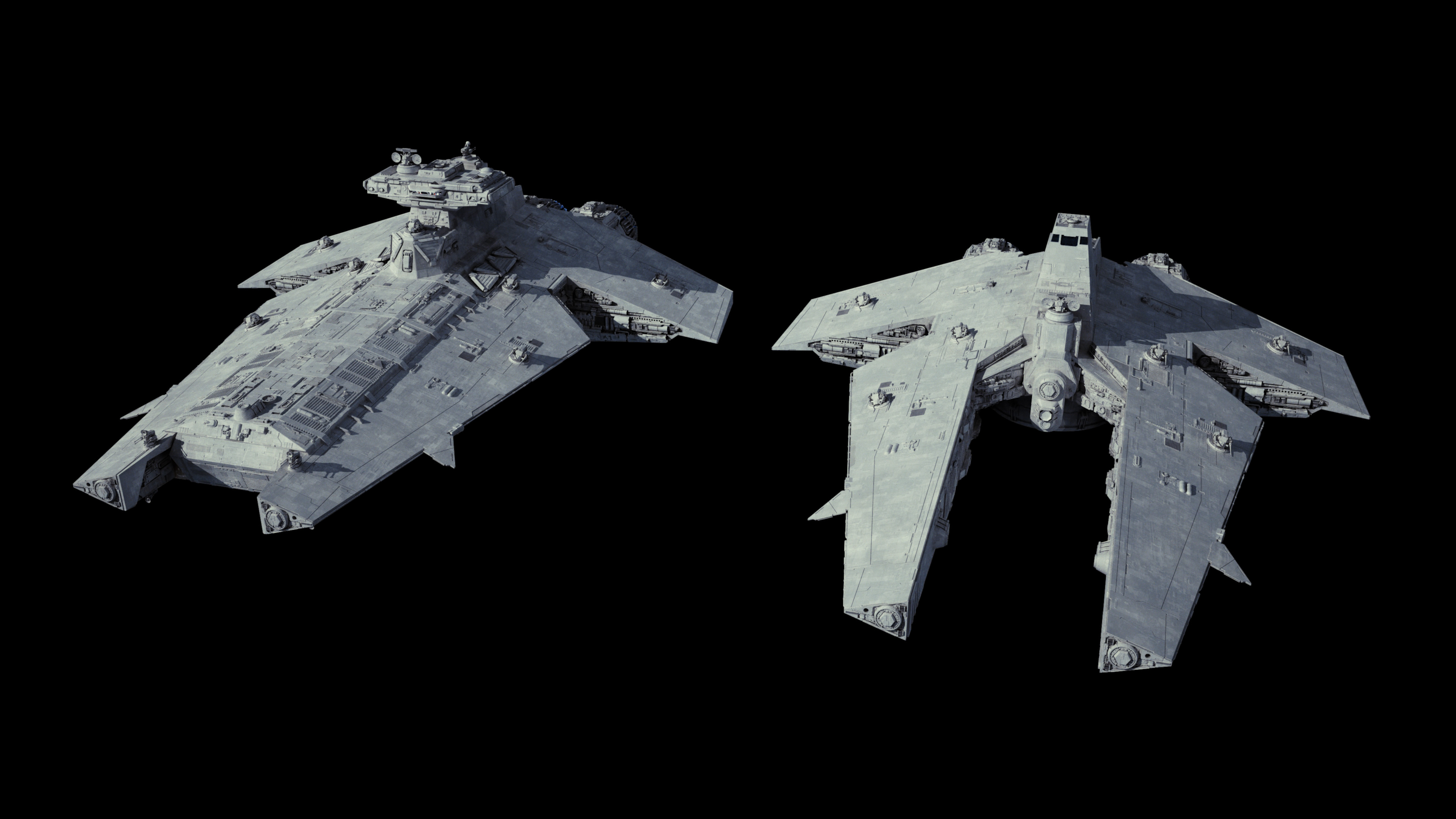 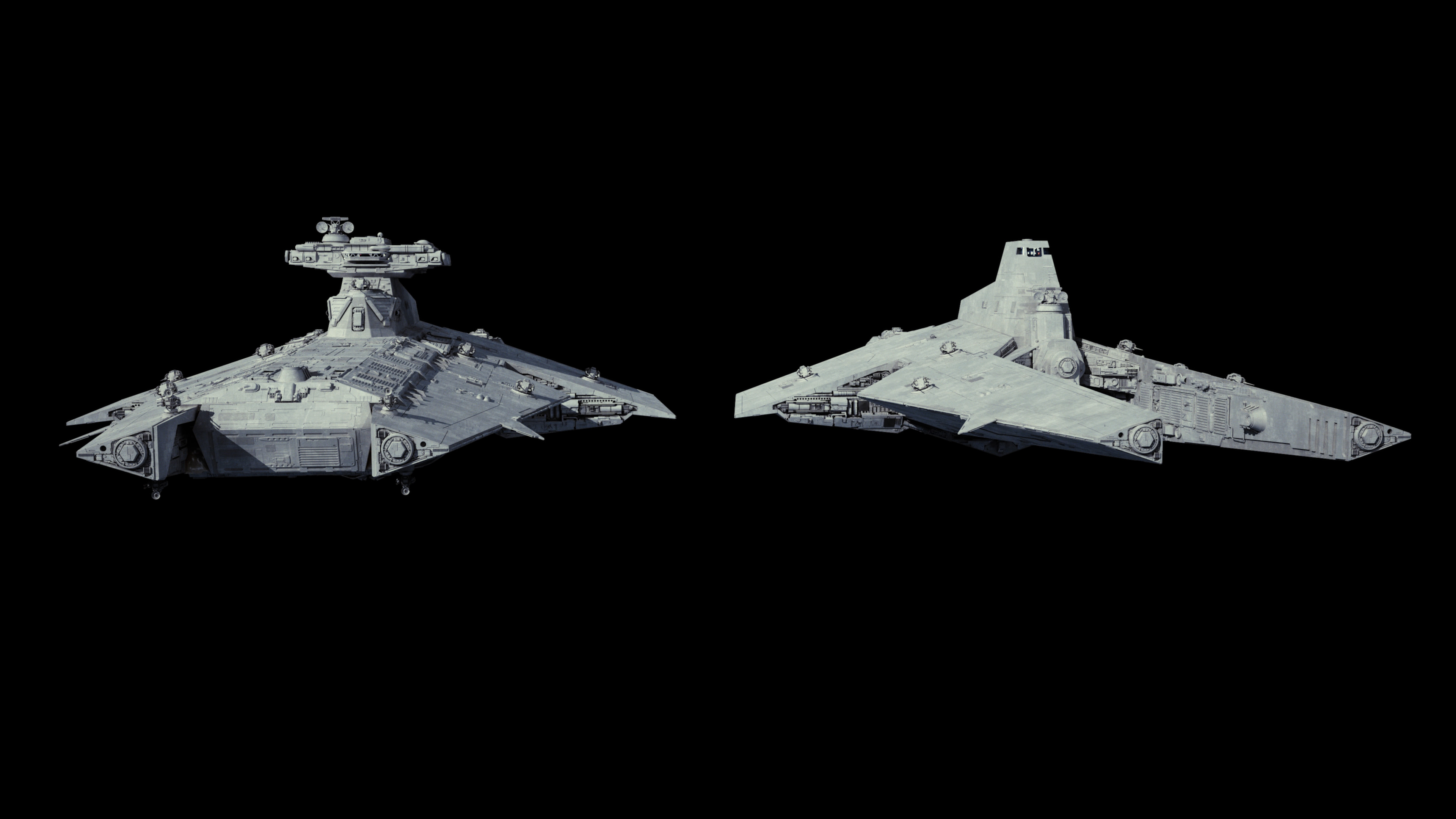 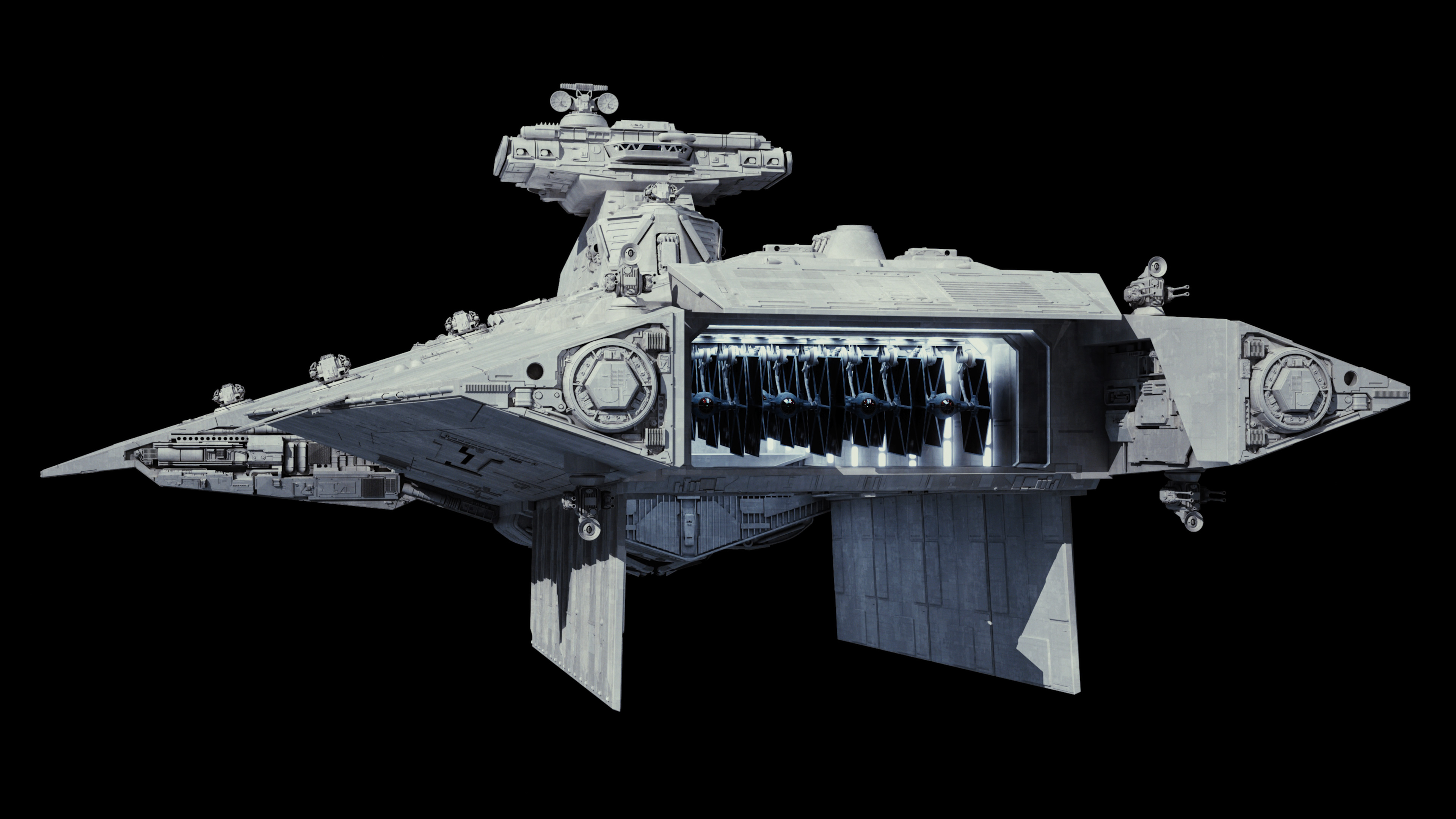 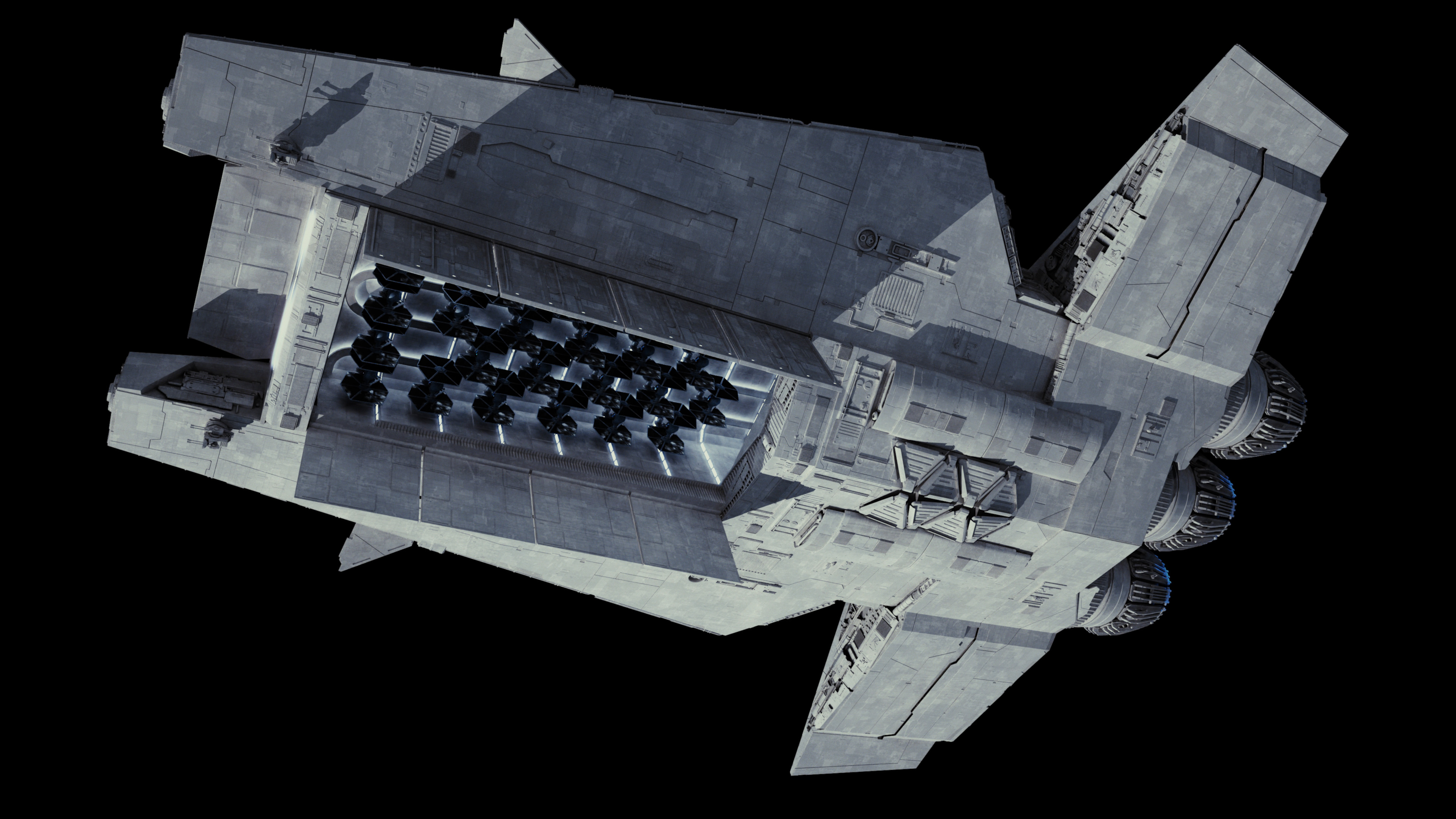 I gave it a name: Protector-class Escort Carrier

The Protector-class Escort Carrier, also called Protector-class Corvette, was a corvette/carrier hybrid employed in 15 BBY by the Imperial Navy as a reaction to early rebel and pirate raids on imperial Shipments.

Is this more of a carrier or a support craft

look at the second 2 last image, and take in too account the battery’s on the top, and bottom and compare the sizes to the tie fighters.

Besides, as a customs corvette, it is designed for patrol, interdiction, and law enforcement duties, not as a dedicated fleet ship. It would primarily be facing civilian and pirate craft, not particularly well armed adversaries.

why front and bottom hangars?

Honestly, it looks like something the Rebellion would come up with after capturing some customs corvettes. Trying to make a ship that could help service starfighters.

Now that I can see it on my pc instead of my phone I must say I LOVE the new bridge. Excellent work my friend. I now prefer this version over the standard customs corvette.

Is this a modular design? I.E. is the TIE rack a module between the front prongs that can be switched out with other modules for different applications? Because if so, this seems like it would be a great replacement for a Gozanti

Not too much space for supplies or any maintenance installation on board for that rather large contingent. I presume more an in-system patrol ship that don’t move beyond that one area?

So the idea of a custom’s corvette is to blockade incoming traffic to planetary bodies or hyperspace lanes. Think “Airport customs” where they ask “why are you here, what are you bringing into the country, bla bla bla” and then apply this to starwars planetary fleet security forces. The main bases are planetside, the Tie Fighters are serviced there, but are flown into orbit via the Corvette to be on direct action station if need be.

This version i guess would be used in Imperial systems that contain major shipbuilding yards and/or fleet bases, where the original Customs Corvette is used as Zeoinx described.

I think though, I could be wrong, that Fractal did this revision more to illustrate how many fighters you can pack into a 180m long ship.

People still don’t think you can fit 2 squadrons of TIEs in a Nebulon! 😛

Interesting design. Fighters can not be based there due to the lack of space but it is perfect way for short jump with the fighters into the combat. The only thing that I see is the unability of the ship to carry anything other than TIE Fighter and maybe TIE Interceptor. TIE Bomber seems to be to large for it already. Am I right?

Bombers are no problem, unless they are wider than 4x TIE fighters 🙂

I did not think that this TIE deployment system can be combined to use half of one row and half of the other. How many TIE bombers could be fit inside? I will suppose 8? (2 rows of 4 bombers)

The solution is longer hulled tIEs ot TIE/gts or bring back the prototype upgraded to new starndard so you have missiles, or take the TIE/SK1 body and modify for space since those ahve groudn strike ordinance. either way, the TIE/gt existed before the bomber and was a multirole TIE.

How does the front door area open. Up and down or side to side?.

It seems to be opened up only

That looks like a lot of fighters in a small area! I’d hate to be trying to escape that guy.