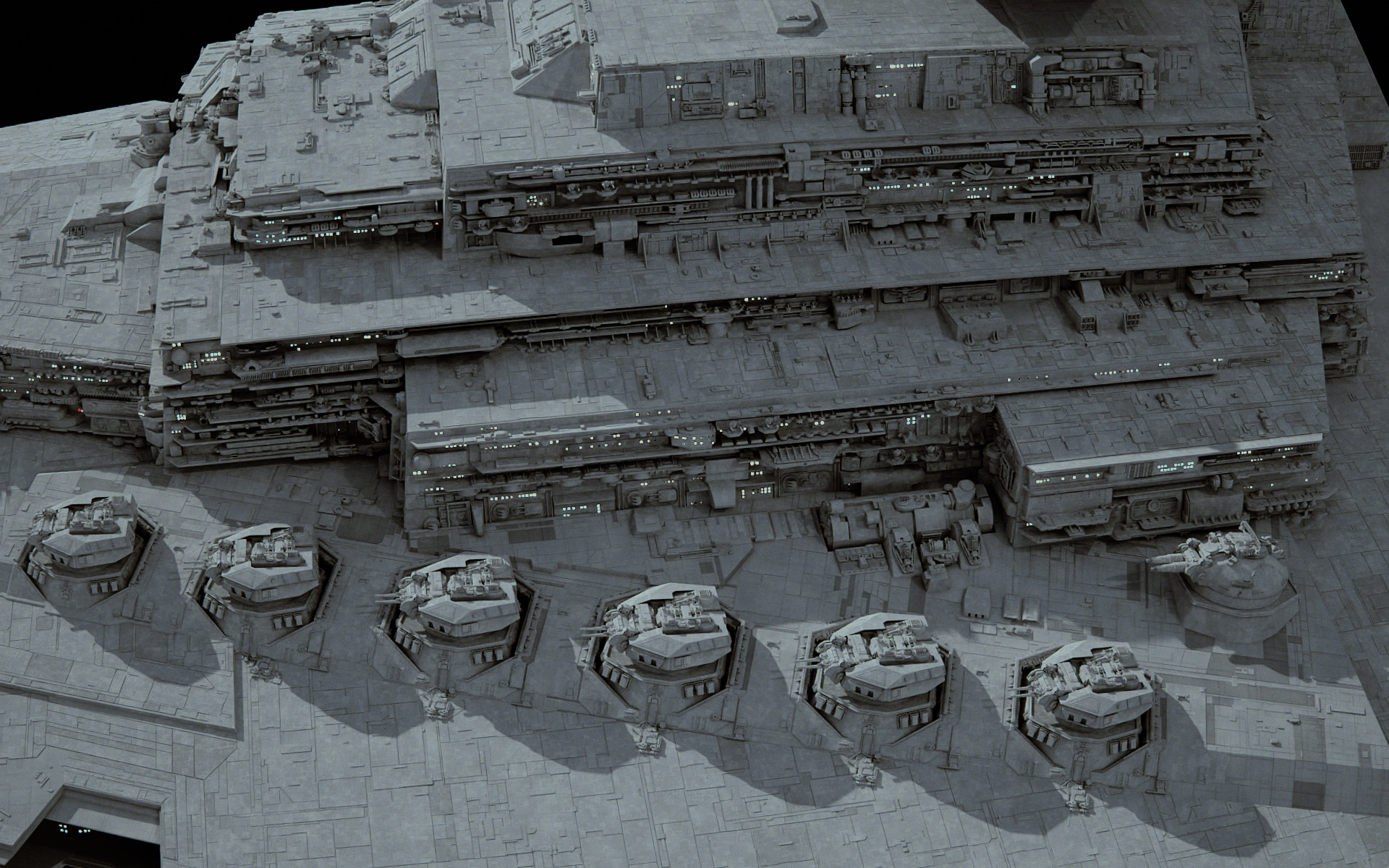 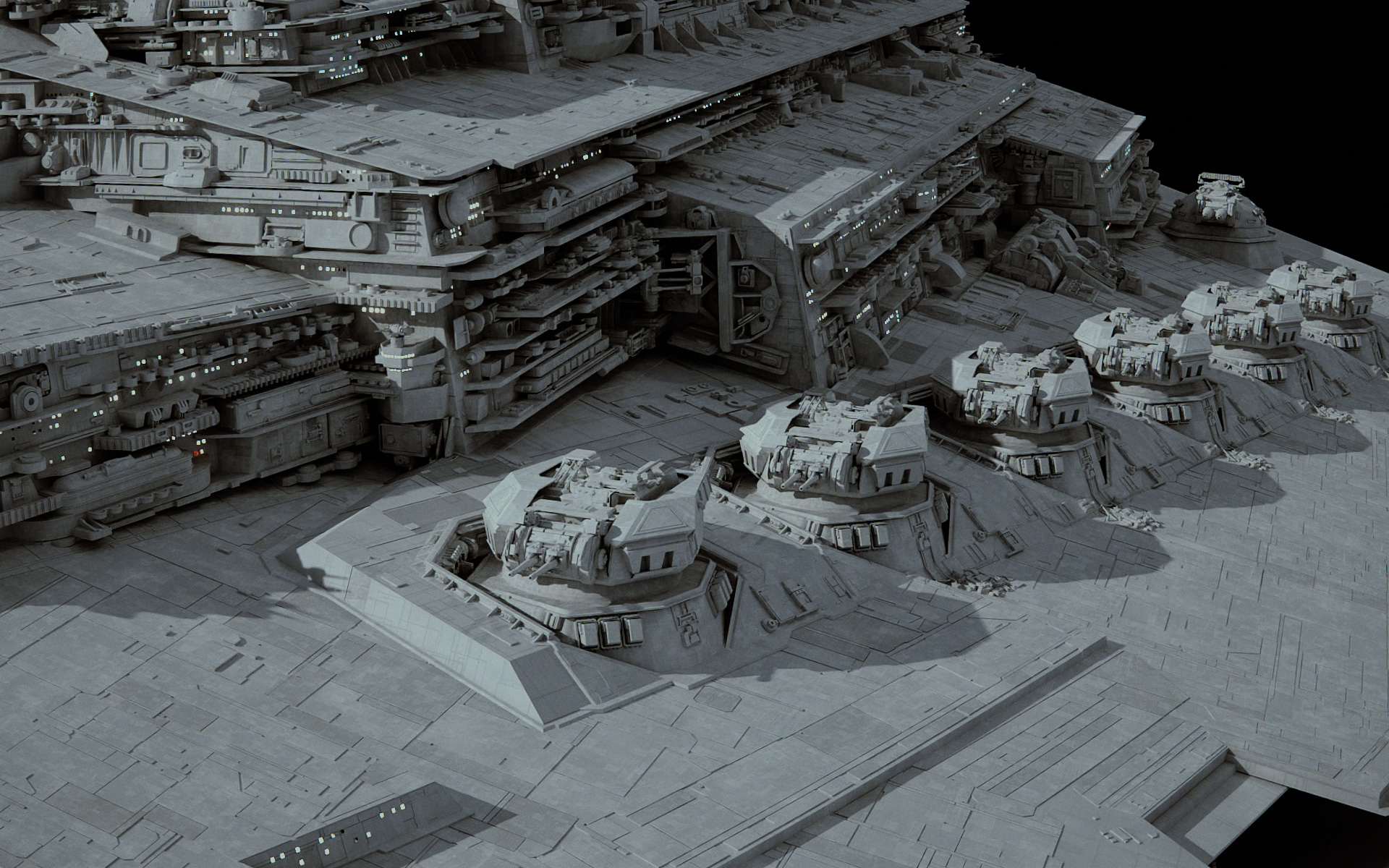 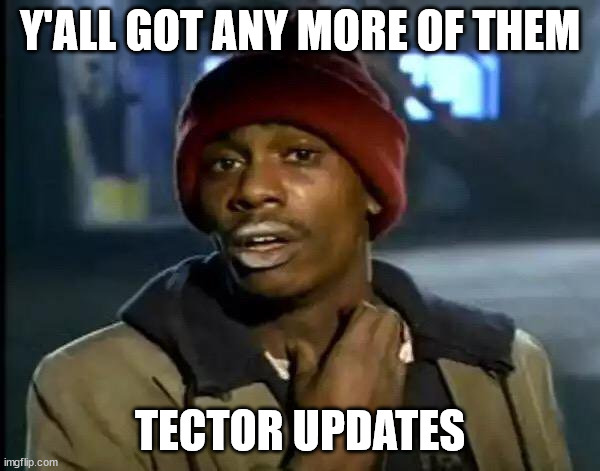 I’m happy for the gunners of that ion cannon since it appears to be superfiring over the main battery. Will the Tector retain the trench quad turbolaser from the ISD or will it have other weaponry located throughout the trench?

What is the thinking behind the semi-recessed barbettes of the main turbolasers? Is it for technical reasons or just because it looks cool? Because it certainly looks very cool.

How powerful do you think the reactor output of this should be? (Especially in comparison to imperators, ie how much difference does the missing hangar bay make for additional power generation)

It has a Venators auxiliary power plant in the hanger area, in addition to the Imperial power plant. Fractal gives the power generation estimate in WIP#1 or #2

From WIP #1: “Right now, I’ve modified the gut battery, and added a new terrace layer to bring a bigger reactor completely internal. This, along with say a Venator main power plant in the old main hangar volume, brings us to 1.7-1.8x ISD power.”

Its all coming along beautifully.

I’m wondering what kind of texture you are using. Im guessing those arent UVs, right?
Watever it is it looks great.

Just a procedural with different kinds of ambient occlusion to get the dirt effect, and a simple base bitmap.

That is some mightily impressive forward firepower.

I always thought the Tector was an obvious variant of the Imperial star destroyer, I would certainly want some in my fleet If I were an admiral. It makes perfect sense that at least one of these would be at Endor. Obviously it would not be suitable for independent action, so it is not as versatile as the ISD 1 or 2. However in a galactic empire it seems reasonable to have a range of specialized ships along side generalized ships.

Also, why would the Empire even need a Tector when they have the Allegiance?

The Tector is more specialized than the Imperial. The Imperial is very good at ship-to-ship combat and decent at carrying starfighters (72 TIE fighters) and ground troops (a legion of stormtroopers plus walkers). The Tector goes all-in on ship-to-ship combat. There are no official stats on the Tector (other than size since it’s just a redesigned Imperial star destroyer), so I don’t know about crew requirements, but it’d make sense that there would be fewer crew since there wouldn’t be any vehicle or fighter mechanics, crew chiefs, flight deck officers, etc.

But from my understanding, the Allegiance came along later in the Empire’s history, like after the destruction of the first Death Star (if at all since I don’t think the Allegiance is canon). The Tector is technically a Clone Wars design, so there wasn’t an overlap between the Tector and Allegiance until the Tector design was 20+ years old.

Yeah the Tector you could say is more a kind of hangover from the Clone Wars doctrine. You had the VSD be the gun and missile heavy hard hitter that did outgun the Venator, and outgunned other CIS ships.

So whilst this is headcanon, you could say when designing the Imperator for the Republic, they also wanted a harder hitting version that traded flexibility for firepower to counter the growing number of Providences and Lucrahulk BB conversions that normal Republic ships couldn’t take on in a gunnery duel.

also you could say that the later Allegiance is a holdover from the docrtine I mentioned below. For whatever reason the Imperial navy wanted a big anti-ship vessel, even though the ISD2 outgunned everything out there. Maybe its to serve as a heavy gunboat and command ship to save deploying a SSD or something.

Don’t be so sure that big ships weren’t still out there. Sep remnants with big warships were still running around for a solid decade into the New Order, or sitting in old depots undiscovered and forgotten. The Rebels had some big ships and were building/stealing more all the time, and then there are the absolutely gargantuan exo-galactic threats that Emps knew were coming.

The Sep remnants were a big deal in the early years of the Empire and big battlefleet engagements lasted quite a after Order 66 and the decapitation of the Sep leadership by Vader. Those fleets were big and had some serious Star Cruiser grade ships. Even after their defeat you could never be sure you got them all since so many big ships were built for the war and the galaxy is a huge place full of hiding places. Remember the Sith had practically made a game of hiding entire remnant civilizations and fleets for millennia at a time earlier in the Republic’s history, so it makes sense that the Empire would prepare for similar moves by the Seps or traitors seeking to restore the Republic.

Then you have potential threats in the unknown regions (off the top of my head you have the Chiss, Rakatan remnants, Sith remnants, Killiks, Ssi-ruuvi, Vagaari), plus the Vong who had been scouting the Galaxy for a few thousand years by that point and had already launched probing attacks against the Chiss and later the Empire of the Hand (Thrawn’s pocket Empire founded to protect the Galactic Empire’s flank from attacks from that direction). The Vong were bringing forces that would absolutely call for proper battlefleets of Star Cruiser and Dreadnought scale ships to defeat.

The Tector is a much smaller ship in terms of tonnage than the Allegiance, and probably shares a lot more components with the Imperial-class which might make it far cheaper to build. The lack of TIE wings and major landing forces isn’t a big deal if the ship is designed to operate as a fleet combatant, since there would always be other ships that could provide those functions. Even if operating alone it could simply have escort carriers attached as needed. Escort carriers are downright cheap compared to a ship this size.

I have been checking back almost every day. So excited about this one. Great work

Same! Glad to see anything new on this site.