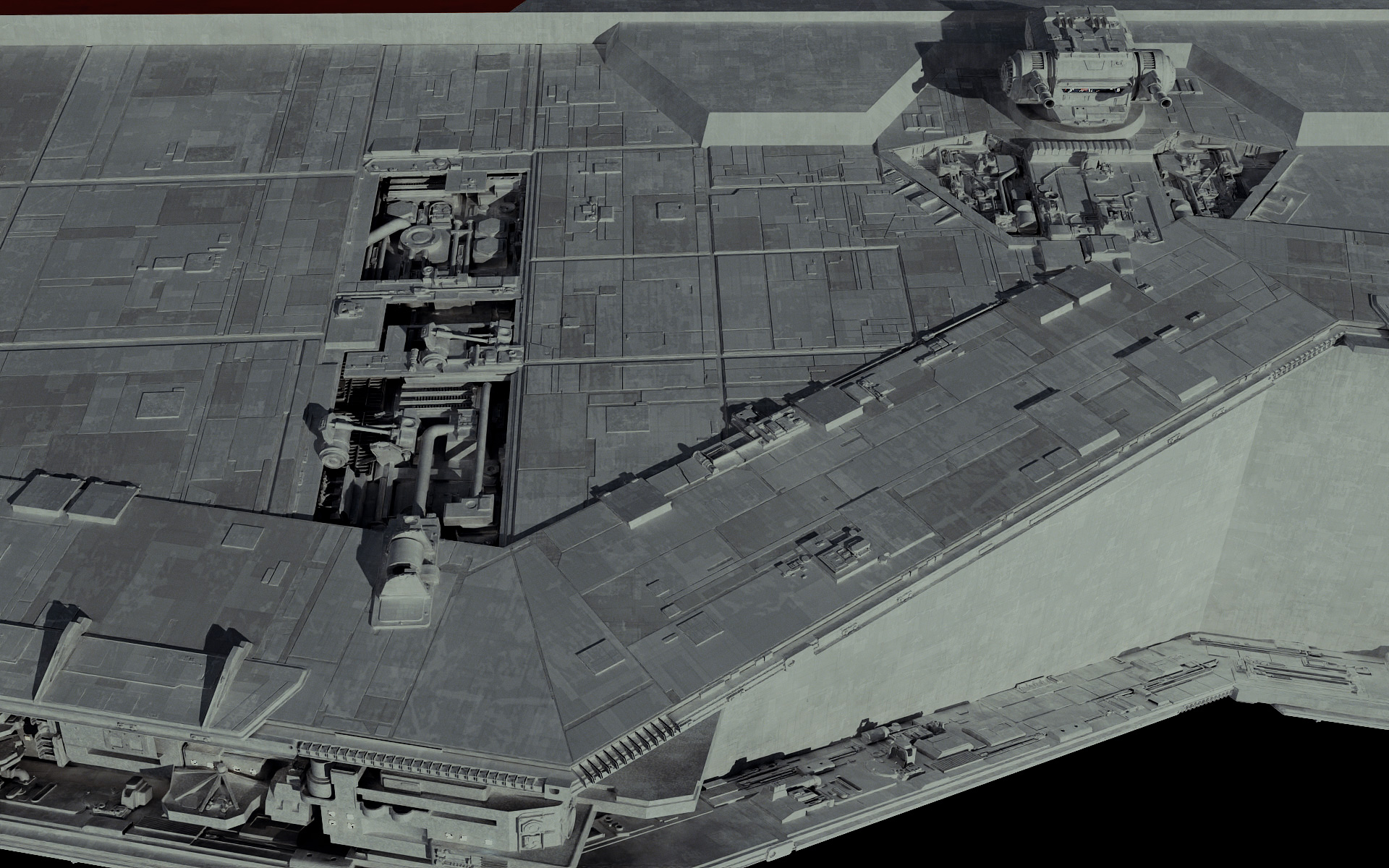 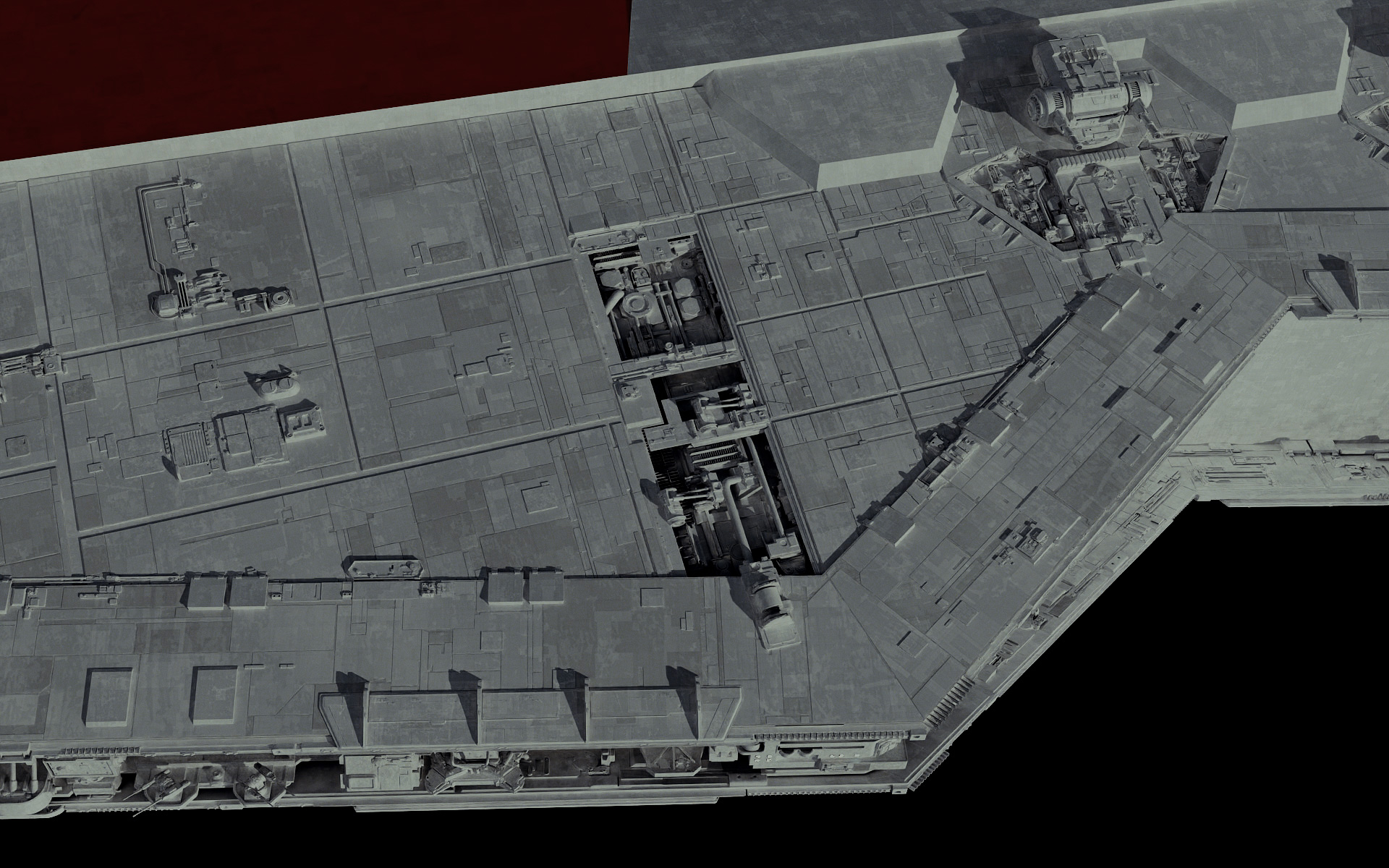 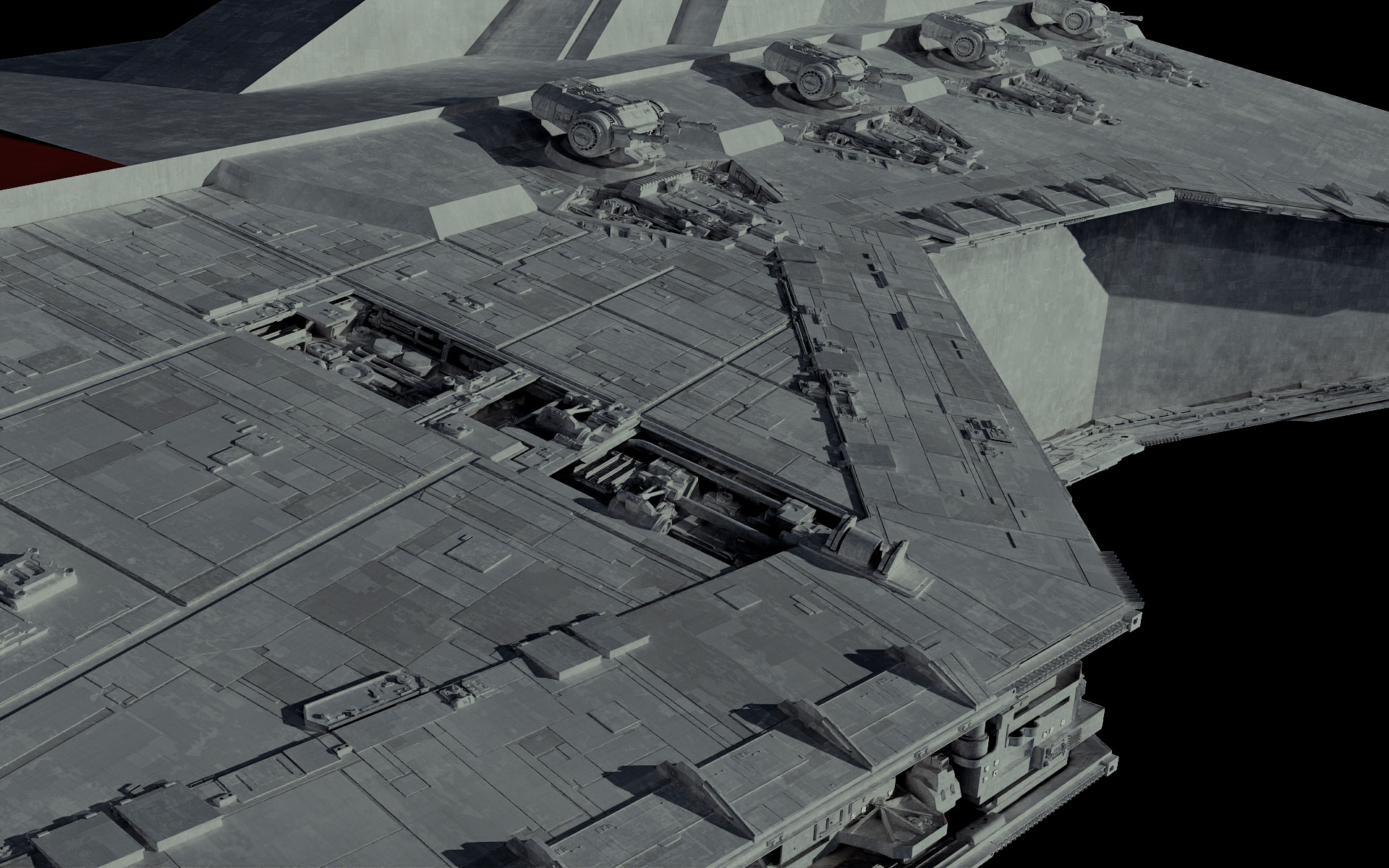 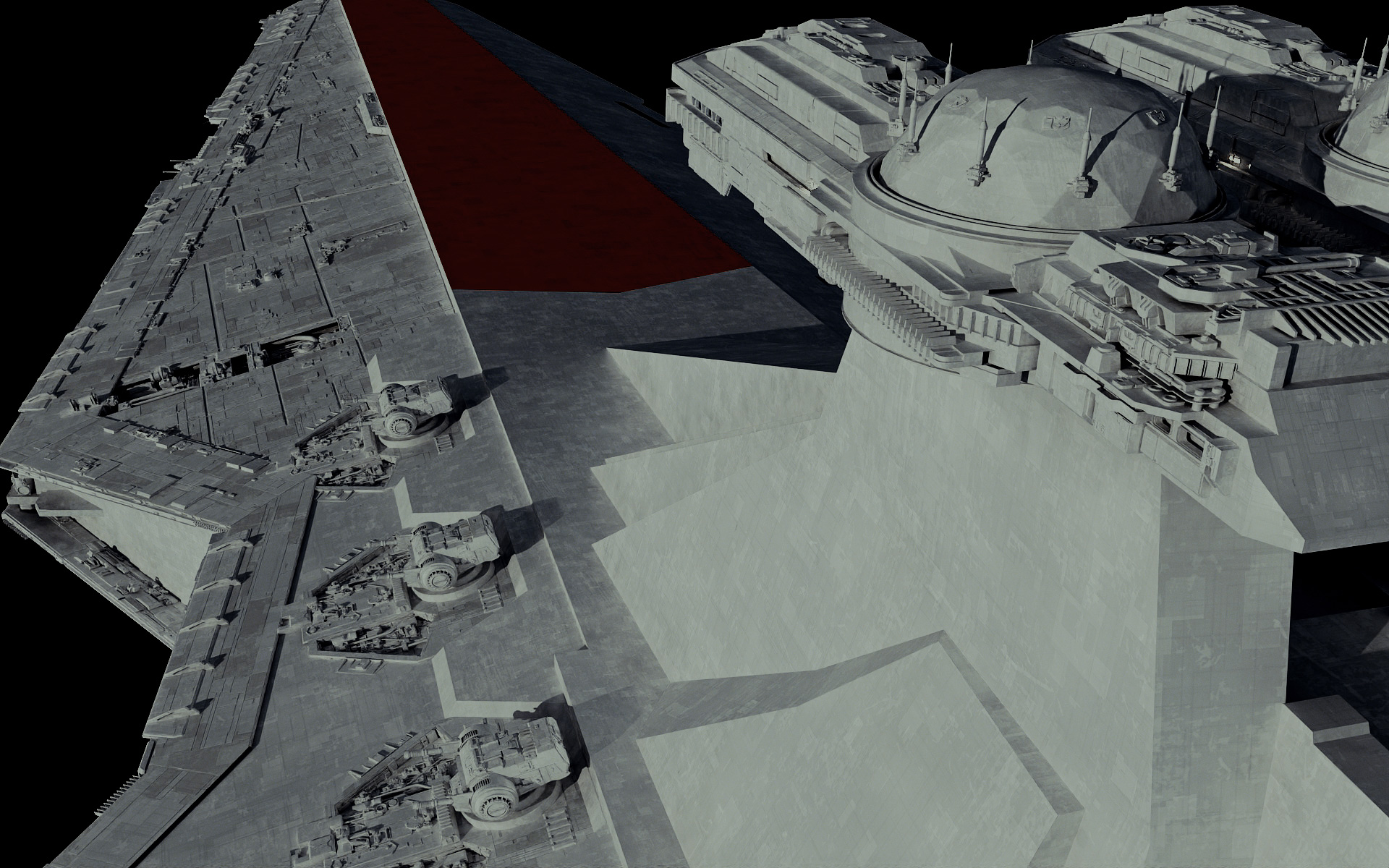 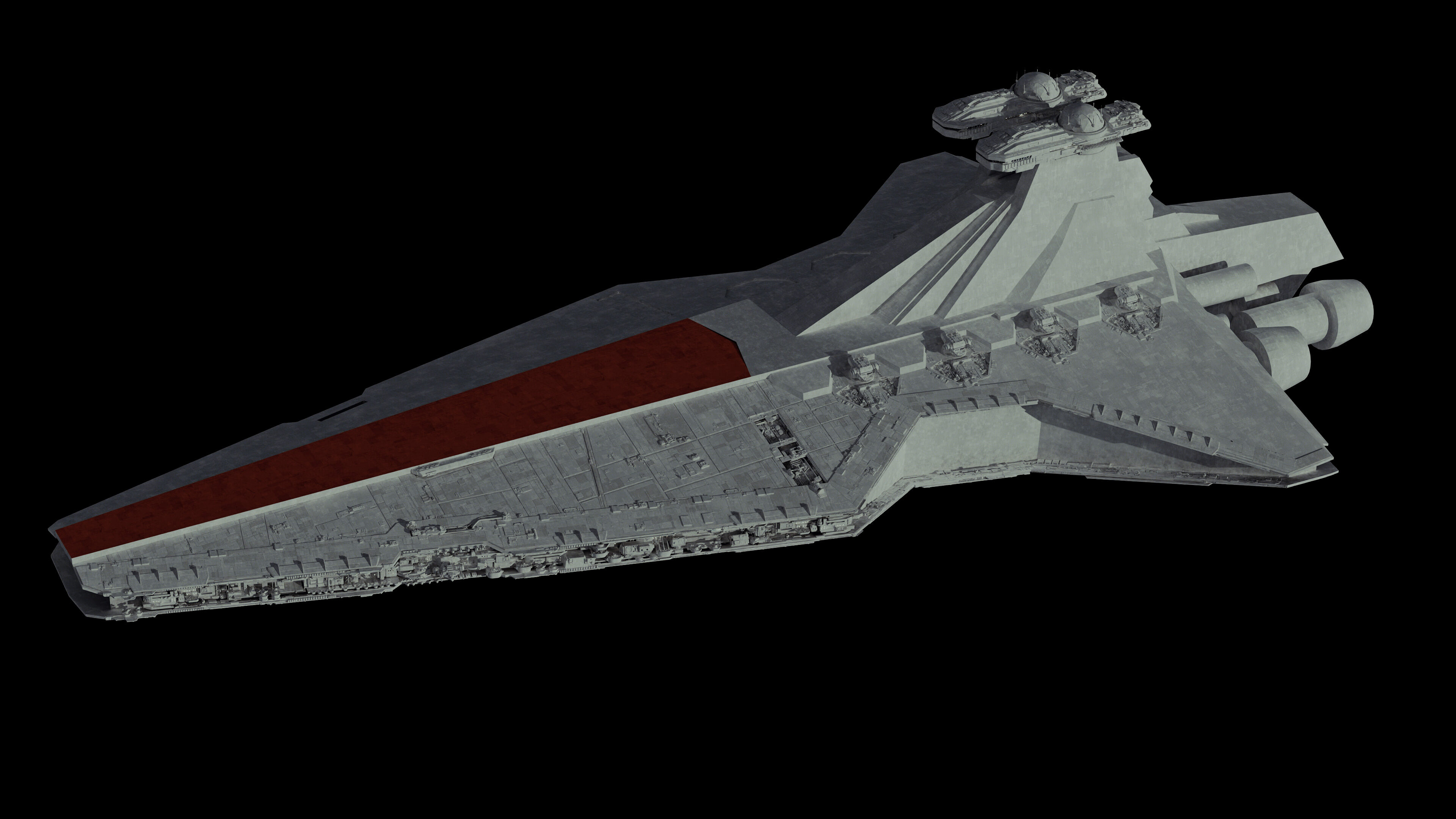 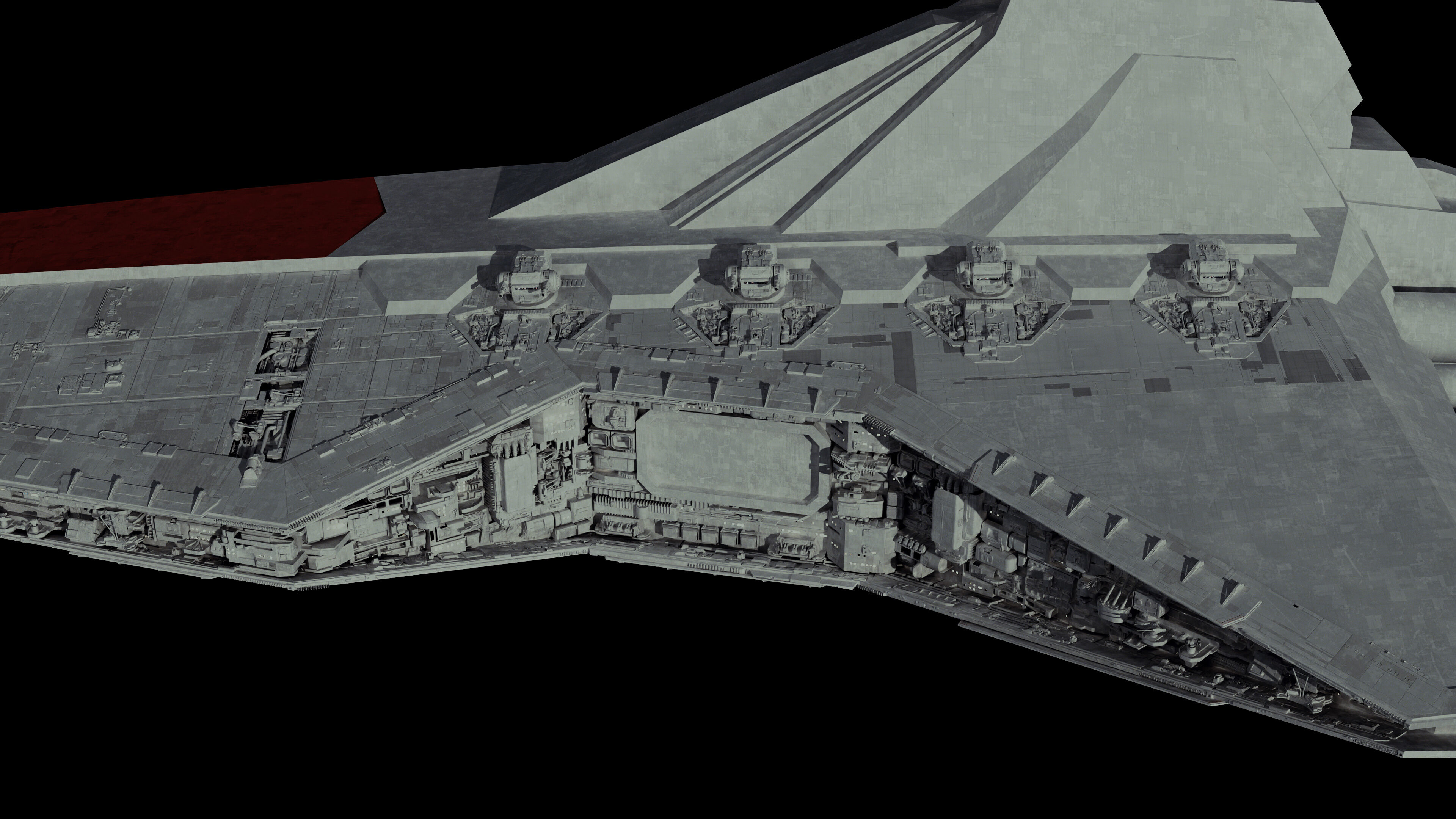 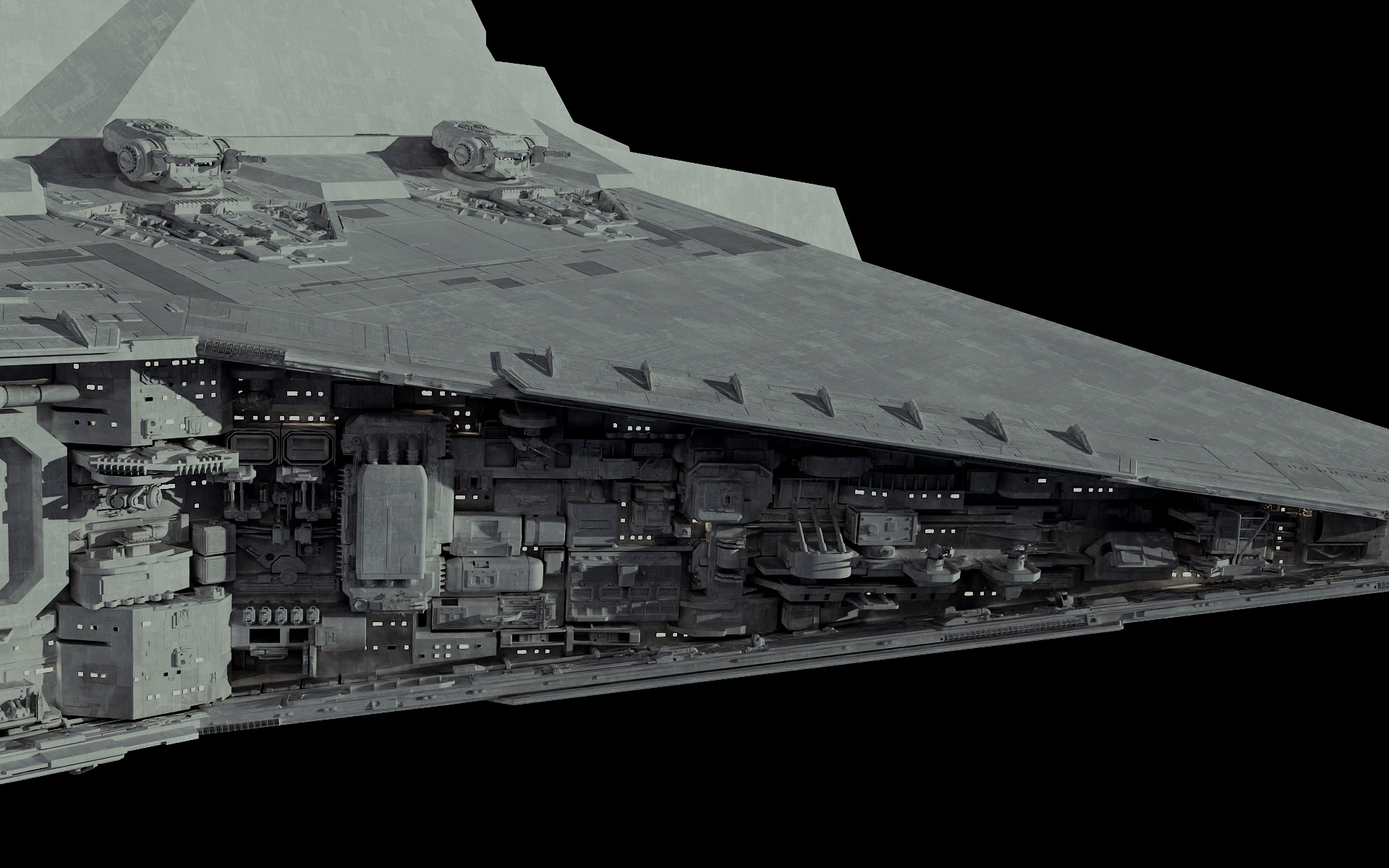 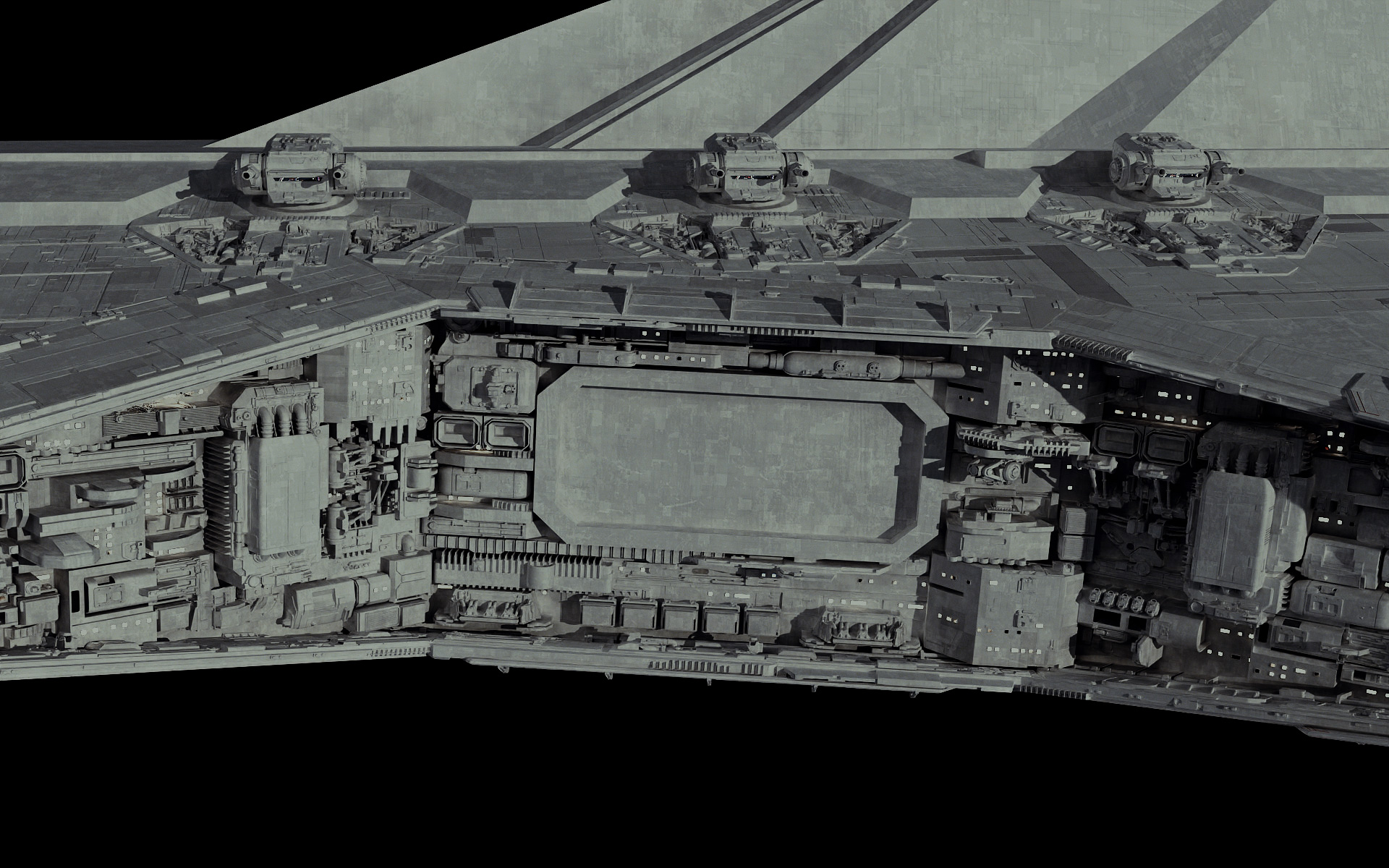 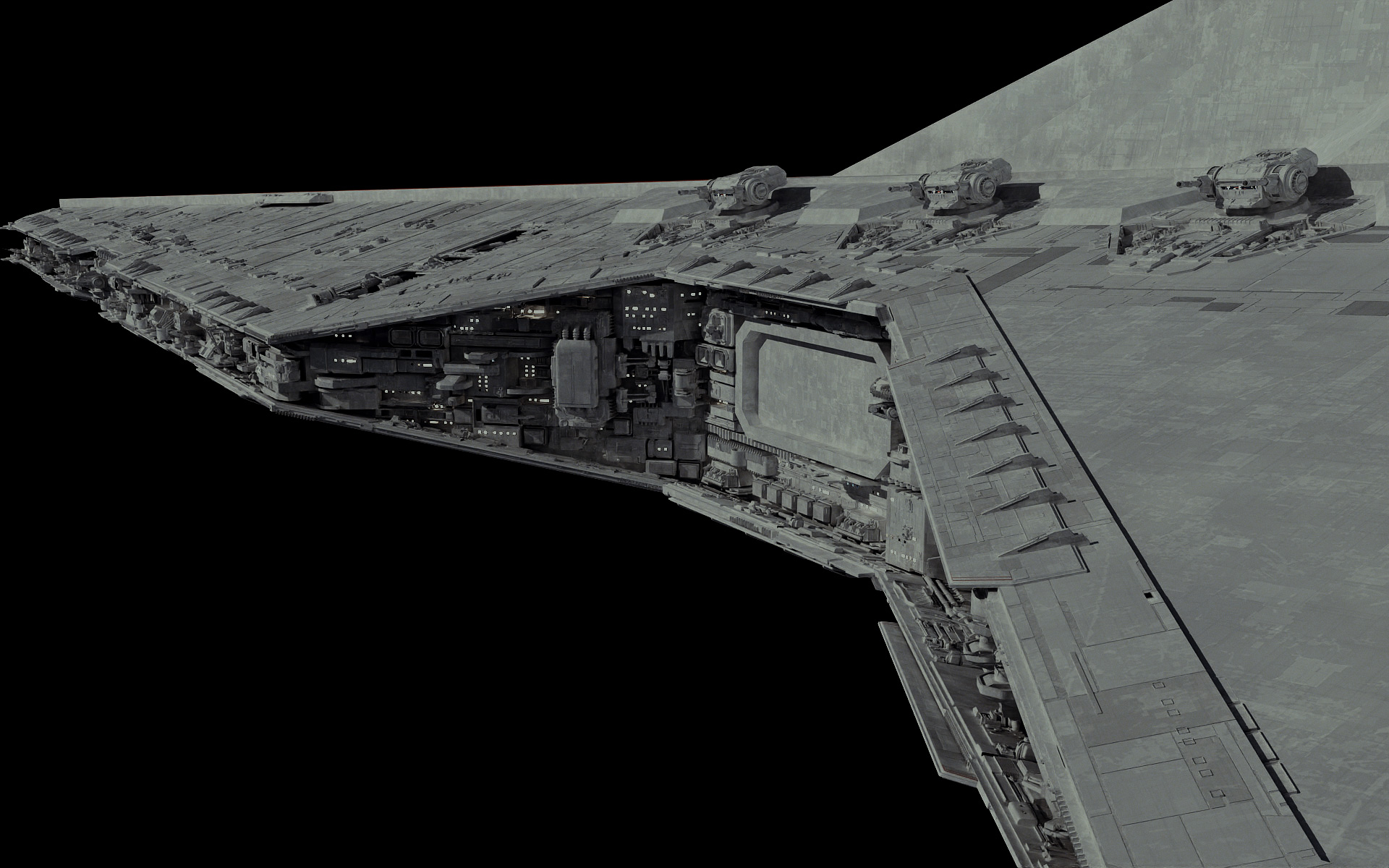 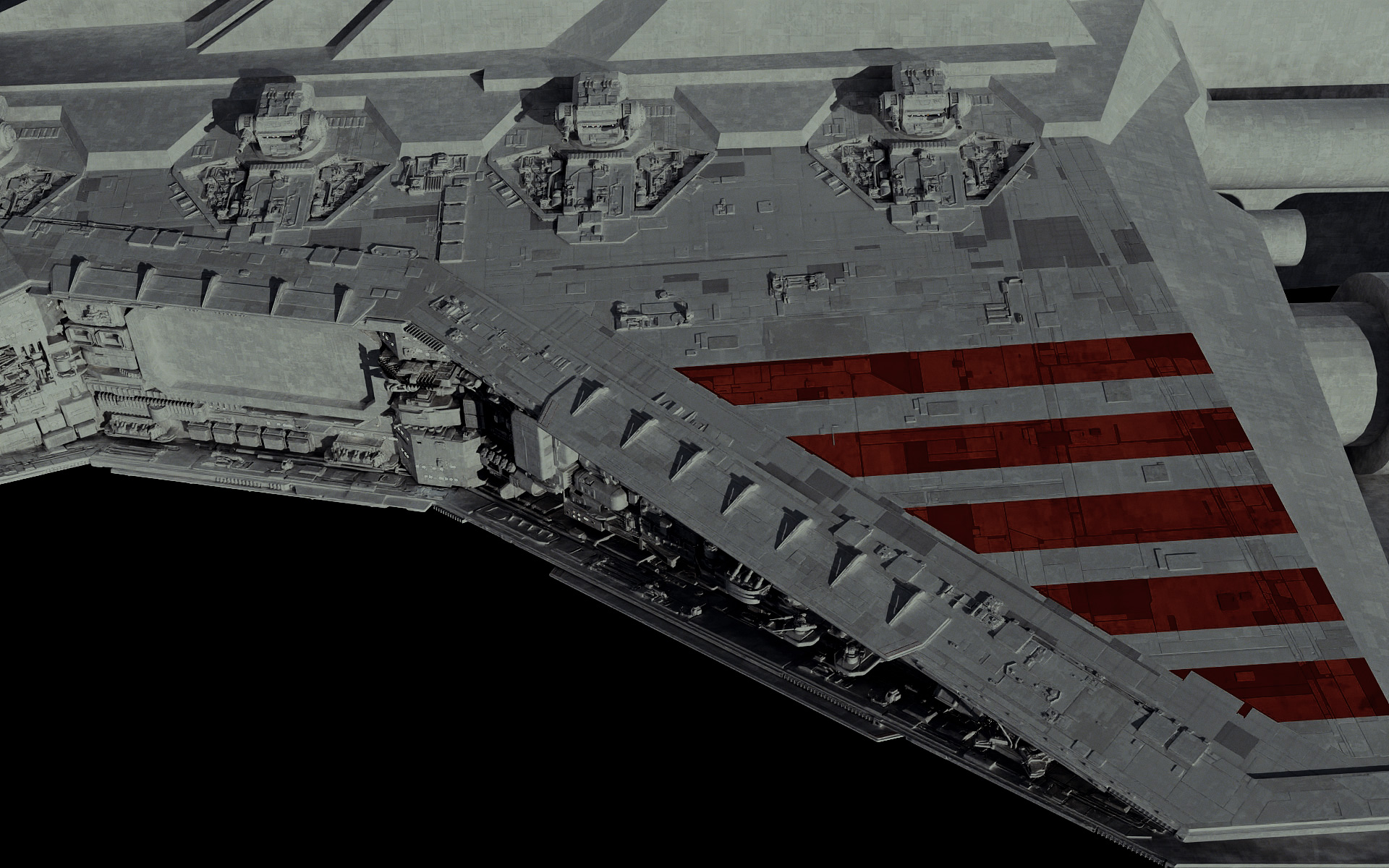 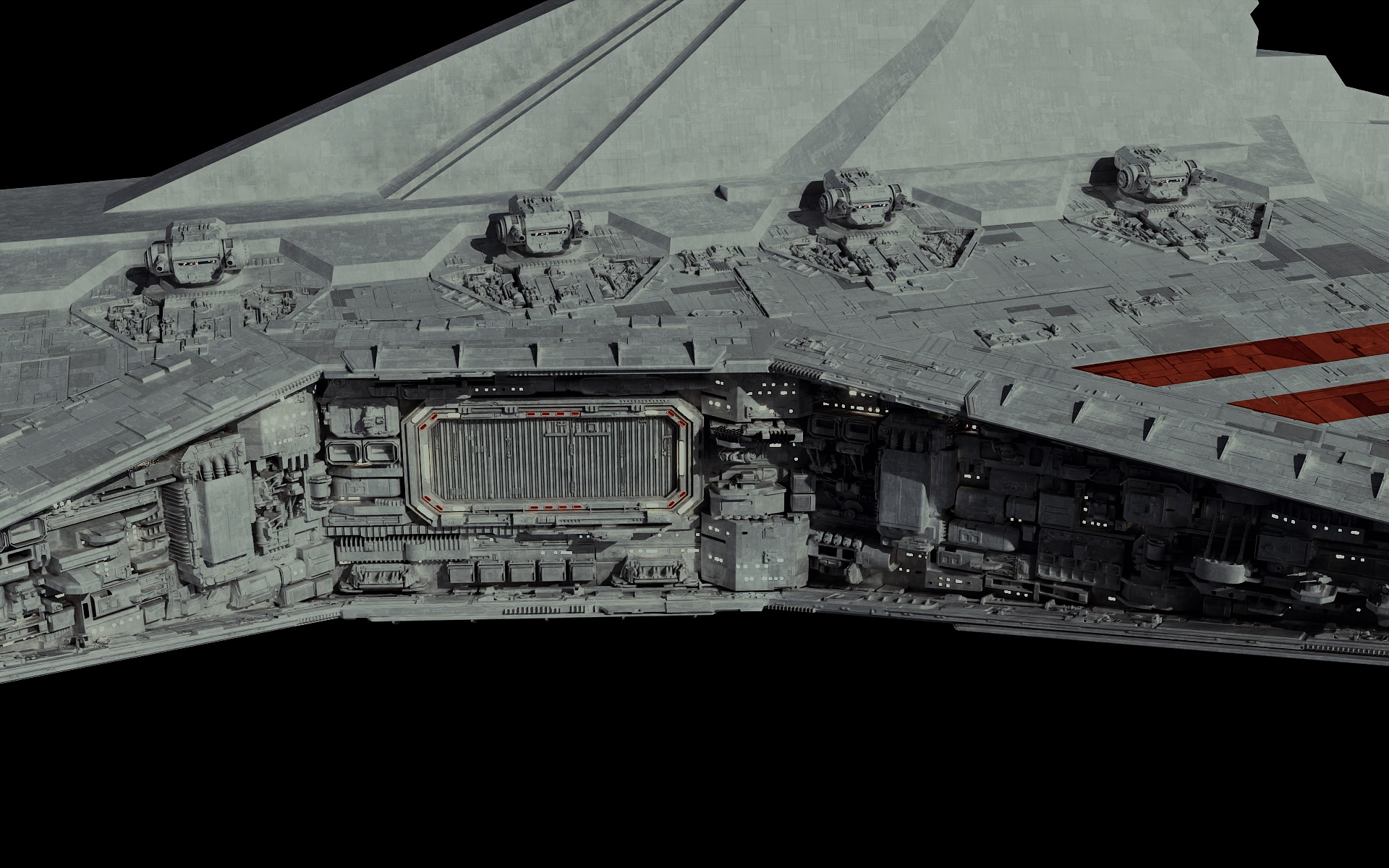 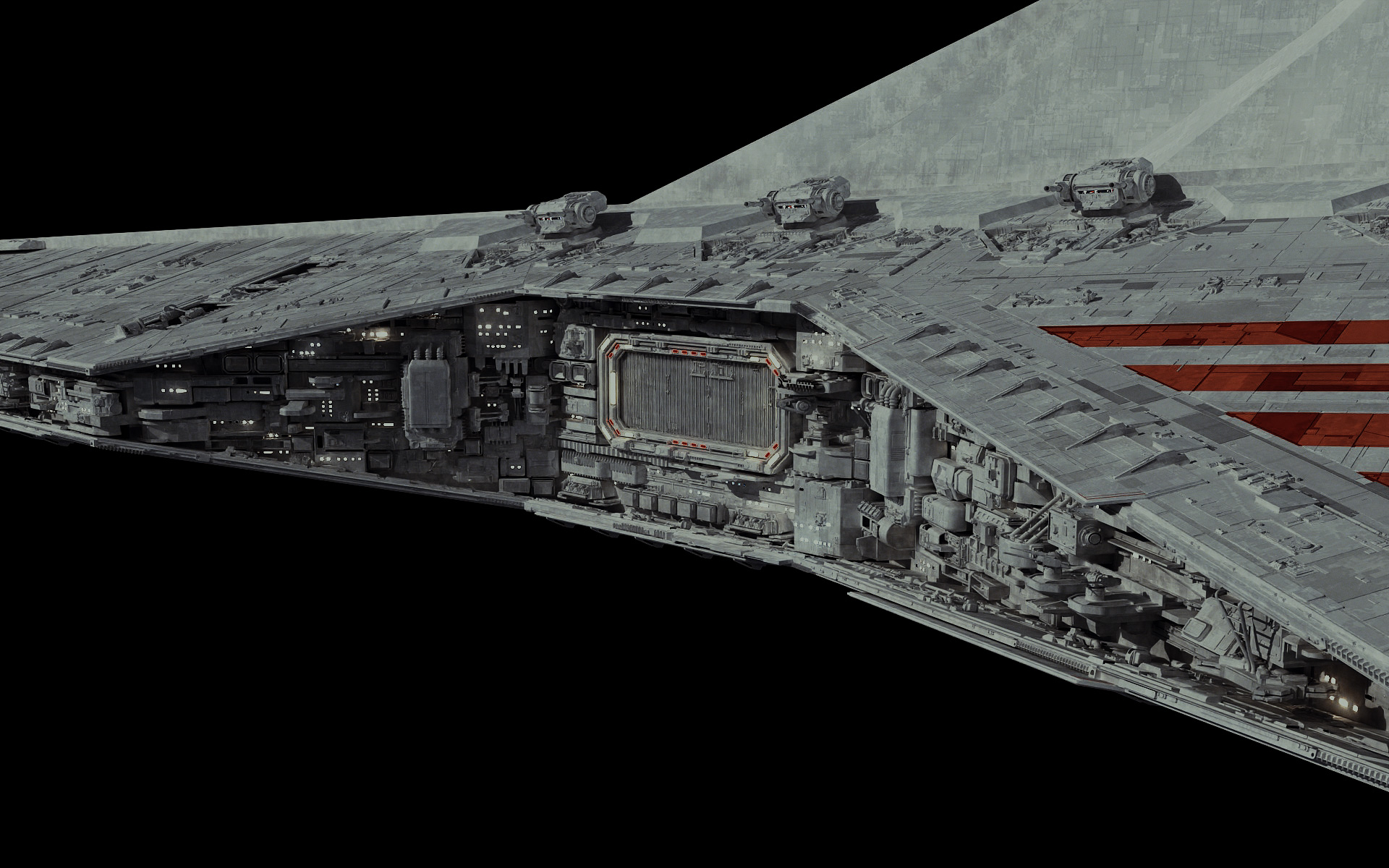 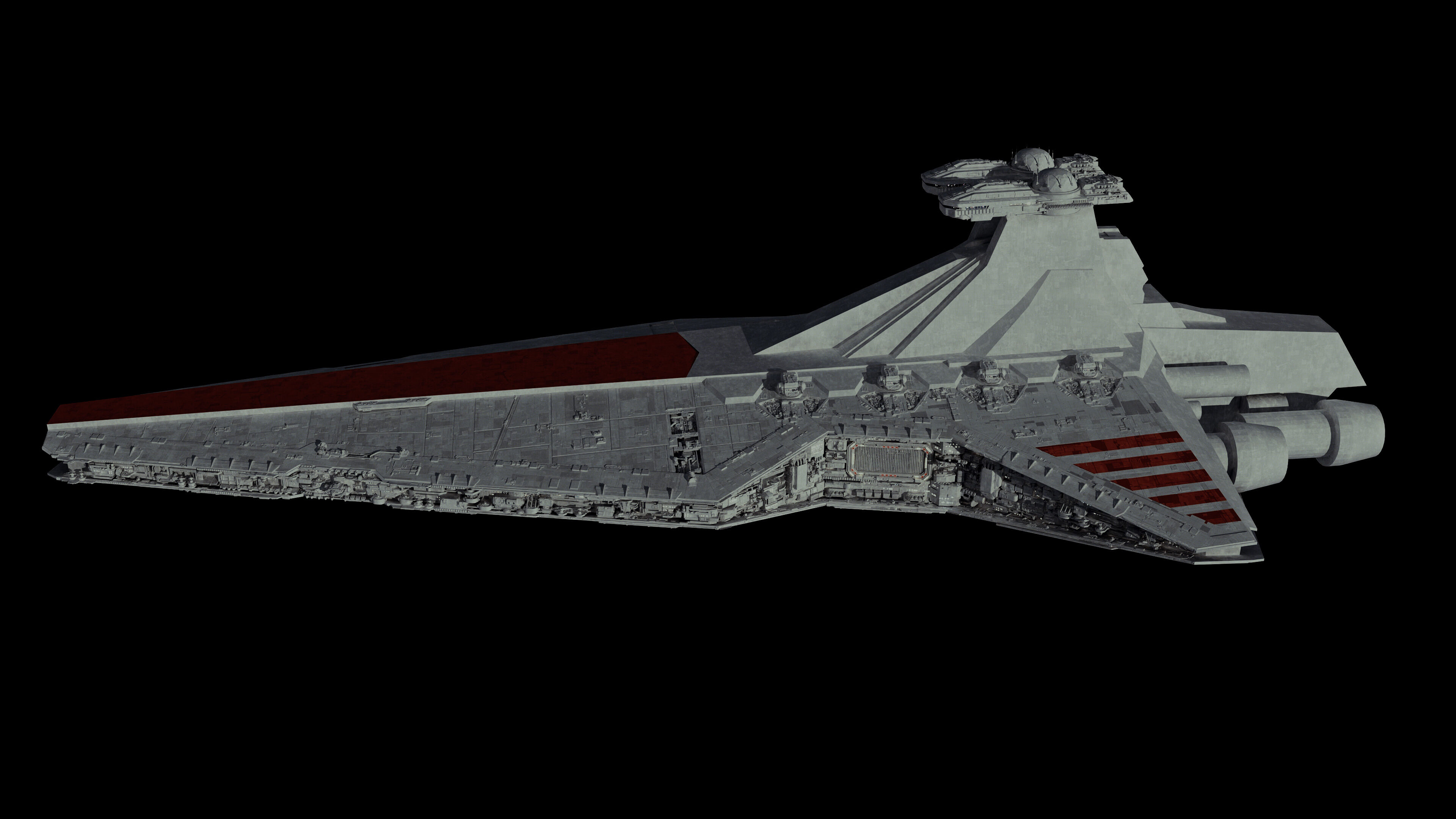 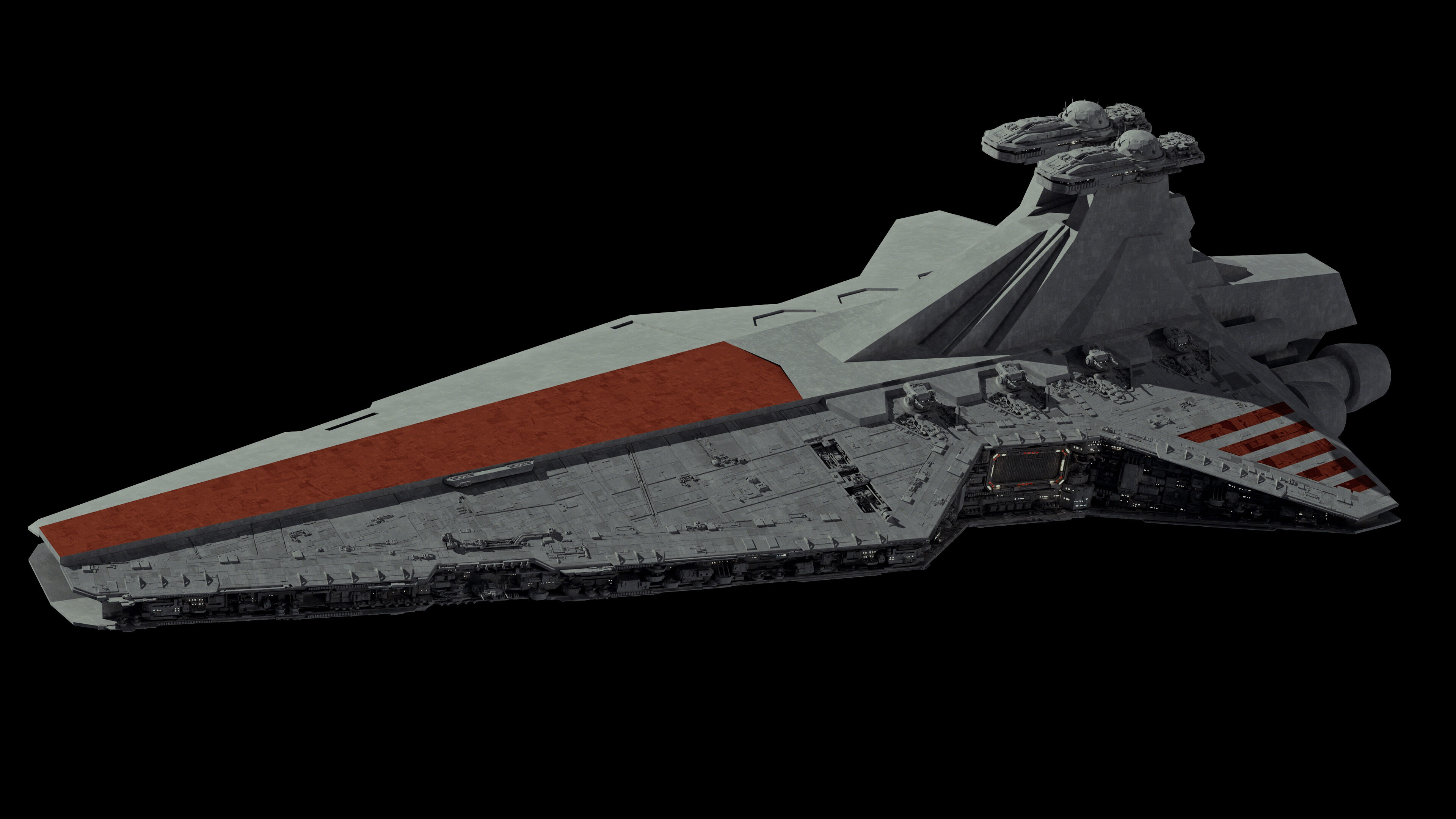 The shield generators make a lot of sense. I’ve never seen those there before. this makes it a clear ancestor of the Imperial-Class Star Destroyer. A much needed improvement.

I love the detail on the side hangar

Hope we get the grey imperial version that shows up at the end of Revenge of the Sith.

2×70-teratons of Venator against 2×175 of Imperator (per turret in both cases). As for the energy feed, my guess is that one can achieve higher rate of fire doing so, but I dont see it being practical if that is true, because the limiting factor would be barrels’ endurance probably.

There is also room for interpretation that firing main battery to its full capacity is very taxing on the Venator’s reactor, though my bet that it’s already the most energy-demanding action a ship can perform, so not much to conclude from there.

It’s stated in Legends that the DBY-827s rivaled the main batteries on the Imperator 1s. So in terms of destructive capabilities they were pretty much even.

But unlike the Imperator’s main guns the Venator’s DBY-827s could not only accurately track starfighters but could also engage them effectively with their flak firing mode.

Then there’s the fact that the Venator could direct almost it’s entire reactor output to it’s main guns increasing their firerate/recharge rate and destructive power. It should be noted that is something the Imperator can’t do.

On a small note, besides what Eugene said about the higher “basic” output (basic being so bc of that it probably can be more, but more demanding on all the parts that are being used to fire a shot) is correct.
Further, every ship can put more energy in whatever system they like, this of course being limited to the endurance and the limitations that part has. Any ship can put more energy into the engines, the batteries and so on.

This is also able in current era technology, for example on ships, don’t quote me on this bc it’s vague in my head, but ships can put of the energy from certain systems, like lights, to give more power to the engines for example, this having to be engines which use electricity in a way to improve them, just to be clear.

I agree with all of the above but as I said Im on the fence about practicality of this, unless the ship is unable to power all of its system at once. For example, design bets all in on the maximum damage dirung opening salvos while keeping things small so has a battery in exess of what the reactor can pull off but copes with it using capacitors. I assume in this particular case juggling how much is used between recharging and beening evasive on the flank speed would come to use.

As for ships akin to Imperator for which we know the opposite to be true, I’d expect them to be designed with highest possible output, just short of throwing its maintenance department in a misery ocean. (Also, from storytelling standpoint on the most basic level I vehemently oppose the notion of ships to be able to “super saiyan”, but thats just me)

Well I base that on the fact that it’s specifically stated that the Venator can do that while it never mentions that the Imperator can do it.

Going by what you say I’d probably say it’s more likely that they can both do it but maybe the Venator is just able to pump more of it’s reactor energy into the main guns. Then the imperator could.

Since the Venator was designed to be a carrier primarily but was well armed enough to hold it’s own against other ships. So it would have more of a need to get more out of it’s guns in a o crap moment.

While the Imperator was designed first and foremost as a combat ship. And given how many weapons it has it probably didn’t need to put as much energy into it’s main guns in a o crap moment then the Venator would with just it’s main 8 guns as opposed to the Imperator’s with it’s massive weapons complement.

I was thinking today how great these ships would have been for the alliance. Excellent raiders. Less armed and armored than an Imperial class but likely faster and could hold out long enough to do damage. Likely would have crewing issues though…

The venator is indeed a very good carrier, but the rebels use fighter with hyperdrives that do not require a carrier. In addition, the use of the venator could not be done on the hit and run operation which are the most common.

Hyperdrive-capable fighters do not exclude the need to maintain them and your FOB being mobile is a step in a right direction, imo, being able to operate faster without the need to set up planetary installations, and allowing better coordination of forces strategicaly (iirc, most of Rebellion’s heavy ships capable of being a carrier did exactly that after the notion of being unable to fight directly was hammered into Alliance).

As for the Venator itself, I agree that it is less than perfect for the rebels. For them any capital hull is something not to be put in a harm’s way, which leaves us with the main battery collecting dust. Also, I suspect ships designed for the Republic/Empire could get quite maintenance heavy because Navy proper can get enough people up for the task, where Alliance can not. Their ships are ought to be quite taxing on supplies due to lack of standartisation, so they have it bad as it is.

Although Venators might suddenly gain in value to the New Republic since it could probably curb its downsides and maximise its design benefits.

It is true that a venator would make a formidable mobile base for a command center and the storage and supply of fighters. However, their last base ship (in rebels) was a pelta class frigate with nearly 1000 crew. Far away from over 7,000 crew member of a venator. They just don’t need a vessel of this tone. It would also make a prime target that would cause great damage if lost.

In one of the books they actually had a lucrehulk to that they used as a mobile carrier.

I bet the Empire was aware of this potential use, which is why they were immediately scrapped following the end of the Clone Wars instead of being mothballed or sold as surplus.