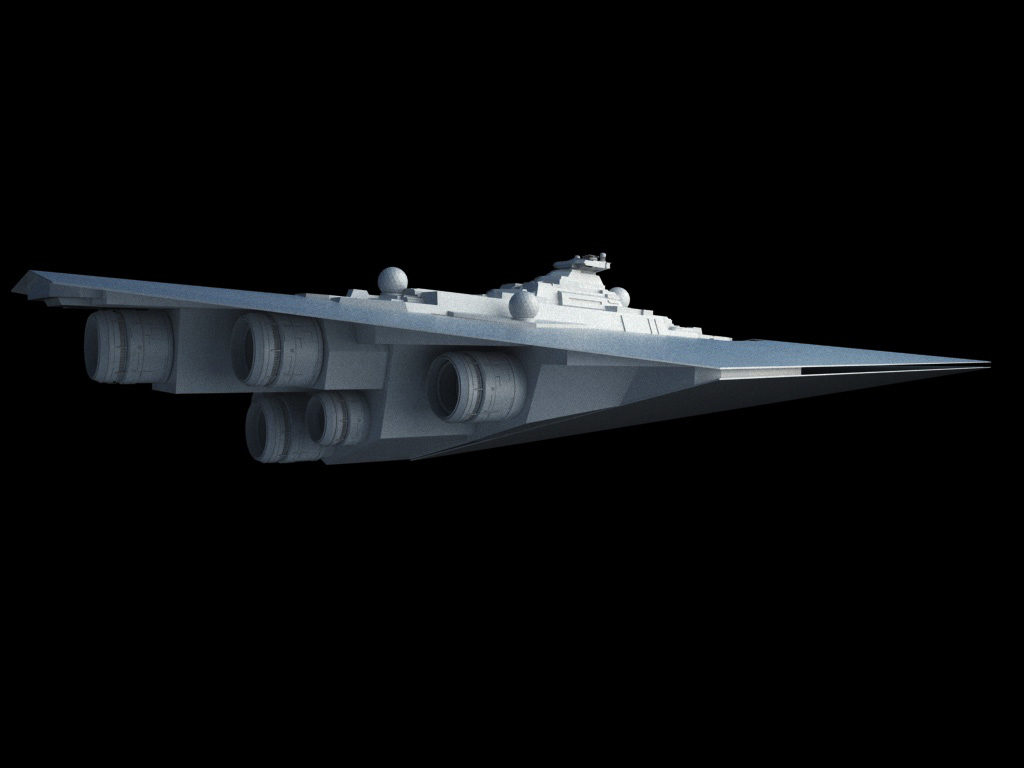 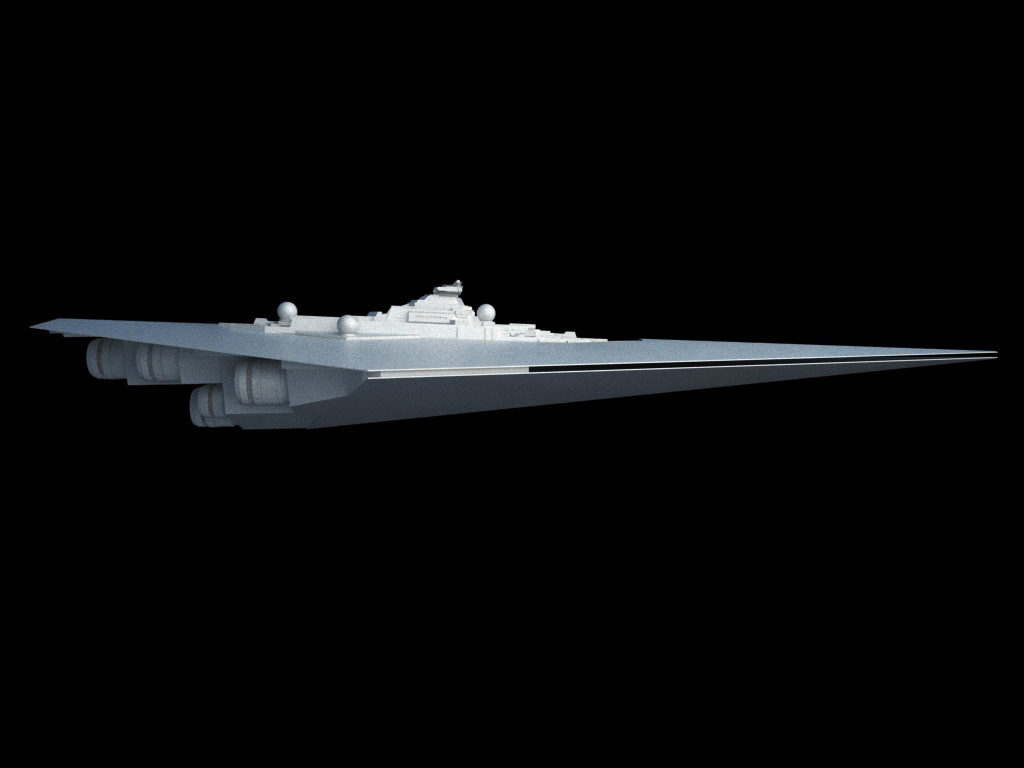 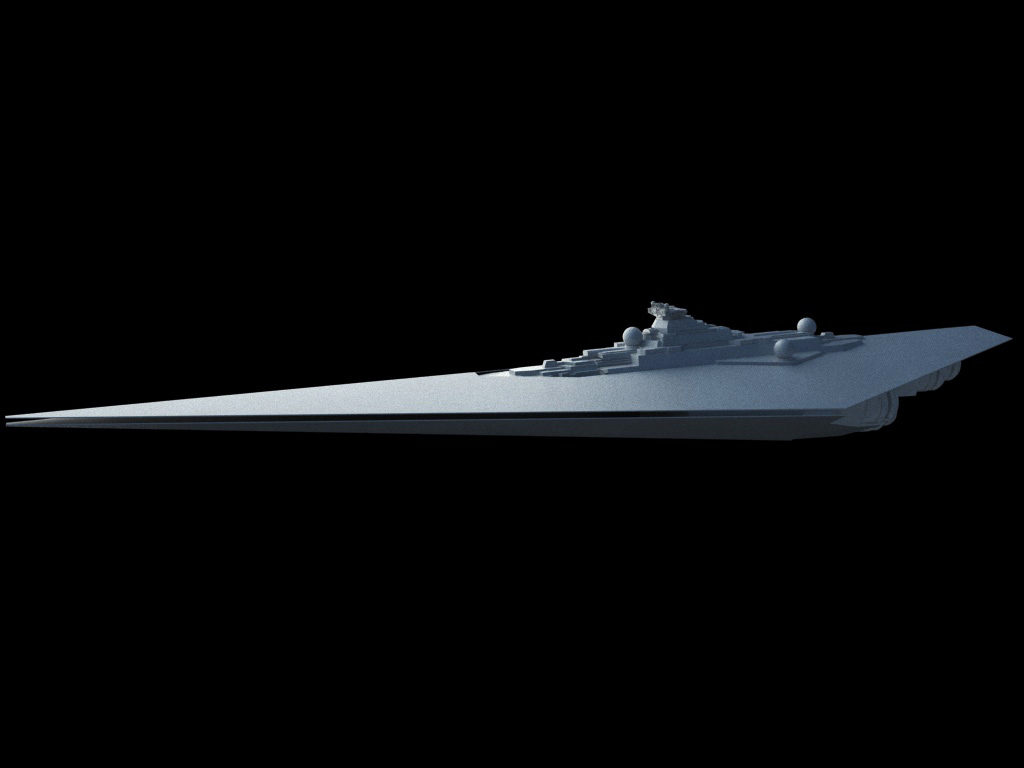 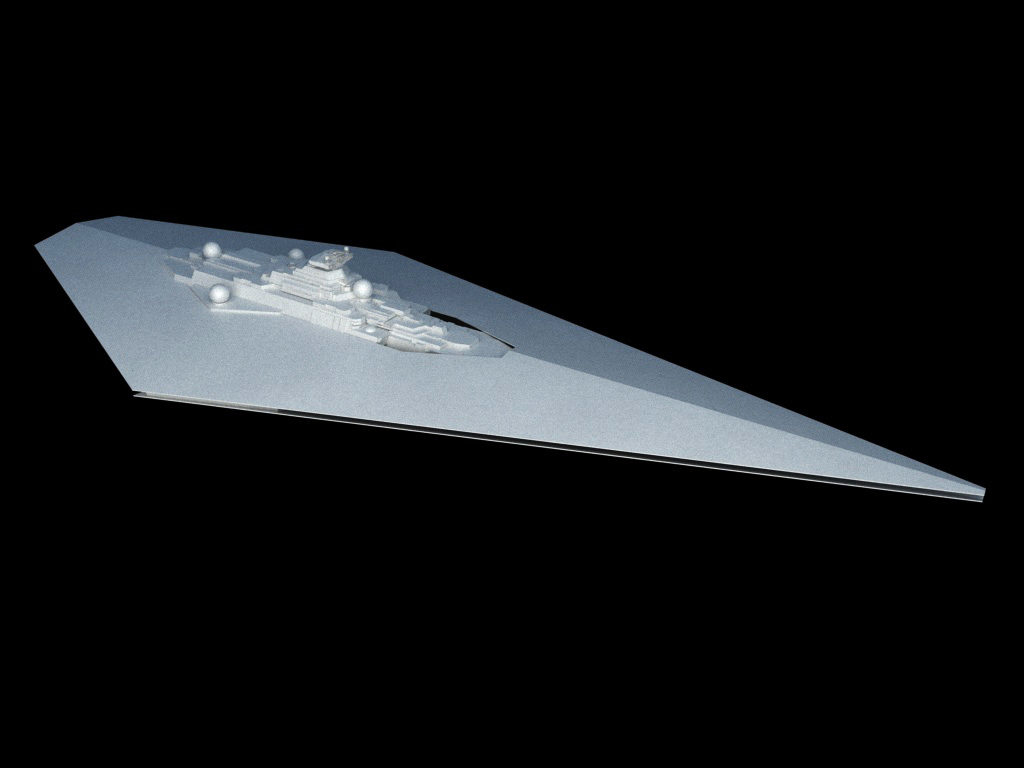 Your work is nothing short of brilliant. You wouldn’t happen to be related to the blissex family would you? Might I be so bold as to suggest a possible class name for this… fine ship? Invictor. Food for thought, and again, absolutely gorgeous work.

Having utterly failed to brainstorm a -tor name for this puppy: niiiice. Pointless tangent: sorely tempted to head-retcon this ship into the pre-Disneyboot novels every time they mention a “super star destroyer” without any further distinguishing details.

Star Battleship aint an SSD, but I know what you mean.

Also, Pugnator-class would be interesting.

Somehow I doubt Rebel/pirate crews nitpicked much ‘tween Executors & this class in the scramble to hit lightspeed before said behemoth unloaded green hell. “SSD!” “No, no, that’s a sector fleet Lega-” “SHUTTHEFRAKUP AND GOGOGO!!” XD

“Super Star Destroyer” is an umbrella term for all ships above the size of a Star Destroyer– Star Battlecruisers, Star Dreadnoughts and the nebulously-legitimate “Star Battleship” all fall into this category, while it’s not an official term in use by the Anaxes War College system.

Very nice and curious if you’re going to call it a Mandator. I know the source website doesn’t go that far to name it but it sure looks like a precursor to the Executor. Mandator made it into the new canon too so would be cool if you get approached for the next essential guide to supply some pictures. Always wanted an official image of the Mandator and I hope it is one of yours since I like your style.

Based on some of his earlier musings over on bbs.stardestroyer.net (check out the ‘Something big’ thread in their Art Gallery), I’m under the impression Fractal’s spin on the Mandator would be 4-6 km. longer & notably beefier than this battlewagon. This design honestly seems skewed toward fleet-coordination functions, though its dorsal globes hardly compromise potential fire arcs.

I’ve followed that thread for a few years but tried 3 times unsuccessfully to register so I haven’t left any comments. I think 8km is the settled length for the Mandator and the Bellator was supposed to be a shorter thinner version of it. I do agree with you on bulk though and the Mandator was supposed to be a hunchback design per the endnotes discussion on the essential guide to warfare so I’m envisioning a bulkier Bellator for the Mandator. This could be a Mandator 1 though and the Mandator 2 would look more like the Bellator perhaps?

It doesn’t fit the mental image I’ve had in my mind for the Mandator but it sure fits the description. 8Km early Empire/Late Republic time frame. Also it’s easy to see if you lengthened the hull and added the extra city structure how this would evolve into the Executor which would fit the new canon that pretty much deleted all the other Imperial dreadnoughts except the Executor and the Mandator designs (at least for now and that I’m aware of).

I wouldn’t call this Mandator. Mandator in my mind would be a mix of Bellator, Assertor, and Executor elements. There’d be a hunchback profile, but the central engine cowling on the Bellator would become a fantail like Assertor/Executor. The proportions in plan view would be more like Assertor, just scaled down and probably proportionately wider. The central spine on my designs would fair into a larger cityscape for the Mandator I/II.

The 12km Mandator III would be very much like a mini-Assertor – more armor, less cityscape.

Your description of the Mandators is pretty much how I’ve pictured them in my mind the last few years. Thanks for the reply. Waiting for the day you get around to doing a Mandator since the most popular design going around now for it I’m not the most fond of. Evil Jedi’s model definitely matches the source he used It just doesn’t fit well for an Executor precursor design.

There is a new canon ship that’s pretty much an open slate on design called the Qaz-class Star Destroyer. The Star Destroyer rating hints at a smaller scale ship but it apparently had the same fire power output as a prototype super weapon test fired for the Death Star project so it sounds more like dreadnought scale to me.

@Striker
Given that Ep 7’s Resurgent class are also dubbed ‘SDs’ despite hitting 2.9 km & packing enough basically-open bow space to qualify as cruiser/carriers, the marketing label seems unlikely to say much about a ship’s role(s) in practice. Agreed that a non-game-mod Mandator visual would be handy at some point.

@Fractal
Thanks for clarifying; given the number of ships that Disney’s reintroduced thus far (hell, two books even namedrop the Eclipse), I really can’t roll with the fans who insist “Impstars are all the Empire needed/wanted, quit complicating things!” Also, considering its pre-boot status, I’m sorely tempted to disregard the EGtW’s mandates re: Mandator (hurhur) where they conflict with yours.

Digging this early start’s engine cluster, upper bow & fantail-the cortex/superstructure bits seem a touch abbreviated, but such was that reference panel (and that’s still at least 1.5 Impstars’ worth of surface area). As for the megaglobes: long-range sensors/jammers? They certainly strike me as a potential feature for that comm vessel at Endor.

This ship looks like the child of a mandator and executor star dreadnought and I love it.
By the way, may I ask what is the proportion of those battleship in the imperial navy?

Is this based on something?

Yeah, it’s based on this:

It’s from Star Wars Tales #21. Although… wasn’t that technically an Old Republic ship instead of an Imperial ship?

The Empire IS the Old Republic with different branding.

Pretty reminiscent of the executor class. Which is good actually, helps anchor it in the line up from KDY. What’s the dimensions on this thing?

Interesting. With so little shown in the source image, you’ve got a lot of freedom to play around with it. Are you thinking of this as the Mandator? My mind keeps putting a mixed HTL battery on those big fields of hull. Since it dates to the Republic period, maybe 70TT guns for destroyer/light cruiser sized opponents, and something like a 300-350TT super heavy mount for peer targets.