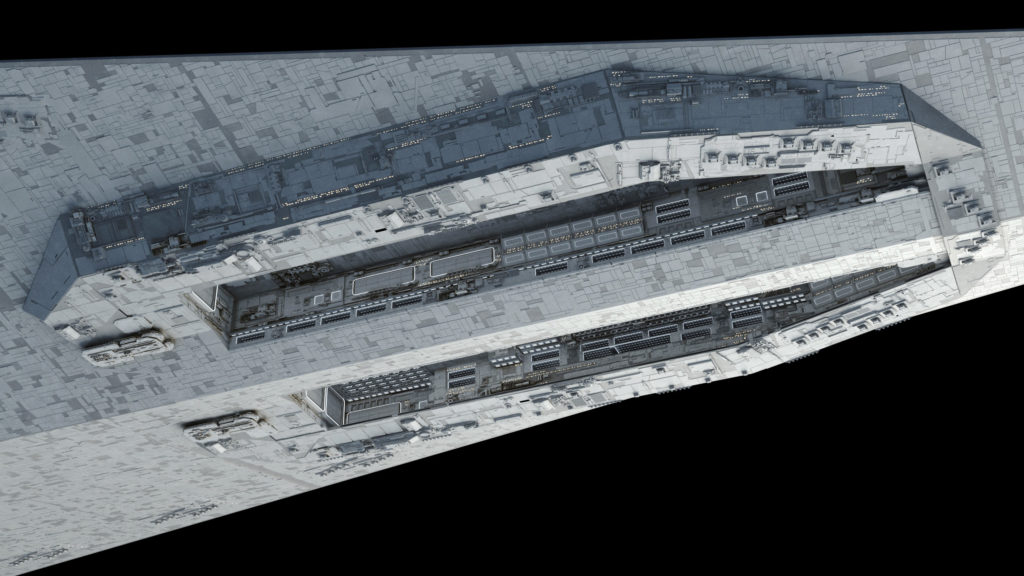 One of my favorites so far….beautiful

Could this be the class that is the Pride of Tarlandia (aka the communications ship at Endor)?

Not with that conning tower. Could be a MkII etc. version I suppose.

I believe he noted it was a “Star Battleship” which showed up in some of the comics at one point in the background? Don’t know if that helps?

How many ties can those contain?

You know how the new Volvo S90 looks perfect in profile? Same applies here. The proportions and massing are perfect.

She’s different. I wasn’t a fan of her superstructure to begin with (no offence meant to Fractalsponge; I think a lot of it’s the design he’s basing this ship off of), but now, seeing her in her entirety, I’m liking her. I like how tall her hull is; how her hull profile when viewed from the front or back isn’t thin like that of an ISD, but is instead that really deep diamond. I think that adds a lot to the ship’s appearance and character.

Also, speaking of hangers, Fractalsponge, have you considered using the Resurgent-class’ double-hull design on any of your capital ships? From an in-universe line of thought, that seems to me to be a much better way to protect a ship’s hanger bays, by having them inside that protection of that double bow, than to simply have them open onto the underside of the ship.

The double hull is meh. Disadvantages are that the hangar is open to the front, which is the alpha arc. Not so much of a problem with carriers, but more of a problem with a multi-role ship. Plus, docking is more problematic – mistakes get splatted against the mothership, whereas a ventral approach gives more pull-away opportunities. Again, not so much of a problem for a carrier, which would position for flight ops, but more problematic on a ship that expects to fight often. The key question is: can you hide the hangars from view and still maintain most of your firepower on a target? Given that most Imperial ships stack their weapons dorsally, the ventral-hangar ships have an advantage in this regard compared to bow-on hangar ships, which, again, are usually in designs not intended for heavy ship-to-ship combat.

How many strikecraft and stormtroopers would this thing hold?

Or, if this is CW era, Clone Troopers?

Fair points. I guess I was picturing the double hull being used on a ship that was meant at least in part to serve as a carrier. Maybe a ship with that design would have to be limited to a dedicated carrier, though, designed to sit in the rear of a formation of capital ships with a couple ISDs in front of it to provide cover. That being said, though, the Venator was considered a cruiser-carrier, and the double hull design seems to me to be more practical than the Venator’s long dorsal hanger. I mean, a ship with a double hull could launch and recover small craft whilst trading close-range fire with enemy capital ships, because the two bows would protect the small craft from fire while they were taking off and landing, whilst also protecting the hangers from most direct fire. If you were the captain of a Venator, though, and you needed to launch or recover craft while in close-quarters combat (say you needed another Y-wing squadron to support you, or you were trying to recover LAATs full of ground troops retreating off a planet), I’d imagine you’d be taking a big risk opening that hanger. Not only are the enemy ships near you going to focus fire on that weakpoint, but friendly craft taking off or landing will be completely exposed until they’re inside the ship.

I guess part of why I was asking, though, was because the double hull seems to me to be an aesthetically interesting design, and I’d be interested to see it explored more. I’m glad to read your thoughts on it.

I think the hangar is likely why Venators get superseded as the standard line destroyer by Victories and Imperators. There’s not a single direction in that design that can be faced to the enemy without a major hangar aperture (except the engines). Imperial doctrine seems to hive off major carrier functions onto more specialized ships and focus relatively more on ship to ship in the most common designs. Though an ISD easily has the space for Venator-sized fighter complements – it’s just taken up by AT-ATs.

The Kuat-Entralla team that designed the Resurgents don’t seem to have changed that doctrine despite continued New Republic/Resistance investment in fighters. The Finalizer only has two wings of starfighters despite having 10+ hangars and 4 times the volume of an Imperator, which gives it much faster launch rates, but proportionally awful fighter complement.
I guess their approach to dealing with small craft is now concussion missile saturation, which can’t be that ineffective if they managed to shoot down two main characters.

@Bannon
Granted, two characters who seemed pretty preoccupied bickering over Poe’s agenda when that missile hit, in a TIE whose starting point was inside the Finalizer’s hangar deck, so perhaps First Order point-defense isn’t as anemic as it seems (if nothing else, lighter guns were firing on Poe’s stolen ride in between missile volleys). Me, I’m just wondering where the hell the Finalizer was when Rey & Finn got tired of playing junkyard dodgeball on Jakku, ’cause you’d have half-expected it to snatch up Han’s bulk freighter and shut down the whole latter half of TFA in one go.

Honestly, the Resurgent’s hollow bow space strikes me as a serious structural compromise when considering peer-opponent combat (like, say, a Home One-scale Mon Cal). Not quite as bad as the Nebulon-B’s ‘connect engines & command portion with an I-beam’ layout, but I imagine one of Lieut. Dameron’s intel breakthroughs could be summed-up thusly: ‘BUST THEIR BEAKS’.