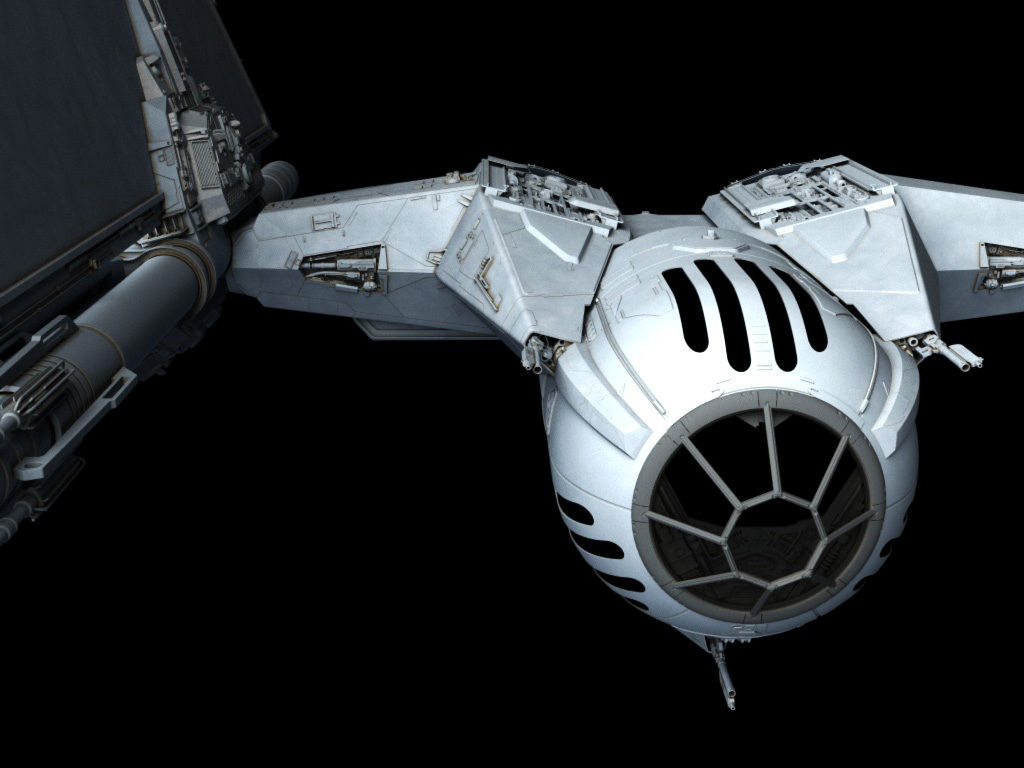 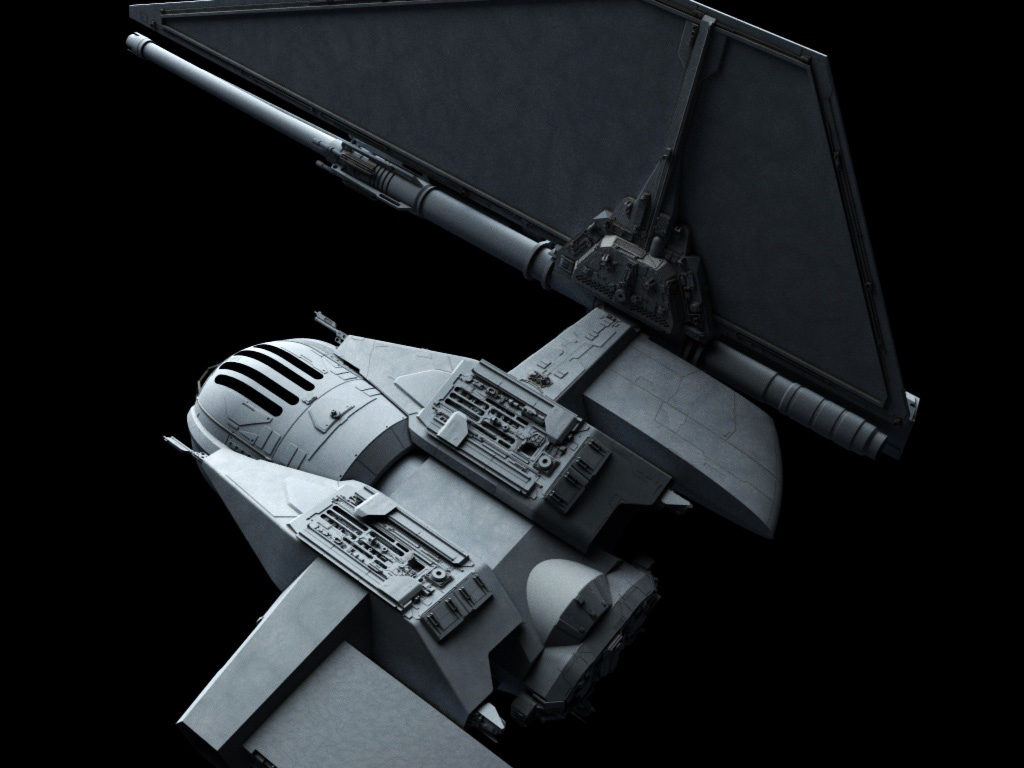 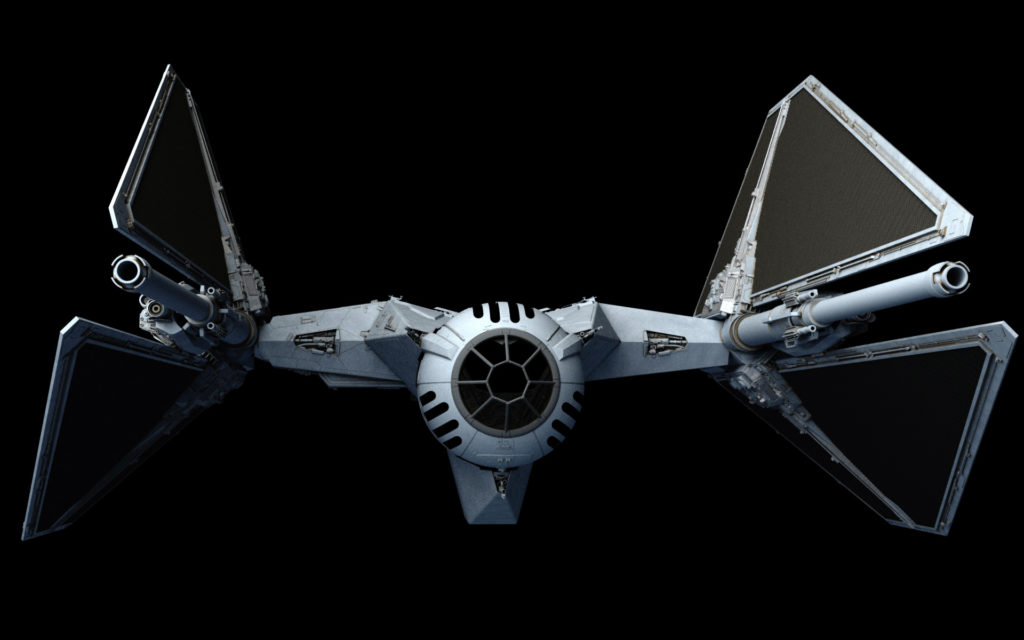 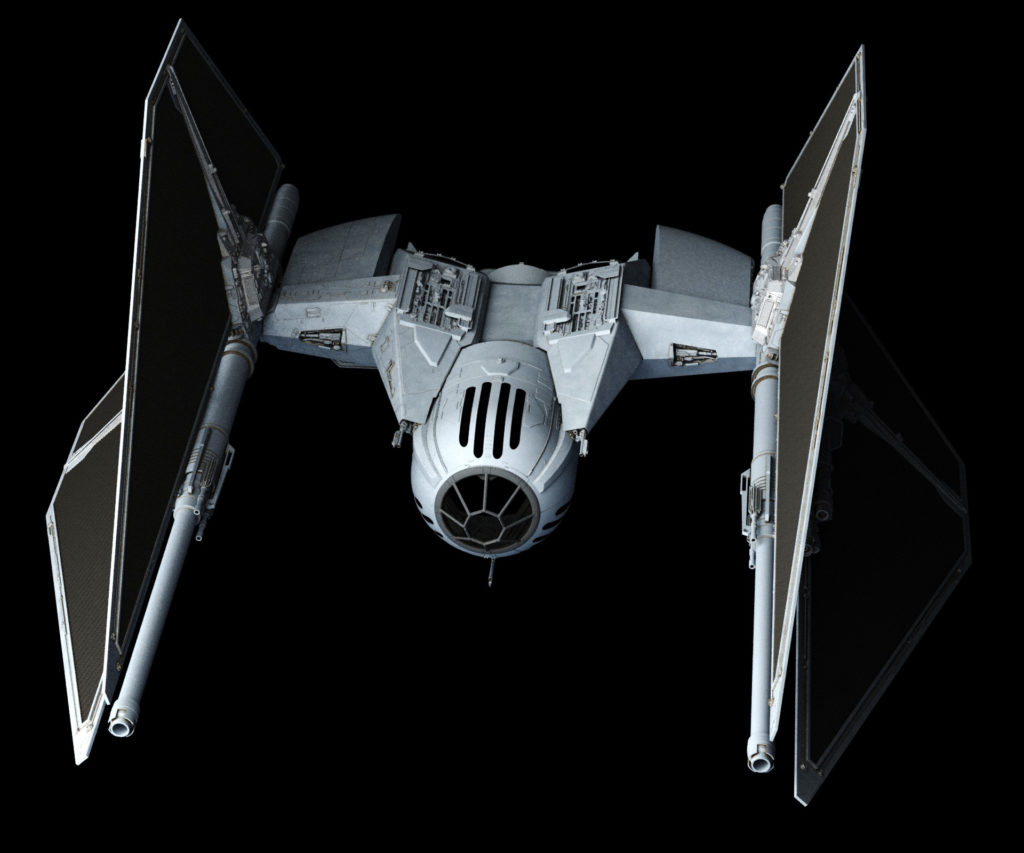 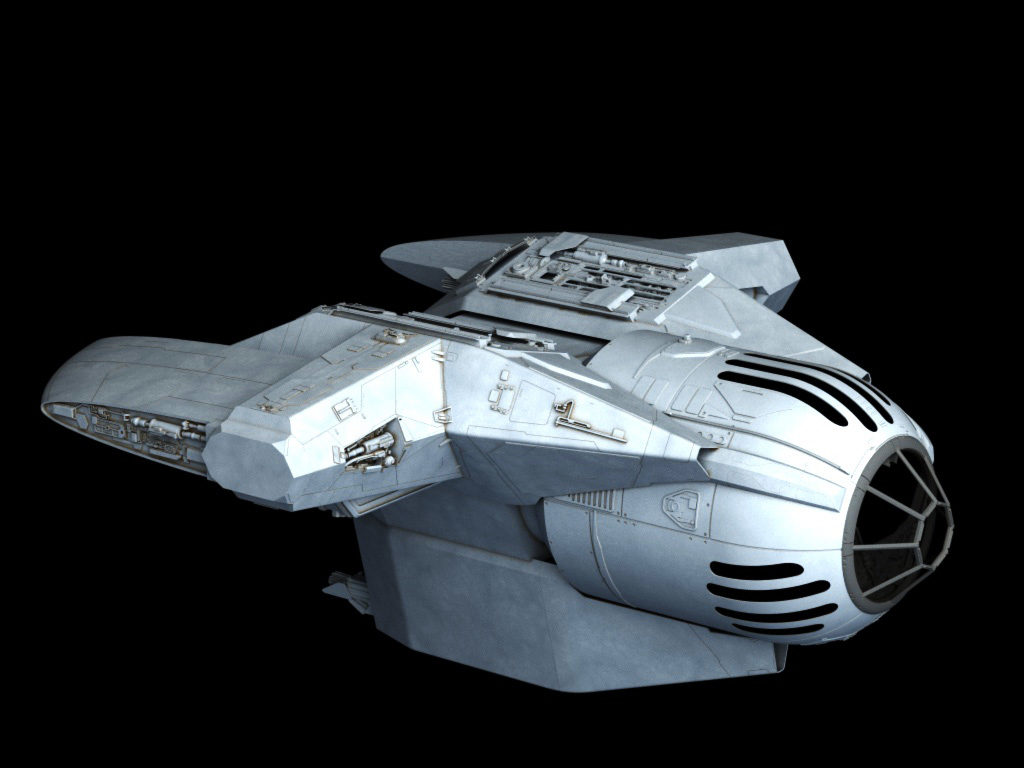 This doesn’t really look like an antifighter craft to me, more like a mix of ARC-170 and an Avenger. LTLs are pretty overkill for taking on alphabet-fighters, and they must consume a ton of power, eating up speed and agility. I’d think that this might be better suited as a strike fighter/antiship craft, using the TLs to strafe smaller ships while also having the punch needed to get through heavy fighters/antifighter corvettes. However, it can’t dogfight like an Interceptor or Line, and since it doesn’t have a tail turret might need some escort.

It isn’t primarily a dogfighter, that’s true. But massively outranging enemy starfighters with weapons that are near one-hit kill is insanely useful. The key is pairing it with enough thrust and manueverability to not be useless vs a dogfighter, which is accomplished by massively increasing the power generation along with the massive increase in weight, thus keeping a good T/W ratio. Basically if something gets in close vs this, it would: 1) shunt recharge power from the LTL to the engines 2) be able to continuously sustain maximum firepower from its laser cannon armament, 3) keep the massive shielding that the large power generation and heat dissipation enables, and 4) retain capacitor power for instant-kill snapshots from the LTL. Or, it’d just run like hell; turning LTL power into thrust means it’s a lot more nimble (in a straight line) than one might think. Sort of like how an something like a Carrack can reel in X-wings despite being so much larger.

Consider – a Defender increases weight from an Interceptor pretty massively, but it also massively increases its power, so much so that it actually outperforms the Interceptor and keeps all the capabilities that the extra power enables apart from thrust. A Mangler wouldn’t manage the same trick vs a Defender, but it would do so to the extent that it would not be an easy kill, and if the Defender gets sloppy it’s going to get suddenly crumpled by LTL. In game terms, think a Defender vs an Avenger. The Defender would win the plurality of the time given the same piloting, with the rest of the time split by stalemate/the Avenger retreating and the Avenger winning; it’d be close enough that pilot quality, luck, and teamwork can all easily swing the result.

Nothing stopping it from hitting ship targets also, of course.

All those Defender/Avenger comparisons remind me: not only has Fantasy Flight Games’ X-wing miniature line apparently passed up the Avenger (too Interceptor-like for focus groups’ taste?), but their Defender stats seem to be markedly nerfed-haven’t played the thing myself, but apparently regulation versions are ‘just’ roughly competitive with alphabet snubs & notably more sluggish than squints. I could halfway see this if we’re assuming the initial prototype batch packed on too many features (guns, shields, hyperdrive & *tractor beams*?? Guess which one I’m cutting) & not enough engine space, but Fractal’s Defender revision fixes that issue nicely. I also wouldn’t mind a Defender/Avenger balance where the former’s a superfast strike fighter (ala F-15E) & the latter a space superiority specialist (ala, well, F-15C), but that’s just my aesthetic sense talking.

And yeah, if nothing else I could see a Mangler-style LTL sniper saving its lighter brethren plenty of work & woe against punchy, rugged gunboats like the Skipray, rogue Starwings, or those ever-pesky light CEC freighters (waves at the Falcon & Ghost). Plus, suddenly your corvettes have a little help crippling GR-75 convoys.

Nice. Would rather have this over the cack they have produced for Kylo Ren’s starfighter. They really need to up their game on the design front in the new trilogy. Hopefully we get something more interesting in TLJ, but that design doesn’t fill me with hope, though those Resistance Bombers look potentially interesting. Loving this though. Sure it uses a lot of ingredients from past TIE craft, but it is all in the blending of them that makes this pretty inspired, and a formidable looking ship.

Kylo Ren’s starfighter actually reminds me of the TIE Avenger and that is not a bad thing. This TIE Mangler though looks even meaner for sure.

Now that I look at it properly it look like a beef up version of the TIE Experimental M2 ‘BigGun’.
Example: http://vignette1.wikia.nocookie.net/starwars/images/a/a0/TIE-M2_XWA.jpg/revision/latest?cb=20060307212353

Looks like it has a Scimitar’s cockpit, so it can be assumed it also doubles as an escape pod?

Hey Fractal what do you think of Kylo Ren’s personal TIE fighter called the TIE silencer?

I think my Avenger is way better.

I’m guessing you either don’t like the way the cockpit looks or is it that it to similar to the TIE interceptor or is it both?

I think it’s uninspired. The cockpit is mashed and too blocky for a TIE, and the entire thing looks sort of like an Interceptor that’s been non-uniform scaled lengthwise. It could have and should have been better. I don’t really get it. They nailed the SW look for Rogue One and have been lackluster generally (for the ships) in the new trilogy. The new XW and TIE don’t count because they are essentially small mods on the original. The stormtrooper dropship was good, I’ll give them that.

Well, at least Ep 8’s deigned to introduce another pointy-winged TIE, ’cause the /sf’s rotator cuffs were doing less than nuthin’ for me. Ditto re: the T-70’s jigsaw wings-mate its fairly slick fuselage with OT-style ‘ailerons’ and you’d have something. As for the stormie bus, stick that sensor/comm brick someplace which doesn’t spoil the top turret’s arc. Ah, and here’s hoping they crank out some capitals with better aesthetics and/or functionality than the Resurgent.

The stormtrooper transport’s dorsal block is actually the pilot’s cockpit if the cross-sections book is to be trusted.
With the great job they did on Rogue One’s TIE Striker, they really pumped my hopes up for TLJ’s designs, but you can’t have everything.

@Steve
Correction appreciated-though if anything that’s *more* incentive to place one of those features somewhere out of the other’s way. Incidentally, you don’t suppose any of those Scarif surface-garrison pilots escaped the base blast…or would Tarkin just order ’em hunted down & purged alongside the shield-gate & destroyer-based squadrons?

If the TIE/SK has even remotely close to TIE/ln acceleration (4100g), any survivors of the dogfight had a good chance of making it to orbit given how long it took for the blast to engulf the base. Out of all the personnel based at Scarif, the Striker pilots seemed to be the only Imperials who traded with the rebels at even close to a 1:1 ratio, wiping out Blue Squadron to a man.
In the comics, Strikers appear at Rothana several years later, but your guess is as good as mine about the pilots assigned to Scarif.
Any surviving destroyer crews at Scarif deserved to be dishonorably discharged given their atrocious ship-handling and gunnery, but at least the Devastator showed everyone that a well-handled Imperator is still a terror ship-to ship.

Agreed re: the likelihood of Striker squad competency & the Scarif-stationed capital crews’ lack thereof; I suppose Tarkin *might* have bigger fish to fry than a fistful of pilots, but if he didn’t overlook ’em…well, this is the bastard who made an Effective Demonstration outta Alderaan, and Vader’s too busy running down Tantive IV to dispute him.

I seem to recall Blue Squad getting split up (and suffering two losses) c/o the shield gate’s retraction, with the spaceborne portion (4-5 snubs?) managing to dent one Impstar’s starboard sensor/superstructure-shield dome (though I still doubt that *or* the subsequent ion-torp strike would’ve slipped through without Profundity’s HTL volleys). Still can’t tell whether enough Blues escaped Tarkin & Vader’s arrival to reconstitute that unit another day.

Speaking of Profundity: that Hammerhead-assisted collision might make a little more sense if said flagship was doing its damndest to tractor-lock the undamaged destroyer in place. Dunno whether that would snare an Impstar at Falcon-pursuing velocity, but glomming onto one at a station-keeping crawl seems at least possible with a ship of comparable tonnage. Starting to ponder whether tractor-beam abuse enabled all that Rebel ‘facehugging’ at Endor as well.

Looks good! Great original fighter design. So would the cockpit be on par with a Scimitar, or bigger? Do you envision hyperdrive capabilities? Are those three point-defense laser cannon, or just targeting systems for the big guns?

From the previous WIP, with the wing next to the TIE Interceptor, I think it is the same size as a Scimitar’s cockpit. And from the size of the hull, it most likely does house a hyperdrive. The 3-point items though, I have no idea if they are weapons or sensors.

Pretty sure Fractal flat-out reused the cockpit cylinder from his Scimitar render, and it fits rather nicely in my book. The smaller wing ‘guns’ are apparently Interceptor-style sensors, with three modular laser/ion+autoblaster ports (2 on top, 1 ventral) framing the cockpit.

Sounds good. This thing would ravage in formation with some Interceptors or other high-end models. Brilliant work.

It’s the Scimitar cockpit, shortened at the rear end and with a Defender-style protruding glazing frame.