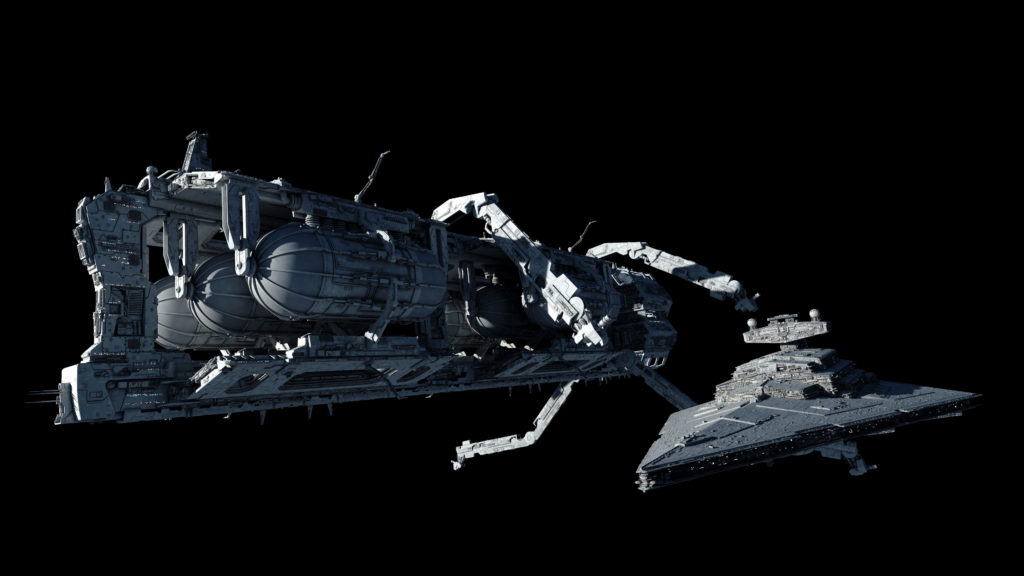 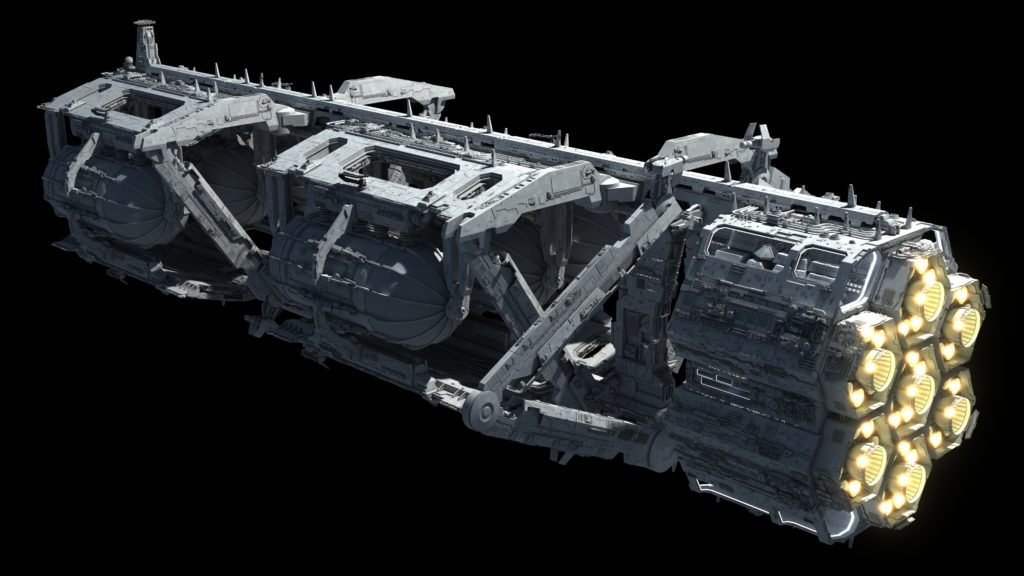 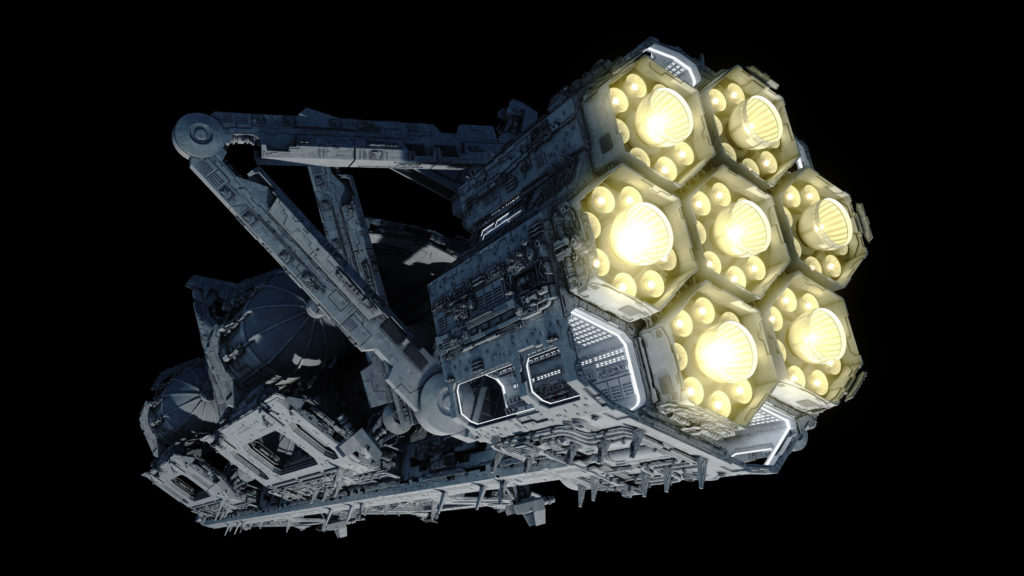 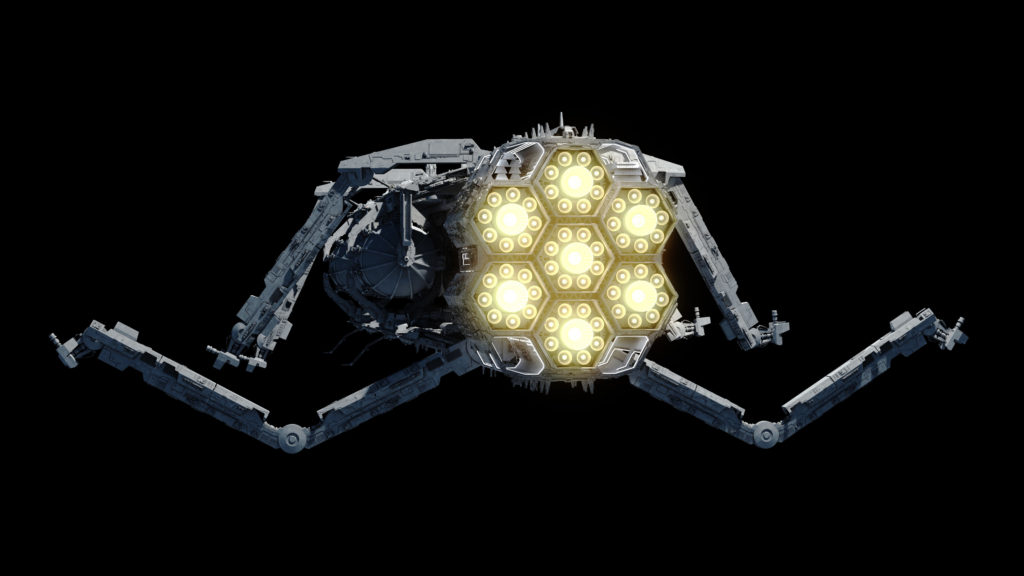 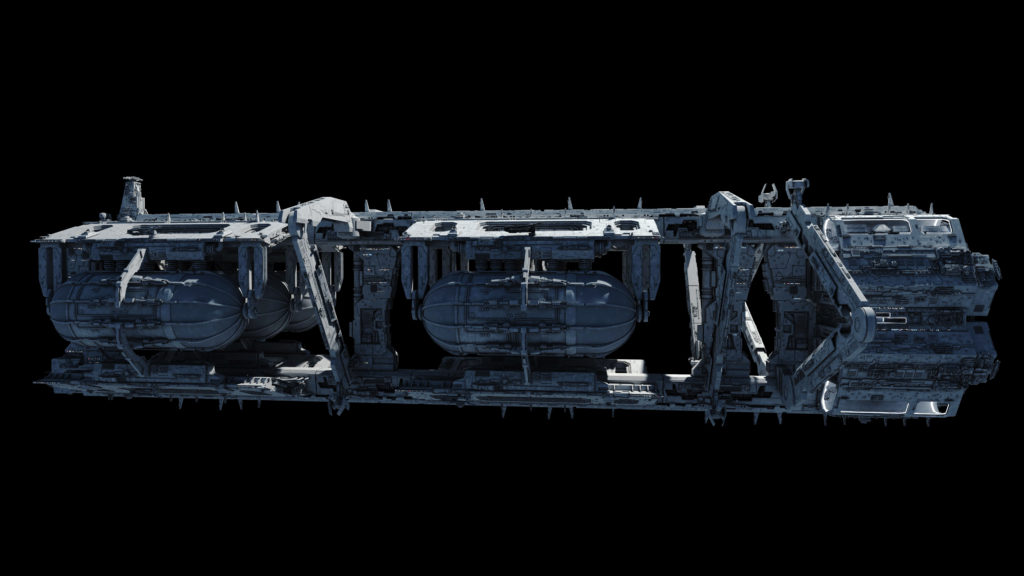 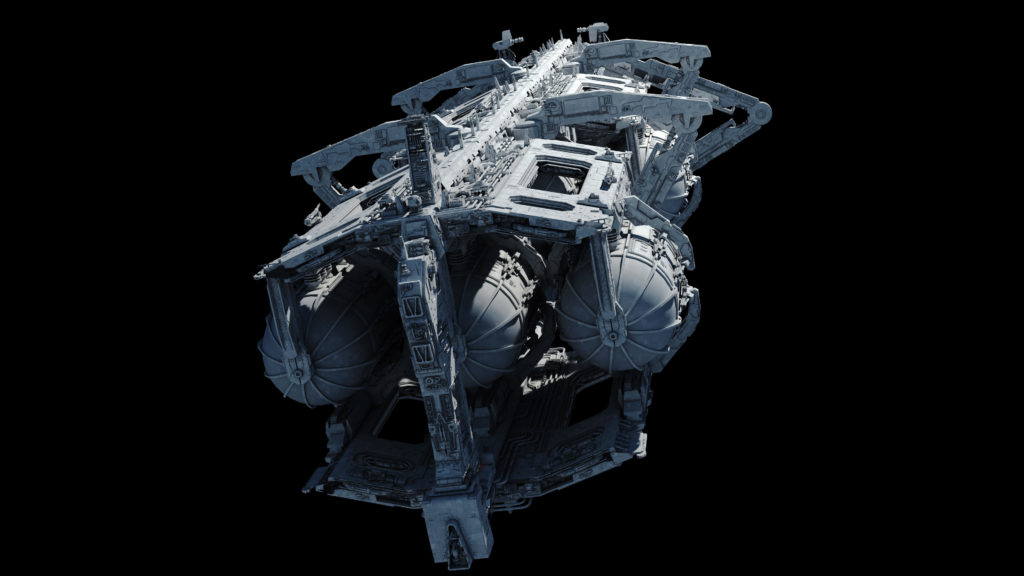 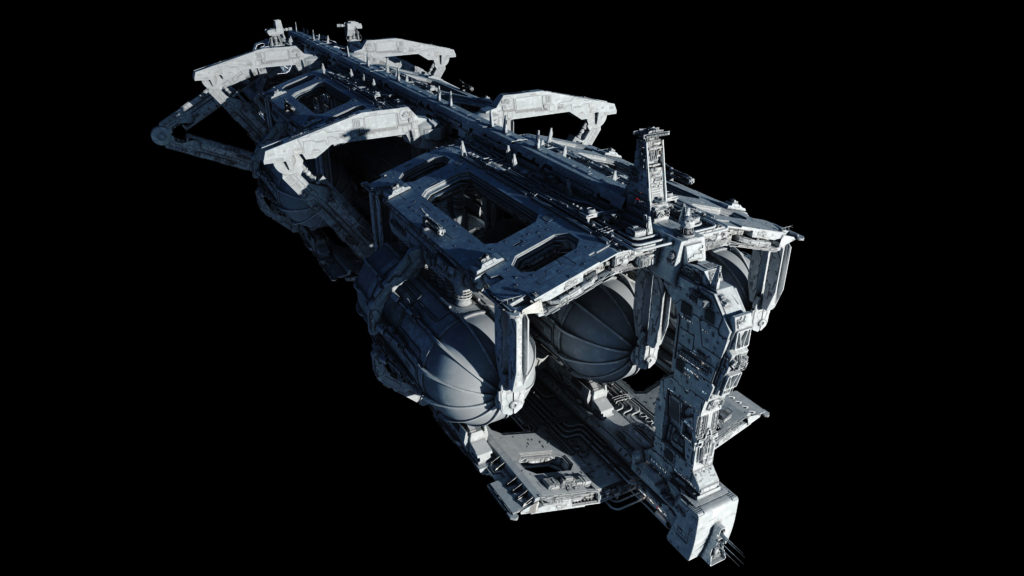 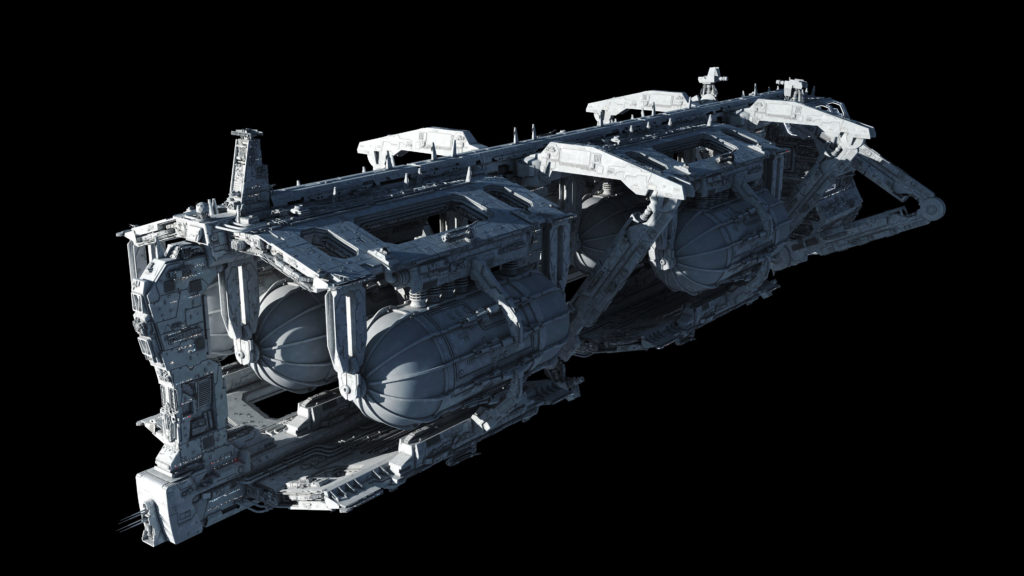 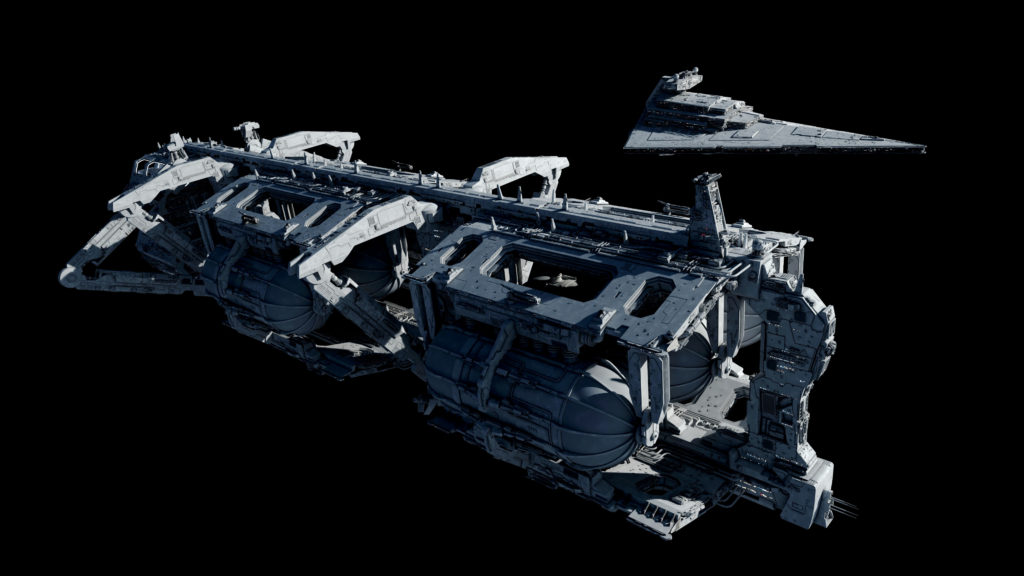 Been meaning to bring this up…

In Hull 721 Part 2, there’s mention of a large fleet support ship that immediately made me think of the Altor. In particular, though, that ship is described as being capable of fitting different types of mission modules – particularly repair – in place of fuel tanks, so a single platform could mix and match depending on the specific mission requirements. Are you picturing something similar here?

I would love you to add some descriptions to the fantastic models, always sad to see missing details.

What is height of this?

A single tank is around 58 million cubic meters, 350 million with the six. I have no idea about the weight of superdense fuel, but it could probably reach the dozen billion ton.

So its a tanker for refueling the big ships then?

yes, it can probably fuel an entire fleet

I wonder how many of those were in service in the navy, considering the ability of a singular pre-clone wars corporation to field thousands of multi-billion ton cargos.

50k+ strikes me as a fair-ish starting figure.

Yeah, the Altor is longer, but it’s frame is way more skeletal than the one of an LH-3210. Just made a rough estimate and it should be around 710 million m2 without the tanks, or a little less than half of a lucrehulk volume.

Still 8 destroyers worth of materials though.

True, that’s plenty of ship even partly hollowed, though if we roll with that ‘roughly 25,000’ figure for the Imperator class, then throw in proportionate counts for other destroyers, corvettes, frigates, cruisers, battlewagons…you get the idea.

I never really believed the 25.000 count to be a realistic representation. I vaguely remember it originating from a republican historian, who estimated a sector group to be of two or three dozen destroyers. But even if we take the largest figure, it really isn’t enough to monitor the average 50.000+ hinabited worlds of a single sector, a good portion of them ranging above the billion individual, even with the aid of a support fleet. Plus, it didn’t tell us much about the fleet as whole.

I think the 25,000 figure originally came from Zahn, a notorious minimalist (Goddamn Katana Fleet go home) but nonetheless a well respected EU source and far better character writer.
The dumb thing is that the 25,000 number got rebooted into Nu-Canon by Star Wars Uprising, a discontinued low-effort mobile game tie-in with TFA. Personally I think that’s just as bunk as the 2 million clone troopers figure, and might just represent the initial Kuat production run of Imperator-I, and the true number of destroyers should be running into the high hundreds of thousands.

@Valoren
Ah, so you figure I’m lowballing it hilariously. Based on the sector stats you quote I have to agree, even if scalds of those worlds may lack the funds/networking for planetary shields (much less defenses/fleets of note).

@Steve
Yep, now I distinctly recall that 25,000 quote being pulled from Pellaeon’s mental musings in Spectre of the Past, first of a two-parter Zahn series which addressed NR/Imp peace talks (and a Thrawn imposter out to torpedo same). Frankly, I might’ve spent too much time lurking SDN of late-lotta nu-minimalism framed as ‘sensible Rebels/Clone Wars extrapolation’ creeping into that board.

Yeah, Rebels/Clone Wars might even be more minimalist than Zahn. The existence of Starkiller Base, the Supremacy (ugh) and a sizable conventional FO fleet in the new movies should prove that even marginalized fringe powers like the First Order still have access to truly absurd industrial bases, but that message might take a while to seep in.
Hopefully the new Rebels season ups the ante and shows off Imperial hardware in scale, but I wouldn’t count on it.

Yeah, those kinds of shows always have a severe tendency to minimize the scale of pretty much everything. In the clone wars, the largest fleets to attack major objectives like Kamino or Geonosis were usually in the dozen ships at best, including frigates, transport and support ship. Even lucrehulk were almost alway absent from major engagements. Ironically, the 2003 animated series, for all of its “particular” artistic choices, was way better at showing the scale of a galactic conflict than the CGI shows ever were (and, even if it kill me inside to say it, probably ever will be).
The two death stars, which are worth the volume of tens of millions of destroyers, should be sufficient to make the idea of a 100.000+ imperial fleet more than credible. Just like the multi-thousand g accelerations or the massive firepowers, i fail to see why so many people, even among fans and writers, have a hard time admitting that. It’s on screen, and not hard to find if you know were to look.

25,000 Imperial Star Destroyers I think comes from taking the number of sectors (approximately 1,000) multiplied by the supposed size of a normal Sector Group (24 Star Destroyers), with another thousand added on top for roving commands.

While that seems small for a Galaxy spanning empire, if you go to those same sources you discover that the 24 Star Destroyers per sector is a minimum for the group (without attachments), and the same OOB has a minimum of 2,400 other ships in the sector… 25,000 translates to an absolute minimum of 25,000 Imperial Star Destroyers plus 2,500,000 support ships.

I decided to try and find an absolute minimum and absolute maximum size for the Imperial Navy using the old WEG d6 Imperial Sourcebook as a starting point.

It works for me, but I’m sure some people may see it as rather small still.

Your numbers don’t seem particularly *in*compatible with applying the Zahn figure to an initial Imp-I run, though I’d be sorely tempted to round the max up to ~50 million. Either dreadnought count strikes me as especially reasonable.

Keep in mind that in the Aftermath series, it is also stated that there were only 25,000 Star Destroyers. The again, it also stated in the same paragraph that there were only eight Super Star Destroyers in the Fleet. It could be that they were only talking about a single Fleet, like say the Seventh Fleet for an example. But, I am not a Historian, however I CAN visually identify nearly ALL of the Imperial Fleet ships. I have a small background knowledge of Imperial Warships. Any pointers?

@Steve
Remember, this is Star Wars. They have entire Solar Systems at their disposal. That is more than 10 times the amount of resources that Earth has. Earth can make one Star Destroyer. StarKiller Base was built on Illum (in theory), which was a sacred spot for the Jedi, so they could have had access to a lot more resources than any other planet, and yes Illum was a puny planet.

@StellarMagic
The Star Wars universe is at the smallest possible diameter is 20,040 Lightyears in diameter. I got that from an ISD’s top rating of Mark 5, and that is a full on run, which drains all the capacitors, which is why they don’t do it often, so it leaves their weapons and shields completely offline when they return to subspace. I got the diameter from Zahn in the Hand Of Thrawn Series, where Pelleaon is heading on a voyage (no spoilers) at Mark 5, and from one side of the galaxy to the other, it took 5 days. Mark 5 is about 167 Lightyears per hour, and there you go.

It wasn’t Pellaeon; it was a Victory-Class SD on route to a rendezvous with the Chimaera. Mara Jade speculates that it is traveling much faster than its normal speed of 167 lightyears/hour. But that doesn’t take into account the rarity of straight-line hyperspace routes in the SWU. There are too many unknowns to generate an absolute distance based on a single ship’s normal velocity.

As far as the 25,000 number, that was detailed in the WEG Imperial Sourcebook, Chapter Eight: Sector Group Organization. In that book, a typical Sector Group (sum total of all Imperial military forces in a sector) was composed of four Superiority Fleets (each with 6 Star Destroyers), plus supporting elements. It’s assumed there was one additional Star Destroyer that served as the Sector Flagship, for a total of 25/sector.

Thien someone at WEG applied some fuzzy math and deduced that an Empire composed of 1,000 Sectors would also have 1,000 Sector Groups, and thus the legend of the 25,000 Star Destroyers was born.

Of course, WEG immediately turned around and undercut their own premise by developing small, backwater sectors (see the Minos Cluster in Galaxy Guide 6: Tramp Freighters, and the Elrood Sector in Planets of the Galaxy #3) with only 1 or 2 Star Destroyers backing up a few cruisers and corvettes to patrol a half-dozen to a dozen worlds.

That being said, I don’t find the 25,000 number to be unrealistic on the face of things. It’s obvious that a lot of sectors will have something other than 25 Star Destroyers; some less, some more, some a lot more/less. There is also mention of hundreds or even thousands of Star Destroyers being held in reserve in the Core Worlds and Deep Core. And destroyers don’t have to be everywhere at once; that’s what smaller ships are for. Like modern aircraft carriers, destroyers go with trouble spots are.

Any chance of Halo 4K renders? 🙂

All my favorite X-wing series containers!

So guys what do you think of the second trailer for the Last Jedi?

Love what appears to be a main new afterburner-thrust port in the middle! Maybe it’s always been there but I don’t recall having seen it in operation like that before. Looking very forward to episode VIII!

You know with these models being in 4K I wonder what they would look like in 8K if you are planning it in the far future.

So anyway Fractal what the length of the Altor?

Seems to be roughly 4 km. Which makes me wonder if this puppy’s apparently destroyer-optimized load would just *barely* top off a cruiser running on fumes.

Depends on how dense you think fuel is. I think very, so a Star Dreadnought like an Assertor would drain the thing dry and ask for more, but an Altor could top off a few Star Cruisers.

Would you then posit the existence of superheavy star tankers that could handle the needs of true Star Dreadnaughts? If so, we’d be happy to see your interpretation of such a fleet asset.

Ah, so all six of those refueling arms could handily be engaged at once with destroyer-scale clients. Would said apparatus be particularly (intentionally?) incompatible with non-KDY vessels?

That’s a fluff question. Would make an interesting story. There are also 10 articulated refueling booms now – to the 6 original massive ones I added a Contentor main arm to the top and bottom of each flank of each tank assembly – those would handle frigates. Plus I added 8 of the Contentor small derricks (1 to each upper tank assembly corner) to handle corvettes and such. These pieces just weren’t built when I kitbashed the Altor together, but now I have them and they make sense.

Now that’s a comprehensive update. I seriously gotta squint at these rigs more often before opening my e-craw.

@fractal
It would interest me if you could give a rough estimate of what you think the density of hypermatter is (like, a 100 t/m3, less or more ?). And I think I remember the power output of an ISD to be around 1e25 j, right ?

Neat just a bit bigger than the Compellor.
So fractal speaking of fuel ships do you think you could make a corvette size fuel ship from Rouge Squadron 2 rogue leader & 3 rebel strike?