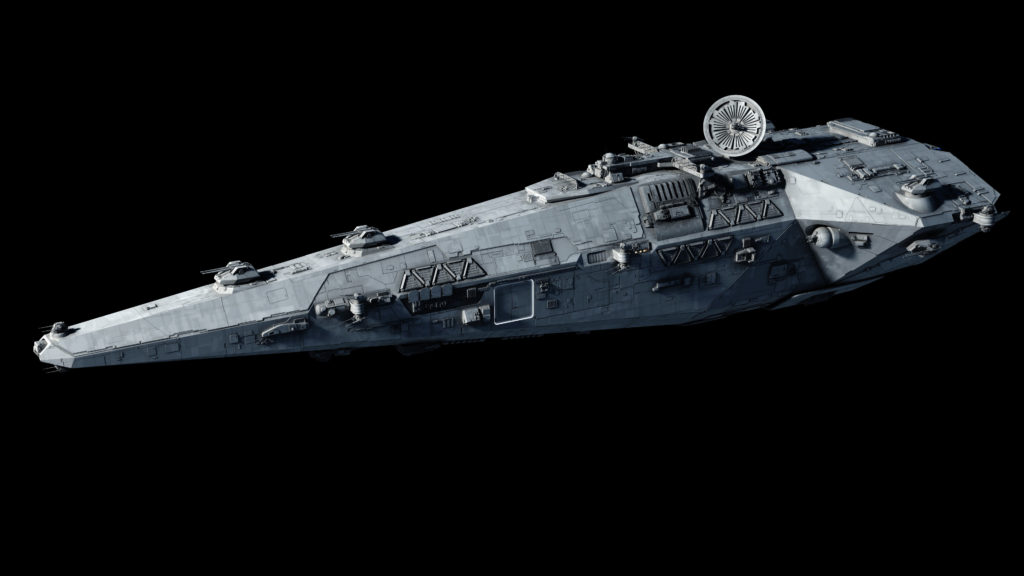 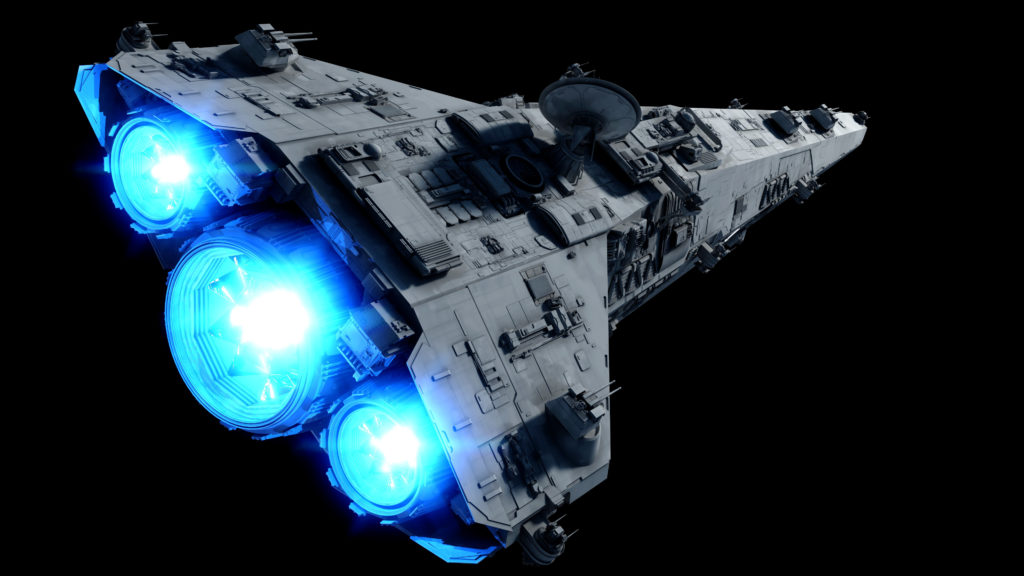 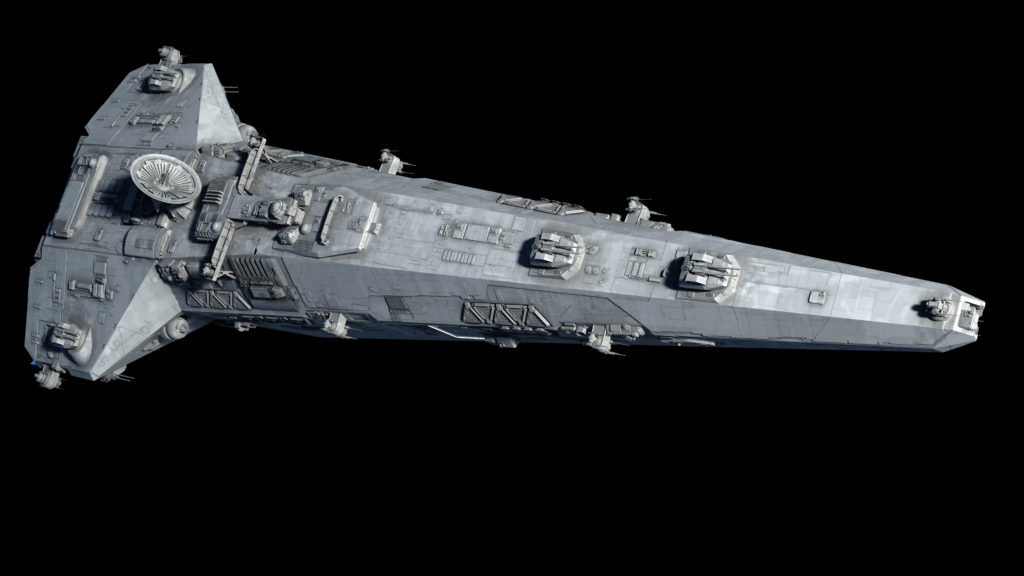 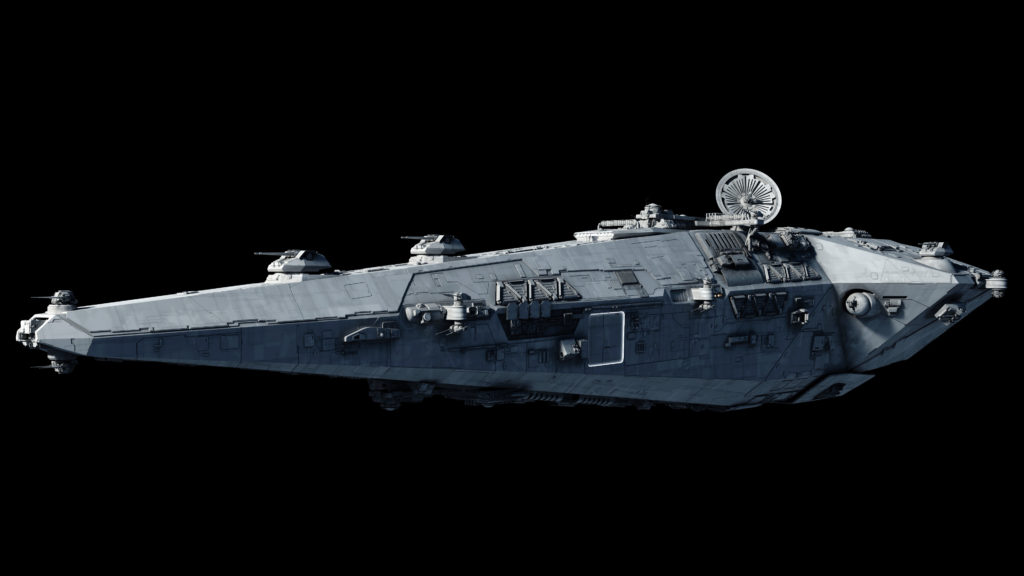 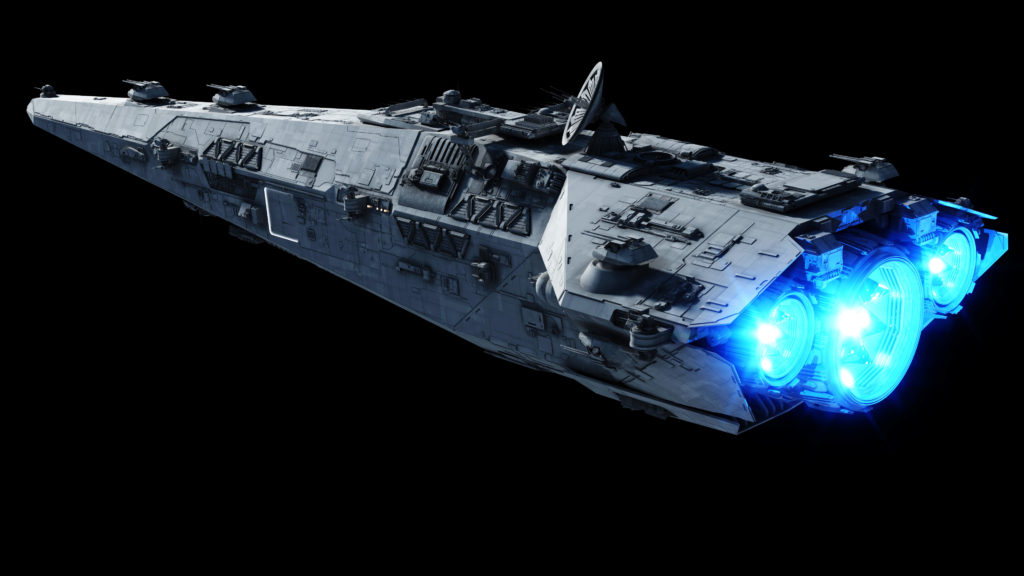 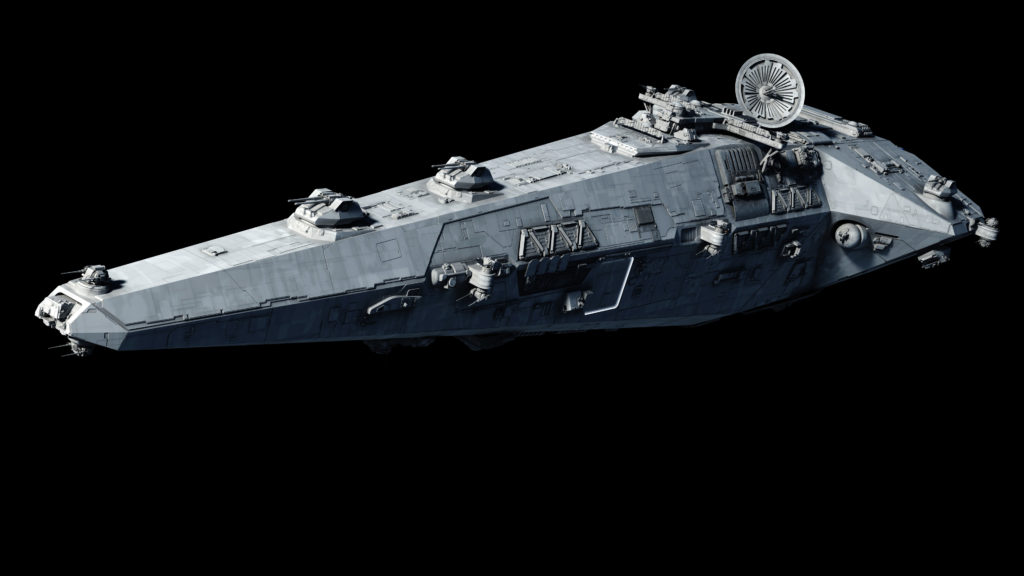 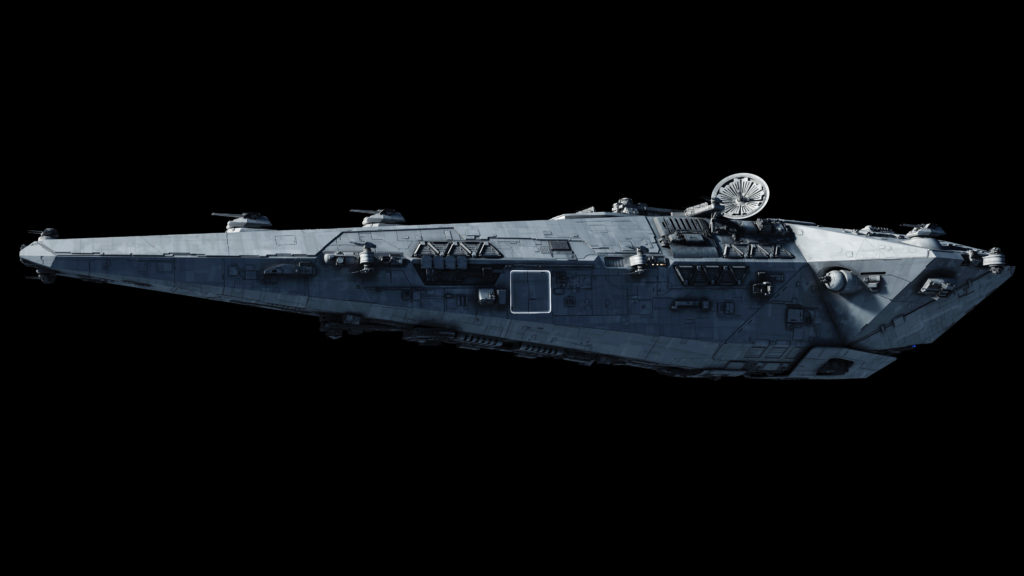 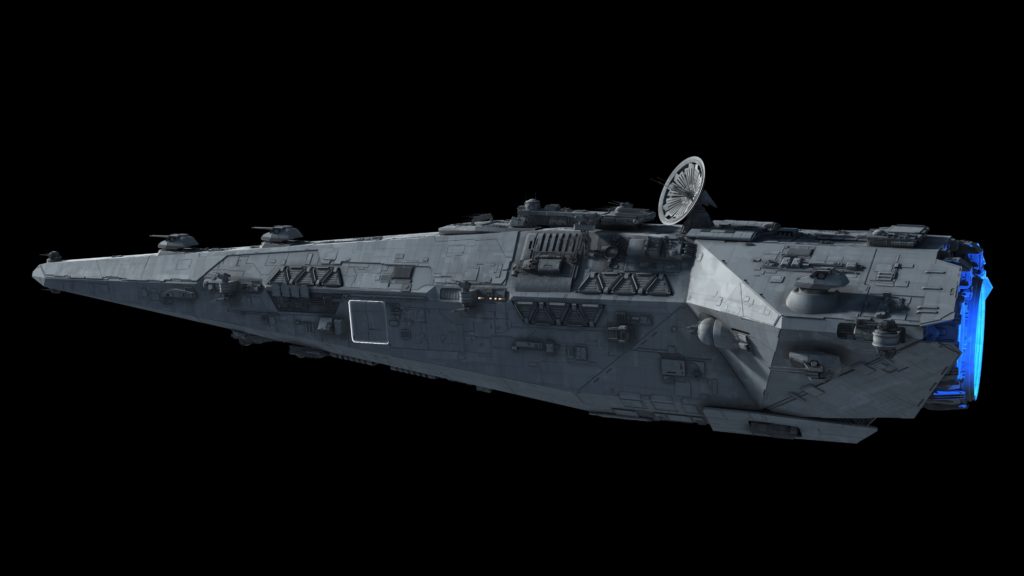 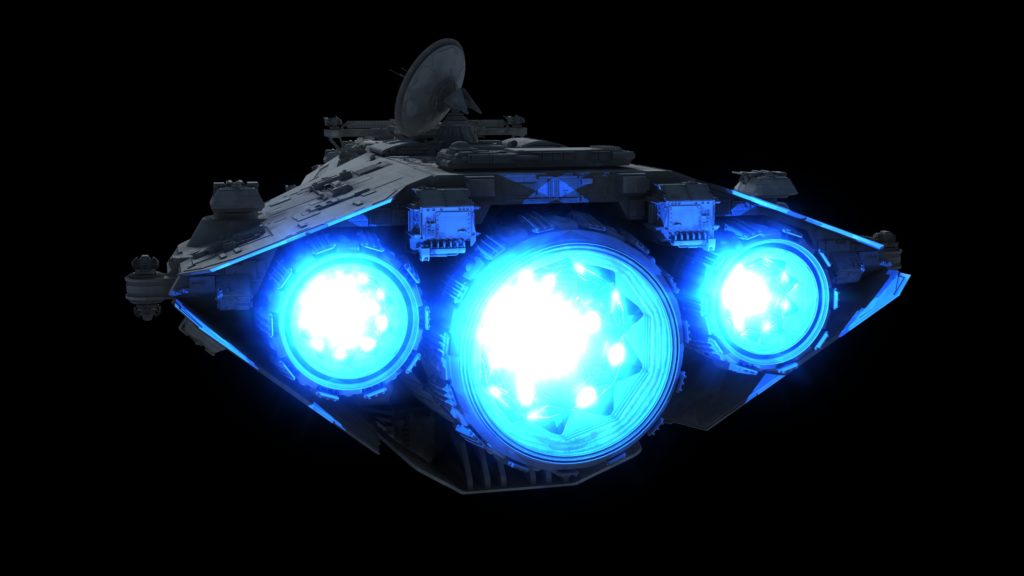 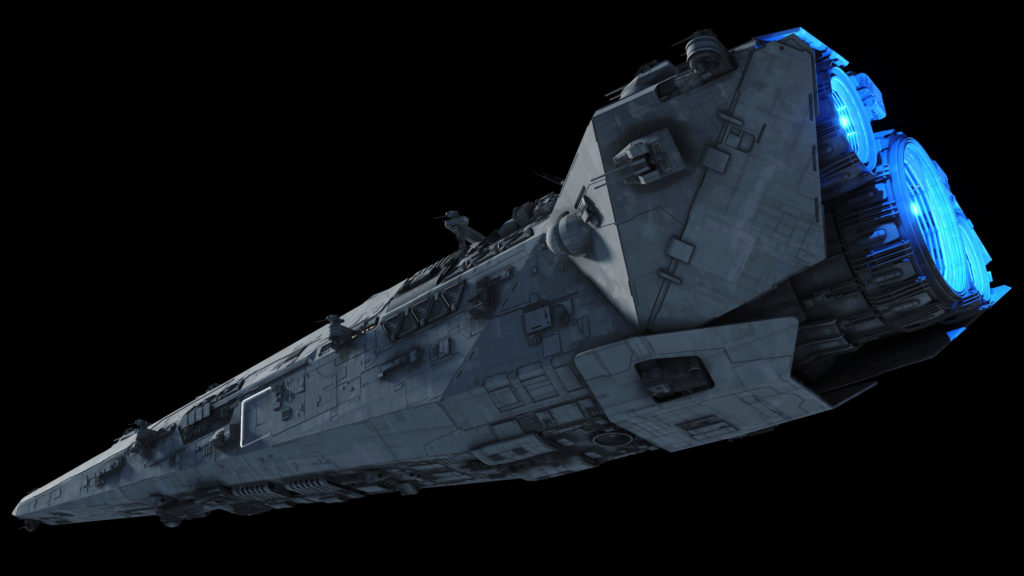 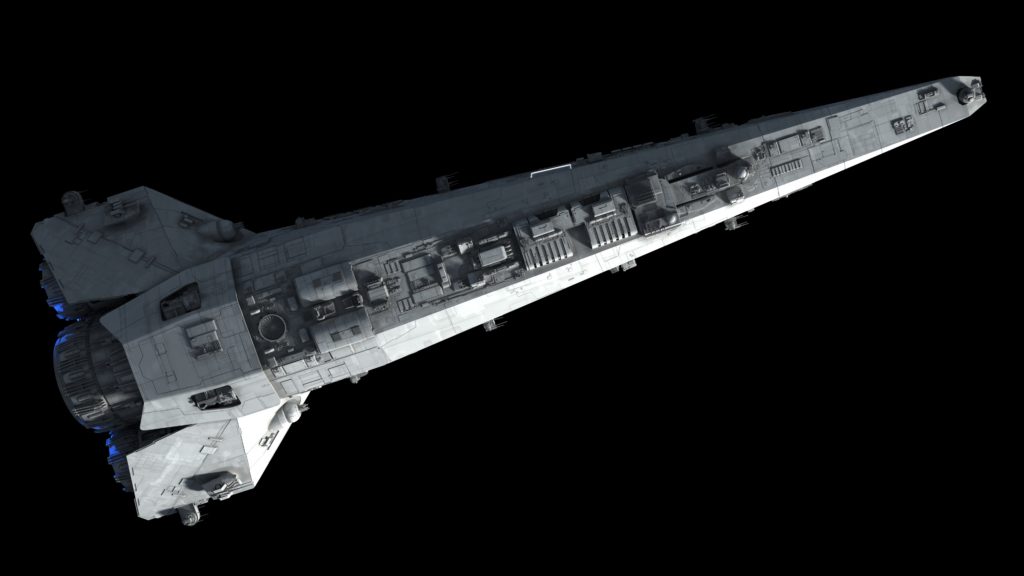 So fractal, How many Starfighters can it carry

So, what ship would this be similar in size too? Is it more raider sized? Or is it closer to a nebulon?

Wow that bridge is really well hidden, took me a while to find it.

I’d like to think of this thing as the offspring of a CR90 and a Carrack Cruiser. A frigate ideal for patrol duties as well as fleet escort. Couple Dual Turbolasers for bigger targets, dual lasercannons for anti-fighter support. Fighters not included. Big engines for speed. Bigger then a CR90, but smaller then a Strike Cruiser. Ideal for escorting smaller and larger vessels. Developed and built for an Empire that no longer has all the resources and finally sees the value of a tactical approach to fleet battles.

I see small and large guns on it, but I can’t really tell which are the ion cannons. Are they the orbs on the front of the ‘wings’?

An exact analogue to the Lancer? Probably something like a combat variant Indictor with a lot of light turbolaser mounts replacing all the sensors, but it’s questionable how useful a Lancer or equivalent is vs putting more point defense on bigger ships or carrying more defensive fighters.

So unlikely to be made then ok.

I just realized that the hull kinda looks like a giant T-65 without wings.

So Fractal what role should the Arquitens be when compared to the Velox?

Are you talking about Velox or the Arquitens?
But what is odd about the Arquitens is that when use by the empire it is now known as the command cruiser and is use as a communications ship, it’s length is 325 meters just 5 meters longer than the Velox and it’s armament only have 4 quad laser turrets and 1 tractor beam projector, it’s fighter complement is either a sentinel class landing barge, 2 TIE fighters, 2 TIE Bombers, 3 TIE Interceptor or 2 TIE Defenders.

Since we see an Imperial-mod Arquitens kill at least one CR90 during that Rebels ep with the B-wing prototype, I’d say those quad turrets are actually (medium?) turbolasers. Their fighter complements & general durability seem rather anemic, however-in the last ep I recall one taking palpable damage from a U-wing strafing run, then getting utterly wrecked by point-blank transmission tower demolition.

It’s hard when they’re against a Plot Shield

Glad you started lighting the drives and running lights for these. They look so much better with the added life to them!

Are the ion cannons 3 barreled? I’m unable to zoom quite enough lol. In your mind do gun emplacement with multiple barrels just enable faster fire rate, or do they fire simultaneously to improve output?

Fractal, if you were ever to do an adaptation of the Vengeance-class star dreadnought, would the overall shape/design/feel of the Velox-class be used as a sort of inspirational starting point for it at all? To me, the Velox-class does sorta have that narrow and sleek sword like look to it, that the Vengeance-class has going on, compared to the typical wedge shape look most Imperial class ships have. Granted the Vengeance is WAY longer than the Velox but whenever I imagine the Velox with the downward sloping armor on the dorsal frame that the Vengeance has overhanging it’s hull, I can really start to see the dreadnought

So guys in the second Last Jedi trailer apparently the First Order still have some AT-ATs (Which look kinda the same) and AT-STs (Those are different like weapon and view window) leftover along side their new walkers.

I would honestly love to see Fractalsponge make vessels such as a World Devastator or even the Suprosa from Shadows of the Empire, though I would say a Venator would do nicely compared to the other two.

I’ve said it before and I will say it again. Fractal, you ought to just call this the Carrack, just as you ought to call the Kontos a Strike.

The difference between the awful Cracken Endurance sketch and your model is far greater than the difference between the “official” carrack and your Velox, and it does no favors to the community if the EA art direction team or worse yet an ILM artist googles the Carrack or Strike and proceeds to find a low-fidelity boxy sketch from the 90s instead of your own work. You’ve got to self-promote if you know you’ve got the superior product.

I think the Carrack is probably redeemable, if I think hard enough. It’s tempting to make the Velox the Carrack, but right now seems a little too radical to me.

Well, you redeemed the Dreadnaught and the Endurance, so if anyone’s up to fixing the Carrack, it’s probably you.

For my two creds, the most crucial tweaks for any Carrack update would be CR90/Lancer-scaled bridge windows and visible LTL/ion/quad-laser turrets, with a rudimentary shuttle/TIE deck coming in third. Moving its reactor(s?) a bit further forward from the engine block also seems like a wise if more structurally-disruptive move.

That’d be a mobile dockyard. Practical, but not in a combat sense.

For instance, what if instead of carrying TIE Fighters in its hangar, a Star Dreadnought carried A Venator or other smaller capital ship. While it would lose the total number of fighters it could carry into battle, it would bring another capital ship with it while ALSO carrying Star-Fighters. Like a Lucrehulk that carries Munificent or Providence-class ships instead of the overwhelming number of Vulture Droids.

That’s a dumb concept. Unless the capital ships being carried are super short endurance for some strange reason. And we don’t really ever see that. Maybe Mandators pre-Clone Wars (by statute) – but I don’t really see any indication that SW capital ships are particularly short ranged. The “carrier” in such a setup would have to be enormous, and enormously vulnerable and slow to boot. It would work as a mobile base concept, but something like that jumping into combat is incredibly dumb.

An Imperator or MC75 can lug around a light corvette like a CR90, which in turn can haul a few fighters, but I think that’s the extent to which you can stack carriers. The Death Star was also seen in Rogue One to have hangars capable of handling Imperators for service/repair/refueling, but there really isn’t any reason to launch destroyers in combat rather than having them jump in on their own.

I’ll admit to idly pondering how many damaged or repairs-overdue Impstars you could squeeze into an Executor’s ventral cutout, but making that regular practice would be most unwise. Sadly, this also reminds me of an SDN thread debating whether (retro)fitting a dreadnought with grav-wells would be riskier than simply perma-docking a 418.

Do u have link to that?

Or you could just permanently dock a Venator or two with said Dreadnought and you don’t have to lose any fighters.

If you permanently dock a ship then what’s the point of having the ship? You can fit much more fighters in the same volume because you wouldn’t need all the structural support mass of the smaller ship just build up some hangars on the bigger ship.

There is mention in the EU of the Federation Core Ships being able to mate up with other hull types than the standard Lucrehulk-Class Carrier, including dedicated space combat platforms. Replace the Death Star in the center with a Federation Core ship and this would be a workable design.

Look at the star destroyers coming from the hangars.

Kill it with fire.

@STONEhenk – I’m trying not to. It’s a stupid concept, and the only redeeming quality I can find is the possibilities it presents for other craft, specifically what I mentioned regarding the Core Ships.

Its really stupid. I mean, this death star isn’t even the same scale as a real death star. It have to be the same size as DS2 and launch super star destroyers like assertors and executors from its hangars.

Are many of the smaller weapons automated, then you could have a much smaller crew just to operate the only the system and the larger weapons.

Fractal, what do you think is the average acceleration of ships in Star Wars ?
I ask that because I recently rewatched ANH and I noticed something. After it jumped out of hyperspace in the orbit of what should have been Alderaan (say 10.000 km from its surface, as usual), the Falcon chased the lone TIE fighter to within a few hundred km of death star, who was at 75.000 km from the planet, in a 35 seconds uninterrupted scene.
So, the Falcon and the fighter it was following made around 65.000 km in 35 s, which equate to a constant acceleration of at least 10.000 g. And it’s fairly generous since the Falcon could have actually jumped out on the other side of Alderaan, adding at best 30.000 km.
And, except error on my part, an ISD can keep up with the Falcon, at least in linear acceleration.

I think a moderate estimate of average for a ship (vs a fighter) is on the order of 2000-2500g. There are some bits of much higher, like Dooku’s skiff blasting out from Geonosis atmosphere for instance, but the solid published numbers are on the order of 2000-3000g for warships, high 3000-6000g for fighters. Most ships are obviously going to be slow civilian anyway.

A few awkward angles, but overall this thing’s still both streamlined & very sharply-armed for something barely outbulking large corvettes.

So Fractal what do you think of this unusual ship called the Warrior class gunship?
:

As point-defense systems go, lasers & LTL seem rather more versatile (or at least longer-ranged) than “spray junk in the missile volley’s general direction,” though perhaps said measure could be handy for ships with limited arcs/space for PD mounts (the CR90 leaps to mind).

Right but as I was looking at the gunship I found another ship that is well see for youself:

/revision/latest?cb=20051020014907
This flying spaceball is the Aramadia class thrustship the size all around is 240 meters has 8 Turbolaser batteries, 6 ion cannons, 3 proton torpedo launchers, 4 Missile launcher batteries and 4 Gravity bombs it also carry 40 D-type trifoil fighters which look like this: 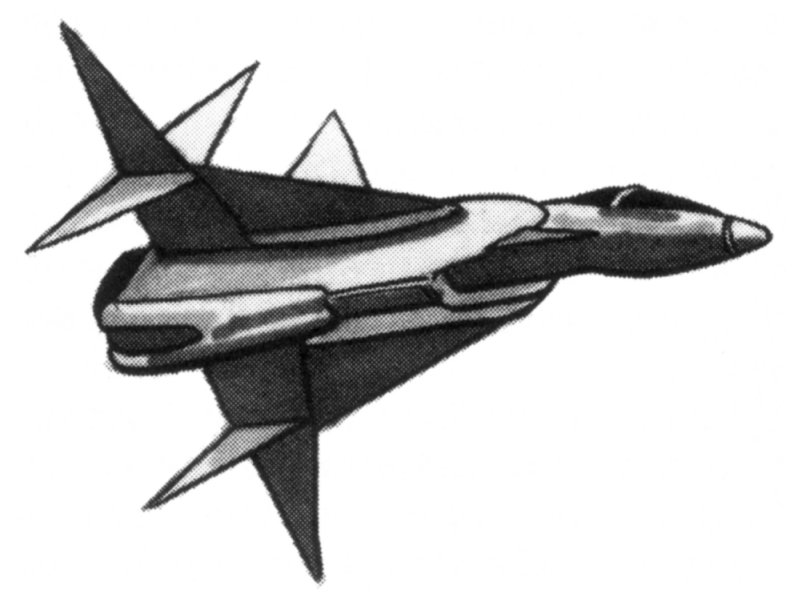 By away here the rest of the info on the Gravity bomb: http://starwars.wikia.com/wiki/Gravity_bomb

Oh, right, the Black Fleet trilogy. Those Yevethan murder-billiards’ weaponry seems plausible for a medium corvette-sized sphere (presuming those are medium turbos/ions), and they *might* be able to cram that many light fighters into an equatorial deck, but dear lord does the story blow their threat level out of all proportion. One of those things has no business slugging it out with an MC80/90-ballpark “cruiser”, unless those grav-bombs are on a game-changingly different level from more common flavors of projectile.

I hate how a lot of those New Class designs are depicted in those drawings, the ones that Wookieepedia says are from the RPG sourcebook Cracken’s Threat Dossier. Visually, most of them look terrible.

Personally, I ignore RPG stuff that does not follow what is established in higher levels of EU canon. A novel’s description of a ship > a crappy picture from a sourcebook.

Cracken’s Threat Dossier pretty much caused me to adopt the same policy (yes, I actually bought it back in the day). There are several places, especially in the Corellian Trilogy section, where it’s painfully obvious that the authors didn’t bother to read the original novels. Meanwhile the artists seemed to be deliberately trying to make every ship look as stupid as possible. Fractal’s redo of the Endurance and Nebula-class ships was a badly-needed upgrade.