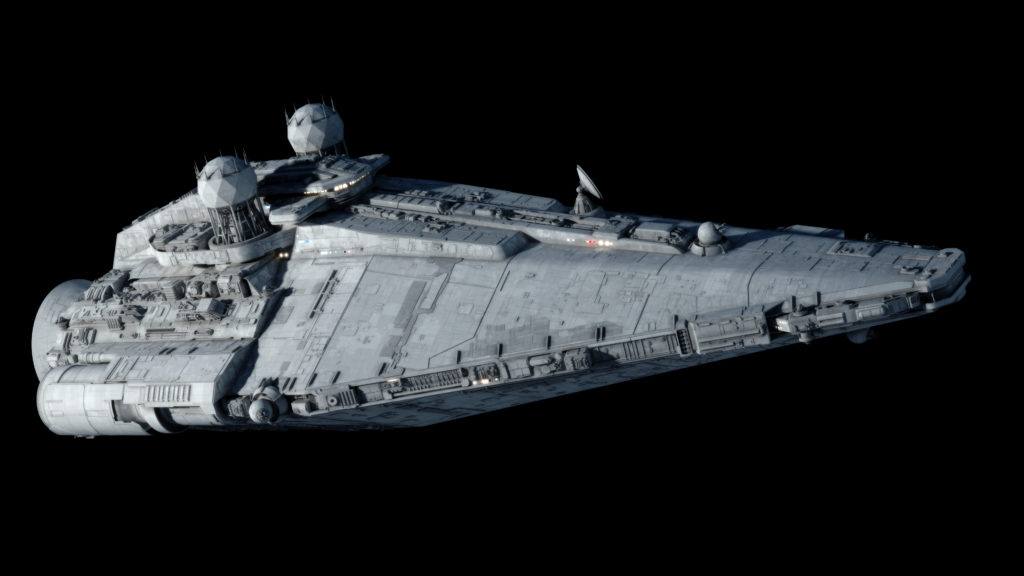 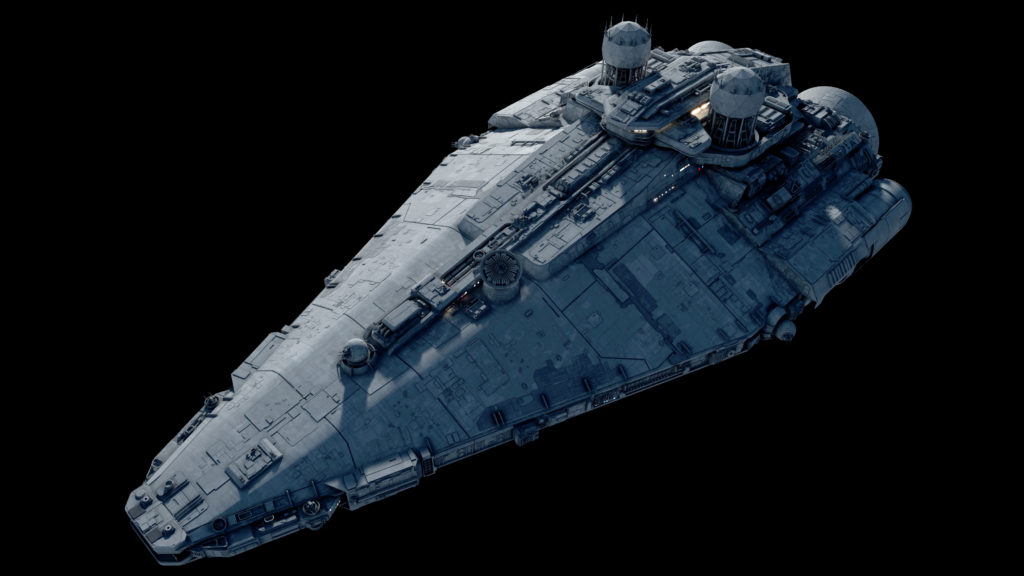 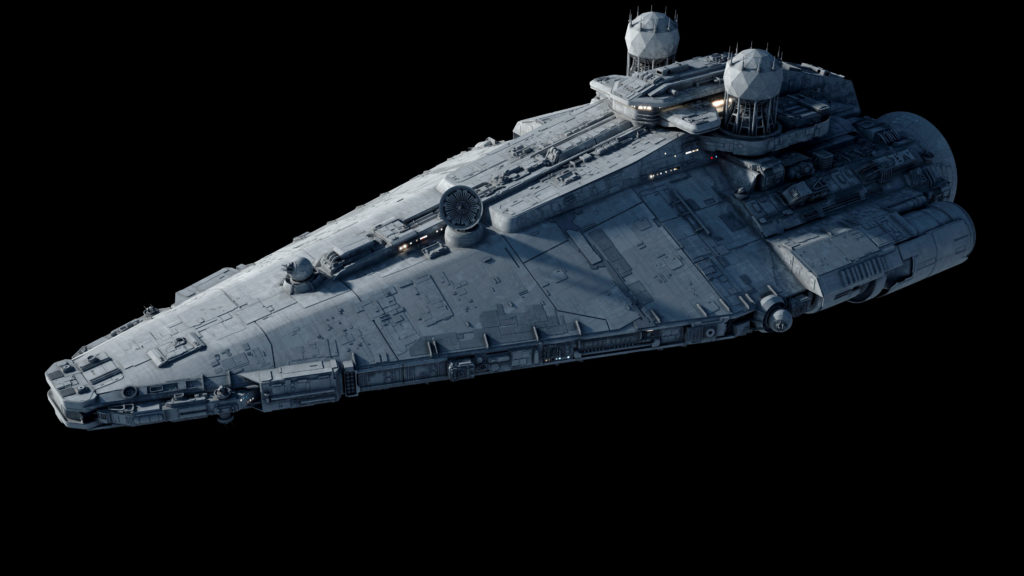 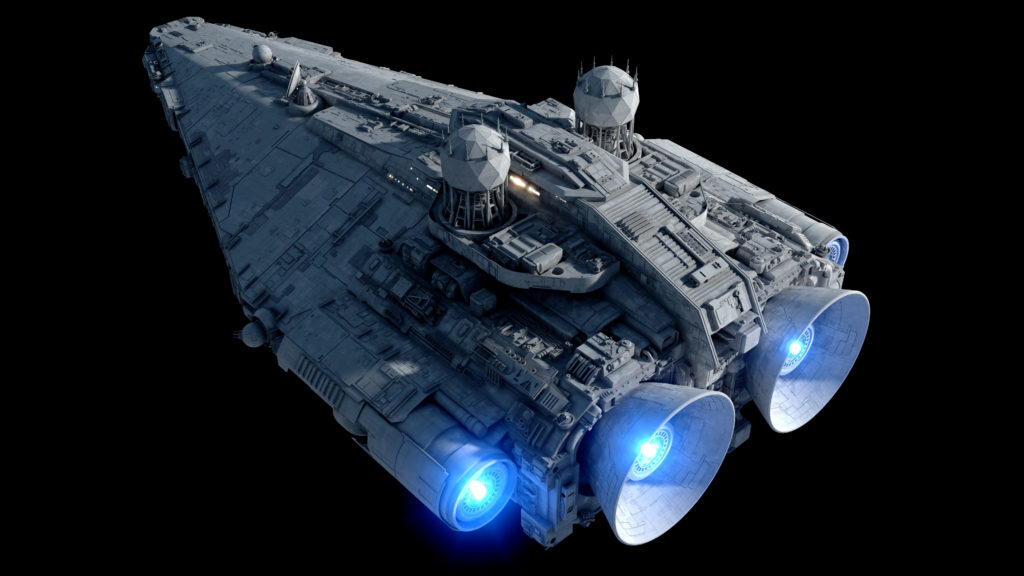 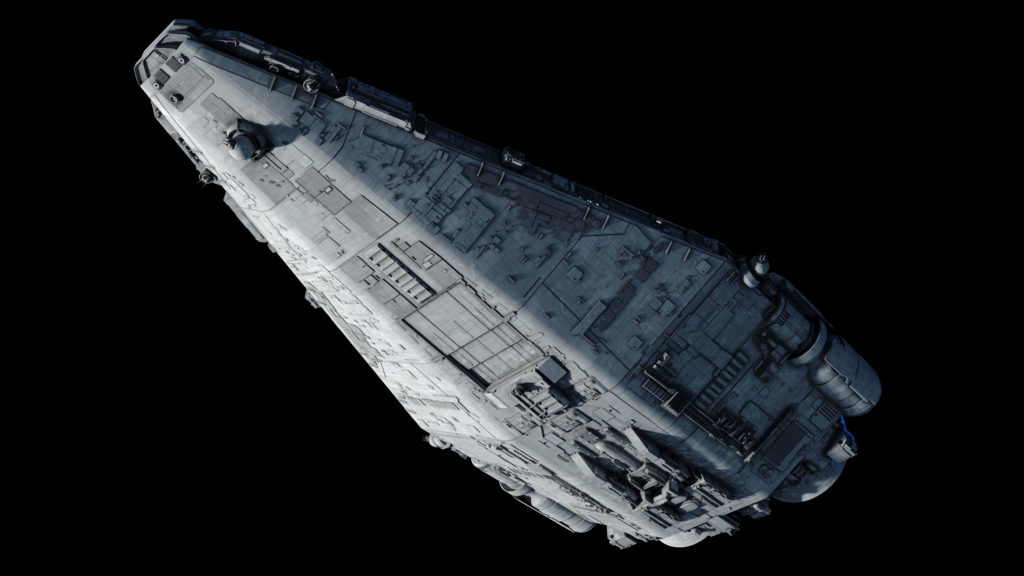 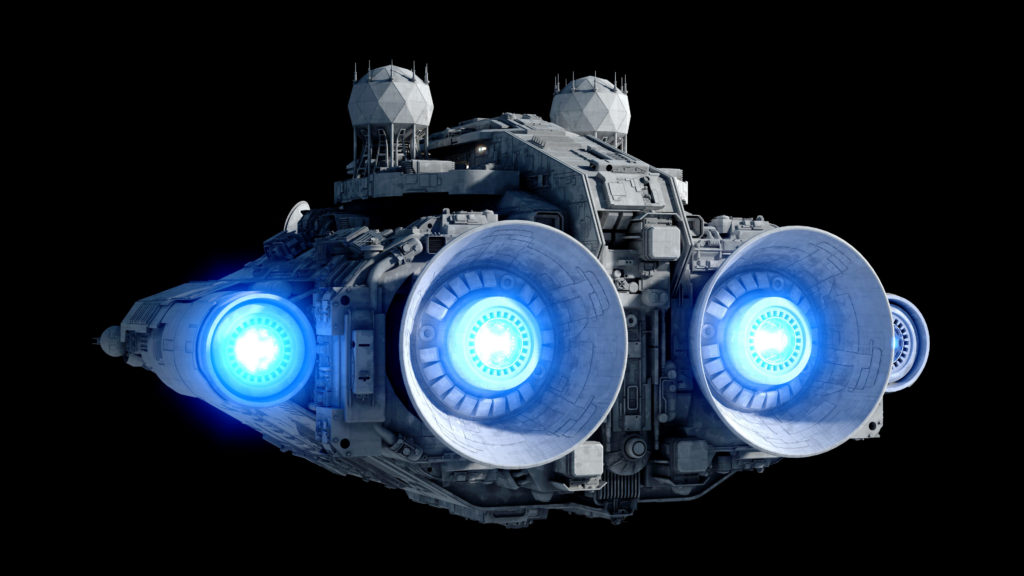 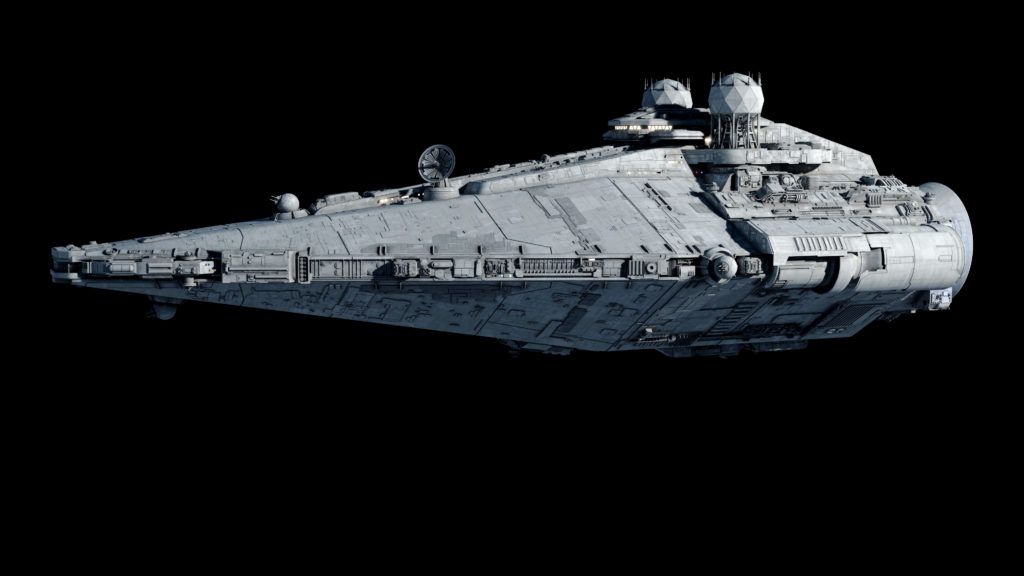 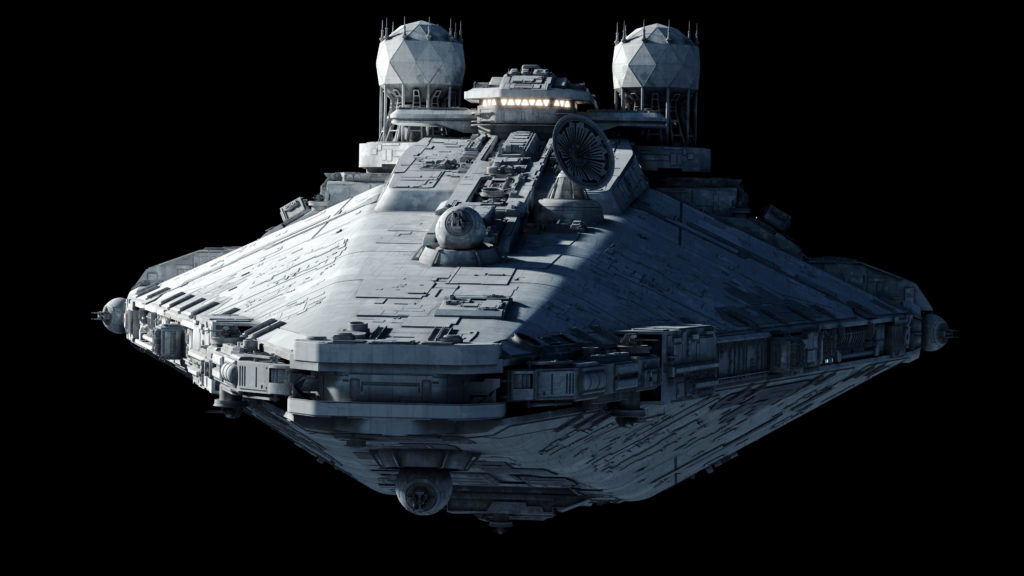 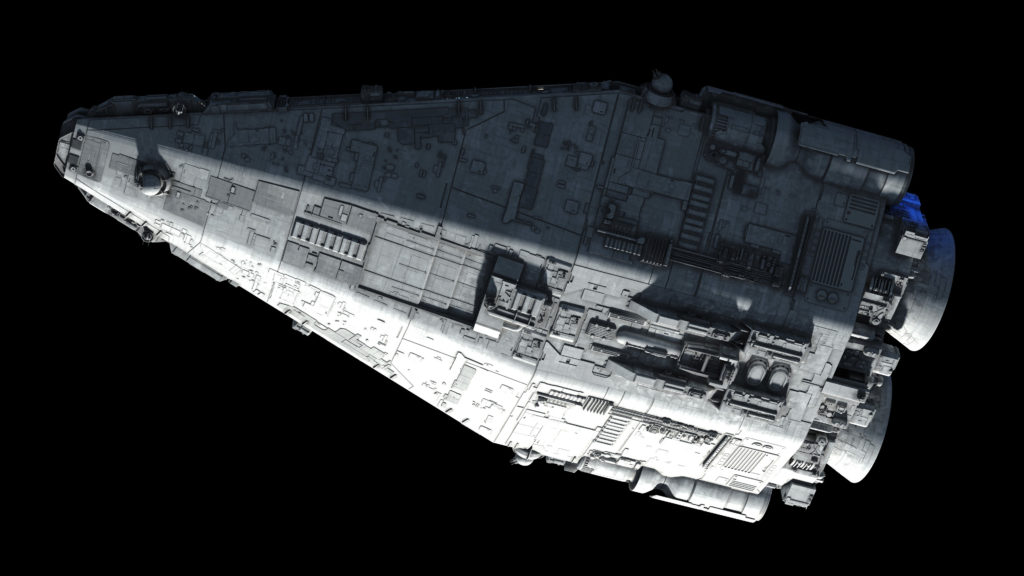 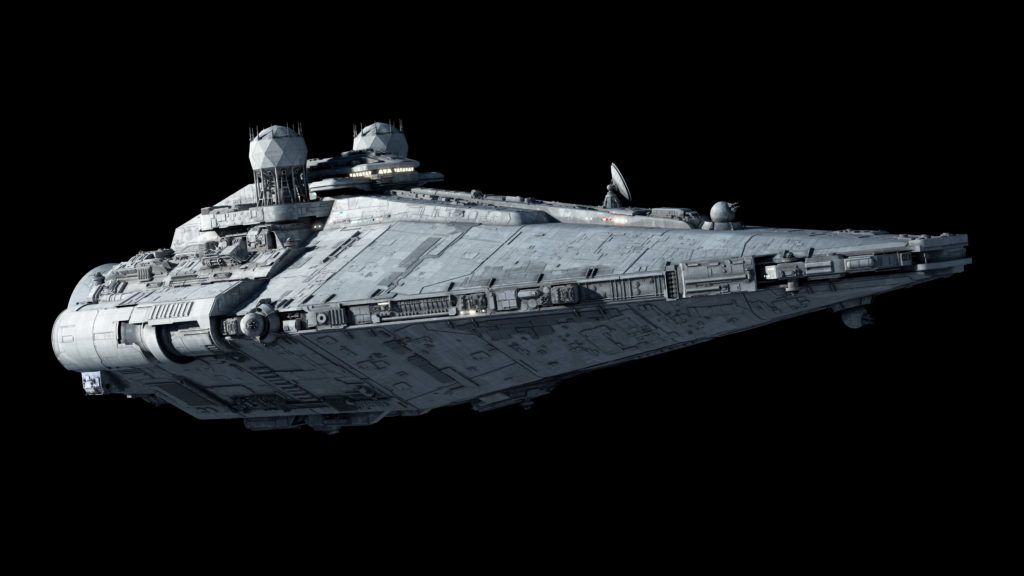 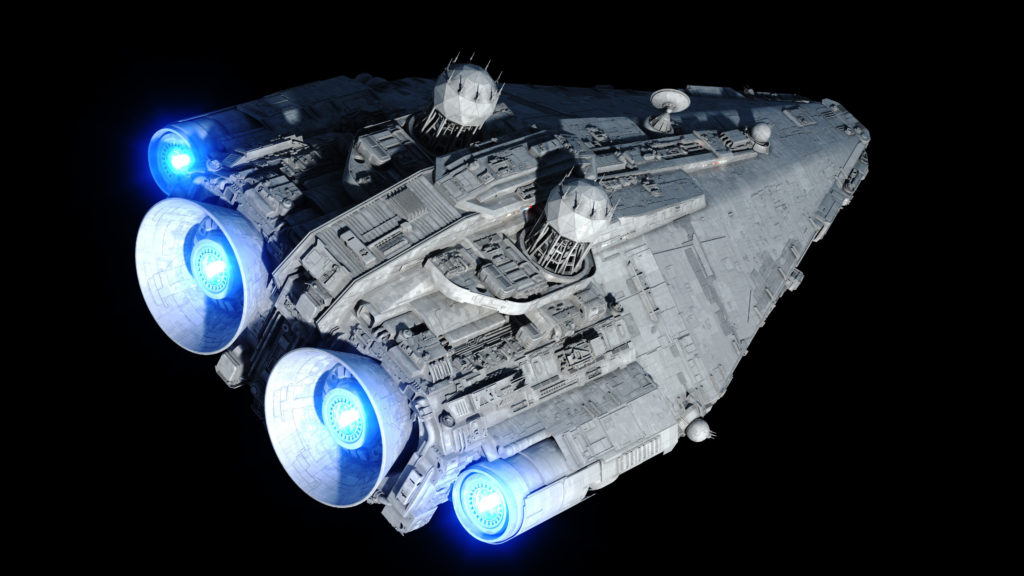 It has, so I think, four quad turbolasers and a few point defense turrets. These four Turbolasers had probably a somewhat similar Firepower to an Imperial 2 class Star Destroyer broadside, and those were made to vapotize entire Capital Ships. And if my head-canon is somewhere near the real, those were only patrol ships that would hunt down some pirates or a few Rebels. With this purpose the Turbolasers would be enough to strike fear in the most eyes and let them concede.

Really like the look, but it is sad we don’t get a size comparison.

Here. 6th from the top

Bit of an odd design, reminds me of a tiny Imperial ship I’ve only seen in Empire at War. Makes it kinda hard to imagine this thing is about half the size of an ISD 😛

i think the armement is my biggest cocern, i dont see any turbolasers, just what looks to be either laser cannons or ion cannons, i deffinitely see a few laser cannons on the thing. Maybe the main guns are turbolasers, but if thats the case then i think its weird for the empire to put them in a ball like this. my guess is that these are either heavy lasercannons or light turbolasers. i think a third the size of a isd is fine for a frigate, but frigutes generally act in a formation, or at least in fairly large groups, adding pursuit implies it either hunts solo or in packs of 3 to 6 at most. i think pursuit cruiser is a more himogenous(pardon my spelling), or if you really want it to be a frigate call it a patrol frigate. i dunno, pursuit frigate just bugs me, its like calling something a patrol battleship, the two terms feel incompatible. these are just minor nerdy gripes though, starwars never uses nautical terms correctly, and most moncalamari ships dont have visible weapons at all. id still buy 3 of these if they were model kits and put them on my shelf.<3

They’re heavy turbolasers, they just happen to be in ball mounts. It’s been described down thread.

So Fractal since the Fulgor’s power generator is mostly use for the engines to have great speed does that mean it have weak shielding?

The relationship between shielding and reactor power doesn’t seem perfectly direct. So, meh. I’d guess that the surge capacity is relatively low for its size, but dissipation is really good (the engine heat also needs to be removed, so I bet the ship has very good capacity for this).

What’s the Fulgor’s pedigree (as in, what company manufactured it)? It certainly has a different look than most of the KDY stuff. Is it possible that this is the “big Corellian ship” Han Solo was bragging about outrunning? No one has ever done anything with that throw-away line, but this ship would seem to fit the bill. As a dedicated pursuit ship, I don’t imagine outrunning one would be a mean feat, and 618 meters is certainly “bit” compared to something the size of the Falcon.

By away Fractal why is the first picture look blurry?
: https://fractalsponge.net/wp/wp-content/uploads/2017/10/fulgor16.jpg

@Fractalsponge an odd request, but have you ever thought about doing the Victory II-class frigate from the original Battlefront 2? It have been my favorite frigate for a while, but the general low level of detail in the game and lack of further sources is a little disappointing.

My inner symmetry addict keeps nudging that scanner dish onto the centerline, but this is nonetheless the Imperial Starfleet’s most charmingly compact hotrod reconwedge, cybernetic hands down. And for the record, ball turrets make anything bigger than a Nebulon look good.

So Fractal since you have made the Harrower class Dreadnought for the essenital guide to warfare what is your thoughts on that ship?

I was looking at the engines and i realized, all 4 of the thrusters are the same, so why the cones around the 2 center ones? Wouldn’t removing those be beneficial, it would cut down on weight and make it even faster than before.

Mind you though, I love the design as-is, I’m just one for function over fashion.

Perhaps the cones are filled with gravitic and electromagnetic manipulation field generators for thrust vectoring?

They might also be more shield-friendly than the thruster nozzles themselves & thus lend an extra smidgen of protection.

Distinctly imperial, but a refreshing deviation from standard Star Destroyer design.
I’ve always wondered how that kind of spherical gun mount can work. Some BB8-like electromagnetic attraction with inductive power coupling? Or is it just my lack of imagination in regards to mechanical engineering?

I’m picturing a scene where that ion cannon delivers a full hit to the Fulgor.
Hopefully the Imperial engineers devised of a way to prevent all those guns drifting happily off into space…

Heh, indeed, that might be quite a problem, wouldn’t it?

Interesting possibility, perhaps something along the lines of the proposed robotic ball-and-socket joint.

Maybe safety locks made from this:
https://www.popsci.com/scitech/article/2009-09/steel-velcro-not-sneakers

It is feasible that they have an interior frame that connects to the hull. They could use the same system that the AT-TE’s ball turrets used.

how many tie fighters could it hold?

Anonymous
Reply to  A person

Very few of them like 1 light squadron since Fulgor’s interior is mostly engine for high speed since it is a pursuit ship.

Fulgor need more guns 😉 this thing was corvete with size of frigate.

That’s sort of the point – trade guns for extreme speed.

Yep and I think the Fulgor’s length is somewhere bewteen 600-650 meters.

A person
Reply to  Fractalsponge

can we get an eclipse or a starhawk rebel ship(from the battle of jakku)?

Anonymous
Reply to  A person

Well for the eclipse no he will never make since he really isn’t a fan of it.
as for the starhawk also no but the reason is because we really have no idea what it look like apart from the fact that it is a battleship and it’s tractor beam were equipped with magnite crystals which give it ten times the strength of a star destroyer which can enabled a trap and can move a ship many times it’s size.
here some more detail on the starhawk: http://starwars.wikia.com/wiki/Starhawk-class_battleship

Sheesh, more ‘crystalz=xtra powah’ tradeoff-sidestepping bullroar? I mean, if ten times the *proportional* tractor-wattage of an Impstar translates to a Legator-tonnage ship that can (a) hold its own in conventional combat and (b) play suicide tug with an unwilling (albeit possibly battle-maimed) Executor (though apparently with *just enough* momentum/angular velocity to crash Ravager but leave it shockingly intact), that’s headscratching enough…but just prior, another ship in this apparently rugged-as-frak class gets killed by a kamikaze Impstar. Granted, that could’ve *also* involved prior battle damage (again) and/or said destroyer lightspeed-ramming it in the reactor…but frak, that Crystal Factor(R) is one thing I’d rather not see Disneyboot writers keep lifting from D.C.

Eh, just the fact that the Executor decelerated at a rate of roughly 30 km/s² in ROTJ along with the rest of the fleet proves that Star Wars material science is ludicrously strong, making capital ships landing relatively intact internally consistent.

To quote Mike Wong from SD.net,
“Let’s take its cross-sectional area at the thickest point to be roughly 5.5 million m². If the ship is 10% solid, this would mean there is roughly 550,000 m² of metal which has to withstand a total of more than 1E18 N of force, for a resultant stress in excess of 1.8 TPa (nearly 7000 times the yield stress of structural steel). In fact, even if it were a solid block of metal, it would still have to be made out of a material which is 700 times stronger than structural steel in order to survive the acceleration without permanent deformation.”

That being said, full agreement on crystals being stupid.

Yeah the only thing that would make it worst if the Starhawk size was either at best 2-4 km in length if not more since it is classified as a battleship or at worst just smaller than the Imperator like the Mon Calamari cruisers. I prey the latter will never ever happen.

May I ask Fractal when you updating these ships in 4K some of the lights are red so what function do they serve for or are they just for looks?

For some reason I always think that this thing is scaled as a corvette at first glance, but apparently it outmasses a Vindicator. I guess when the Empire wants to build an A-Wing, they decide to make it heavy frigate sized.

I find myself pondering the successful defection rate of Fulg crews who got the itch to pull a Rand Ecliptic (and managed to gank/contain their security wonks, natch). If you can outrun next to everything & soak up your average destroyer’s fire long enough to jump out…