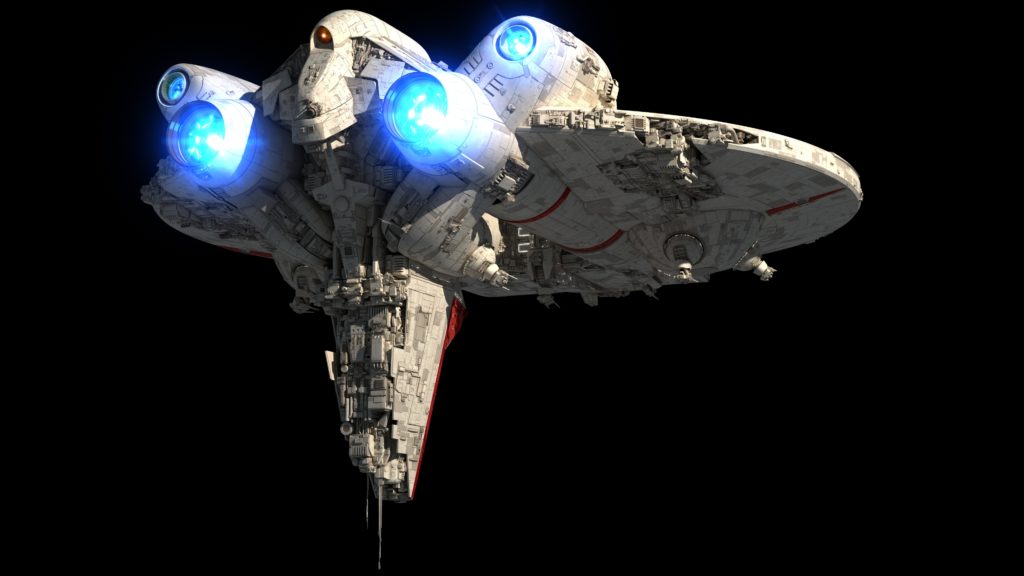 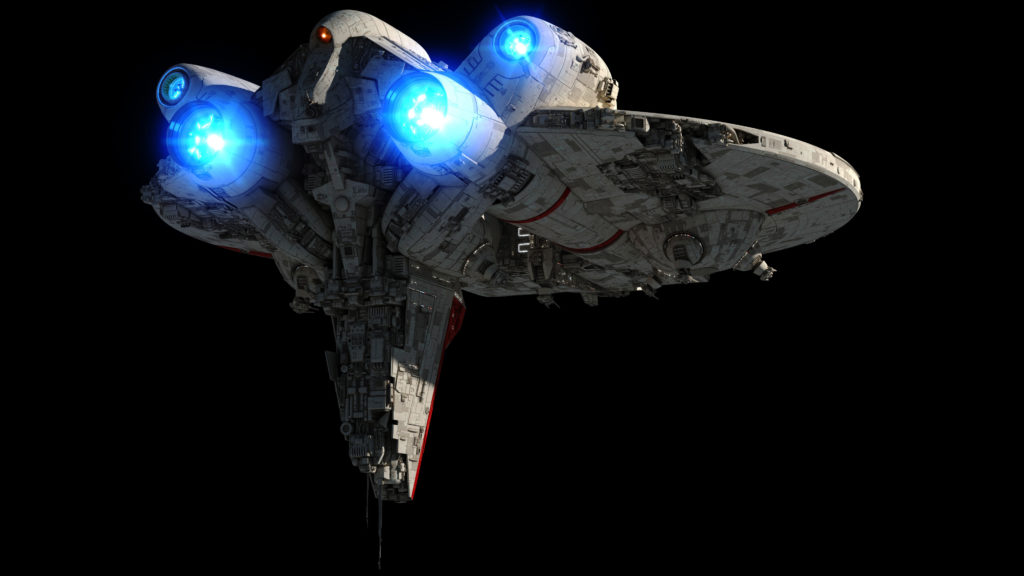 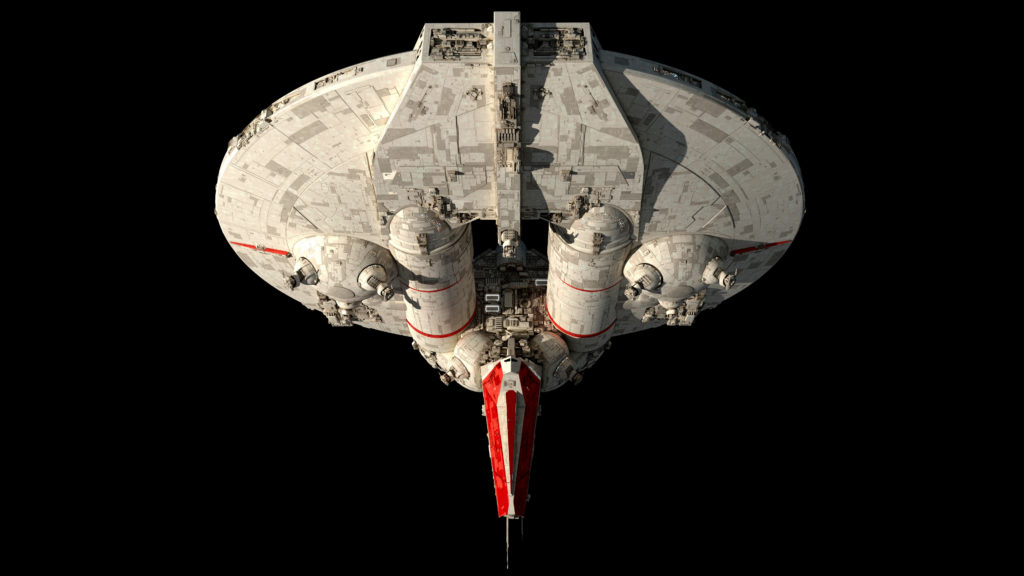 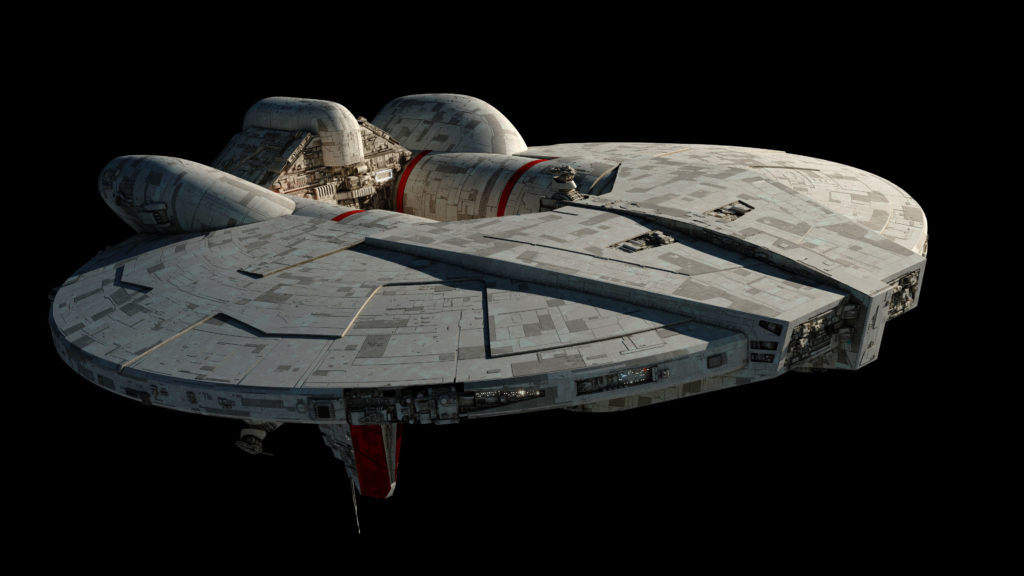 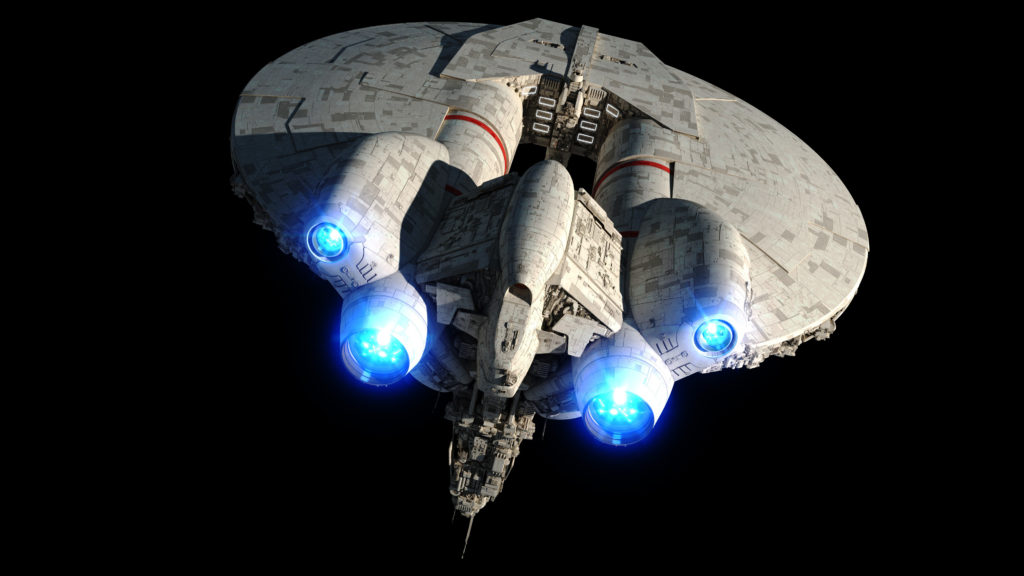 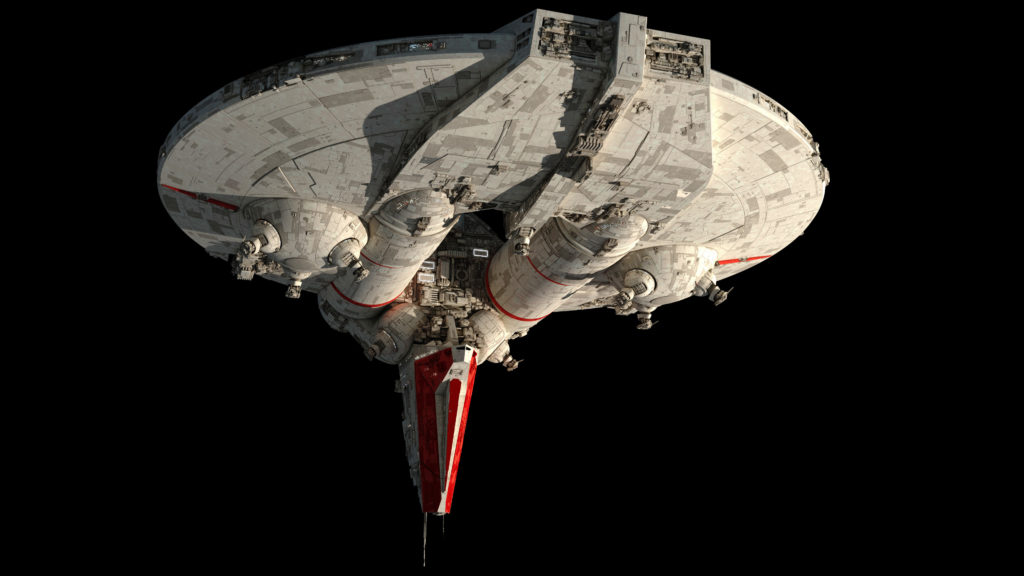 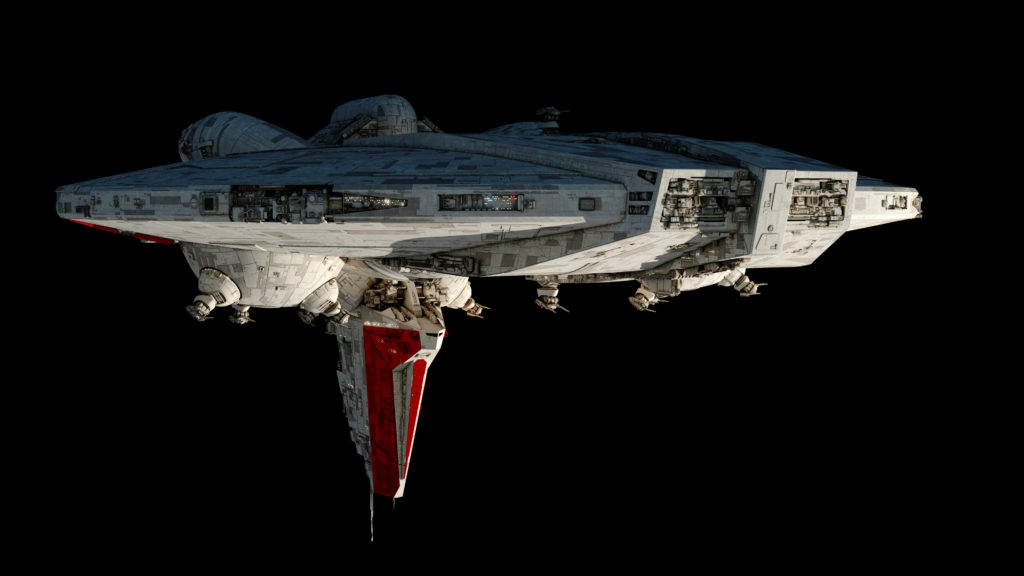 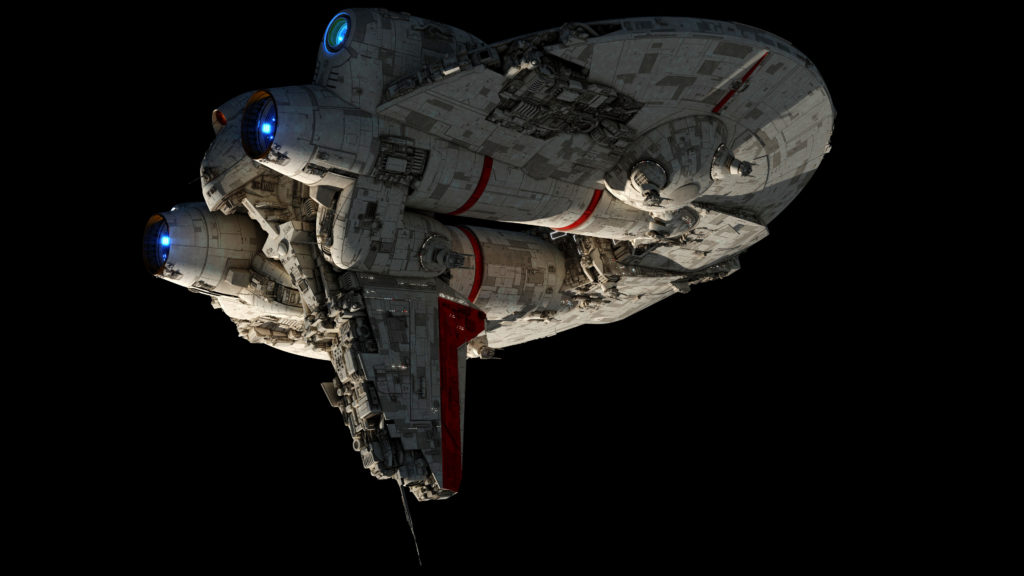 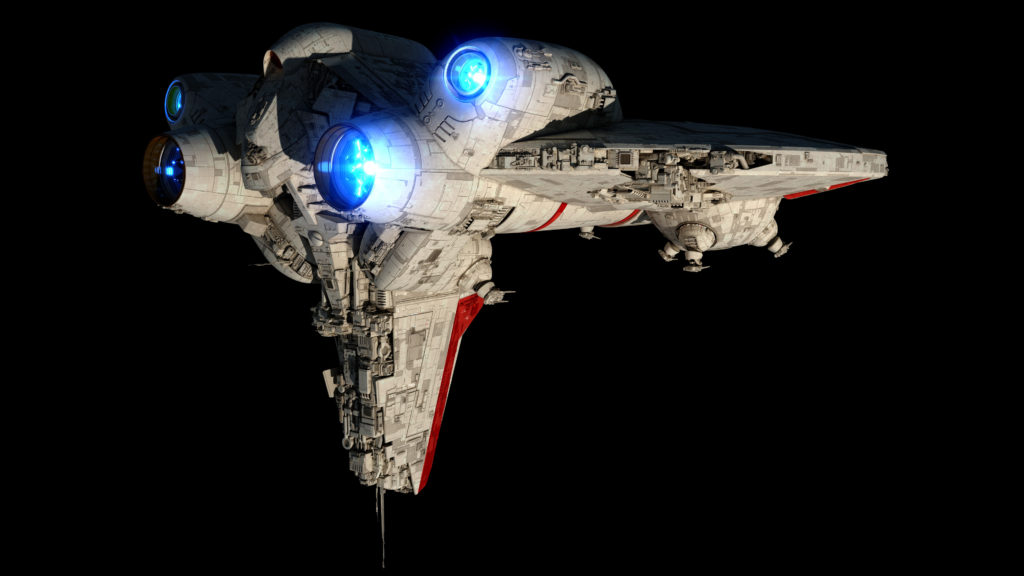 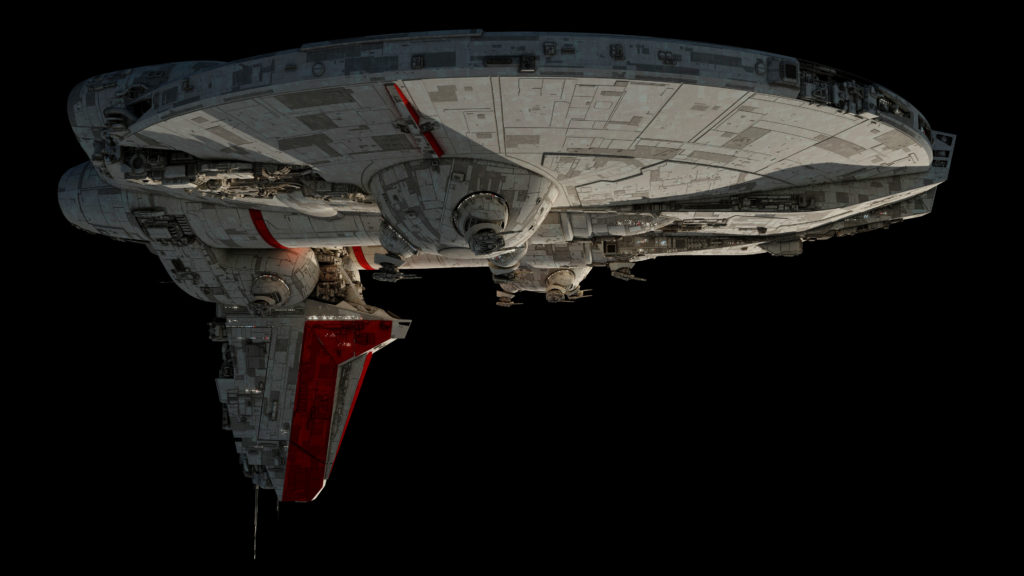 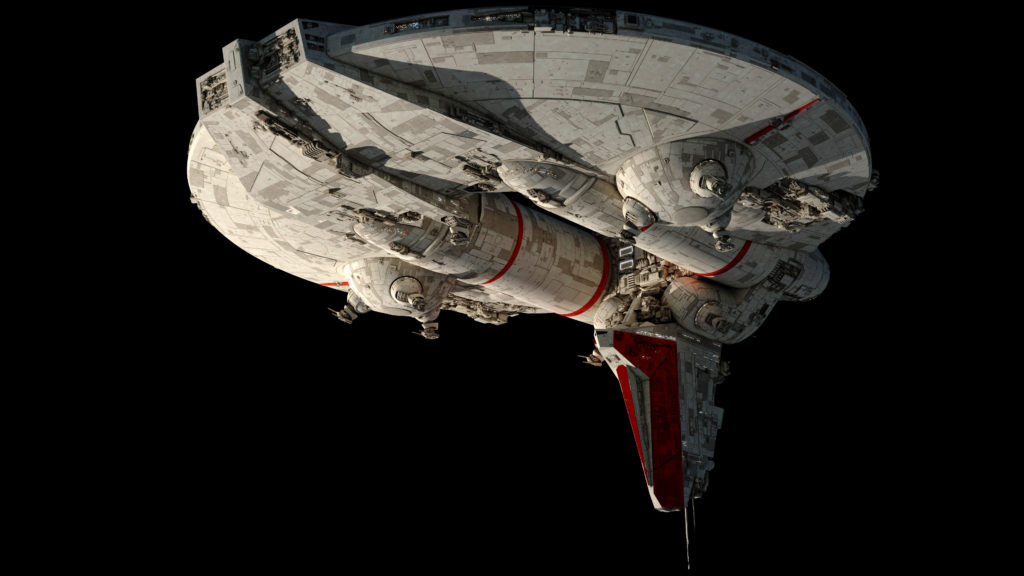 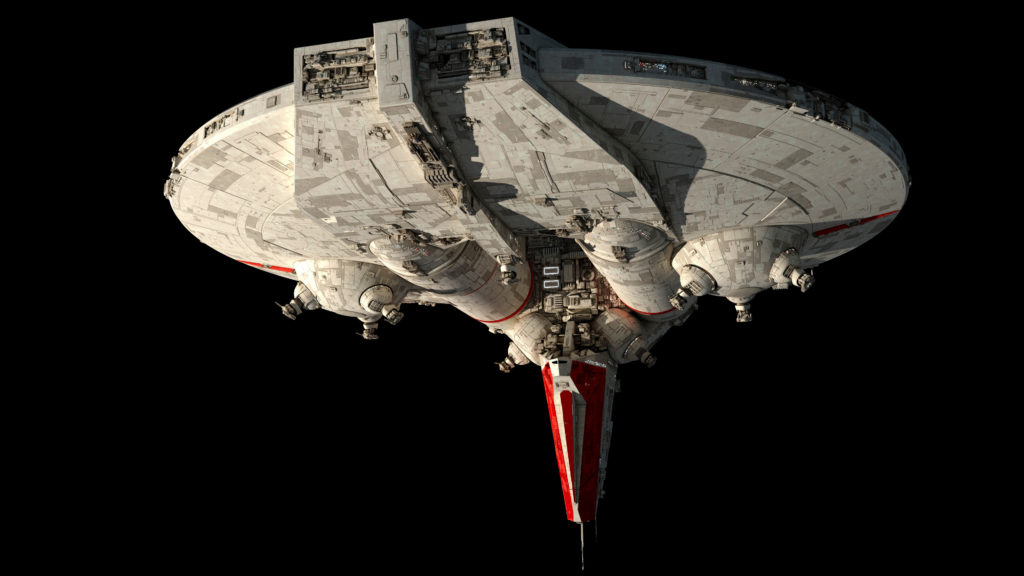 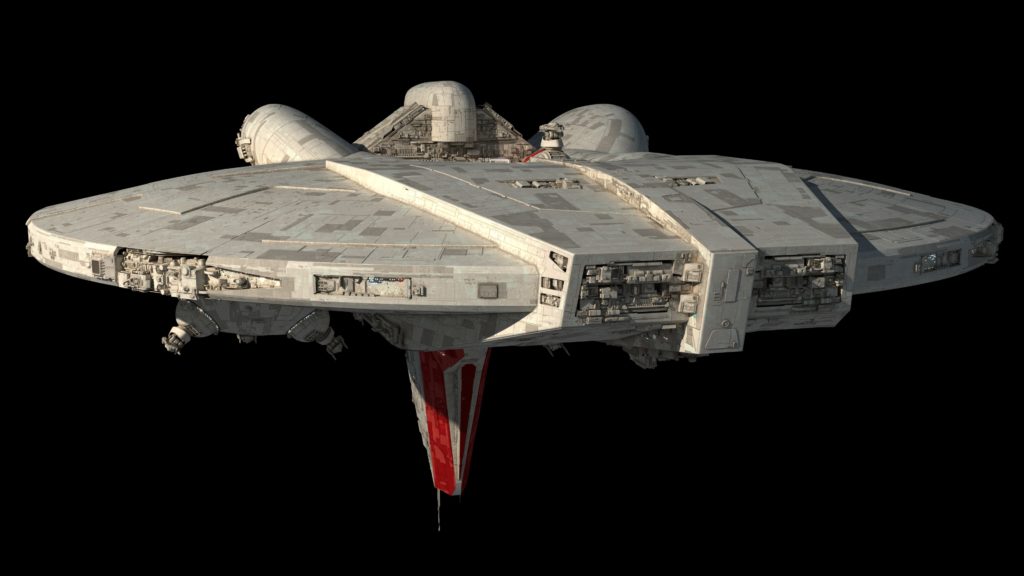 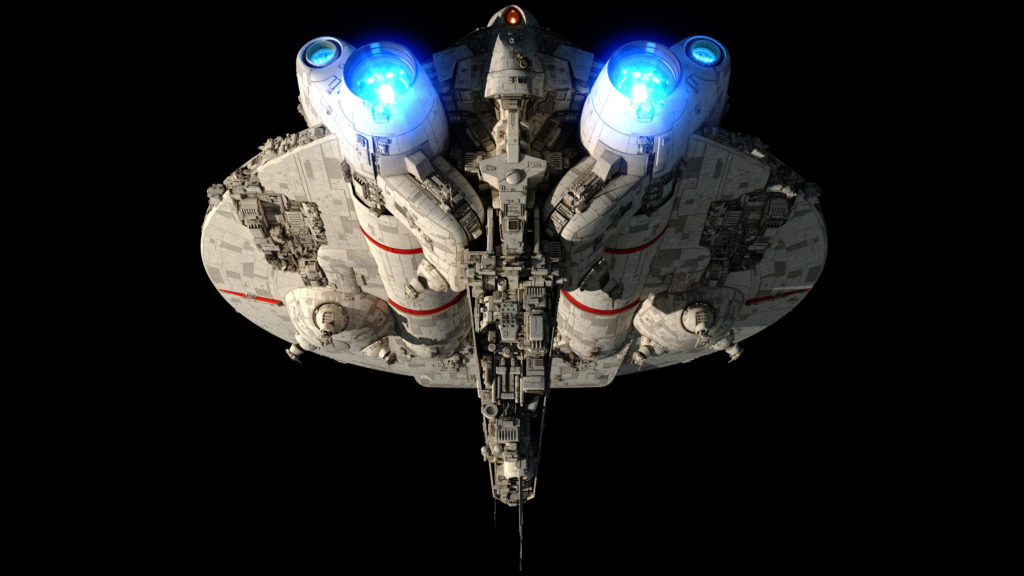 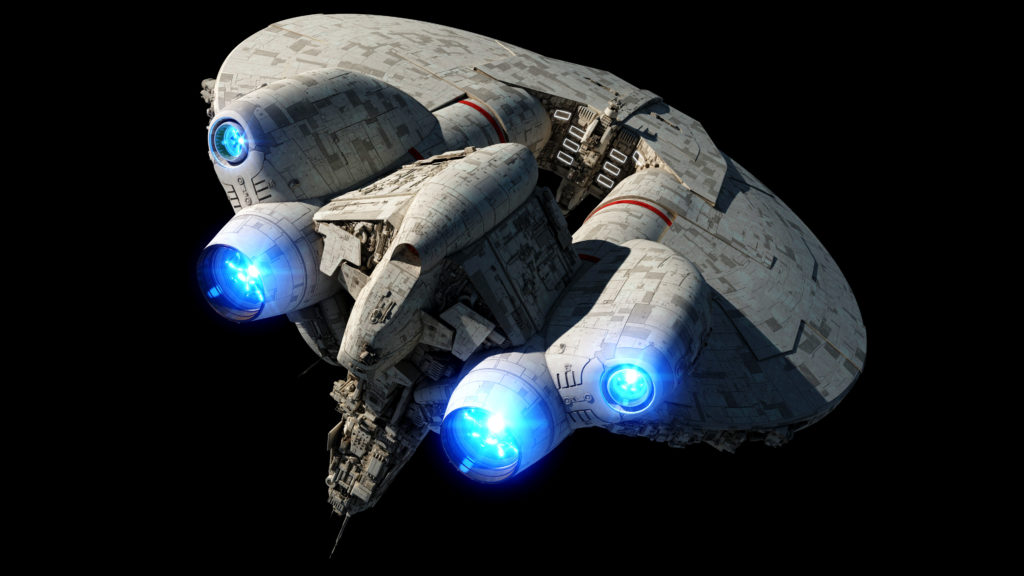 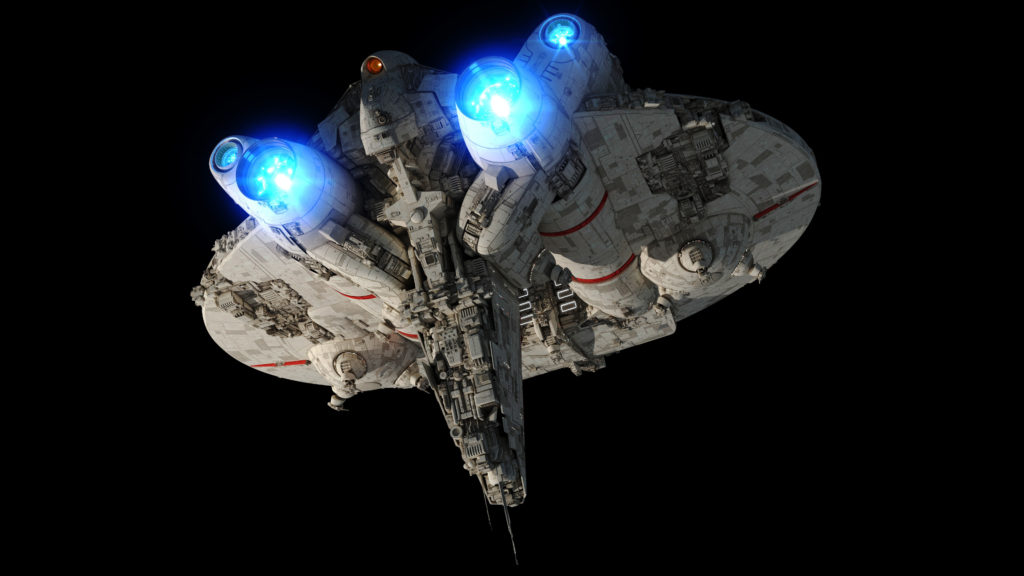 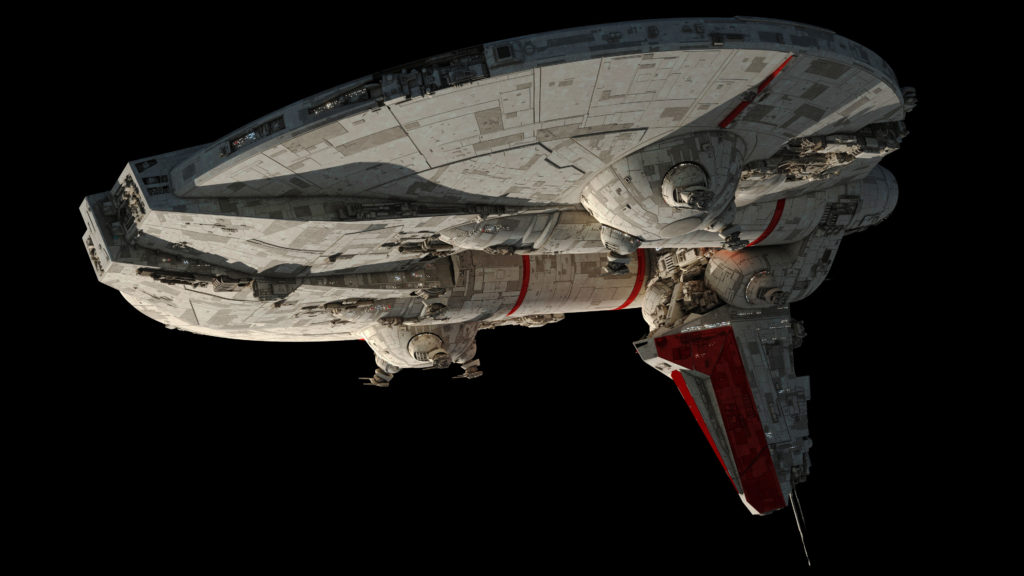 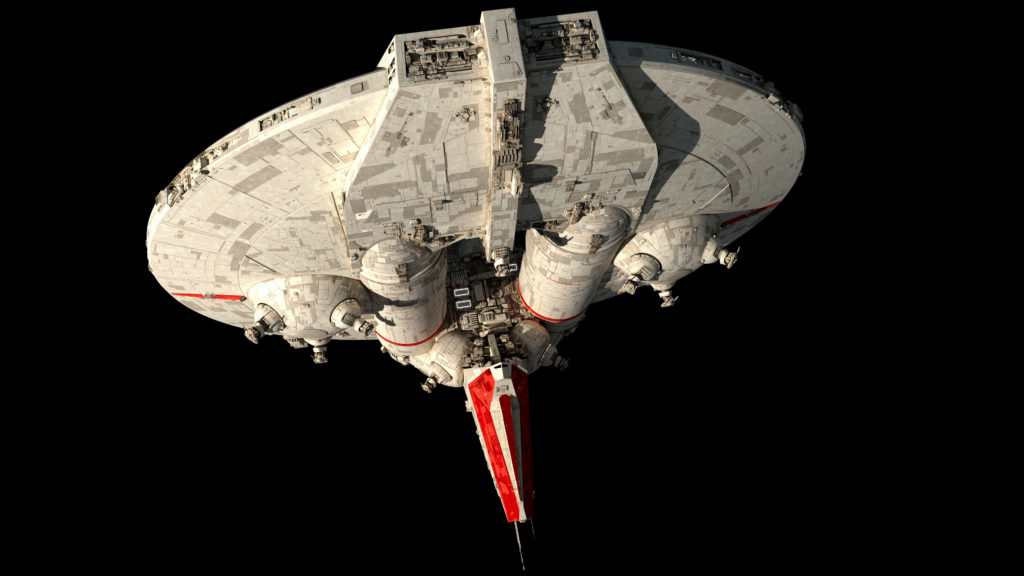 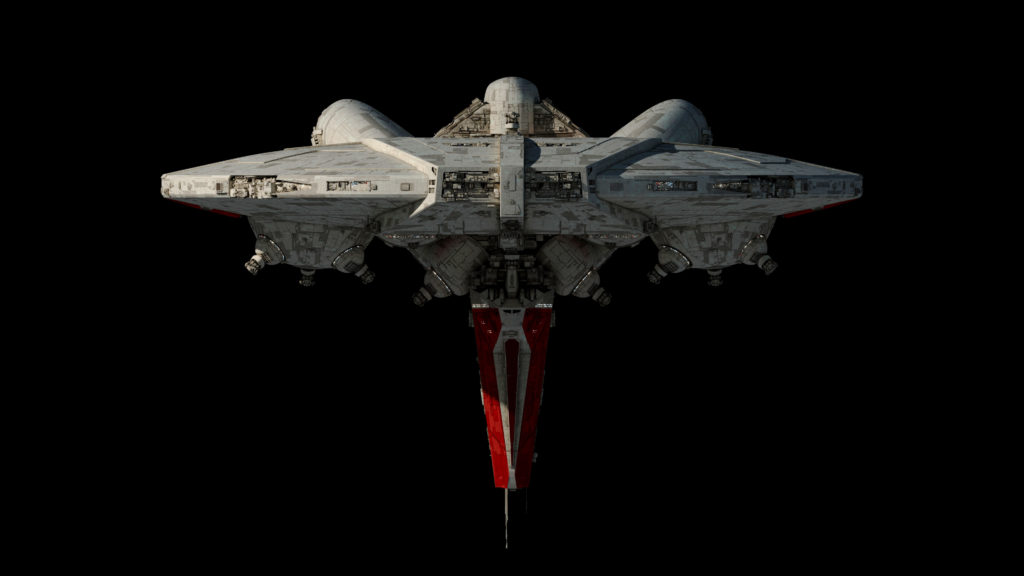 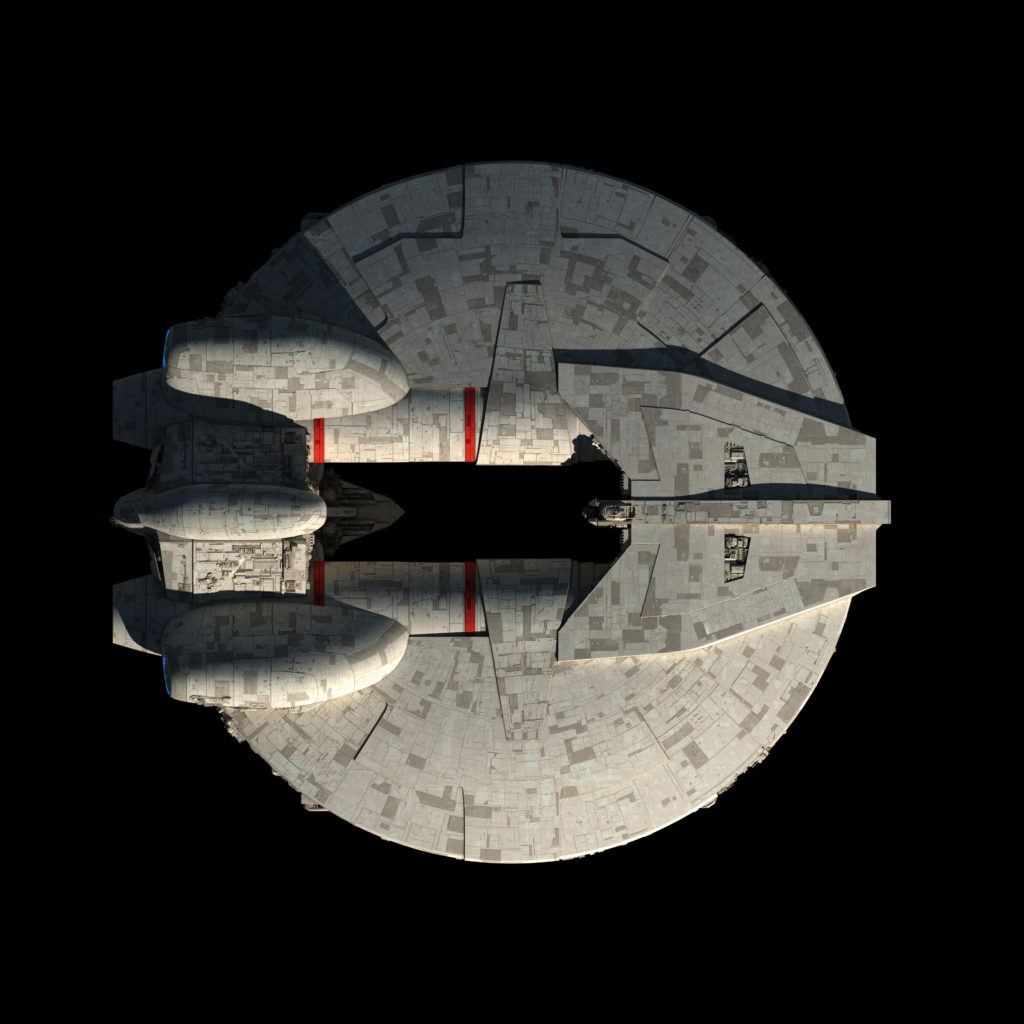 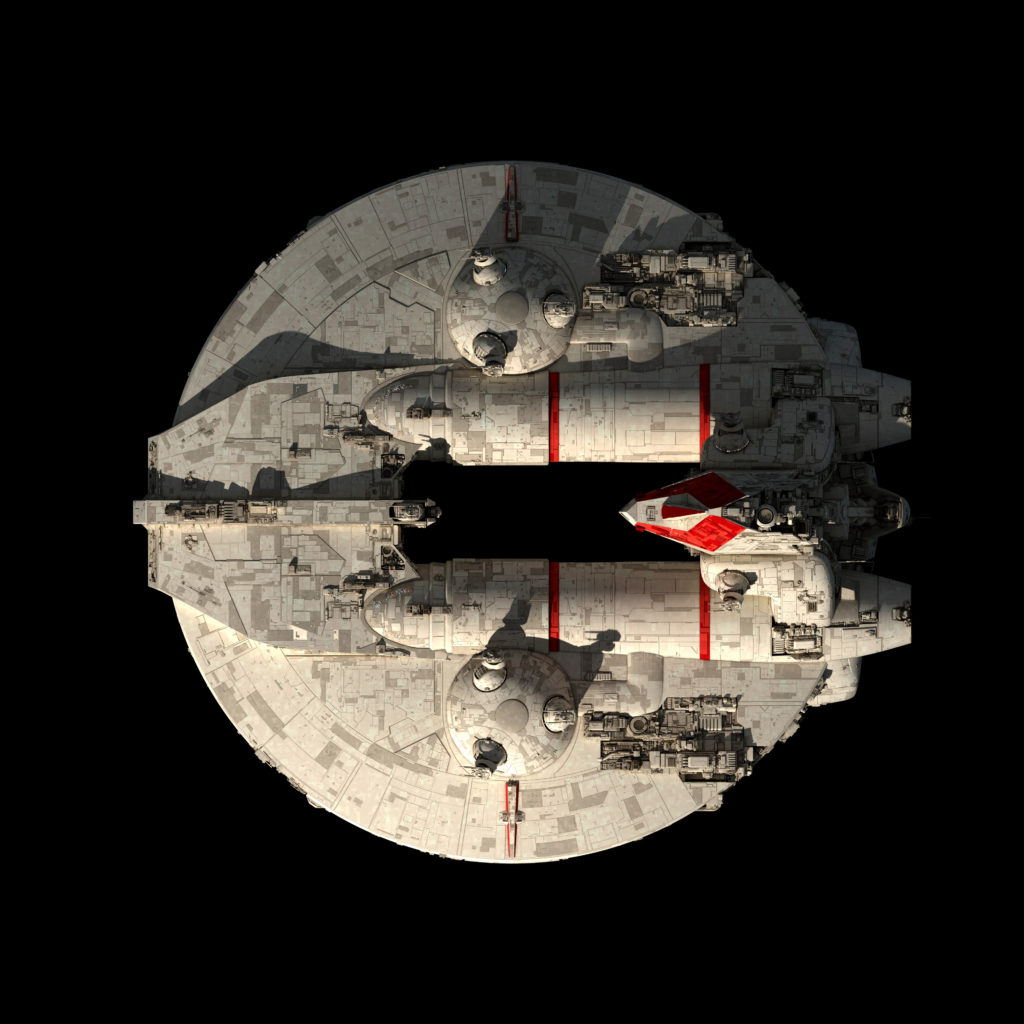 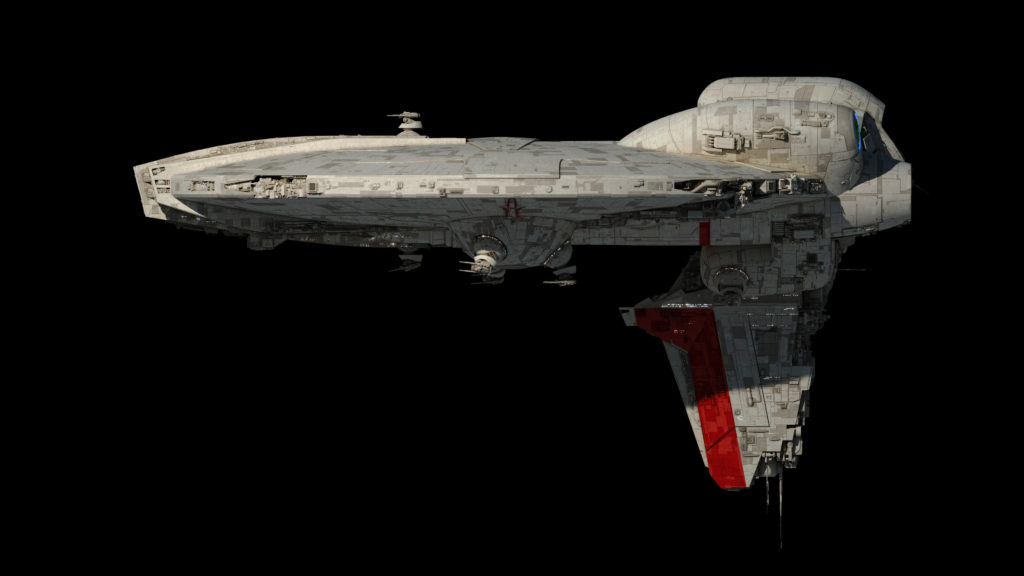 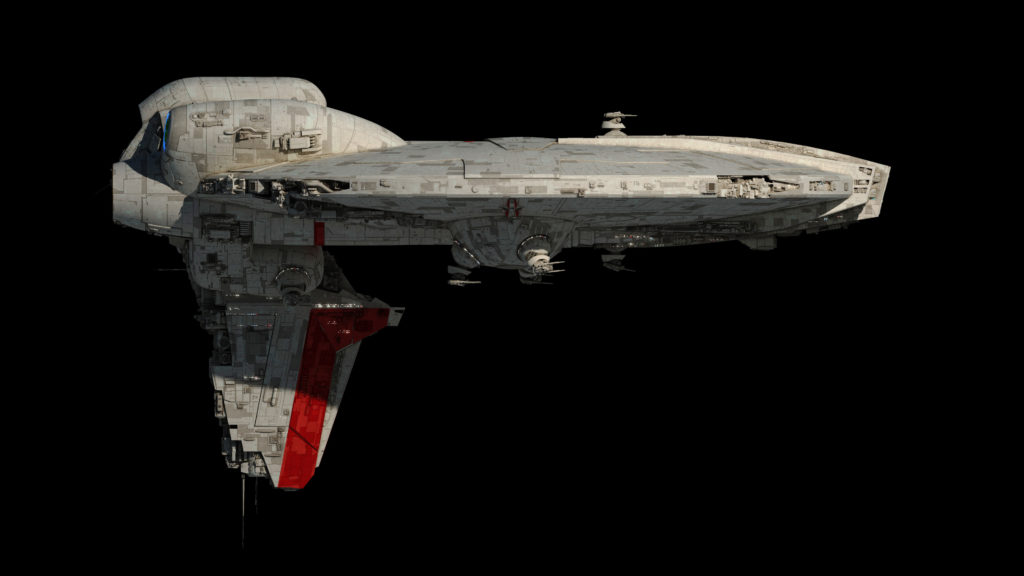 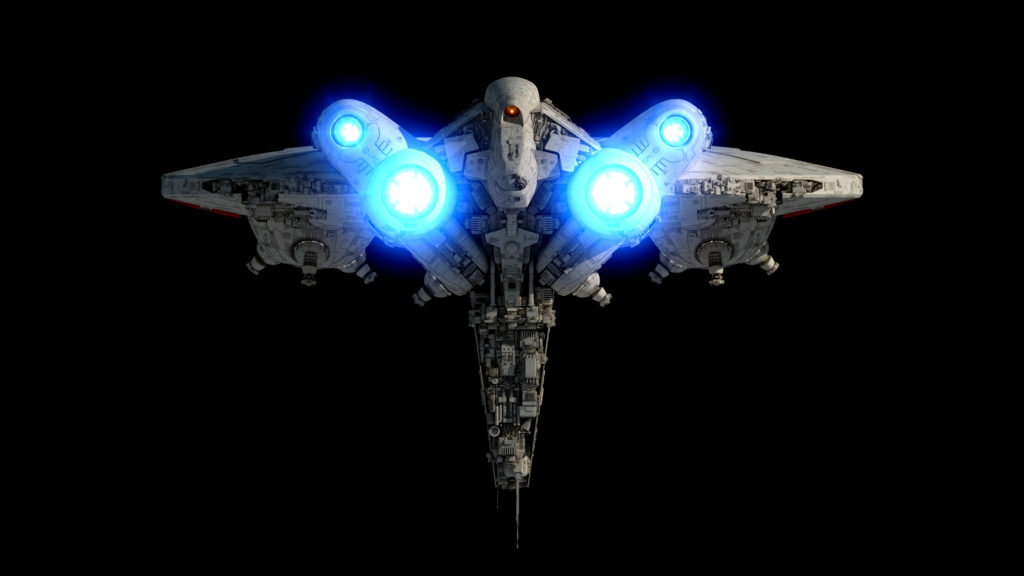 Your model looks amazing. I need you to do a Hammerhead now lol. Wish I could afford to commission you for it.

is that structure sticking out of the bottom of the ship the command deck? sorry i don’t know a lot about the old republic era, much less the ships that were a part of it.

More stuff like this would be awesome to see I mean I love the Imperial Navy ships, but they get kind of boring after a while.

Would you be willing to do the Centurion-class Battlecruiser from Kotor 2? Every picture I find of that does not show any weapon emplacements, which is very annoying.

Definitely my favorite SW saucer design, narrow as said field is. The understated paint job, inner-ring hangars & localized greeble distribution lend it no small degree of character. Still find myself curious about (a) the location/shape of its reactor-egg inside that dorsal/aft lump between the thrusters? and (b) that little orange ‘spotlight’ in the same area.

The stats on Wookiepedia.
http://starwars.wikia.com/wiki/Inexpugnable-class_tactical_command_ship

I’m guessing that the bridge is those black window looking things in the font of the tail.

Wait, I just noticed: the base of the turrets on the ventrial bulbs seems like its on a tracks. Do the turrets actually move or are they stationary and those grates are just heat sinks?

In fact, most of the ventral gun have the “tracks” at the base too…

Did you model the light turbolasers and point defense lasers as well? For now I can only count 10 dual turbolaser turrets, which seem to be very underwhelming for such a large vessel. Nonetheless, it is an outstanding model and it is really nice to see you do more non-empire ships!

Light and point defense weapons would be microscopic at this ship’s scale.

Ohoho, this is beautiful! I was wondering if you have finished this given the time since last WIP.
Btw, Fractal, I have been meaning to ask, those “shield” globes for ISD and other Imperial ships, do you place them to be most effective as shield generators as the current Canon want them to be, or did you consider their use as primarily as sensor globes as indicated by Legends as well?

So Fractal what is your thoughts on the First Order’s TIE/sf (Special Forces) fighter that can carry two pilots back to back and a duel heavy laser turret underneath the cockpit?

I’m not Fractal, but I would think having a turret with a firing arc limited by the wings is pretty stupid.

Seconded on the turret’s limited utility. Plus, while warhead launchers may not be *that* hard to pack on a stock/ln frame, all those other systems & supposed engine upgrades with no fuselage alteration besides those wonky-looking rotator cuffs?

This is very true, especially if the thing is boasted to “not entirely rely on solar panels” then the question would be where is the reactor.

If I remember correctly, those “wonky-looking rotator cuffs” are supposed to be banks of super-capacitors. I think it was TFA ICS which stated that (I can’t be sure as I don’t have it with me). The super-capacitors are charged from the ship/base, giving longer range/higher energy combat capacity, but not much of an increase in independence. If their super-capacitors are good enough, it could work for what they want.
In defence of the turret, I suspect the point of it was just to put a sting in the TIE/sf’s tail that would catch out unwary NR pilots, like the tail guns on the early B-52s. It’s a large expense for a marginal gain, but (again, according to TFA ICS) the First Order actually value their pilots’ lives and skills.

If they are indeed capacitors, I guess it will serve well as an alternative to having an expansive reactor in place. That said, I just remembered that Sequel Era is supposed to be after a time of “technology miniaturization” so who knows how much things are crammed into that shell. In regards to the turret, if rear defense is needed, a simple backward facing blaster/laser cannon would suffice it instead of a full 360 turret that can only have a total of (guesstimating here) 90 degrees of firing arc….

@Blue
Ah, so that’s the cuffs’ rationale. I’d still go with a semi-streamlined ‘trunk’ & fuselage extension ala the X1/Avenger/Inquisitor variants, but those were apparently designed with notably different priorities (longer-range ops vs. quick surge capacity) than the /sf anyway.

@Phantom
I was under the impression that ‘solar panels’ actually serve as radiators…but at any rate, TIEs have always been ludicrously miniaturized aside from the bomber/shuttle variants. I suppose the capacitor cuffs make sense as an economical/rapid means of augmenting the /ln frame. Anyhow, gotta second you on aft-arc gun(s) making slightly more sense on ships with that much wing in the way, unless the /sf spends *lots* of time strafing things where the extra lasers make a difference.

For the whole radiator vs solar panel thing, the radiator theory was suggested because a solar-powered starfighter is just physical impossible. You can stick a much sola

-sorry- …r panel to a rocket, it will never be able to overcome gravity, which TIEs do on a regular basis. Plus it would raise some questions on how the fighters are supposed to be refueled/recharged whenever they’re in a ship’s hangars.

@gorkmalork The radiator vs solar panel is almost as persistent as the ISD’s shields vs sensor globe debate, and I too want them to imagine them as a radiator, since their supposed predecessor, the Eta-2, has them as radiators. Additionally, if they were indeed solar panel, one would question as to where they would draw power from in the middle of interstellar void.
@Valoren indeed, but we all know SW tend to bend a logic every now and then 😛

There is some awesome artwork featuring this ship, by the way: 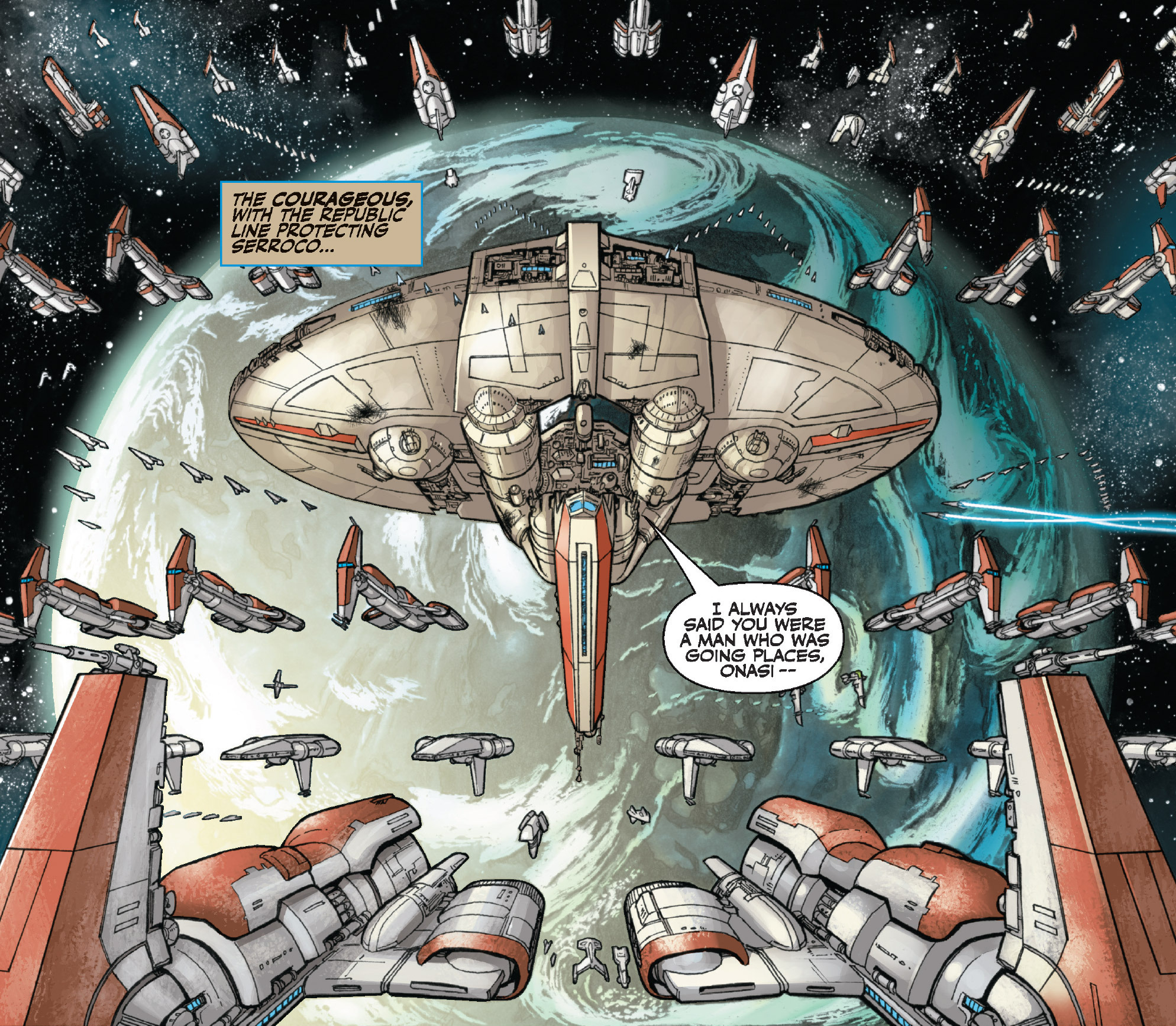 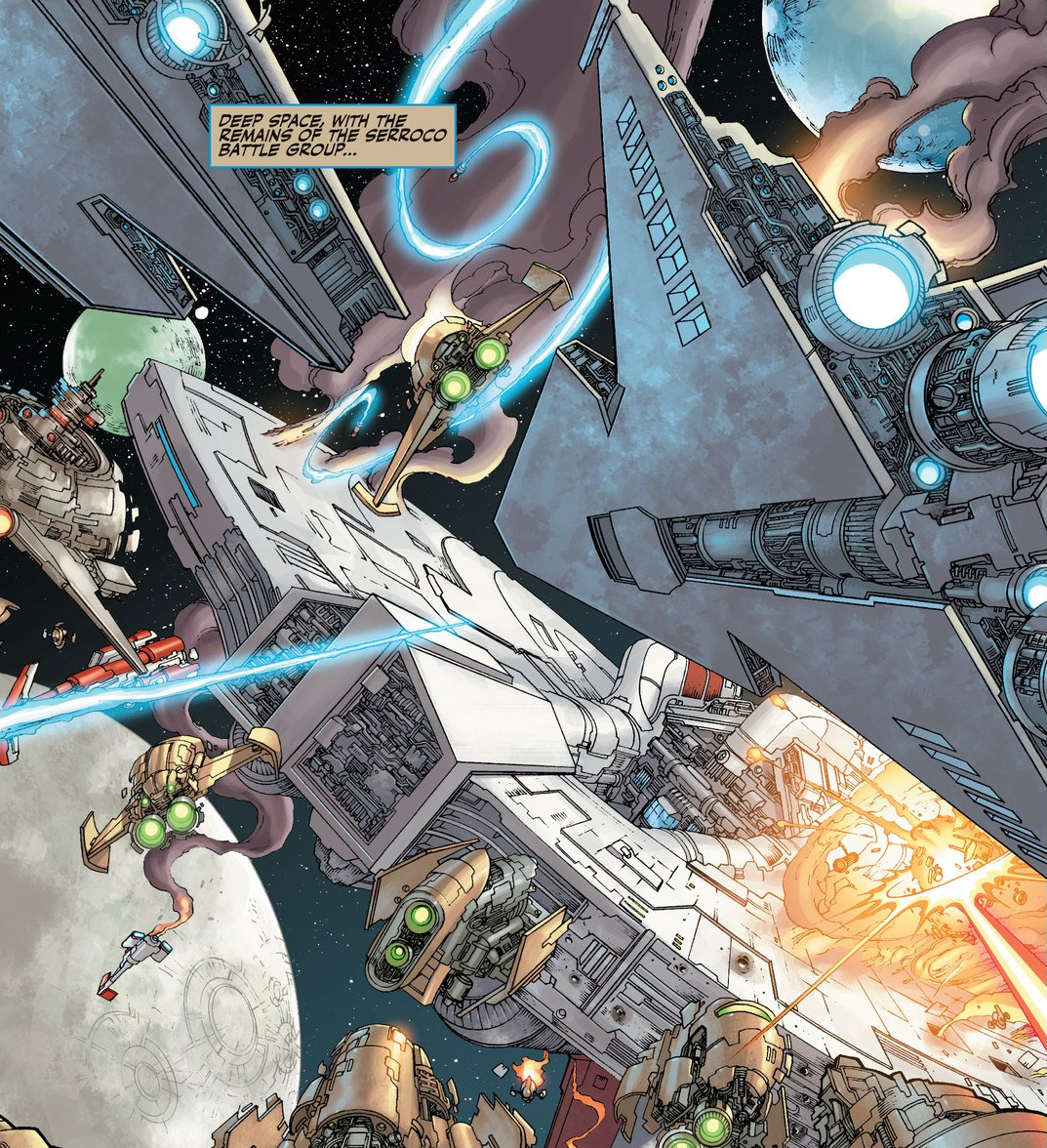 I have never really been a fan of this ship. But Fractal’s design, I like! I personally think he can take anything from Star Wars (and perhaps Sci-fi as a whole) and make it look amazing!

Is there a bridge on this thing? I can’t see it.

On the vertical spine, below the main hull. At the forward-most point on that spine, there are two great big windows. I wager that’s the bridge. I never knew where the bridge was on this ship until I saw that today.

I thought that was the bridge. Good thing it’s hard to see; because if I can’t see it, neither can enemy forces shooting at it.

Dunno how often capital craft get the opportunity to cherry-pick each others’ components at non-Cinematic Spitting Distance(C) ranges anyway.

Although both are real words.

True – but I don’t think we got to see it from a whole bunch different angles, the way we do most of his ships.

wonder how big this is?

Do you have numbers in mind concerning it’s carrying capacity ? I guess way more than a thousand fighters, considering its 11 hangar bays.

no guns on the top?

It does look quite unprotected on the dorsal surface except for that one central (heavy?) TL turret. However, all its ventral batteries makes this excellent for bombardment.

Seems to be the same ‘bridge & alpha arc on one plane’ philosophy we see on destroyers & a few cruisers, albeit inverted. Since (a) not all capital craft have the power budget for wall-to-wall main guns & (b) not much in vacuum to stop an SW ship from just orienting WRT priority targets…

Isn’t that much bigger than it is canonically? The hammerhead is 300m and the inexpugnable is only like 3 times a hammerhead length.

Plans for other KOTOR era ships? I’d love to see you do the Valor-Class from SWTOR, or those unnamed Frigates from the comics (they’re in the background above Serroco, there’s a model of them floating around out there for Empire at War/Stellaris modders).

The Valor-class cruiser would be awesome to see.

So those turbolasers what caliber are they like around 100-200 teratons?

Ooh, shit. I’d forgotten all about this. Really great model, though. The lighting and different color scheme from the Imperial ships you usually do make it really stand out to me.

One of the strangest Ships in SW – it stand out even among KOTOR republic ships.

Do you have plans for Sith Harrower SD?

He already made it years ago
https://fractalsponge.net/wp/wp-content/uploads/2015/12/sithbc7.jpg

True – but I don’t think we got to see it from a whole bunch of different angles, the way we do most of his ships.

(sorry, clicked “post” instead of “reply” – so it ended up at the top. Here’s second version).

I’d love to see a finished version of the MC90 Defiance that Fractal began a few years ago.