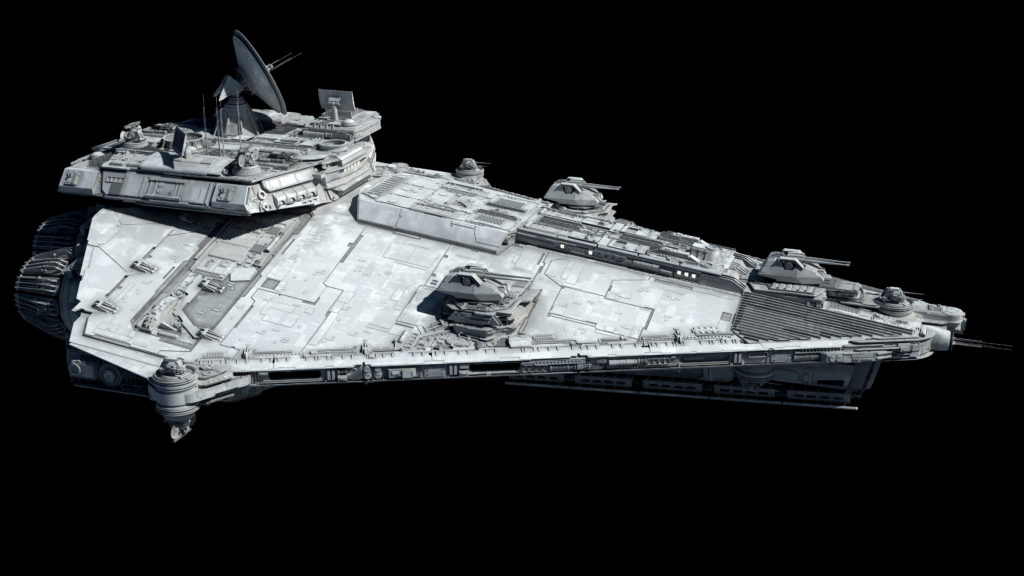 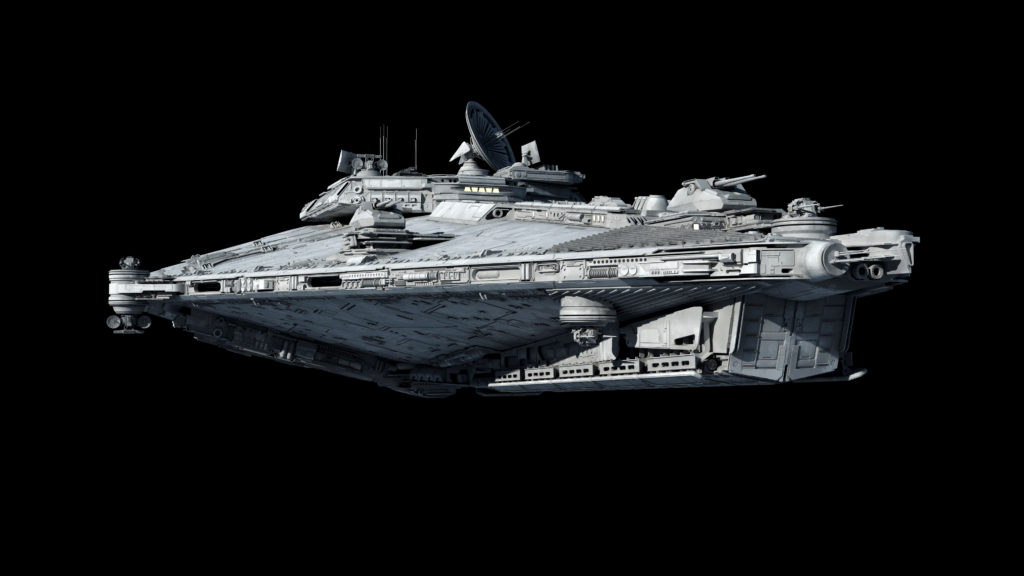 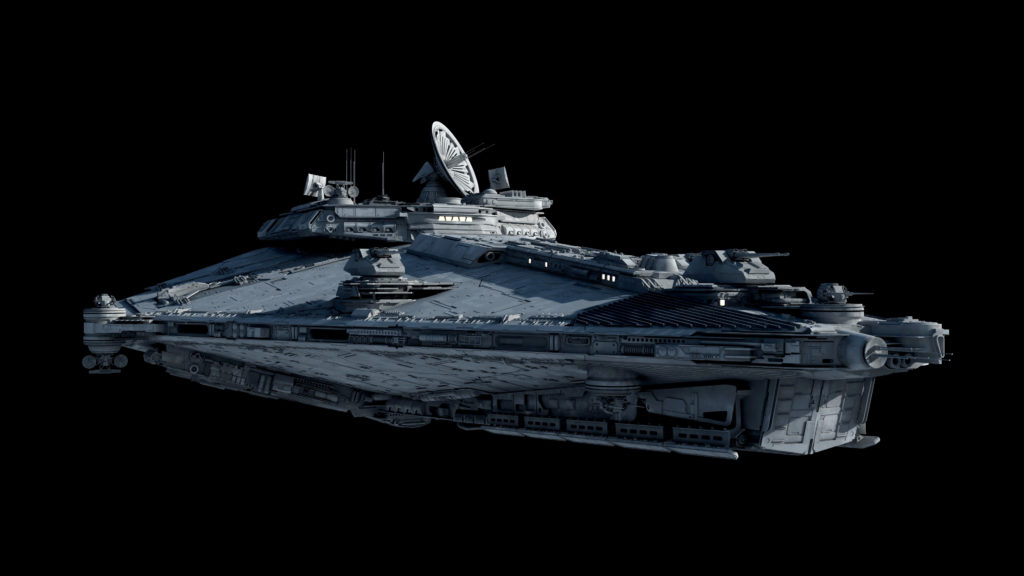 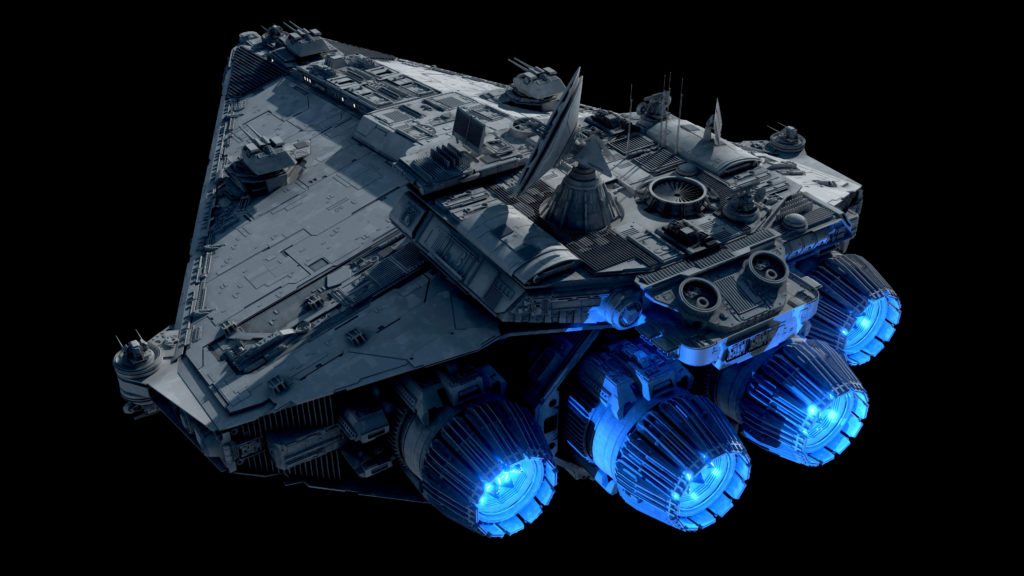 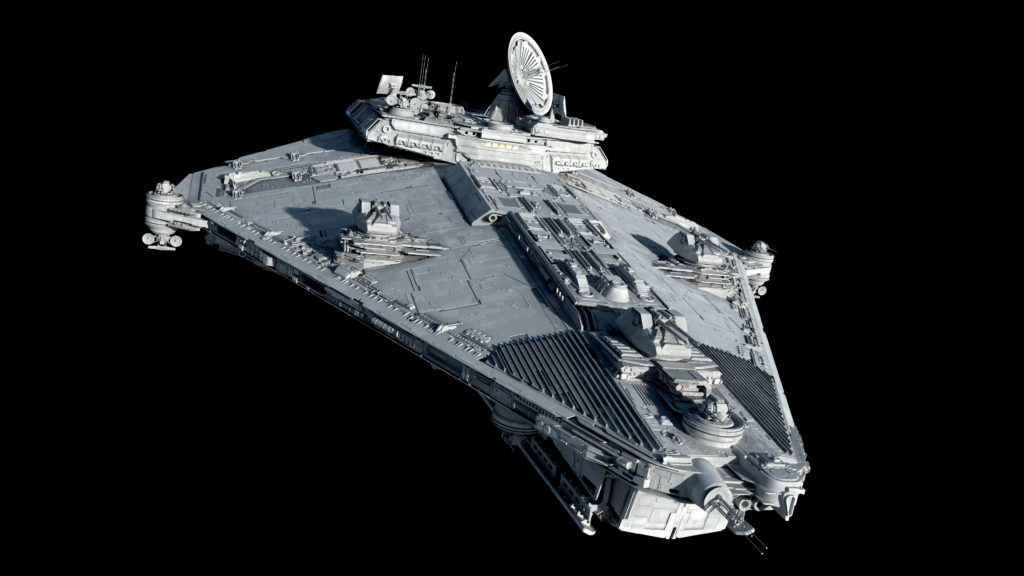 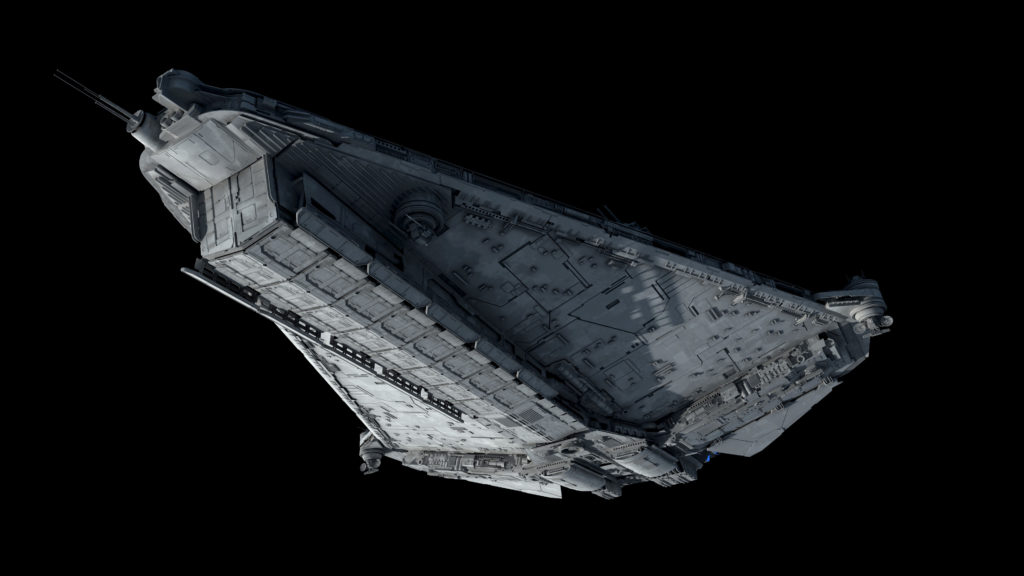 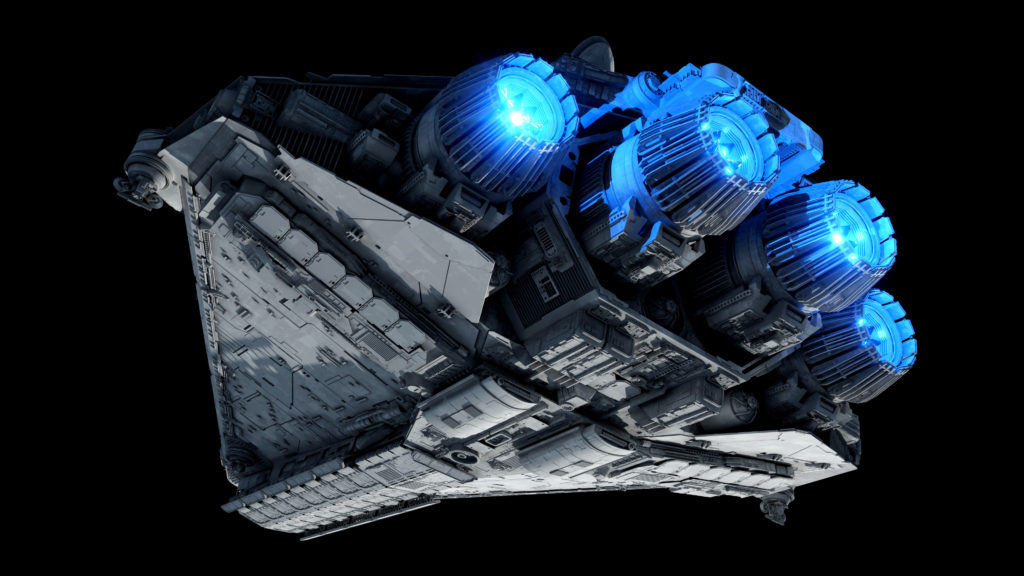 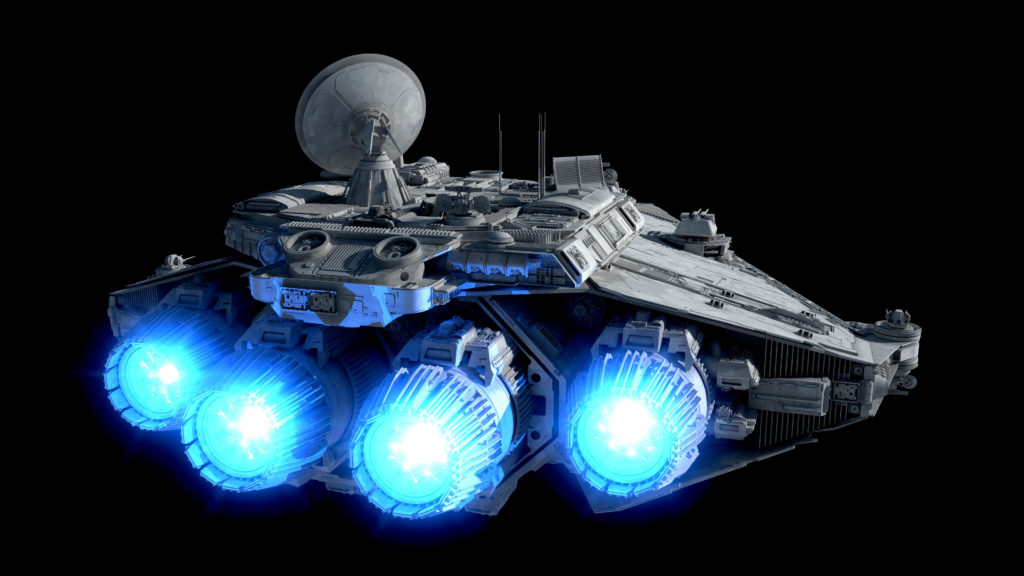 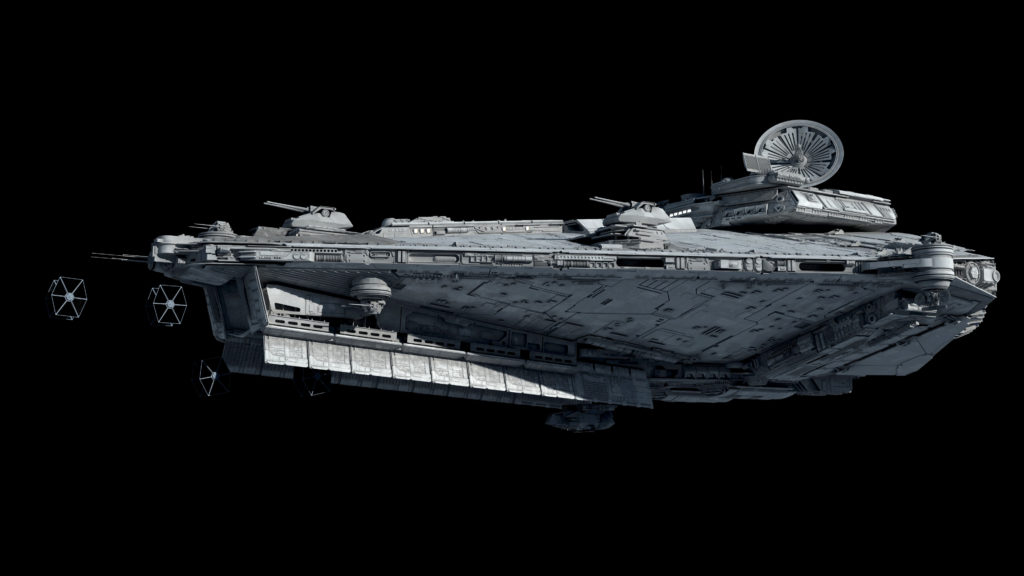 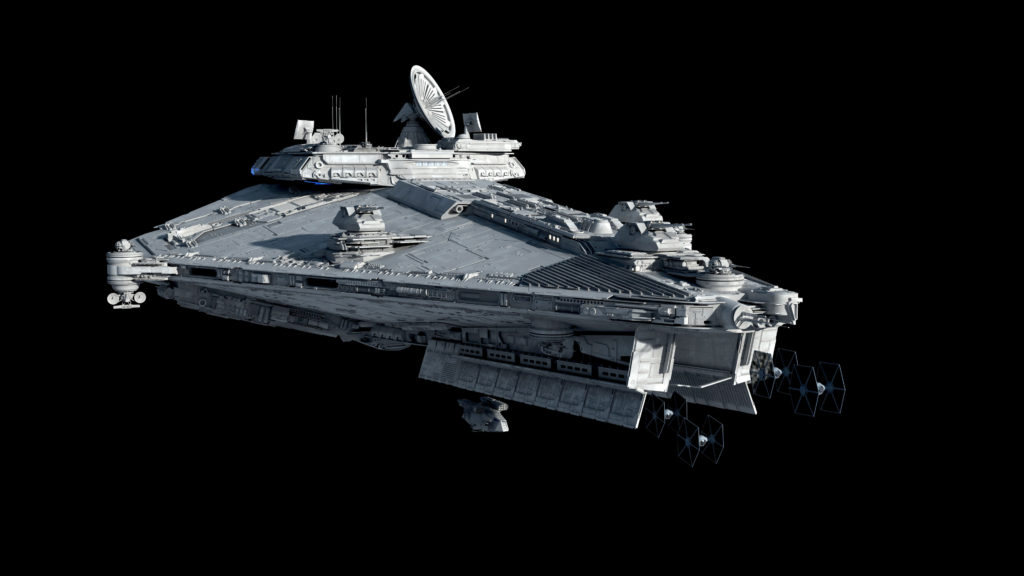 I always love this ship. For me personaly I considerated this ship as a pocket star destroyer.

This is an odd question and I sort of know the answer but can this ship land on a surface? Also is it 12 TIE’s only or 12 TIE’s and a Small transport?

They are 8 TIE fighters and missile gunship

what model gunship would it typically carry

Following the destruction of the Death Star and the ascendancy of the Fleet Faction and the ensuing boom in naval construction orders, it was recognised that the aging Arquitens class Light Cruiser was showing its age and it was growing increasingly expensive to keep the older vessels refitted and in service.
Wishing to do away with one of the last reminders of the Jedi, the decision was made to replace the older ship and replace it with a new modern and most importantly, Imperial design. KDY, the original builder of the Arquitens won the contract for a light cruiser or frigate and with the NEP (Naval Expansion Program) well under way the KDY team got to work on the replacement for the venerable cruiser.

Unlike the Aiwha, which was small, cheap and quickly produced, or the more specialized Lancer II escort ship, the design that would emerge from Kuat wasn’t very small nor was it that cheap, but it ticked all the Admiralty’s boxes.

At 255 meters the new design was shorter than the Arquitens, which saw it classified as a frigate, but its typical KDY wedge shape saw some crew calling it a ‘Pocket Star Destroyer’ although it lacked its larger kin’s exposed bridge tower and was a rather squat ship although some crew also called it ‘muscular and aggressive looking’.
With a Class 2 Hyperdrive the new design would match standard fleet speeds, but its powerful engines gave the ship a considerable amount of thrust making it able to respond to hostile warships manoeuvres or react quickly to a change in situations and the KDY team also made very sure it could outrun the Corellian Corvette and Gunship designs.

The designs armament was simple but effective with three dual mounted Medium turbo lasers giving the ship its main punch and these were well sighted, allowing it to bring all three to bare when closing on a target.
Five twin light turbolasers in anti-fighter mounts protected the design against hostile fighters and could engage warships at shorter ranges whilst heavy shielding protected the well armoured hull.

The design also incorporated powerful long-range sensors and communications equipment, which would let the ships track targets long before she was detected. Most impressively though was the fighter compliment. Harkening back to the Venator class Star Destroyer, the KDY designers included a ventral hangar for a dozen TIE series fighters. In extremis she could carry up to 18, but this would mean not being able to carry her four shuttles, two of which were usually Sentinel class landing ships for the detachment of 100 Stormtroopers onboard.

Packing all this into a fairly small hull did mean that the ship was very spartan with hot bunking being a necessity (two crew sharing one bed, one goes on duty, the other goes off and goes into their shared bed). Indeed, the only people with single occupancy rooms were the Captain and XO, even the other Officers had to share quarters with most crew being in six-man bunks. To counter this the KDY designers gave the ship a powerful air filtration system and adequate stores for the crew during longer missions.

Operating first as the core of patrol groups and communication relay vessels (read spy ships) the new Vigil class Frigate became the scourge of pirates and several Rebel cells were destroyed in action by ships of this class. Several were captured by Rebels or salvaged after being critically damaged and were put back into service, although due to the shape of the hangar, Rebel crewed Vigils had to carry 8 fighters due to a lack of space and most Rebel Vigils could not maintain their crafts advanced sensors and electronics, replacing them with more commonly available off the shelf systems.

it just feels like this is the perfect ship to take over the Arquitens-class Light Cruiser place. it dosent have those expose engines and bridge

According to Wookiepedia, there should be nine gun turrets on this ship, but I can only find eight.
Is Wookiepedia wrong, has Fractalsponge made a mistake, or am I just missing a turret?

The design is correct, since it came before the Wookiepedia entry. 3 medium turbolaser twins, 5 twin light turbolaser turrets.

Gunna sound dumb, but I’m going to rebuild this in Minecraft. It’s something I do, and you’re builds are by far the best source of inspiration when it comes to Star Wars!
If you want to know what I’m talking about, just look up my name.

Not dumb at all actually, I support the idea

What is the list of armaments for this ship?

You probably already caught it but I just noticed there’s a clipping error under the bridge section in the last image–the light source is shining through.

A fantastic update for an already fantastic design. This beauty truly deserved a 4k remake.

My favorite of your corvette designs. I hope they make this canon again. It would’ve been really cool to see one of these over Scarif, or alongside the Arquitens-class ships in Rebels.

I didn’t realize that space under the bow was a hangar. That’s cool. I’d assumed that was just a cargo bay for storing stuff confiscated off smugglers…

Huh I just notice that there a docking bay at the back of the bridge but I wonder why it is there?
It is right here near the big antenna: https://fractalsponge.net/wp/wp-content/uploads/2018/01/vigil85.jpg

Probably so people could get on and off the ship… 😉

Right that make scent I did not think that.
By away the Kontos also have one.

how long would this guy be? complement? arms?

In the last image, the second fighter’s panel looks opaque. Is it meant to look that way? Fantastic work as always; the deployment of fighters and dropships looks superb.

I’d bet $5 the render wasn’t quite finished, or it just didn’t complete in that area. Happens to me all the time, especially where there’s big lighting contrasts and generally close to a deadline.

It’s reflecting the bright hull panels behind and to the left. 😀

Howie Day? THAT Howard Day who created the legendary Legacy class? If true I simply need to ask you if there’s a chance to see an up to date version of that beauty. I love that ship but from today’s point of view it lacks some details.

could we get a direct front view

Now I’m confused. In the old version the hangar was slanted upwards but in this case it appears to be parallel with the trenches.

You know I wonder how do you pronounce Vigil?

Look it up in a dictionary.
vijəl

How fast is this ship in relation to others?

IIRC, this one was intended to run down light transports & fellow corvettes like the original trilogy’s CR90. Not the fastest thing Fractal’s whipped up, but handily capable of keeping up with the Falcon or most fighters at sublight. No clue WRT hyperdrive, though.

I imagine it would make an effective convoy escort, too. Fighters and light guns to deal with Rebel fighters, and heavy guns for the corvettes.

Point in full there-they certainly strike me as faster (and possibly cheaper) all-rounders than a Nebulon or Imp-refitted Arquitens. Suppose said factors would also make ’em choice prizes for the odd cell of Rebel hijackers (or mutineers).

Seconded. I imagine this filling a role like our LCS was supposed to, with a modular hangar deck to support various compatible TIE designs, StromTrooper transports (perhaps with special operations teams on board), maybe a bunch of the modular missile pods as seen on other craft in the foremost compartment (that opens outward) to increase its anti-air or anti-ship capabilities as needed. Maybe even hosting swarms of Imperial spy craft for drop-off in far flung regions. This is by far my favorite ship by far, thank you for this.