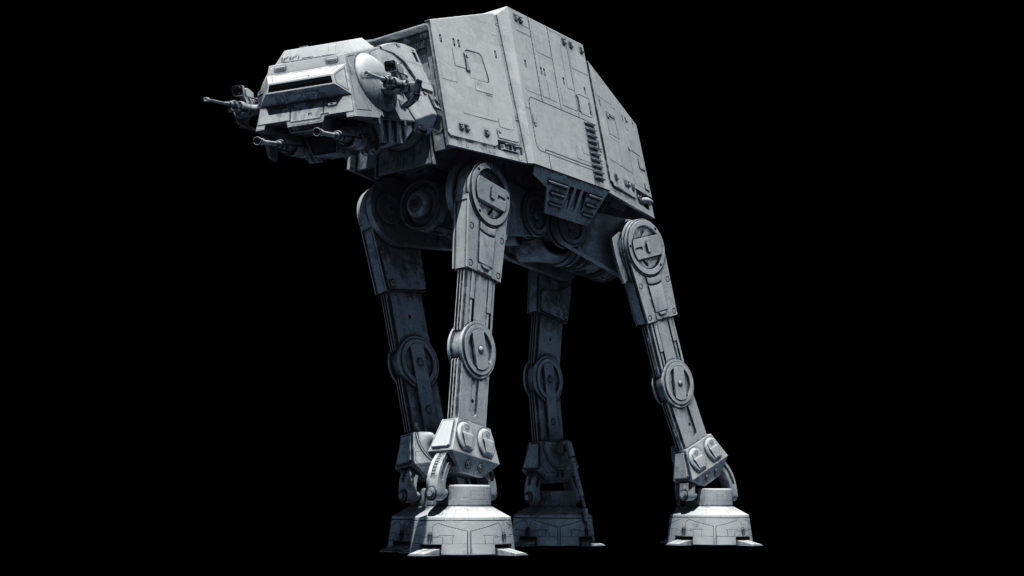 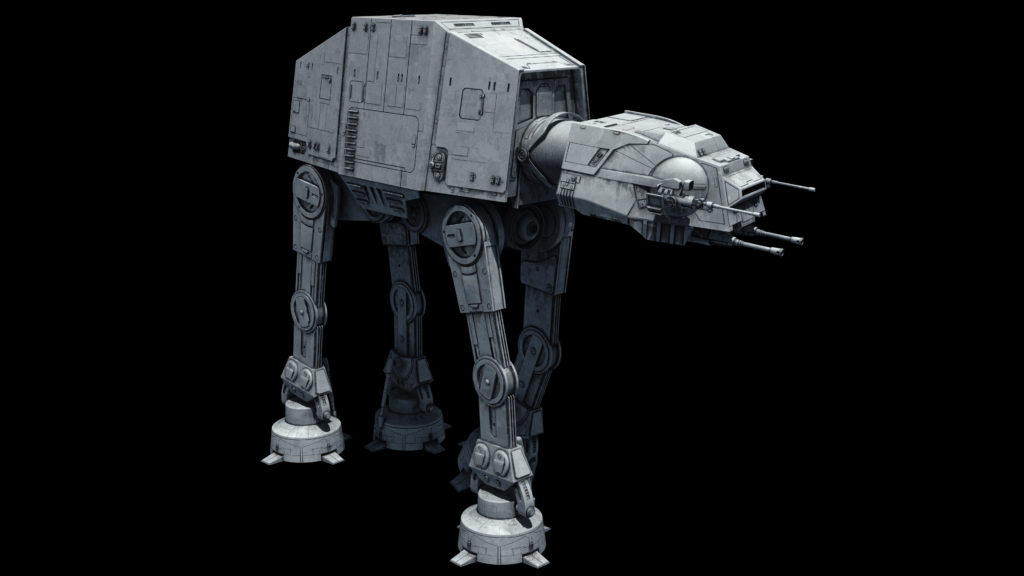 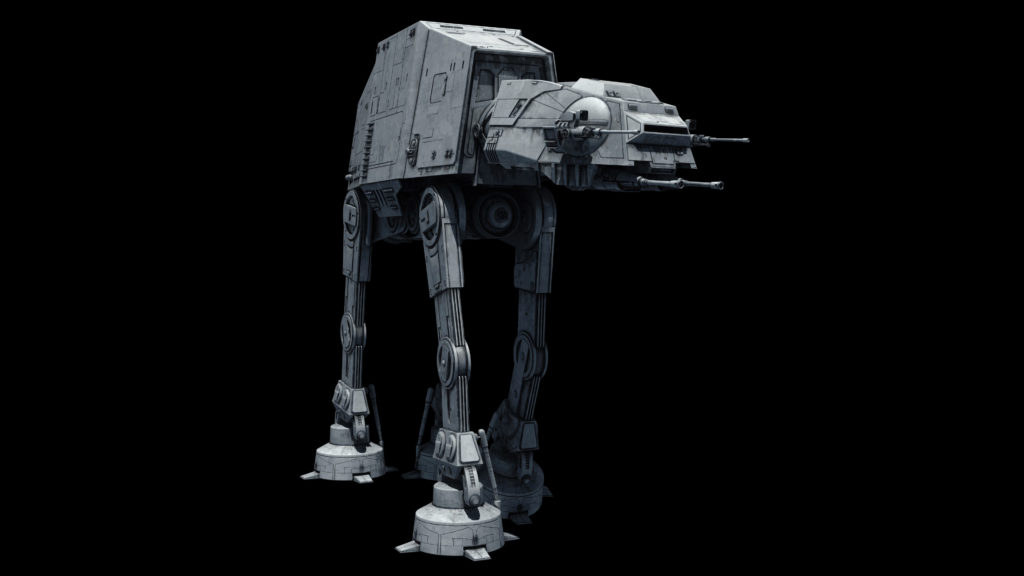 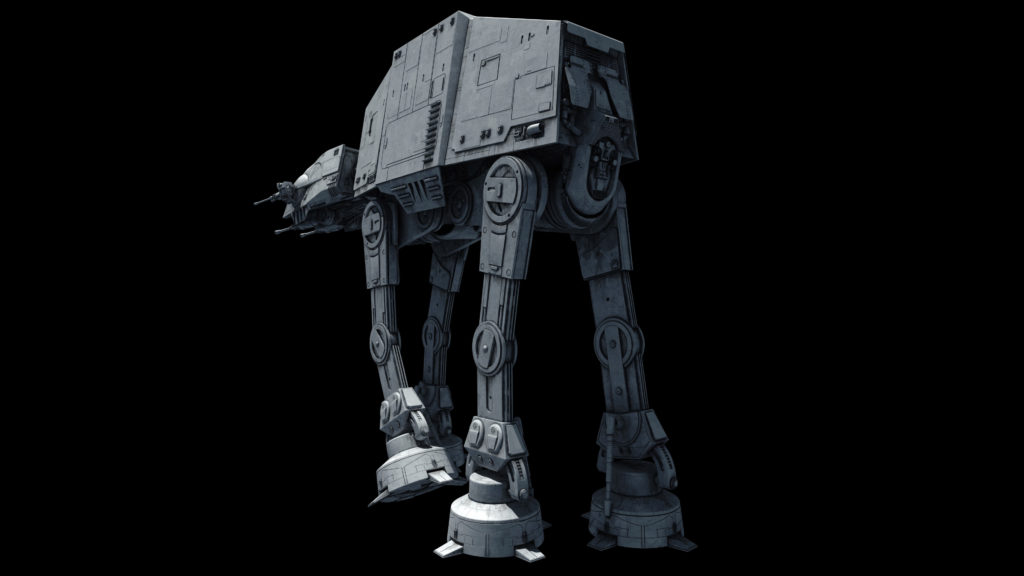 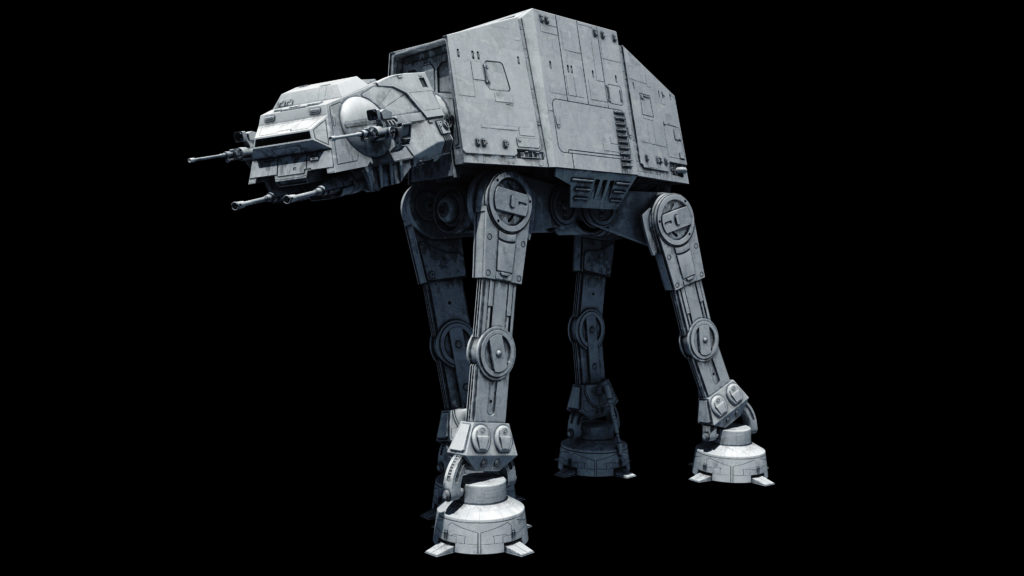 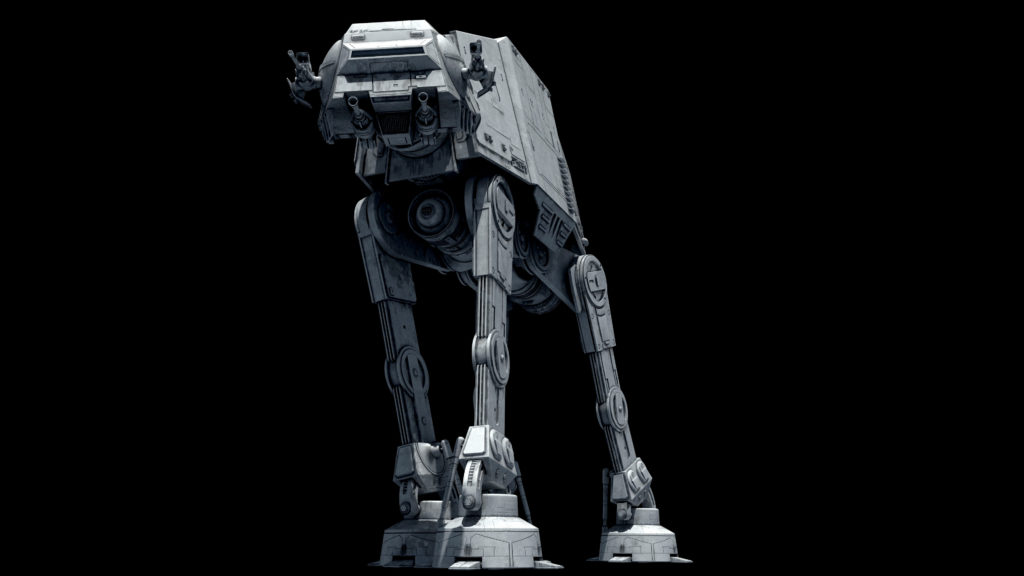 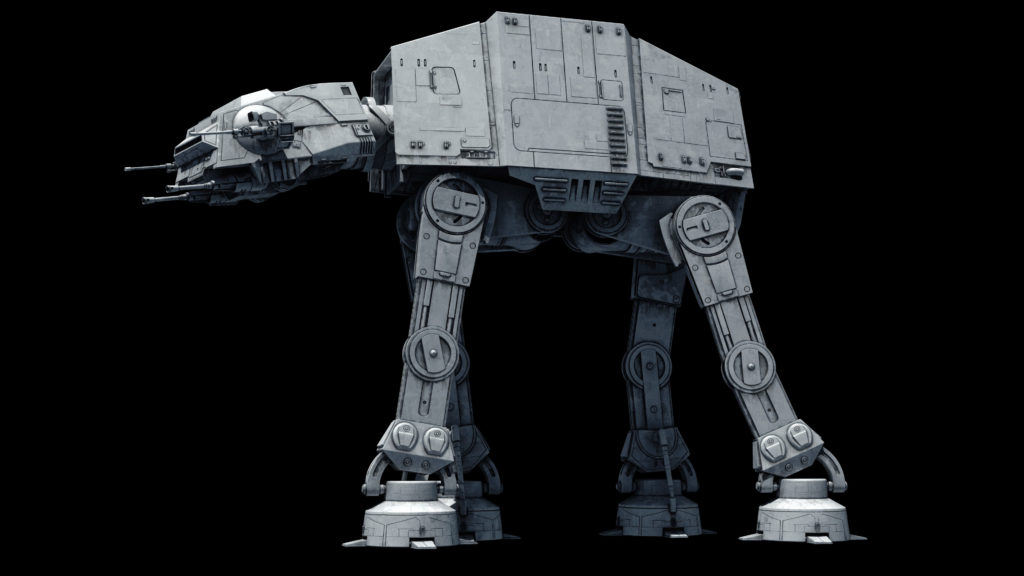 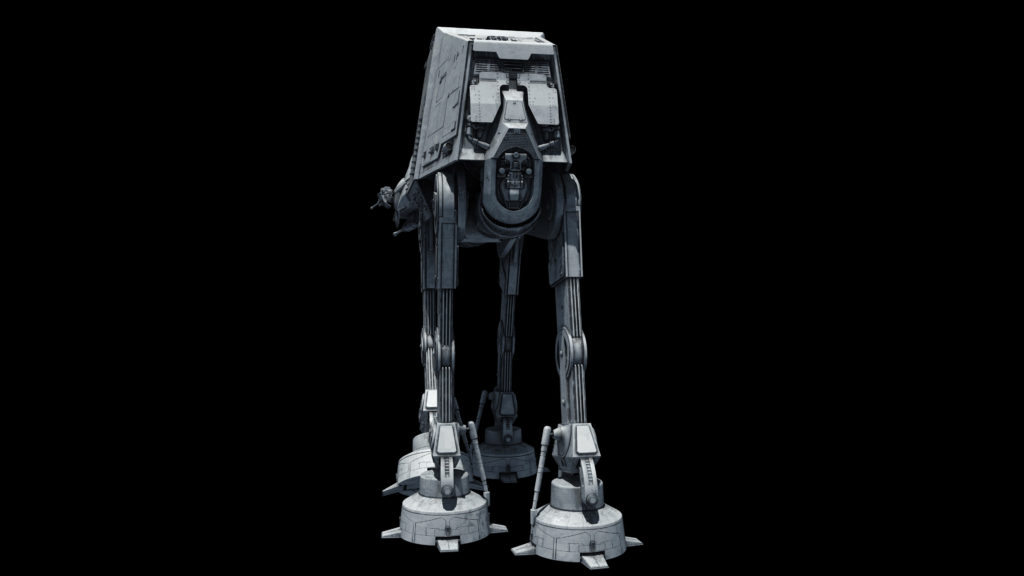 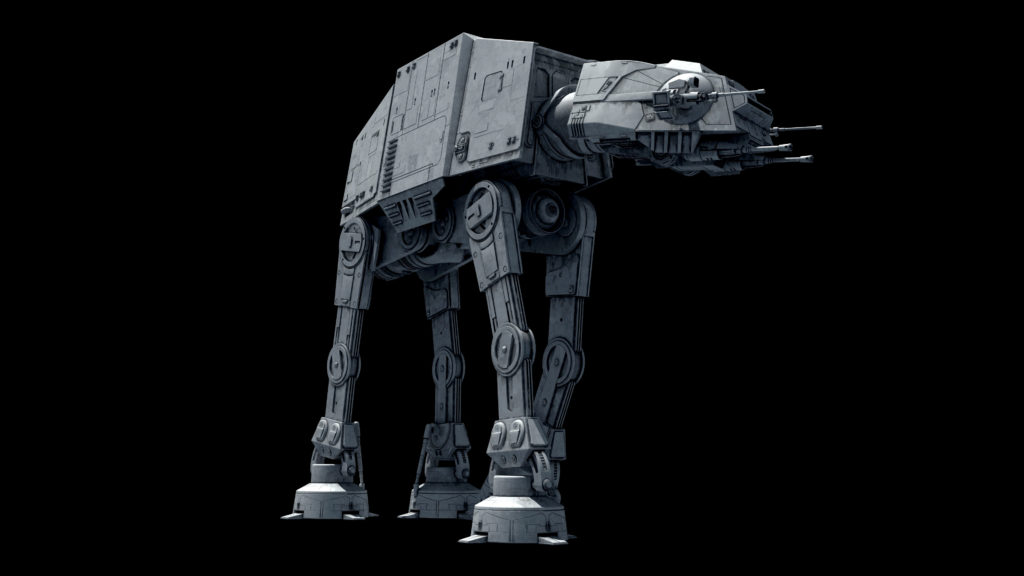 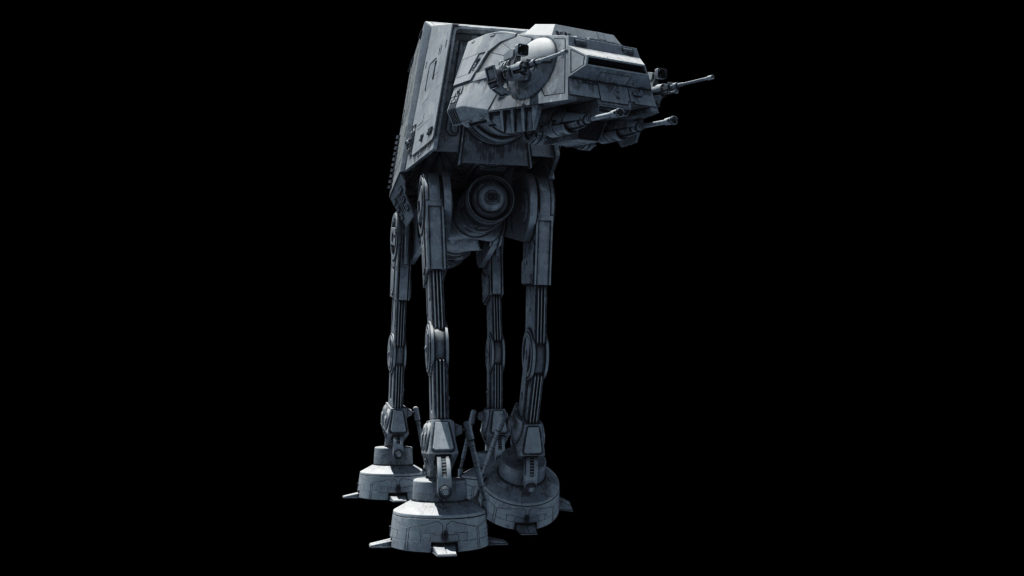 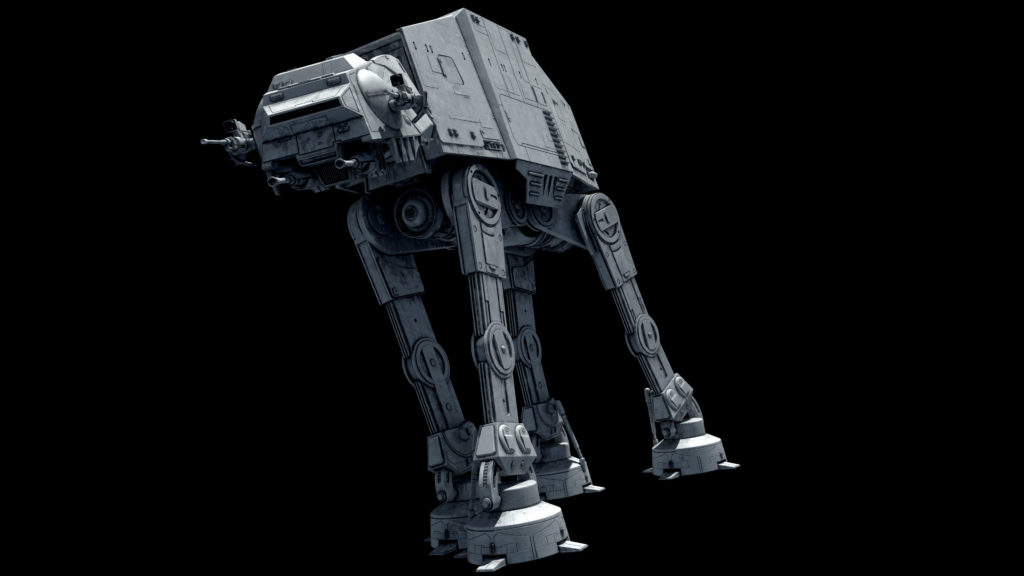 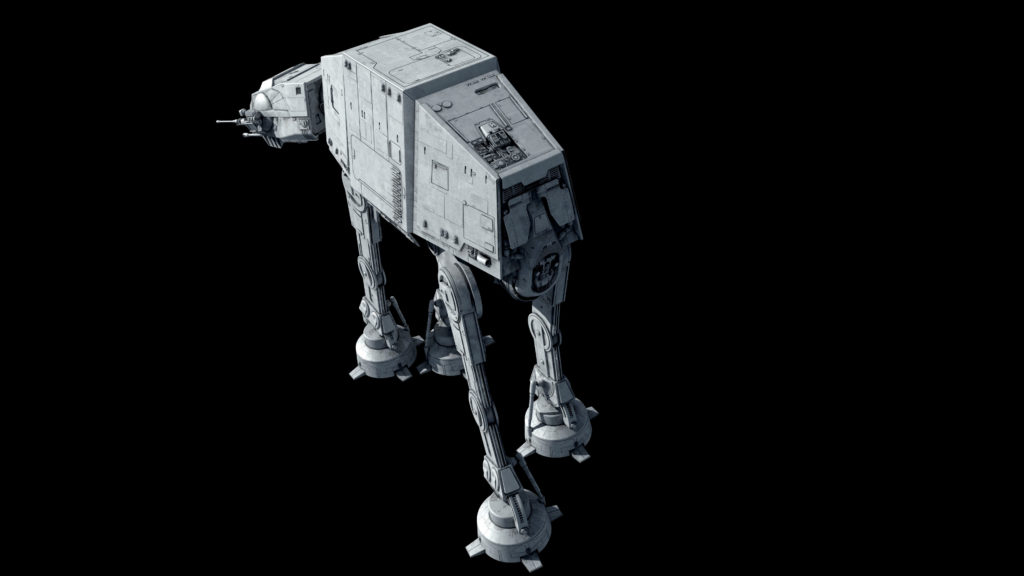 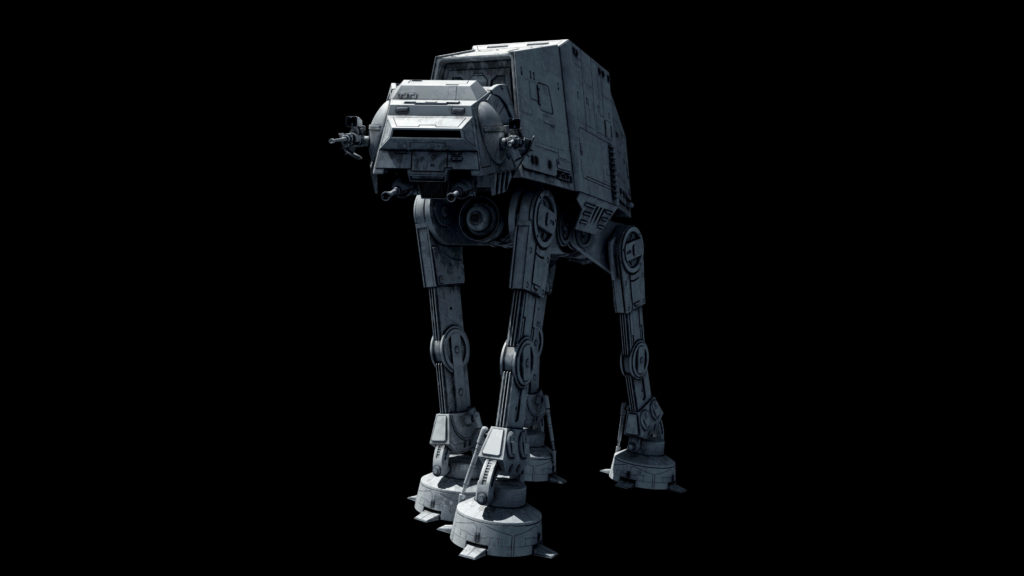 Could you possibly make some clone era models? Such as the AT-TE, or Venator class star destroyers?

I wonder Fractal can the AT-AT’s side cannons be replace with both duel anti-personal blaster cannons, duel missile launchers or one of each like on the Broadsword or not?

Fill out the interior with larger power generator, slap on some ball turrets on the main body, and you will have a decent all-angle attack platform!

A TFA-style missile launcher might work on the dorsal center, albeit likely scaled down from the one we saw trying to whack Finn & Poe.

…or two retractable missile pod either side of the main body, like on the juggernaut.

That *might* demand more transport-role tradeoff than a dorsal turret, but seems likely to compensate with magazine space.

My favourite Imperial Walker! Though I do love the AT-TE too.

Keep up the great work!

Would would you say is the highest caliber shot this could tank? More than a few laser cannons or just a few Mass Driver shots?

Depends on if you think it has shields. I wouldn’t be surprised if it did to be honest.

Hmm…we see the cargo variant get chewed up by X-wing lasers (right?) & a couple long bursts of U-wing ion-doorgunner fire in R1, but ESB’s AT-ATs tank T-47 guns & seemingly every field-support piece available to Echo Base’s ground forces. Plus, there’s a brief exchange in Rebels where one walker absorbs fire from the Ghost (which seems broadly Falcon-comparable) without telling damage (it wobbles for a second). I think there’s a case for AT-AT shields roughly rated against a couple bursts of heavy laserfire, but not LTL & up (or a fighter-yield proton torp, as one Rogue Squadron book mentioned).

Garrison cargo variant vehicles may not have had the same kit as AT-ATs. But there’s not much proof one way or another, but it’s certainly more than possible – personal shields are doable after all.

The -ACT’s huge midsection cutout (and that tensor deficiency around the joints) would indeed seem to compromise active defenses & structural resilience, though at least their heads seem decently armored. Maybe that R1 missile would’ve been better-aimed at the thing’s ventral generator(?). At any rate, still a safer ride than the AT-ST (one thing TLJ actually *improved*).

The initial Rogue One X-Wing laser hit was a side-on shot that looks like it might have hit the vulnerable neck collar region, and even then both X-Wings were allocated to hit the same walker instead of spreading out their fire between that AT-ACT and its platoon mate, which might suggest a low probability of kill even with a side-attack profile.

The AT-ACT that violently crumples up in the next shot is already notably ionized by the U-Wing before it takes a torpedo to the spot right below the cargo hold. Based on that, AT-AT protection seems roughly analogous to a modern MBT in having significant frontal protection perhaps able to withstand peer fire, but fairly vulnerable side and bottom armor. With regard to shielding, perhaps shield generators are optional packages only installed when significant opposition is expected while less commonly present on garrison units, like reactive armor. That could explain any significant remaining discrepancies on AT-AT durability.

@Steve
Ah, that open-compartment -ACT took a torp hit? Between that and the double-teaming you point out, perhaps cargo walkers are *slightly* tougher than I initially presumed. I can buy most medium-to-heavy walkers requiring extra precision and/or saturation to kill with lasers (ditto for the ‘optional shield package’ thought). Still seems like the bigger models could use at least one dedicated PD mount (even if it does cut down on cinematic siege weaponry).

I would not be surprised if this had a shield, if someone more competent built it. And re-watching ESB it looks like they have shields. But the shields look inconsistent with how shields are portrayed in other movies and scenes.
Of course however, Luke states that the armor is too strong and when it falls, the thing just explodes after a few shots. So… maybe? Maybe only minimal shields covering the front.

Or the shock of the fall disabled the shield system?

But small flashes on the surface with no visible damage after are entirely consistent with shield explosions in the rest of TESB at least.

Shielded vehicles at that height would be a skosh more innately vulnerable to gravity-based widget disruption than anything in a vacuum (barring combat or extreme navigational kriffups, natch).

Of course! That’s why it blew up in one hit after it fell, the shields were down! I have been flummoxed by this since I was a kid, but that makes perfect sense.

I thought it was pretty clear that it blew up because the fall exposed the unarmored rubber neck collar section, which could easily be penetrated by a T-47.

I like to think some active protection failed. It’s sorta stupid to have such a critical failure point be dependent on geometry alone – it’s not like some guy with a shoulder-held missile launcher couldn’t ever get a bead on the neck. It also means the armor wouldn’t have to be so magical. Move the magic to magic force fields! Better for SoD for me, but your mileage may vary.

Seems a bit funny one neck hit would produce such a blast. Walker designers might wanna consider relocating some fuel lines…though I could’ve sworn that ‘splody shot was higher up the back.

Geometry is a point of failure for pretty much all land combat platforms. Excellent tanks like the Leopard 2 and Abrams have been knocked out in droves in Syria and Yemen because their less-experienced operators exposed their flanks/rear to ATGM fire which they would otherwise be protected from had the drivers angled the front of the tank towards the enemy.

The neck of an AT-AT is proportionately far smaller a weak point than the side of an Abrams MBT (parts of which only have 55mm of RHA equivalent protection against kinetic energy shells), making the Empire’s doctrine towards neck protection pretty reasonable, especially when AT-AT formations are commonly expected to operate in combined arms formations with SPAA walkers and other screening vehicles.

That being said, I’m not against an AT-AT having shields in some or maybe all circumstances.

Rewatched the scene, and just want to make a few interesting observations:

The two T-47s strafing the downed AT-AT make an approach run at treetop height, and while the first speeder’s laser blasts glance harmlessly off the cockpit armor, the second connects solidly on the neck at an angle where the penetrating bolts would go further into the main body.

Perhaps it isn’t fuel that’s being set off, but damaged capacitor banks for “Maximum Power” type heavy laser blasts. If the AT-AT was upright, there wouldn’t be any angle for an attacking speeder/fighter to be able to penetrate into the body of the walker.

At the same time, when the AT-AT trips on the wire, the rebel infantry actually rushes forward towards it, suggesting that they could exploit its fall with satchel charges and sticky bombs. Presumably the infantry assigned to Rebel strategic high command are well-trained professionals who know what they are up against, leading us to believe that maybe neck hits leading to catastrophic failure are rare and not to be counted on in battle. Blame the force for lucky strafes.

But what’s more likely – the Rebel infantry knows that the hypothetical shields fail when the walker falls like that (or their sensors tell them they failed when the walker fell)? or that the neck is intrinsically vulnerable to infantry fire in all circumstances? If the latter, they should be trying to get close to manage some shot that bypasses the armor coverage anyway, and walkers would be vulnerable to massed cluster munitions or the like penetrating the neck area.

And I agree that the capacitors going off are a very reasonable explanation for the scale of the boom.

Just rewatched this a dozen times and it looks like you’re right, it does hit right in the neck after ineffective fire on the head armor. I could have also sworn that the hits were higher on the armor as well, I wonder if that was changed from the original release, I’ll have to go digging for my old VHS tapes and see. Still, I think the idea that the AT-AT utilizes shields is compelling given that A) the neck is vulnerable even with combined arms and B) the artillery the insurgents deployed was likely designed to be effective against heavy armor, but we see it doing no physical damage. I guess the lesson here is that they needed more light attack vehicles and anti-aircraft protection, no insult intended to Gen. Veers.

I’m inclined to roll with the capacitor-hit explanation, but third Fractal & SpaceCoyote WRT AT-ATs sporting shields, inasmuch as (a) there’s all those ESB energy-weapon interaction flashes that don’t seem to even score the armor, and (b) said feature renders that neck issue fairly moot unless the walker’s being hit by serious firepower (or one space monk with a lightsaber & explosives). Vehicle shields might not stop grunts with satchel charges at close quarters, but presumably that’s why chicken walkers (or variants with extra PD coverage) exist. Incidentally, one Disneyboot comic does indeed depict several Y-wings wrecking an AT-AT’s day with cluster munitions…in an urban setting. Tim-berr!

Just thought of another point in favor of shields. If armor alone would make AT-AT frontal arcs truly invulnerable to anything smaller than LTL, it would probably be more optimal for rebel crew-served weapons to spray down the cockpits of every attacking walker with suppression fire in an effort to damage exposed sensors/optics and reduce the accuracy of the Imperials.

Instead, the rebel anti-armor weapon crews in the trenches continued to fire their P-towers at the lead AT-AT’s legs even after it was demonstrated that initial hits inflicted no visible damage. Perhaps if Veers hadn’t eliminated their gun positions so quickly, sustained fire might have achieved local burnthrough after several minutes of repeated hits.

It’s nice when I don’t have to type things and they just show up anyway. Agreed.

Everyone’s favorite super-heavy IFV is back and better than ever. Any chance of a version with the ventral bay doors open and a platoon of mechanized stormtroopers rappelling out?

I absolutely love your work. Thanks to you, the Bellator-class Battlecruiser is my favorite ship in the Star Wars universe. Do you think you could do more Imperial Corvettes? I haven’t seen a lot of those on this website.

Just to let anyone know Fractal say this AT-AT he made is 28 meters in length not 20 meters don’t let the Legends & Canon lore stats fool you they got the maths wrong which Fractal cares about and calculated right.

Although the height is quite difficult to calculate even for Fractal because the AT-AT’s legs are not straighten out properly but the best he got is around 22.5-24 meters.

Fractal does calculate the size right, which is weird because he has made a bunch of official renderings for legends ships.

Right now the model is scaled (with vertical legs) at 28 x 9.8 x 22.5m, but there is still some play in the hip suspension. SWTC estimates 22.6+/-0.8m, so I figure it’s pretty safe. With bent legs for maximum compactness I think you could get it down to <20m clear height.

I guess the 9.8 meters is width right?

Sorting the numbers by size and looking at the picture again should answer that question.