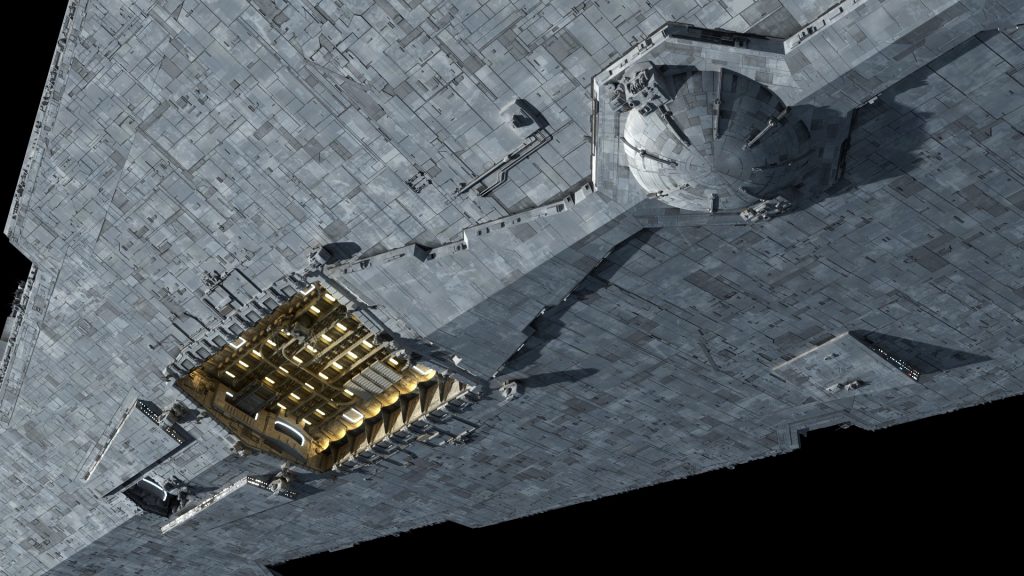 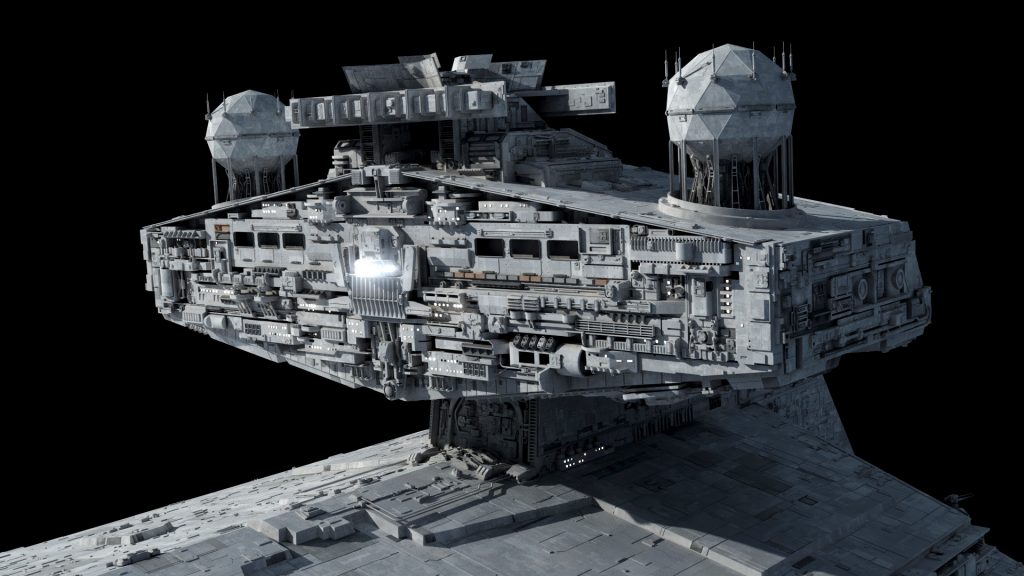 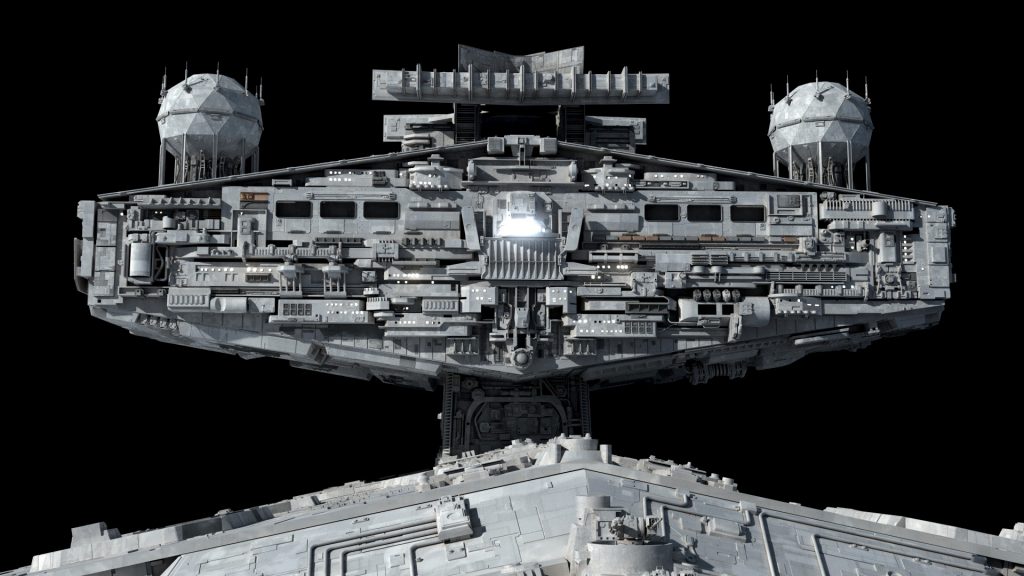 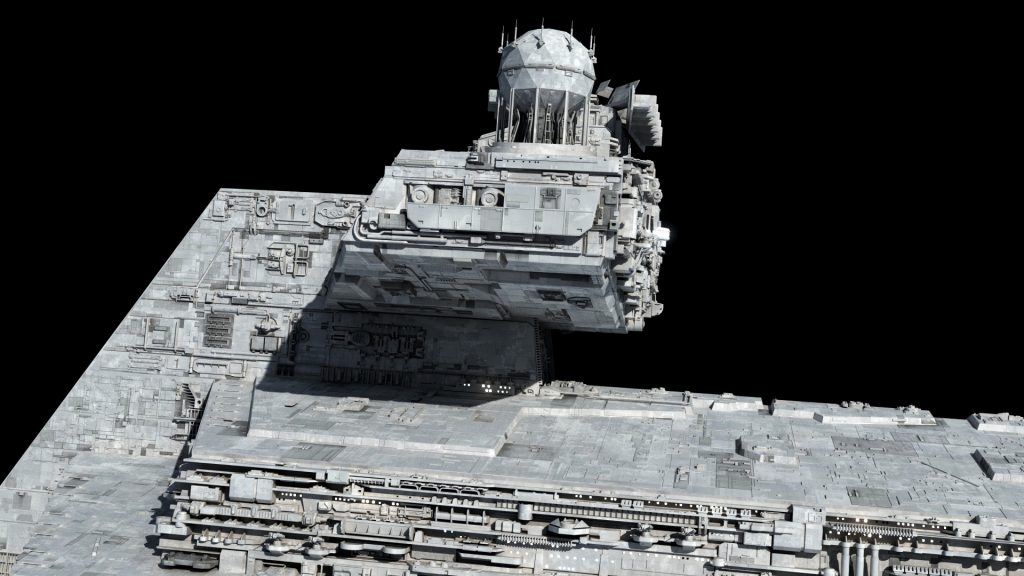 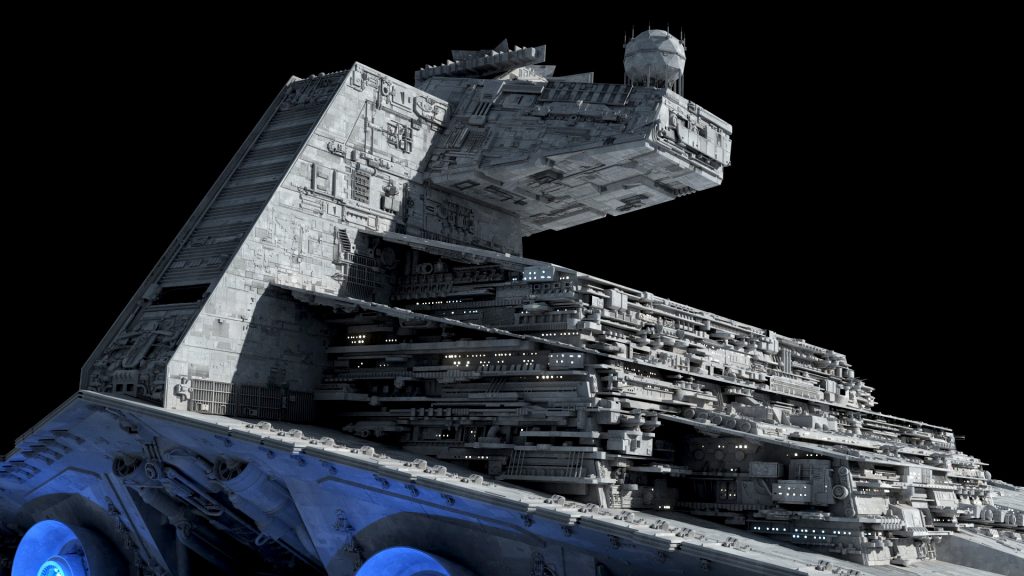 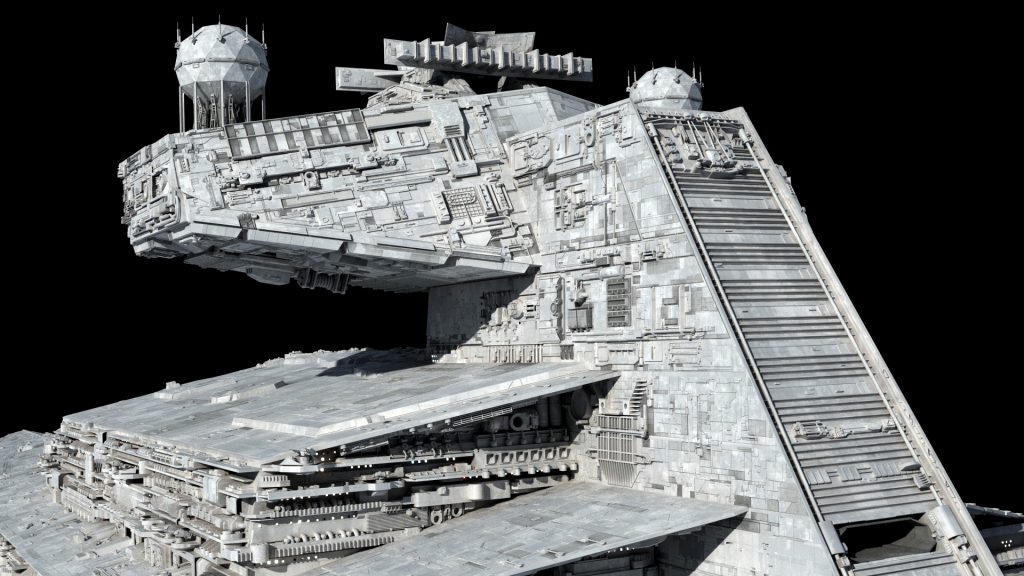 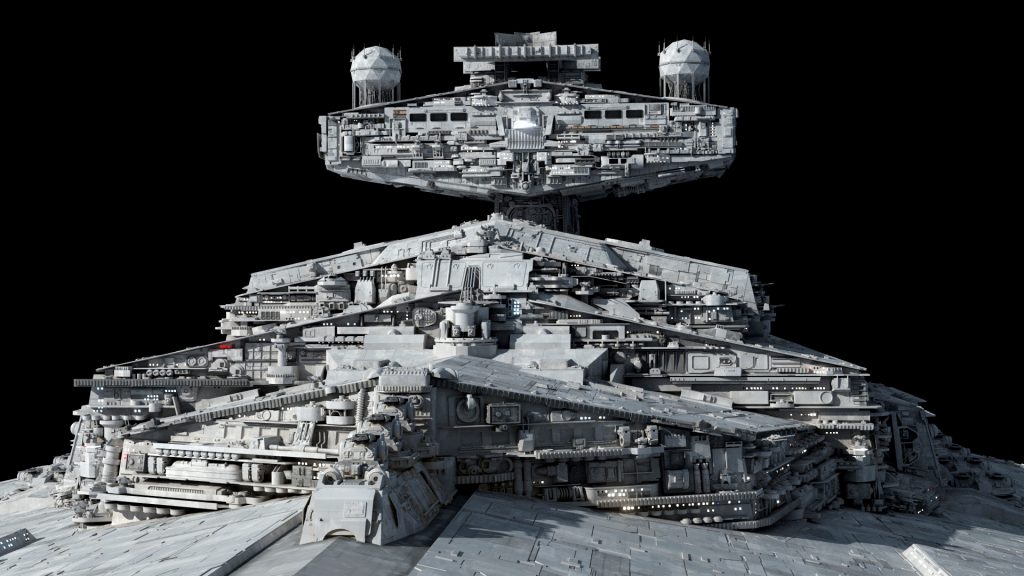 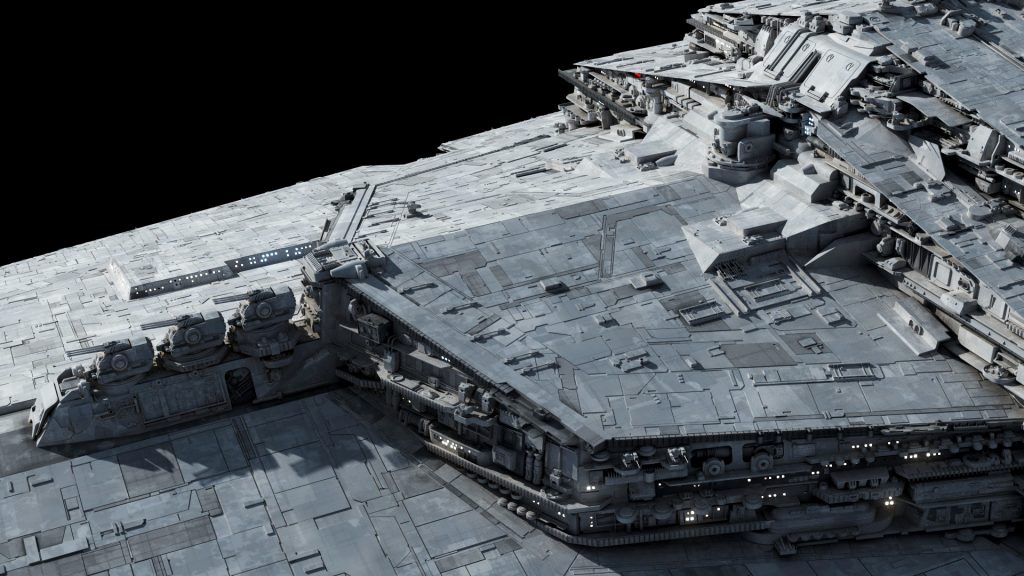 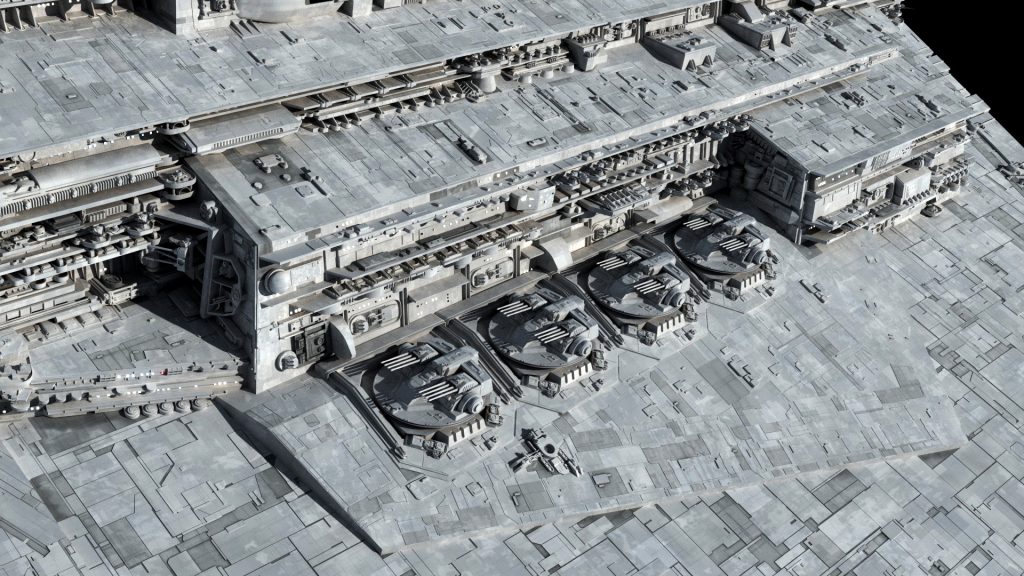 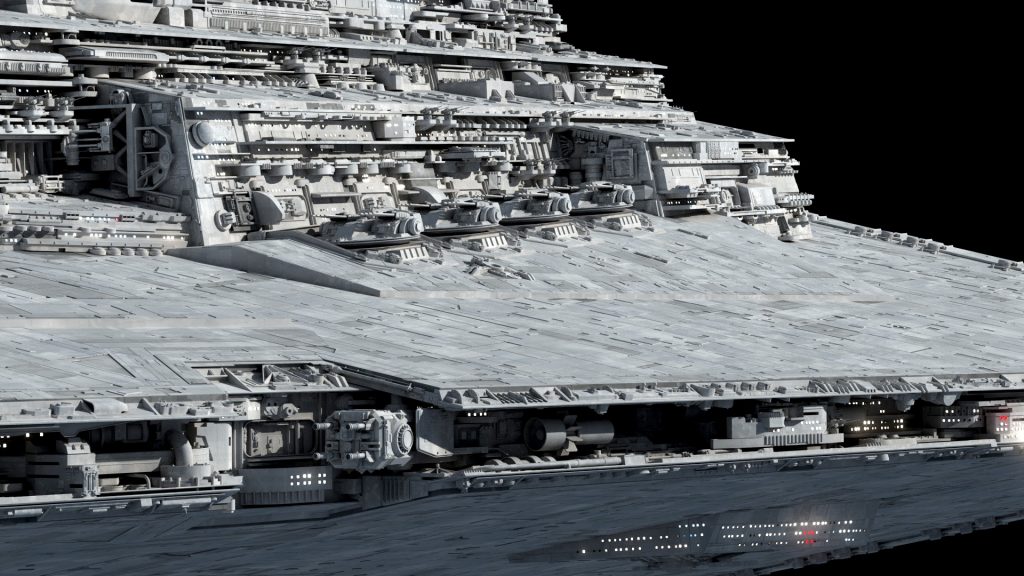 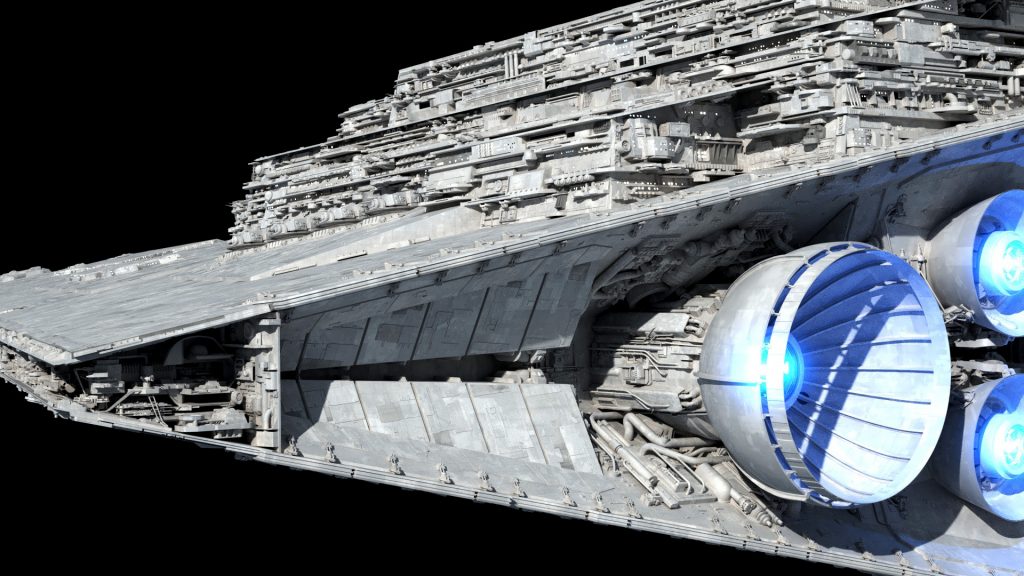 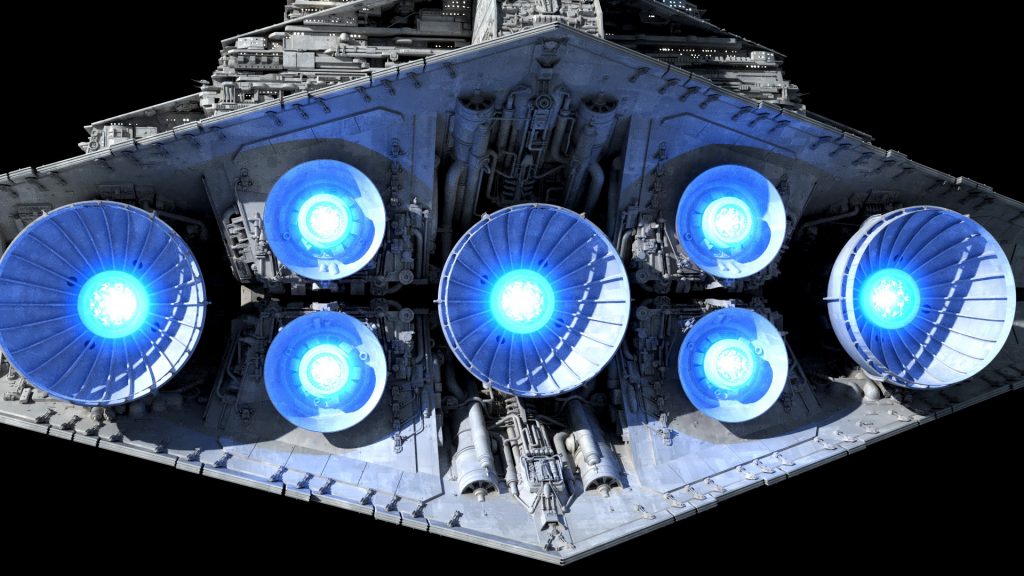 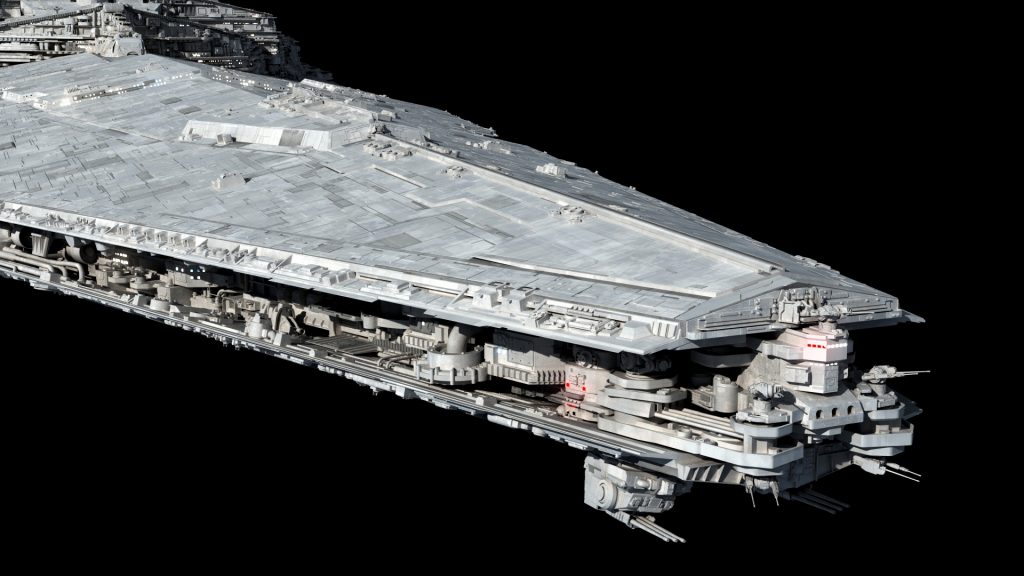 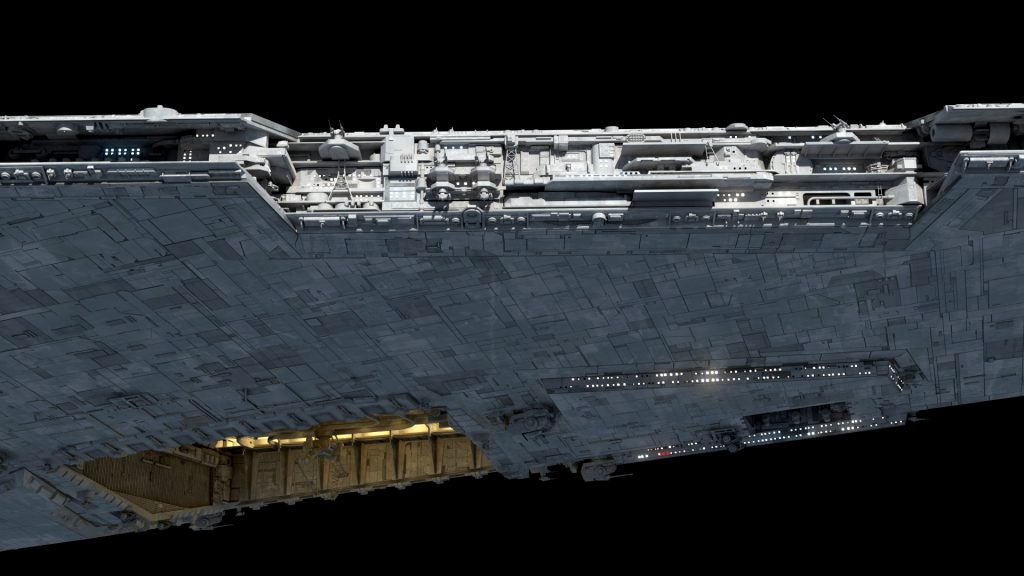 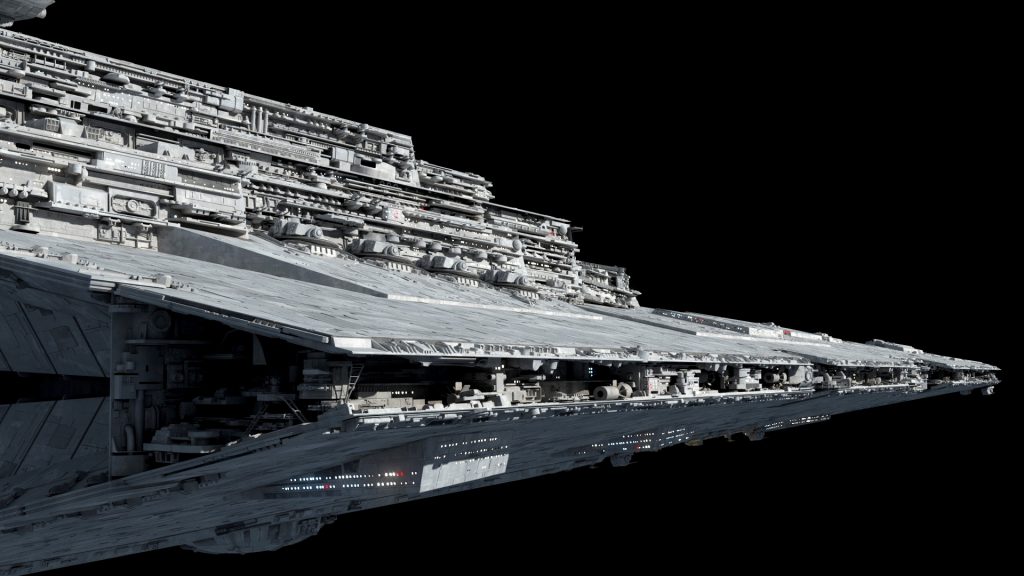 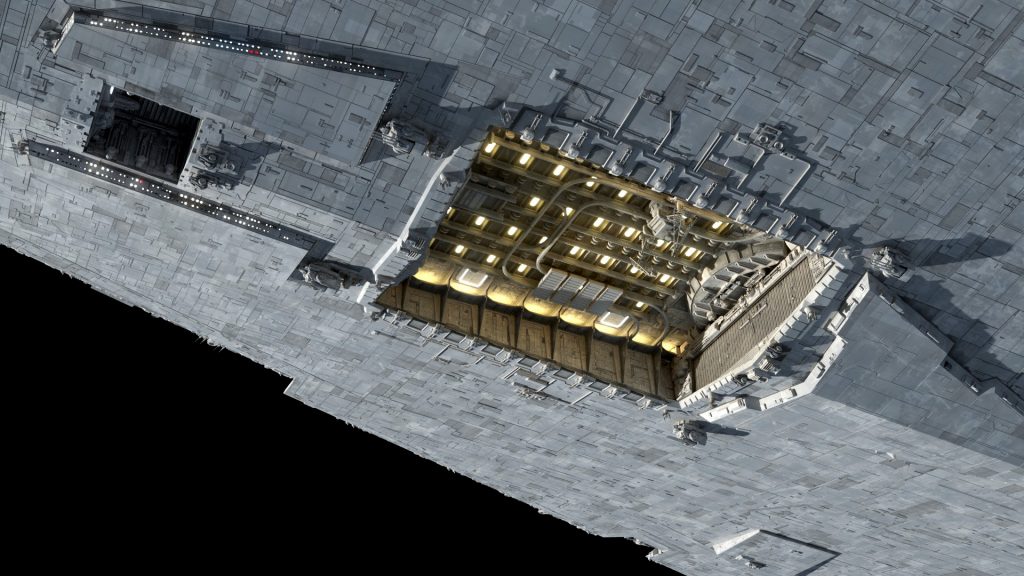 I have to point out that the Imperial Star Destroyer was (with the exception of the large turrets) only ever seen firing single turbolaser bolts, leading me to believe that there are no double-barreled turbolasers aboard other than the large turrets.

One thing I specifically adore on this variant is that the Octuple main battery turrets are elevated a little over each other so they can all fire forward in superfiring arcs instead of the foremost turret blocking the other three.

And the bridge tower is in a more reasonable height over the rest of the superstructure (like in Rogue One and the Original Trilogy) rather than the abomination height the ISDs have in the Rebels animated series.

What were the final gun mount totals?

That’s just some last minute welding going on before commissioning.

“Ah, Sithspew, Project Discostrobe’s compromised.” “Who the frak uses ‘disco’ in this sector? I’m naming the next one.”

Another theory: There has been some dispute about the size of the bridge in some earlier thread. Obscuring it with a bright light circumvents any unresolved issues.

i’d marry it if i could. she is gorges. what is the name of the ship by the way?

Beautifully done. What caliber are the trench quads? Barrels look fatter and shorter than the octuples so in my mind they are around 70 teratons but was curious what you made them to.

Designed to be the 70s from Venator, so yep.

Now I want to see a slow cinematic pan across the whole ship as it leaves some planetary shadow from various angles before it’s sublight flash and it’s gone in hyperspace P:

Interesting how that comm-array(?) expansion affects the command module’s side profile. Plus, gotta wonder how that extra-thorough hangar PD coverage affects guests’ state of mind.

When you’re modelling something, do you model to scale or 1 to 1? I’m an old school AutoCAD draw 1 to 1 and then adjust scale in the viewport, so when I’m modelling in SketchUp its all 1 to 1 as well. I was just wondering considering the sized of what you’re working on. I had to model out El Toro (OC Great Park) once for a job (just the runways though and our tents/structures) and it was a bear with all the zooming.

In 3d software the scale is a little arbitrary, since you can also be pretty arbitrary with the cameras, unless you want to use absolute physical camera setups, which I don’t really care about. I use 1 unit to 1m, so the 3 point precision in 3dsmax lets you do 0.001 units = 1mm.

Hey Fractal you should do an Eclipse!

Fractal must have gotten this request hundreds of times over the last decade. He has previously responded that he doesn’t like its aesthetics, superlaser beard, and lack of surface detailing, so it’s probably not going to happen.

If you and all the other people who have requested an eclipse had pooled your money for a commission, maybe that would be a different story.

I’d love to see Fractal do a ridiculously oversized Uber-Super-Duper Star Destroyer and call it the Overcompensator.