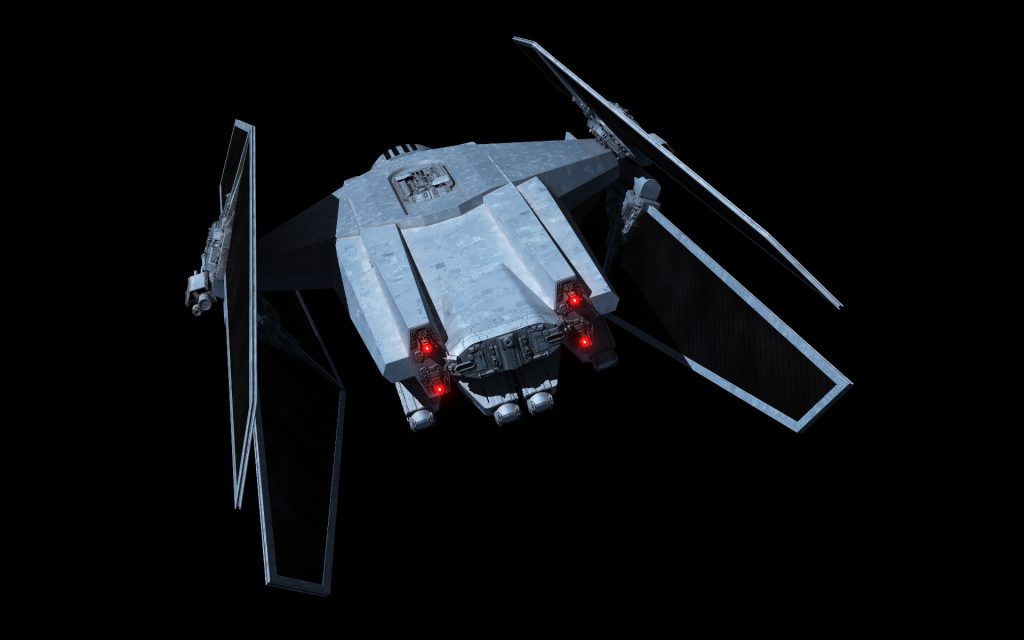 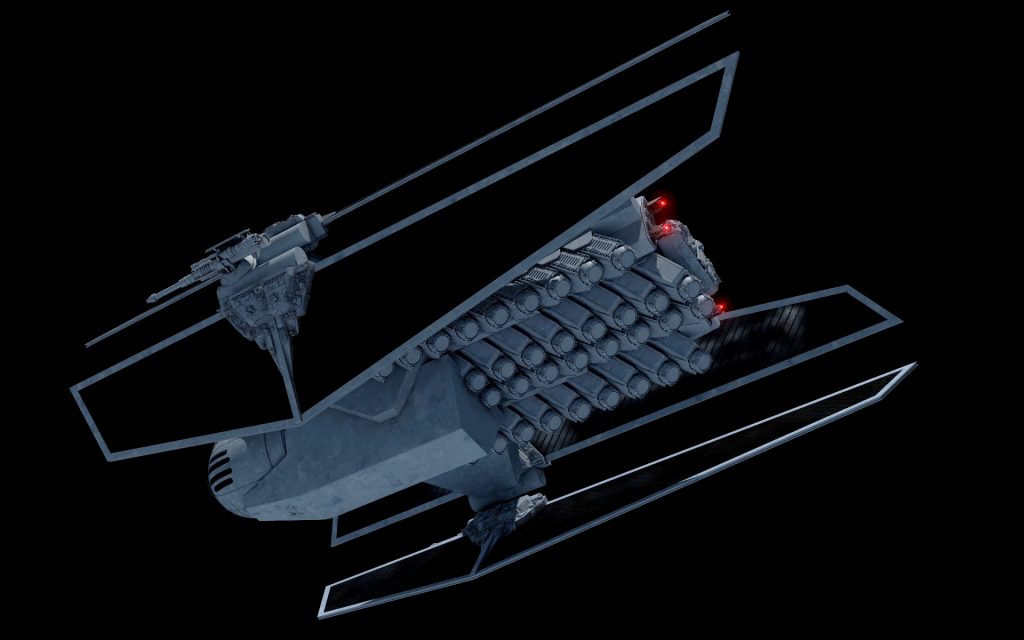 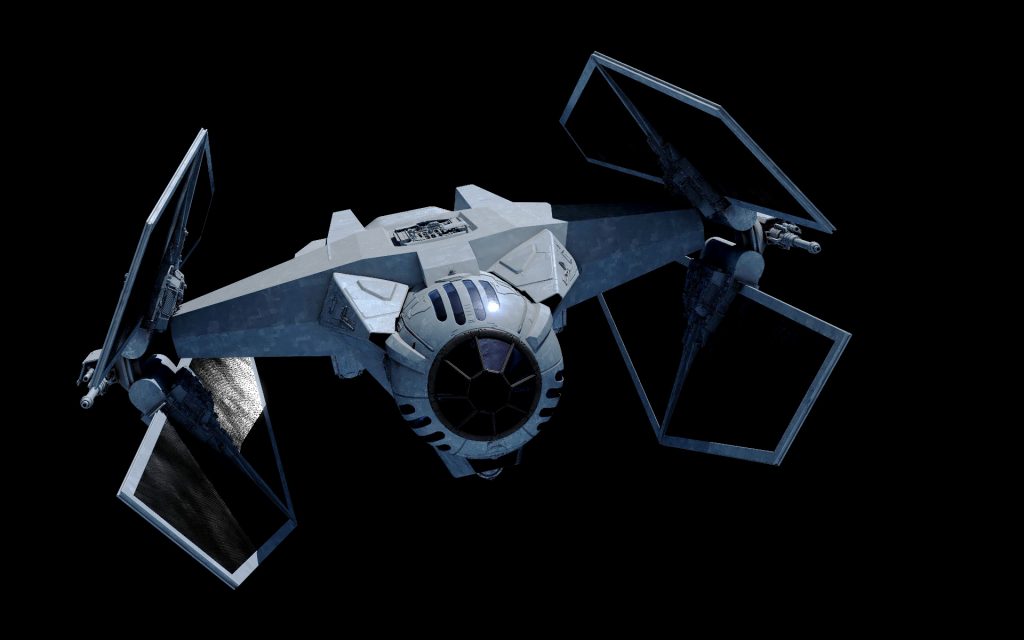 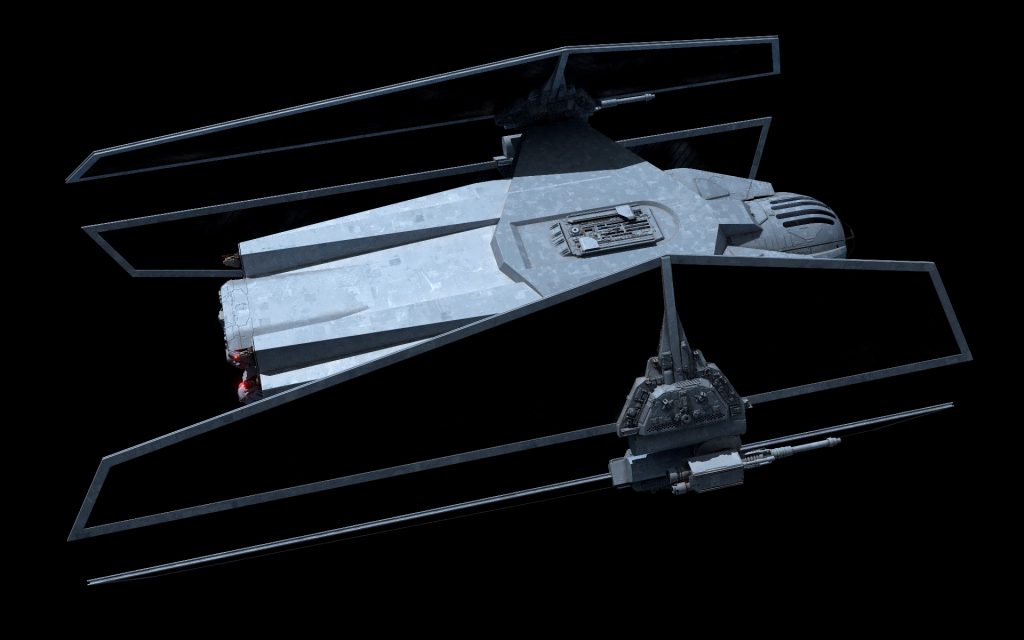 man…your space ships are out this world. Just been in another galaxy looking at your work, so inspiring.

Cool design, only concern I have is that the blasters might be too spaced out. Aside from that it looks great!

Love how rakish and jaunty she is. And much better proportions and styling than the Scimitar. No more gooseneck!

I always found the Scimitar nicely streamlined for a Sienar bomber, but that really ain’t saying much.

Would love to see an interior of this thing 🙂

is it only I, who prefer old TIE Bomber style launcher “pod” to this Scimitars minitubes 🙁 They are so ugly

I like these better. It’s hard to make a bomber pod design that doesn’t look like a bad TIE/sa kitbash.

External missile tubes do seem much more ergonomic-dunno how much non-capital-scale SW ordnance demands anything bigger. Funny how standardized fighter/bomber projectiles seem to be in that regard.

Those looks strange for me because the launcher tubes are directed to the bottom-rear and if you shoot with proton torpedoes or something that is have even less maneuverability it maybe a large time and radius to change direction to the something before you.

Have you seen the rate of turn exhibited by Luke’s torps in ANH? Star Wars missiles seem to have absurd rates of turn, but you need to get really damn close to guide them in against heavy jamming.

I think he was using the Force to guide them.

He more then likely did however, that was the rebels plan all along, so the proton torpedo must have some maneuverability.

The two frontmost launchers in the middle row seem to be stuck in hull geometry, but since this is a WIP I’m confident it will get fixed on the way.

Yeah those are basic blocking shapes. Haven’t gotten there yet for detail work.

What a classic, I agree I like the TIE/SA but it does look like it was sent to the wrong department.

Is a ship like this intended to have landing gear or does it launch/land from racks like a more conventional TIE?

Probably rack-mounted; the wings aren’t really shaped for floor parking, and there’s not a lot of ventral fuselage space for retractable skids.

What about the old Vulture Droid (Clone Wars)? They hoisted their pylons into walker configuration while entering or moving around in docking bays.

Repulsorlift hovering seems handier for most manned fighters, though now I’m pondering whether vulture droids doubled as hangar/external security or were expected to deal with repulsor-jamming-heavy theaters.

They seem to have been designed to have secondary functionality for police actions. Being able to walk around gives more flexibility in law enforcement than a pure aircraft.

So are bombs from a craft like this gravity bombs or do they have a little pusher drive to make them fall? This looks like it would rain an unholy fall of explosives.

They are just launchers – can do freefall bombs or missiles, just like a Scimitar.

Holy crap this look like a Scimitar Assault Bomber on steroids!

I wonder if a dorsal turret might make some sense on a heavy bomber like this, à la Y-Wing, IL-2, or ARC-170. Can the wing guns pivot, or are they fixed?

The radiator panels would limit a turret on the main body of the craft to a very narrow firing arc either to the front or to the rear. A ventral turret might fare a little better than a dorsal one but all in all it seems impractical.

A Y-wing-scale light dorsal turret might have a decent arc WRT threats from above & behind, though SW fighters’ best defense is basically evasion. Those wing guns look fixed to me, though I see no reason a few of those ventral/aft missile tubes couldn’t be loaded for tail coverage. Come to think of it, fire-and-forget projectiles might be handier for SW light strike birds-less need to level out so your gunner gets a shot.

Really like the TIE Mangler look here as a bomber! Wonder if this would be consider a predecessor (as a research project but was deemed to expensive for production) or the successor to the Scimitar.

That Scimitar/Mangler-style cockpit is a very reuse-worthy component. Speaking of which, those guns look familiar-I get the impression this one might be a heavier antiship/antiarmor platform, whereas Scimitar was intended to keep up with Interceptor-ballpark escorts.

Both seem to have 4 engine nozzles, and the Scimitar only seems a bit lighter. This baby has far more launch tubes though, and more radiator area to work with. Perhaps it’s just a more expensive, higher end version, like a Defender compared to an Avenger. TIE Leveler perhaps?

This one will have 6 (2 wing mounted), though it’s a bit questionable if you can judge overall thrust well on nozzle count, otherwise Interceptors (or EU Avenger) wouldn’t be much better than /ln. I like to scale nozzle count because it looks cooler and would give better maneuverability, plus I don’t think each nozzle actually needs to represent an engine, but rather a thrust system that draws off from an engine. In radiator area this will be quite a bit bigger than Scimitar.

I’m taking a Mangler (or in canon terms X1) design approach – a lot more mass but a hell of a lot more power, so high overall capability but you will definitely pay for what you get. But in comparison terms I think a Defender vs Avenger comparison is pretty much there (150% mass, >150% power and cooling so overall improvement in flight performance while higher everything else off of the power margin). In other words I don’t think overall flight performance would be hugely better than a Scimitar (after all it is quite a bit bigger), but all that power means it will carry at that flight performance more than double the ordnance and weapons with stronger shields. And once the ordnance mass is gone, it will be much more survivable because all that extra power is now going to engine, shield, and gun.

Scimitar is a direct (but huge) improvement on the /sa role. This is a little different in intended role and capability.

So somewhat like an SU-34 compared to the previous generation SU-25? Complete with low procurement numbers from the extreme expense it takes to procure them.

Hm…to be pedantic, not quite. Scimitar and this thing would be roughly the same generation, so more like…Su27 vs Mig29. One is bigger and more capable but it’s sort of the same tech all around.

The driver would be munition density. Scimitar is a huge improvement over the /sa in terms of survivability and performance, but not really in terms of ordnance delivered for the cost in hangar volume, which matters for fleet work. In theory it seems more to me like a fighter bomber than a bomber, if that makes sense. This craft packs over double the Scimitar munitions in a similar (bigger, but not double) rackmount footprint. So bigger fleet ships would pack these with Defenders and Manglers because they can afford to allocate more volume for more capability, and then round out the total with numbers-focused sublight fighters like a hypothetical upgraded Interceptor or similar. For maximum density just these and some smaller superiority fighter. Smaller ships on detached duties would have Avenger/Hunter/Scimitar air groups (at least destroyers and bigger frigates – few indeed would be the corvette with room for a reasonable complement of Scimitars).

I think fighter diversity is, apart from maintenance issues, quite a good thing. There’s nothing that says every airgroup has to be a monoculture, or that SW strike packages need to really look very much like modern ones. One could imagine an Imperial commander (maybe less bound by doctrine) could put together a very heterogenous strike that does a lot of things at once – like you have the usual core of bombers with superiority fighters ahead and around to ride the attack into close quarters, then stuff like Manglers and Missile Boats on the flanks providing stand-off cover with long range fire along with massed small ships like pursuit superfast frigates with heavy LTL batteries to disrupt any intercepting fighter swarm (at least until the escort LTL and target point defense LTL range rings start to touch). Use larger platforms as stand off missile trucks, and cue in the warheads with fast comscan/EW craft like Indictors or target relay fighters embedded with the close-in fighter wave.

One of the Hull 721 duology’s neater bits involved the nigh-byzantine intricacy of its small-craft clashes, so color me very much on board with this high(tonnage+space)/low mix policy…though I can’t help noticing some overlap between Sienar bombers & Lambda-cousin gunboats. Perhaps the latter are better suited for detached patrol duties and/or fast corvette hunting?

This brings back memories of absurdly diverse hundred-plane Vietnam era naval strike packages complete with Wild Weasel shenanigans. What is somewhat interesting about Star Wars is how viable massively different platforms, with spaceframes as slow as Y-Wings being able to get behind TIE/In onscreen, but perhaps some of that can be attributed to (spatial?) jamming fields from nearby capital ships.

I’ve always agreed with the idea that Palpatinist/Tarkinist New Order Thought influenced the procurement of relatively vulnerable small craft without hyperdrives in a deliberate effort to suppress individualism, prevent defection, and make capital ships the true arbiters of force. The Old Republic starfighter lobby within the Navy might even have been purged entirely for political unreliability due to being too closely associated with the bourgeoisie.. I mean Jedi. Before Endor, there doesn’t seem to be enough combat attrition to demand evolution towards more efficient designs, and we probably only get cutting edge designs like the Mangler or this bomber in bulk during the true Imperial Civil War. What a pity that the Disneyboot Strike Package seems to be Kylo and his drinking buddies.

The gunboats are a lot bigger than TIEs (well most TIEs) – the basic platforms seems to be fundamentally different. I think the gunboats and cousins are more long range craft analogous to the big Old Republic/Rebel fighters, and only later TIEs with sufficiently miniaturized hyperdrives starting to overlap with them in that niche. In a strike they can co-exist with TIE series stuff easily, and there might be some political/industrial considerations as well with having them procured in small numbers alongside the TIE series craft.