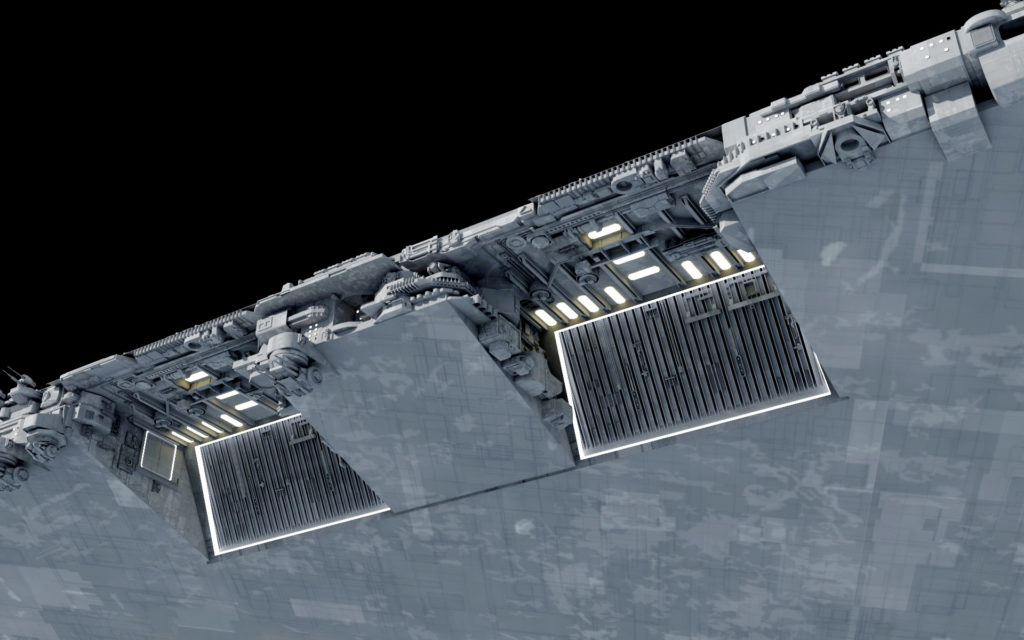 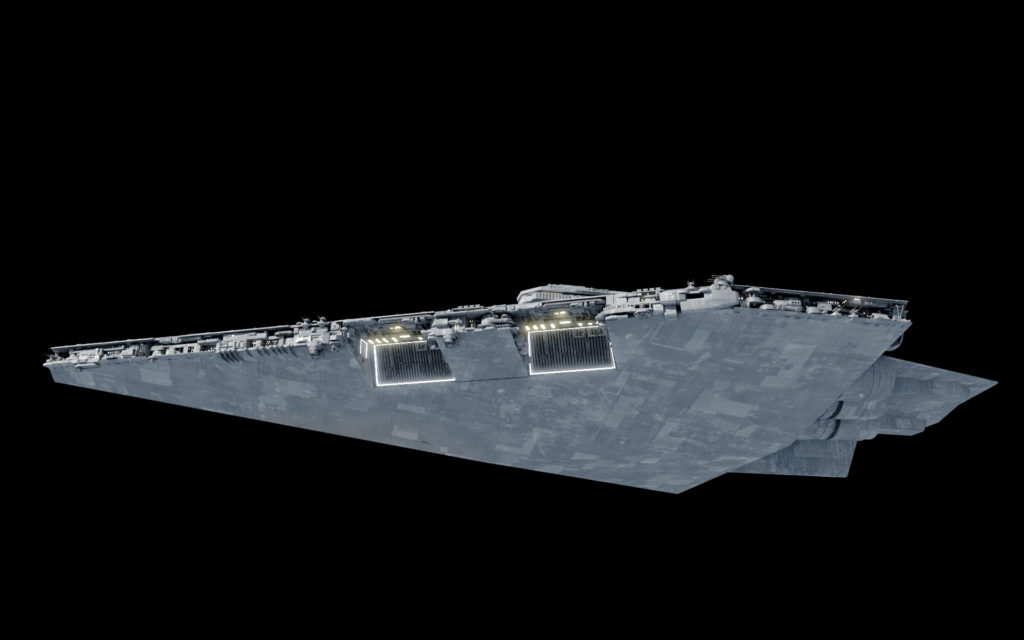 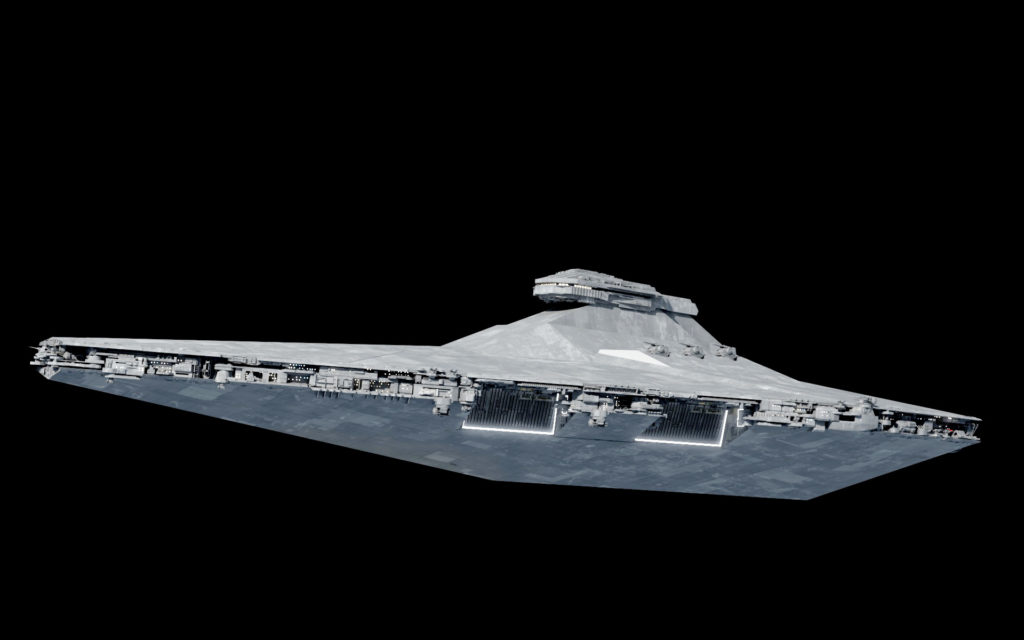 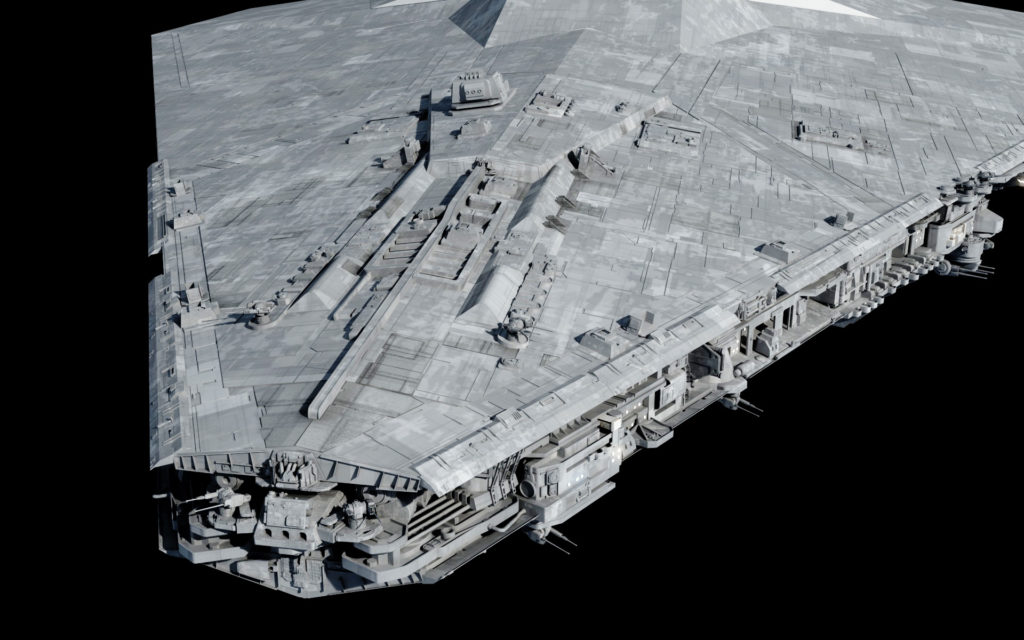 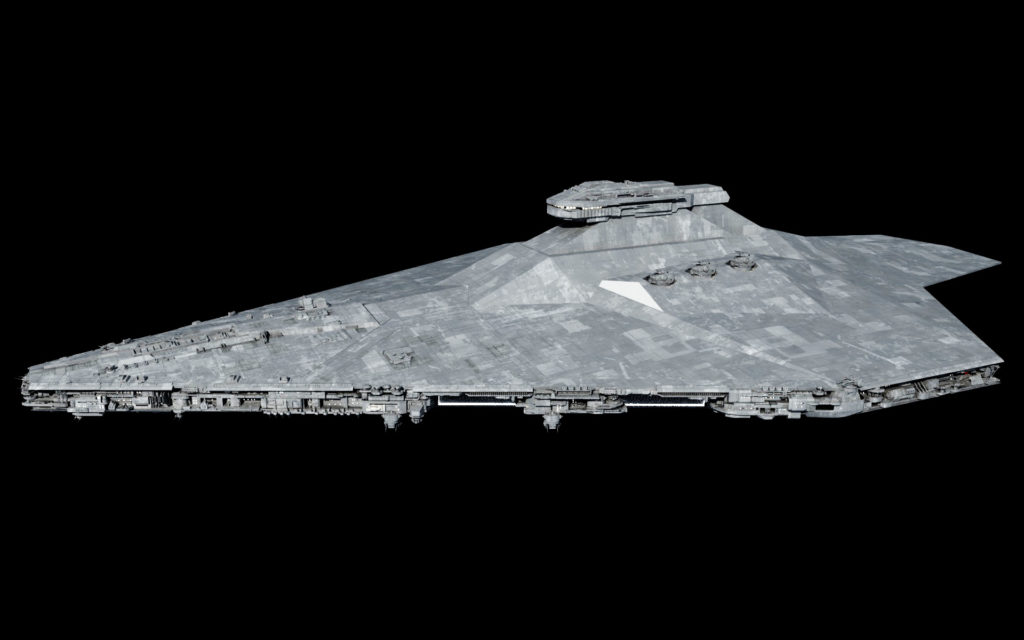 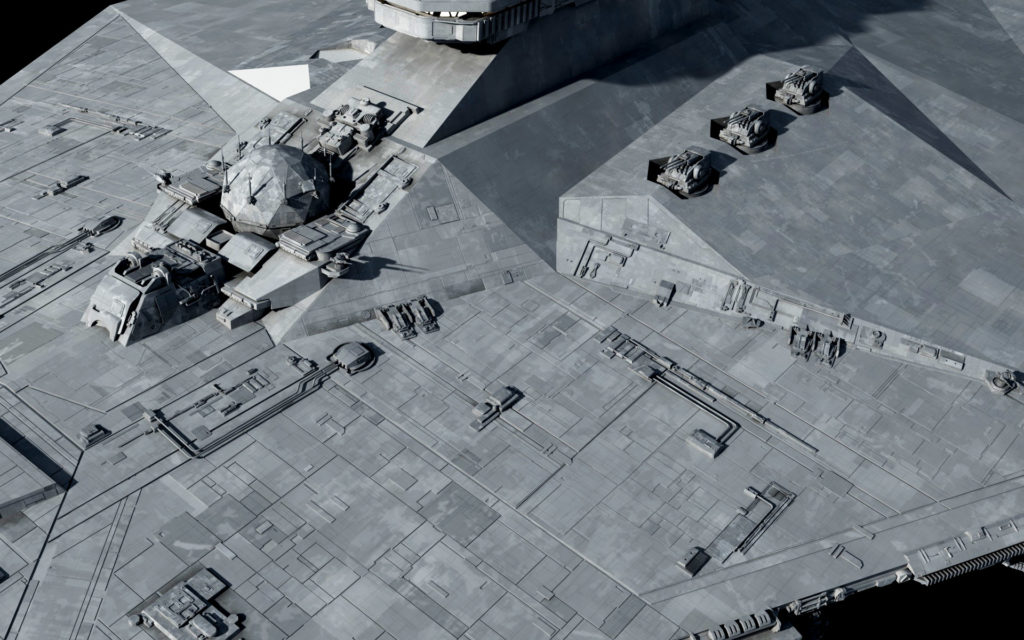 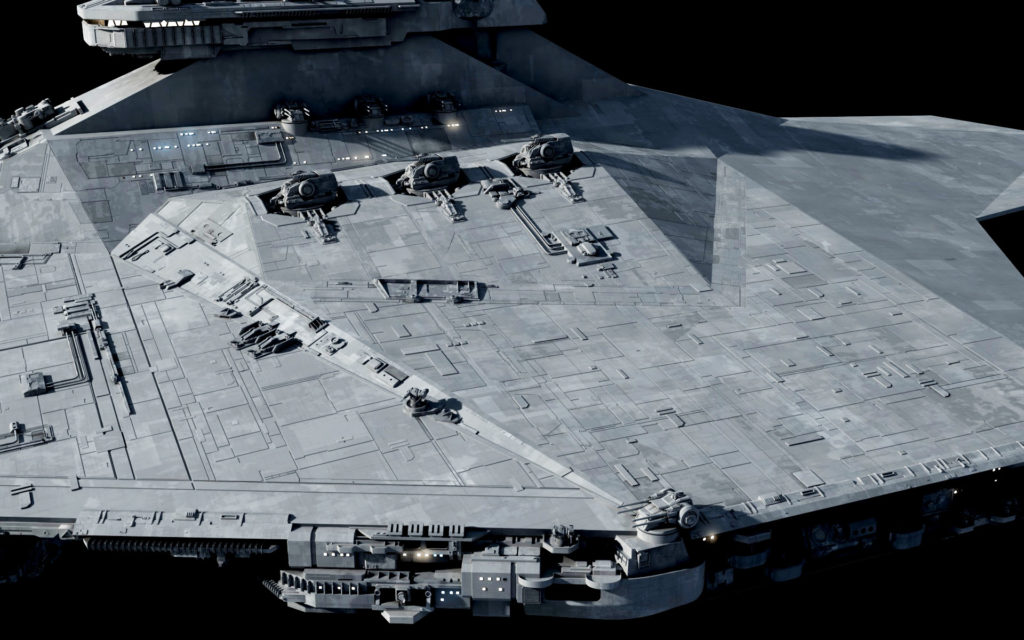 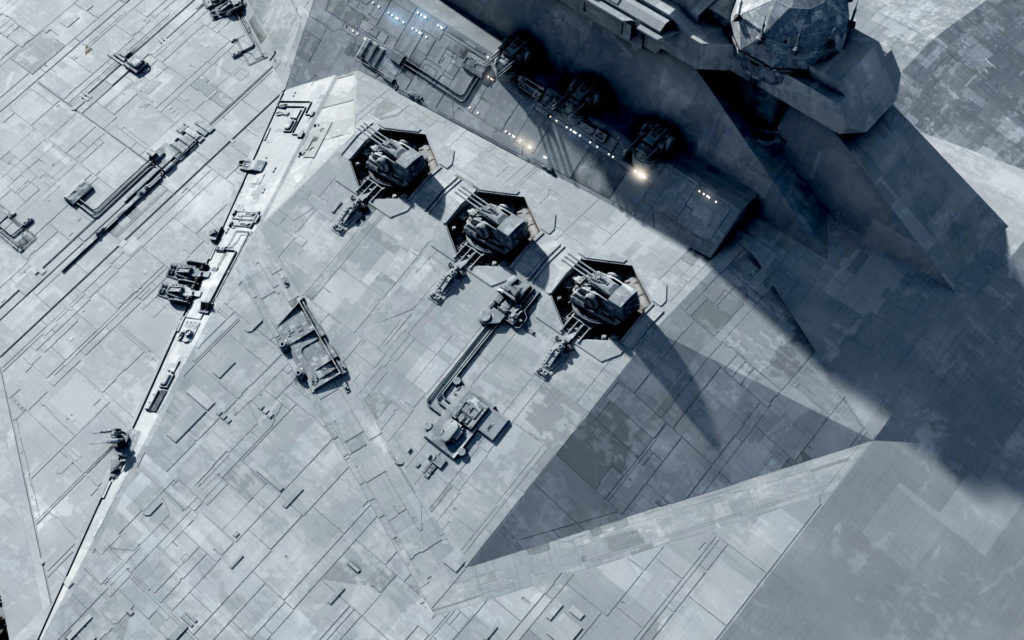 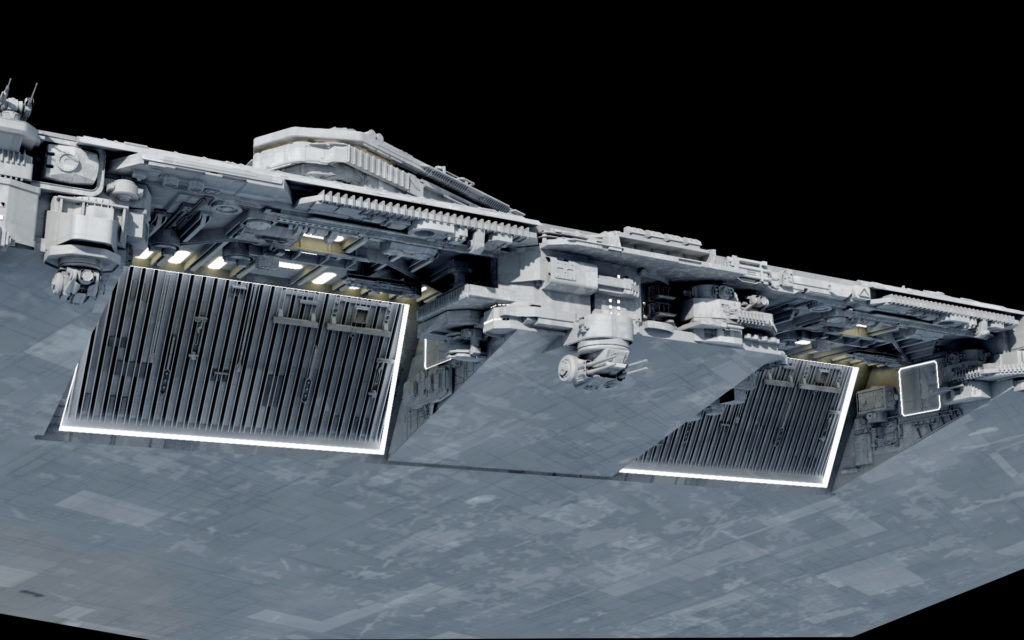 Knowing that each of these « small » hangar bays can carry a full squadron of fighters, I can’t even imagine the capacity of the bigger hangar bays on bigger capital ships such as the Assertor or the Legator.

love how this is coming along, i know you mentioned how it can carry 4-6 sqadrons but mainly 1 sqadron with full support and thoes are two possibles but one of the reasons i like the acclamator is its also quite useful, i could see also taking away some figther support and some infantry and drop ships (not the 30K troops during TCW), but looks like it can be a truly multirole vessel.

I wonder if anyone have figure out that those hanger bays are similar to the Imperial II class frigate’s hanger bays.
Like this:

I do think this ship is actually an Imperial II class light frigate. So yeah.

Eh, there’s just enough difference between the Ecliptic’s bridge pod/hull/bow & those of an Acclamator that I doubt there’s any particular design-lineage connection (they might be produced by the same company, though).

If this is based on the Acclamator frame will it still have the upper hanger??

No, and again, the intention is for it to be the other way around. It’s easy to take away mass, not so easy to pile it on in ship terms.

I’m betting each one of those hangers carry a fighter squadron which round up to 4 squadrons=2/3 fighter wing.

Each bay is at least a squadron – really it depends on the internal layout, which I’m not planning on modeling. 4-6 squadrons depending on type, plus support craft is a fairly safe estimate. Pack it full and we’re talking multiple wings of light fighters, just without dropships and for launch only, rather than long term support.

That’s always the trade off – pack the hangar full and launch a horde but not really be able to manage that on a regular basis.

Nice also in the heavy Frigate WIP#1 there was a hanger bay underneath the ship alongside the power reactor but then you remove them so I guess those side bays are the only hangers bay then and the power reactor is fully amoured.

You know with details this good it make me wonder what would the Allegiance and the Bellator would look like with this kind of details if it get redux like the Imperator. Although those two ships are bigger then the Imperator so it would take much longer to do especially the Bellator which I think could take around a year to do if not more.

It won’t take a year and I’m planning on giving both a 4k redux eventually. They might be a little less dense than the ISD because mostly it’d be full-hull shots, but I’d expect at least Legator level details for both in new versions.

Neat I’l look forward to it sooner or later.

Speaking of the Bellator Fractal in the Bellator’s hanger bays I wonder when you do the Bellator redux if there a chance you could put in some shuttle bays or not? Since they don’t have them.

If anyone from the Disneyboot crew cared to rehash that particular tale of defection, compensating Fractal for the use of this design would be no bad choice.

It’s funny, this design remind me of the RCs Prosecutor, with its vertical hangar door that don’t really fit anywhere on the hull of the standard acclamator model.
Seriously though, I love this. It’s good to see the acclamator line getting some attention from a talented 3D artist. The original wasn’t completely inept at handling threat but that thing is on a whole other level.

I’m not so proud that I can’t admit I cackled a bit maniacally when I saw this was updated again. Yes, yes, give in to your anger!

Is this a rendition of the cruiser seen in Dark Empire?

No, it seems Fractal wishes this to be a design proposal that simplied into the Acclamator design,

Not familiar with a Dark Empire frigate, but if you’re referring to Rand Ecliptic then no, it’s not supposed to be exactly that, though the arrangement is similar. I don’t actually know if there are any better views of the Rand Ecliptic (I don’t have the comic), but it’s plausible that it is a modified version of this design (or vice versa).

Having dug out the collection in question…Ecliptic’s rendition in that comic sports an Acclamator-similar aft fin/thruster combo, but the bridge pod’s rather differently shaped (one panel gives it rectangular ‘winglets’ on either side), and its hull has that Impstar/Vindicator-style dagger taper. Could be another Rothana yard product, but doesn’t strike me as an Acc derivative.

So Fractal about those hanger bay doors if they opened would the doors slide to the right or left?

Segment, retract in and slide right to left.

Can these three Quad turrets even properly rotate when they’re positioned that narrowly against the bridge tower?
In any case, the amount of turrets this design has is rather big for a frigate. Looking at it from this angle, I could even see it reaching Light Cruiser range. I mean, this baby can go toe to toe or even defeat an Arquitens, right?

Correct, and yet the Arquitens is classified as a cruiser, a ship type which normally should be superior to frigates, lol.
The Arquitens has indeed quite few weapons in terms of numbers, although they are depicted as rather effective in both The Clone Wars and Rebels damage-wise.

For all intents & purposes, Arquitens seems to be a corvette with just enough punch to prey on smaller corvettes & light freighters, though it sports a nigh-pointless TIE/ln complement & seems to have issues with gunboat-grade attackers-I recall Gerrera’s U-wing putting a rather visible dent in one before it got completely totaled by a fuel tank(?) detonation. Seems best employed as basic traffic/convoy security or escort for something like a Ton Falk carrier.

Well, the engine section of the Arquitens does look very similar to the Consular-class “Cruiser” and those are certainly Corvette-grade ships, even though the Charger c70 Retrofit is sometimes called a “Republic Light Frigate”. The Arquitens is length-wise completely in the frigate range though as a Nebulon B is 300 meters long while an Imperial II-class frigate has 400 meters.
Arquitens is right between those.
During Republic times, it seems to be the to-go escort for a Venator or Victory I SD while in the Imperial era it seems to be like a standard system patrol ship and customs control vessel. That Kallus in Rebels once made a “blockade” of a planet with just three Arquitens vessels and two Gozantis is almost ridiculous…and then Hera and Sabine wrecked one of the Arquitens with the B-Wing prototype. <__<

Eh, I’m willing to handwave initial half-baked blockade attempts as “Oh, just a practically-undefended Rim mudball, surely a scratch force will suffice.” Would’ve been neat if Imp escalation had forced the Rebels crew to link up with a budding Mon Cal task force, but they seemed bent on playing that “scrappy insurgent cell trumps insane odds ‘cuz the Force wills” trope to the hilt. Still not sure I can roll with fighter-scale microsuperlasers, though at least that prototype wasn’t Sun Crusher-tier rigoddamdiculous.

Small scale composite-beam lasers are fine given their presence in AOTC, and no one is claiming that the B-Wing is approaching true capital-grade superlaser power. My estimate for the prototype B-Wing’s yield is far closer to Fractal’s Mangler LTL, which could probably achieve local burnthrough on an Arquitens. The “blockade” wasn’t expecting much resistance and was probably diverting output to guns anyways.

I think we did get a few shots of the Mon Cal fleet after the Mothma arc, but the focus on Force hijinks is always disappointing. At least the Clone Wars restart seems to feature a sizable Republic fleet from the trailer.

Fair point WRT the LAATs & our host’s anti-corvette TIE. As for this Clone Wars wrapup, be interesting to see how much budding Imp aesthetic (grey Venators, early TIEs, etc.) starts creeping in. I do hope nobody feels any pressure to cram in further Death Star blueprint drama, since R1 amply covered that.

Instead of “budding Imp designs” (grey Venators were first seen in RotS and TCW is supposed to end just before RotS starts and the movie itself has still red/white Republic Venators) I would actually be super-duper satisfied if Filoni & co. finally reveal a canon design of the Victory I-class Star Destroyer with Republic markings. The VicStar I is supposed to be part of the Republic fleet during the last year of the Clone Wars even in the new canon and yet no work has taken it up so far.
The Venator and Victory I would actually make a good tag-team battlegroup I think.

One would think that the Imps have at least a surplus Bulk Cruiser, Dreadnaught or Acclamator around for Kallus to stick his flag on for a flagship of that blockade, but whatever, lol.

Yea, the shots of the Republic fleet in the new TCW Trailer look actually impressive, as if they actually do want to pay attention to scale in the space battles this time around.

The dude is an ISB agent, not a Moff. A couple of Arquitens detached from convoy escort or search & rescue are probably the largest fleet assets he can wrangle at his pay grade.

I was surprised by the quads being there as well, i don’t mind the extra firepower maybe if they were spaced out just a tad bit more. I’m thinking that must be a weak spot on the ship or something or they’re just providing extra anti-starfighter cover for the trips

I might tweak it a bit but they have a full 180 degree traverse range. They are there only because the Acclamator design has a battery there arranged similarly, and I wanted to maintain continuity.

That’s right, I always forget about those quads being there on the Acclamator. Besides for the cross section, I can’t recall if those quads ever really appeared (in detail) elsewhere in any SW content

Precedent’s precedent, even if those light quads would have a lot more breathing room atop the bridge module.

Indeed, although I do wonder a little about the nomenclature here as normally one would assume that a cruiser eats a frigate for breakfast. Yet this heavy “frigate” massively outperforms a design that is labeled a light “cruiser”. Shouldn’t the designations be reasonably switched?

Since I’d be very surprised if anyone involved with Disneyboot continuity cared about such corrections, might as well handwave the designations as a mix of differing standards (one world’s ‘cruisers’=galactic-standard ‘frigates’, etc.) & marketing.

Oh wow, those are some huge hangar openings!
By the way, Fractal, I know I asked this before and sorry for asking it again, but will you make a model on Victory II-class frigate from original Battlefront 2?

That’s the super-slim triangular one with rectangular aft ‘winglets’, right? Wish it didn’t share that name with a destroyer design (ditto for the ‘Imp-II’ frigate).

Yeah, slim triangular frigates with wings jutting out in the rear. I like it since it looks so sleek and its secondary/tertiary engine configuration – with two flanking the bridge if I remember correctly – seems interesting,

No plans unless it’s commissioned by someone.

Ah, okay. Here’s to hoping someone else seeks to see the rendition of this ship at some point im the future and can take the commission!