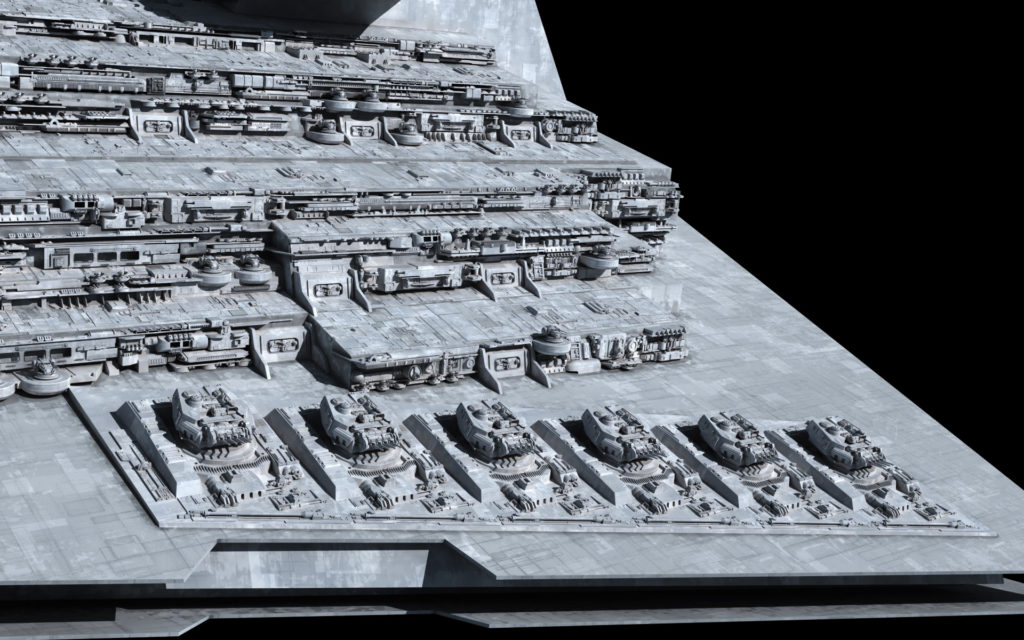 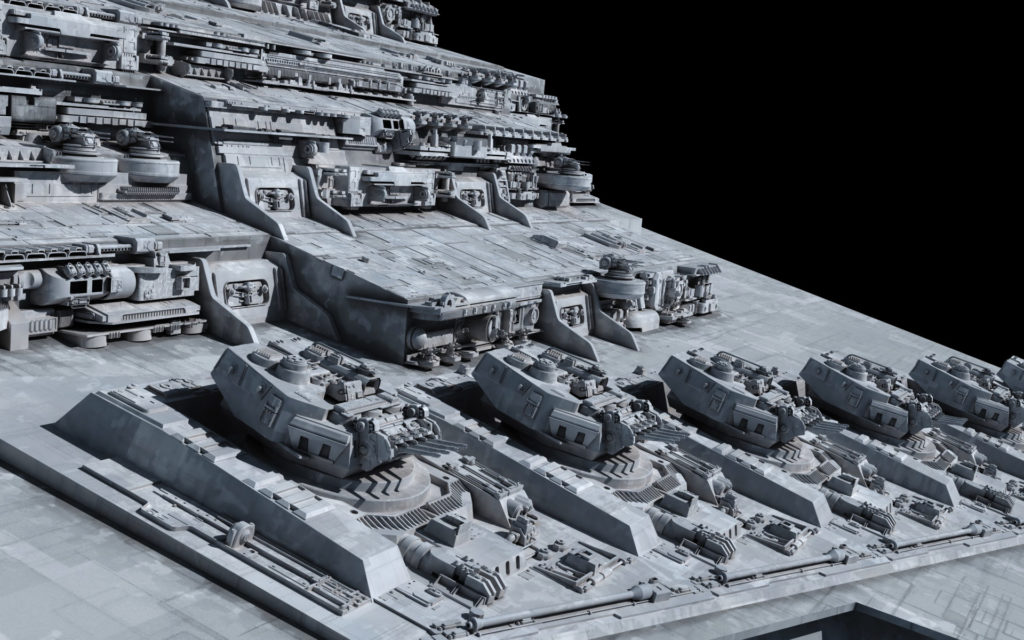 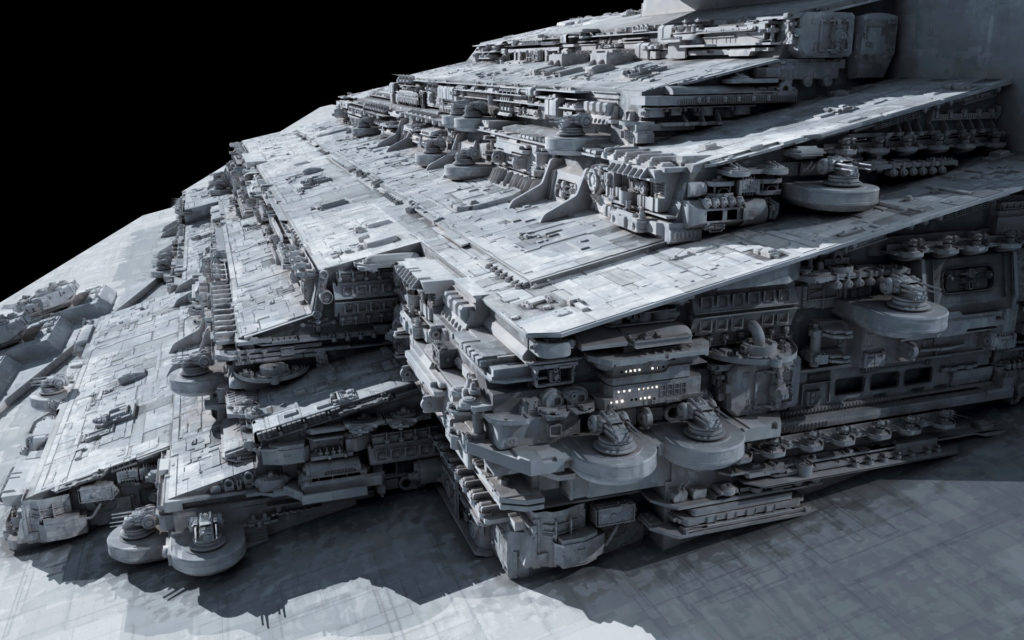 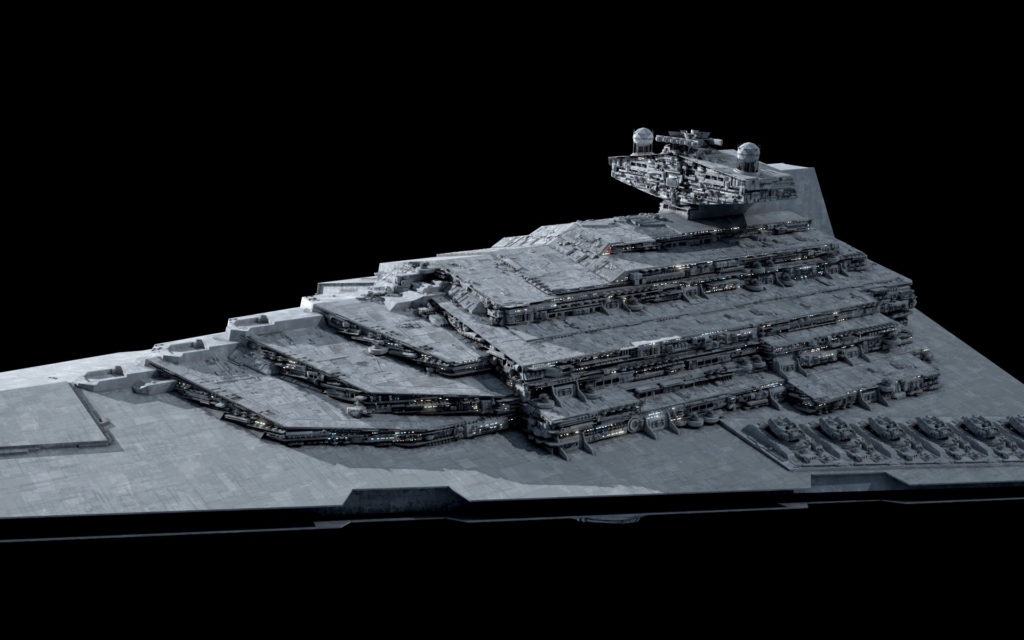 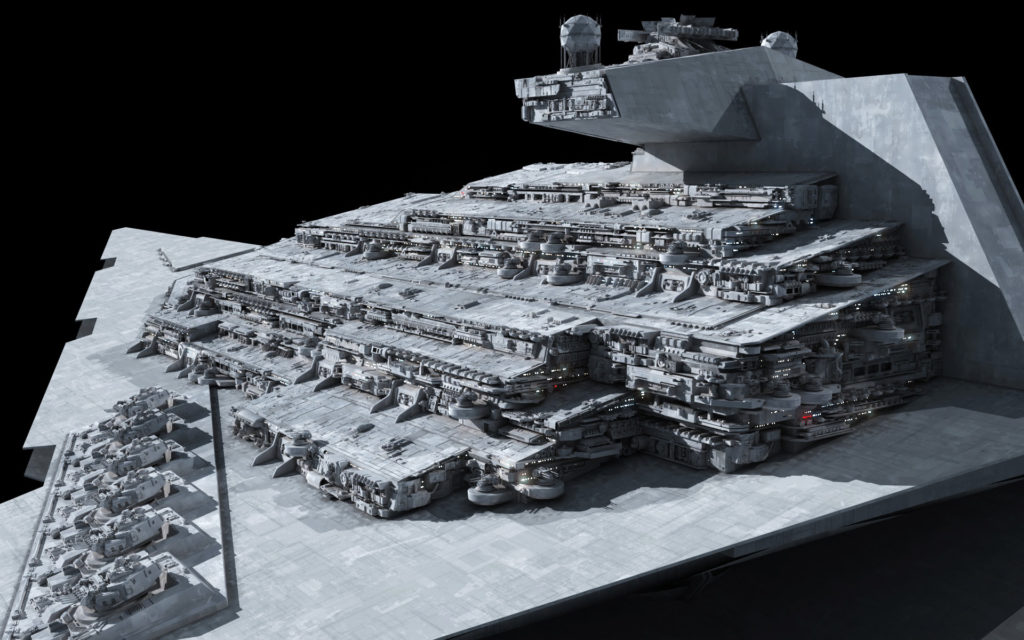 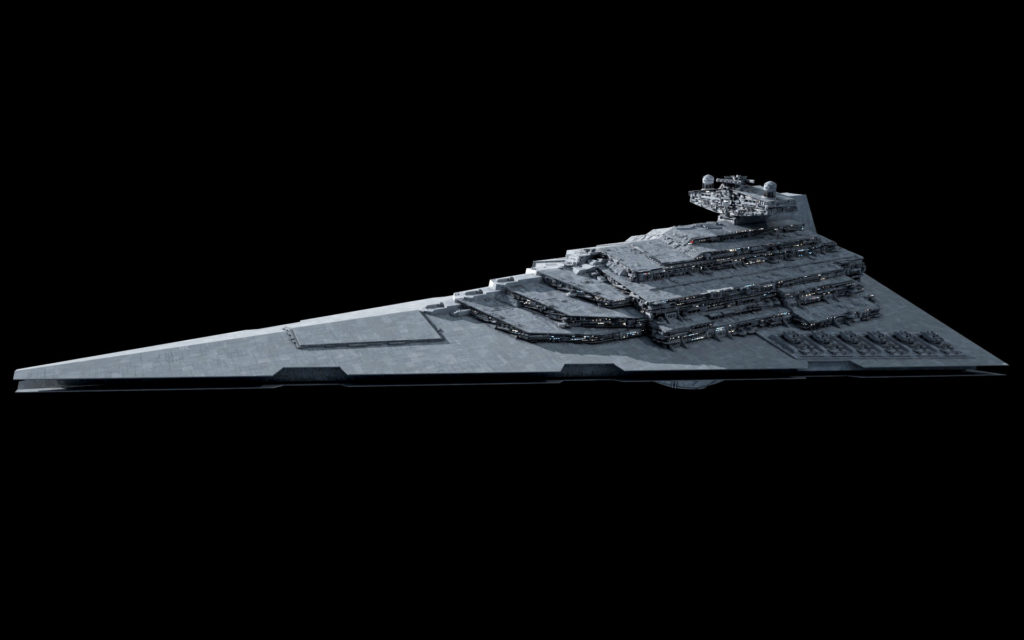 Have to say this is a very cool and logical design. a slightly up-scaled version of the ISDII with a heavy emphasis on slugging broadside with someone. I would think this would be a mainstay in any battle group.

I noticed looking at the turrets on this ship and they contain 4 cannons. I was comparing it to my favorite render you have done to date, the Bellator, and that ship has 2 cannons turrets. is this an oversight? a function of redoing the render, or on purpose? Being the Bellator is a significantly heavier armed ship and has two reactors giving it a substantial advantage power wise, I would think the turrets would at least be par between the two ships.

Bellator has two kinds of main turrets – twins and quads. The twins on the Bellator are much bigger guns. The quads are double pairs, and those guns are larger than the ones on the Allegiance as well.

Thank you for the clarification. I appreciate it.

Can somebody enlighten me as to why star destroyers are almost always weak on the ventral side? Not such a big deal if operating as part of a large fleet, but when operating independently this seems silly.

I assume your talking about weapons load out, which there’s a few reasons it’s not really necessary.

First, is that the SSD’s and larger can actually maneuver fairly quickly- for ships of their size, and for how quickly an opposing vessel can close to attack range.

Second, it seems some how (even magically,) that ships tend to operate relative to the planetary plane of whatever system they happen to be in. They’re almost always operating on a similar orientation.

Third, the hull’s shape means that they can fire on targets that are abeam, and a few degrees to ventral.

Finally, against an opposing vesel that likes to maneuver, there’s no reason they can’t plow ahead, with a few degrees downbubble to keep them in their firing line.

Now, for the reasons to not do so.

First, you have to cram a whole lot of stuff into that hull, and it would be far less complicated if you restricted your heavy weapons to only the dorsal surface (power, amunition supply, repair. Vulnerability to debris in space.)

Then, if you place weapons somewhere, you can’t place other stuff there.
Finally because most SSD’s are designed to carry at least a few subordinate craft (TIES, shuttles, bombers. Bounty Hunter Scum.) and deploying and retrieving them is probably a vastly more common occurance than firing the heavy weapons- and you do not want thin, pointy and hard to see objects obstructing your approach.

I always wonder if the Shockwave from Darksaber was a Allegiance?

If the only criteria for the thing was the ability to knock out a Victory-I in a single volley, the Allegiance should qualify pretty handily.

Does this one have a spherical reactor?

Yes. It is buried a little deeper in the armored hull, but you can see it in the WIP 1 post.

For the love of god, can you PLEASE start keeping total weapon counts on you big ships? Working it out based on the end pictures you provide is all put impossible due to the scale and resolution limitations. Just from the current WiP, I see at least 20 quad LTLs on each side so far, and I’ve likely missed one or two simply because I can’t make it out. And trying to pick out the snub-fighter scale weapons is a lost cause.

I agree that the lack of weapons counts can sometimes be frustrating, but we must remember that this is Fractal’s hobby and he has every right to not spend his own time counting how many weapons he ended up placing on a big ship like this.
You can open the images in new tabs (on a PC) by right-clicking and selecting “open link in new tab,” that hugely increases your ability to see everything. If you do this for WIP#1 as well, you can get a good count.
Also, the quad turrets are medium turbolasers. I count at least 87 single-light-turbolaser-with-single-heavy-laser turrets (point defence turrets) on each side of the superstructure so far.

Your right to remind us that it’s a hobby for Fractal and we probably shouldn’t get too anoying. On the other hand, I would be surprised to find that Fractaldoesn’t have a notebook or something with all of those details written out before he starts work on a design. Fractal’s work is just too detailed. I mean, *way* to detailed.

I’ve asked before. He works on commission; pay his rates for a project that size and he’ll do it.

A small short snippet of the basic dimensions, reactor output, tonnage, and weapon count would be great for EACH of these great ships.

I know that this is work in progress, but it feels like it’s done. The detail is just perfect👌💯

It’s been long since I’m wondering what these quad cannons are: point-defense? Turbolasers? What exactly are they?

he should also add the ion cannons in the front

Just because they’re in ball mounts doesn’t mean they are ions. I think Fractal said that they were turbolasers in the past, and I expect him to slot them in when he’s ready.

Does the Fractal Allegiance even have ion cannons? I don’t recall any mention of them but I might be wrong

The lighting set you have for this is as close to perfect as you’ve done. There’s enough shadow to show details and depth but not so much it obscures things. Please don’t tinker with it.

Hey Fractal great work as always. Would you ever consider designing your take on the Turbulent-class Star Destroyer?

Hey Fractal, I got a idea for you, are you fancy building Dominance Star Destroyer, its concept you can find in Google, but you are best on making Star Wars Ships redesign. So, if you will find some free time, meaby take a look of this.

I suppose you mean this: 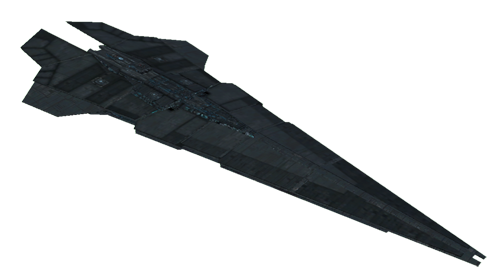 As for it’s design doesn’t look interesting for Fractal to design it.
It just look like a shorter winged version of the Vengeance.

Well, where do you know that Fractal doesn’t interested in design like this ? Are you expert, I was just saying idea….

Fractal said on his Personal Commissions “I will only take projects that are interesting.”

Those main batteries makes me all giddy with joy!

I’d imagine so, since the Imperial design philosophy would account for maximum forward firing arc.

Just LOOK at that fucking citadel.

She’s looking amazing, i’m surprised that the broadside heavy turbo’s are not octuple mounts, I assume they are just a more powerful quad mount, this not needing the 8-gun mounts of smaller ships? And yeeesh! All that point defence! That’s going to be hell!

ah hah! Makes sense 🙂 And these are the same turrets mounted on the Bellator and friends I assume.

No the Bellator’s, Assertor’s and Procurator’s quads are 240 teratons per shot.

Sweet Emperor…gotta ask, where ya getting these numbers?

And the picture to compare: http://fractalsponge.net/wp/wp-content/uploads/2016/03/all_turrets.jpg

This is going to be so cool when it’s finished. The level of detail here is amazing. And all that point defense! I imagine that thing would be pretty terrifying for an X-wing pilot who got too close to it.

Have you made any significant changes to the general shape?

Some changes, but can you tell?

If you compared the profiles, the terraces are a few decks lower. The trench is a little bit compressed. The main gun battery is heftier and the barbette protection is quite different. But overall, quite subtle differences.

The turbo laser emplacements don’t seem to be spaced the same, are they all capable of forward facing with this layout? It appears from the old 4k shots that each had a fairly decent forward firing arc. Is this changed?

Did you add a larger weapon mount on the upper hull of the forward super structure?

I was going to say it did look flatter but with the limited perspectives I wasn’t sure!

I was secretly hoping for a version more in-line with the version shown in Dark Empire II–with what appears to be much more streamlined terracing and a taller bridge super structure (reminds me of what they did with the stylized ISD’s in ‘Rebels’) BUT I admit that I might not even be thinking of the same ship and/or class as what we’ve got here.

I think it’s supposed to be the same ship, but I don’t like the super-streamlined version as much as the stepped terrace look.

Fair enough! It’s a pleasure to see the progress regardless of style.