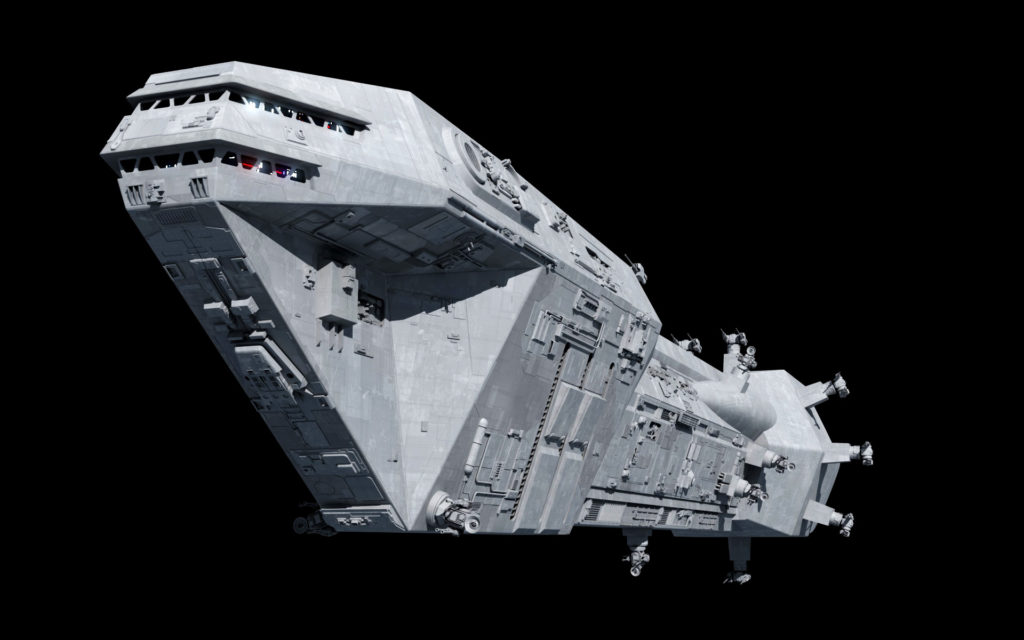 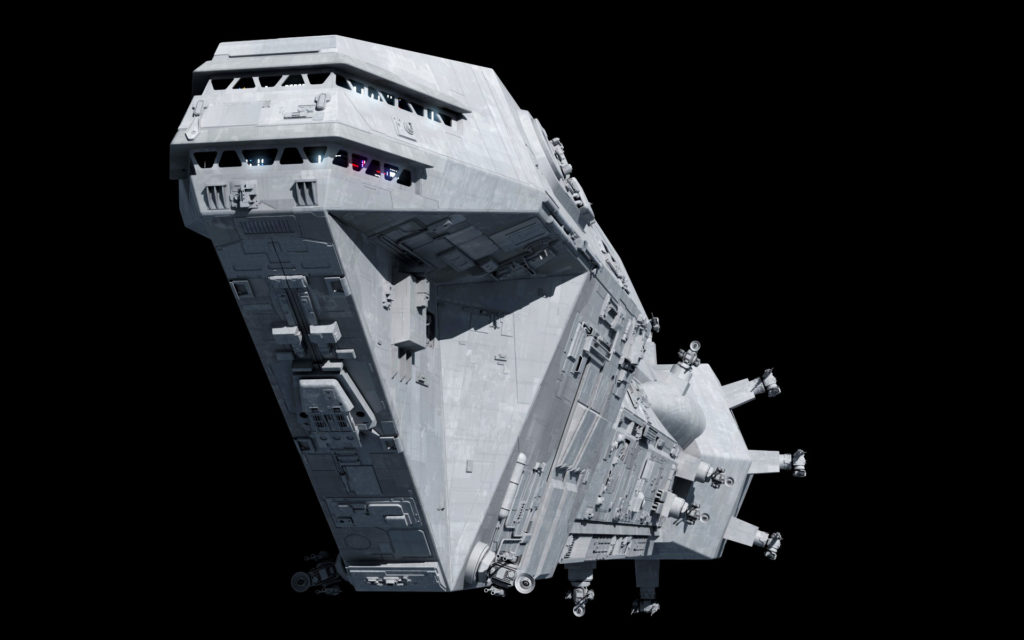 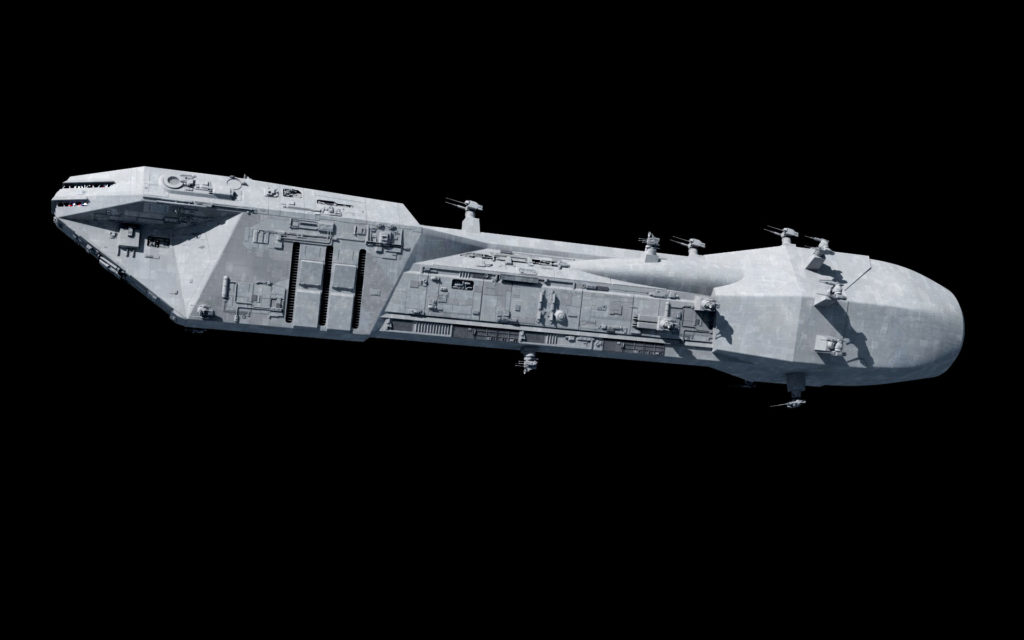 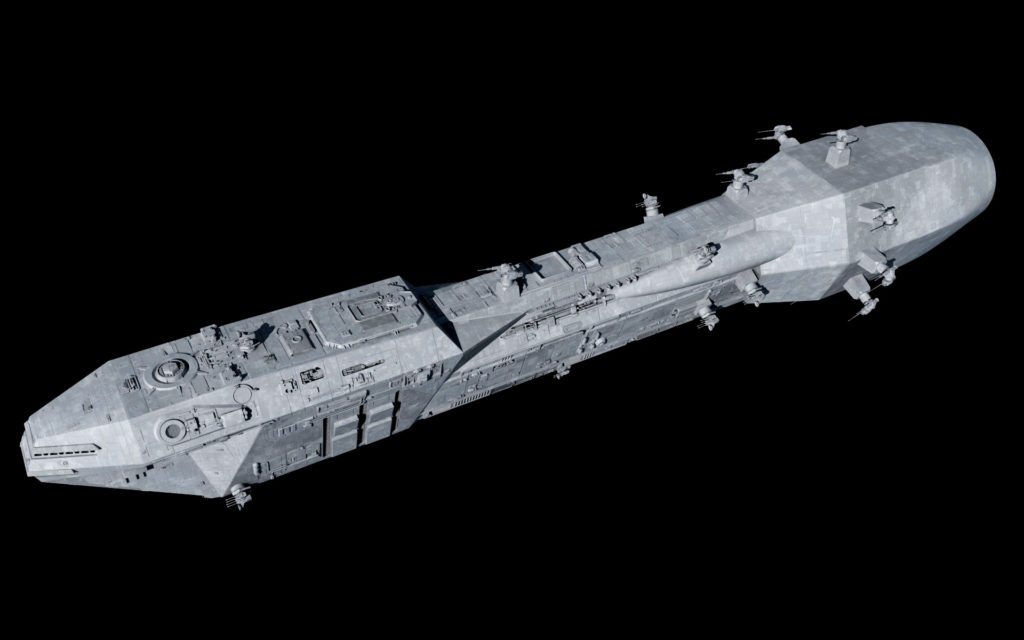 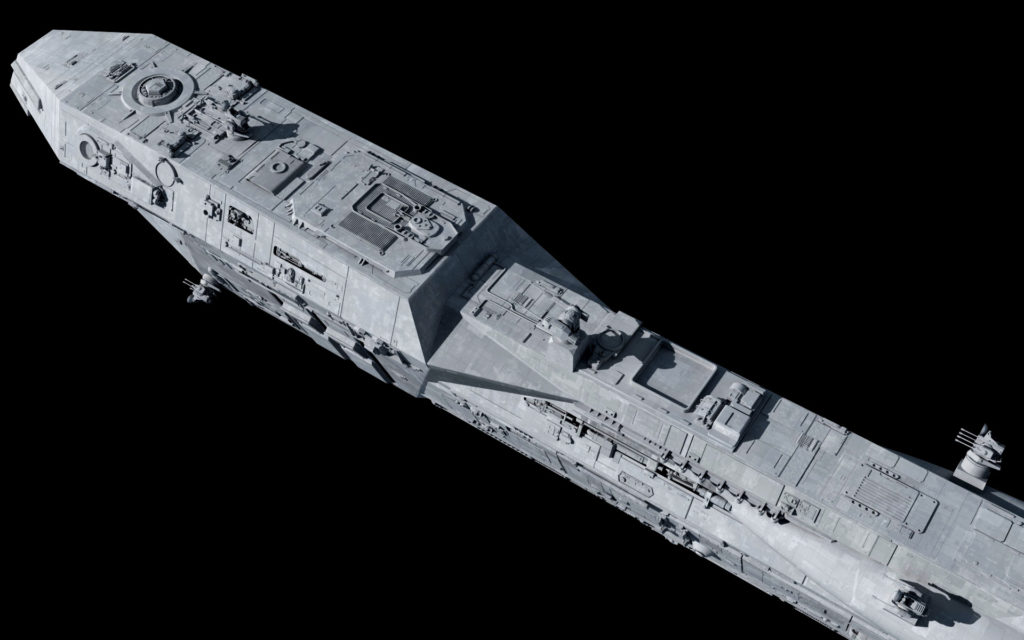 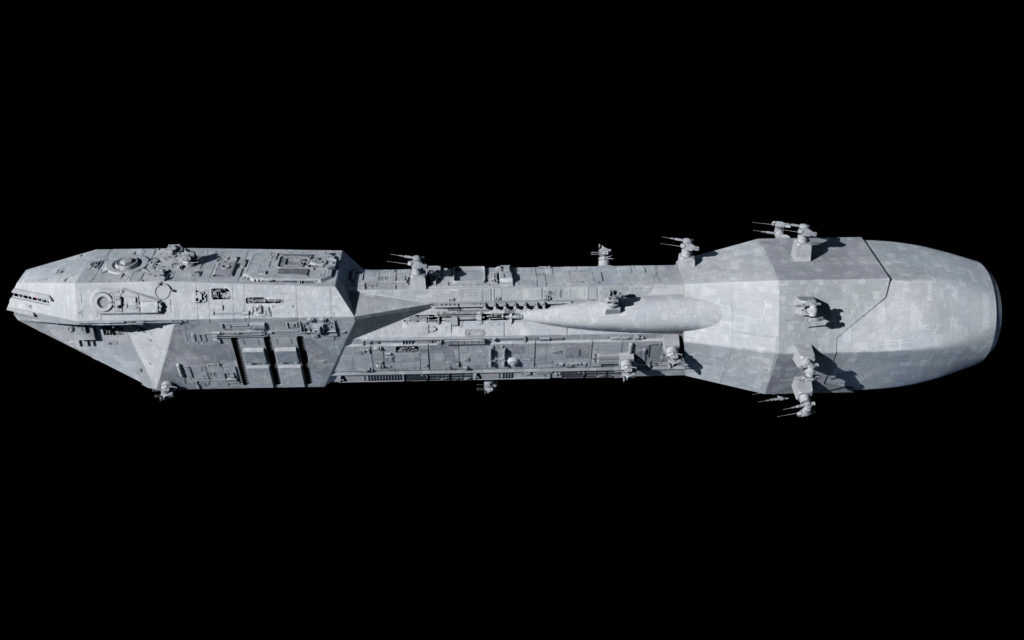 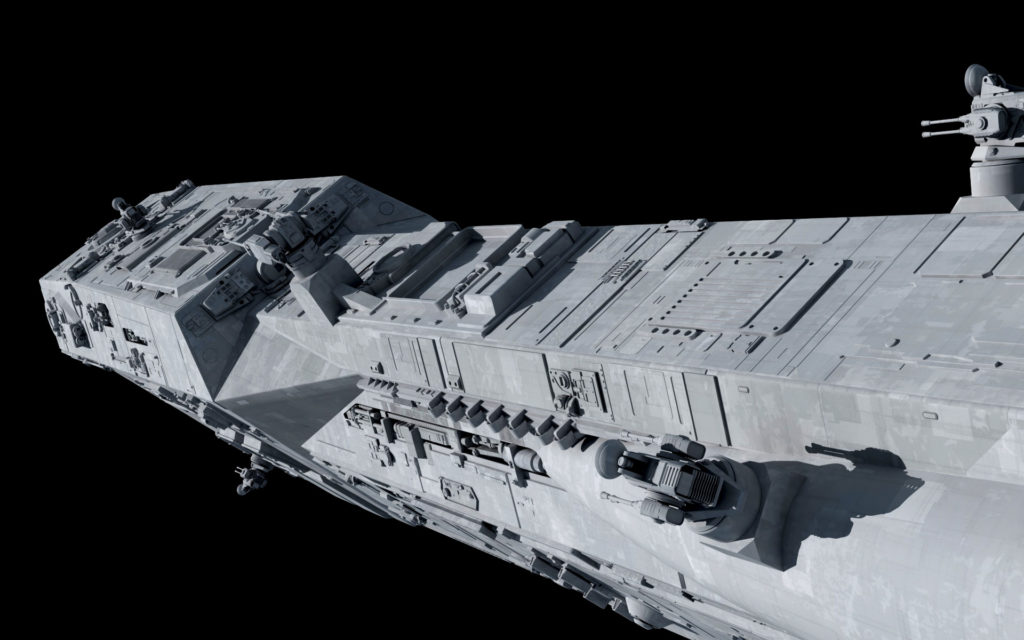 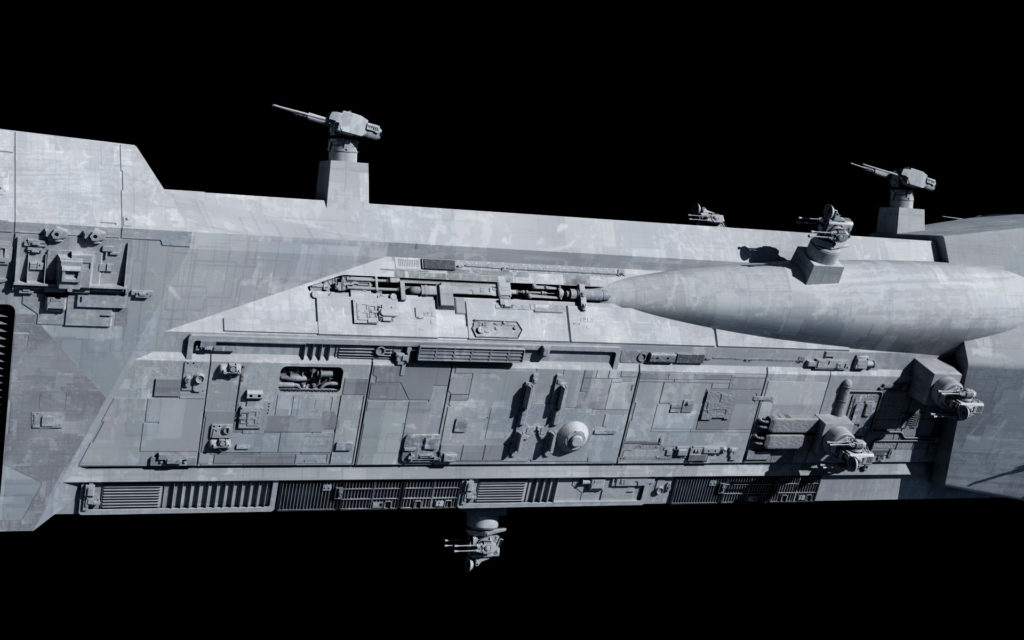 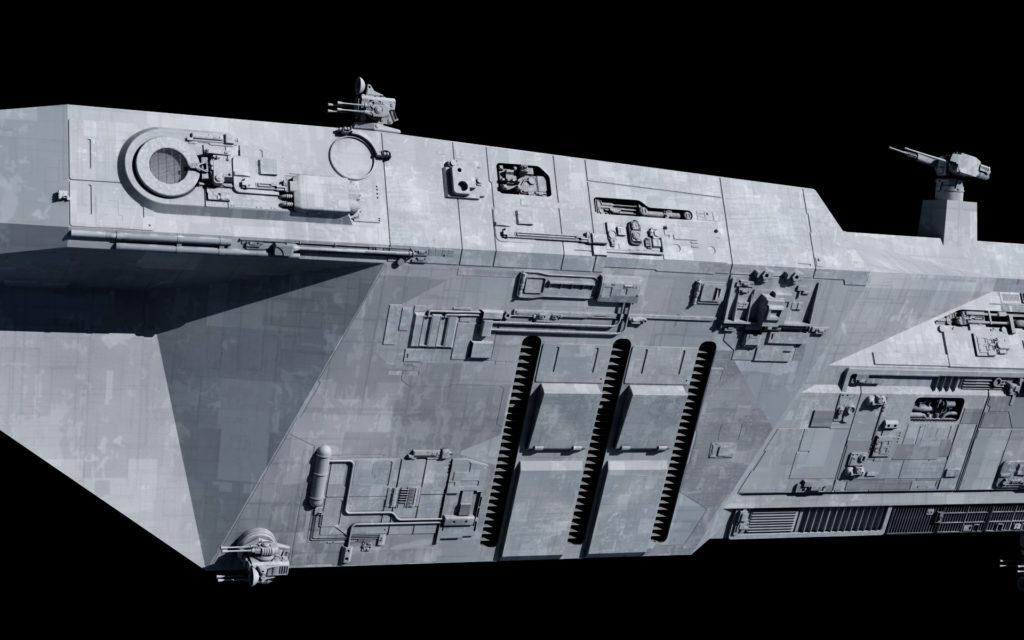 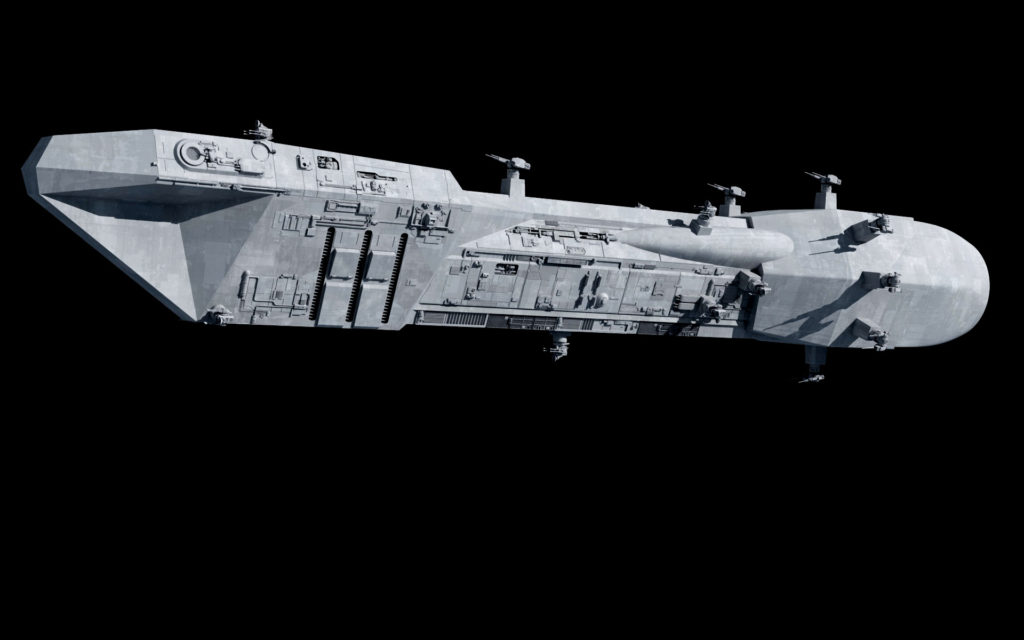 I’m so glad FFG decided not to do this and made the Raider instead. Fractal’s skills are amazing, but the thing looks like C-3PO’s donkus.

I love the interior details on the bridge!

By the way what is this ship’s use?

Wow awesome detail on the bridge!

Very nice. It almost looks like it could belong in the ocean as a surface ship…

That bridge detailing and lighting is great too. Illustrates the scale better than any other cues.

Any chance you’d consider pulling the LTL stalks at 3 and 9 o’clock (looking bow to stern) forward to the aft most part of the forward hull? Or maybe just behind the notches in the bow? Visually I think it’d look better, practically it’d help because I can see taking a solid hit to that cluster of LTL would take down probably 3 towers and a good portion of the ship’s offensive capability.

The angular cut-out in the bow appears to be a shot-trap of sorts, will there be something in there on the end product or will it be a part of the ship’s aesthetic?

I was just thinking the same thing, perhaps a pair of medium turbo’s to give it a bit of an anti-ship punch or something. Otherwise its a nasty dead zone. The ship looks amazing though! Superb work as always!

What dead zone? If you can see a turret in that shot, the turret can shoot you. How many turrets out of 20 can you see in #12? I see 9, so half the armament can bear on that quarter. Unless you mean having a fighter get into the recess, STOP, and then avoid getting squashed when the ship moves. Even then, the chin quadlaser can actually sweep the entire volume of the inset.

MTLs are beyond the role of the ship. I think if one assumed maximum possible power density it is possible – the ship is bigger than an Aiwha after all, but it’s not really an alpha-strike kind of ship. Better to spread that extra power across more dual-role LTLs, which I’ve done by swapping half the point defense lasers for half LTL/half heavy laser mounts.

I’d go even further than that; the WEG write-up specifically states that all the quad-lasers were mounted on towers extended out from the hull, giving each mount a greatly increased field of fire. Of course, then they gave it game stats where the guns had the exact same fire arcs as the guns on every other ship, but hey, that’s WEG.

Ahh I missed the low down lasers on the forwards hull somehow! And going for a mix of light turbo’s and blasters makes more sense.

I’m not sure the concept of the shot-trap carries over from 20th century ballistics to gigaton yield turbolasers.

There are more weapons in use in fleet combat than just turbolasers, however. To take advantage of the emphasis on ray shields, the enemy could launch warheads. Maybe ones with delayed charge to maximize internal damage. Or if you are facing some pirate or other factions that utilizes MandelMotors vessels, you literally have to deal with a portion of their mass driver weapon systems.

Just aesthetic. I suppose you could justify it by mass removal to increase performance on the original, but mostly aesthetic.

Does the towers extended and retract?

Not planning on it.

What are the three vertical lines on the bow section?

My guess would be heat sinks.

I’m loving those two decks of windows at the bow, with lighting inside and everything. Most of these long, narrow Imperial frigates and cruisers (Gozanti, Lancer, Carrack, Dreadnought) don’t do much for me, but the detail you’re putting into this has me thinking this could still be a damn cool ship once you’re finished with it.

She’s lookin’ real nice man! Definitely a ship I would be more than happy to Command~