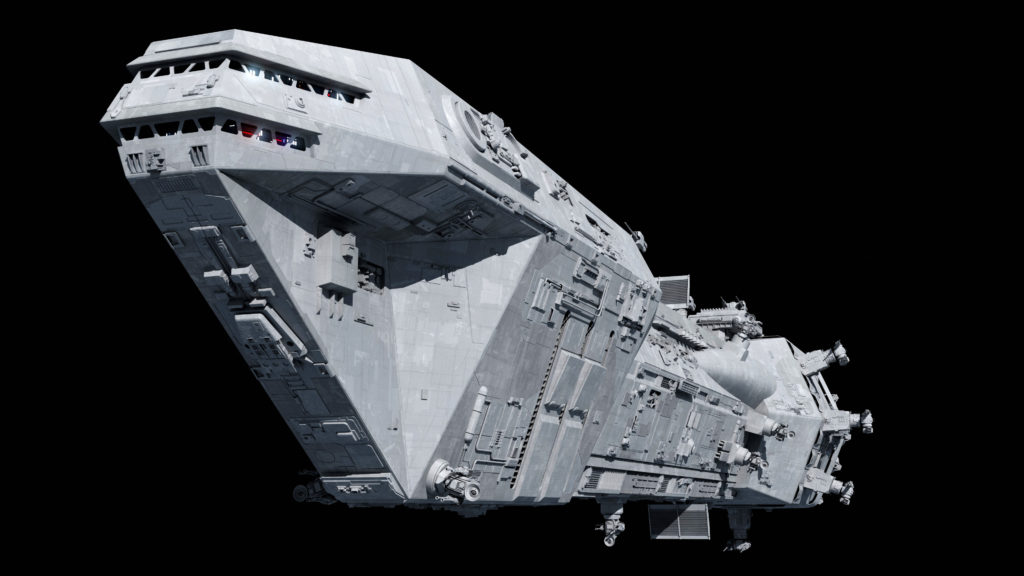 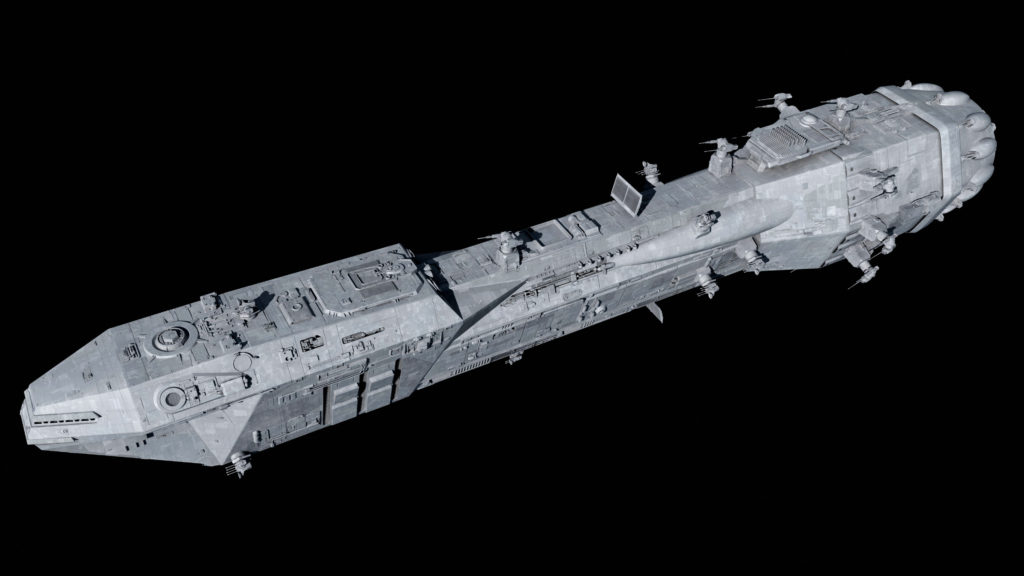 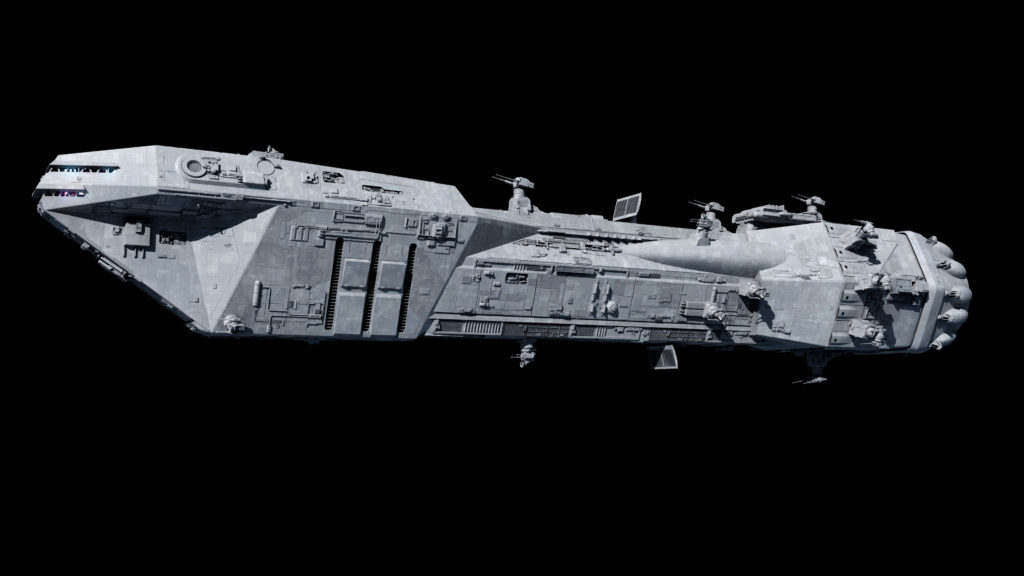 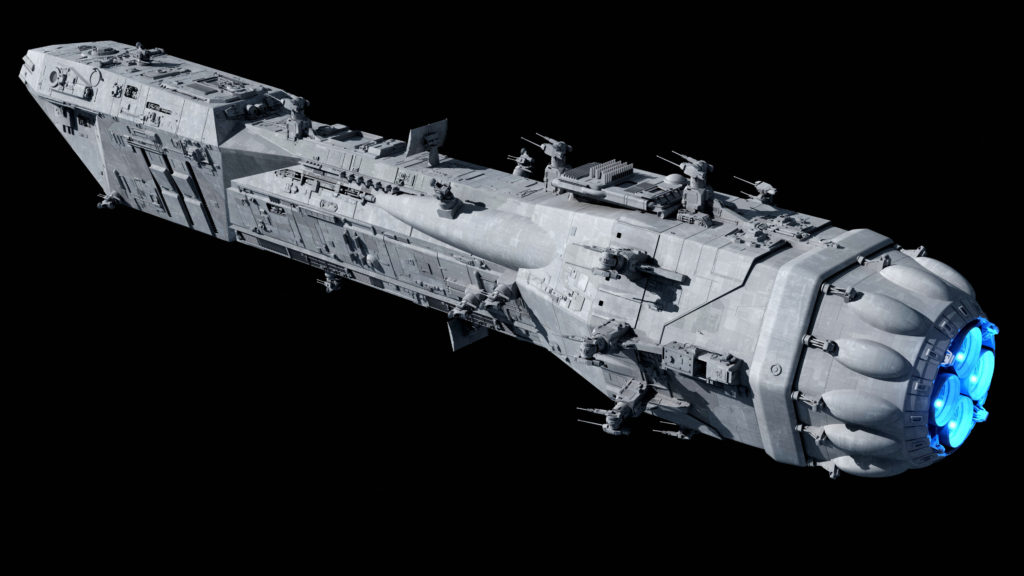 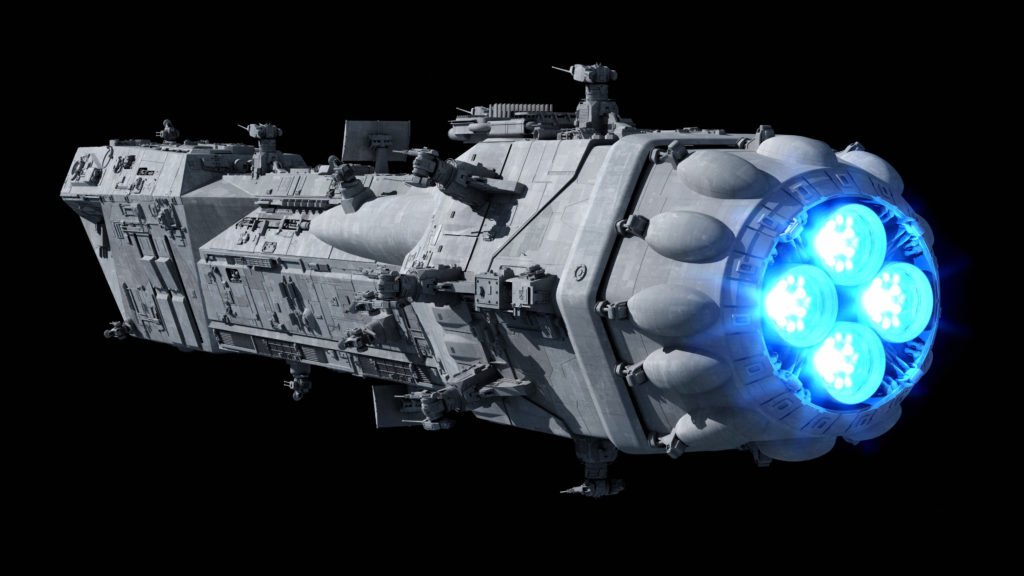 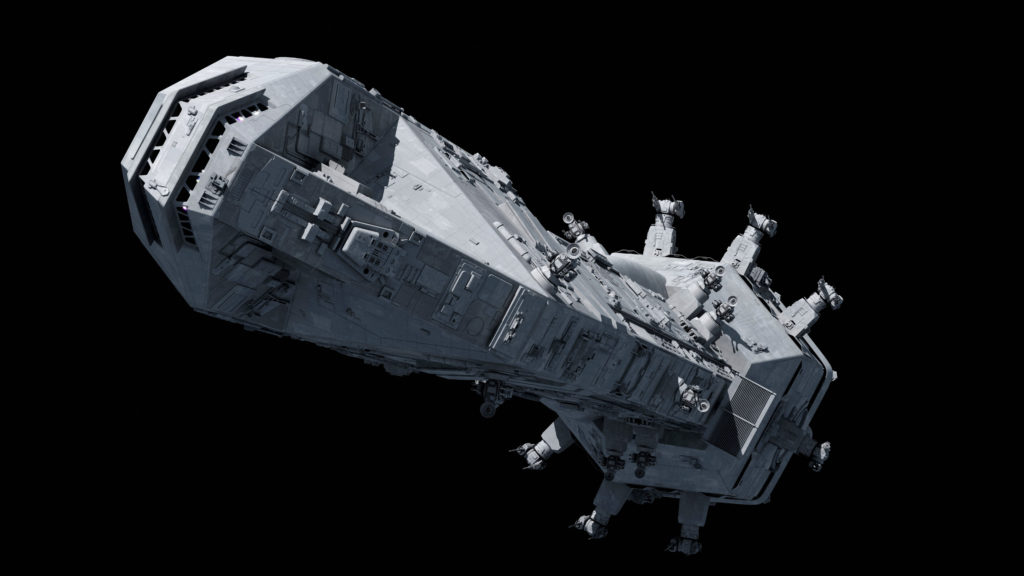 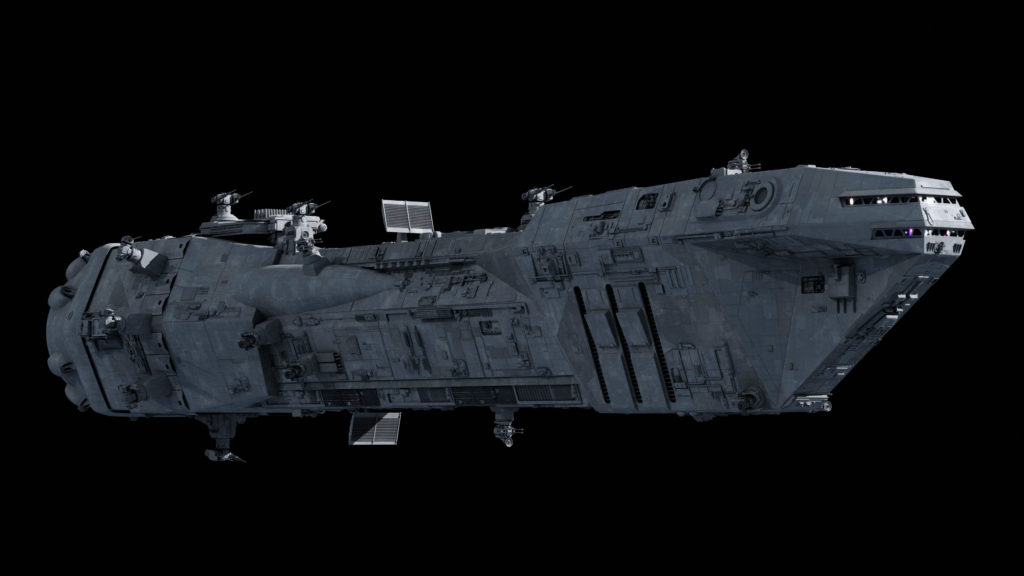 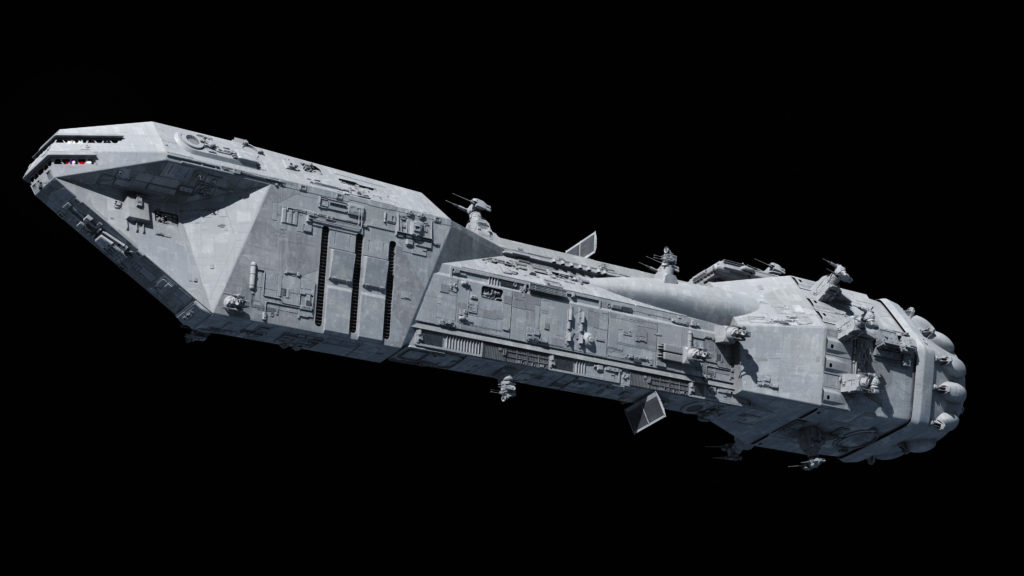 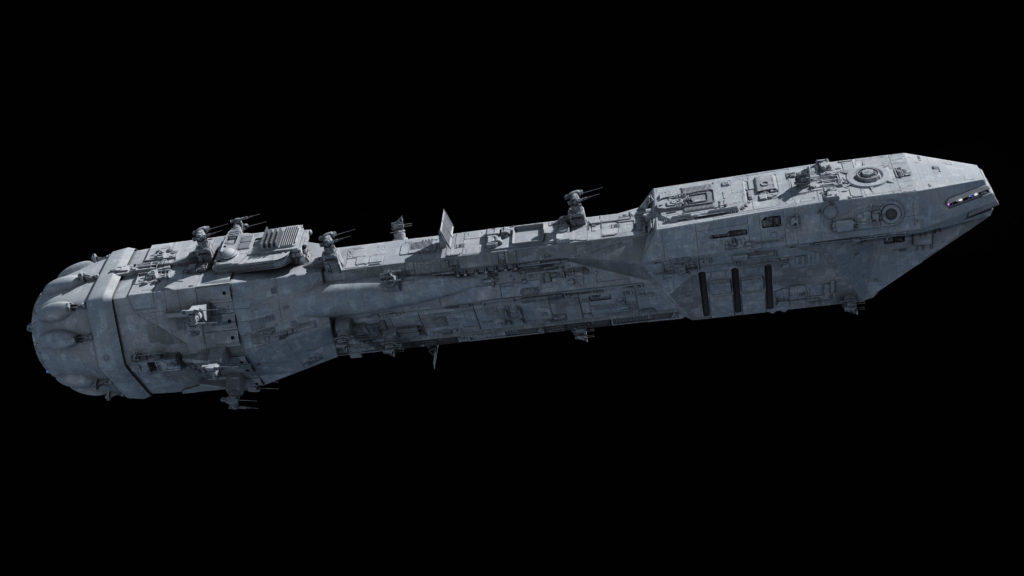 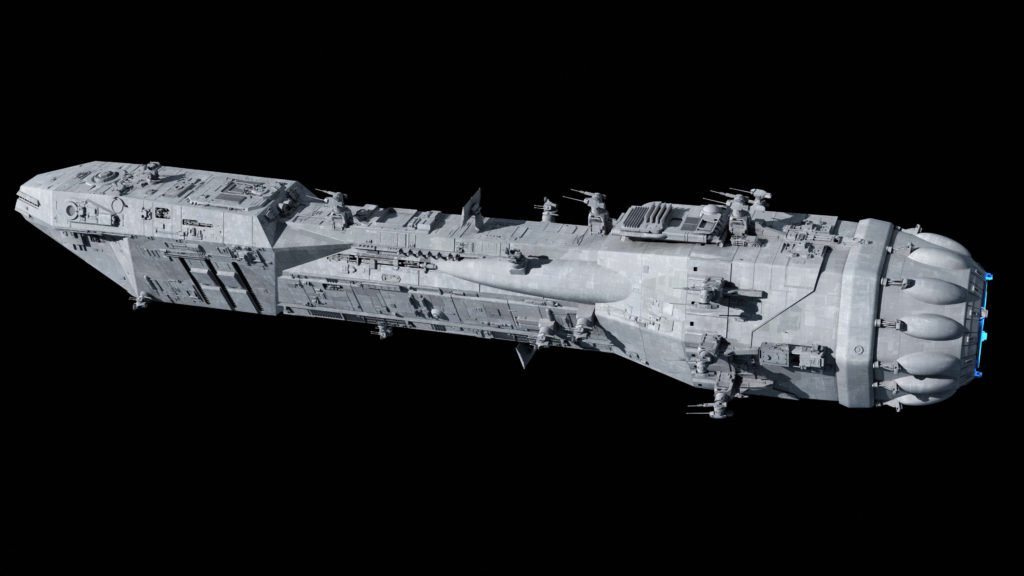 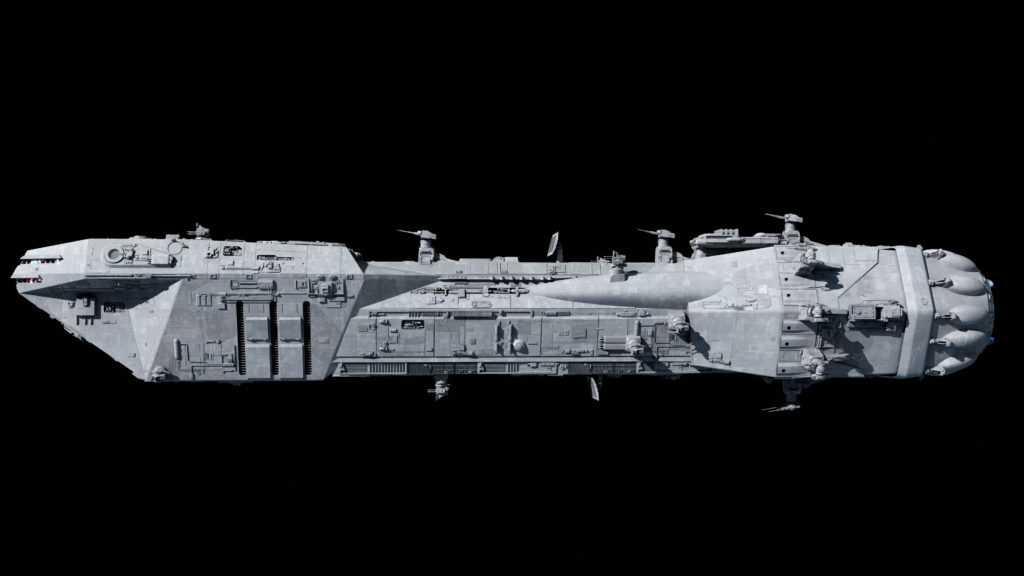 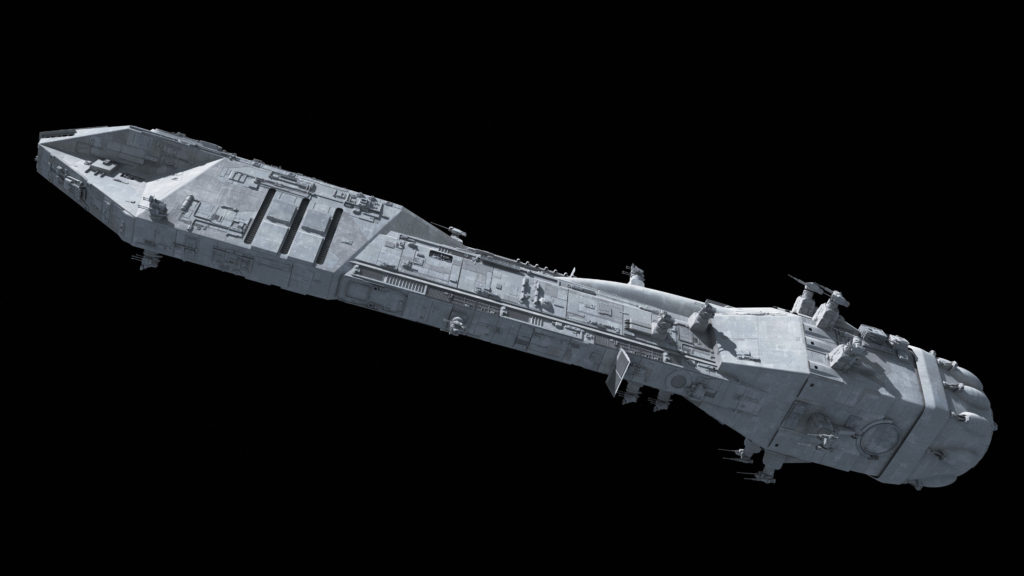 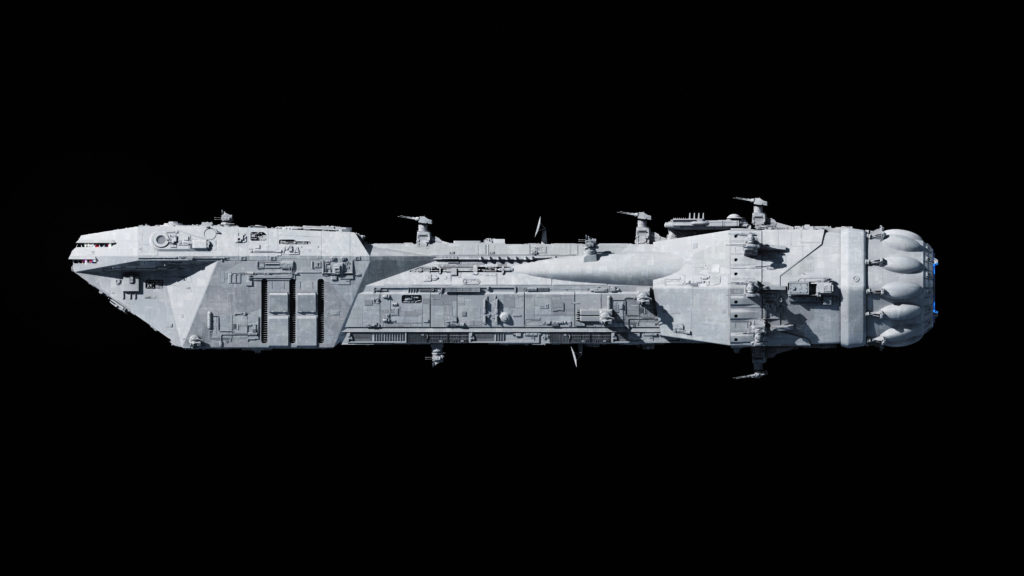 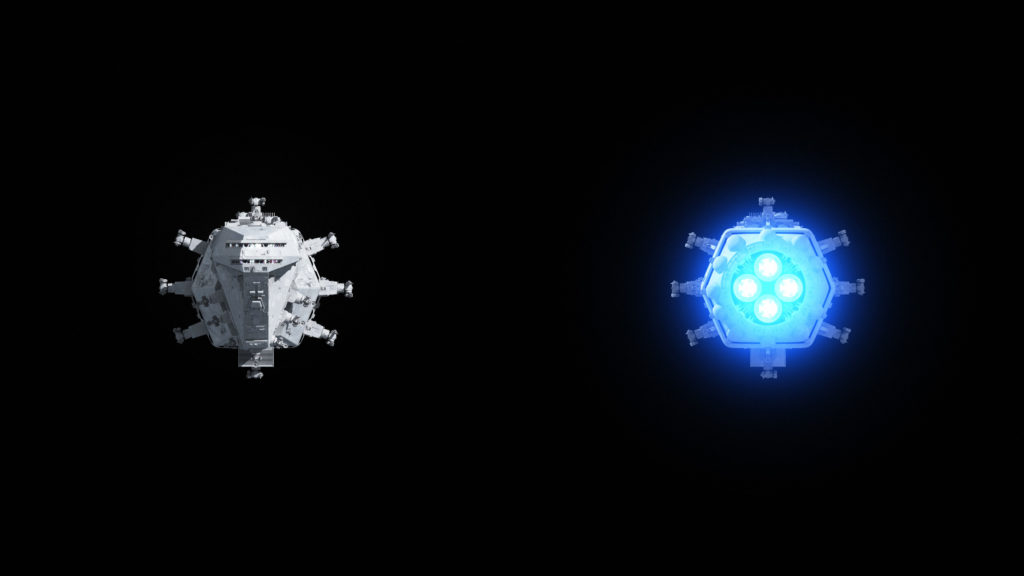 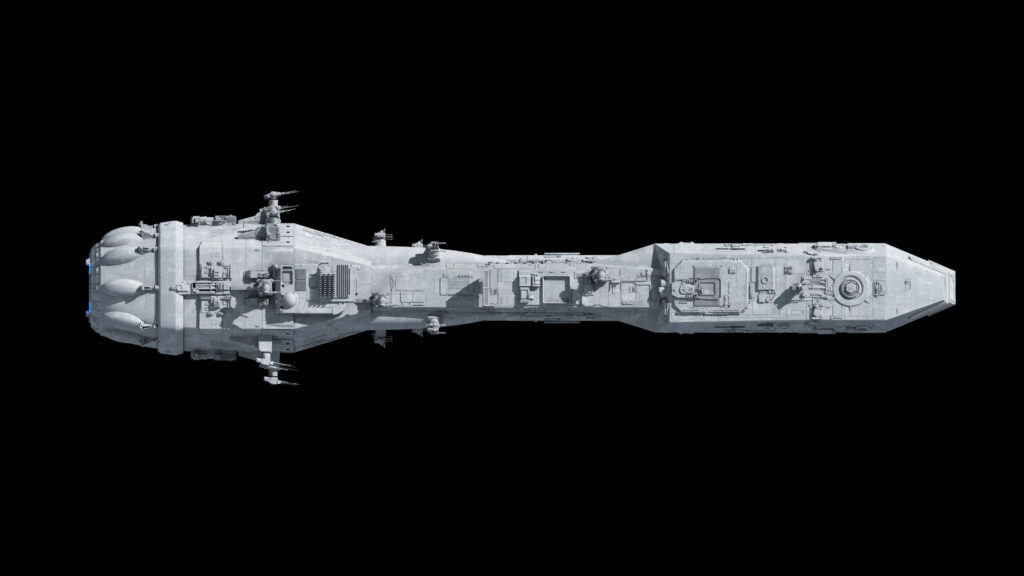 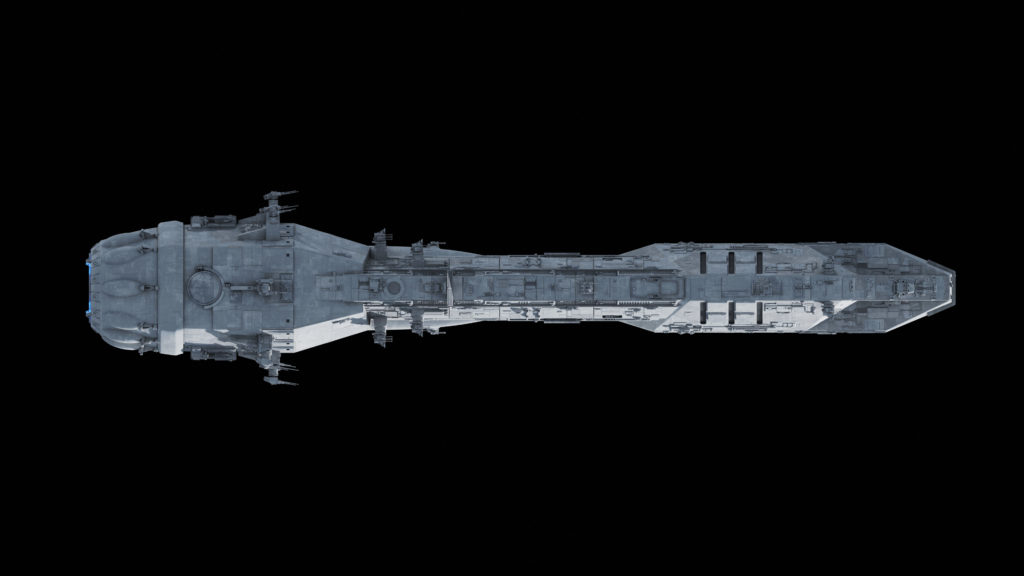 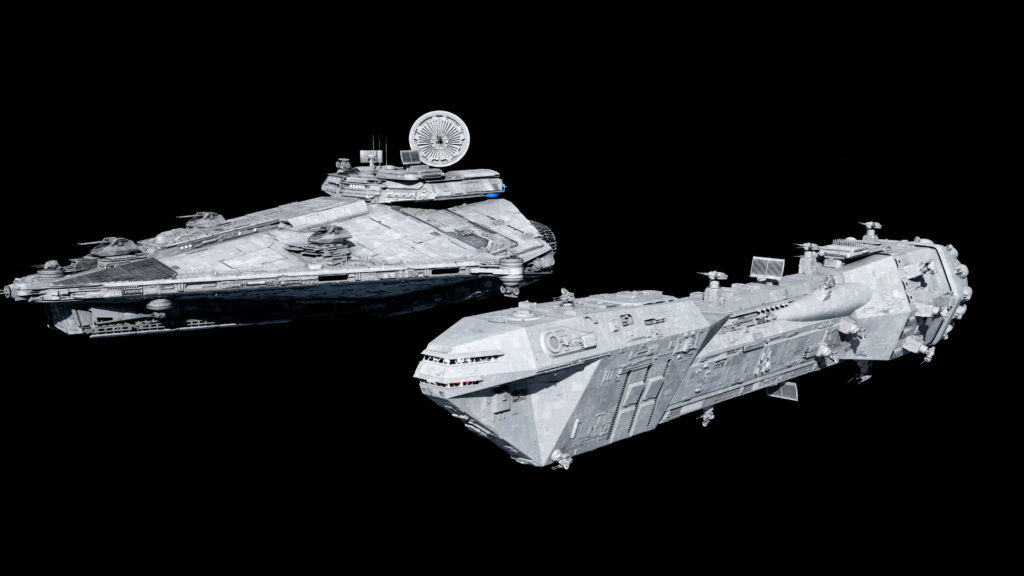 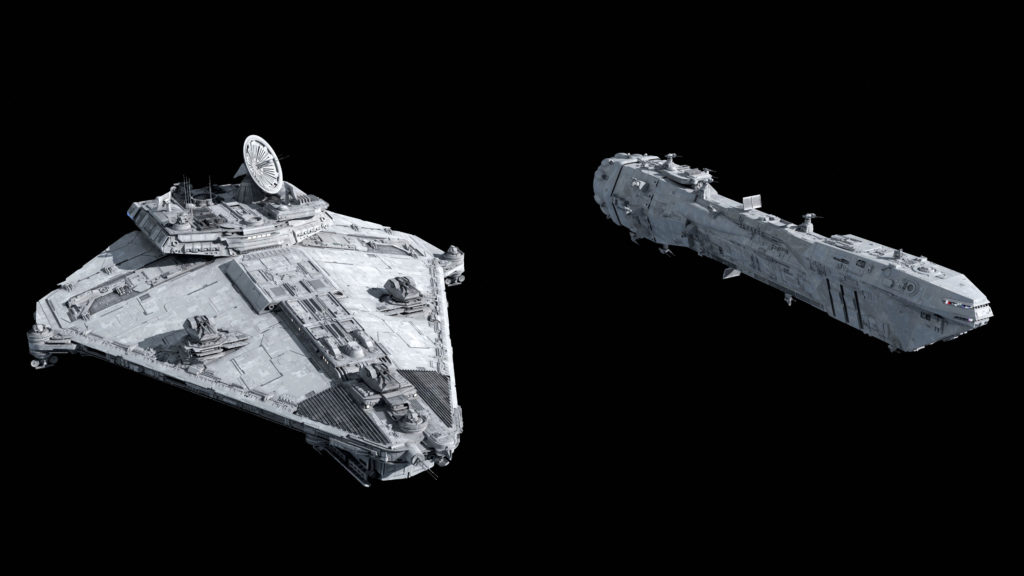 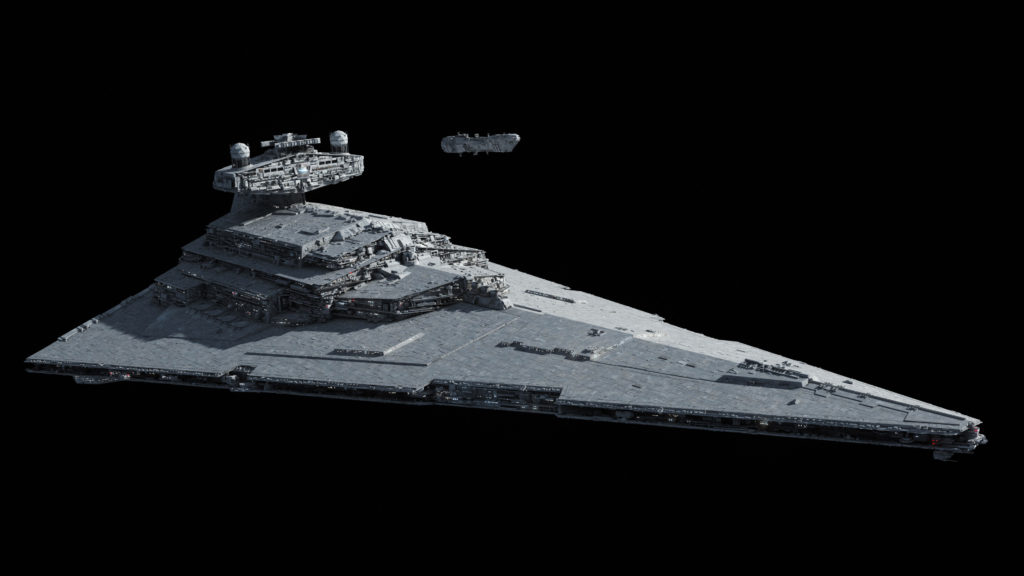 Does it still have cc for 2 shuttles internally?

Love the model but isn’t the lancer supposed to be armed only with quad laser cannons? That was its weakness, limited armament specialized for anti fighter intercept with no capability against larger vessels.

The Lancer is highly modular and can be fitted with a variety of weapons systems. Imperial models commonly but not exclusively used a quad laser cannon arrangement for point defence

Yet ANOTHER truly outstanding ship design and again excellent engine after glow effects! I especially enjoy how you can see the “star/sun glow effect” on the left aft 3/4 view of the Lancer Capital Ship! This is to drool !

I used one of your models for a picture I made. Thank you! Can be found in link.

The skewed angle seen in the 7th picture really give you a sense of a nimble warship banking away to intercept a swarm of alphabet fighters!

If you have the time, could you do a render with this Lancer beside the Velox? I am trying to picture the dimensions in my head, but can’t …

It look like it was change because you said the Velox was going to be 320 meters in length when you were making it at ‘Light Frigate WIP #1’.
Proof source: https://fractalsponge.net/?p=1898

I think a comparison with that Container Transport would be good too. I could see that being a useful paring in areas where pirate activity is slightly more likely but not so common as to require bigger escorts or a convoy.

This is a very nice design. I’ve always thought Rebel fighters better look out when they go up against a Lancer–essentially the B-29 of Imperial cruisers. Love your updates to it, as well. Good choice for a project!

In the old Flight Simulation games like X-Wing vs TIE Fighter or X-Wing Alliance the Lancer was one of the biggest nightmares the player could run into if they weren’t sitting in a TIE Defender or a B-Wing because it would greet you with a storm of Quad Energy bolts that went through shields like butter. TIE Defender and B-Wing only gave you better survival chances due to better agility or tanking options.

I really like this interpretation. Looks way more like a fast attack corvette as the original design. Slow ships can not hunt starfighters. Looks more aggressive too.

I would love to see what Howard Day could do with this.

Does it have a hanger? if not what is that device in front of the sensor disc midship?

It properly be just a greeble.

I think you guys sometimes give me too much credit for preplanning. It’s just a greeble 😛

I considered putting some semi-recessed racks, but the design is so narrow as it is that it doesn’t make much sense. The forward hull tapers to ~7m width – about the width of a TIE fighter, leaving very little room unless I wanted to flare out the hull or change the design, neither of which I wanted. It’s a specialized small ship, leave it be.

An internal hangar would be crippling to power density, but external racks à la Gozanti might be viable as a field retrofit.

I mean the thing’s specialty is fighting starfighters. What does the Lancer need with TIEs? It’ll probably be protecting ships that have hangers of its own.

I could see a handful of rack-mounted recon drones for advance warning WRT targets & stuff out of its weight class (I.E. anything corvette-tonnage & up).

Nice to see this done, but I wonder why the title is just called Lancer instead of Lancer class Corvette or something?

Because I don’t want a 30 page thread in comments about Anaxes and EU ship classification dogma?

You hurt our feelings… you expect only 30 pages. 🙁

But I wasn’t going to bring up the Anaxes and EU ship classiflcation let alone a 30 page thread which I don’t know about.
But I understand what you mean and I’l respect your decision Fractal.
Although Fractal earlier you did say the Lancer was not big enough to be 2/3 the volume of the Vigil and it would be a Medium Corvette instead of the Frigate so I will go with your Medium Corvette idea instead of the EU’s Frigate idea.

In-universe marketing aside, I’d say it’s a medium/light corvette on my naming scale. By volume it’s more like 35-50% rather than 2/3 Vigil scale by volume at the end. My design is relatively narrower than most Lancer depictions, so that helps that as well. Helps sell the idea of why it wouldn’t mount MTL, for instance (at least beyond the designed role).

How do you think the original, purely anti-starfighter Lancer would stack up against a CR90, which is smaller but actually has turbolasers?

Light craft are a bit weird in terms of exactly how much power you’d expect them to have. My guess is that it’d go to the old Lancer in a straight slugging match – it’s just a much bigger ship than a CR90, and it does have 80 lasers, which even if they are only fighter-grade seems to be enough to sandpaper down the corvette, which in a lot of media seems to be vulnerable to just fighters shooting their main guns.

Praise the Omnissiah! The guns are symmetrically mounted. I know its bizarre that I get bothered by such things, but I do. Excellent model! Three cheers for Fractalsponge.

I spoke too soon…That midship gun is off centre. The omnissiah is displeased, quotas will fall short this year and I shall be recycled into a servitor.

Off center so they can both fire ahead. Or would you prefer one get obscured by the other?

Could they not be super-firing?

Sure, then the one furthest back is sitting on a crazy tall flak tower, and you no longer maintain the radial symmetry of the ring of towers around the engine block. I think it looks better this way.

Hey man, you’re the artist, you do what you feel like! I don’t expect you to pander to my idiosyncrasies.

This is cool! So, primary role is anti fighter correct?

It’s literally it’s one and only role.

LTL can still threaten other corvettes.

Lancer-I (all quad lasers, crap engines, crap shields) was a dedicated anti-fighter vessel which didn’t fulfill the fleet escort role the Imperial Navy needed it to.
This is Lancer-II, Fractal’s massively upgraded multi-role version capable of engaging enemy fighters at longer ranges, keeping up with the ships it’s meant to be escorting, taking more of a beating, and taking on sloops and smaller corvettes with its LTLs.
Its primary role is still – as you said – anti-fighter, but it is no longer incapable of doing anything else.
This was my inference from conversations on the two WIP pages. Would require confirmation from FractalSponge to be sure.

The difference between a reboot design and a refit/follow-up design is a small one. I’d be quite happy saying it’s a Lancer II, or that this was the original Lancer. Make it whatever you want it to be for your head canon.

My personal view is that the original design was a pre-production version that got forced onto the battlefield before the production lines were secured.