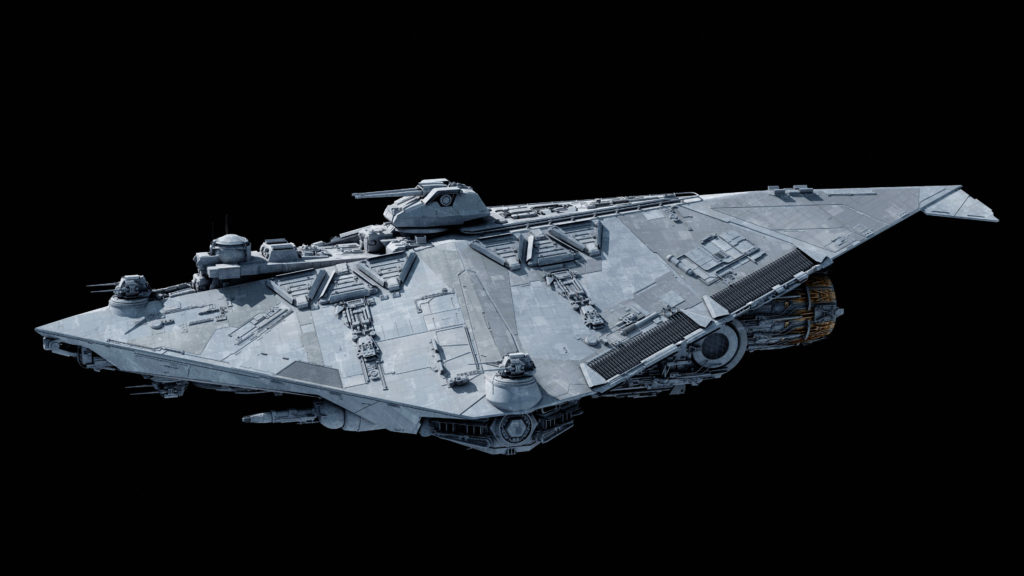 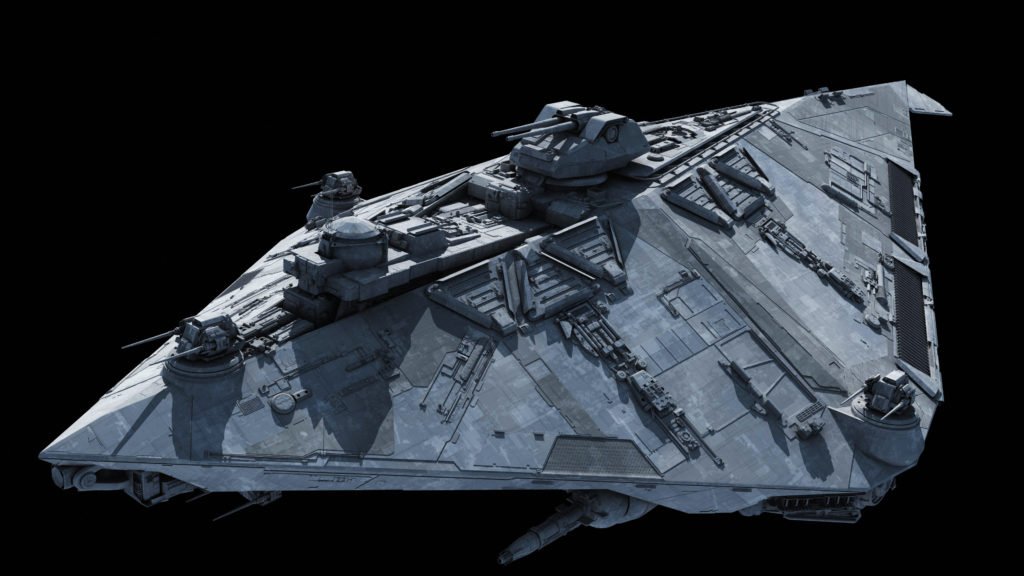 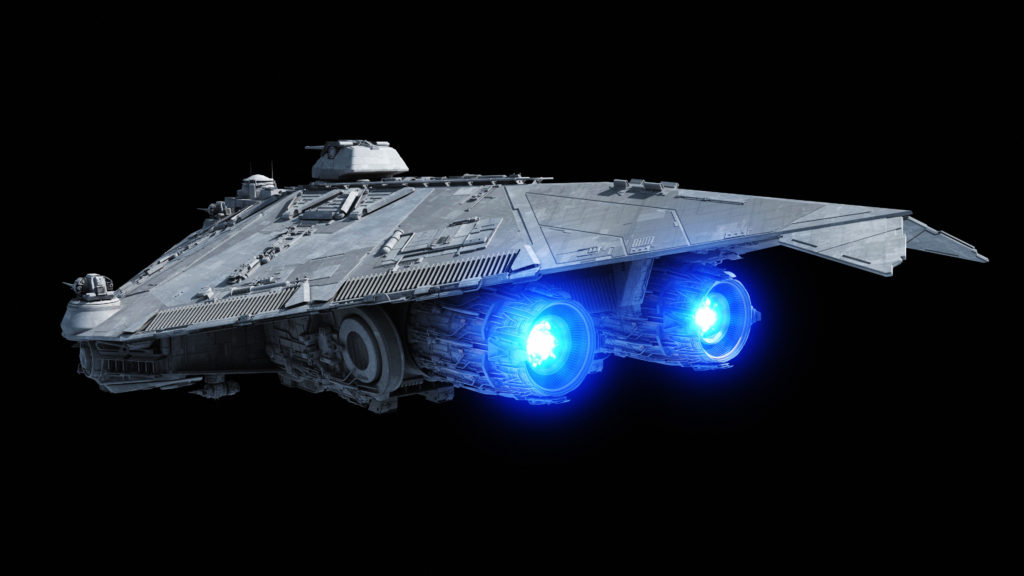 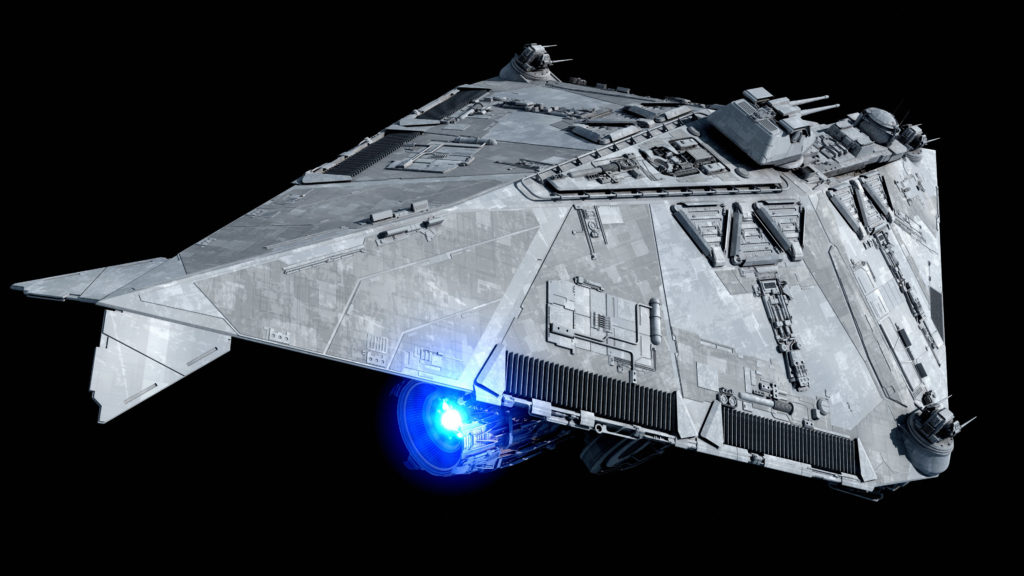 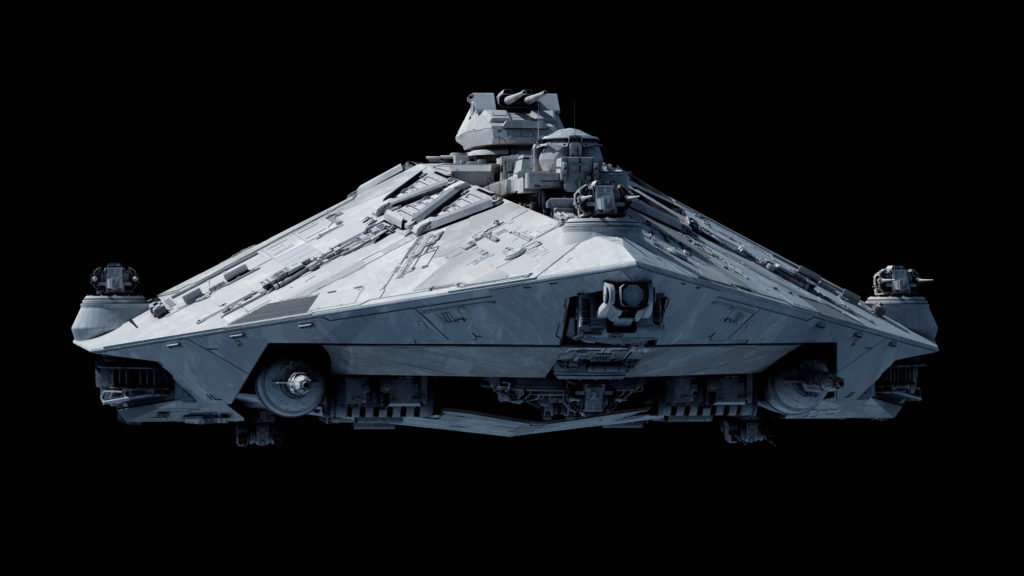 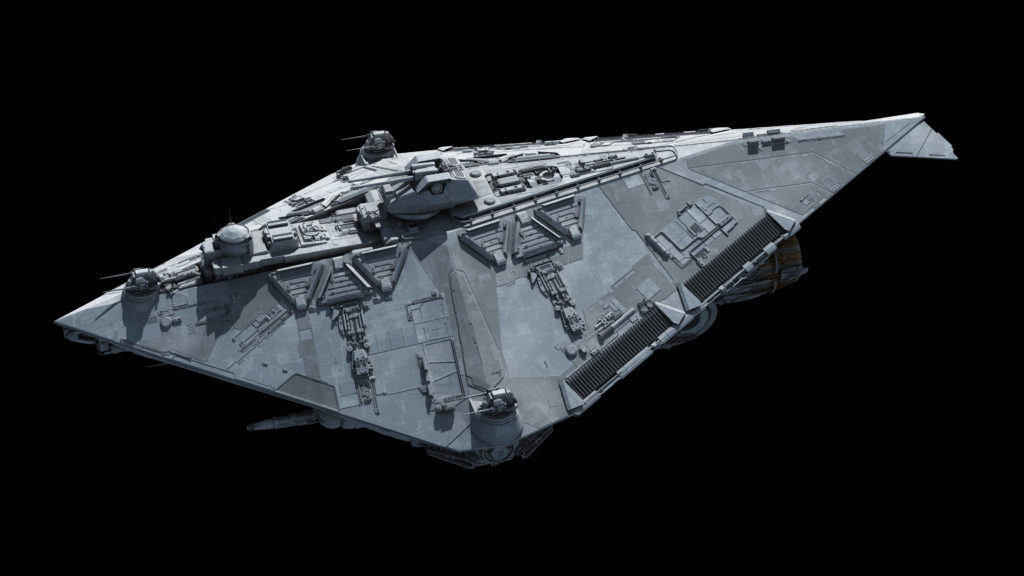 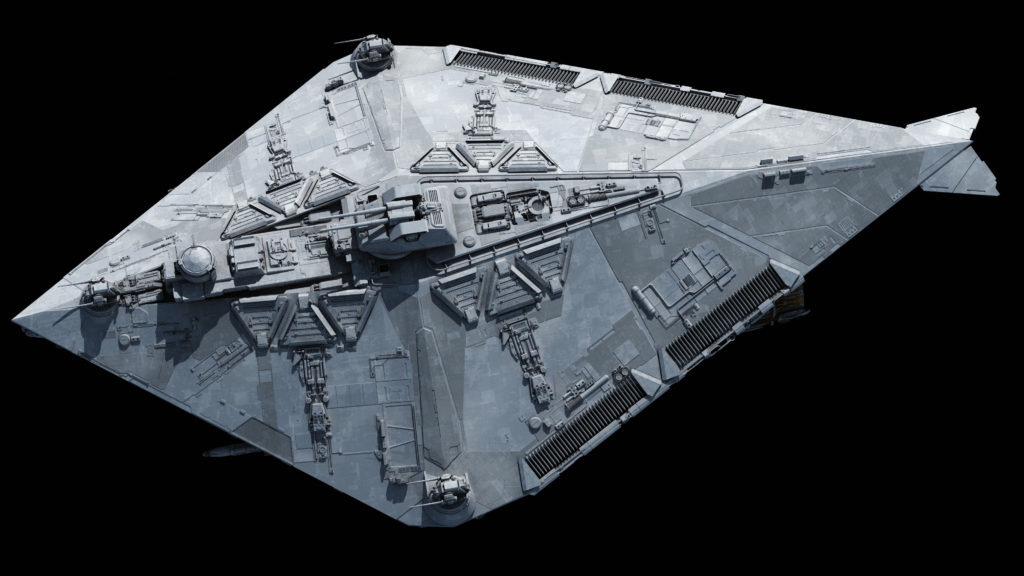 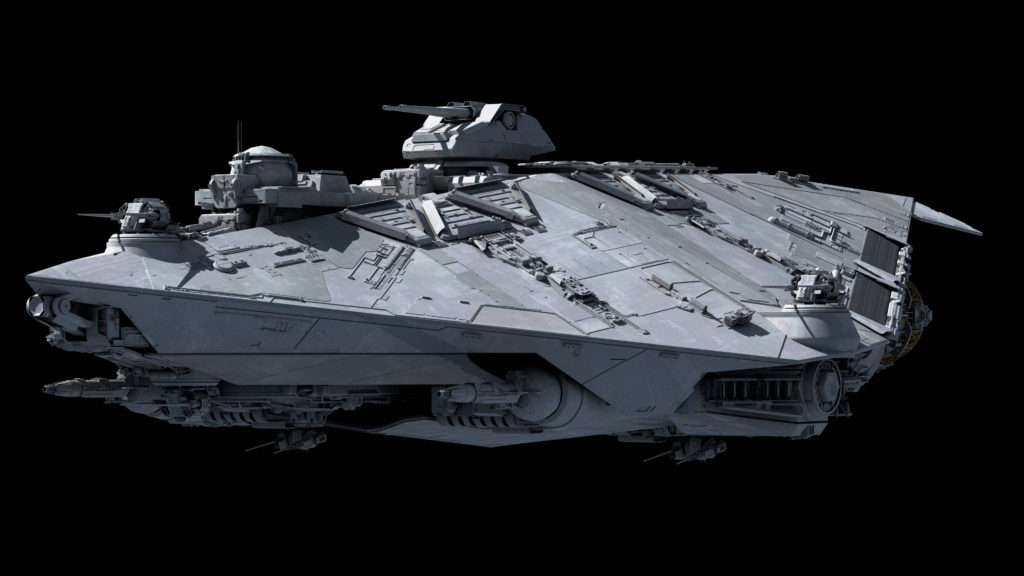 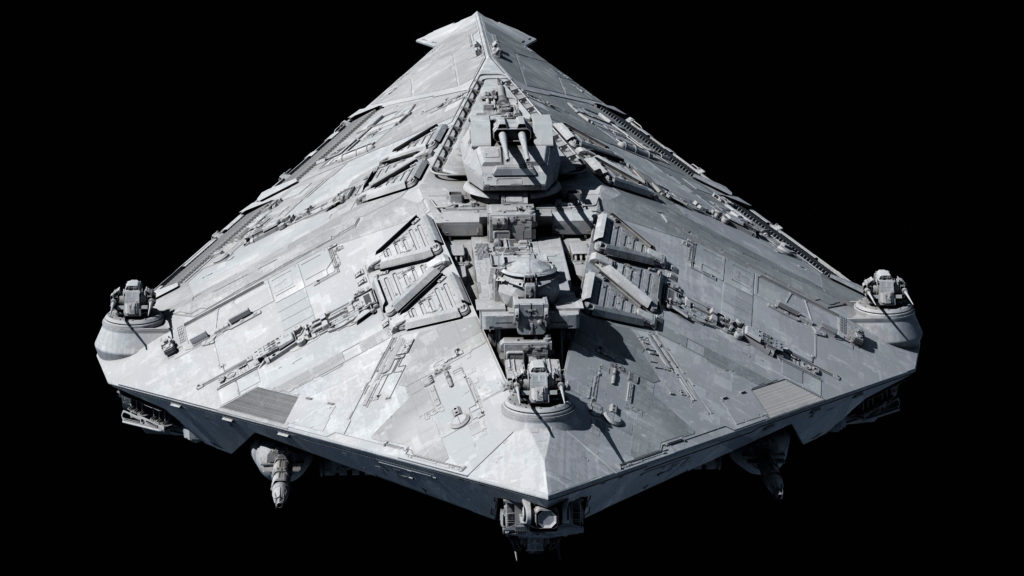 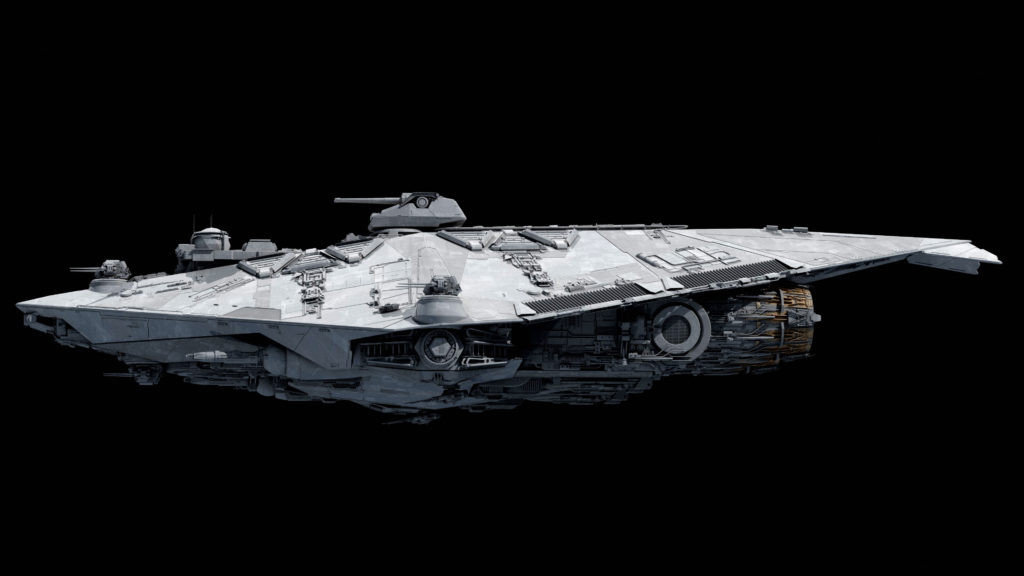 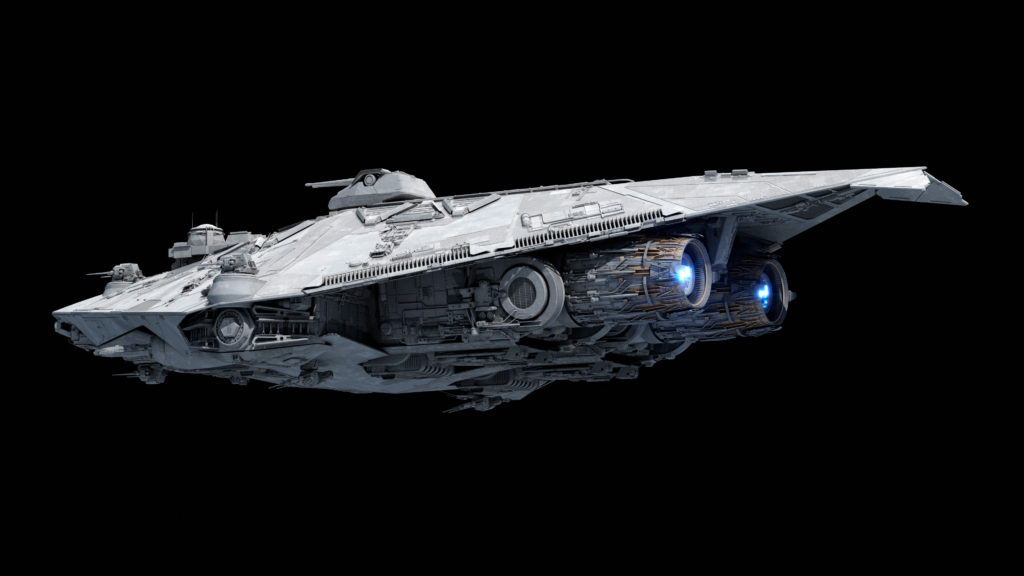 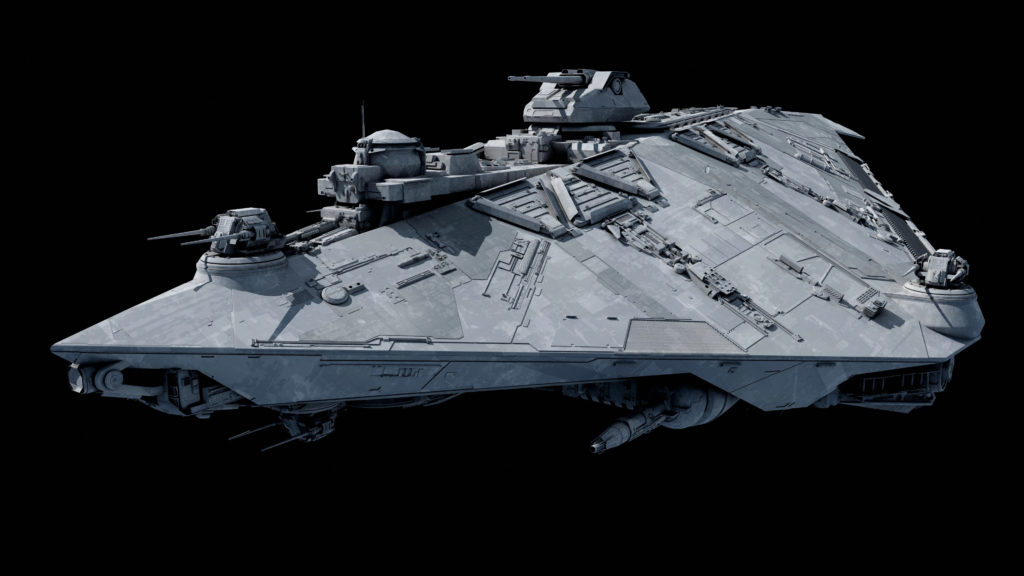 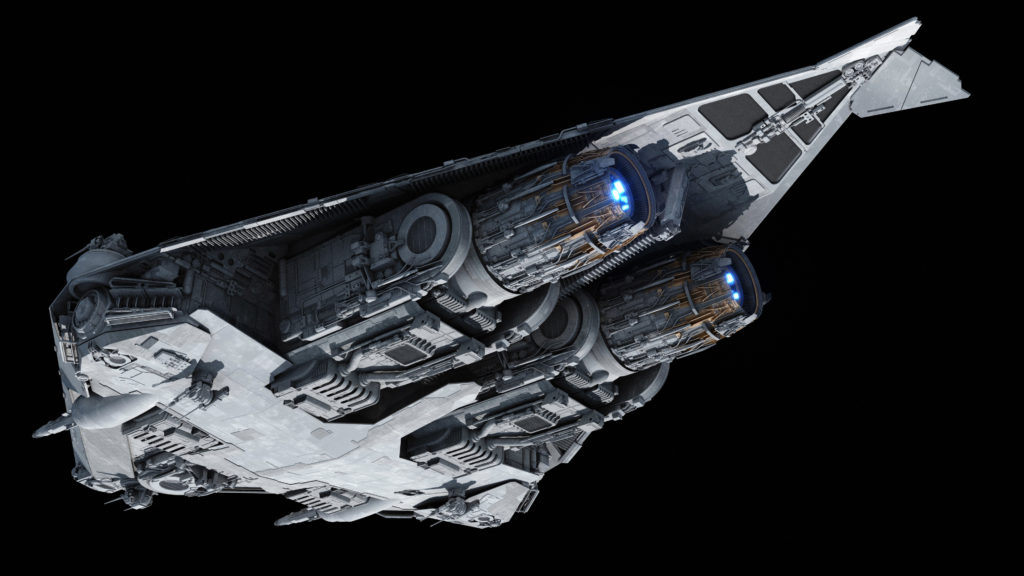 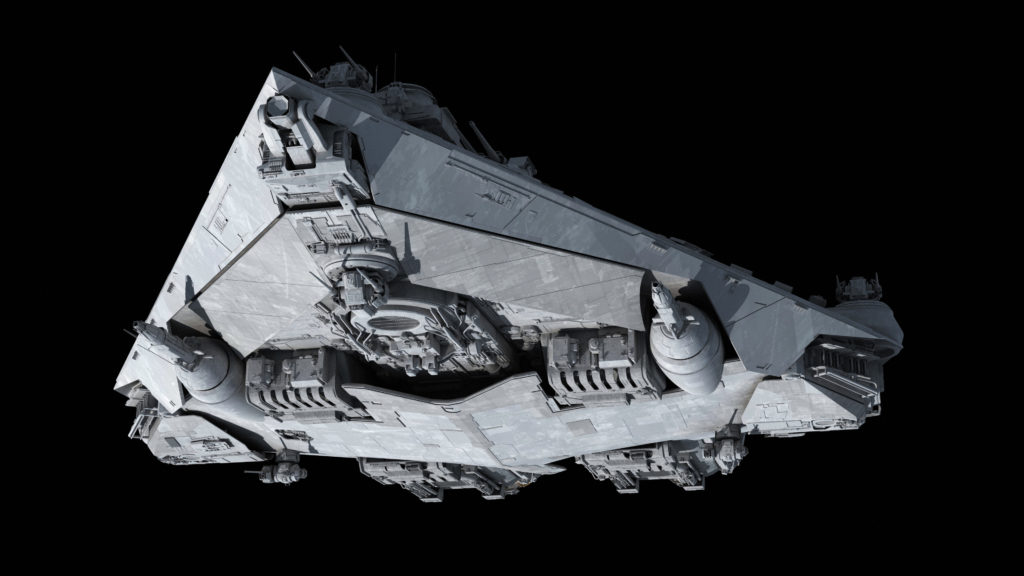 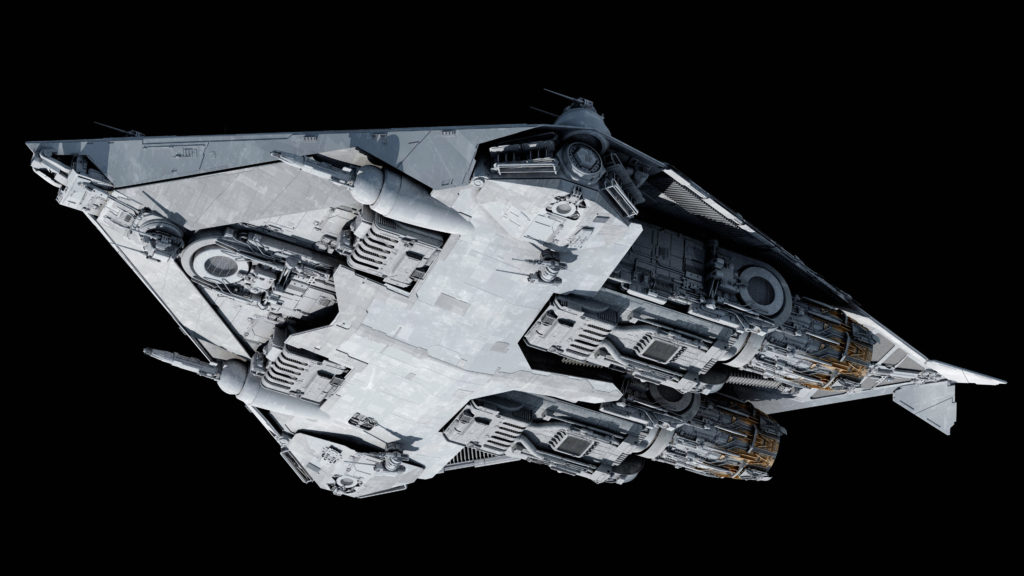 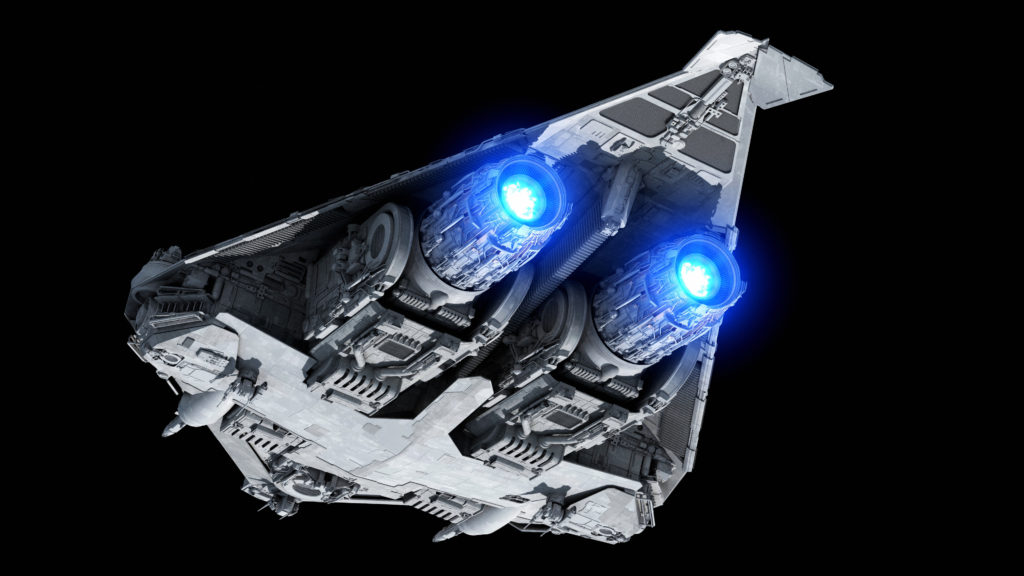 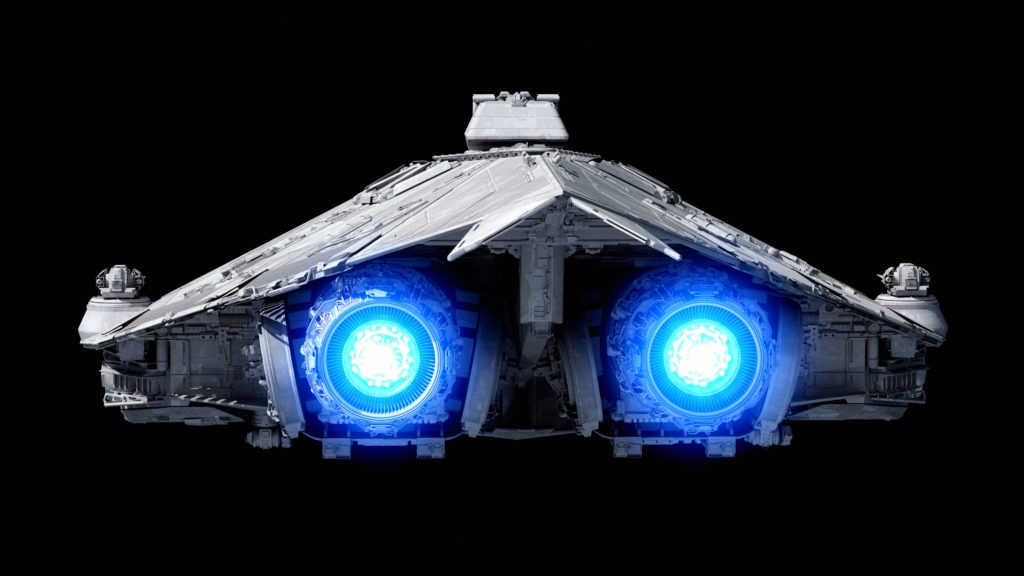 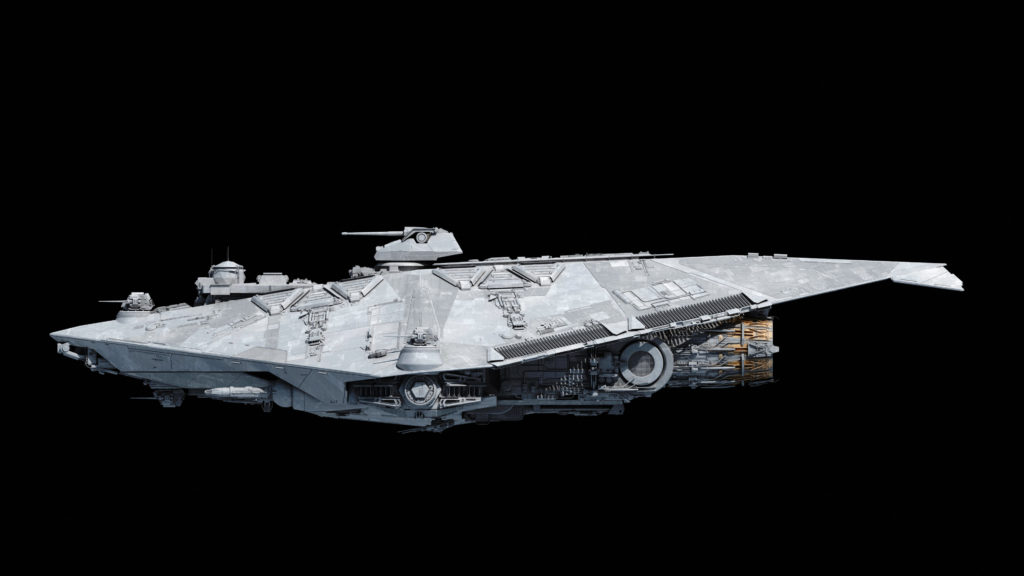 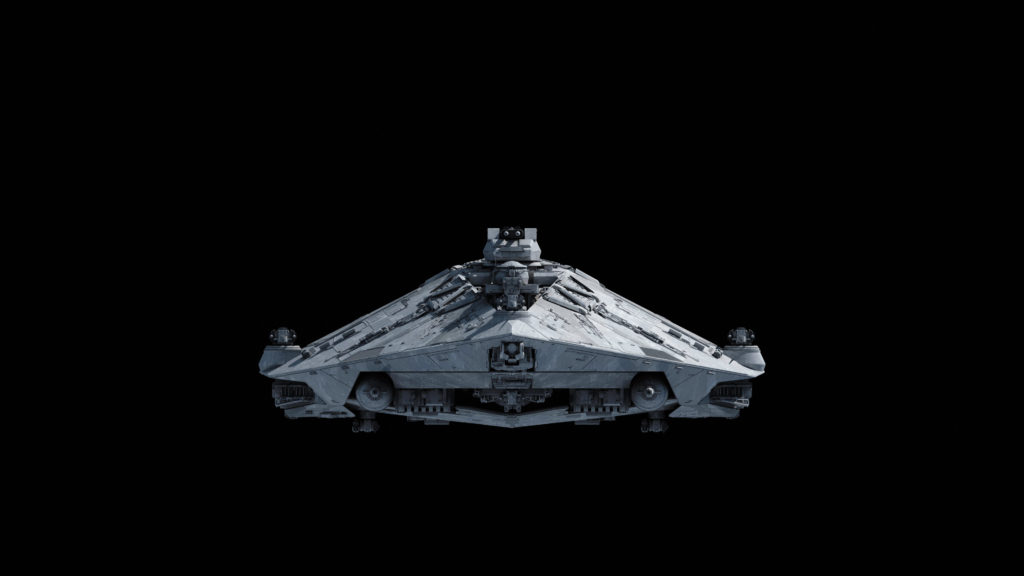 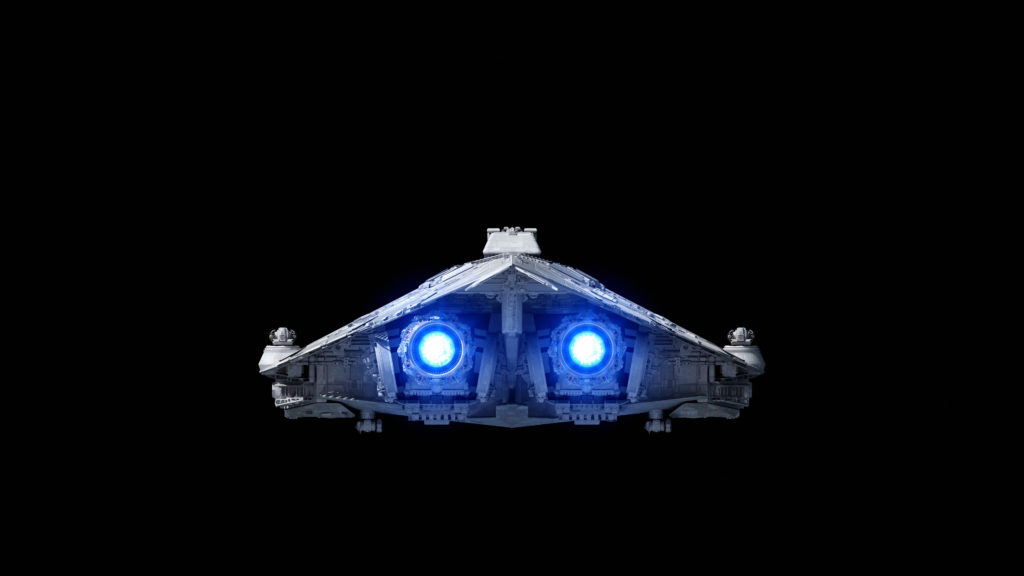 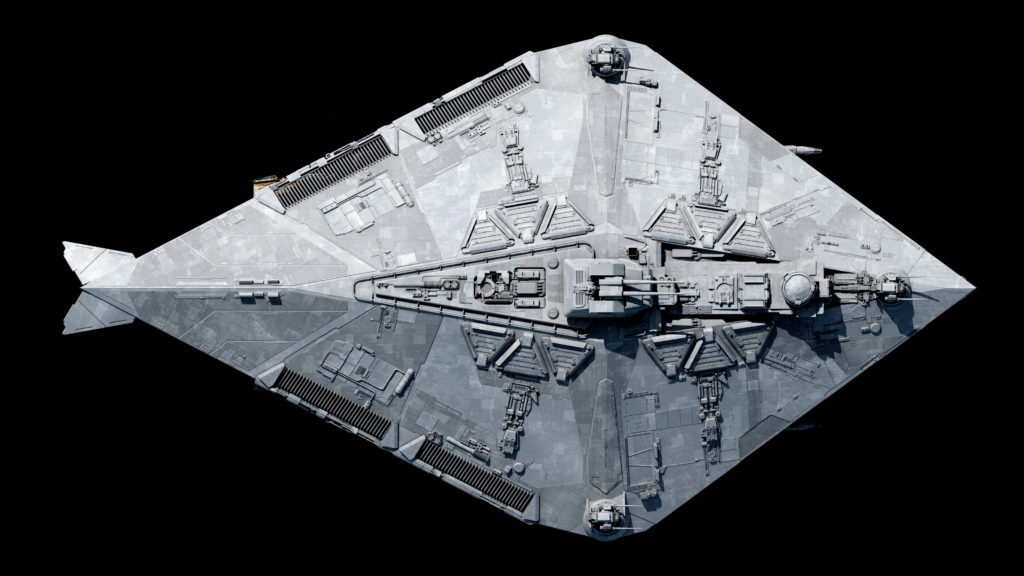 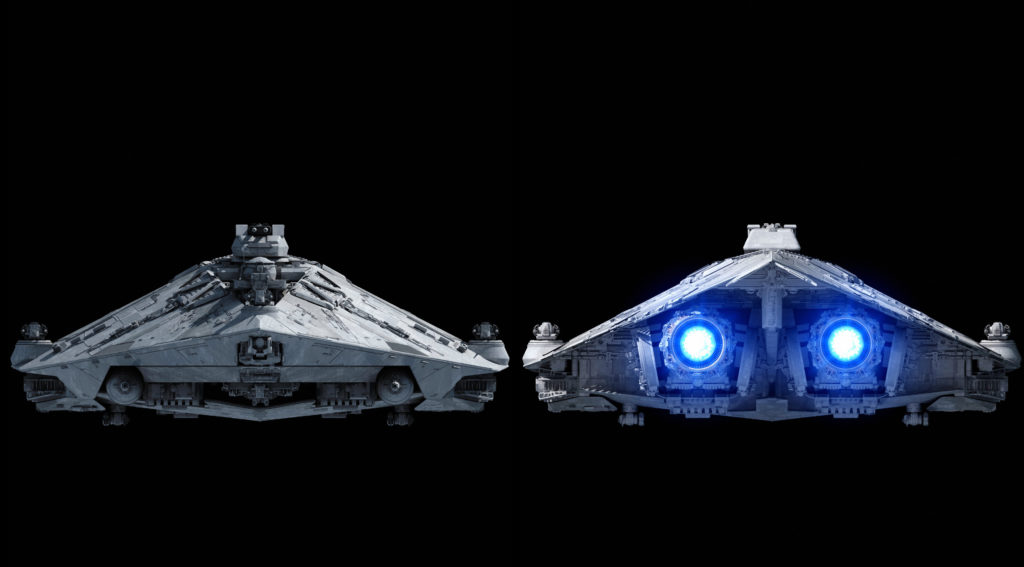 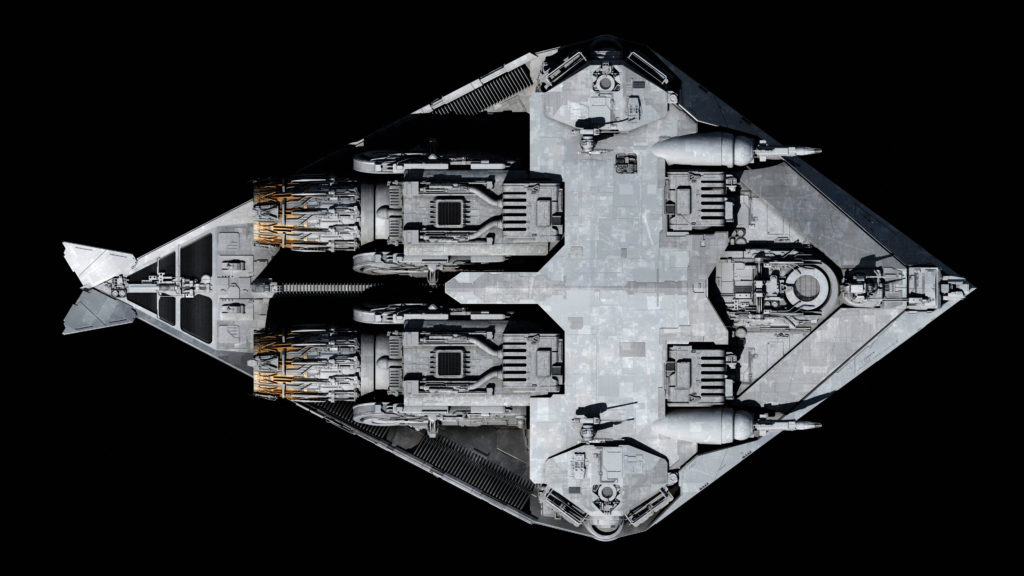 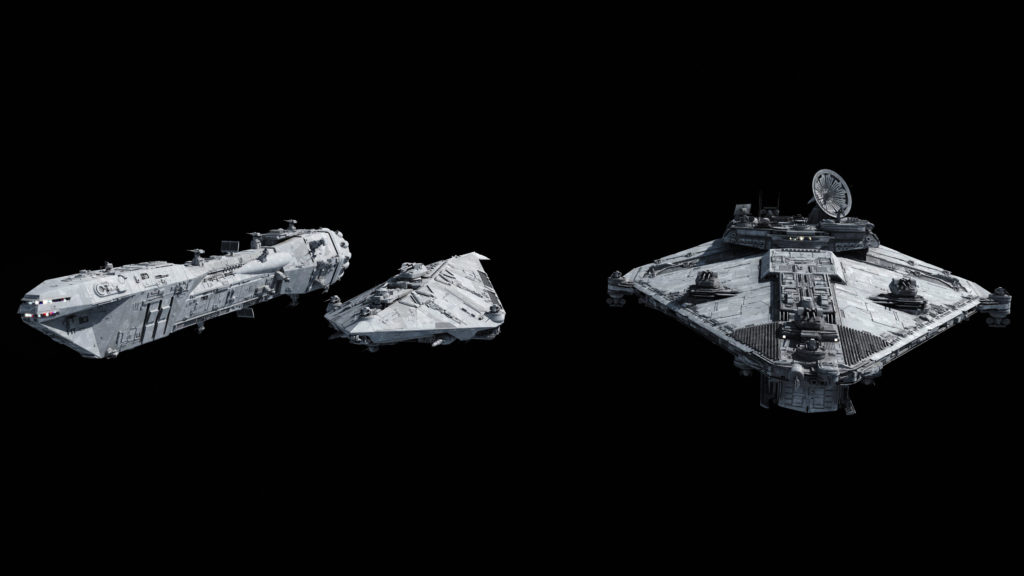 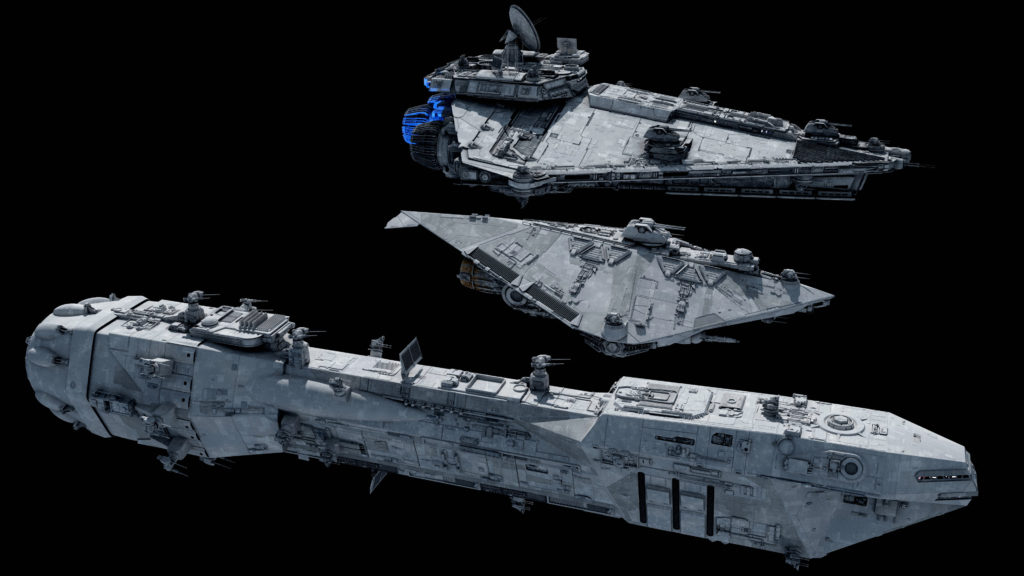 where is the bridge? 🙂

I think it may be the circular tower between the forward twin light turbolaser and centeral twin medium turbolaser turret on the dorsal side. Otherwise, it’s probably buried inside the ship like the Dreadnought.

What did this ship end up measuring out to? I’d heard 150 meters, but couldn’t find anything to confirm that.

Wait can the thrusters rotate downwards?

As 3D artist myself, I’ve never been able to get the sort of blue-gray material with the hull plates. I’ve gone all over google for hull plating textures etc, I’ve got a python script to generator plates and greebles, but where do you get these images from? Would you share them?

Far and away my favourite Fractal design, recognizably Imperial while showing a unique style and design philosophy that distinguishes it from ‘yet another Kuat wedge’.
Surprised there isn’t any landing gear, the flat bottom makes it look like there could be assault lander or boarding craft variants, or even extending their range by riding larger ships like a remora.

Designed by the Loronar Corporation the Aiwha class Corvette was built following the destruction of the Death Star and the pre-eminence of the Fleet Faction that pressed for more warships and less money and resources to be spent on hugely grandiose projects like Death Stars and other super-weapons.

Unlike the IPV-1 class the Aiwha was built to be a fleet element, acting as a picket craft, escort and pursuit ship. Its larger stablemate the Lancer class frigate and Vigil class Corvette the Aiwha was part of a new wave of ships to try and counter the Rebels fighter advantages. The Aiwha is small and manoeuvrable whilst packing considerable firepower onto its frame, making it more than a match for smaller Rebel warships that might be able to avoid the big guns of larger Imperial warships.

The Loronar Corporation crammed a lot of equipment into the Aiwha, including a standard Class 2 Hyperdrive as well as a wide range of weapons for anti-shipping and anti-fighter work. This included a medium dual turbolaser mount, four twin light turbolasers as well as heavy laser turrets as well as a pair of light ion cannons. Unfortunately to fit this as well as adequate shielding, compromises had to be made. The Aiwha carries no fighters and does not even have a docking bay for small craft or shuttles and only has a single docking collar on the ventral side of the hull through which the ship is boarded and resupplied. Cargo space is very limited, and the crew quarters are very spartan and cramped. The large, powerful engines are also exposed to attacks from underneath, and although it is atmosphere capable, the Aiwha lacks a landing gear and is built purely for space operations.

Because of its short operating range and cramped quarters the Aiwha was not overly popular with its crews but they valued the ships firepower and agility in combat with it being able to manoeuvre more like a light freighter produced by the Corellians rather than the more lumbering Lancer and Vigil classes.
Another advantage of the class was that it was cheap to produce. The Lancer required specialised electronics and software for its formidable anti-fighter battery, whilst the Vigil’s electronic jamming suite couldn’t be removed and added to the cost. Both KDY and SFS kept this data close to hand and were unwilling to let smaller yards construct these ships. Loronar’s Aiwha didn’t use any specialised equipment and could be readily built at smaller shipyards with less dedicated equipment allowing them to be constructed in far larger numbers. This made the Aiwha class a common sight amongst planetary defence fleets as well as local security forces.
This proliferation of the class also saw many fall into Rebel hands where they served as a heavy gunship, much like their Imperial navy counterparts.

That’s a nice, well thought out headcanon.
One tiny issue: the model has port and starboard docking collars, but no ventral collar.
Other than that, I’d love to use this background in my fanfic, if I may.

I’ve been asked to do a D6 game stat for this ship, and I’d like to use this as a source, if possible.

And I shall call it “The Whale”.

It gives off sort of a DS9 Defiant vibe, don’t you think?

Nah, the other ship he posted the other day was more Defianty. This just feels like a whale.

“Other ship he posted the other day.” Yeah, that narrows it down…

What are the dimensions of this ship?

The engines on this thing are gorgeous but I do wish it had some windows to give it a more “lived in” appearance even if I do understand the practical reasoning for not having windows.

Now this one looks really small. What is its purpose?
Is it an improvement of the IPV System Patrol Craft?

Is that a pintle-mounted tractor beam at the very front? or just a greeble doo-hickie-dad?

It is, in fact, a tractor beam projector.

awh…. doo-hickie-dad’s are so overpowered. the only possible counter is a thingamajig. 🙂

Are those laser cannons for point defense or turbolasers?

This lil thing looks quite bitey for its size, what is it, 4 medium turbos? The turret and then the two guns one under each ‘wing’ as well as some blasters for anti-fighter work. A good picket and patrol ship.

If I’m judging this correctly: 1 twin medium turbolaser turret, 4 twin light turbolaser turrets, 2 single light turbolaser with single heavy laser turrets (Fractal’s preferred form of point defence emplacement, judging by its frequent use), 2 single light (I think) ion cannon ball turrets (might be mediums, he’d have to confirm), and 1 small tractor beam projector.
For reference, Fractal’s turbolaser grades are based on the stated grades of turbolasers on the Imperial-I Class Star Destroyer cross-section and other visual media where individual turrets are labelled. In these, the centreline triple turrets are medium turbolasers.

For the ISD centerline triples, I replaced them with triple versions of the same kind of gun as in the iSDII main battery. The turrets are in just too good a position to waste on MTL.

The spots are excellent, but unlike an IRL battleship, an ISD’s turrets in proportion to hull size are small enough that spacing really isn’t an issue. Why not mount all the HTL armament in superfiring centerline turrets rather than distribute them on the flanks?

This model reminds me of those caricatures, where people are drawn with enlarged heads and extremities, and a very small body. That and some water dwelling arthropod.

your lack of a job at lucasfilm is disturbing

The Disney-era Lucasfilm is unworthy of his talents.

Yes, they are unworthy of him, but they need him! Apart from the Resurgent-Class (and a couple of designs in Rogue One), most of the Disney-era ships have been naff! ;p

I presume no problem with operating from surface, landing gear ect. ?

No landing gear. It’s a pure fleet ship, and not likely to be seen on independent duties and gendarmerie work and such which might require rough-field landing.

Looks like the lil thing could fit in a star destroyers hangar. I assume she’s a patrol and anti-pirate ship?

He literally just said that it’s a pure fleet ship, meant to operate as a screen for larger Star Destroyers.

I took that as it being assigned to the navy rather than any local forces or ‘police’ elements.