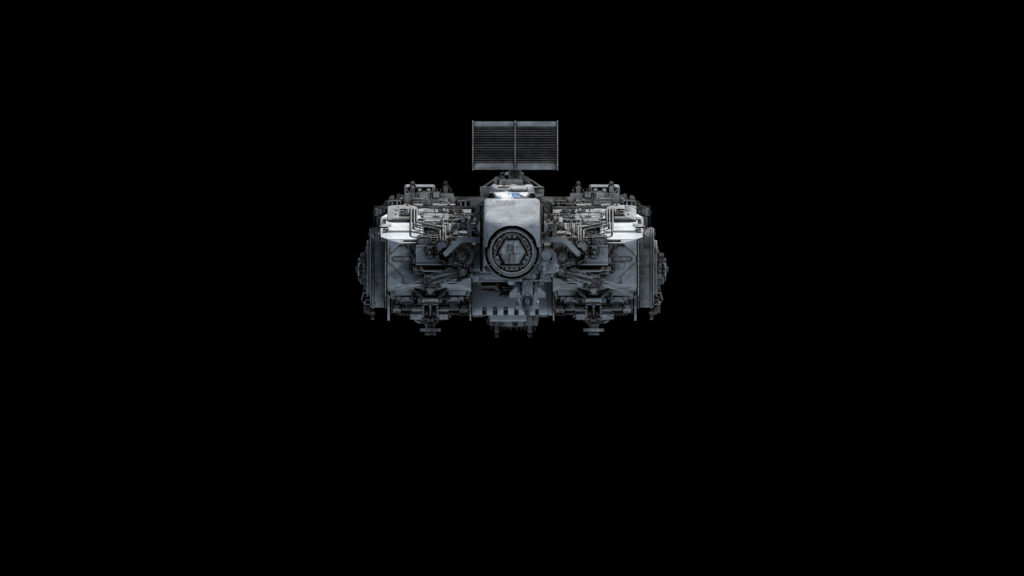 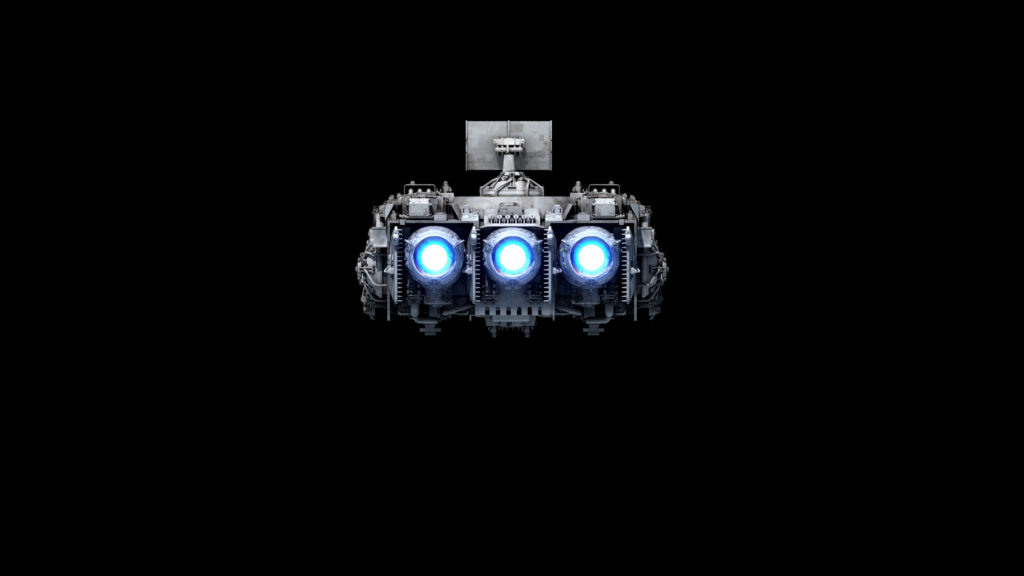 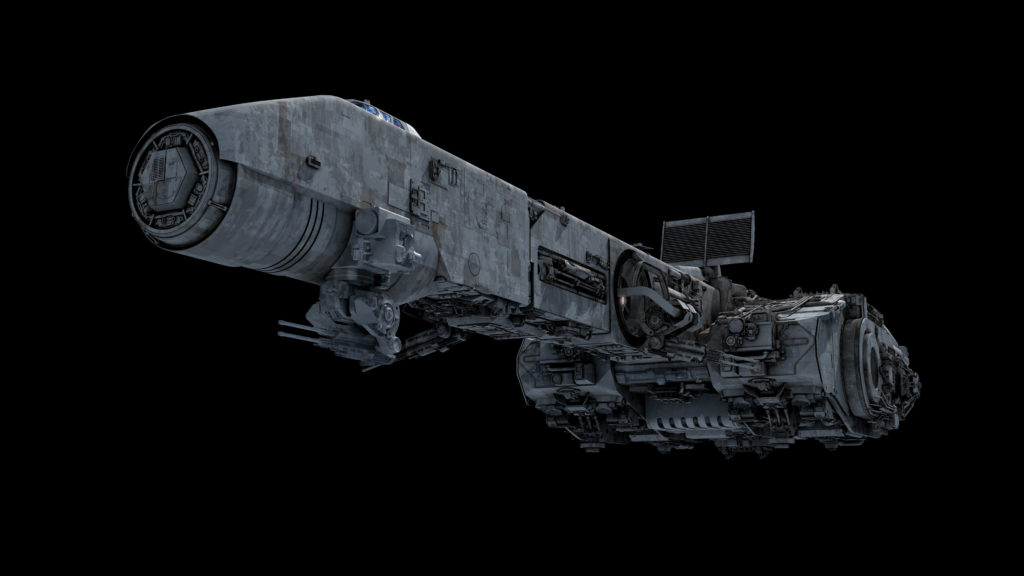 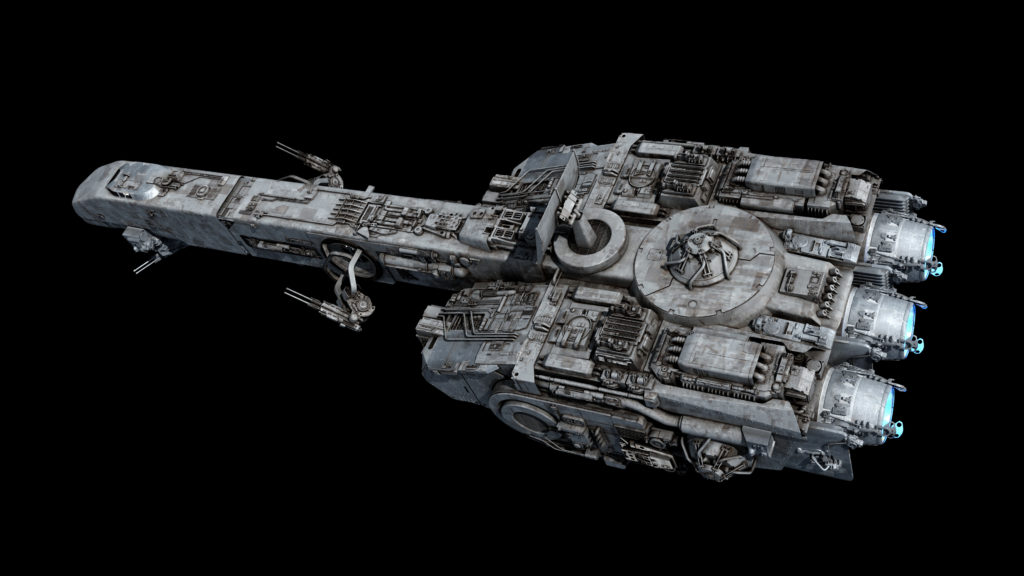 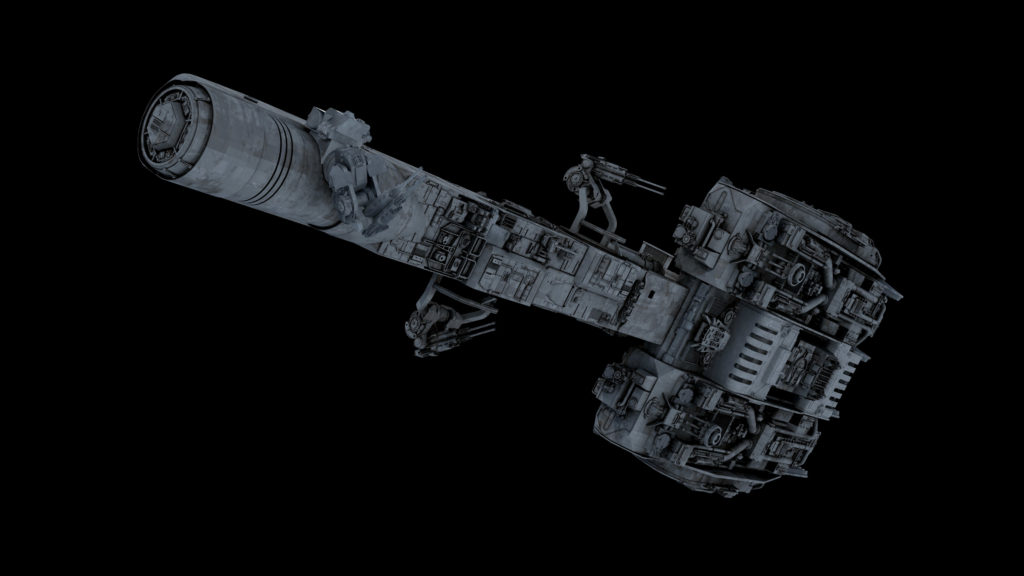 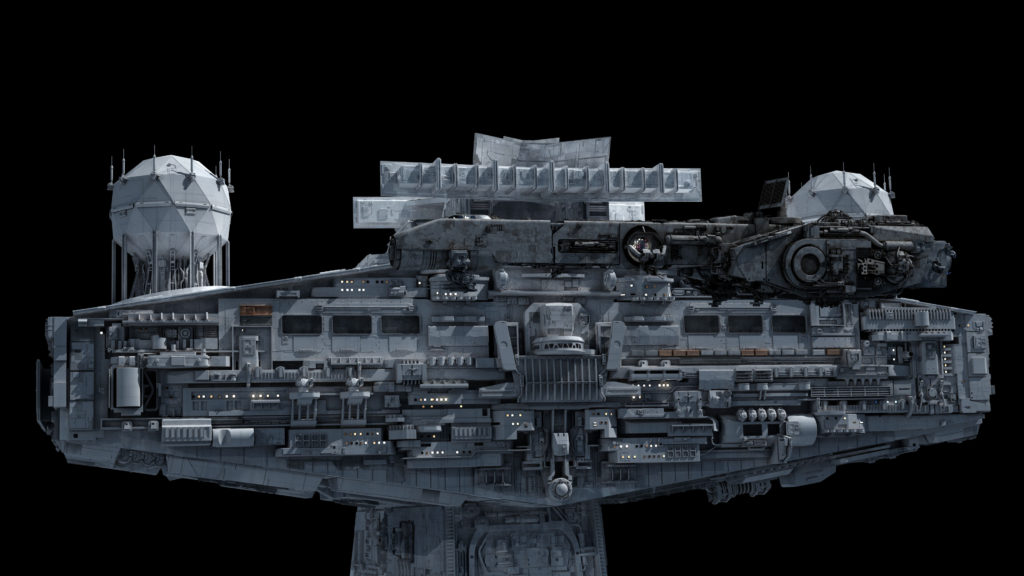 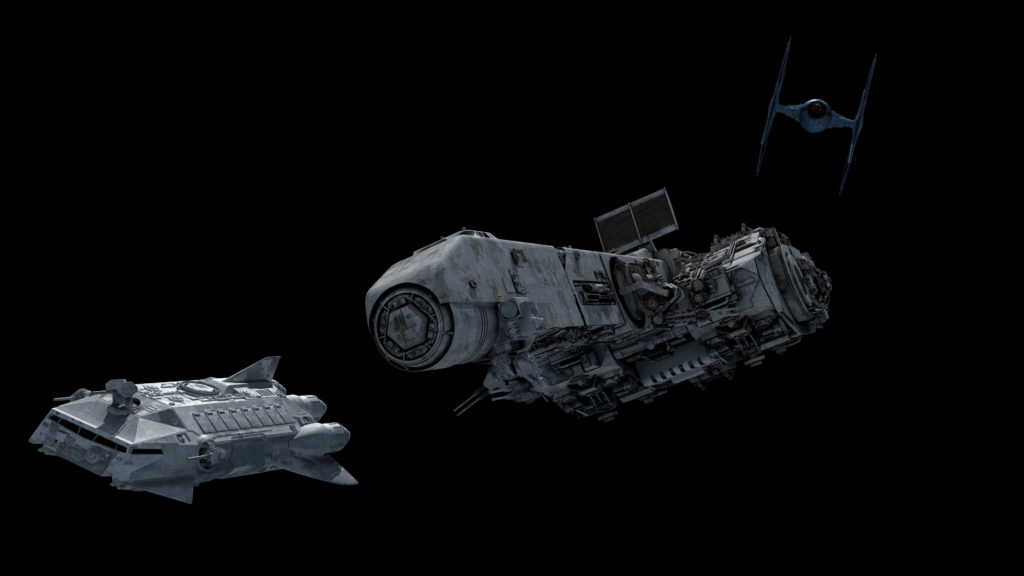 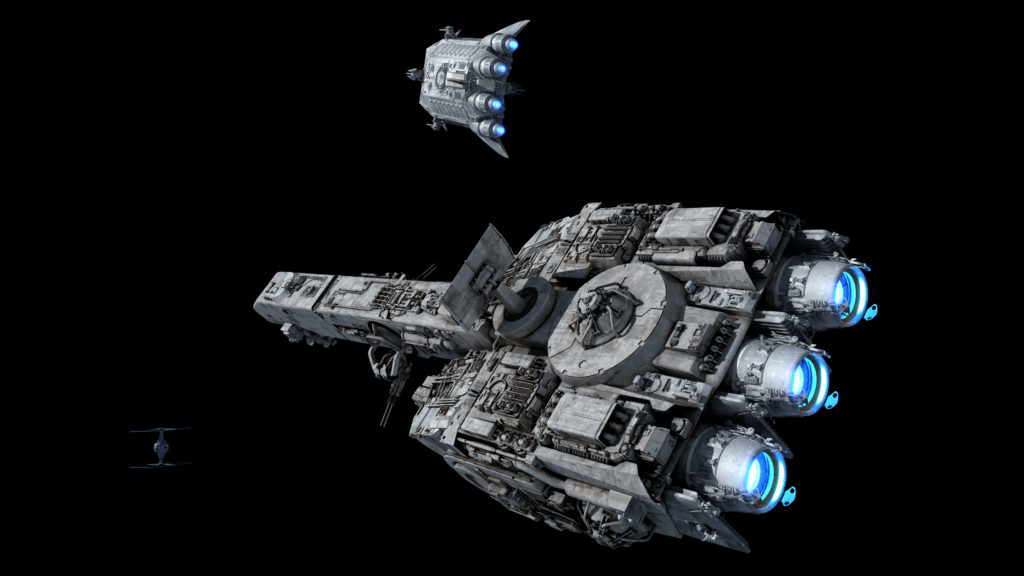 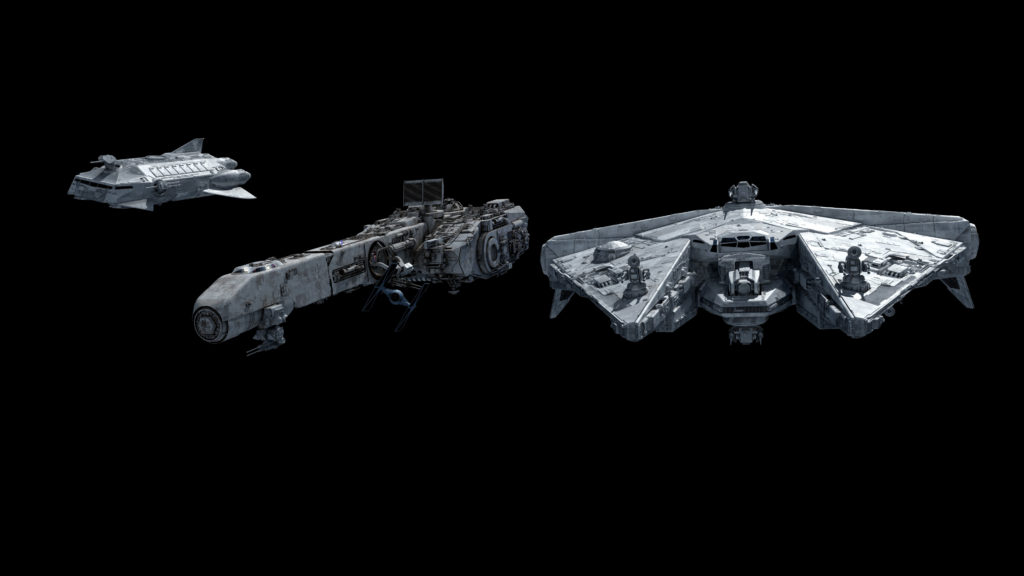 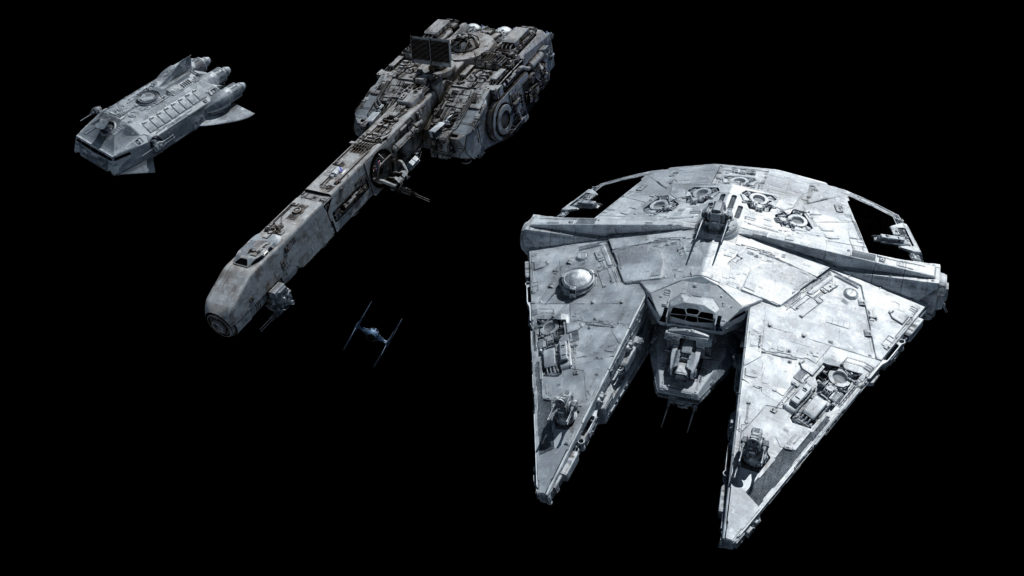 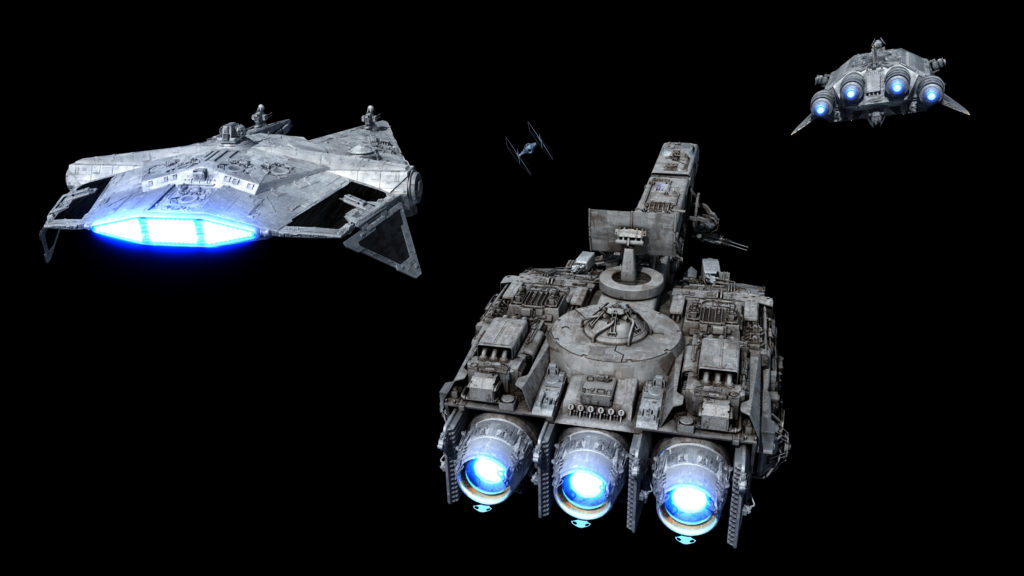 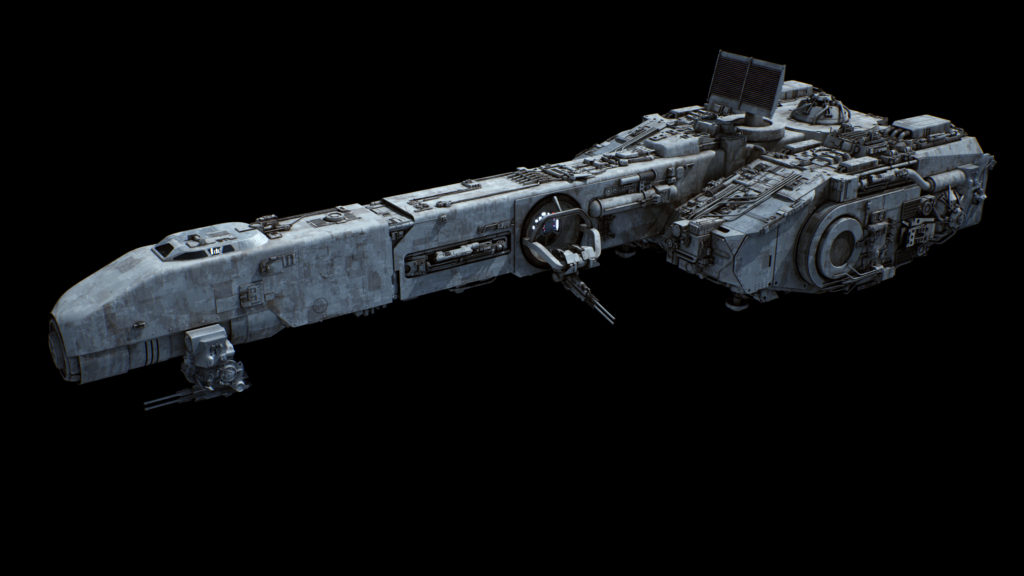 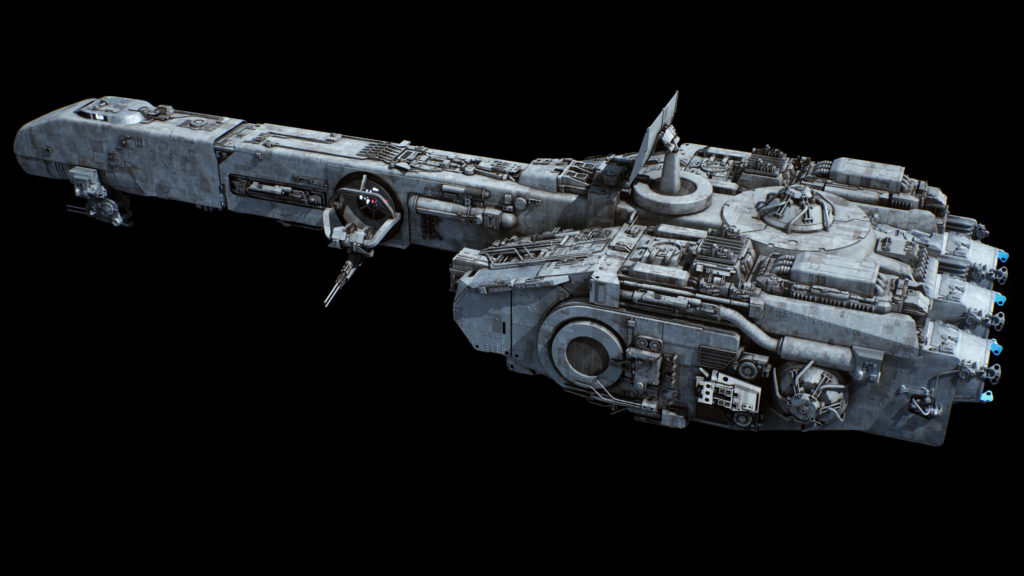 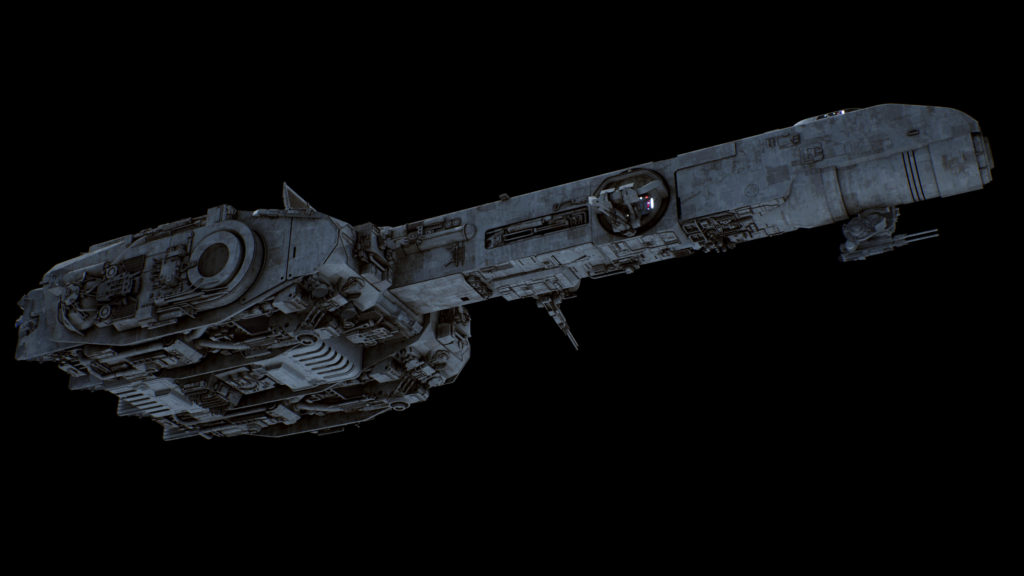 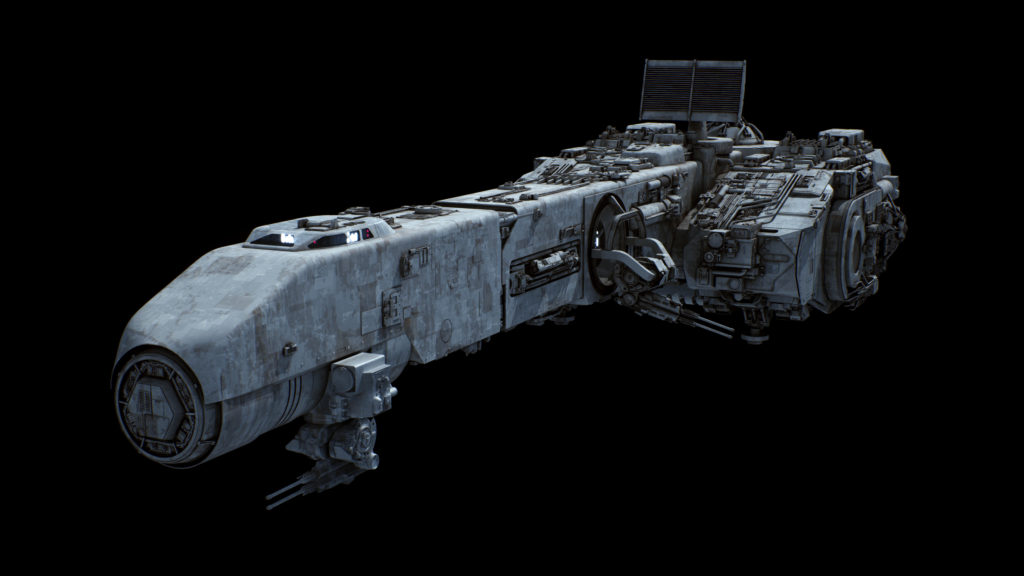 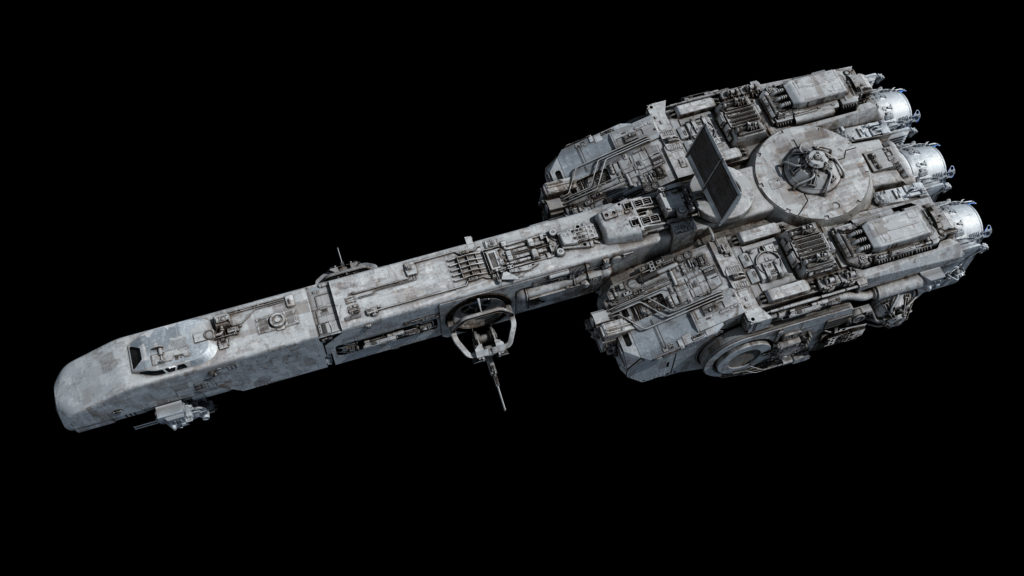 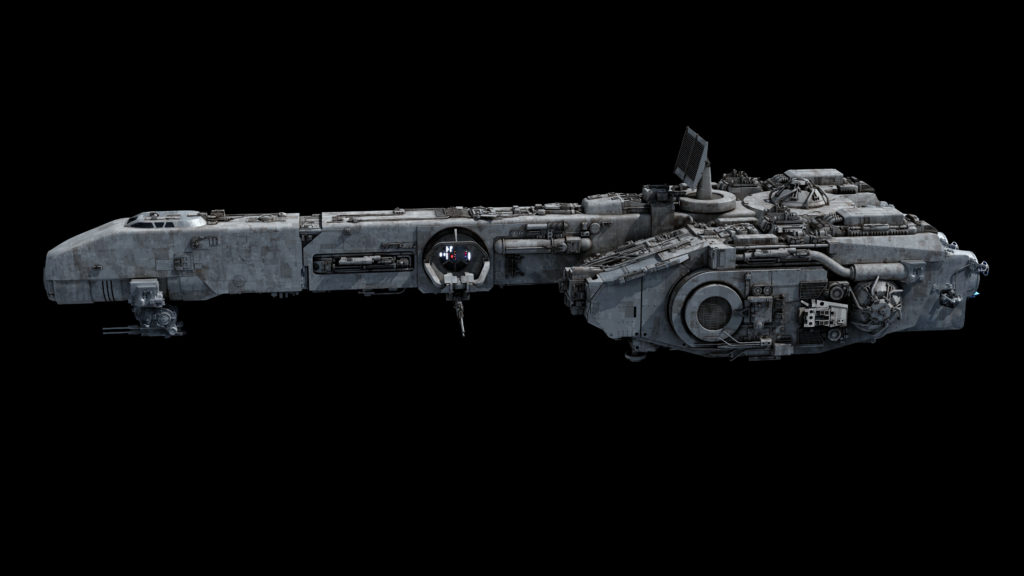 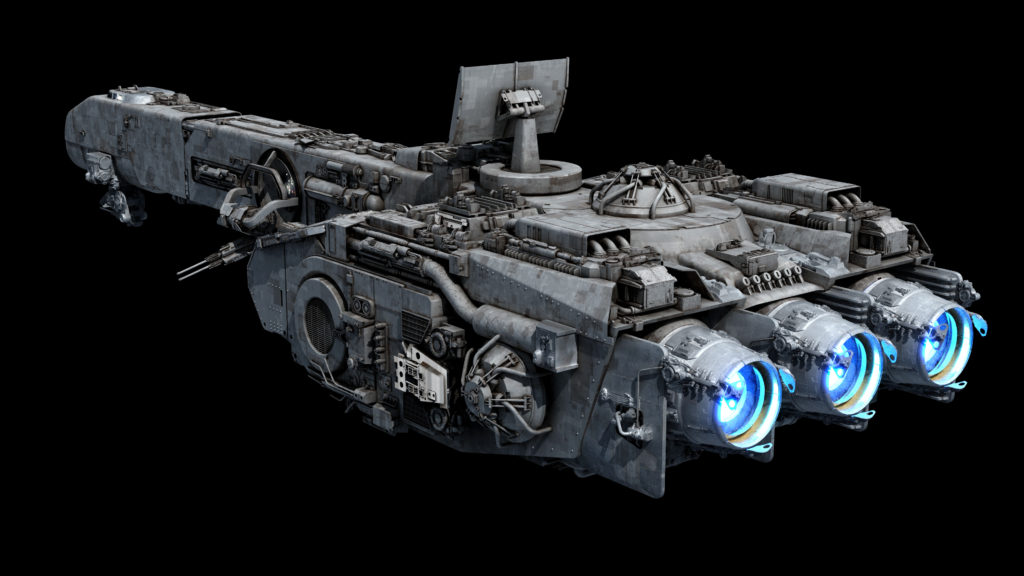 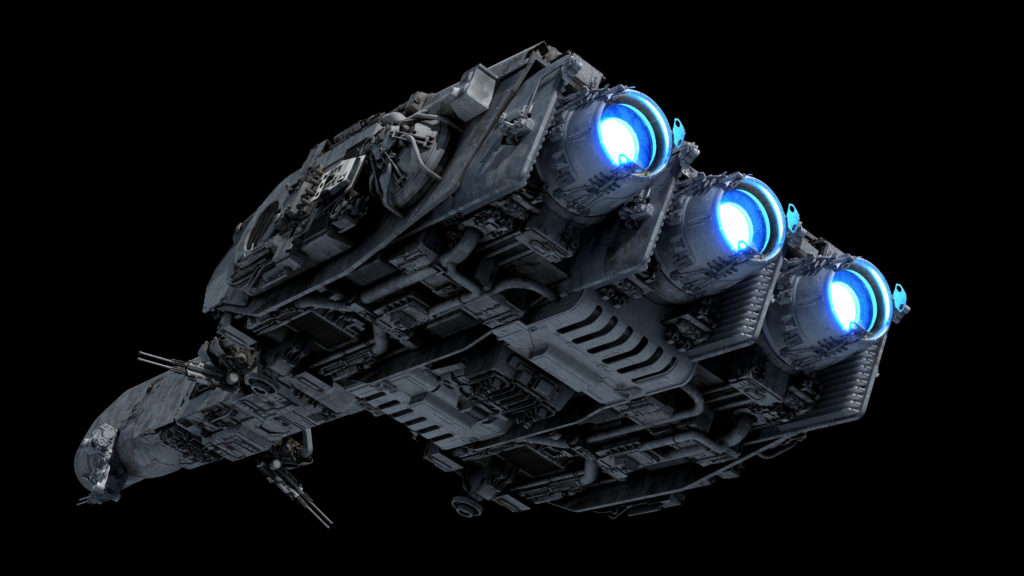 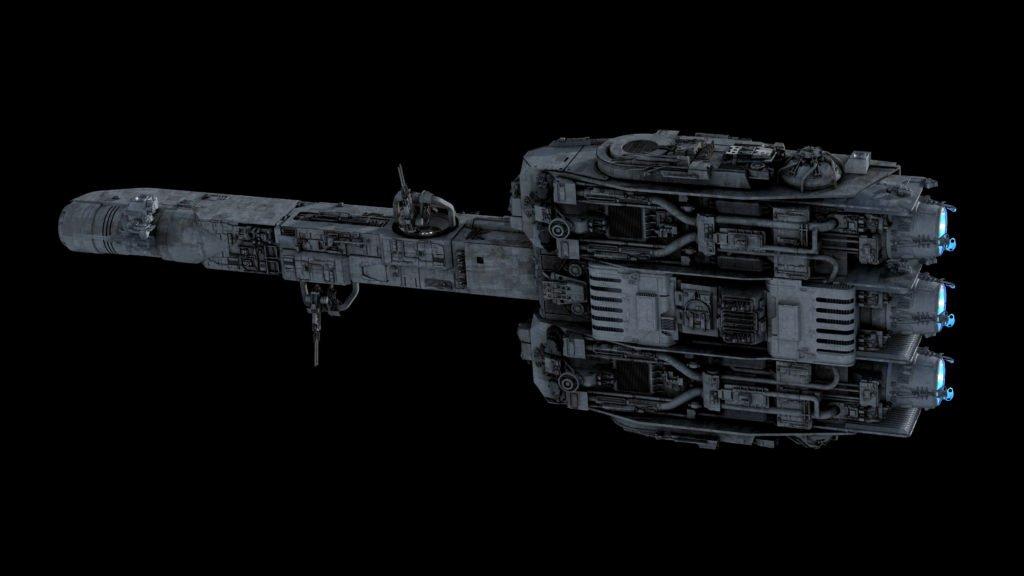 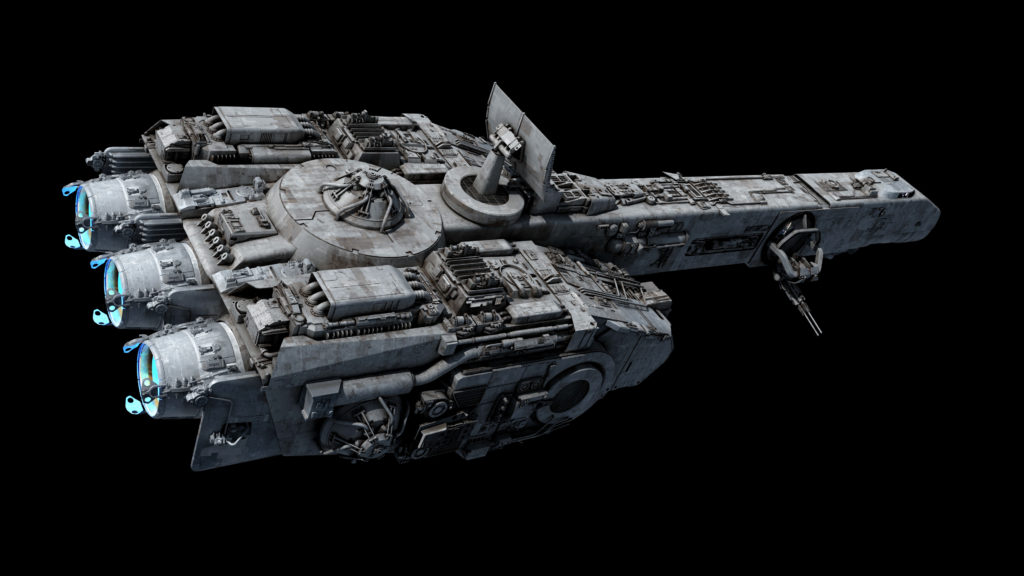 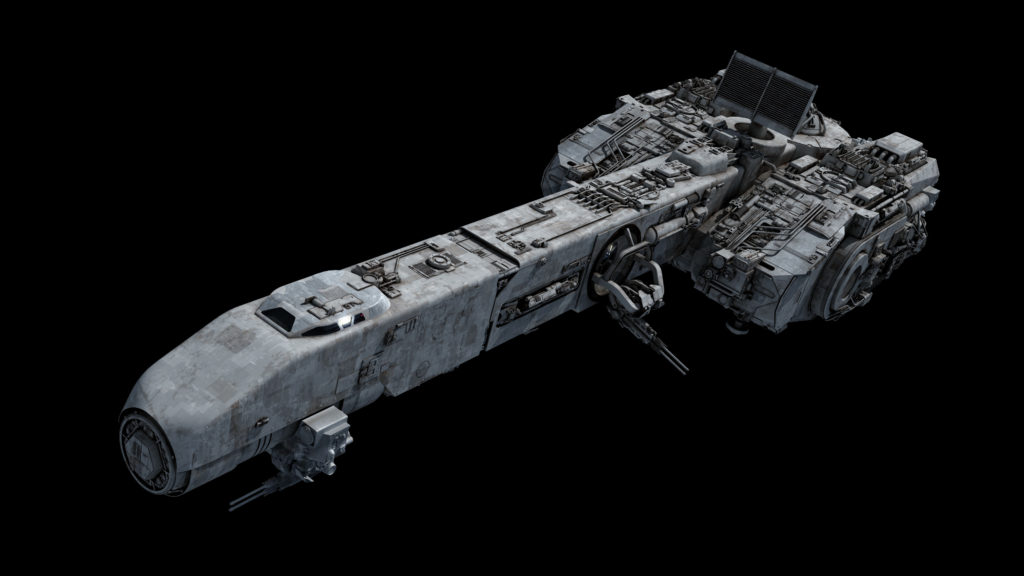 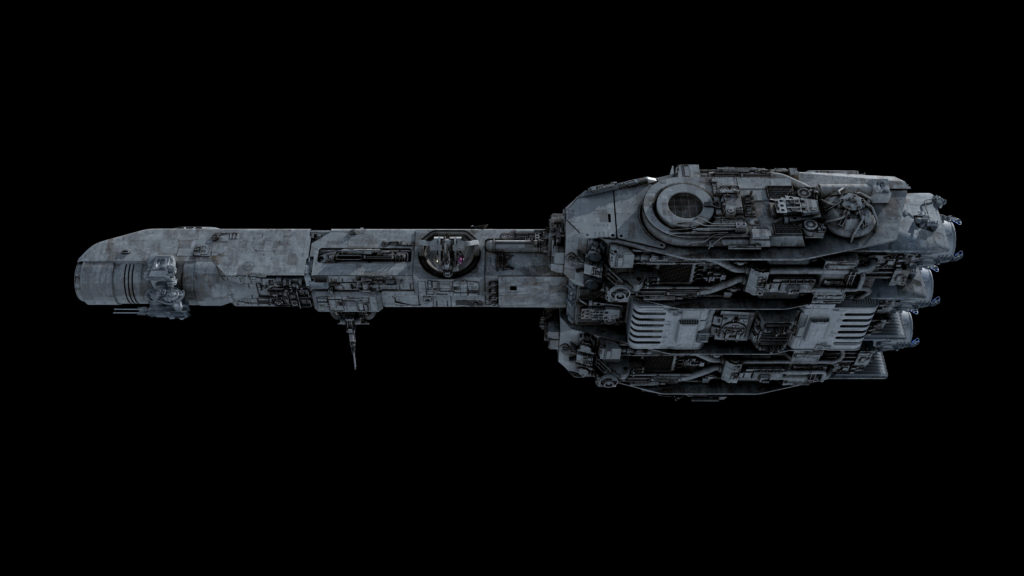 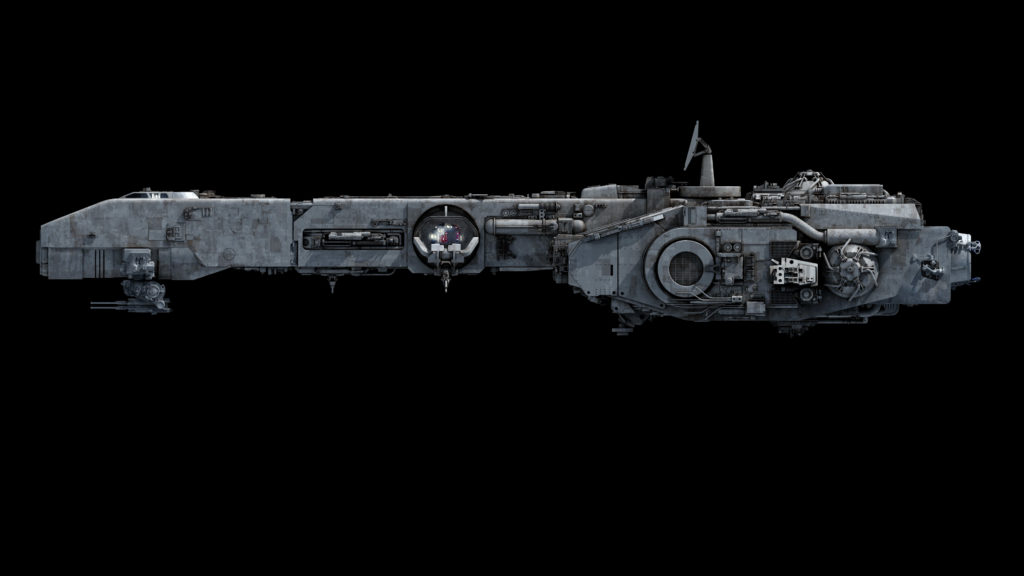 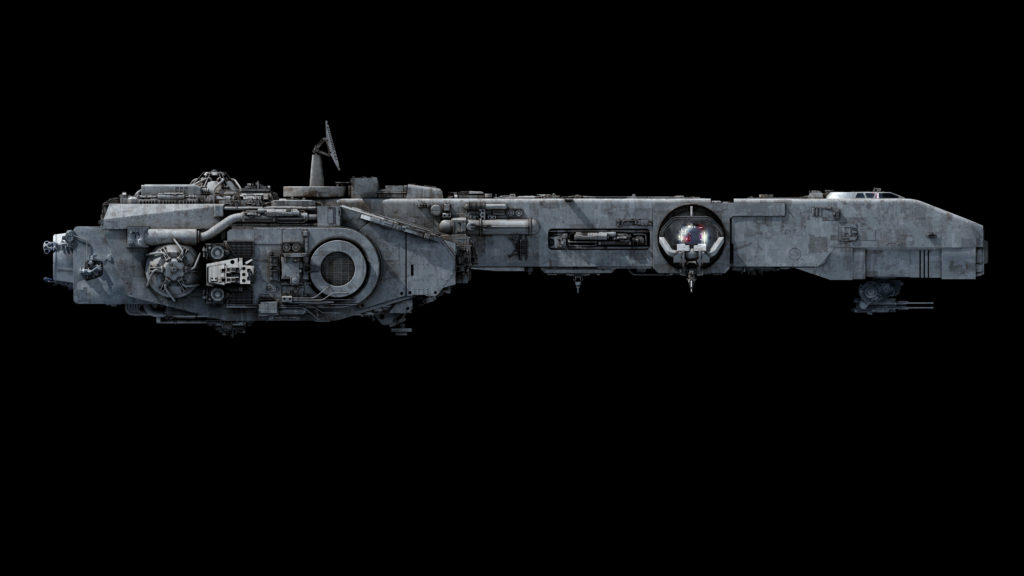 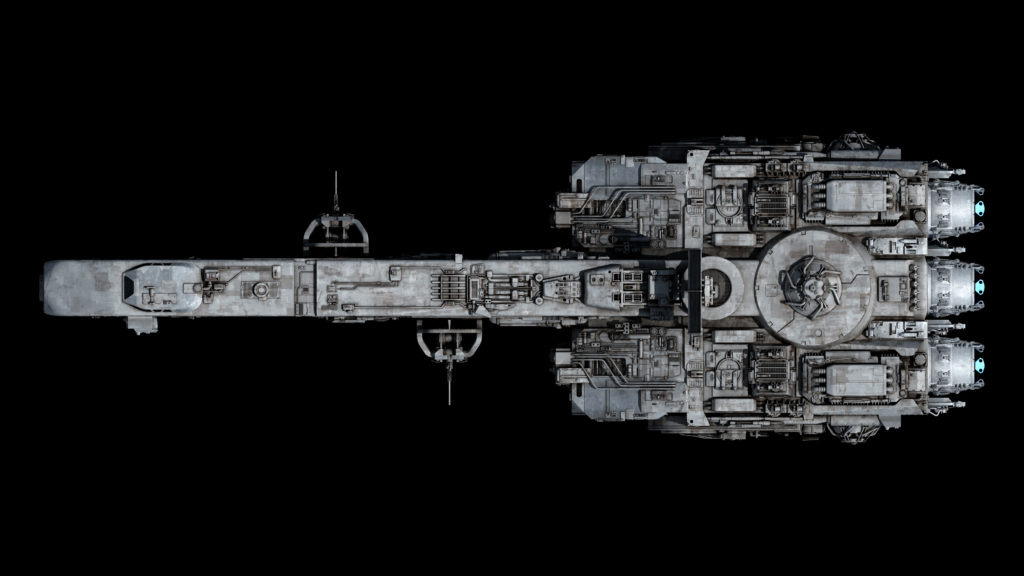 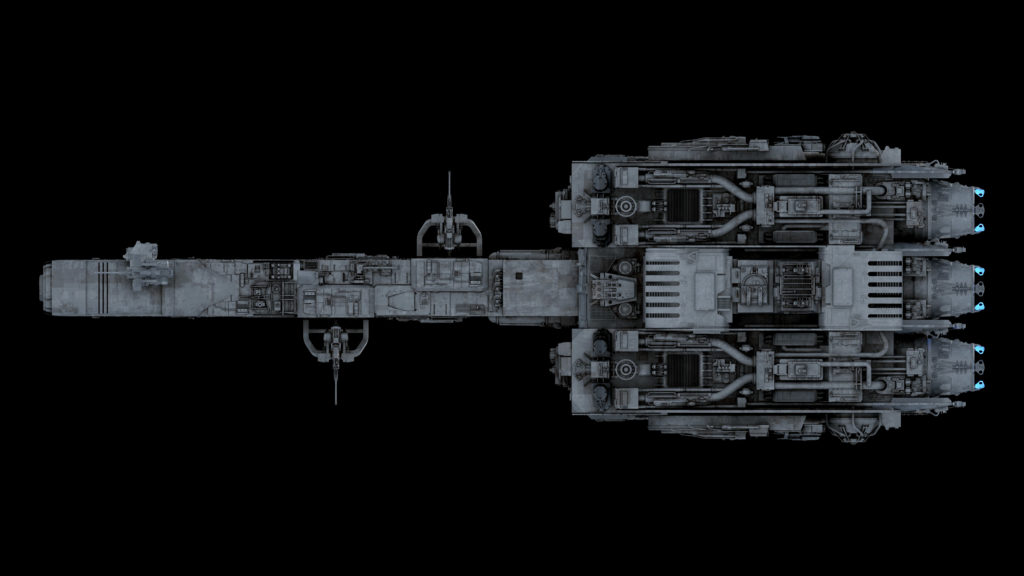 for some reason the gun mounts remind me of the MCRN Gunships from The Expanse.

This thing is really cool I like that design

Looks like an Alternate DP20. I’m really loving it!

this is an oddball…

Ansel, could you share the height of the ship? Is it a single deck? Any thoughts on the internal arrangement? Any estimate on number of crew? Am I correct that there’s no landing gear and no means of access other than the forward docking ring? Thank you!

The length overall is 112.4m, so you can get whatever measurement you want by measuring the orthos. Pretty much single deck, but the bridge/cockpit is a sort of half-deck platform. No estimate on crew. No landing gear, some access via hatches ventrally but primary access is the forward docking ring.

I’m guessing this is a CEC design? What’s the Model Number?

Ok, so here is my alternative headcanon / background story to this ship:

A rather unknown ship, the Dart-class gunship could only be found patrolling smaller, less frequented hyperlanes (alongside other vessels) and sometimes cleaning them from debris or smaller asteroids with its added tractor beam projector. It emerged from the successful occupation of the Outer Rim world A’ogaoth II, a less significant trading outpost turned planetary civilization with less than 15 million inhabitants. The world’s main economic products were the planet-side mineral and metal deposits and the “Dur’t shipbuilding and manufacturing company” products such as this vessel, originally labelled the Drt-43d/4, but often referred to as “Dirt ship” due to its manufacturer’s phonetic similarity. It was originally sold both into the general market (receiving only little demand) and into local smuggling and pirate groups. It lacked significant hull strenght, shield strenght (only navigational shields), armament, equipment and generally quality often seen in Imperial warships; this is due to the circumstance that the local Sector governor decided not to reconfigure the shipyard to produce standard Imperial warships, either not bothering at all with this planet’s unimportant affairs or out of concern, that this might plunge the world into unemployment and disarray. He therefore proposed a way to utilize the relatively useless ship in a minor, yet necessary role: Patrolling and maintaining smaller hyperlanes, first only locally and later across various places of the galaxy. Its cheap cost and decent functionality was appreciated at least by the Imperial Survey and Exploration Program, which also monitored and maintained remote hyperlanes. The ship was procuded out of anything the manufacturer could gather, given that planetside materials were often exported and shipwrecks and debris was readily available. With Imperial contracting, this design philosophy changed somewhat, as the construction process became more streamlined and standardized, yet remained distinctly unique in its incapability to produce two exactly identical ships, as the Empire demanded a fixed amount produced each year, yet tried to keep the price as low as possible. The asymmetrical assembly of weapons systems and other components is still a trademark of this ship class, being often described as a “nightmare to maintain” and as an “unusable piece of junk, barely worth the scrap price”.

Its beautiful in an ugly way, like it was built out of spare parts because they needed any available ship. Seems like something the rebellion would manufacture.

That perfectly describes this ship, and I agree with you about it looking like something the rebellion would manufacture

I love these kind of ships

My hunch is that this seeming Saturday Night Special is a badly obsolete technological/doctrinal forerunner to the Skipray Blastboat, sold to bottom tier planetary defense forces and criminal groups that lack either the connections to acquire or technical base to operate something more modern. If it ever runs into something more capable than a low grade Space Technical its dead meat, but that’s more than enough to cover most of the the Outer Rim hellholes that would need it.

Hi
your work is remarkable , i waiting to see more of it , specially Arquitens-class light cruiser

I really like the asymmetry of it (you have obviously allowed for internal space for the port and starboard mounts).

I like both versions of the Dart. Fractal, would you be open to keeping them as different ships?

can the side guns aim fwd or aft?

Yep – in some of the shots it shows the whole frame assembly rotating around the viewport.

You in some direct competition with Howard Day in some sort of “Pimp my Gunship”? 😉

Looking from astern, it appears you have an element or two out of alignment. This might just be perspective…

Why were you ever assuming it was Imperial to begin with?

Why were you not? It’s the same slate grey, and it’s flying in formation with Imperial craft.

Fractal literally said earlier that he had no firm view of the manufacturer and that it would be a patrol/customs type ship that would be very widely produced under license.

With that nose remind me a boarding craft from Seaquest.

I love this ship already! I don’t know why exactly but this reminds me of the short time that I worked on fan ships for Stargate, ah nostalgia how you have ruined me.

So are those light or heavy guns?

Ultralight turbolasers in the over/under config from the Lightskimmer concept.

Fractal, given the ample range and traverse of that front ventral turret, I’m assuming the base unit itself doesn’t rotate around that curved bottom–or does it?

Also, love the gimbaled and asymmetric gun mounts. Overall, she’s fugly as hell–looks like something you’d see in the background of a half-page spread in an early ’88 WEG supplemental titled ‘Space Kittens & Turbolasers’–and I have a lot of questions about why anyone needs a 3-turret gun tube slapped to a set of engines, but she looks like she works like an ornery SOB.

The base unit itself does not further rotate, just the turret and barrels.

Seems more likely than not-I get the distinct impression you have to go *much* smaller (i.e. single-seat ultralight fighter ala the Delta-7) before internal hyperdrives become flat-out impractical.

It’s cool, but if I were a junior officer looking for a first small ship command, I’d still be hoping for one of those lovely sloops.

Is this a revamped version of this?: http://fractalsponge.net/dart/dart2.jpg

The engine block reminds me of a DP20. Any in-universe relation?

I suppose you could interpret that way. I have no firm view of the manufacturer. If it’s a patrol/customs type ship then it could be very widely produced under license.

This design is immediately so convincing I think it should stand on its own and not be considered a reimagination of the DP20 (Corellian Gunship). Great work!

Well, ‘revision’ and ‘related’ aren’t quite the same concept, but this thing does seem like more of a bare-bones fast picket design than the DP or even CR90. Speaking of Corellian products, it’s good to see that YT-1300 variant again.

The engine block is very reminiscent of the original concept of the Tantive VI.
Overall it looks great, I love the asymmetrical gun mount on each side.

Looks more like a system patrol boat/customs corvette to me. A large engine block for speed with a few small but powerful guns to enforce local laws.

That’s precisely what it is. Looks small, I’d say maybe a pilot, co pilot, 2 gunners and a commander. Only thing I’d add is a missile system mounted on the engine block, right where that dome is. One up top and one bottom. I’d use the system that is on the Scythe tank. In case you read this Fractal, what do the dimensions look like? Small enough to fit two in an Imperator II? Great design, good work!