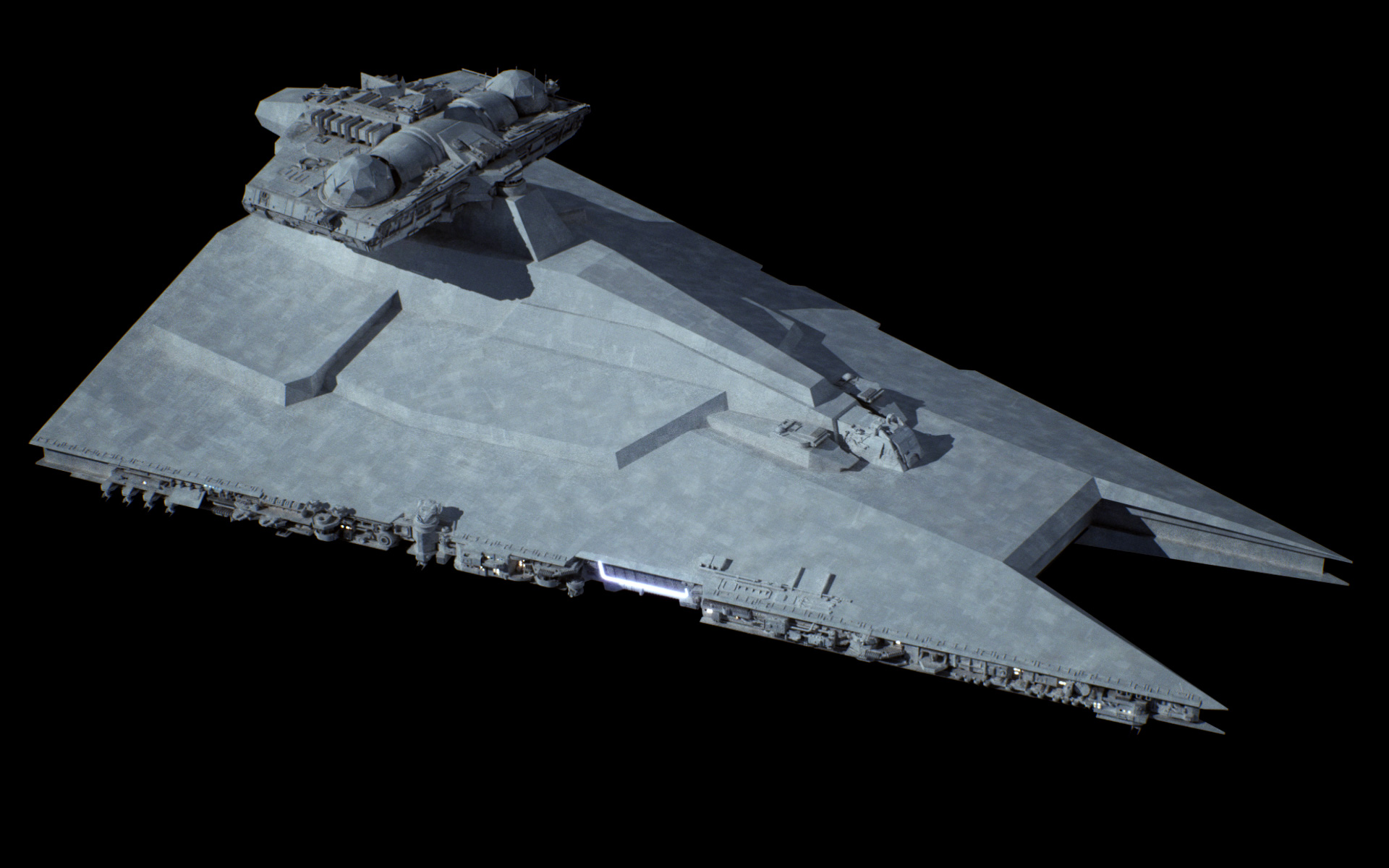 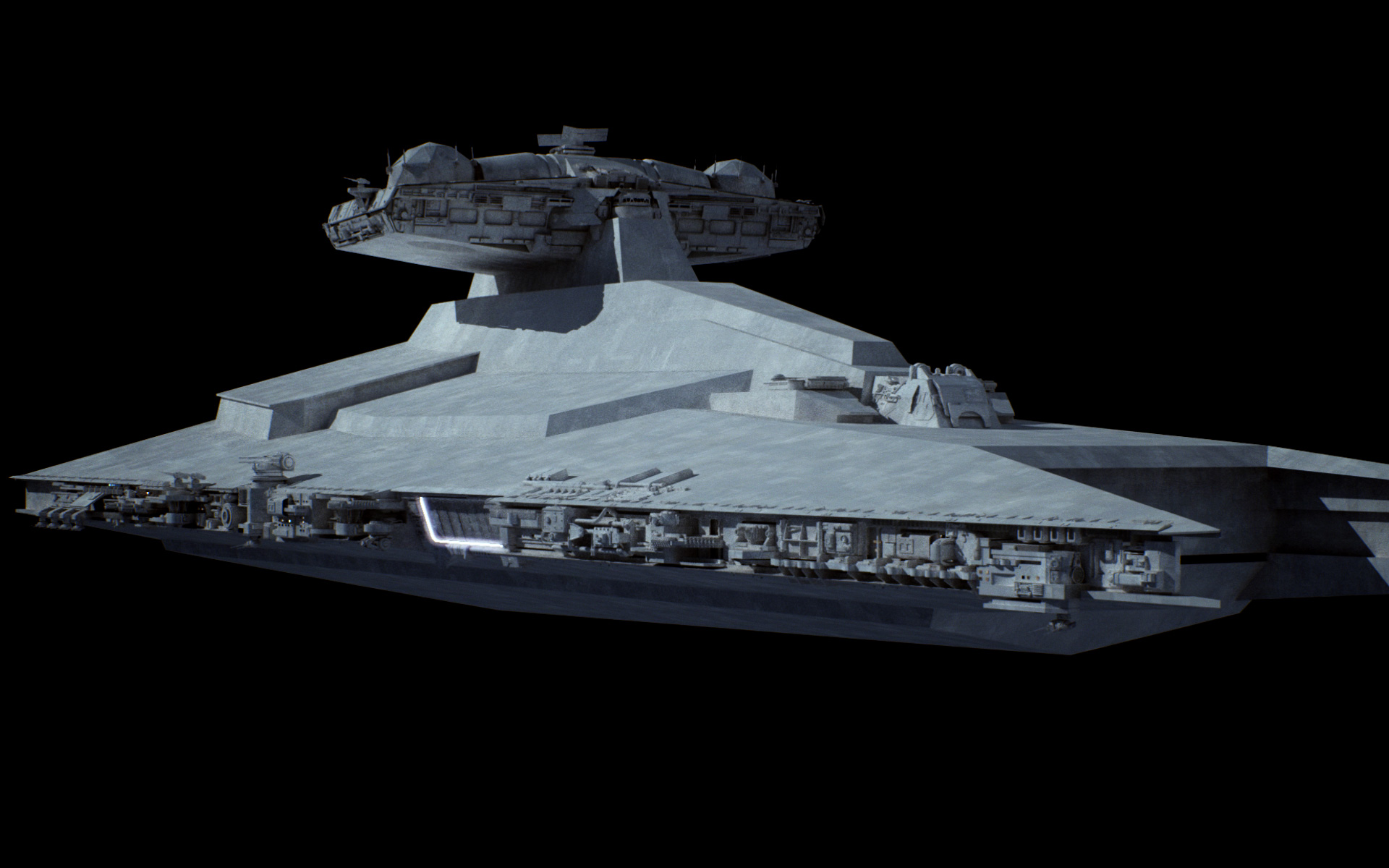 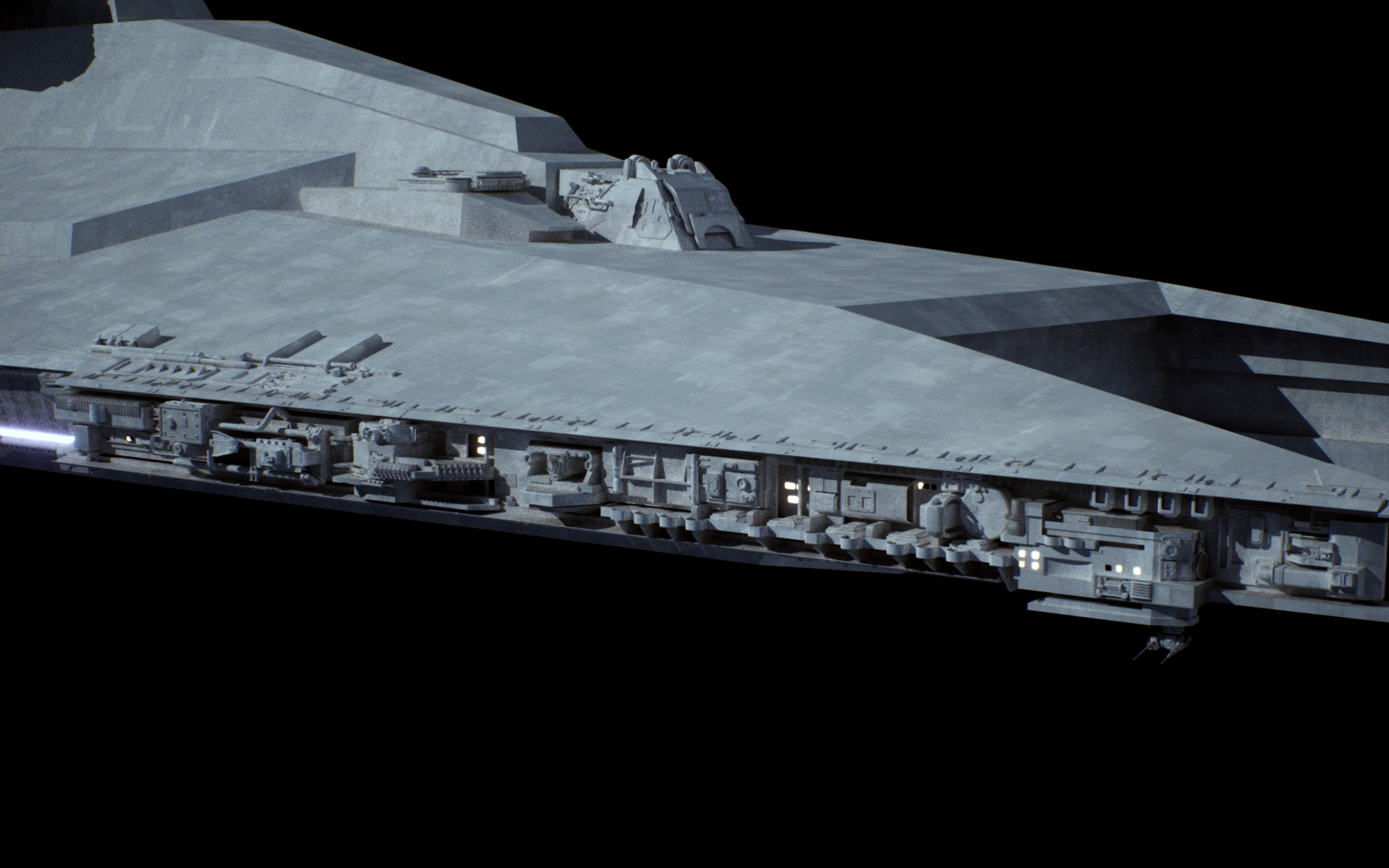 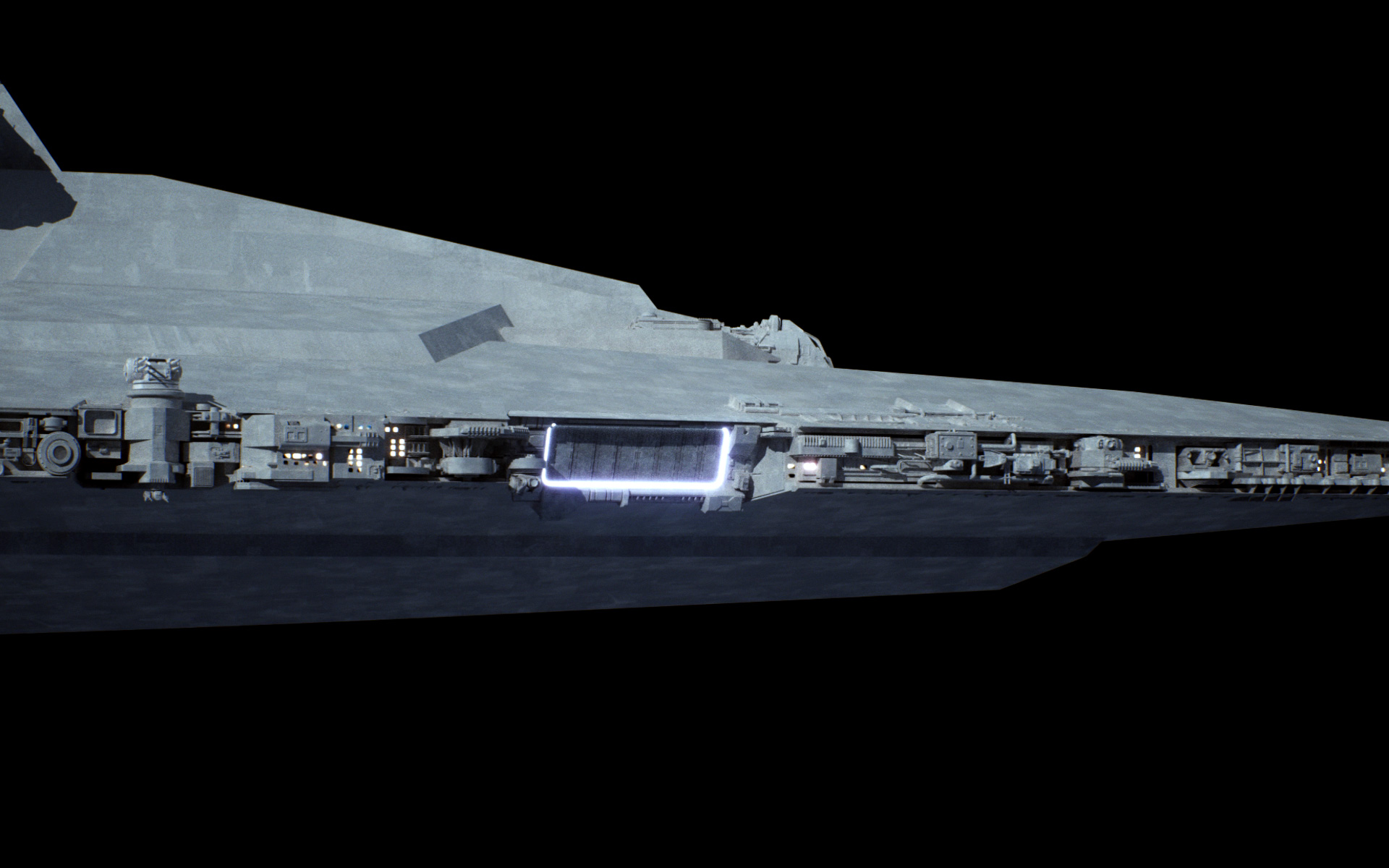 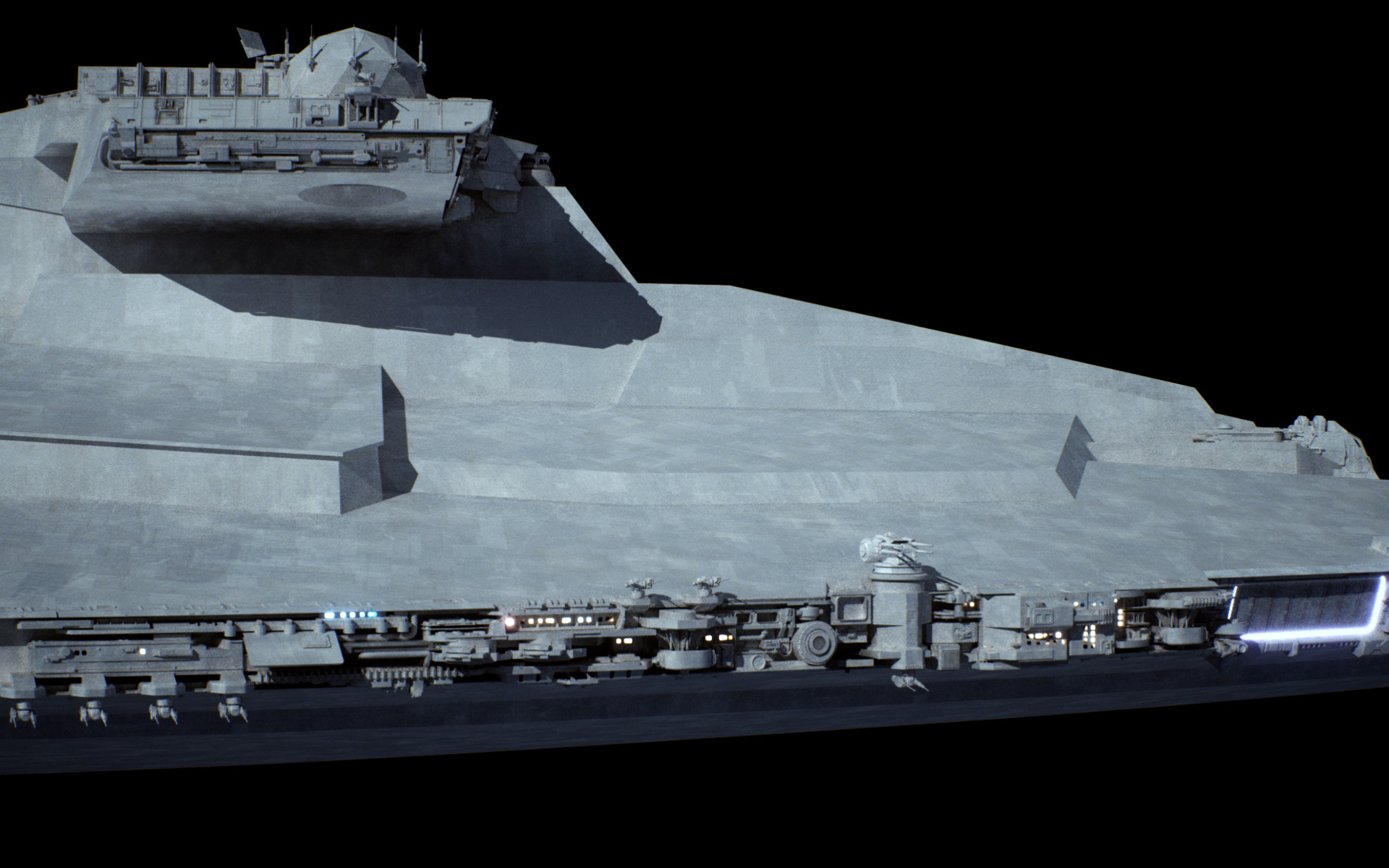 I also love this ship cause of the demolisher in droids! It looks really good so far. But I don’t think the radomes should be hemispheres like that when full spheres would allow the antenna to be larger and pointed in a bigger arc. Also the lower bridge looks like it goes too far forward? Anyway it is really great :3

Awesome! Do we have an official length for this thing yet?

I know in new canon that destroyers can operate in atmosphere with no problems but something this size should be able to actually land, right? Would make a nice little mobile base.

Considering Acclamators and Venators can land…I would think this and the Victory could land too. However the Vic may not be able to launch any of its complement as the hangar is on the bottom.

No plans for it. Volume is at a premium for both the VSD and this – no room for gear, which as much as I think it’s technically unnecessary for a repulsorlift craft is aesthetically perhaps necessary for landing 🙂

But wait… I thought that it was a VSD that Tarkin landed on a crowd of protestors or something… Or am I smoking crack?

I don’t think they have ever said what ship was involved in The Ghorman Massacre. Do you have a source??

Looks like the primary source is the WEG ‘Rebel Alliance Sourcebook,’ which notes that a “Republic warship…landed in spite of the citizens, killing dozens and wounding hundreds more.”

So, a ship definitely landed. Perhaps is was mostly tied into the old Legends stuff and VSDs being the largest ships able to enter an atmosphere?

Since when do you need landing gear to deliberately do damage to something underneath the ship? I think gear in SW is mostly for stability, rather than actual serious lift.

I really like the fact that you pay attention to volume, power requirements, etc.

I’ve just noticed, but how come unlike this ship, almost all of your other death daggers have the bridge tower slanted down to match the angle of the dorsal hull? Are the decks in, an ISD for example, laid out sorta like an accordion or something?

I’d expect most decks to follow the horizontal plane of the ship – maybe only isolated surface structures will have internal decks following the hull surface itself. With artificial gravity, transitions can be handled pretty easily. Also, Assertor, Bellator, Procurator, and this ship all have horizontal bridge deck orientations, so I wouldn’t say almost all have it following the top of the hull line.

Ah, I see then.. Quite interesting~

I saw your amazing Teroch-class Mandalorian Cruiser. Can you do the Keldabe-class Battleship, once you’re finished with the Gladiator-class Star Destroyer, next?

The Gladiator is a cool ship and i’m glad you’re modeling it! I’ve always been a fan of the more obscure capital ships.

Can you make a cr 90 or raider class corvette.

I love how you integrated the shield domes into the rounded components on the bridge superstructure. That was a really good call.

1) What do you think of the role of this ship? I saw it in the comics and in EvilleJedi’s HomeWorld mod and always thought of it as a mobile, armored palace for some petty stellar tyrant or a regional governor of the Galactic Empire (which may be the same thing) but was wondering what you thought it would be for…

2) You think through your designs really well, could you do a writeup as to crew sizes, number of shuttles and strike craft on board, ground troops, etc?

1) Frigate-carrier. Flexible role, depending on what it’s configured to carry.
2) I don’t like to do crew sizes, as it’s a blind guess. Hangar complement will get a bit more fleshed out later, but I’m thinking 3 squadrons of fighters depending on type, 2 battalions largely leg infantry (or with light vehicles only), and probably a squadron or so of shuttles/transport/dropship.
3) Yeah probably will. Just need to get to it.

Hey Fractal, it has been a bit, are we still getting that Bellator comparison shot?

I am assuming…since this is from the same era…that this will have the same main guns as the Victory?

It was designed to be a lighter escort for the Victory, so possibly lighter guns. Perhaps somewhere between the MTL and DBY-827.

I think it’s debatable what “light” turbolaser is – the yield can span 3 orders of magnitude across the range. They’d be “light” compared to, say, Bellator main gun, but they’d still be teraton range heavy turbolasers by my scale.

There is an official pic on Wookieepedia. The 6 main guns bear a resemblance to the guns on the Venator that Fractal used on the Vic.

They also bear as close a resemblance to the heavy quad laser turrets on an Arquitens. I believe it’s a common turret style on Clone Wars era purpose-built Republic warships, rather than indicating any particular cannon.

So I though the Gladiator’s main armament would be quad 200 gigatons medium turbolasers on it’s sides, but since now that it not a case, I guess the main armament could be some kind of light-heavy turbolaser, like the ones on the Teroch Mandalorian cruiser but as twins instead of singles.

So, with 18 PDTs, 2 Quad Medium Turbolaser Turrets, and 2 Tractor Beam Turrets so far, she’s already more heavily armed than her official stats.
Fractal is proving, once again, how little consistency Legends had wrt weaponry (not that Canon’s much/any better).

Fractal, I am so glad you’re doing the Gladiator. It’s pretty much my 2nd favourite ship after the Crusader.

Not quite the original has 12 light dual turbolaser turrets, 10 medium laser cannons and 10 proton torpedo tubes or assault concussion missile launchers with up to 300 medium missiles. As well as 26 fighters.

But knowing Fractal and how he is with ships his variant will most defiantly be more well armed.

Since Fractal’s PDTs are 1 light turbolaser cannon with one heavy laser cannon, her laser cannon armament is more than twice as strong, and her light turbolaser armament is 2/3 as strong. Fractal’s MTLs are, if I remember correctly, more than an order of magnitude more powerful than his LTLs, meaning that either of the 2 quad turrets carries more firepower than the entire official turbolaser armament.
I admit that I didn’t address the munitions launchers in my earlier post. I should have remembered to mention them.

My thinking right now would be to make the twins the same main gun as ISDII/Proclamator (40TT) but on a new turret. Probably will be 12 200GT MTL (3 quads). I don’t even know why they bothered putting launch tubes in the description – there’s zero obvious place for them on the existing art. Might go by the wayside or get tucked into a VLS silo on the superstructure I guess.

2 squadrons seems on the low end of reasonable for a ship this size with ~30% of its internal volume dedicated to hangar function. Maybe 3, depending on size. I’m pretty sure I can fit a full wing racked into the main bay alone, but obviously that’s not necessarily the maintainable complement. This depends on troop capacity. If it’s 2 battalions like Wookiepedia says, then it’s probably going to be pretty tight. Possibly infantry or light repulsorlift armor – no AT-ATs because the barge space just really isn’t there. The main bay up front will *barely* fit a Lambda by height as it is. Well, maybe a handful, like 4 AT-ATs.

Hangar configuration is really hard to judge – there’s the balance between carrying stuff, maintaining what you carry, and deciding if you’re carrying fighters or troops and vehicles. It’s just clear space – how it’s arranged is flexible, and that’s the whole point. This ship could easily carry a wing of fighters if you remove most of the vehicle and troop space. But if it does carry 2 battalions, it will really depend on what vehicles those troops are bringing.

I always thought of the missile tubes being for fighter grade munitions, similar to those on the Arquitens, as supplemental point defence (it was designed for the fighter heavy environment of the Clone Wars). I imagined them in clusters of 5 at the tips of the prongs. Possibly a vertical stack of 5?

Could be that they use the TX-225 Occupier tanks instead of AT-ATs for armor…maybe some smaller walkers. Space would be at a premium on this thing…why take it up with giant walkers when you could get some smaller tanks

Yeah that’s true I forgot that he often does that so you’d be right then. But yeah those missile launchers do make a difference because they can have either medium concussion missiles or proton torpedo’s and it can carry up to 300 rounds of ordnance for the launchers which is fairly hefty.

Though knowing fractal it’s anyone’s guess whether or not he’ll put them in his variant. It’d be nice if he adds em because that’d give it even more hefty firepower and more missiles to spam when it escorts the already missing spamming victory but I’ll like whatever he decides to go with.