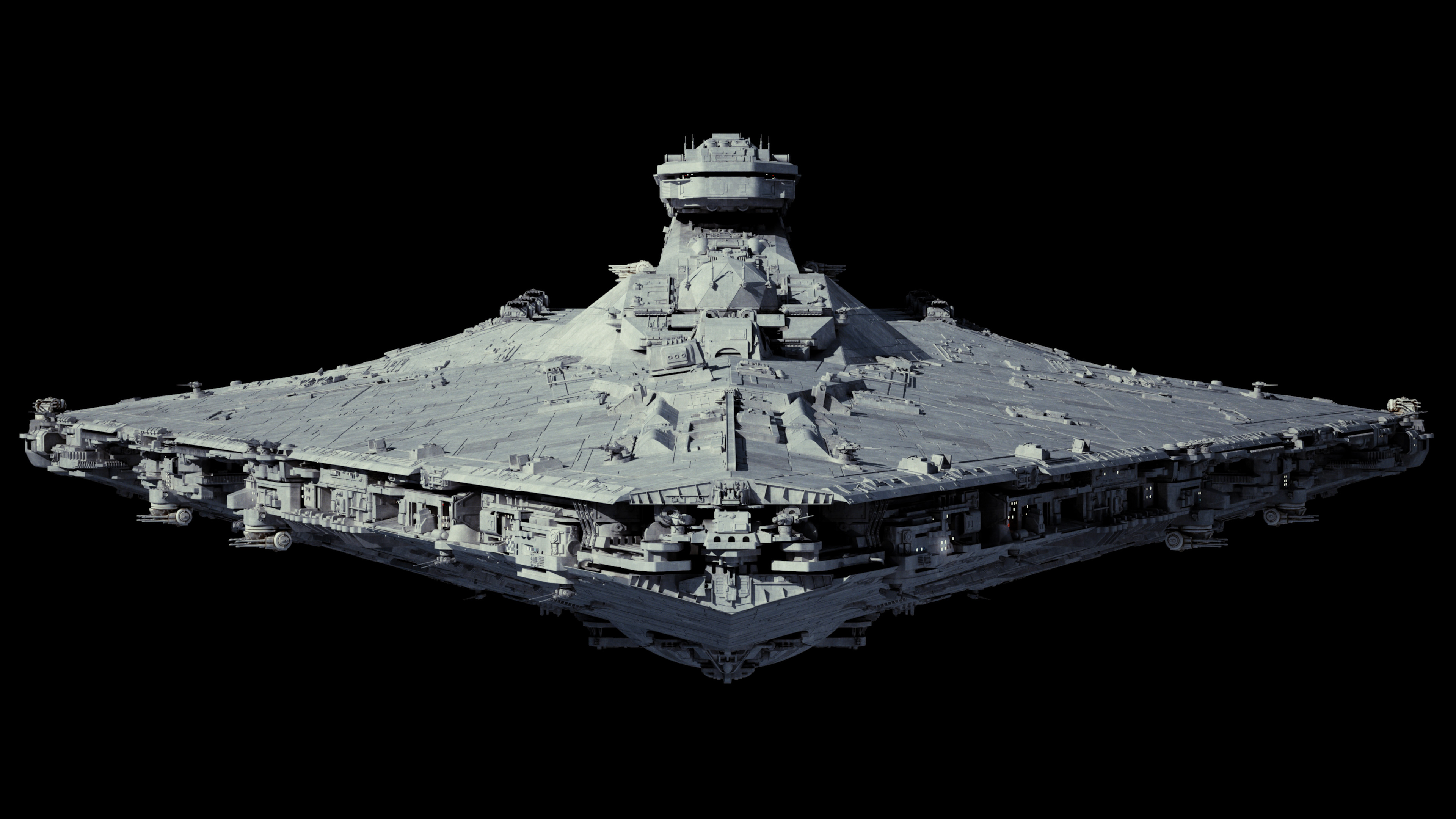 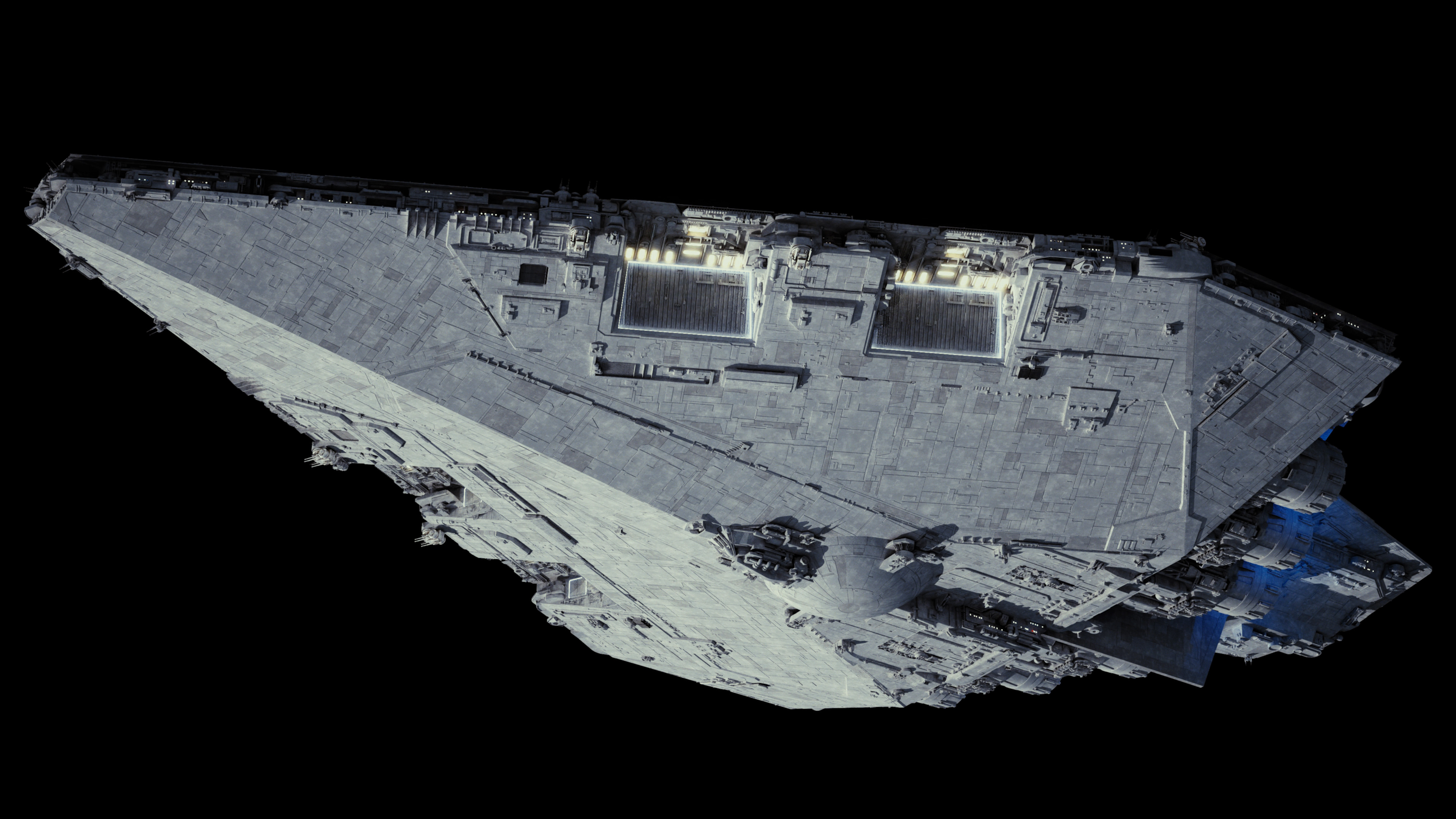 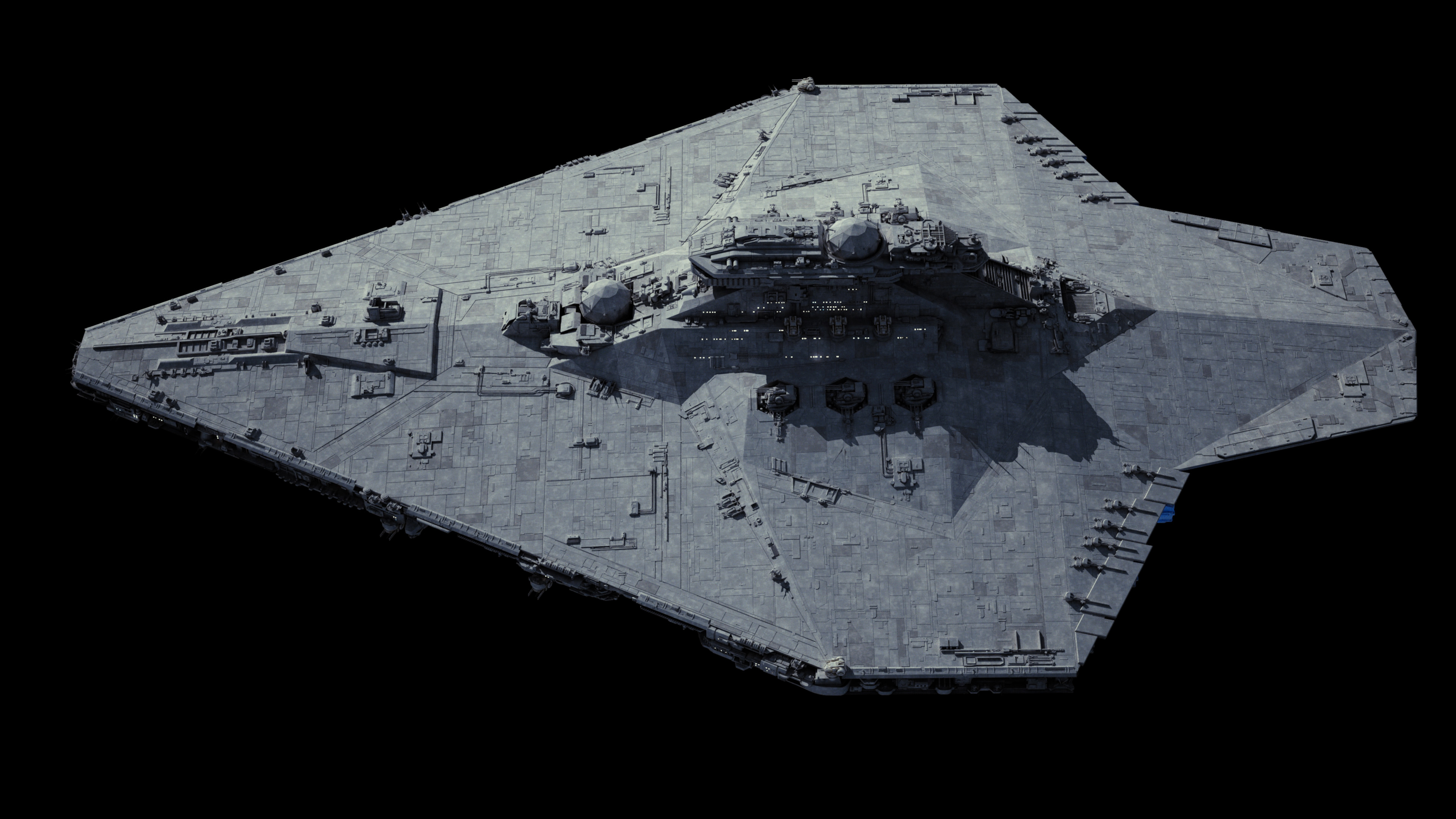 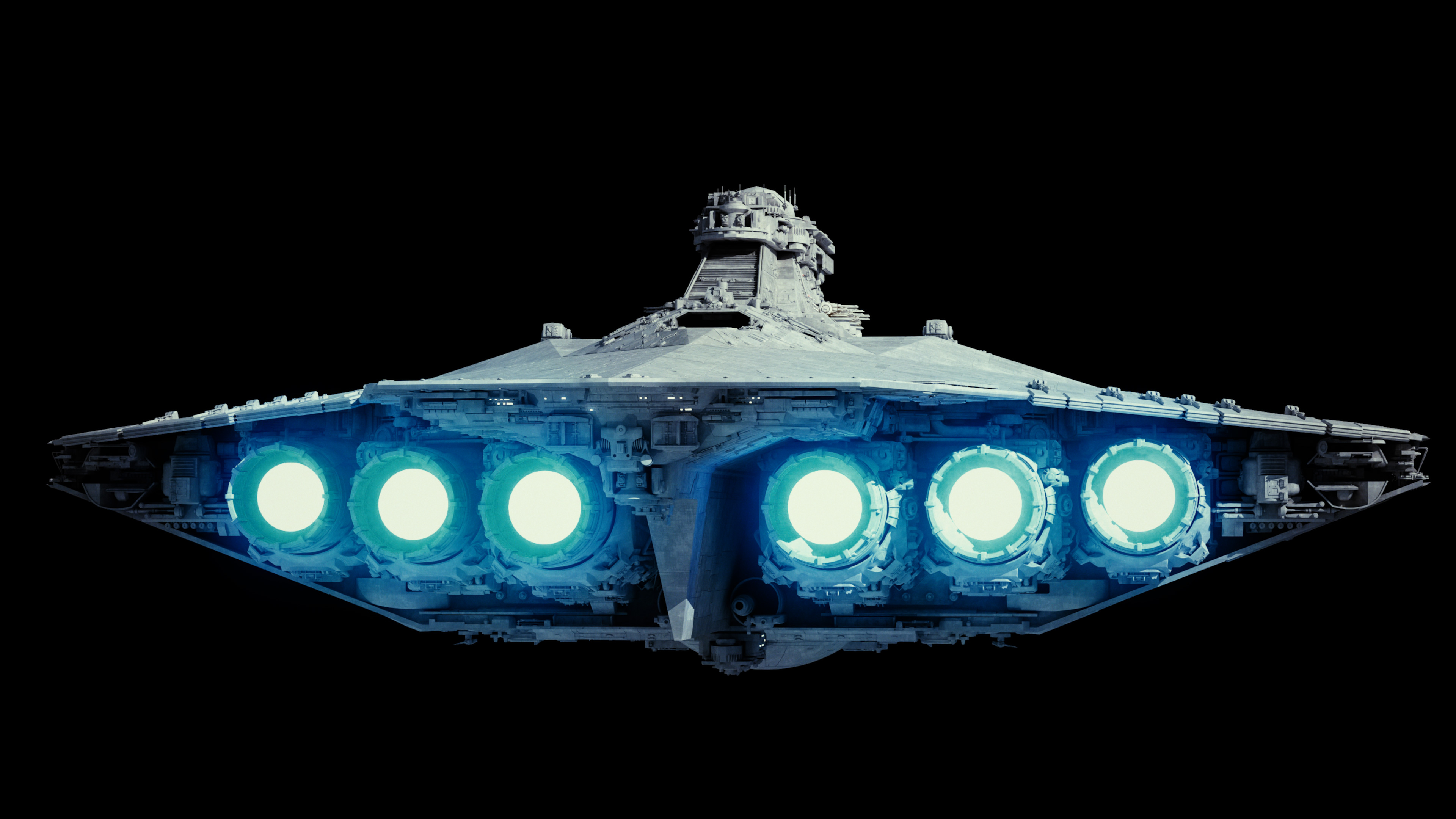 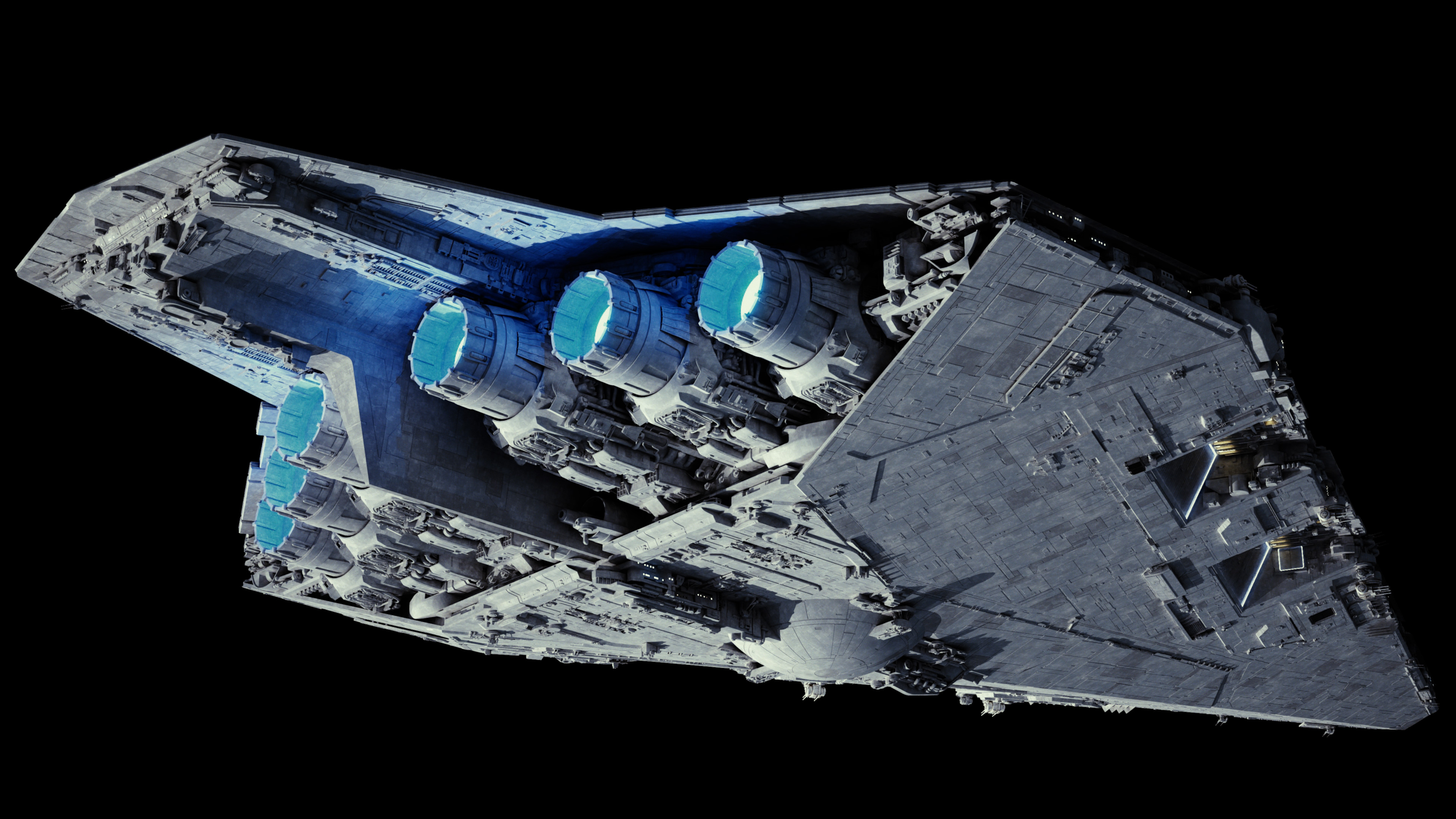 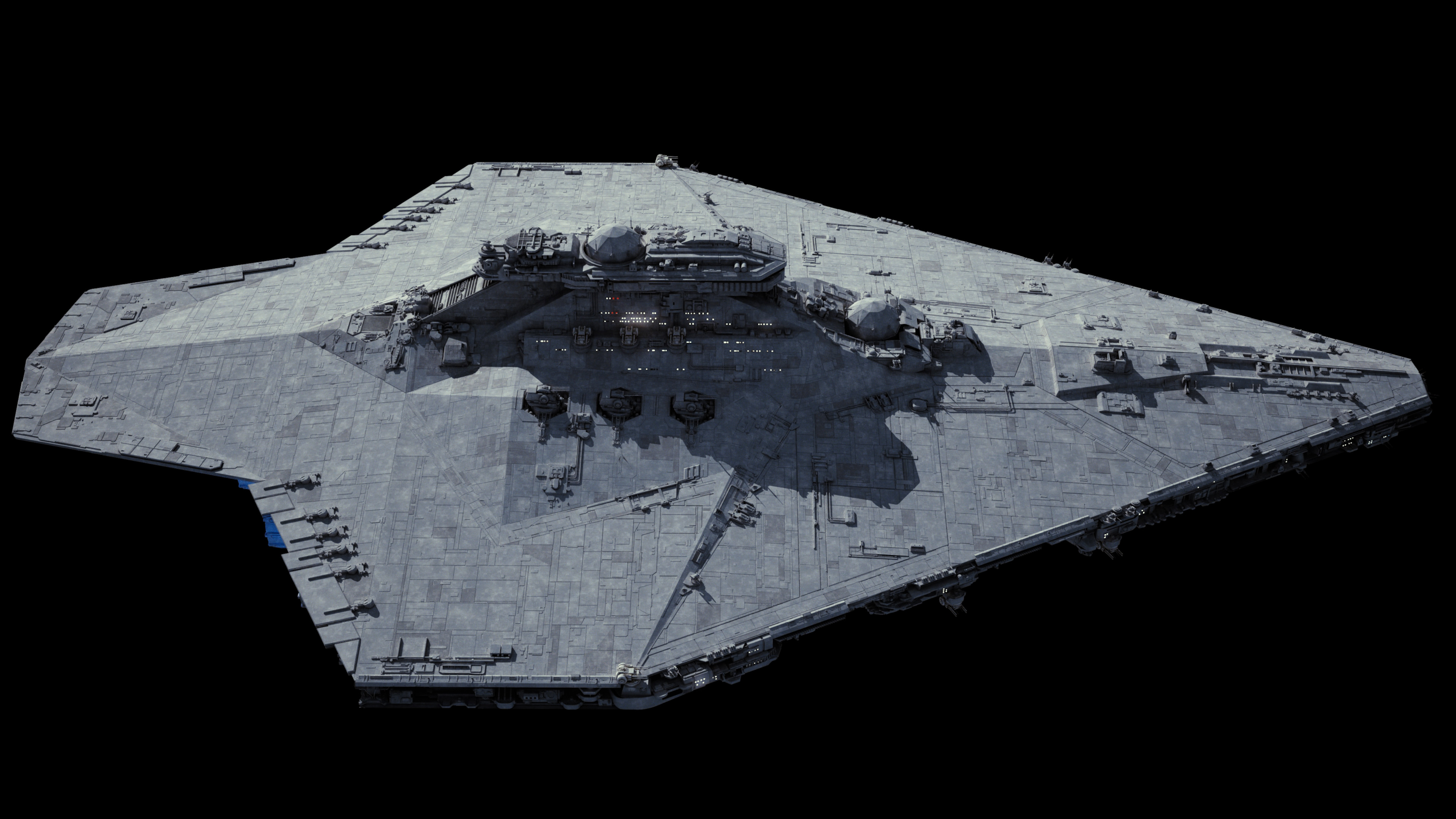 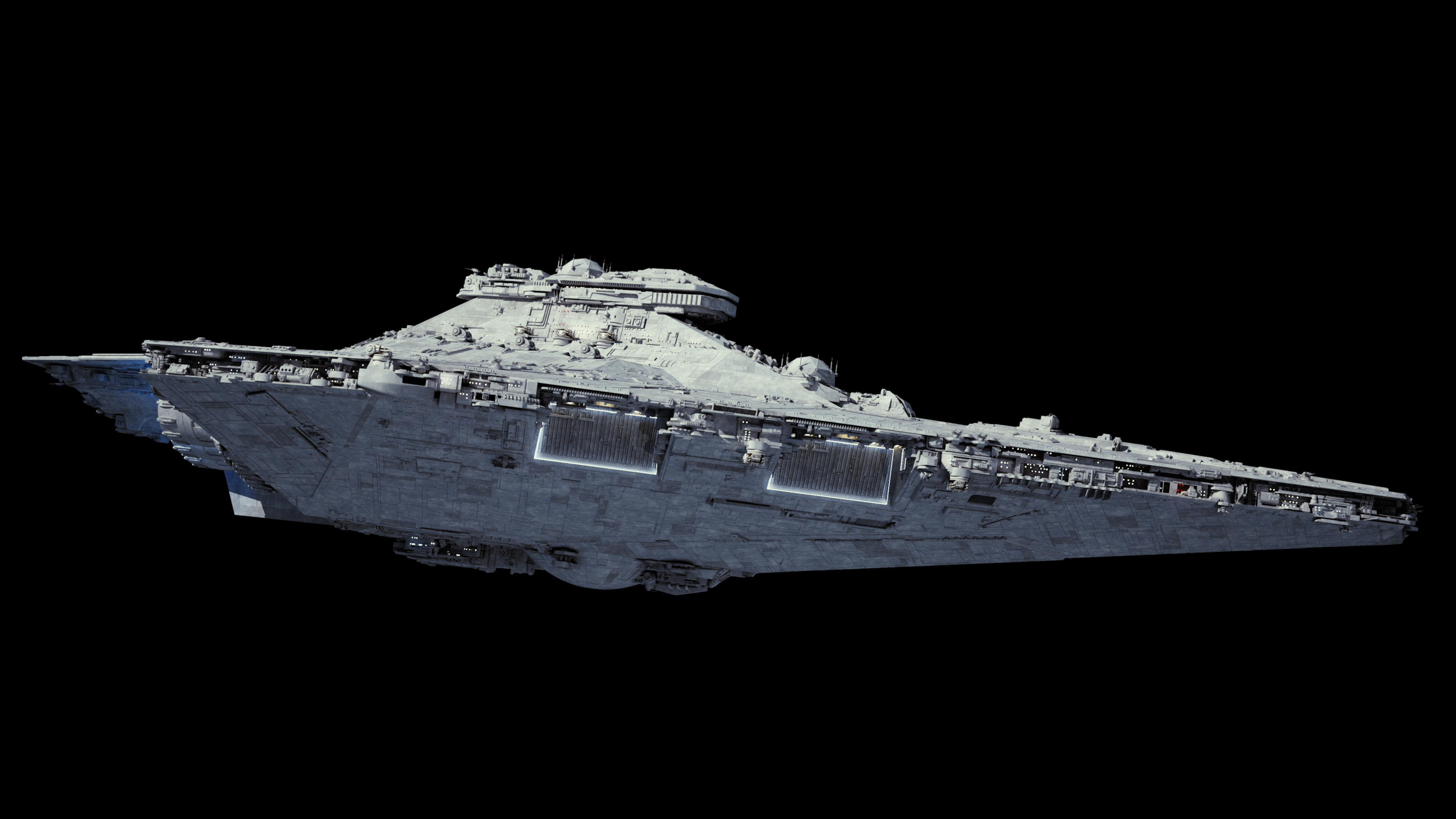 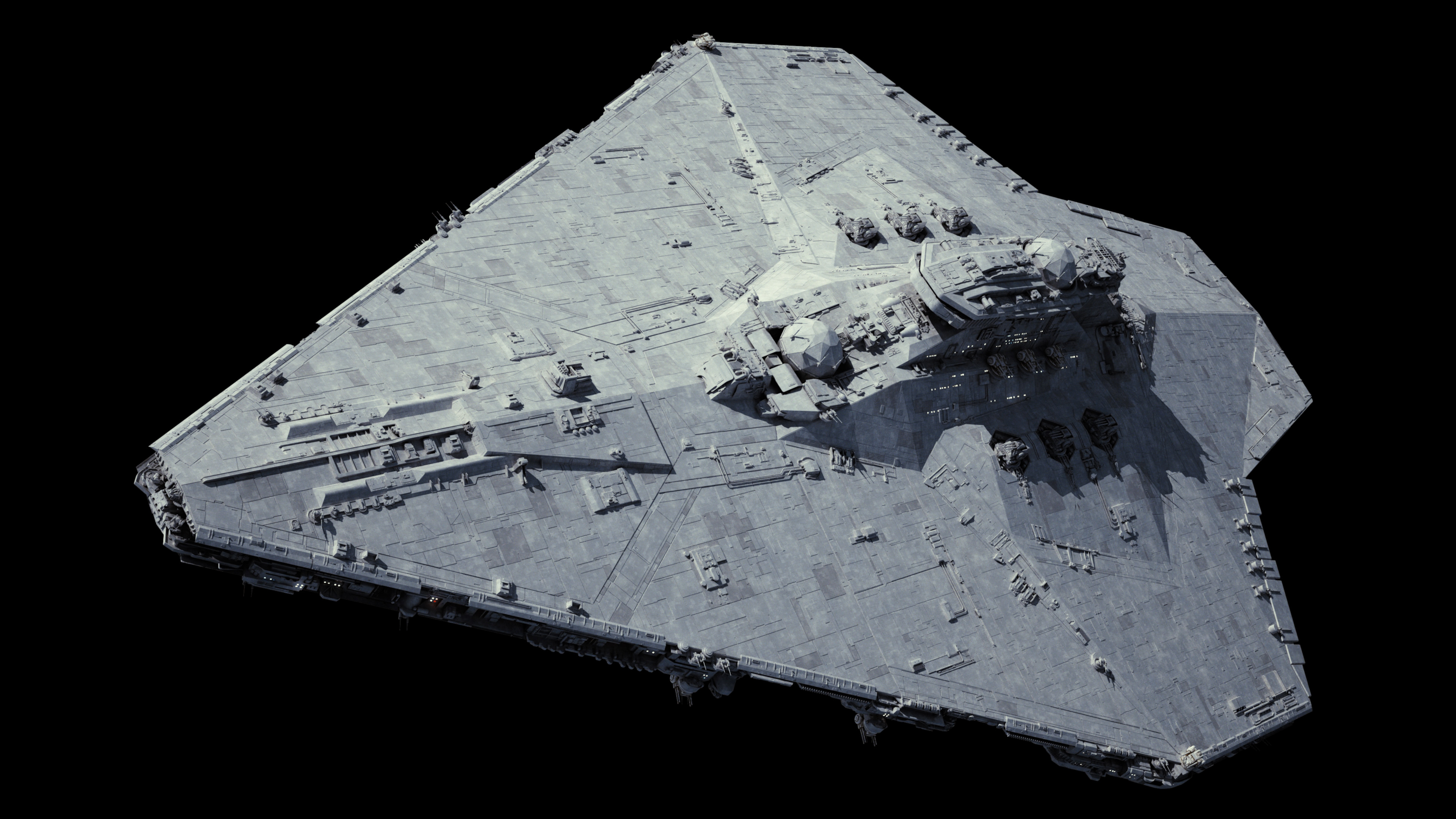 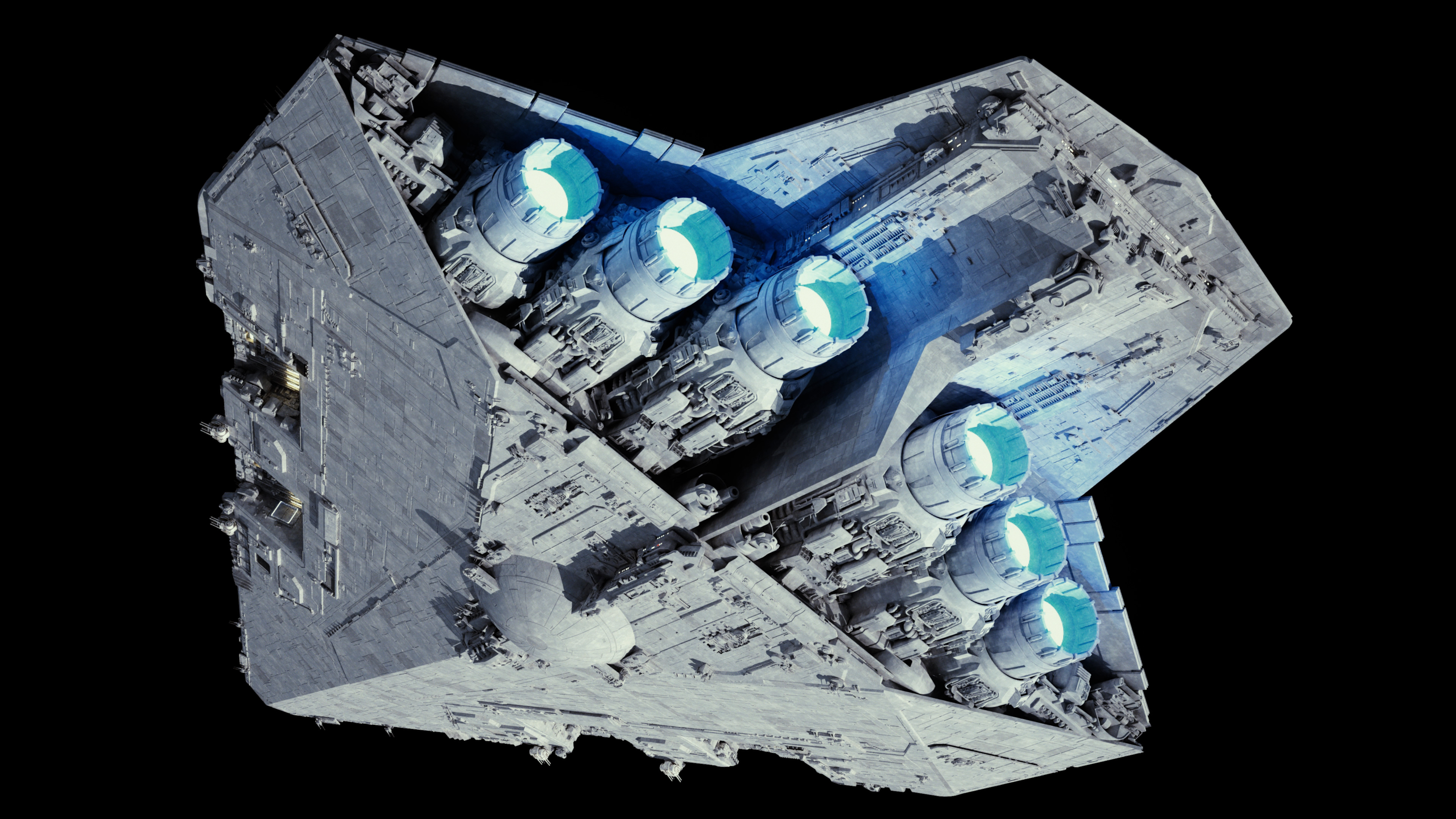 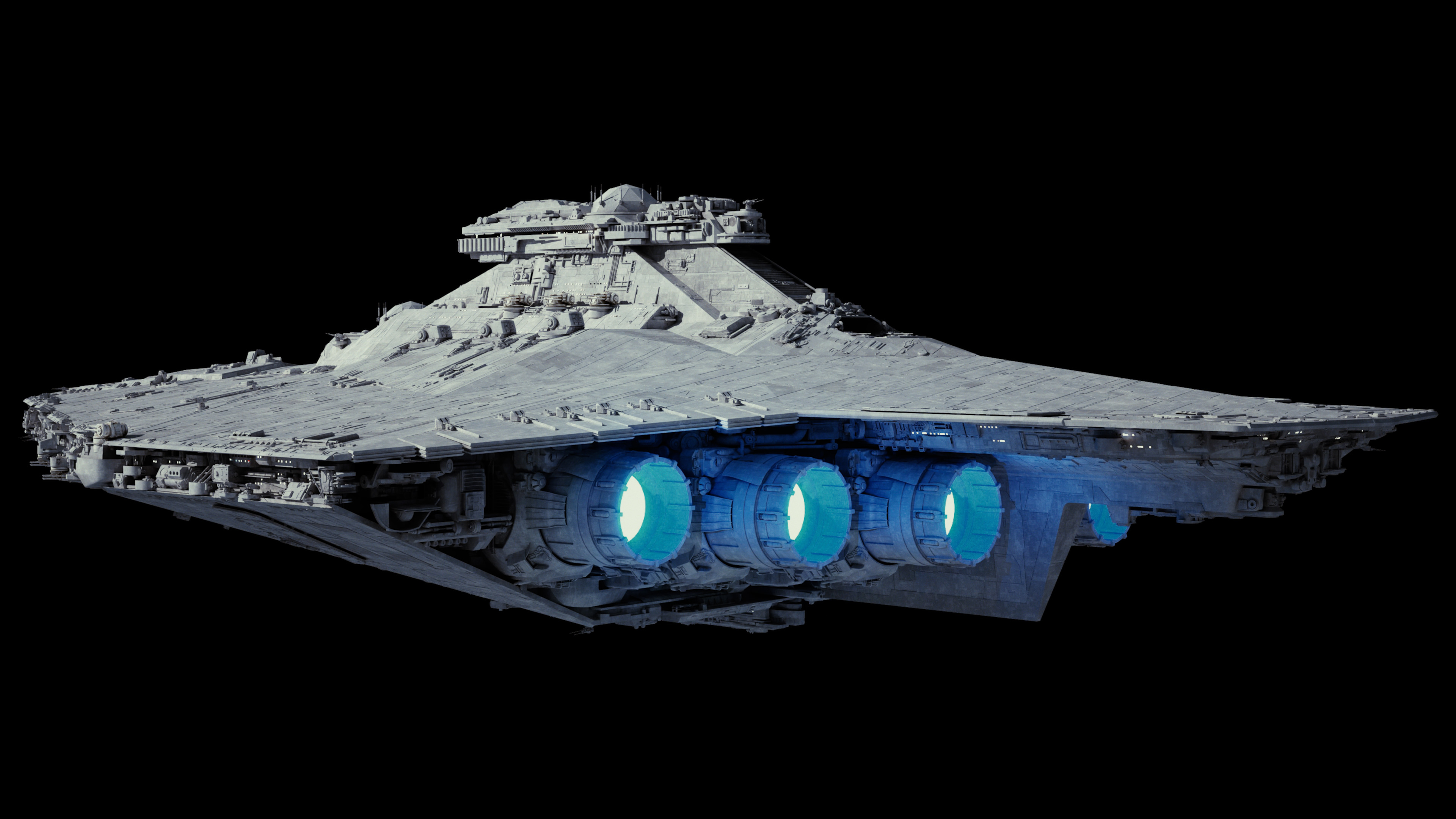 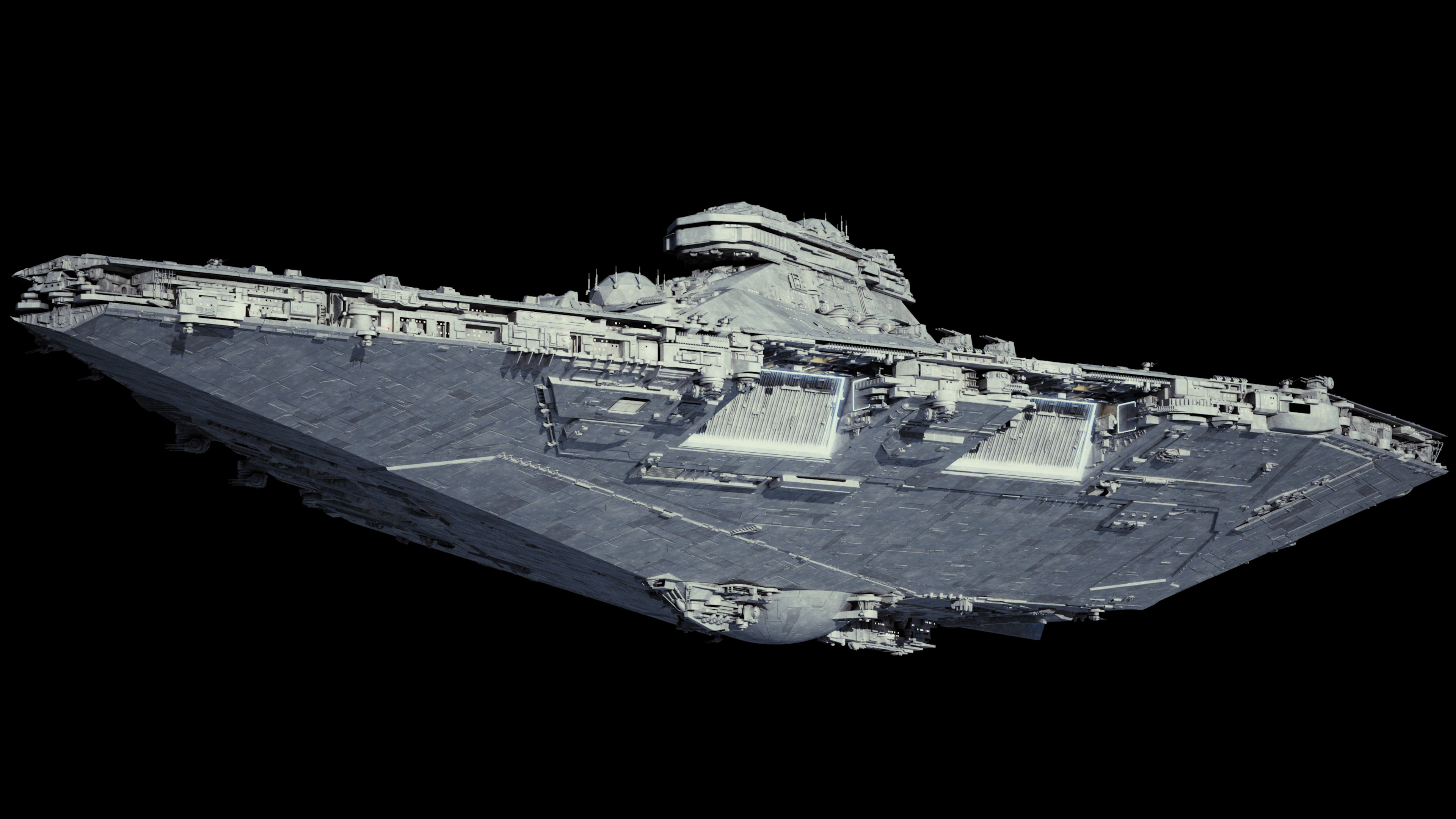 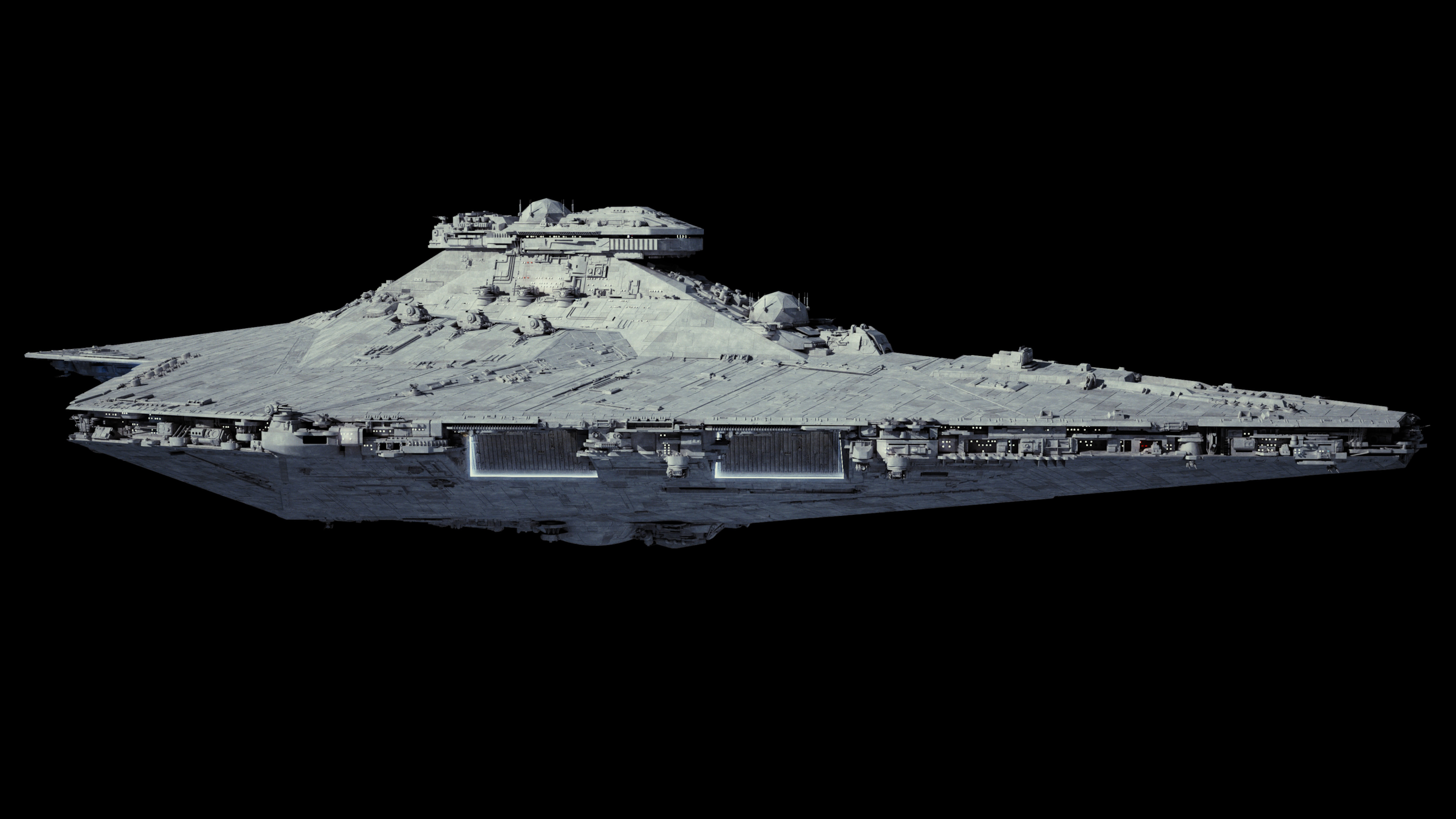 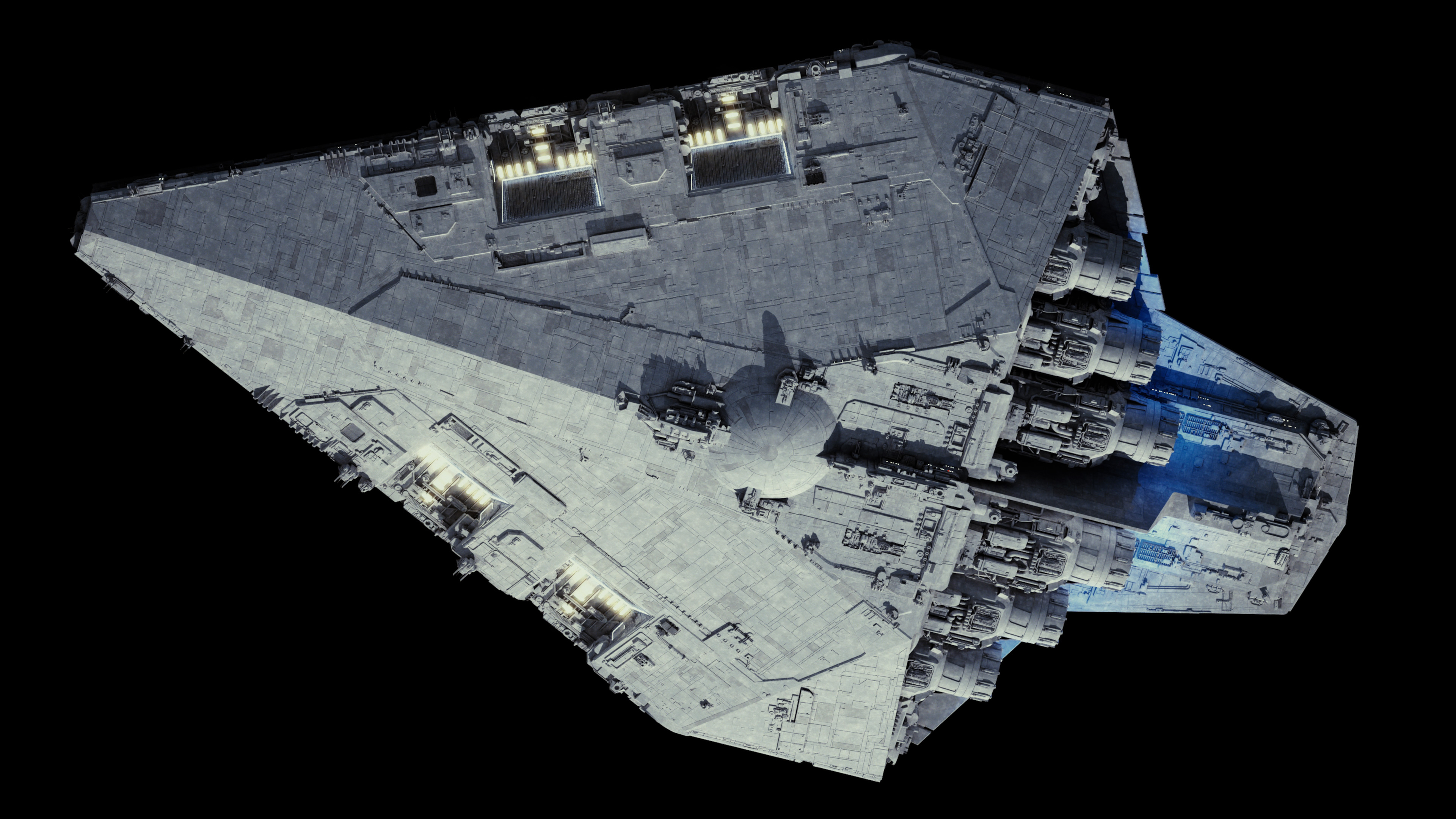 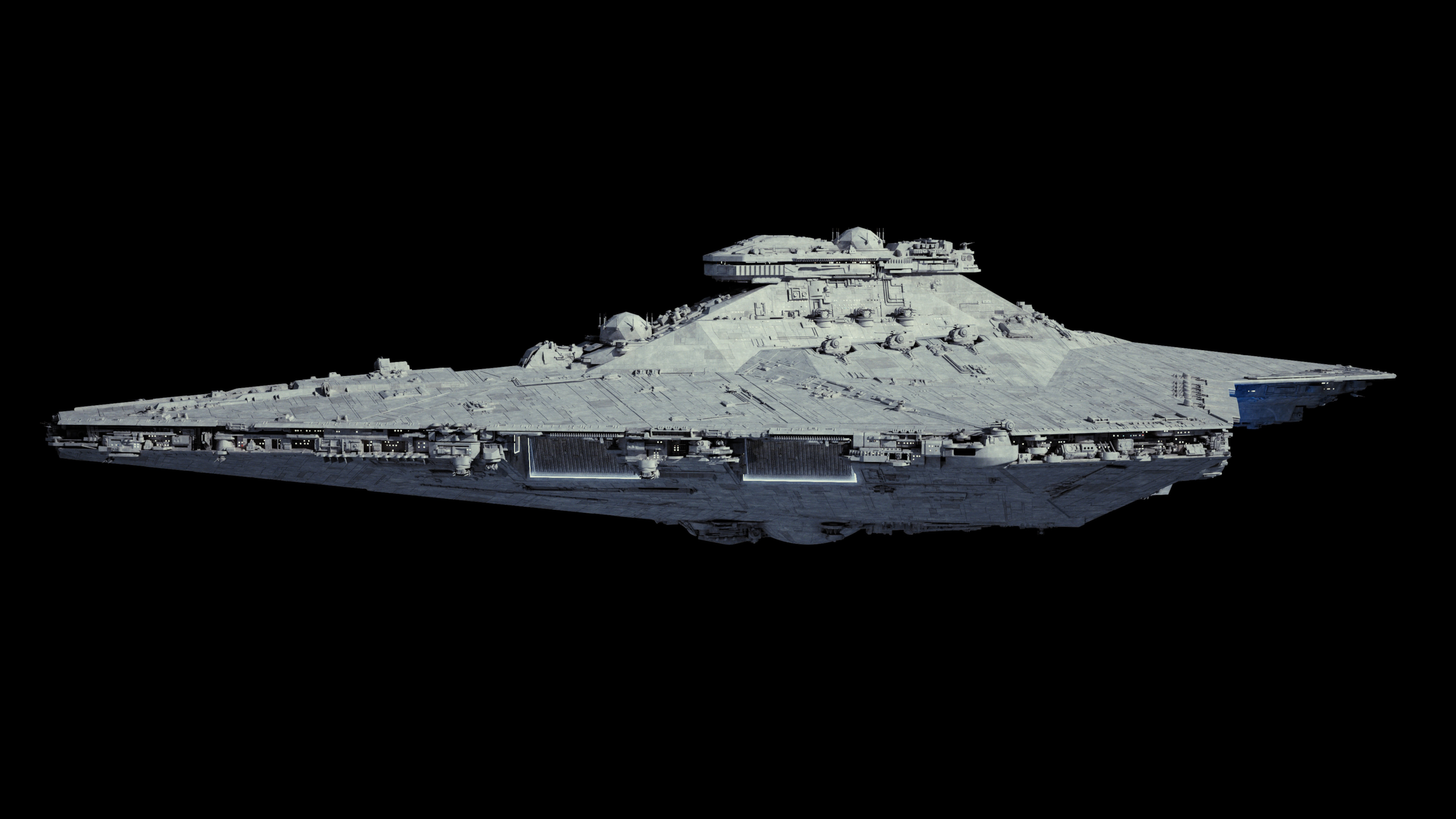 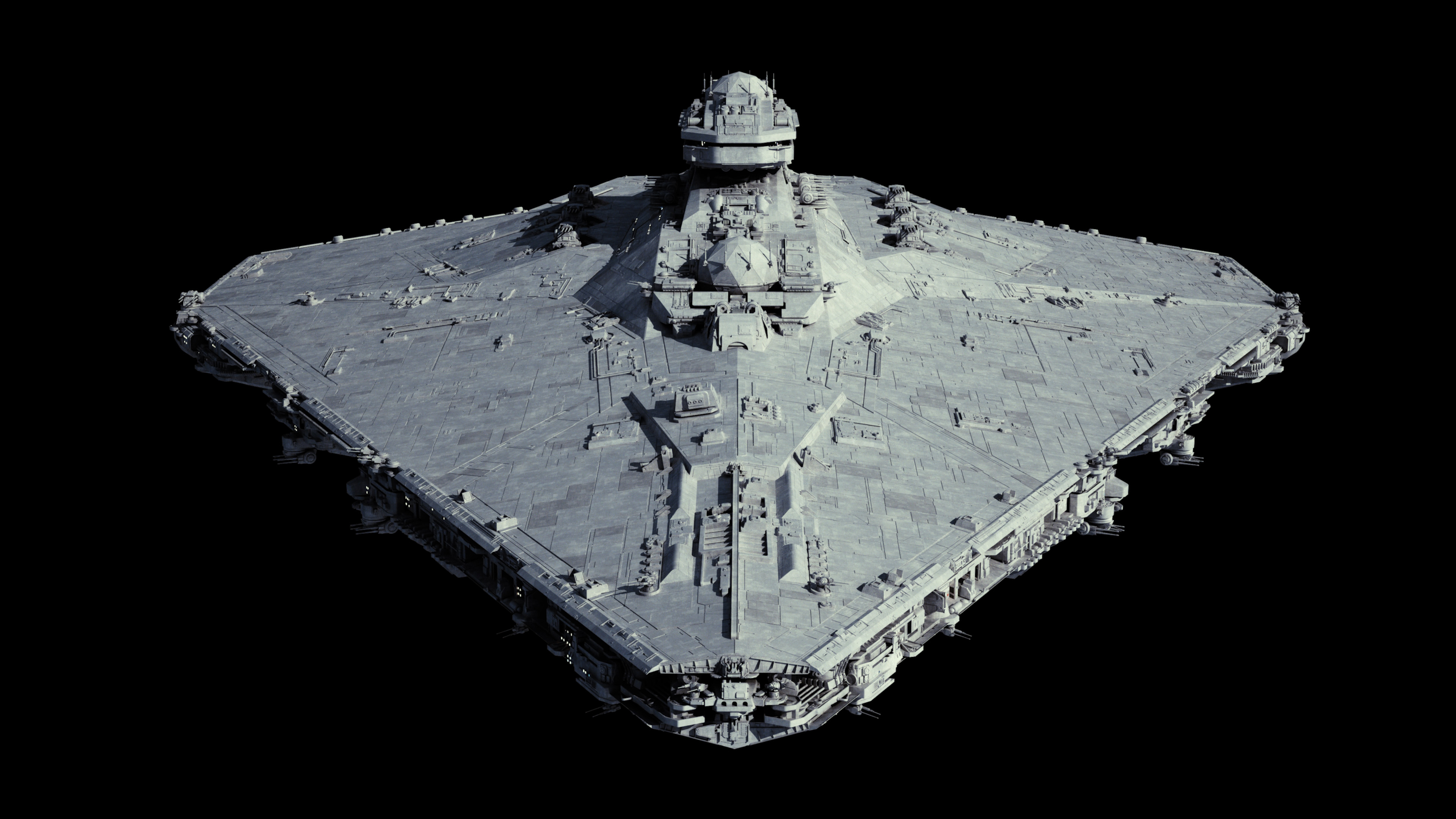 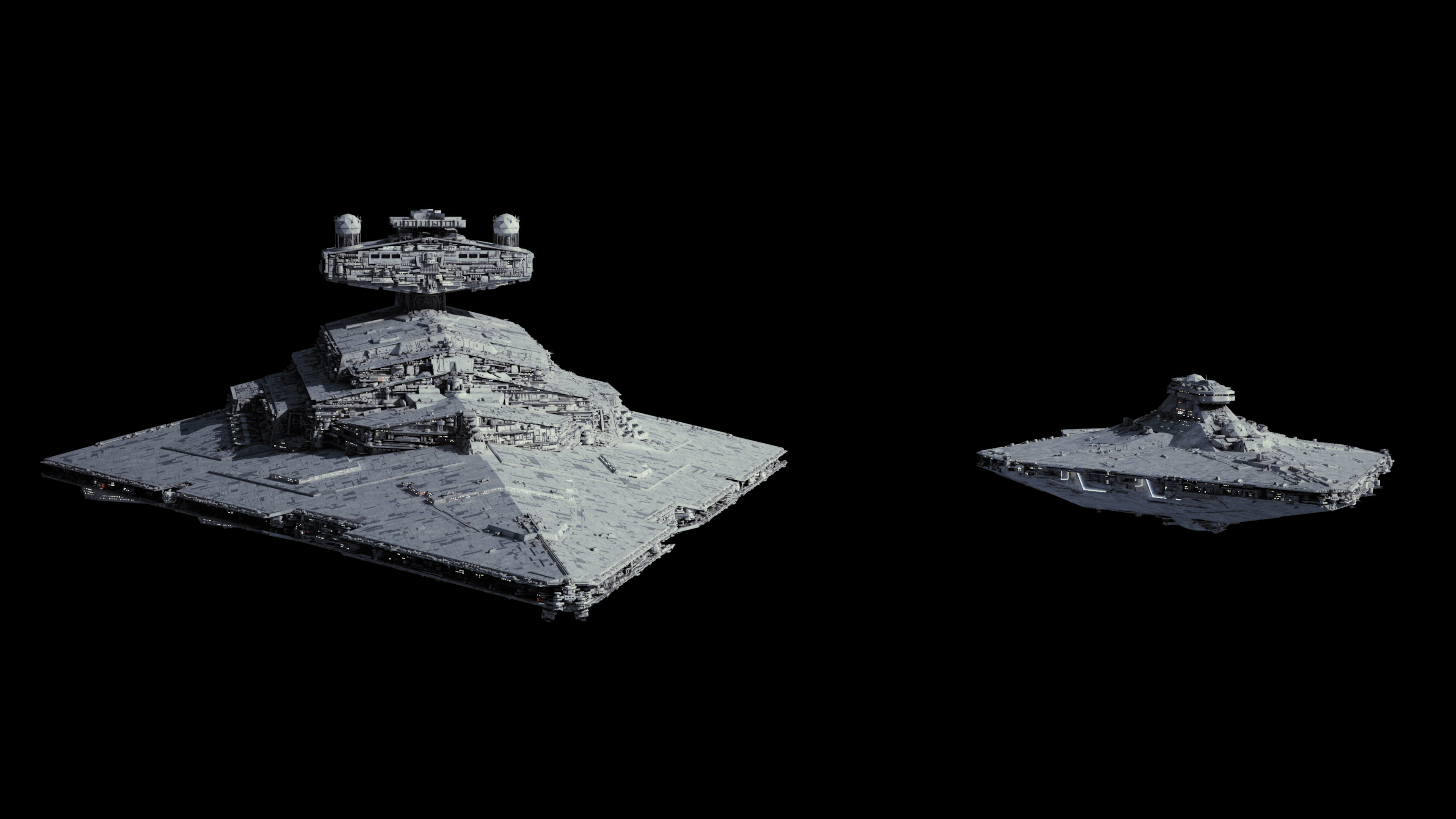 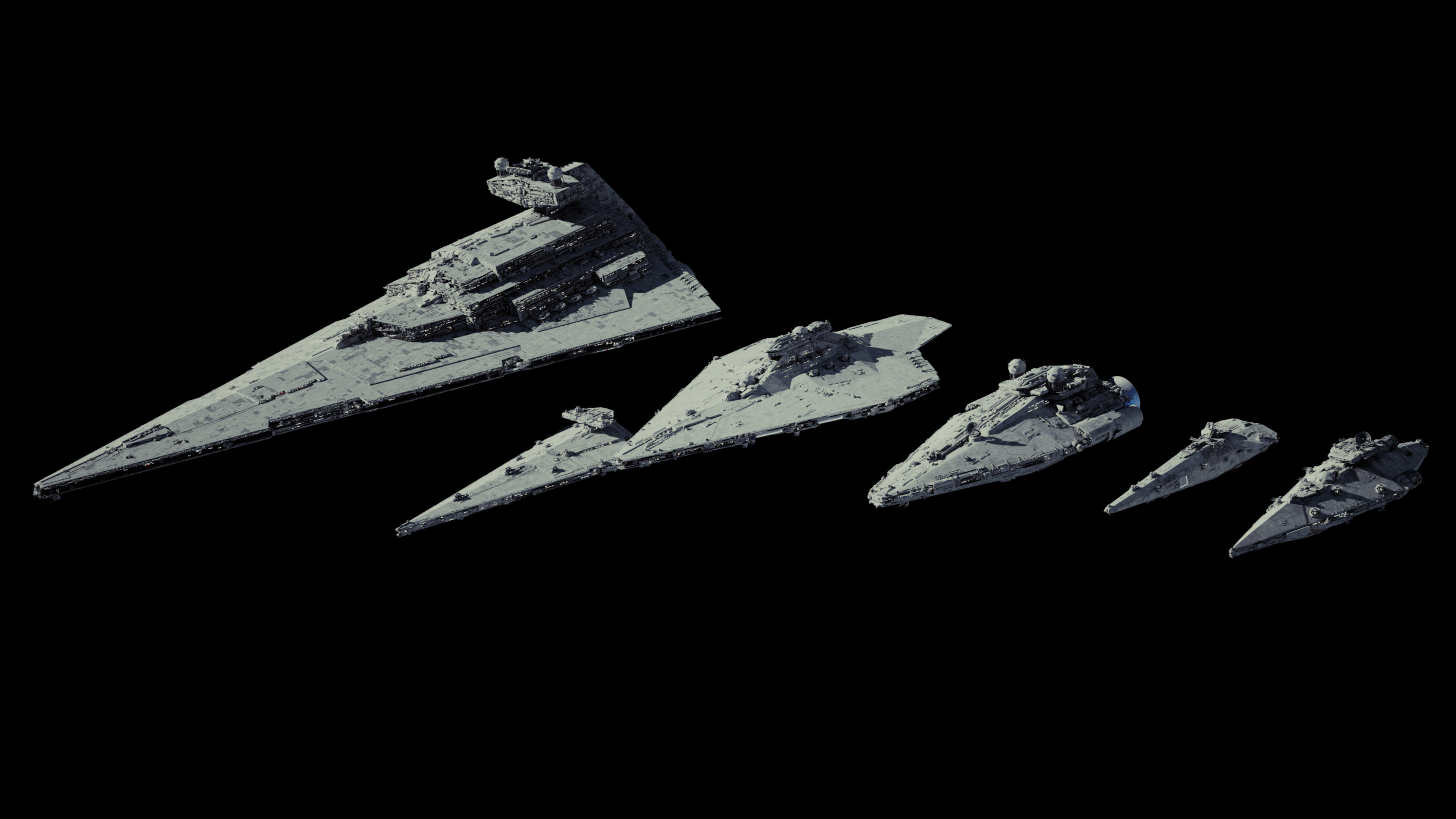 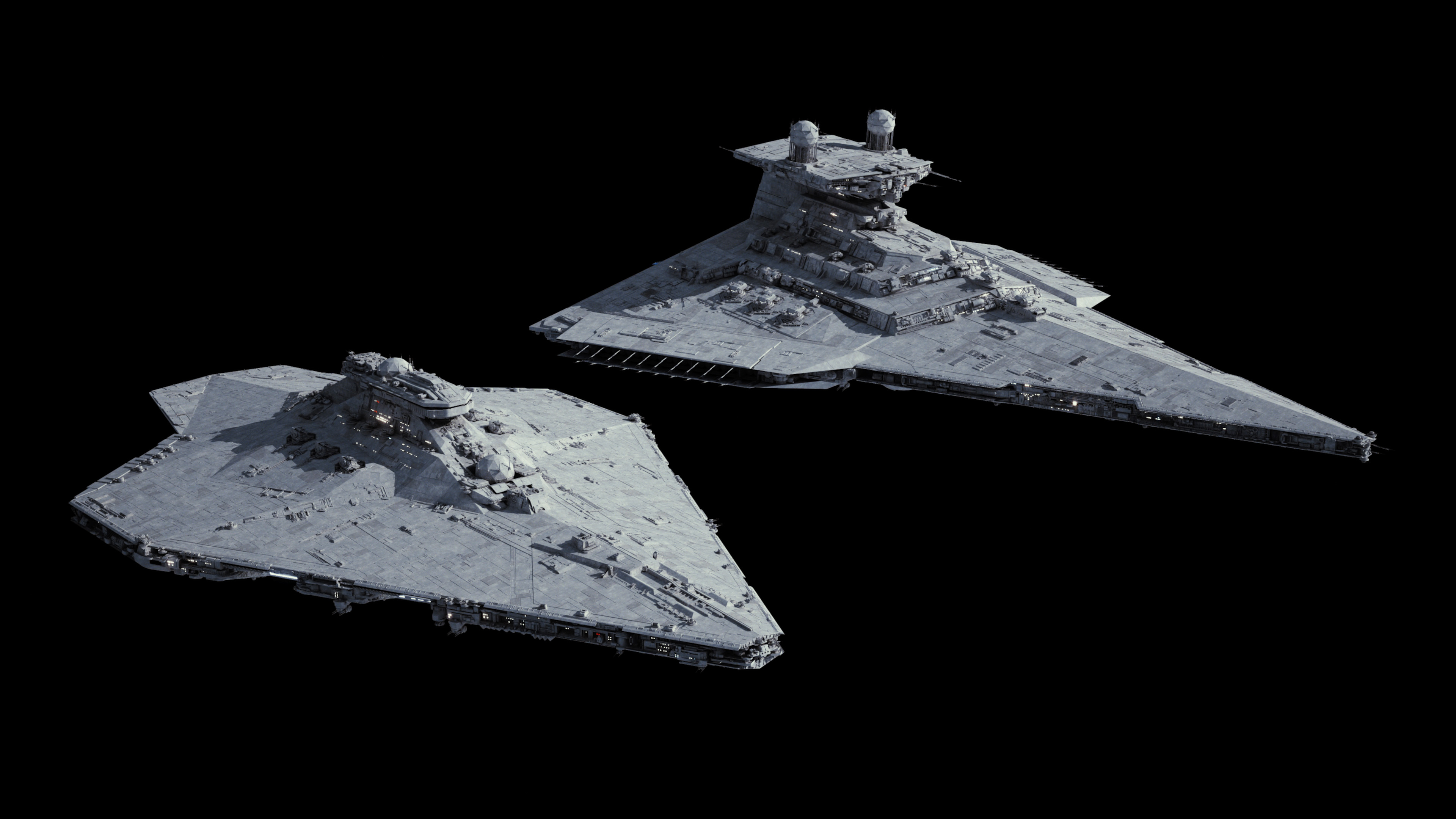 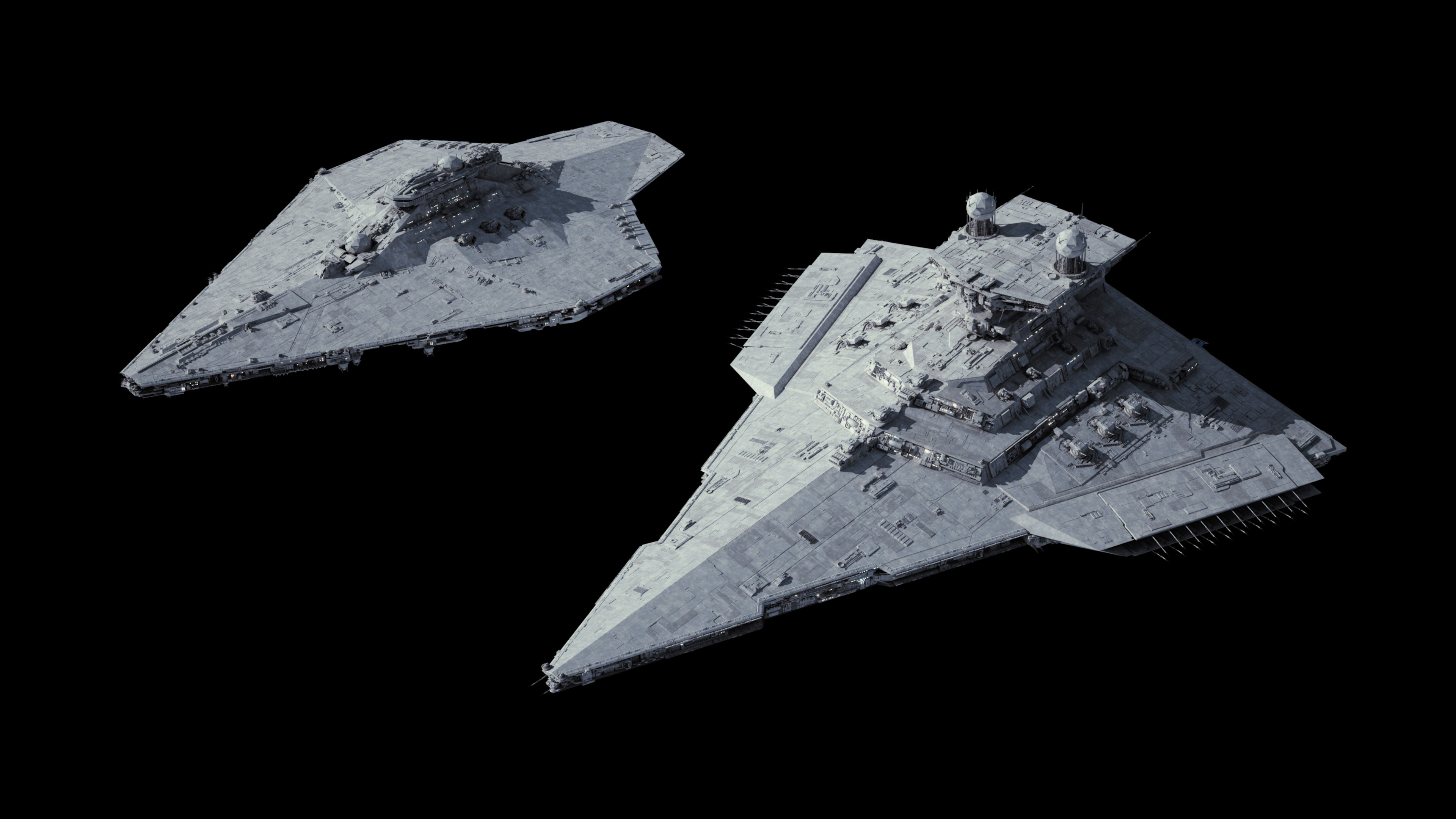 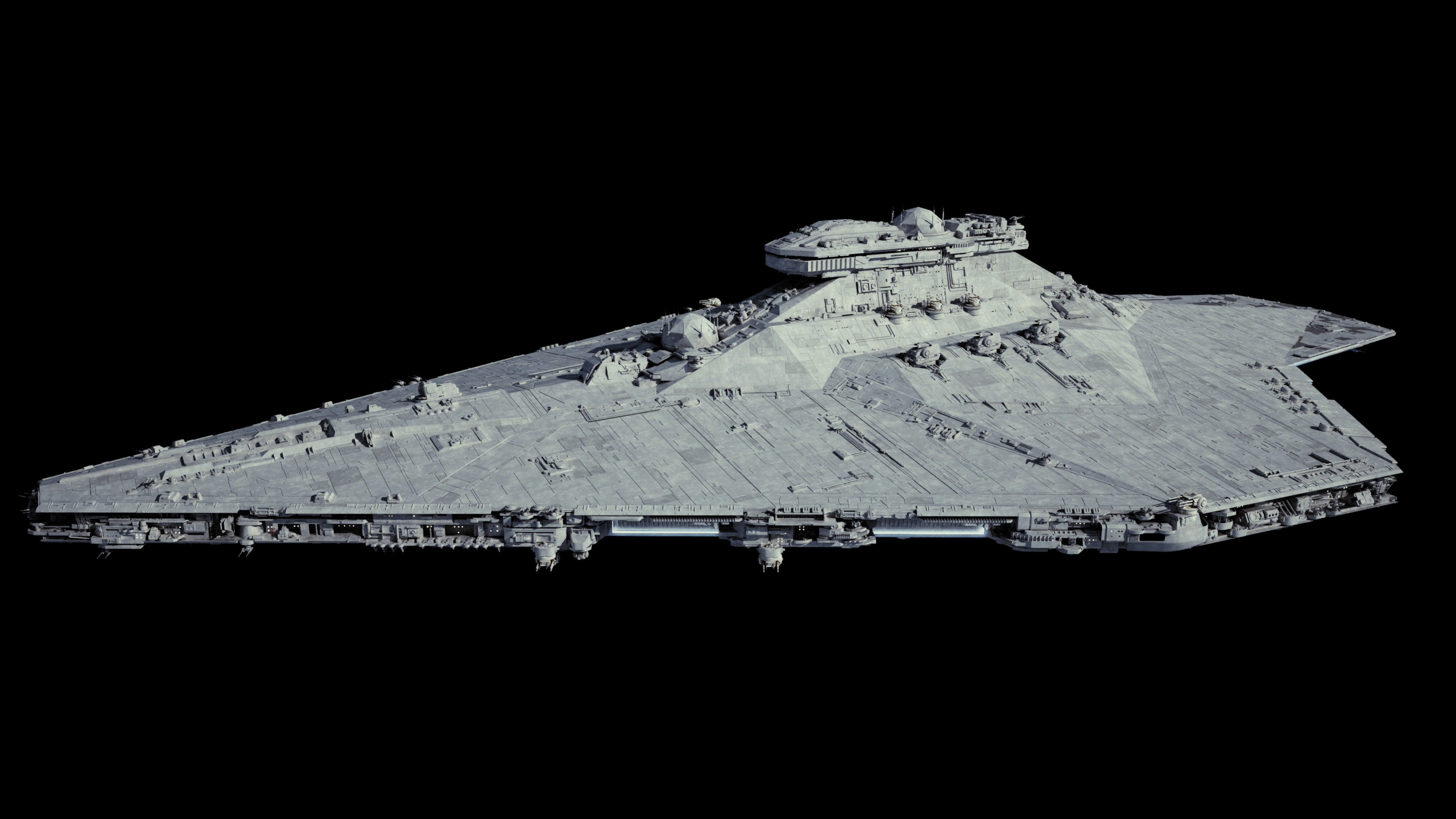 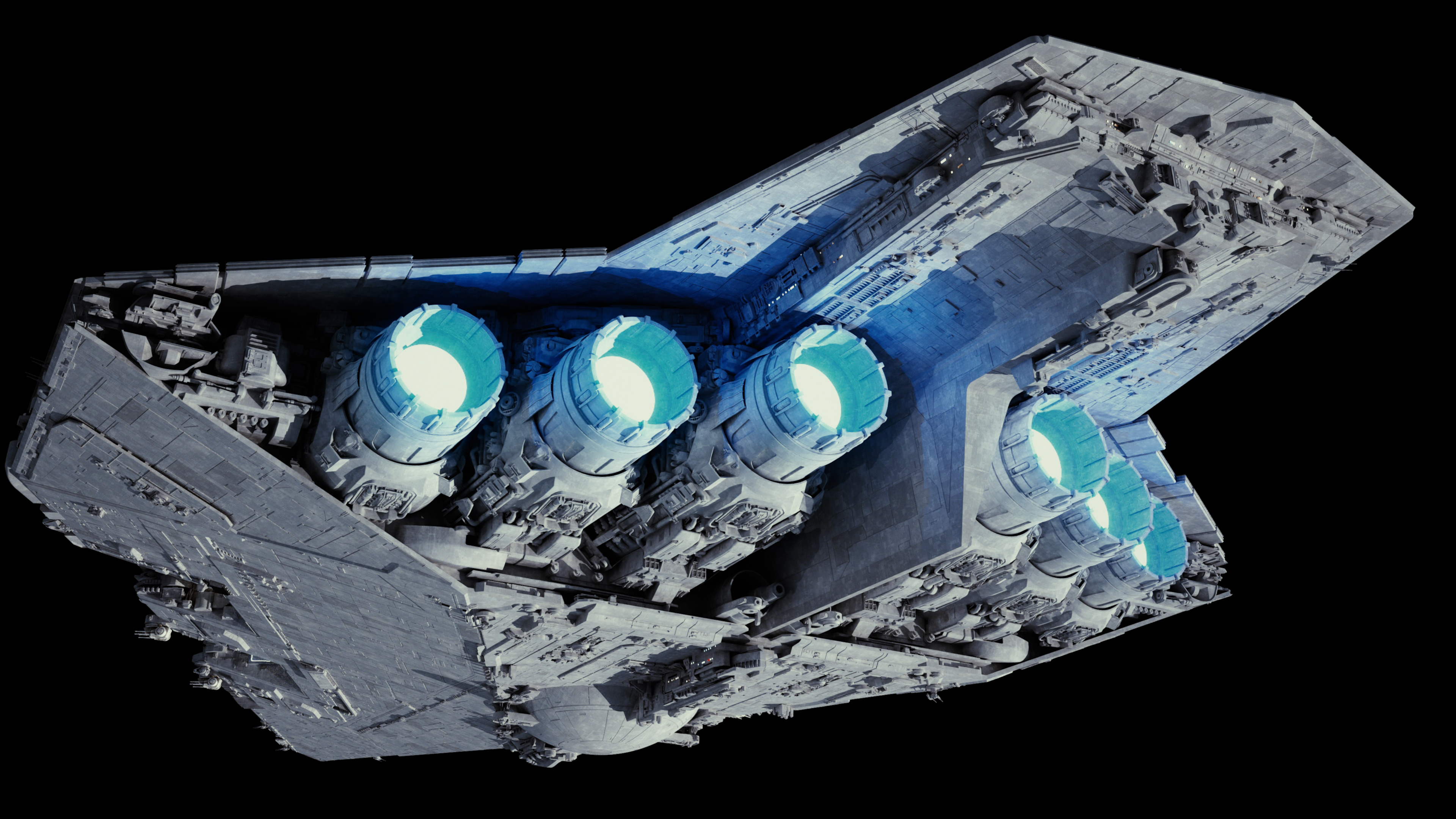 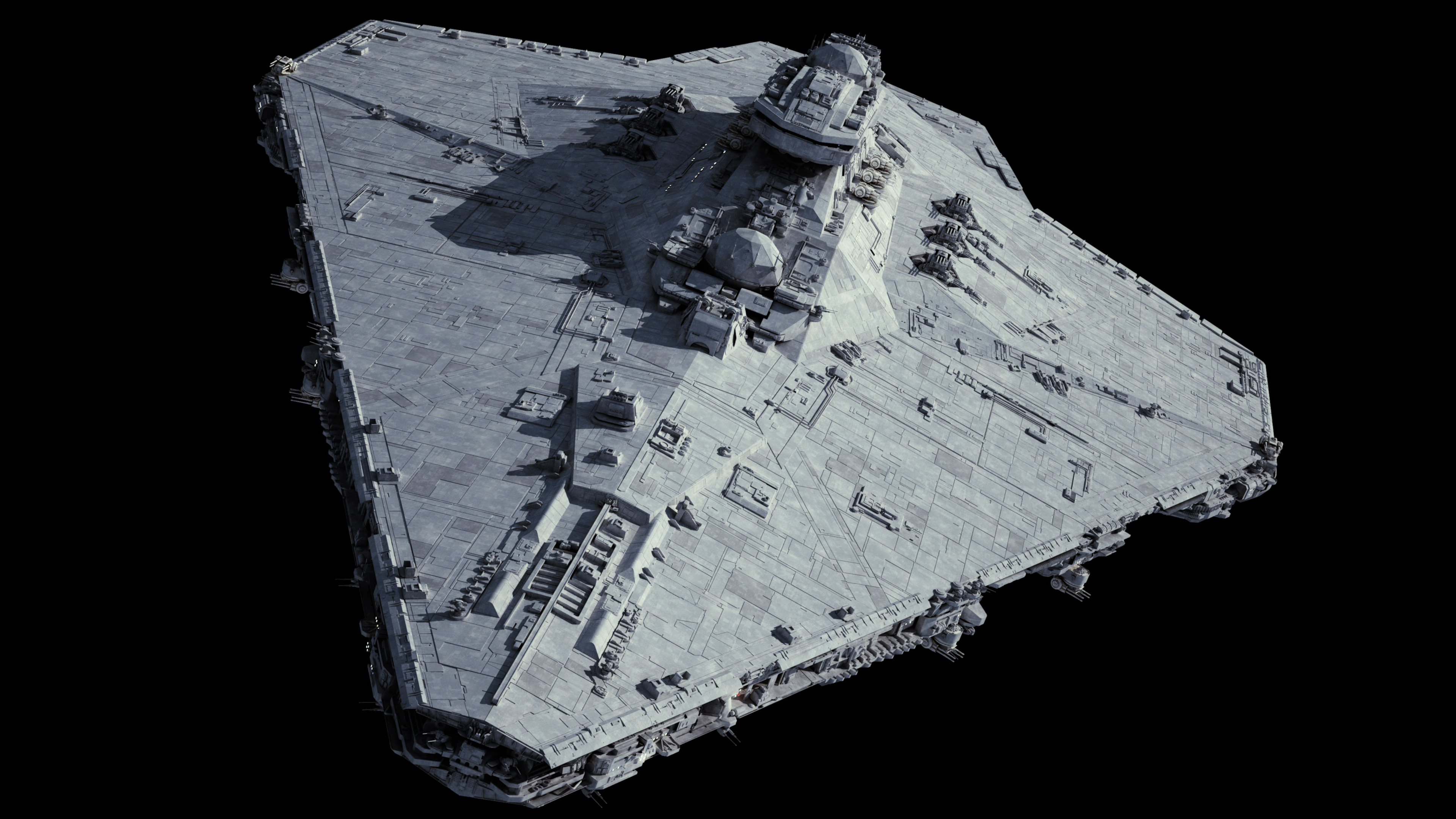 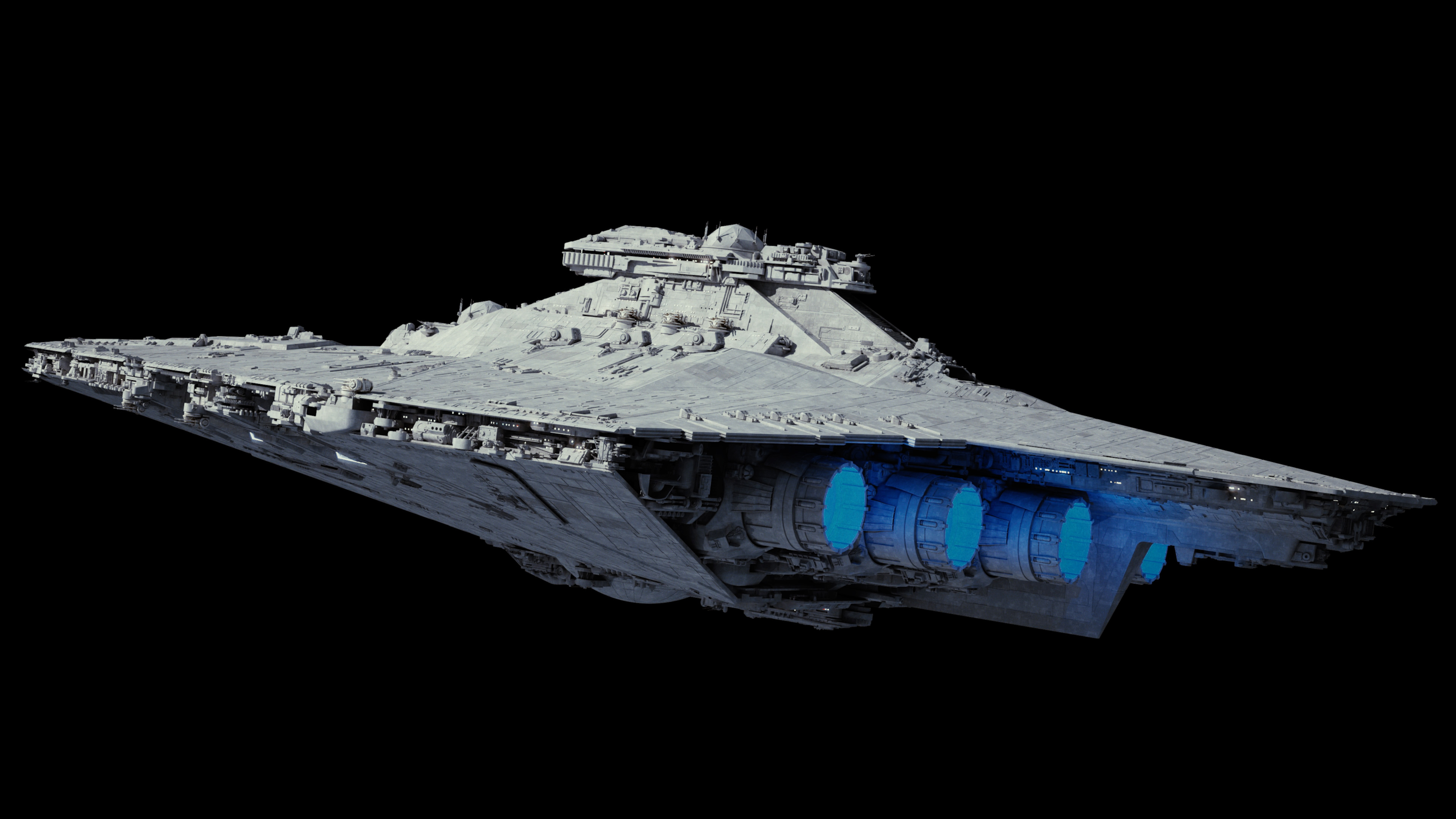 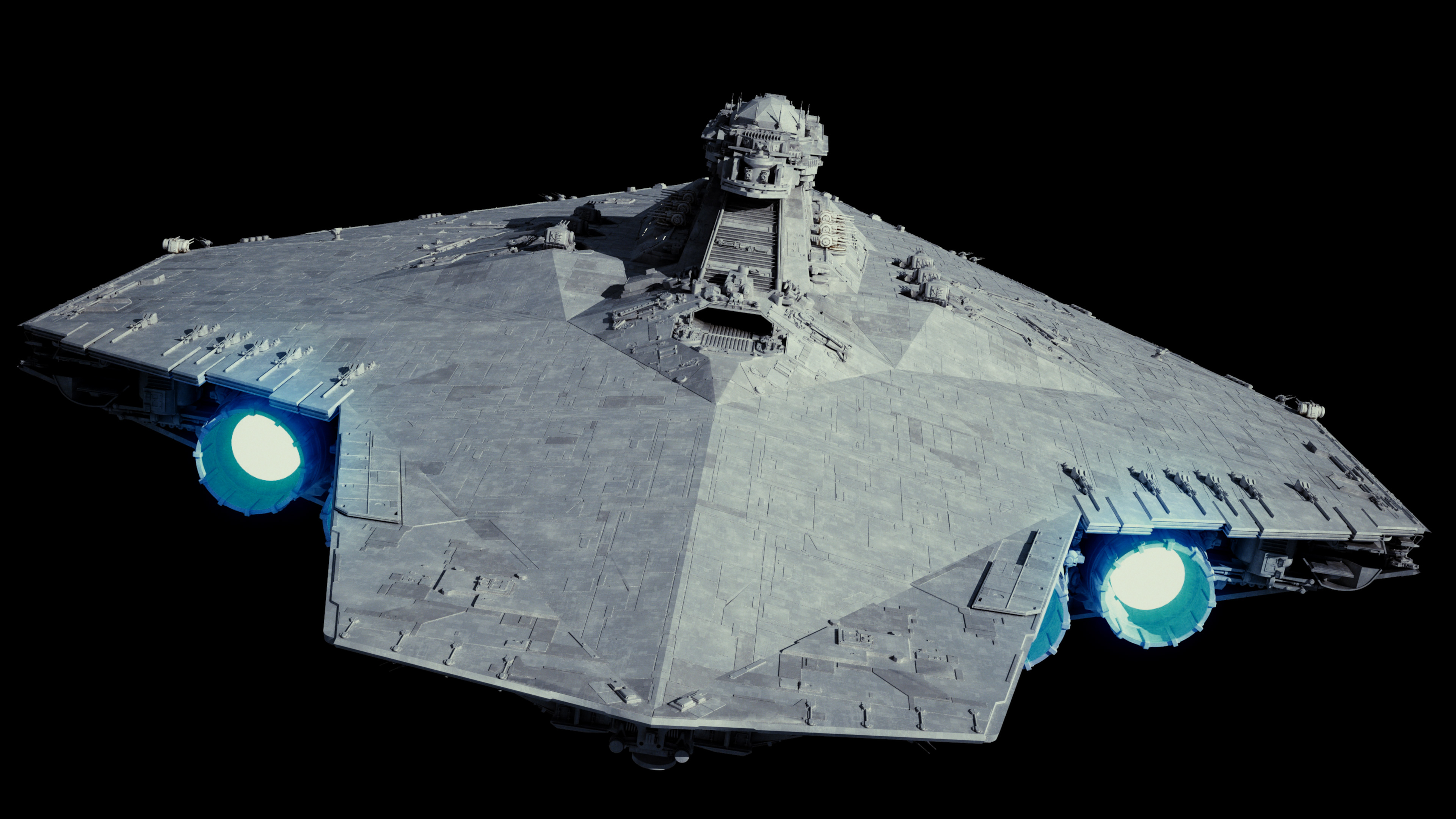 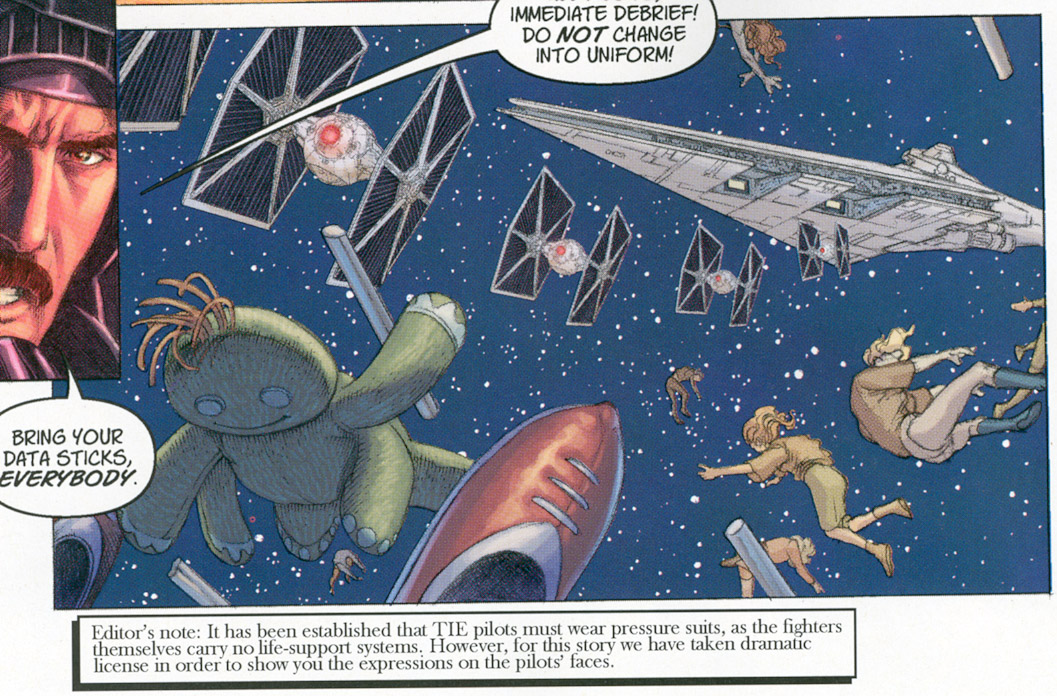 , a ship that’s class was never named and which Biggs Darklighter lead a mutiny on. Nicely done.

Amazing work as usual! Reminds me a lot of the Nar Shardaa SD from the Force Unleashed. Not enough love for single-styled venator command towers.

So the fighters come out from the back? That’s pretty ingenious, just like the Kandosii-class Dreadnought.

The fighters come out of the giant side hangar bays – they just have doors.

So it’s basically an updated Acclamator Assault ship, but what is it’s role since you’ve the larger Consolidator-class Corps Assault Ship? The later looks like an even further upgrade of this one.

This is the Acclamator’s ancestor. This was a main line warship before the Clone Wars. When KDY needed to design the Acclamator, they stripped the Proclamator design down to only what an assault transport needs, switched some parts for more suitable alternatives, and there they had it.

Now, all we need is a paint job to show what it looked like as a Republic ship.

Most of you are probably familiar with the Acclamator Assault ship. It was that little “Baby’s first Star Destroyer” ship we see in Attack of the Clones, that gets sidelined for the Venator in Revenge of the Sith. What you are probably not familiar with is a little bit of trivia I stumbled upon while nerding around on Wookiepedia: the Acclamator is stupidly overpowered.
Allow me to elaborate:

1.) Speed-The Acclamator has a .6 hyperdrive rating. To put that into perspective, the Fucking Millenium Falcon has a hyperdrive rating of .5. This is stupid fast, to the point of being broken. (To be fair, some sources list it as a .75 rated hyperdrive, but that’s still crazy fast).

2.) Weapons and fighters-The Acclamator has quite possibly one of the most well rounded armaments of any star wars ship, especially Star Destroyers. 12 Quad turbolasers and 4 torpedo/missile tubes is more than enough to handle just about any capital ship threat in the galaxy. In addition, the Acclamator also has 24 point defense lasers, which is 24 more than the ISD has. The best part is, if you don’t think your Acclamator is up to a certain task, you can just modify it until it is! Not enough starfighters? Just convert all that massive troop space into fighter space, and you get a dedicated carrier that can hold more fighters than an ISD. Want more weapons or greater survivability? Just modifiy it into the “assault variant” or build an Acclamator II!

Maybe this isn’t enough for you. Maybe you would rather have a Venator or an ISD. Perhaps I can…persuade you otherwise…

​3.) Cost: The Acclamator is about 30 million creds a piece. That means you can buy two Acclamators for every Venator (about 60 mil), and five for every ISD (150 mil). This might seem worth it to some of you, as those ships are bigger and badder, with more guns and a bigger fighter complement (compared to the stock Acclamator anyway). However, there is one final nail in the coffin of every other capital ship in the Star Wars arsenal:

In conclusion, I don’t know who made the specs for the Acclamator in the old sourcebooks, but, whoever you are, you accidentally created the best capital ship in the entire franchise.

An interesting point. Slight nitpicking though:
1. The reason why the complement of the Acclamator is one tenth of the Venator is the fact that the people needed to operate all the heavy walkers or fighters are actually listed as passengers that it carry (16,000 clone troopers I might add). Although, yes it can operate all the system fully without fighters, the Clone Wars era Republic has a more fighter intensive doctrine than the Galactic Empire thus the ability to carry fighters are far more essential. Which neatly brings us to the Venator with 192 V-wings, 36 ARC-170, and 192 Eta-2 fighters. That is 420 fighters alone, and we haven’t mentioned the Y-wings and other spacecraft. I think that is the one of the main reason why it need 7,400 crews, the Airwing was included in the complements alongside with the ship’s needed crew. Thus I am pretty sure, once the Acclamator is modified to take fighter, the number of crews it needed would swell up as well. Real life example would be the Nimitz class aircraft carrier (which only carry 90 aircraft mind you): ship’s company (3500) + Airwing (2500) = 6000 crews.

2. The ISD is built for an entirely different doctrine to the Acclamator as it is much more built to duke it out with capital ships and overwhelm through superior firepower. I don’t particularly like this doctrine anymore than you do, it’s just not as effective as a decent capital ships with ridiculously good fighters and bombers, but that is the doctrine of the imperial navy. The acclamator just doesn’t fit the bill of being intimidating enough I guess.

While the ISD is meant for projecting power and intimidation, not being efficient. The Acclamator hits a home run once again on both of those points. As you the Acclamator can carry 16,000 troops in its hull, and their heavy equipment, tanks, aircraft, along with a starfighter complement to boot. The Acclamator can also land and rapidly disembark troops directly, without needing to rely on landing craft like the ISD. And, as established earlier, the Acclamator is stupidly economical, so it’s very likely that there will be more than one Acclamator in any given operation. As for the Intimidation factor, do you honestly think the average galactic citizen would notice the difference? The Acclamator can still glass their world from orbit, and it can still land thousands of stormtroopers and fill the skies with TIE fighters.

Sorry for intervention, but I really think that you underestimating the ISD capabilities in your assesment.
First things first, intimidation effect of an ISD was DEDUCTED from AARs which Tarkin had at his disposal, and was not what the designers had in mind. Original purpose of its design was to be self-sufficient unit which could perform a wide spectre of missions and maintain the edge over threats it can potentially encounter (its only a destroyer after all).
As for those numbers of passengers and fighters, ISD is clear winner, because volumes work that way. Stated numbers heavily imply that they are just average across multiple Star destroyers, best suited for facing any threat out there without the need to specificaly kit your vessel out.
In terms of firepower, well theres no evidence to claim that every single ISD in the Navy has the same set of guns outside of main battery (especially since we know that things like that tend to change with refits IRL), and that main battery is by far superior to anything that Acclamators hull frame and reactor can support.

A fun fact – when the reactor power for the Acclamator was being calculated, it was based off a ship ~500m long. When the actual scale was realized, the reactor numbers didn’t snap back. It’s actually proportionately quite underarmed compared to hull volume. Straight up scaling from ISD you’d figure it to be ~1.2e24W vs 2e23W. That’s why Proclamator is calculated at ~1.2e24W. In universe, figure that the Acclamator powerplant is less powerful because it’s a transport not a warship, and so doesn’t need the maximum possible power density.

I dont think so. The turbolasers on a ISD are far more powerfull than the quads of the Acclamator. The Acclamator also isnt half a ISD in size because size expand in 3 dimensions, and the tail of the Acclamator is also very thin. You also talk about reconfigurating the complement of the Acclamator to carry more fighters than an ISD can. You forget a ISD can change its complement too, as dedicated carrier, a ISD can easily carry 3 times Venator complement or 800 TIEs + support craft. Its also very unlikely a ISD has no PD-turrets. We dont see PD from Acclamators in action in the movies, but we do see the ISDs fire guns from several spots on the hull, with blasts powerfull enough to damage (but not severe) the Tantive IV and destroy asteroids. Those blasts did not come from the 8 giant main turrets but from the smaller turrets. Even the main turrets can target starfighters.

This was my TED-talk. Thank you for listening.

While the main turrets and smaller guns can target starfighters, they aren’t purpose built for this, at least in an isd 2. Essentially, it’s like using a howitzer artillery piece to target a private jet. It can be done, but it’s not very effective. This is thanks to the Taking Doctrine, which caused the ISD 2 to be used in an all purpose, usually solo role, which is somewhat deviant from it’s weaponry being almost completely long range anti capital ship guns, excepting some other details such as their TIE complement. That’s not to say this was the case with all ISD 2’s, just the vast majority of them. I agree with those other points, however.

Recently at the Generation Tech youtube channel, has appered a video which explains why Acclamator class Assault Ship is one of the best Capital Ships in Star Wars Universe.

I always loved this ship. It seems a little lite on armament, but I assume that is due to the time period you say it is from, during the height of the Ruusan Reformation.

How many fighters does one of these carry?

4-6 squadrons depending on size and how many troops and vehicles also need to be carried. Hangar bay space is pretty flexible, but expeditionary ground forces and starfighters do directly compete for space.

I really love this design. It looks like it could fit in either Republic or Empire fleets. Coming here just makes me hate whoever picked the final designs in the Sequels!

Are the super firing triples new? I can’t remember if they were there on your earlier renders.

@Fractalsponge:
1) Will you ever do a Resurgent Class, and/or other imagined First Order warships? I’d think it would be especially cool to see a Resurgent render that elaborated on what is contained in the negative space at the front of the ship.
2) Have you ever done internal cross-section/cutaway renders of star wars ships?
3) Have you ever considered imagining what New Republic warships and design language would look like, say, 10-20 years after Endor. i.e. the fleet that was ostensibly destroyed by Starkiller base in canon? While I was generally happy with First Order warship designs aside from the TLJ dreadnought, one of my biggest disappointments with the new trilogy was not getting any truly new “good guy” ships.

I’ve long thought that the siege dreadnought should have been based on the Bellators’ frame.

This has always been one of my favorites of yours, only beaten out by the Bellator and Kontos

These new renders are a real treat! More please, lol. 😊