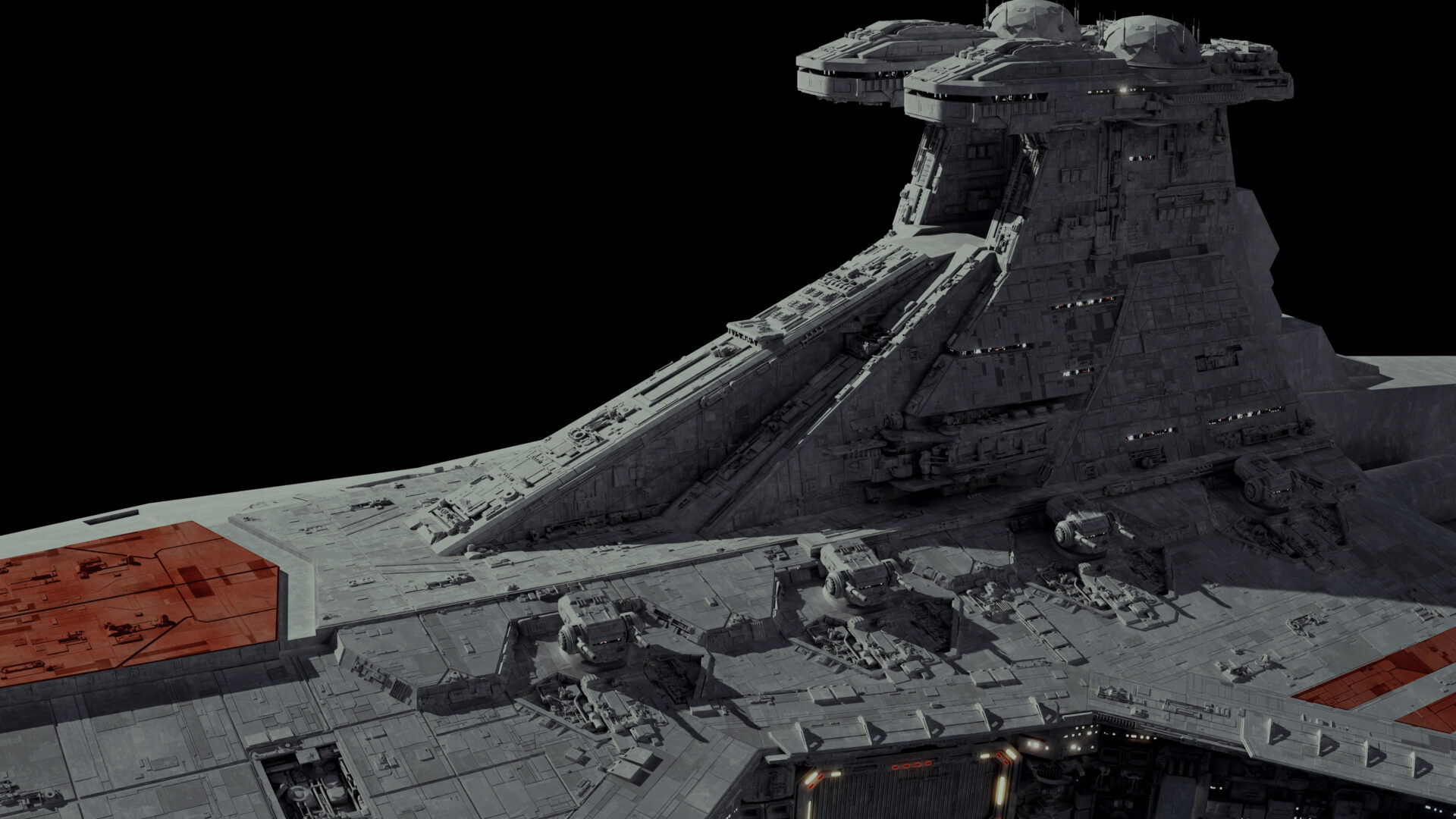 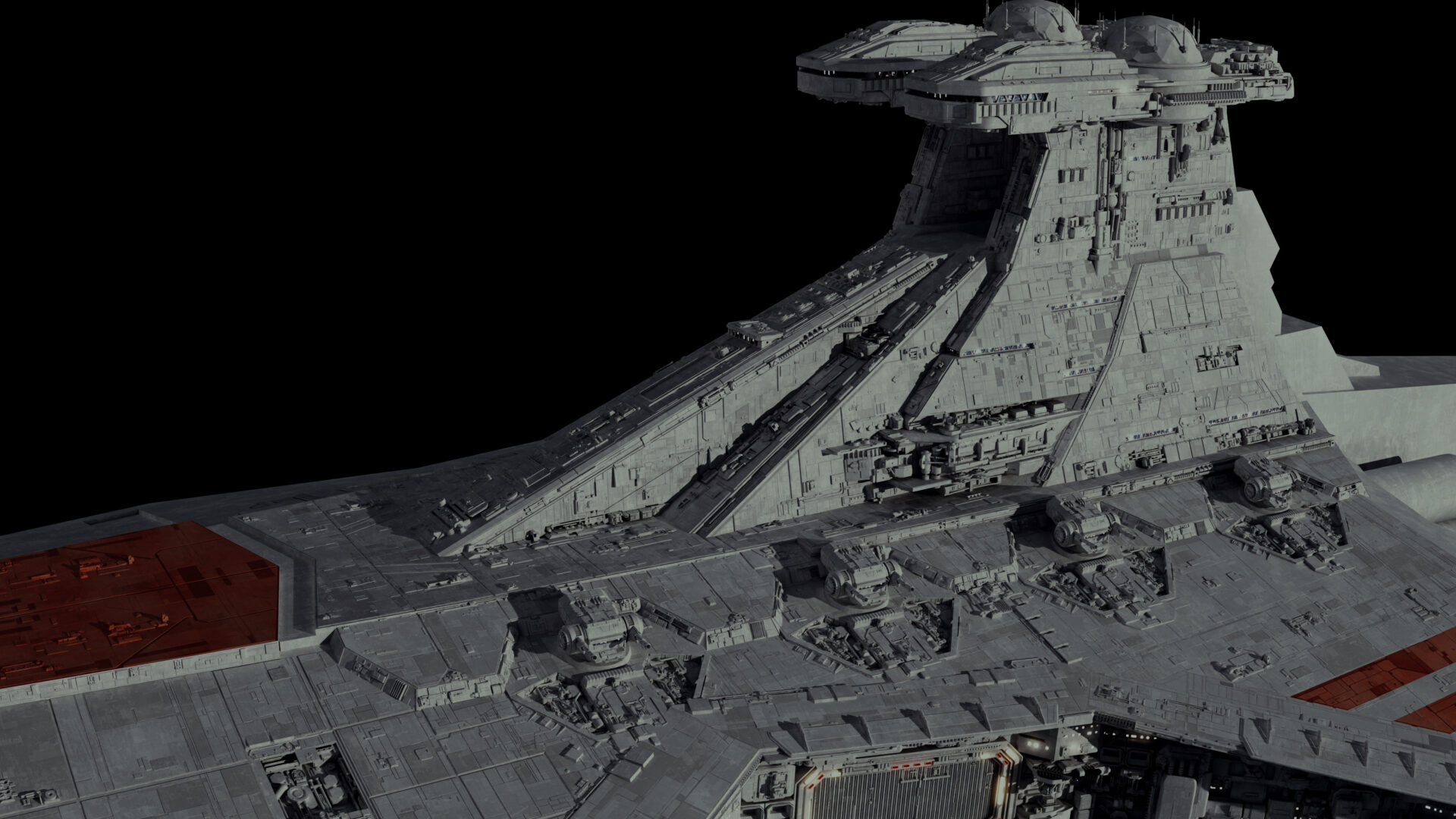 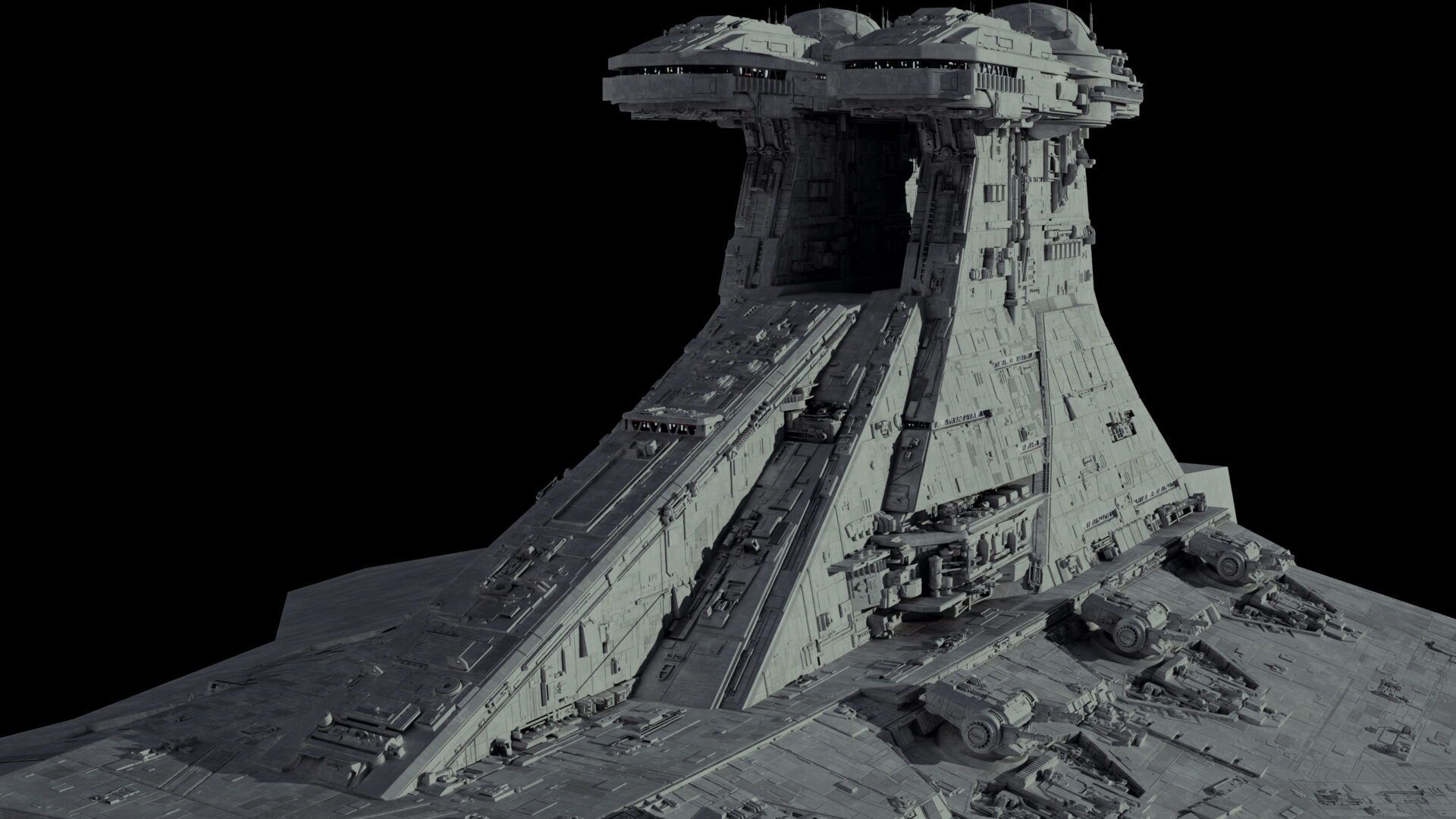 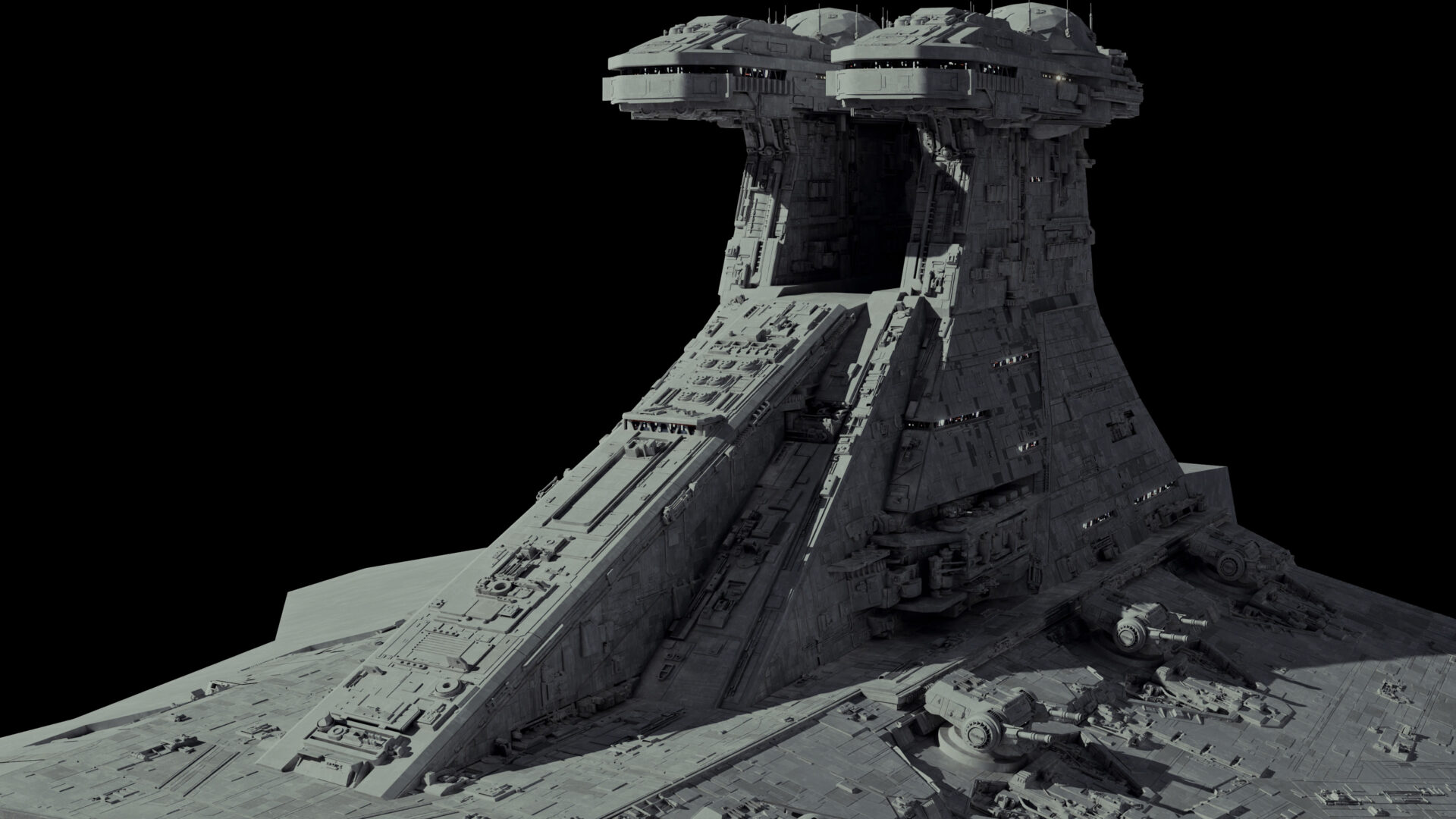 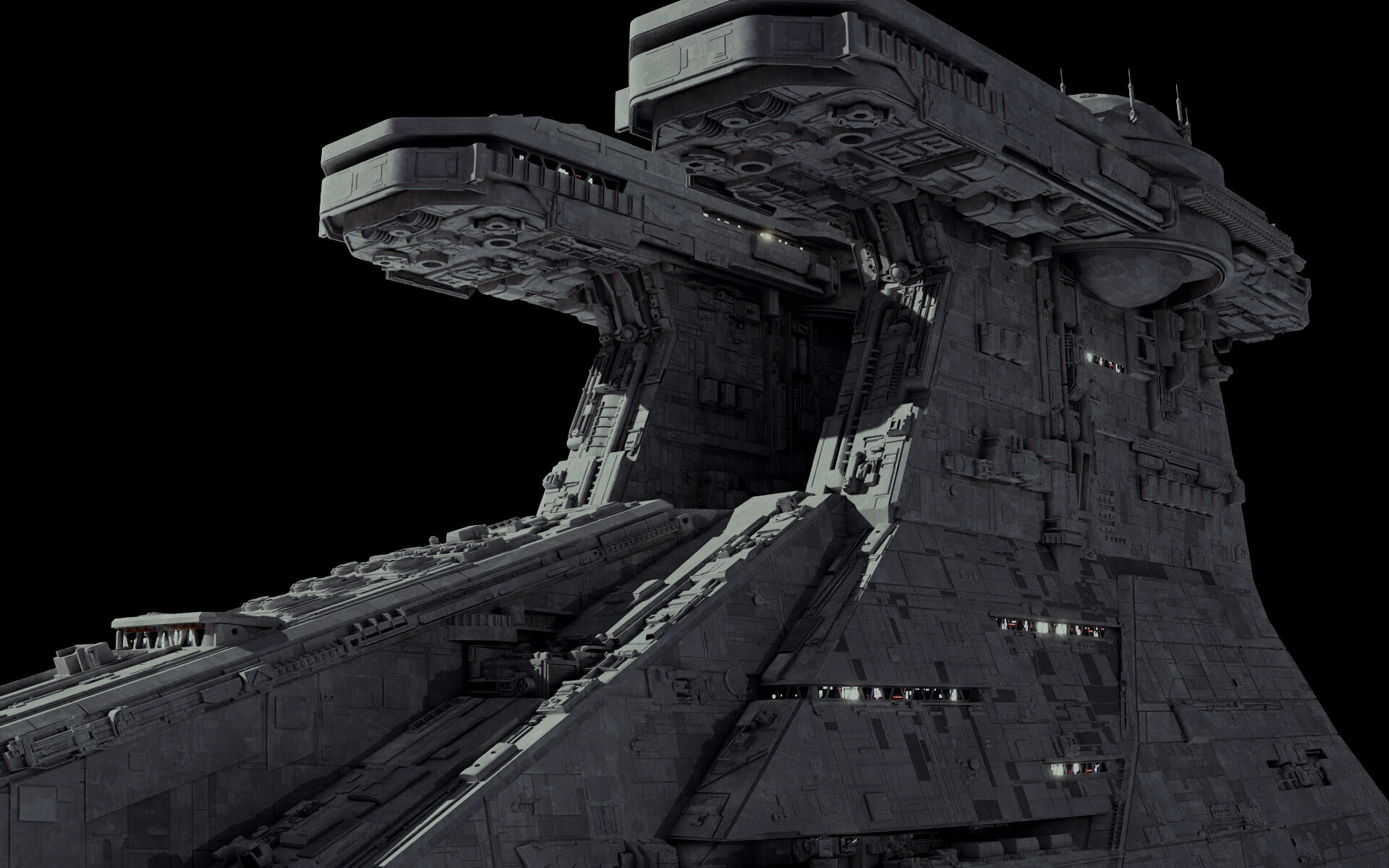 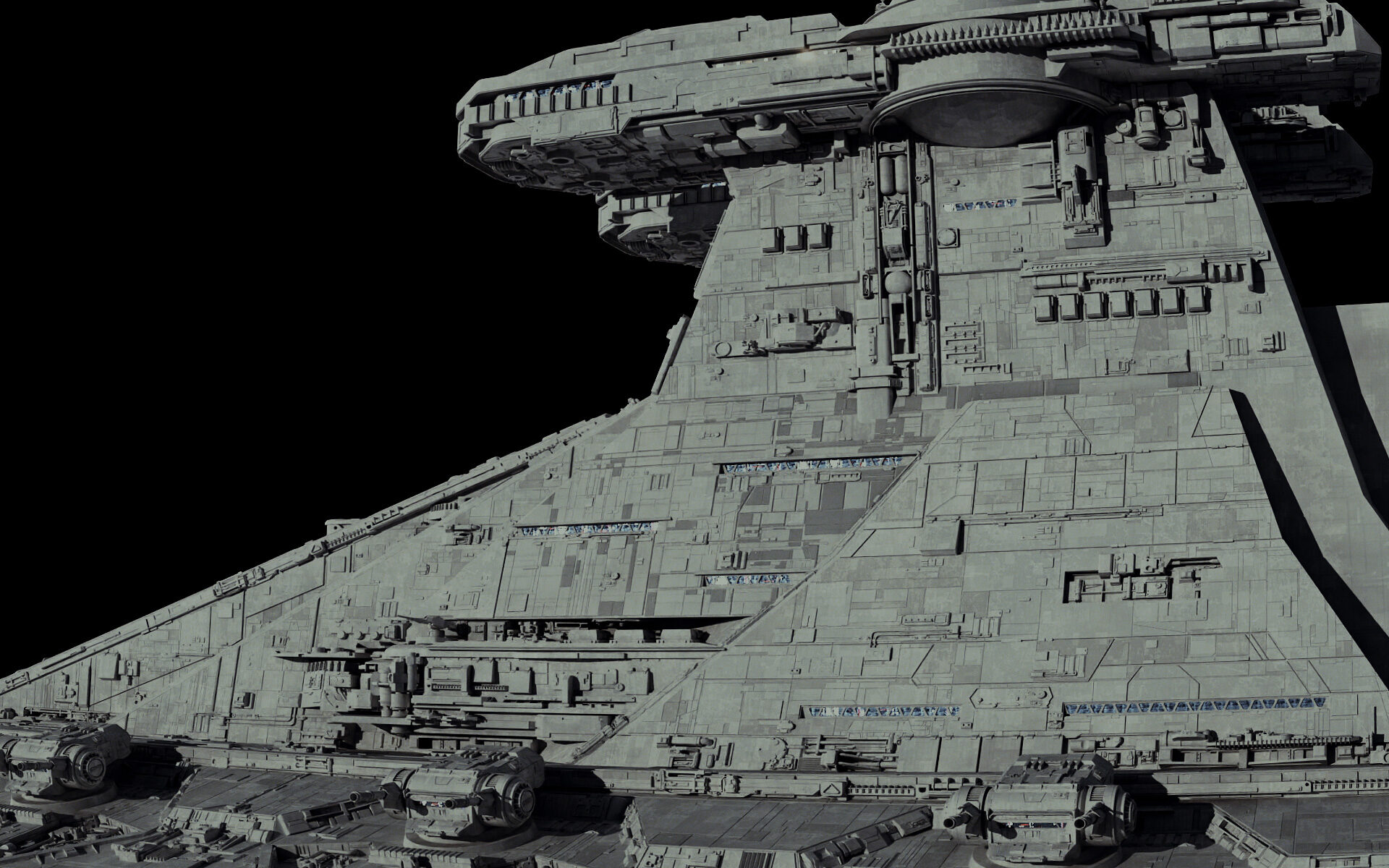 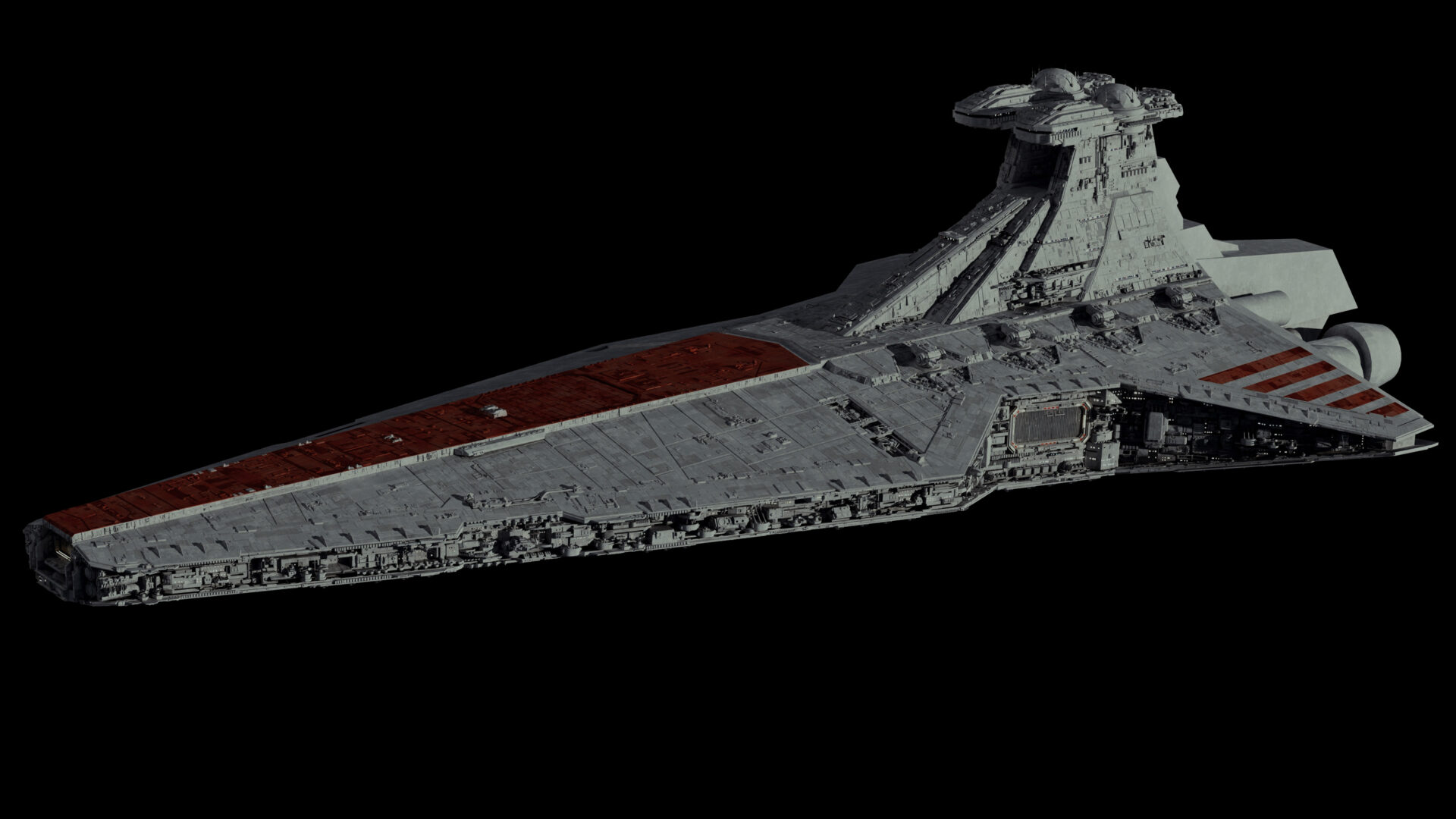 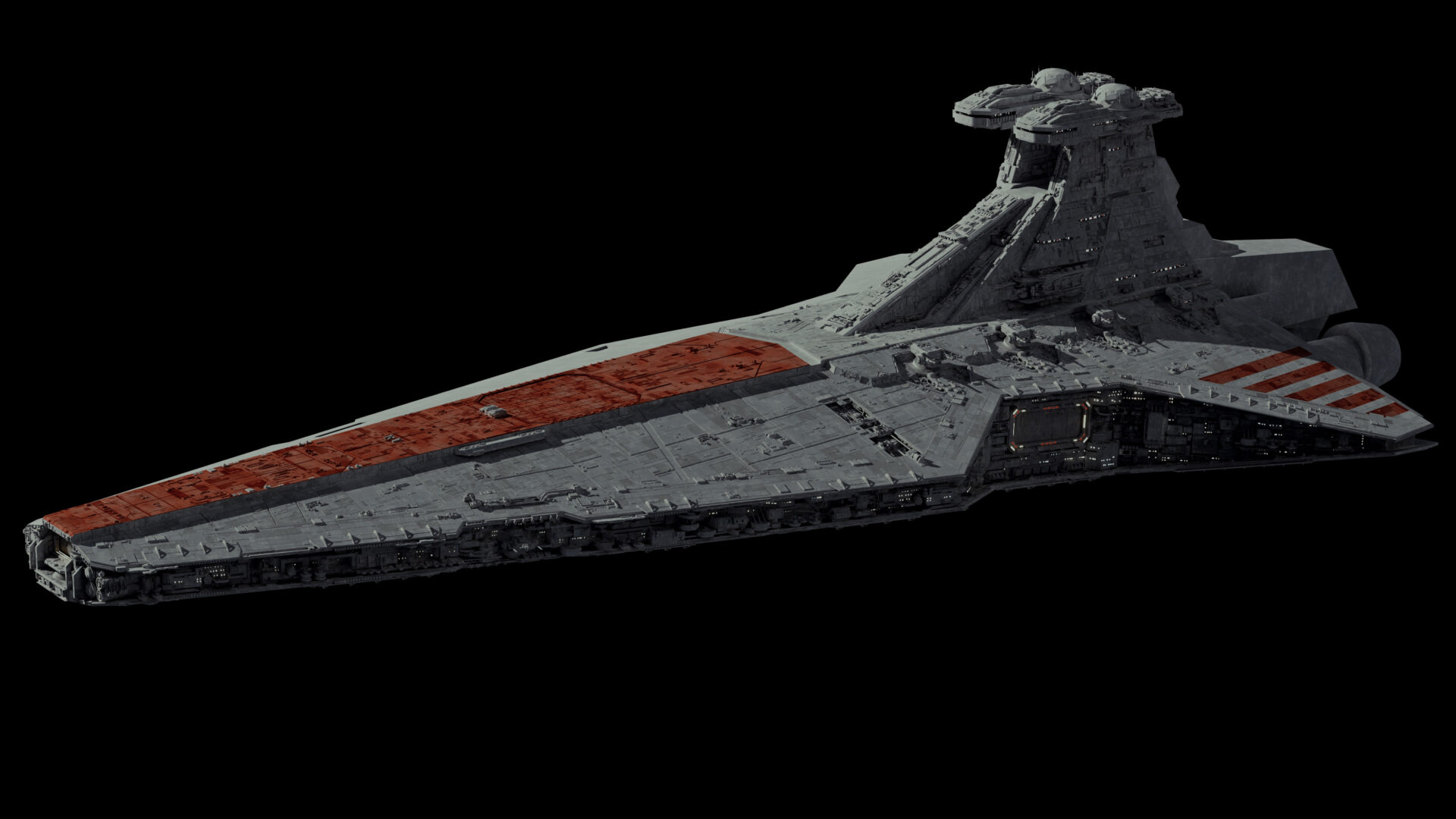 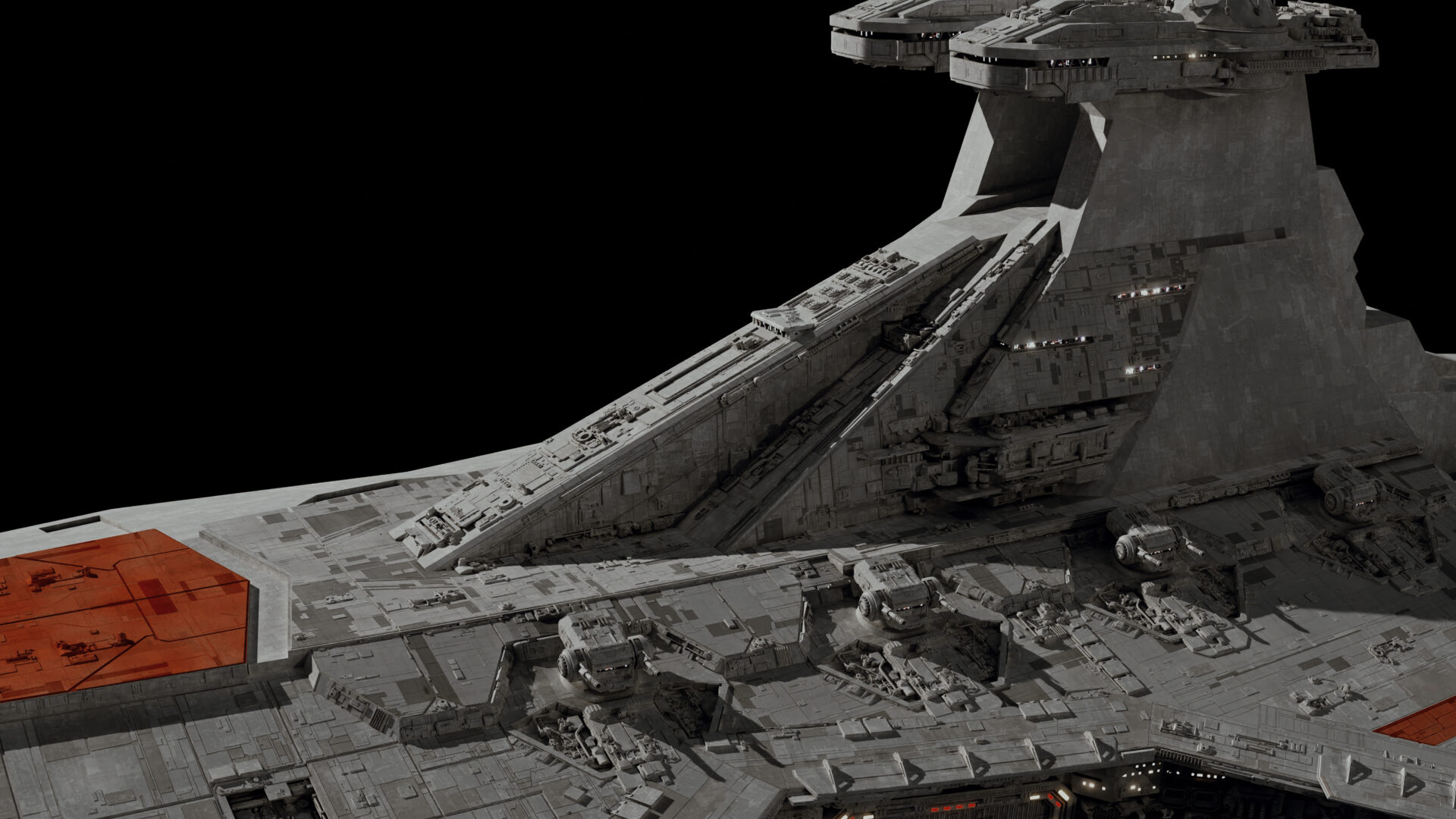 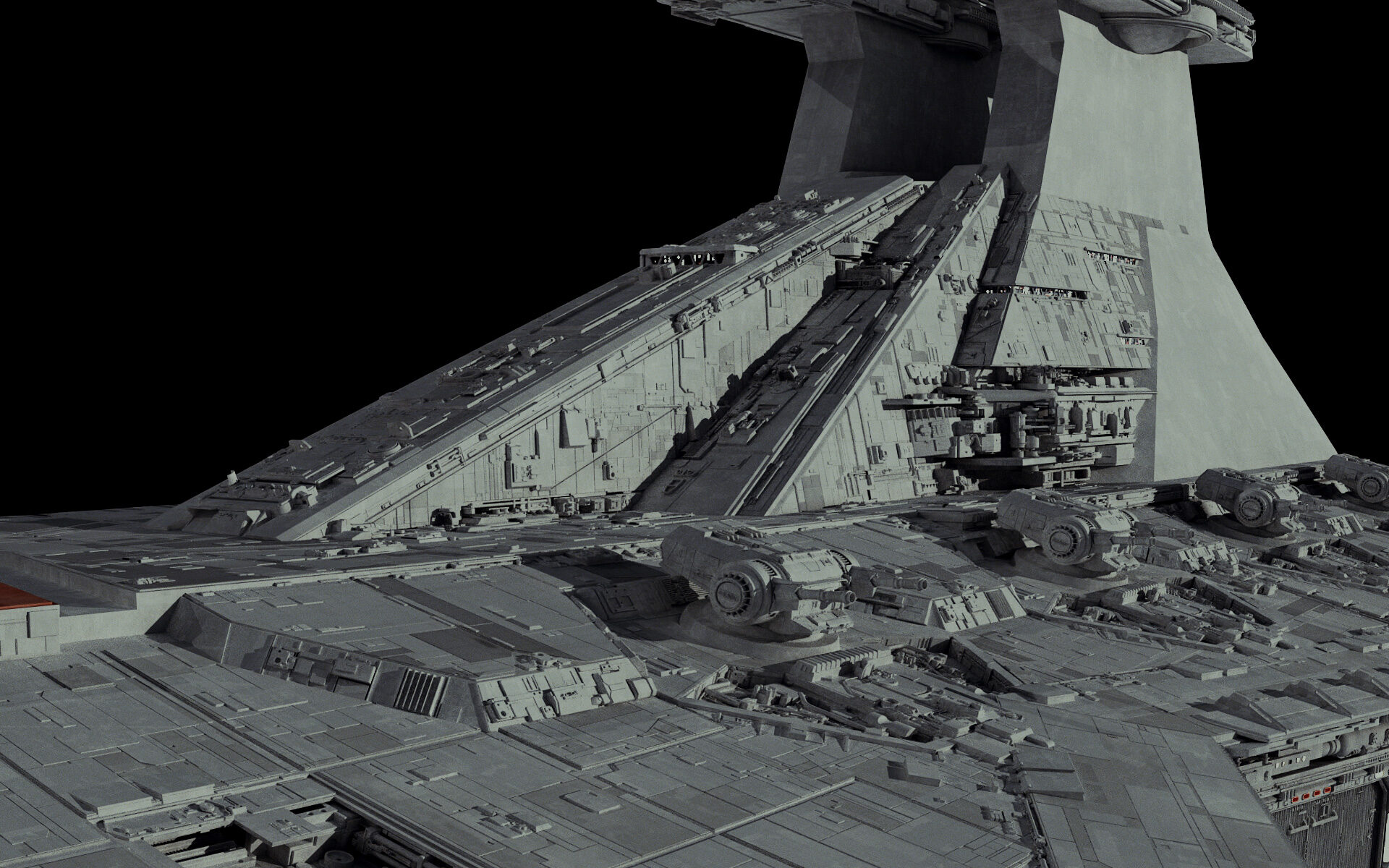 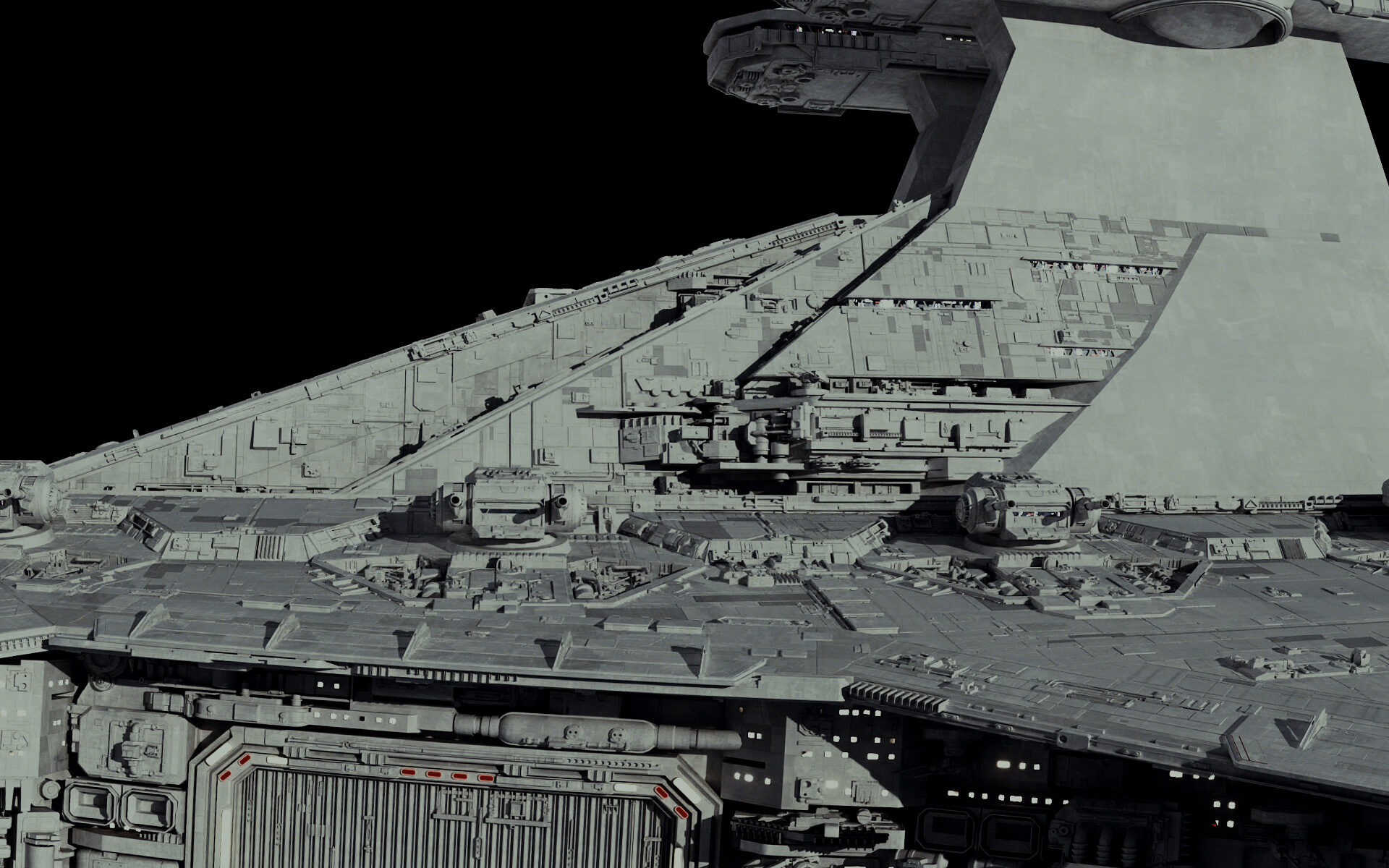 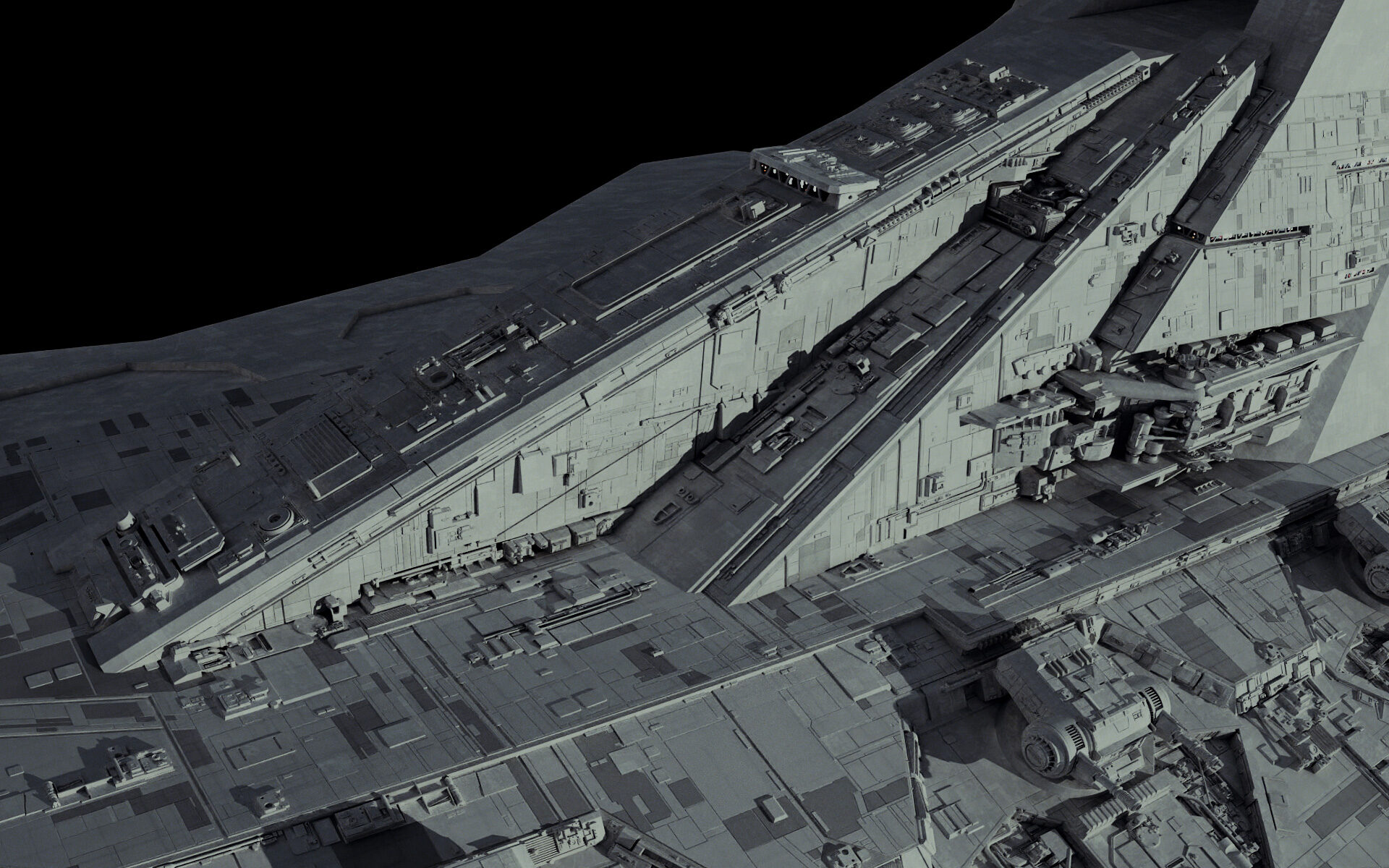 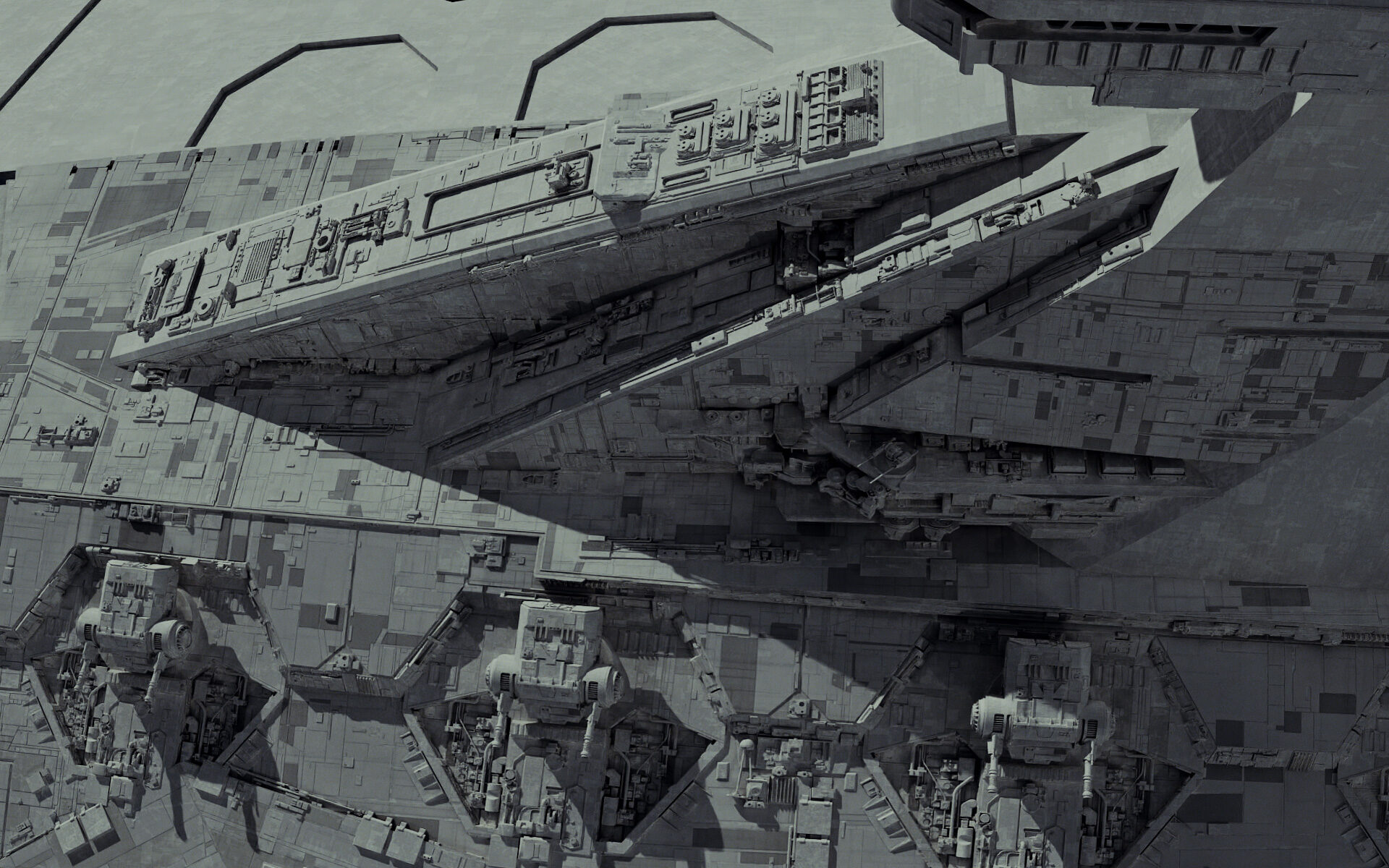 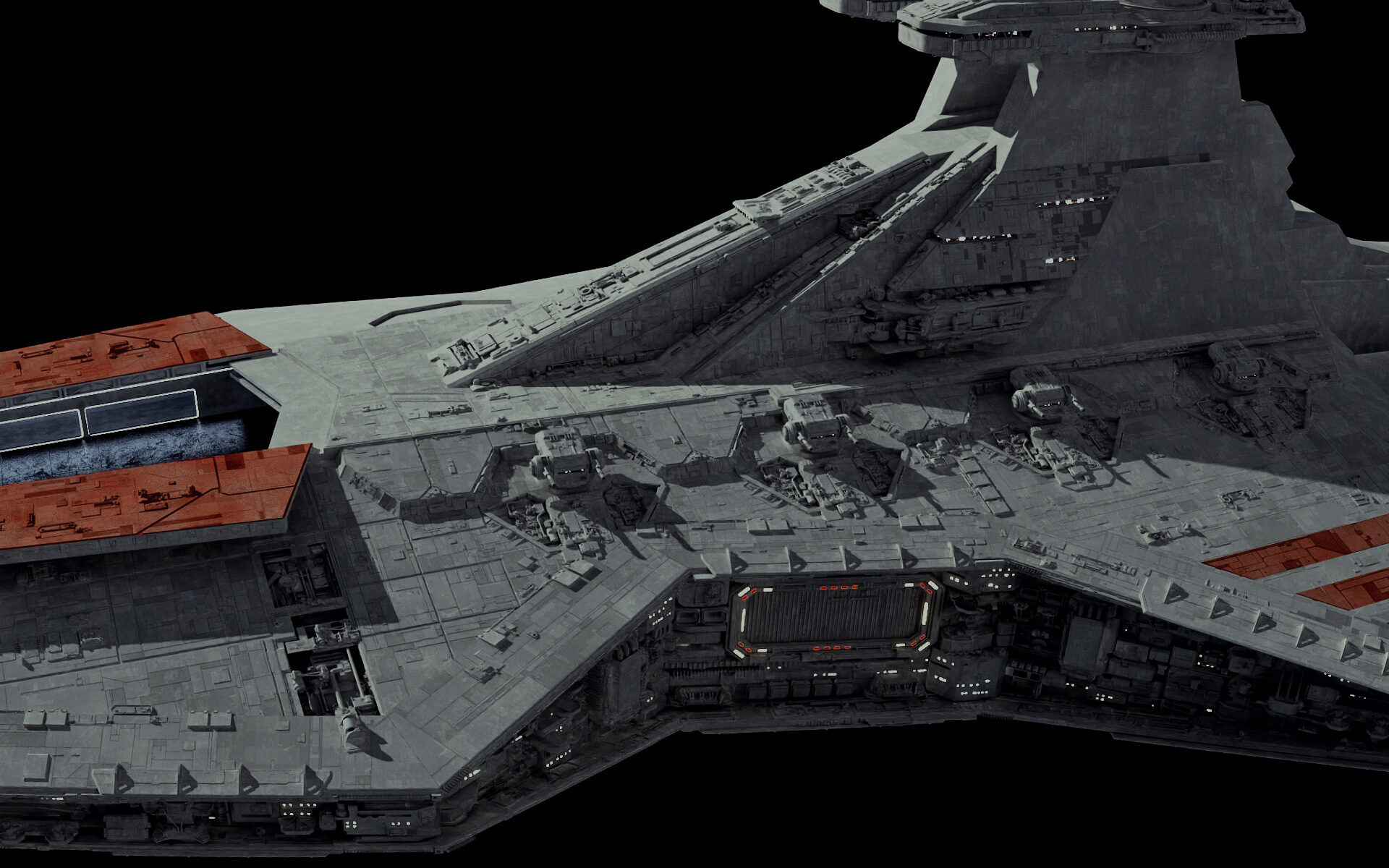 What a beautiful beast of a ship. I prefer this design over the official design. I love the shield-generator domes.

It makes me like the Venator even more than when I first saw it. 🤩👍 This would look awesome in Imperial dress… 👌😎

Oh, man stop… I can only get so many nerd boners. JK. That would be amazing to see a Imperial Venator coated in their colors.

That photo is a cropping of your secutor model 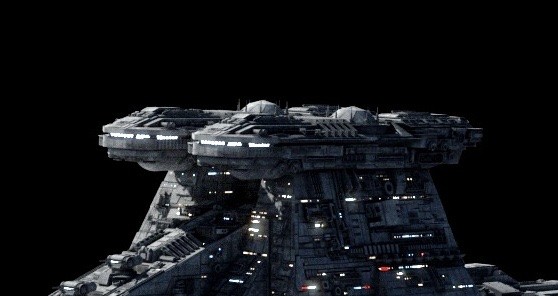 The venator bridge look very similar to the Secutor one.

They should since I believe they are interchangeable

no, Secutor bridge is much larger

Pls do some warhammer ships.

As much as I would like that, Fractal is a Star Wars guy.

I feel like this is more realistic than the ones used in the movies.

Oh man… This looks so good!

Makes me want to dig up and actually MAKE my “Imperialized Venator” concept!
Might as well talk it out a bit here, might actually get some feedback!

Suffice to say, the big obvious change would be the removal of the ‘dual bridge’ set-up, and its replacement with a new more Imperial looking single bridge module, I’m thinking the “Victory” style shape rather than the “Imperial” shape though.
Total hanger space would be reduced slightly and the huge (near) full-length doors would be sealed up permanently to significantly improve the armour, but the side, bottom, and smaller top doors would be retained.
I also see it being up-gunned somewhat with more advanced, energy-efficient, Imperial spec weapons. It would keep the four a side batteries, but would get at least two a side more on the underside of the hull (The new starfighter bridge would be in a now ‘sticking down’ protrusion just aft of the bottom hanger opening, and the new guns would be either side of this structure to ‘protect’ it). But most significantly, at the rear end of what used to be the ‘full length’ hanger door, just forrad of where the superstructure starts to rise up, there would be a single ‘super-heavy’ turret. Mounted on the centerline, it could easily fire either forward or to either side. I see this turret being a slightly simpler ‘prototype’ of the Octuple barbettes of the ISD2, maybe a 6-barrel rather than 8-barrel version or something like that, with a dedicated ‘secondary generator’ (from a corvette or small frigate), just for it.

Anyway, thats the “concept” for the design at least…

I personally see no point in doing that because if your gonna get rid of it’s main advantage, cut off one of it’s bridges and replace it’s main guns or add more rather then doing that and turning it into a full warship you miles well just use a victory, a tector or a imperator. Which already fill the roles you’d put the Venator into.

Especially when the Venator was already pretty amped up when it comes to weaponry.

It’s got the following

1 Heavy Artillery Grade Composite Beam Cannon which Disney changed from being a vehicle to being an actual dedicated weapon hooked up the ships reactor and it’s one the venator has to sacrifice it’s ventral hanger to have.

Combine all that fire power with the 420 fighters, bombers and interceptors it has and you have more then enough firepower.

Plus the Tector, Victory and Imperator exist which negates any reasons to use your suggestions since they already fill in the roles that your venator would and they do it better.

The tector basically is already what your venator would be with a complete lack of a hanger in exchange for heavy armor and it has very powerful main guns and a slew of turbolasers as well as a sunken bridge.

I go into more detail in my reply to Eugene – But one specific thing I wanted to point out here – The ‘startfighter control’ bridge wouldn’t actually be eliminated alotogether. I did make a point to specify that it was *moved* to the Ventral hull, just aft of the lower hanger opening.

I still agree with Eugene.

And honestly if you really wanted to make the venator more combat oriented then all you’d have to do is swap out it’s 52 point defense cannons for turbolasers giving it 52 turbolaser cannons.

On top of that you could put more DBY-827s on the ventral hull lining the ventral hanger something we see with some venators in the clone wars tv show.

Those changes would be a lot simpler and all you’d have to sacrifice would be point defense weapons and wouldn’t have to make drastic changes to the design.

Fighters and ground equipment, yes. Firepower, absolutely not.
A single ISD is larger than all of those ships combined.

However, while that combination may be equal or slightly cheaper to produce, you are not accounting for the crew complement and fuel requirements as well as limited dockyard space and a whole host of other logistical issues that come from taking the role of a single imperator and splitting it into 3 separate ships. what 5 million you save in initial production will quickly be eaten up. I know we all harp on the imperial fleet for not being diverse enough but the ISD is adequate in its multirole duties even if it isn’t spectacular everywhere.

If you already accepted loss of all forward bay carrying capacity, why not move guns there? One battery on dorsal and one on ventral surface for an all round arc of fire (maybe with all baing able to fire forward but I dont know if the hull angle allows) to acquire possibly the single best main battery arc in the fleet.

The thing is however, if its a new construction the biggest issue with this design is that you want Procursator. If a rebuild I dont see it being worth the hustle.

And may I ask the purpose in the fleet you see for it, if operating as designed?

While I did specify a “reduction” in fighter capacity, I didn’t mean to imply complete removal of the hanger facilities. I still see my variant having a capacity of maybe 80% of the ‘standard’ Venator, so easily 350+ Depending on the size of the craft in the given loadout – Using purely Imperial craft, I’d asume a compliment of AT LEAST 12 squadrons of basic TIEs (single-hulled varients) 3-4 squadrons of Bombers (or other large TIE variants), and at least 1 full squadron of Assault Gunboats. Even with just that, you already have 204 total, nearly THREE TIMES that of an ISD2 (standard TIE compliment of which was 72, including bombers).

End result, with my varient, you get three times the fighters (if not more) of an ISD, with combat ability greater than its predecesor, and equal (if not greater) than a Victory Class, along with similar defensive capacity. Thats a ship *I* at least would take over an ISD (1 *or* 2) any day.

But that is, in the end, a ‘personal opinion’ statement – to be fair.

Oh, my bad, I misread your variant as relying entirely on the ventral and side hangars.
To a degree the point stands though, all of Venator’s hangars are interconected (I dont remember for sure but almost convinced thats the case. Its up to You to discard this part). Placing the sextuple turret in the root of the hangar is exactly where it connects to the rest of them.

And I apologise if the following comes across as rude,but you do not get direct combat capabilities on par with the Victory because a lot of VSD’s threat comes from its rocketry. The way I see it, the increase is not that great (not insignificant, certainly interesting, but not something to base the doctrinal approach on) adding 6×40 tt to 8x2x70 already in place (actually less since you put two additional 2×70 turrets).

If comparing with ISD, yes, you do get a bigger fighter complement over an ISD lugging around legion-worth of shuttles, barges, etc in the hangar, at a price of being roflstomped with turbolasers directly in a less time than fighters make themselvesf useful. It comes down to one’s perception of smallcraft power and importance in SW combat, but by my reckoning it is essentially marginal – just too dangerous to be ignored but of limited concern in the grand scheme of things.

Not that I think its a total dead end, I just think it sacrifices potential to outvenator the Venator while remaing in it’s original spot in the line. More is possible by ditching more fighters. On the far end, you can get an inverse Procursator (yes its in reverse to my original assessment), explicitly designed to engage in battles with forces of smaller tonnage/firepower which Navy could reasonably expect for most of the Rebellion era at a cheaper price than an ISD.

Well, or so I think.

I wish there were STLs of Fractals ships. I would love to 3D print some of these ships! I would pay good money for the files too!

what a beauty. hope the Acclamator gets a model as well and a lot of ships that show up in the prequels

Whis balcony on the forward face of the superstructure is for handling stuff like approach, landing/take-off, I imagine?

Secondary facilities of control is all good and well but off the top of my head, I dont remember instances were damage to ships was intentionally localised barring essentialy knife fight distances. There’s Tantive on a distance of only a few ISD hulls from the Devastator. There’s broadside exchange between Venator and the Invisible Hand (and that was probably accidental). Theres Executor over Endor but I’d honestly discout that battle entirely due to how specific the tactics were. And there’s a Nebulon over Scarif split in half, but thats not a high bar to set. Though I probably missed a lot, I not that sure that you can achieve accuracy past “in the probable sector/silhouette” level on the ranges SW dhould be capable of achieving, Well maybe better than that but something to that effect.