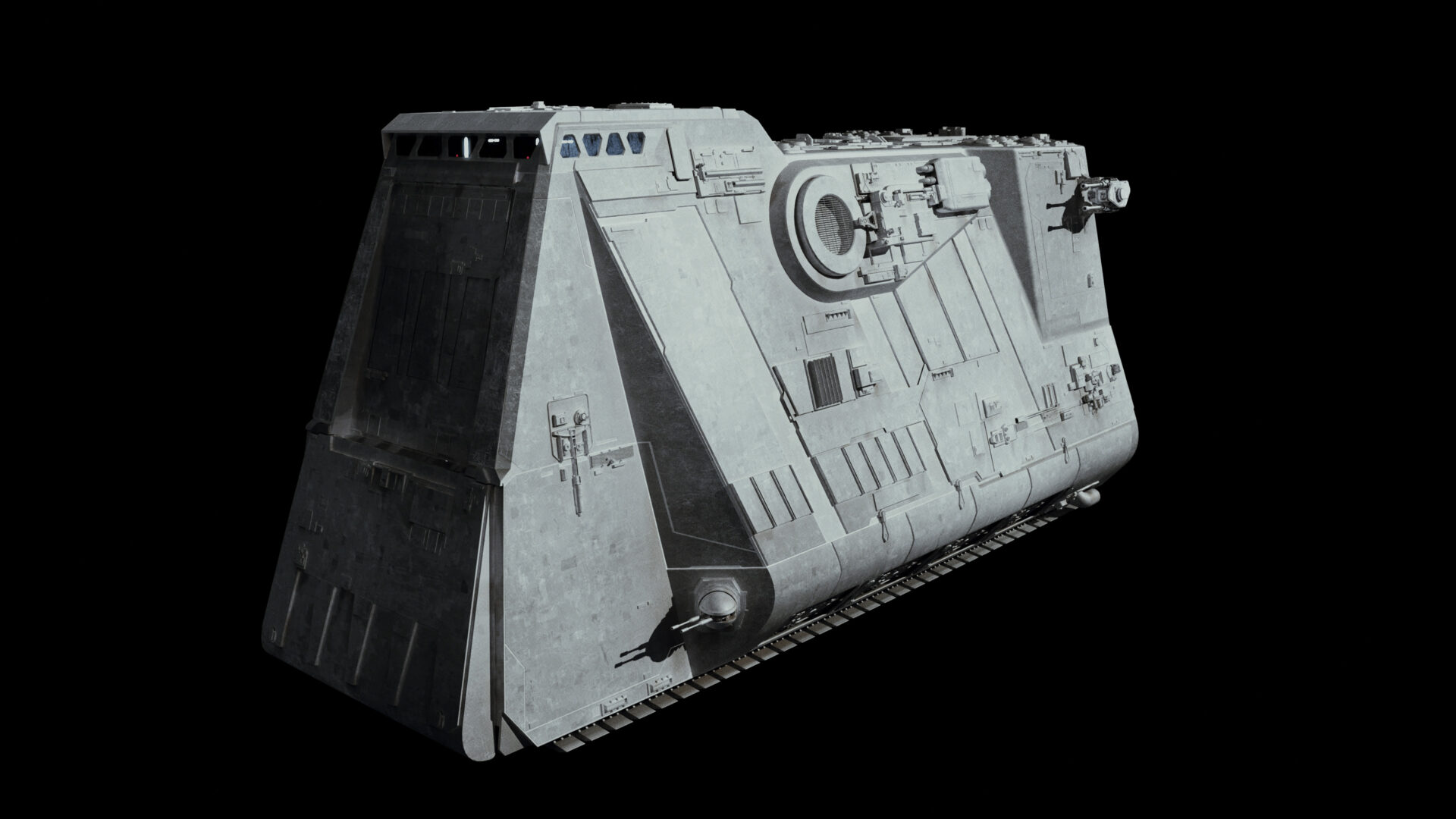 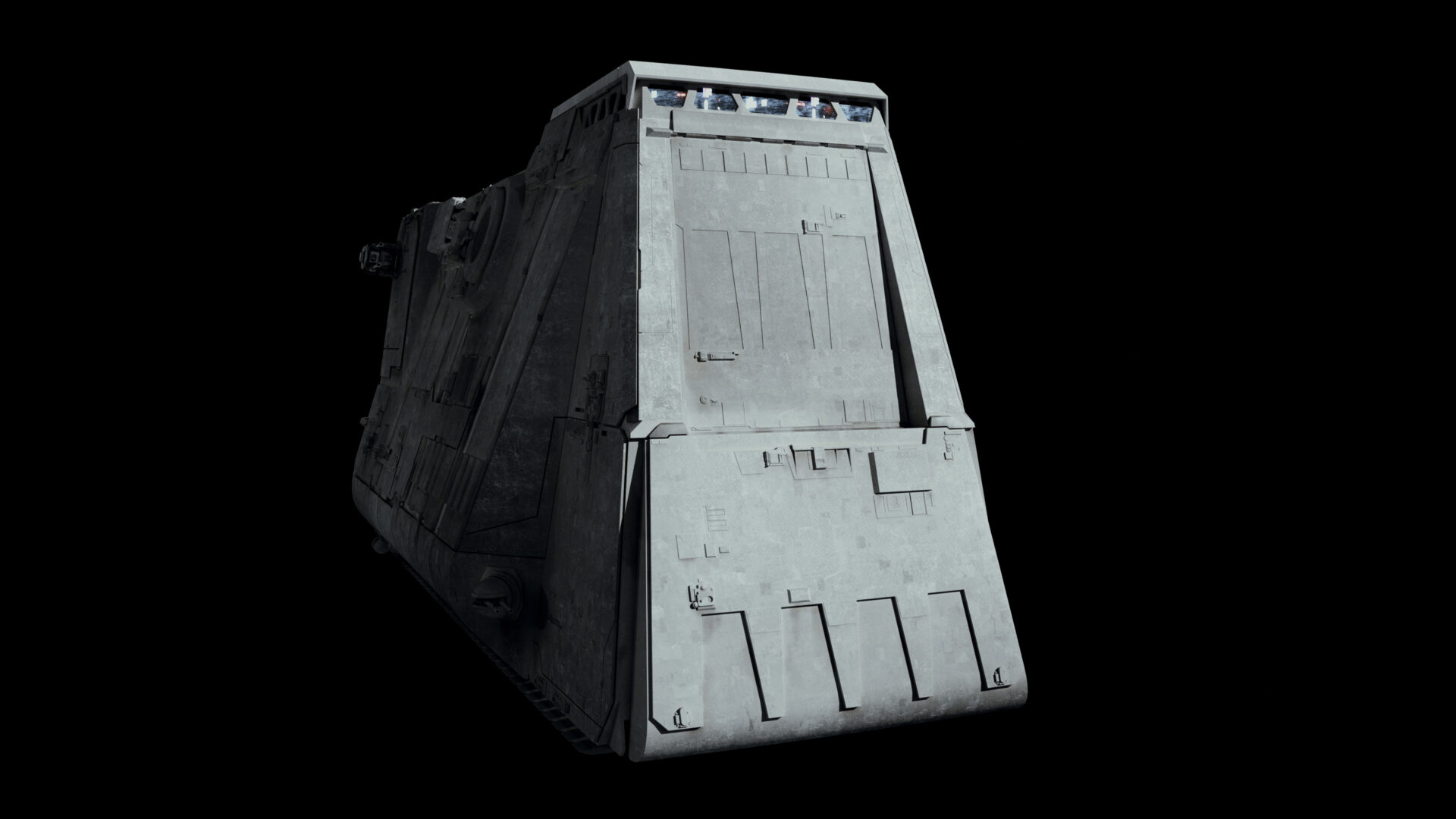 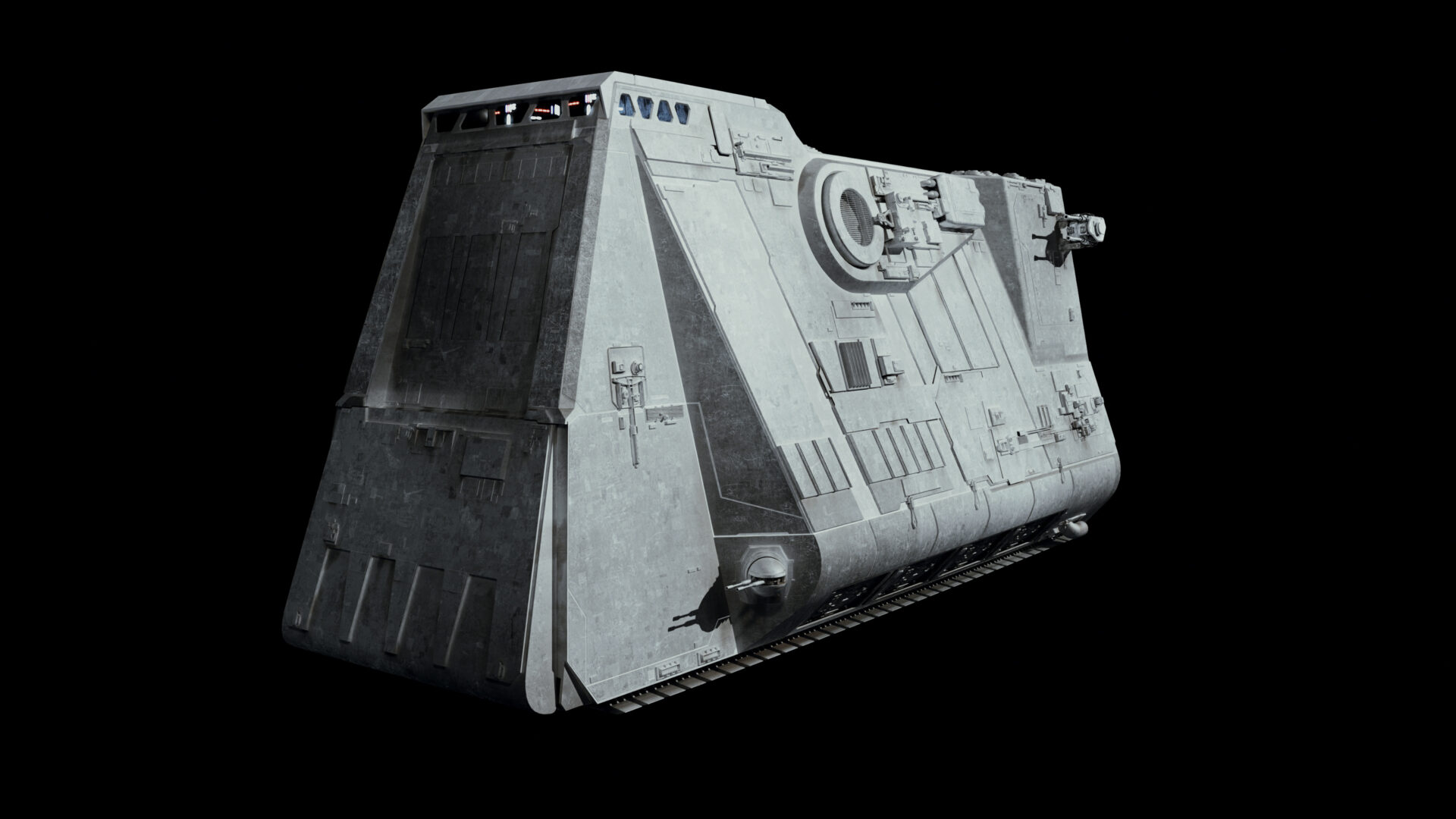 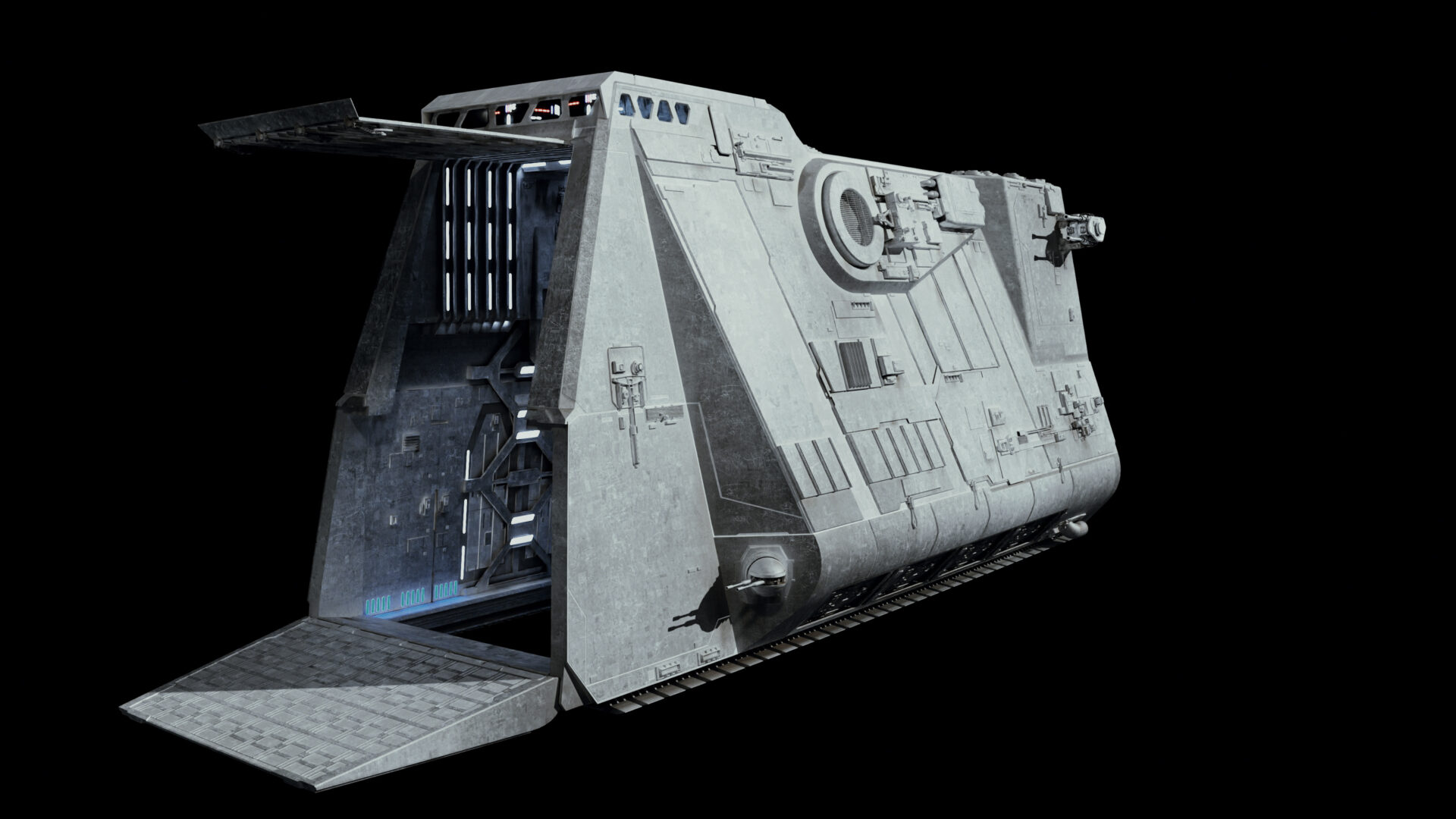 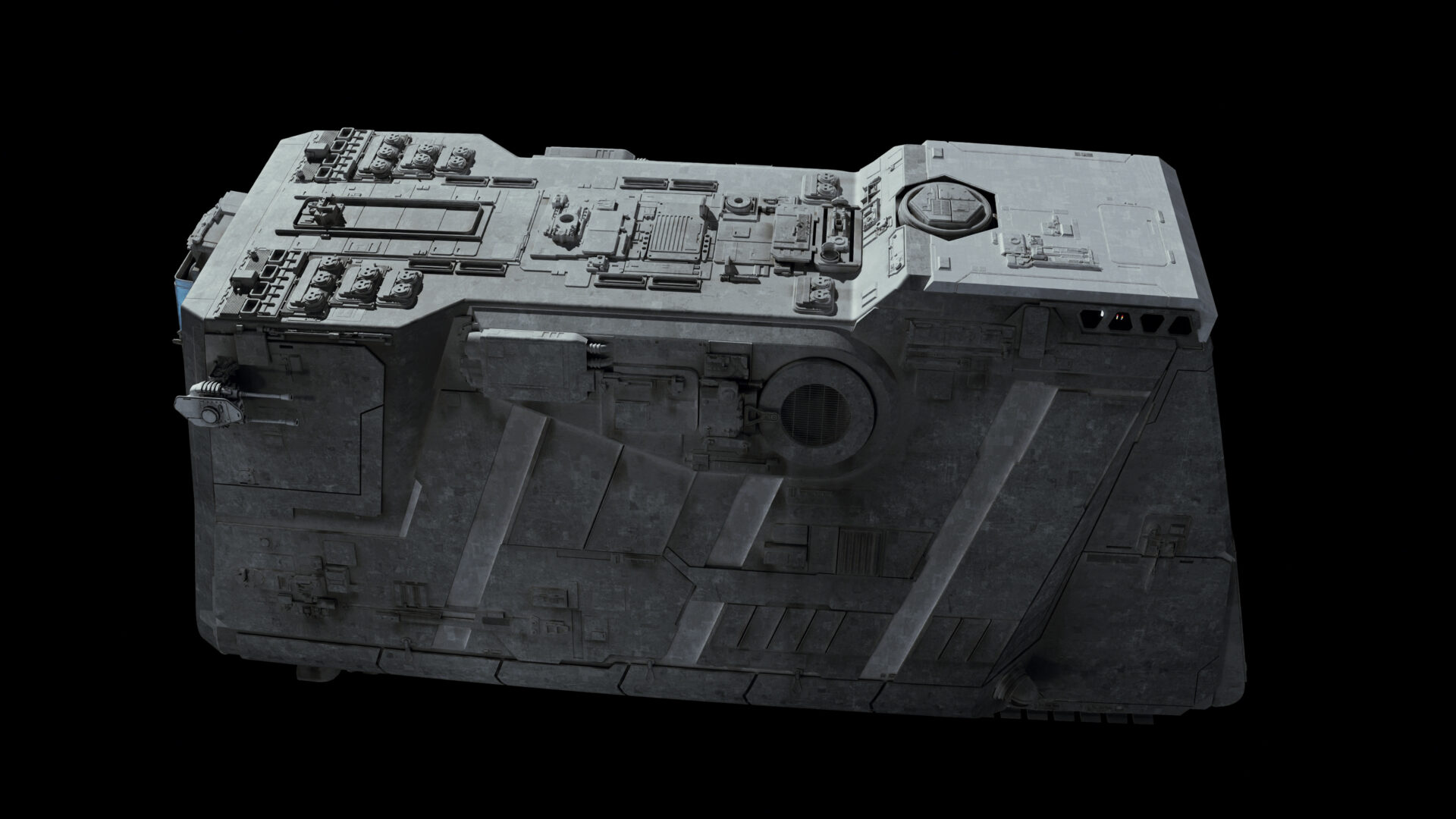 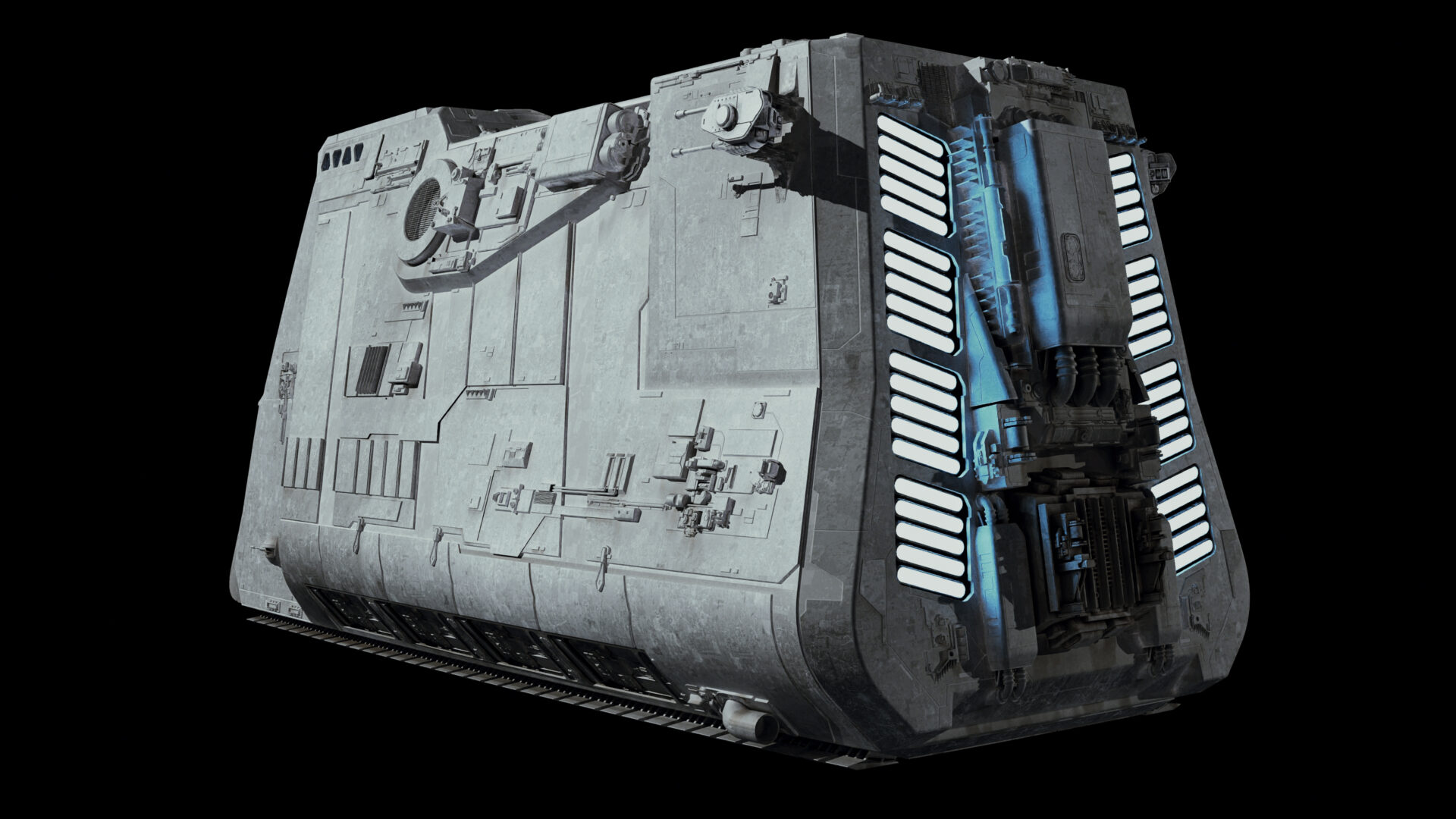 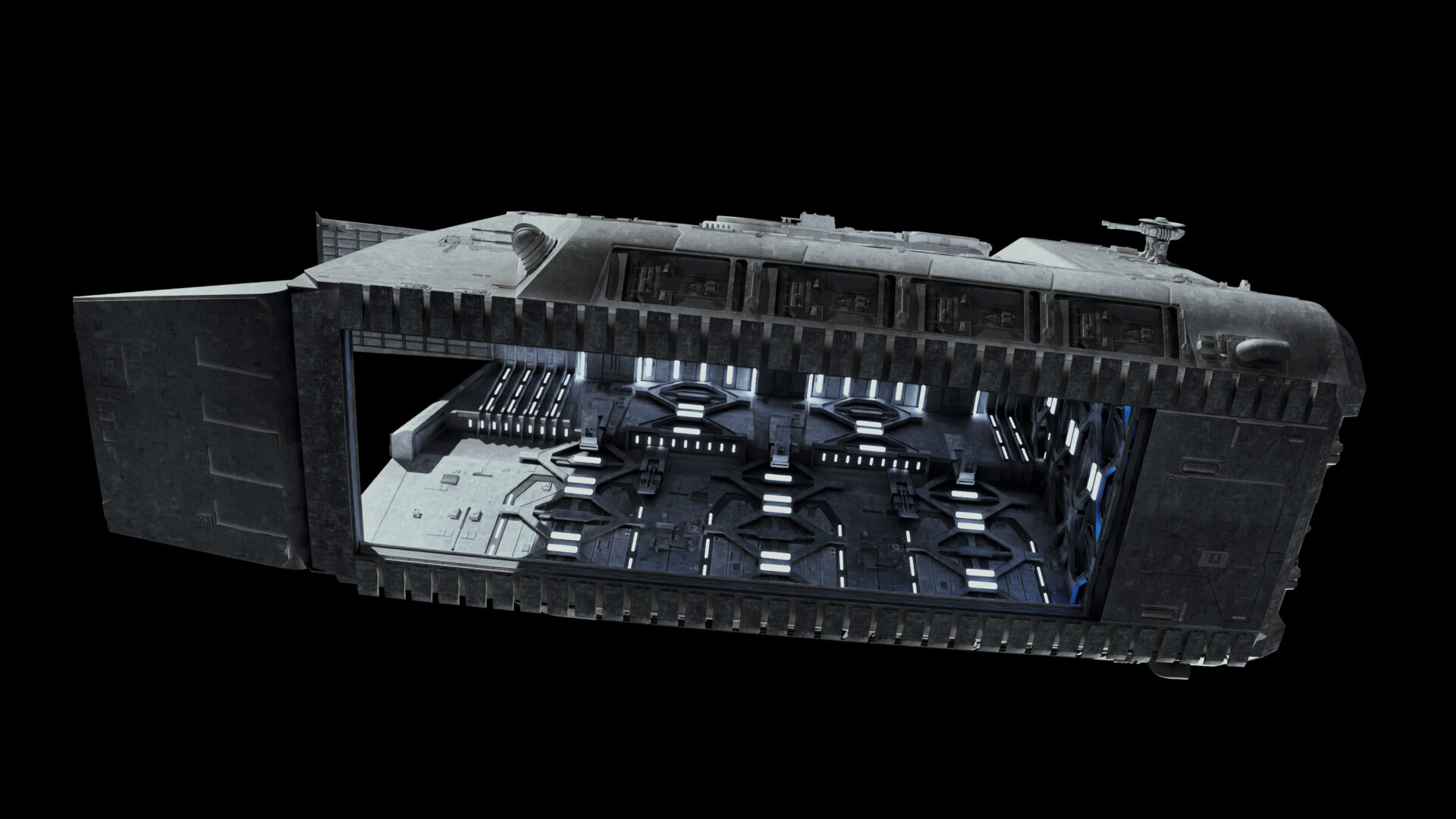 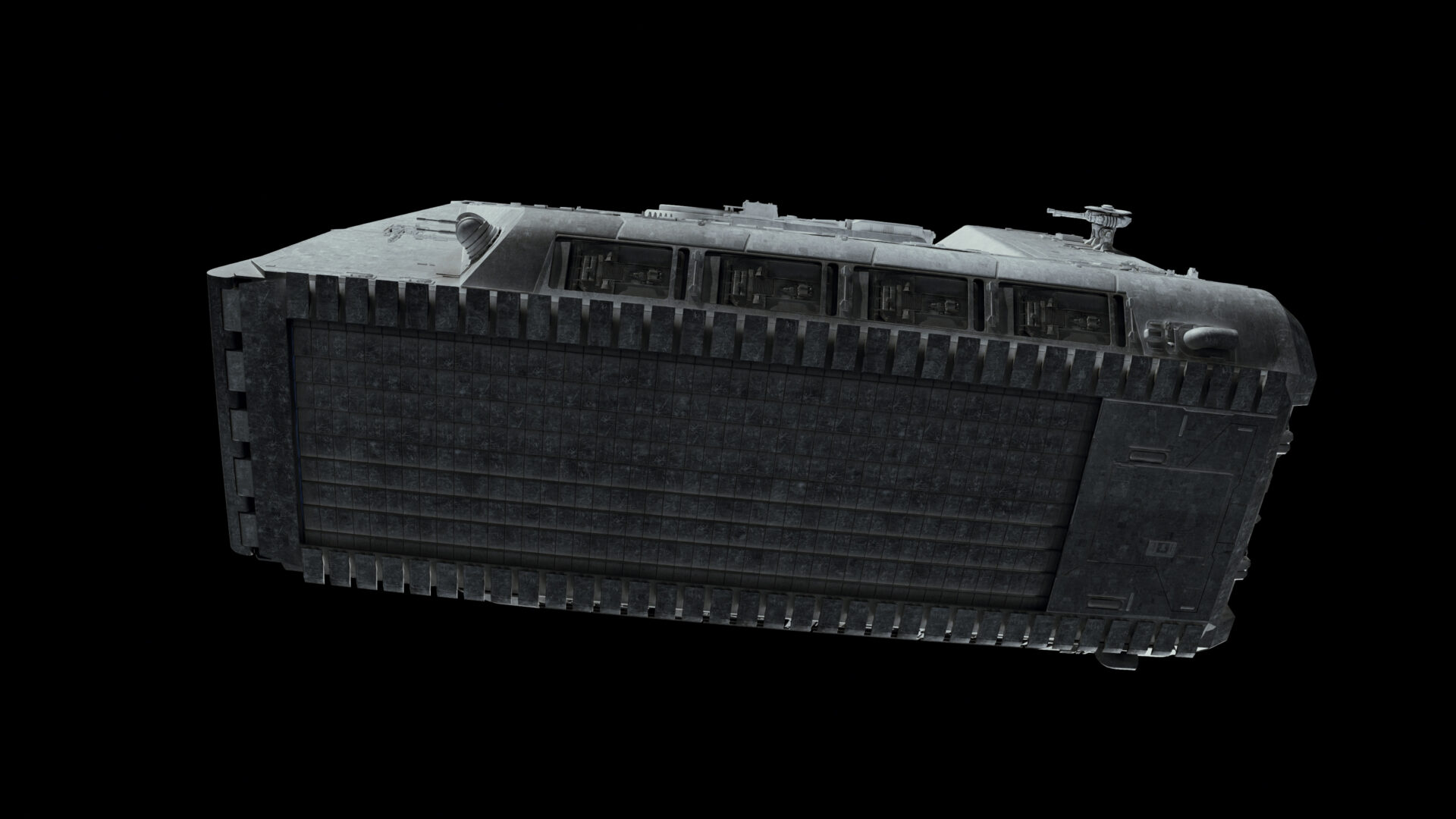 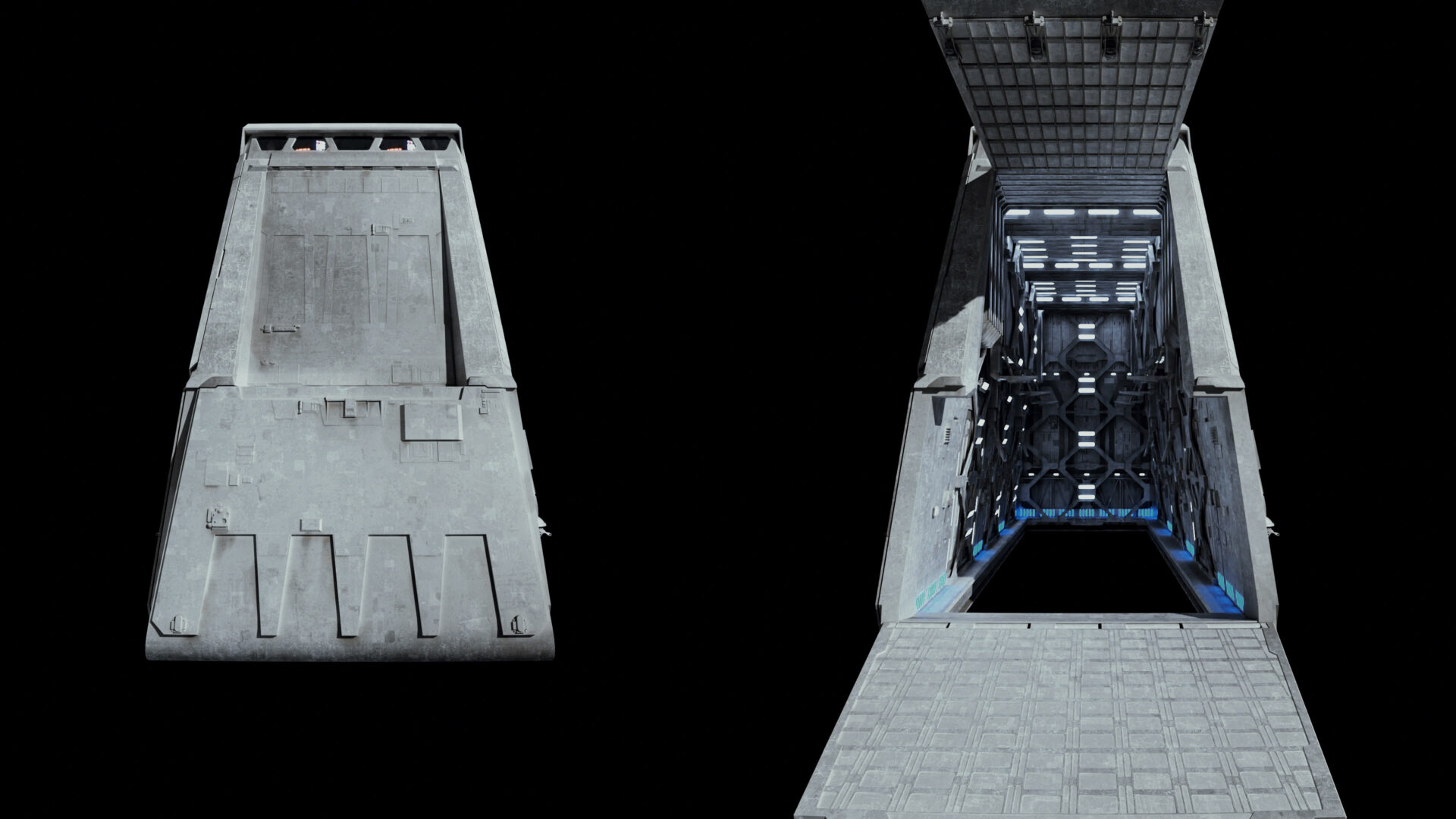 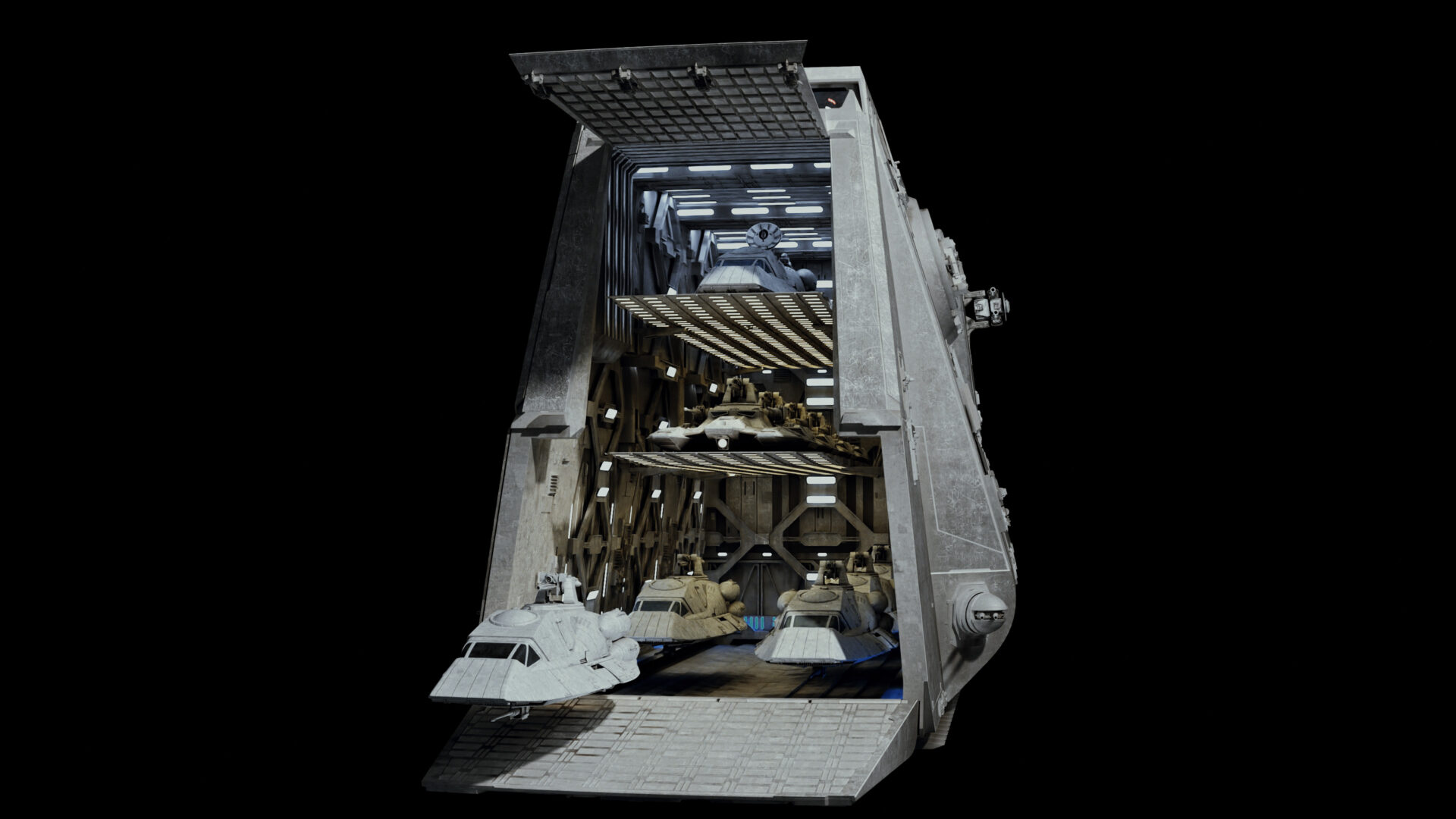 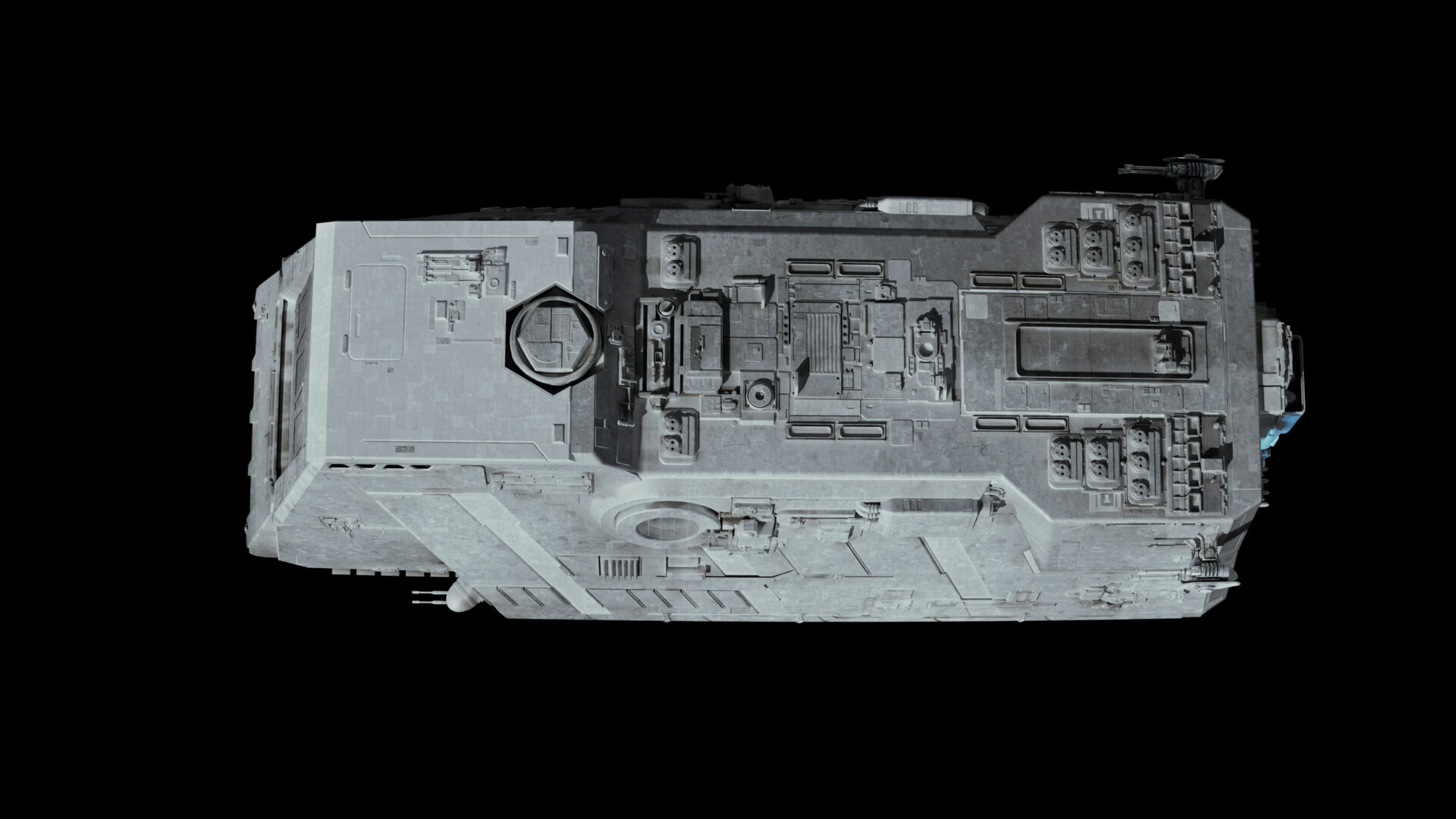 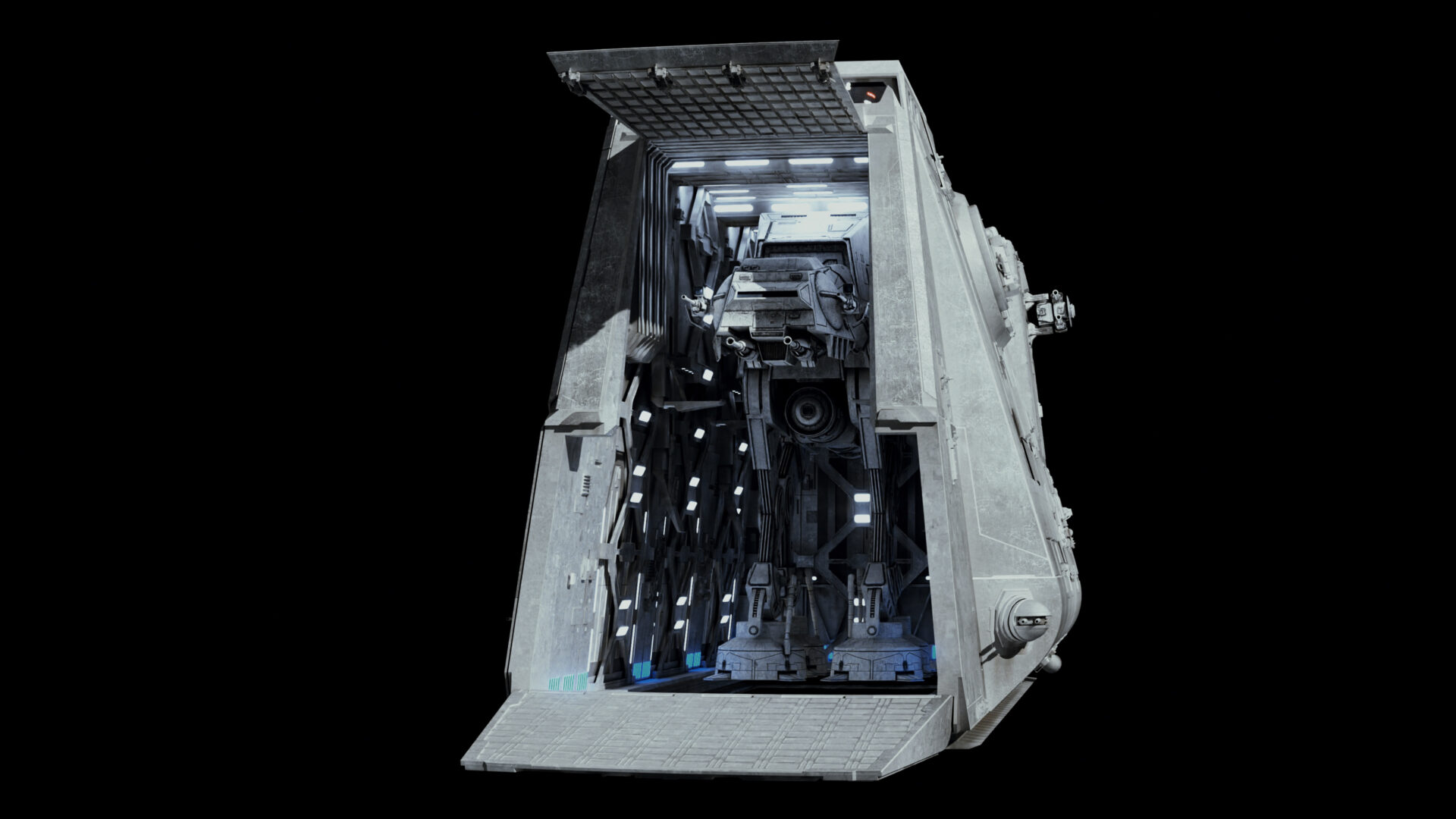 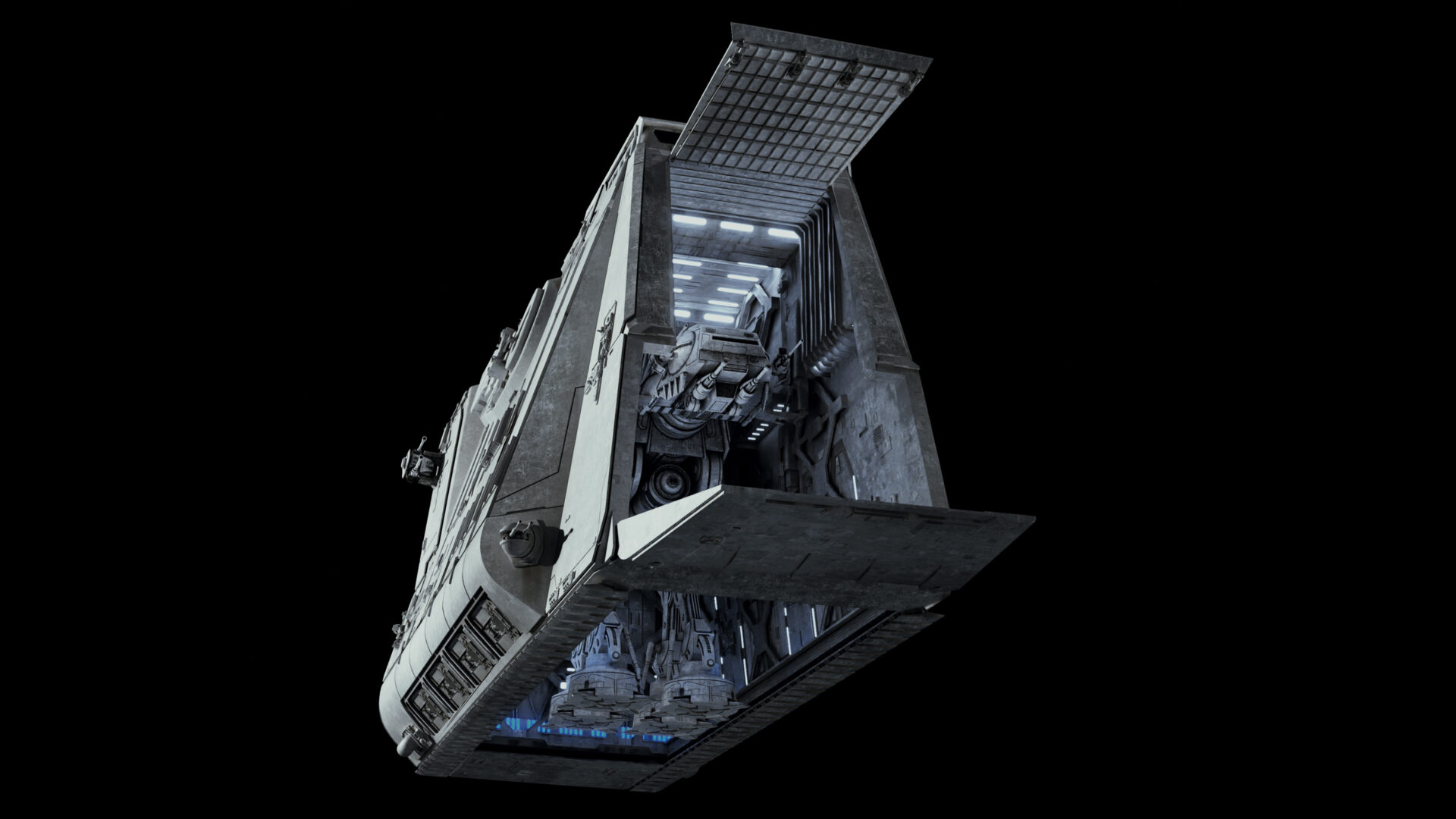 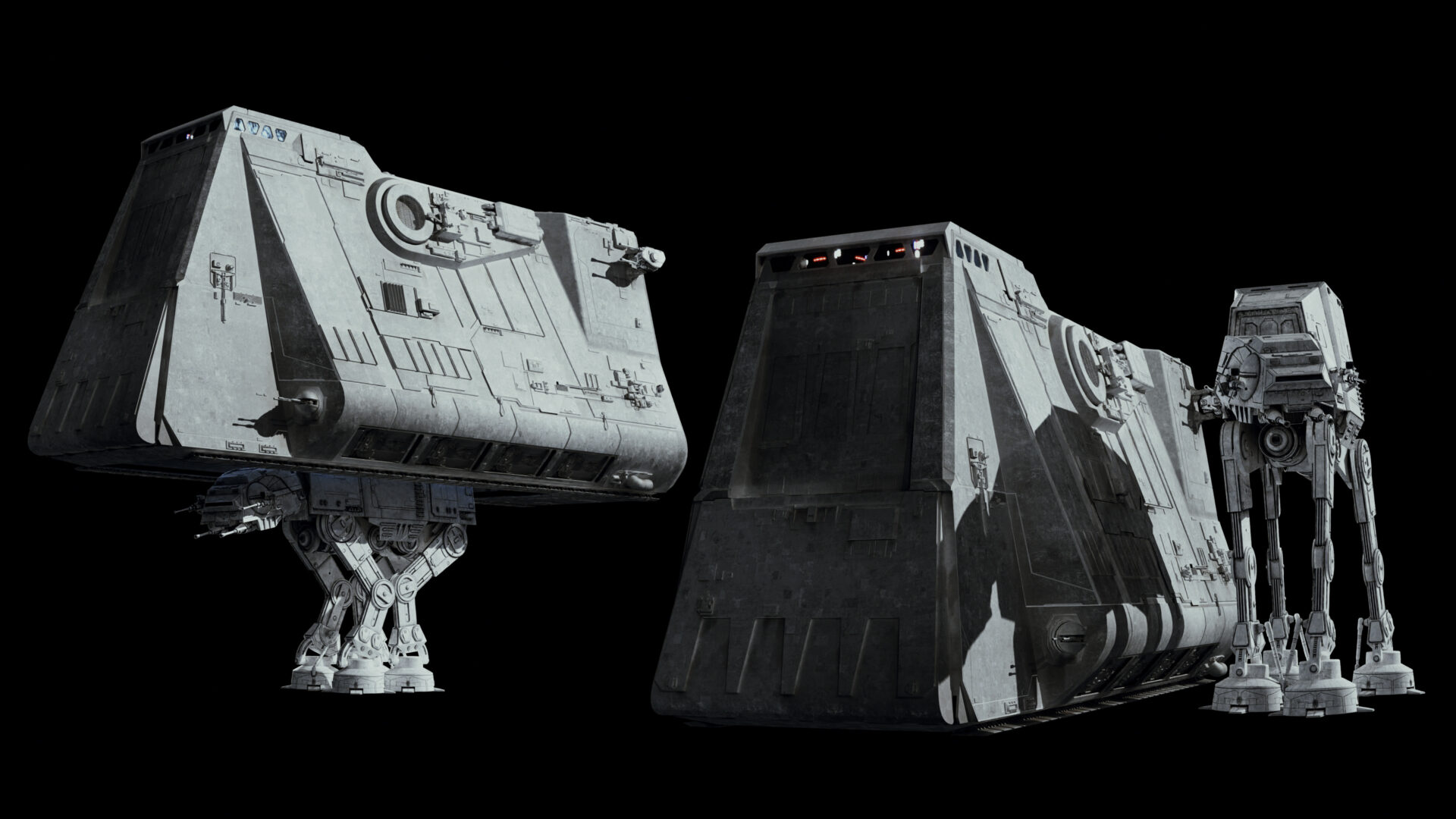 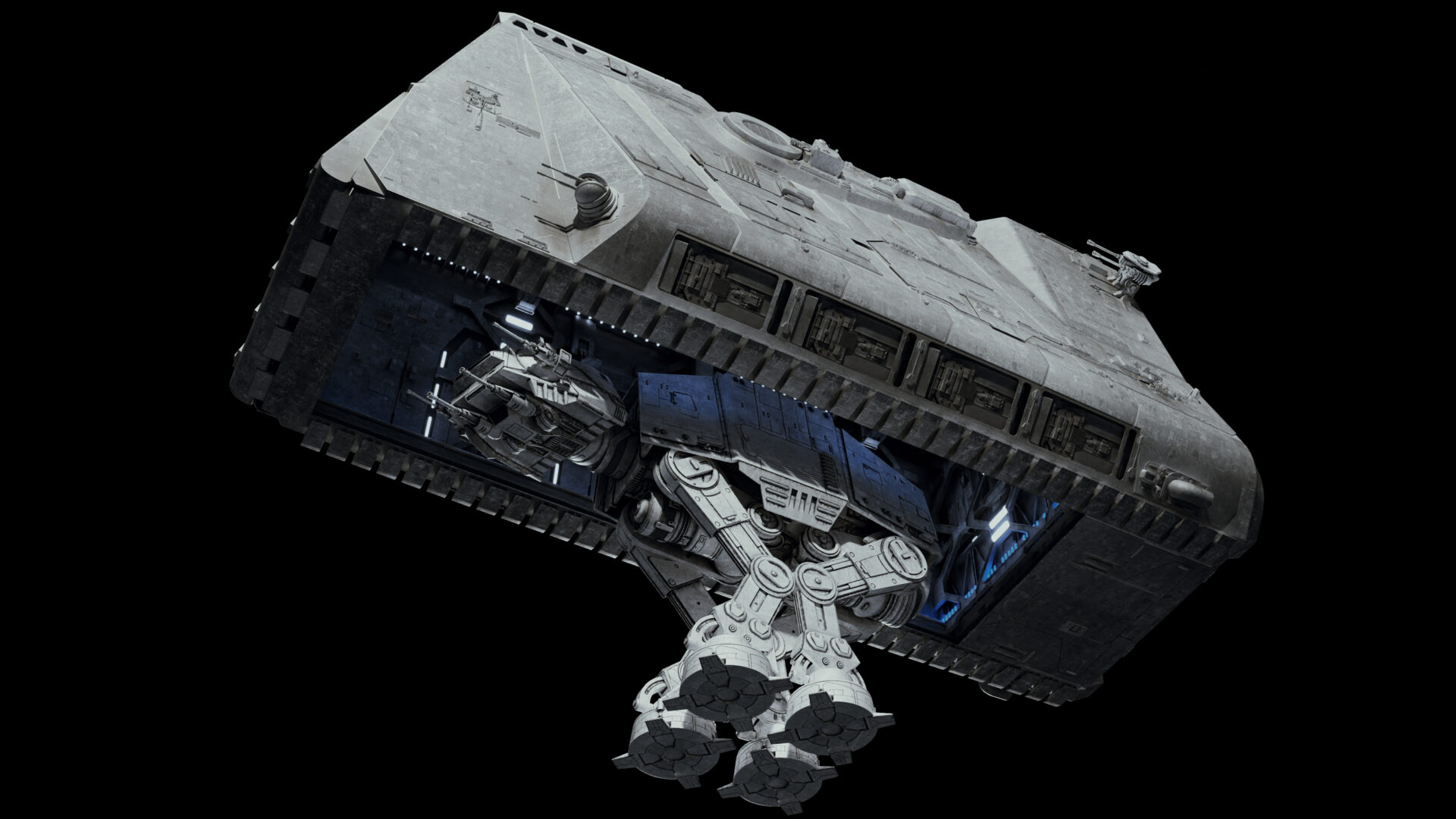 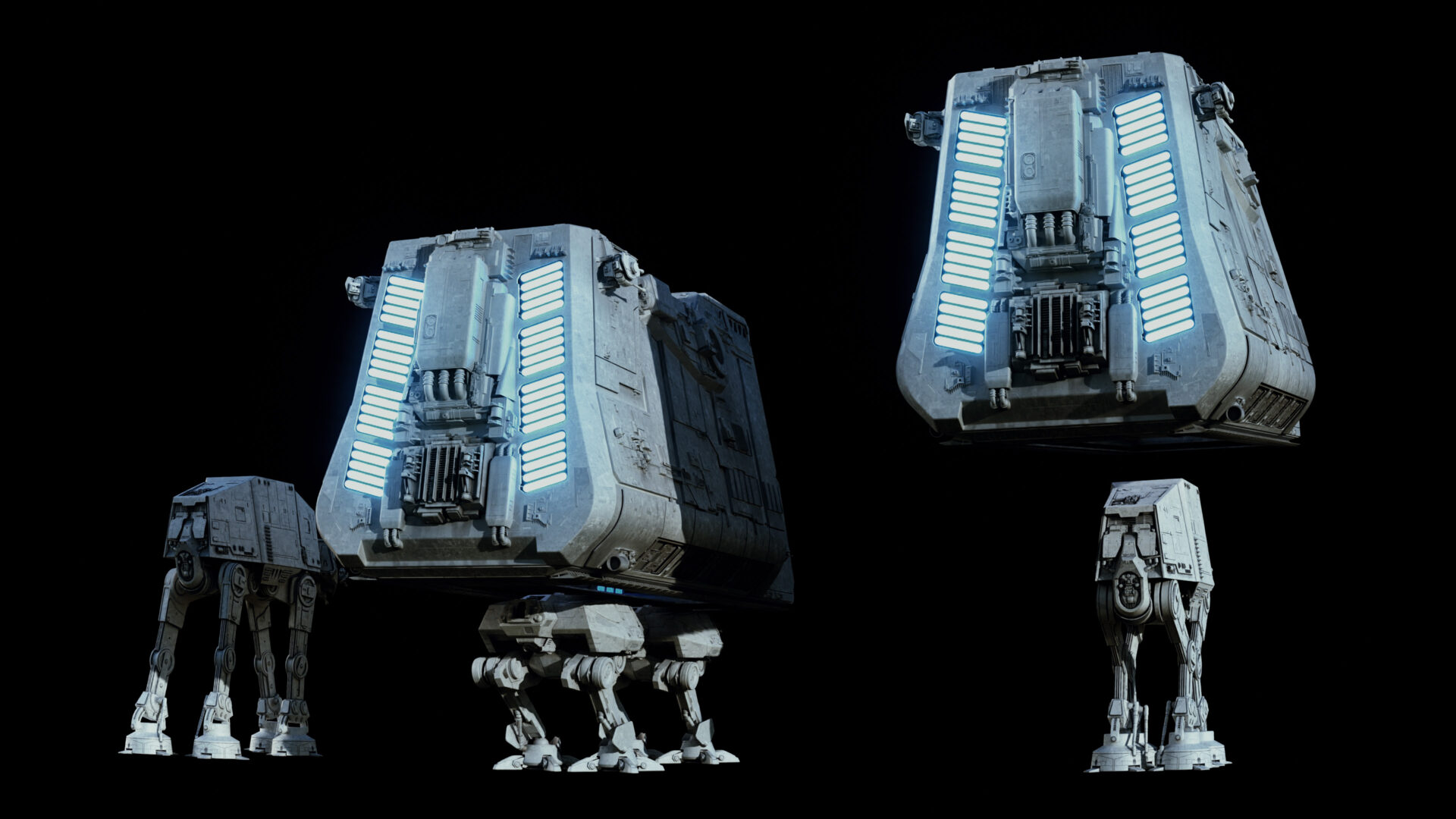 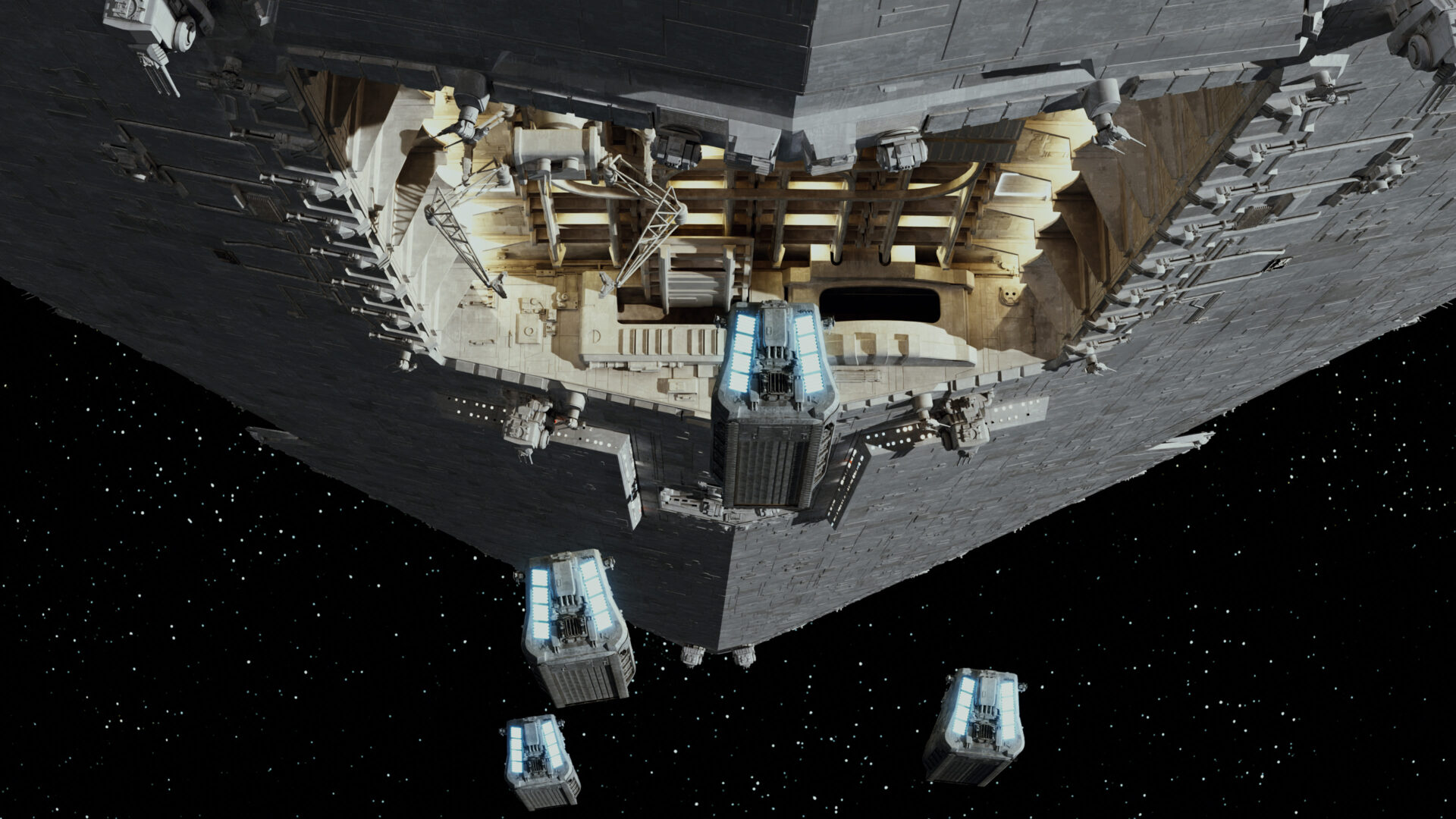 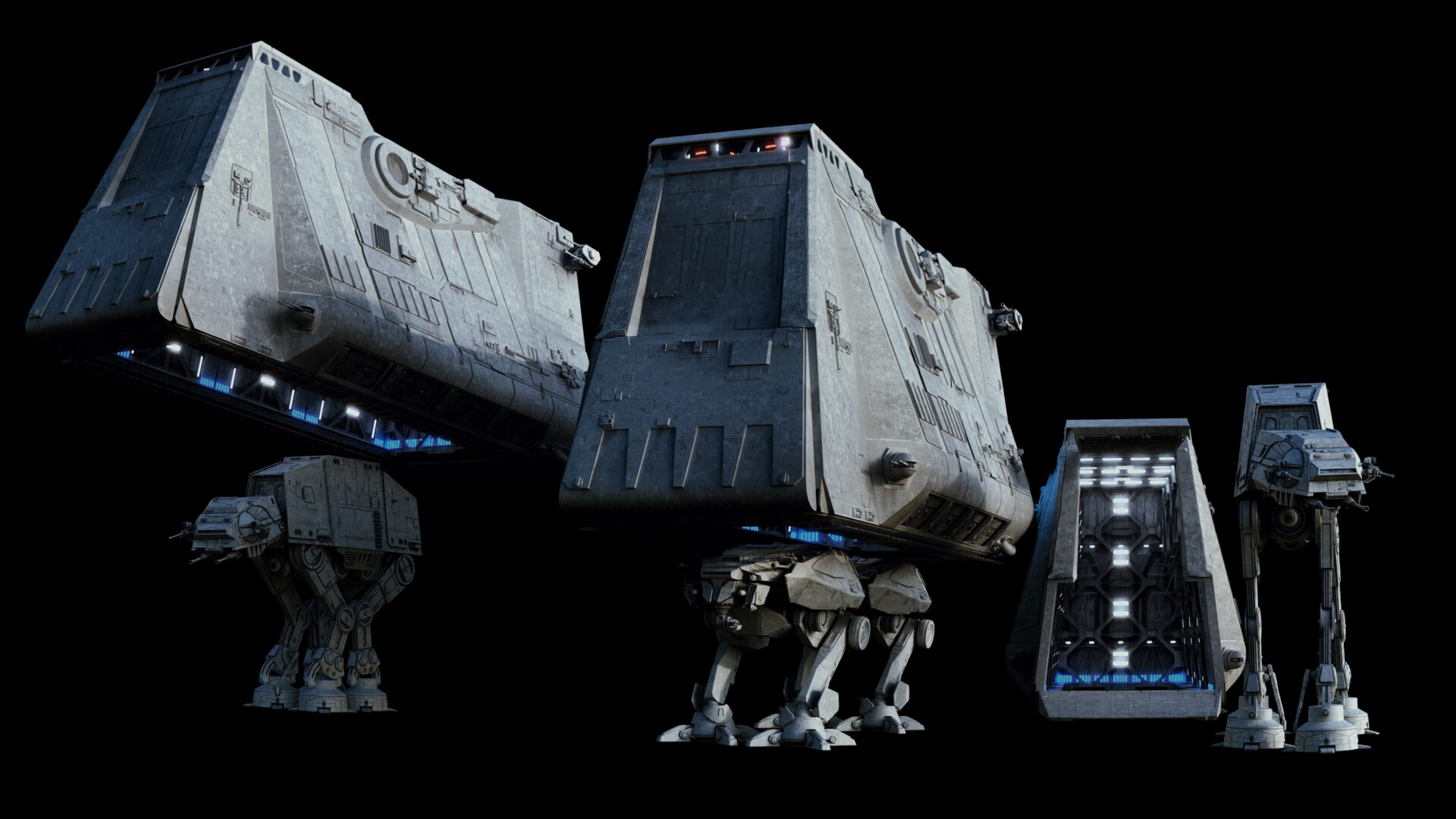 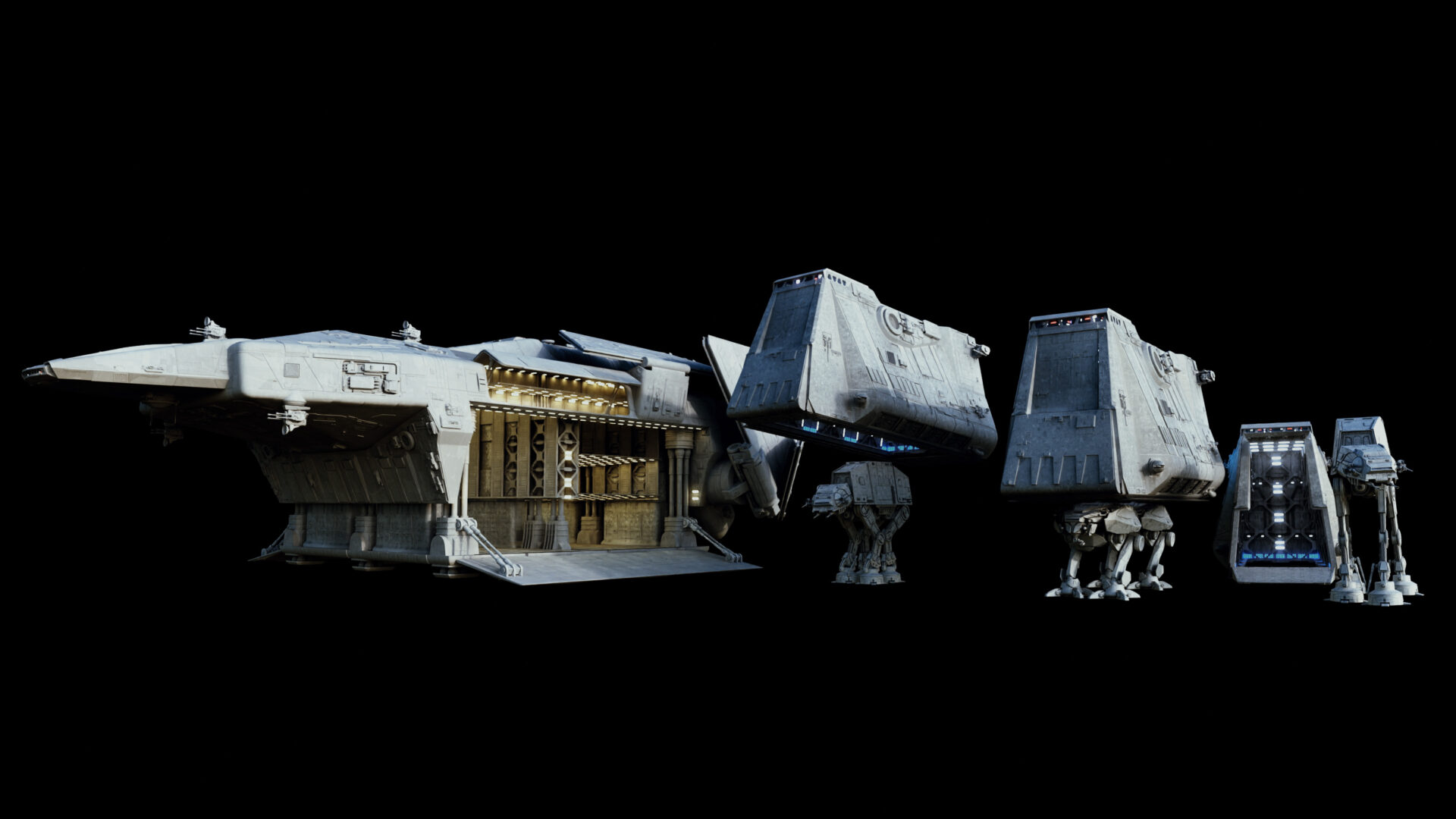 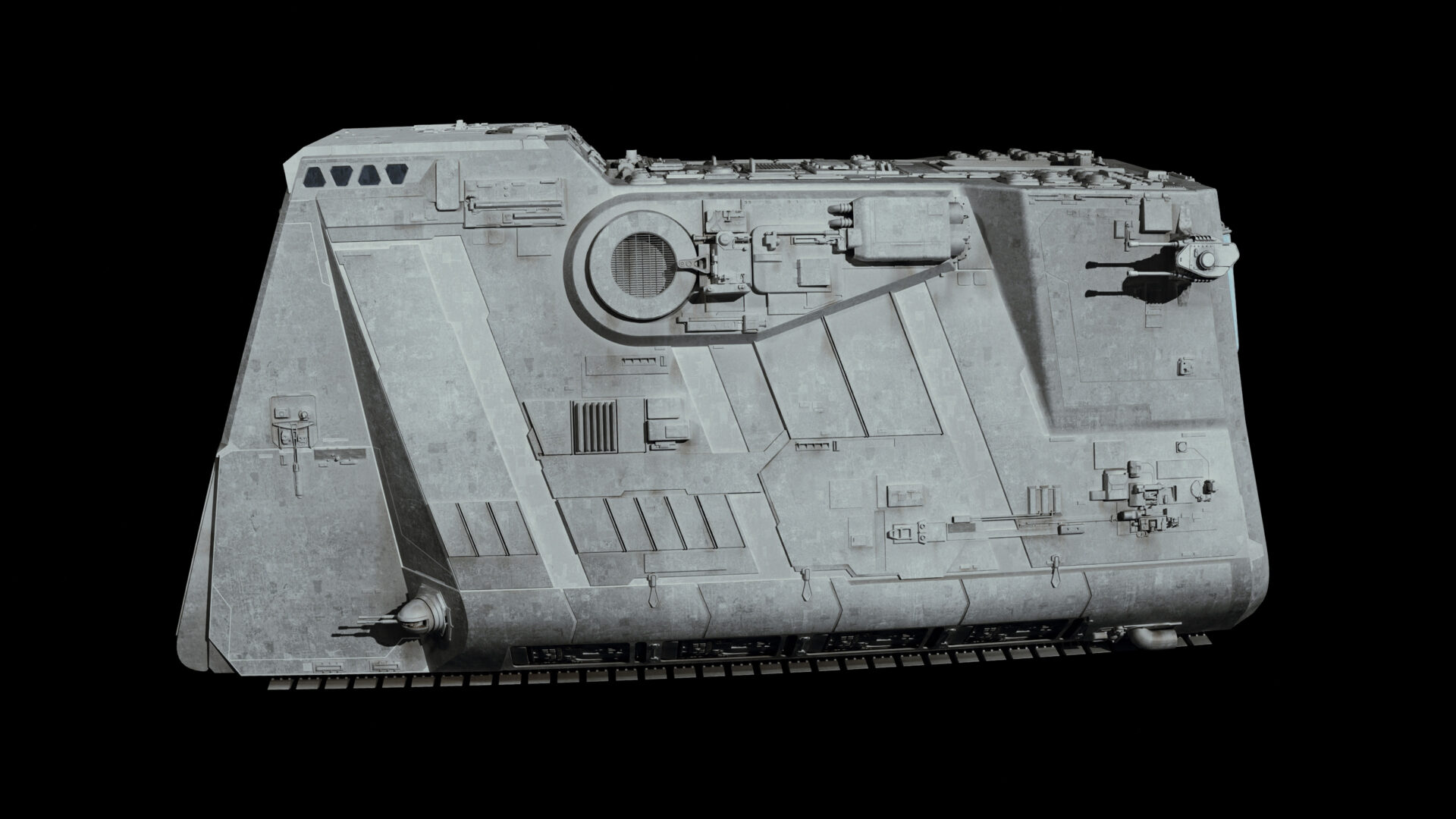 I love the way Fractal can take some of the most low detail or obscure vessels in Star Wars and bring them to life. I remember seeing this in the back round of the Incredible Cross Sections book for ANH. It was pretty undistinguishable and hidden. The work you do Fractalsponge is a credit to the the fanbase.

The Titan class drop ship always reminded me of the silhouette of the Trade Federation’s MTT.
I dunno which design came first in publication material.

I’m not really a fan of the Theta as it’s commonly depicted (a box around and AT-AT), it feels like someone misunderstood or tried to downsize the Titan dropship to force to to fit into an ISD, which was a stupid idea brought about with Saxton felt their was some kind of crisis when the Titan can’t fit INSDIE the ISD, when it’s rather obvious that it would be held in the bay quasi-externally like the Tantive IV was. What’s even more anoying is that they think they are then ‘smart’ by having a Gozanti pick up the AT-AT from above even though this would be in combination be TALLER then the Titan and even more impossible to get through the hanger door of an ISD.

The name ‘Barge’ really conveys a very simple slab like vessel that would not envelop the whole AT-AT, but rather just grip the body in some way and fly out some what forklift like. It’s completly defenseless and leaves most of it exposed, but thats consistent with the term barge and the reason why massive hulking things like the Titan exist for combat insertion.

The Theta design (from Force Commander) is far older than the Titan, which came out with I think the Inside the Worlds cross section book.

I too am not a fan of the Gozanti external carry.

I also think the Titan is sort of a stupid way to carry 4 AT-ATs. It wastes a huge amount of volume, and presents a proportionately bigger target relative to payload. As a Theta-style carrier for a superheavy vehicle, makes sense though.

Don’t disagree that Titan’s as depicted are wasteful of space, but they look to have the mass and shields nessary to protect their cargo and the room for large numbers of dismounted troops, AT-ST’s and other support equipment that a proper armored assault force should have, much like your own Chi class which they would be comperable to in size. Given how large the Theta has to be inorder to fully enclose it’s cargo the target size difference dosn’t really seem all that great when you would need at least 6 Thetas to do the same job.

Gozanti carrying of AT-AT’s COULD have been good, if they were carried side-saddle by a Gozanti modified specifically for this role, not vertically by the TIE carrier. In addition to being too tall, the belivability that the little tubes can hold an AT-AT’s weight is thin and the AT-AT has no known top hatch meaning the crew-access which is the point of the tube is wasted. Note that AT-ST carrying has none of these issues and is something I fully endorse.

If they had side-sadle carried the AT-AT then the natural flank extentions of the Gozanti could have cupped the AT-AT’s belly while mag clamps secured it’s side nearly flush to the Gozanti hull, the AT-AT head would rest right alongside or atop the forward bulges of the Gozanti where it could also be clamped. In both cases crew access between the ship and the AT-AT would be natural and convenient as the AT-AT has doors in these areas.

Rather then the silly and frankly completly unsafe and unsound ‘dropping’ of the AT-AT the Gozanti would land and then the AT-AT’s stand up and sid-step away. With a little knee bending or even a fully swept back leg stance for the AT-AT the ISD access becomes trivial because the Gozanti adds no height to the overal system.

i love the SQUATTING AT-AT THAT IS HILARIOUS! looks like it’s taking a DROP lol.

YMMV, but it’s never sat well with me that this was called the Theta, for a couple reasons. First, Greek Letter designations (Tionese Alphabet in-universe) are usually reserved for hyperspace-capable shuttle craft, and has been canonically preempted by the Theta-Class Shuttle from RotS; second, “Theta” doesn’t fit with the naming conventions of the other two known Incom Landing Ships (the Y-4 Raptor and the Y-85 Titan). For the purposes of my own headcanon, I’ve renamed this ship the Y-8 Gigas. There a couple subtle homages in the name: the -8 (Theta is the eighth letter of the Greek alphabet), and Gigas, the singular for Gigantes, the Giants of Greek myth who were born from the spilled blood of the Titan Uranus and were known for their strength and aggression (which references the clear familial connection with the larger Y-85). Take it for what you will.

Would love to see these along with LAAV/i deploying like how LAAT/i and LAAT/c deploy in the Clone Wars series for planetary assaults.

The walker looks like my kid trying to not pee their pants. Lol I really love your design! It’s great to see something so detailed and realistic! Ever thought of doing an interior shot looking out the bridge?

I wonder if Fractal will ever do the Escort Transport.

It’s gorgeous! Great compositions also!
I had started modeling the larger Titan barge a while ago, but did not get very far with the project. So I keep fingers crossed that this is somewhere on your to do list.

Wow! Another amazing model! Kudos Fractal! 😝👌 How many projects you got on the go at the same time?! Lol 😂

How many AT-St can the drop barge carry?

A lot, if you break up the volume with platforms, and if the -ST can fold as well as it looks like it can.

About 2 dozen maybe and could you make a AT ST. Thank you for your work Mr. Hsiao.

Nice! Now we have an official art source for the Theta-class! We need to start updating the Legends pages on wookiepedia sometime.

That’s beautiful. I recall discussing this ship with you at some length a while back, and it’s good to see the end result. Excellent work, as always.

Not sure on dimensions, but looking at the photos of the model, I think your armament stats would be more or less accurate? 🤔

Love that shot of them emerging from the ISD hanger! 😝

The two dual guns up front are Lambda-scale rear laser cannon, the guns up back and on the sides are AT-AT scale laser cannon, same as on the wings of the Zeta carryall.

What are the dimensions? Just eyeballing it (with the SWTC’s AT-AT length of 26 meters), it looks ~50 meters long.

Love it! I like how you posed the Chi-Class along side of it. Love the shot with them dropping out of the ISD hangar! Good work!

Do you have anything like this but for m6 walkers

we do not speak of the sequel trilogy.

Does anybody know what the m6 walker is, is it legends, or just made up like the rest of the “squeal trilogy”.