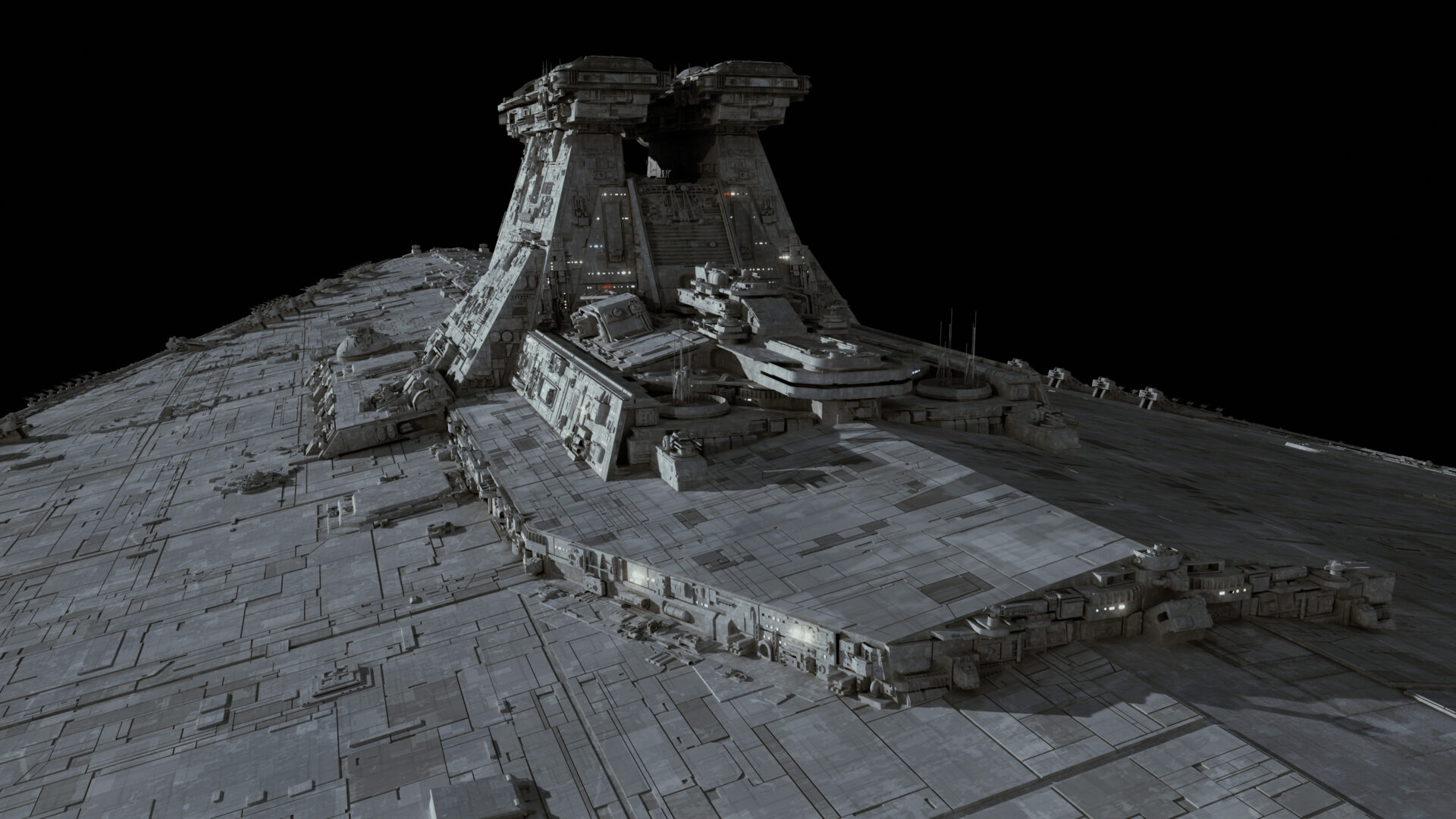 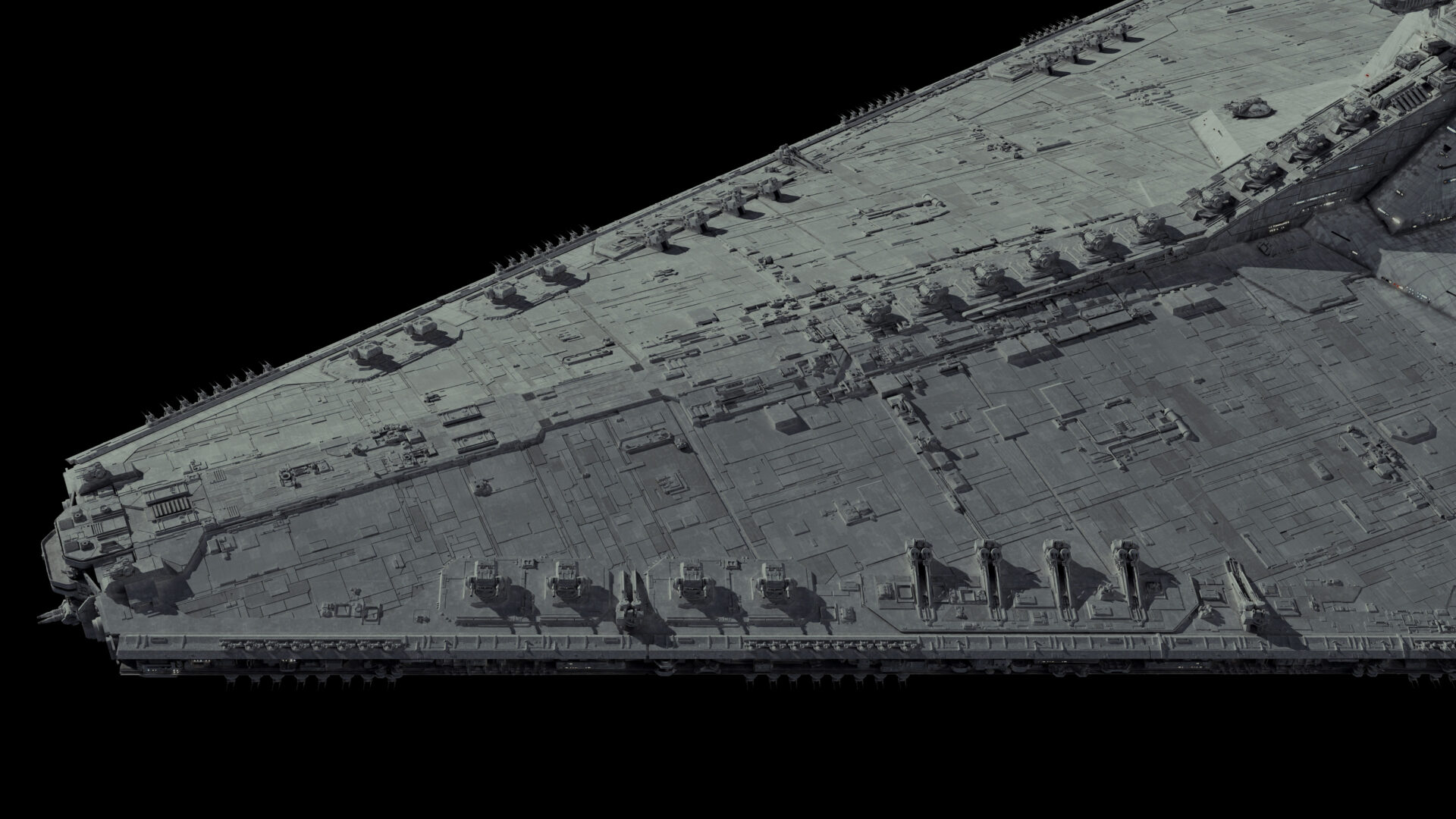 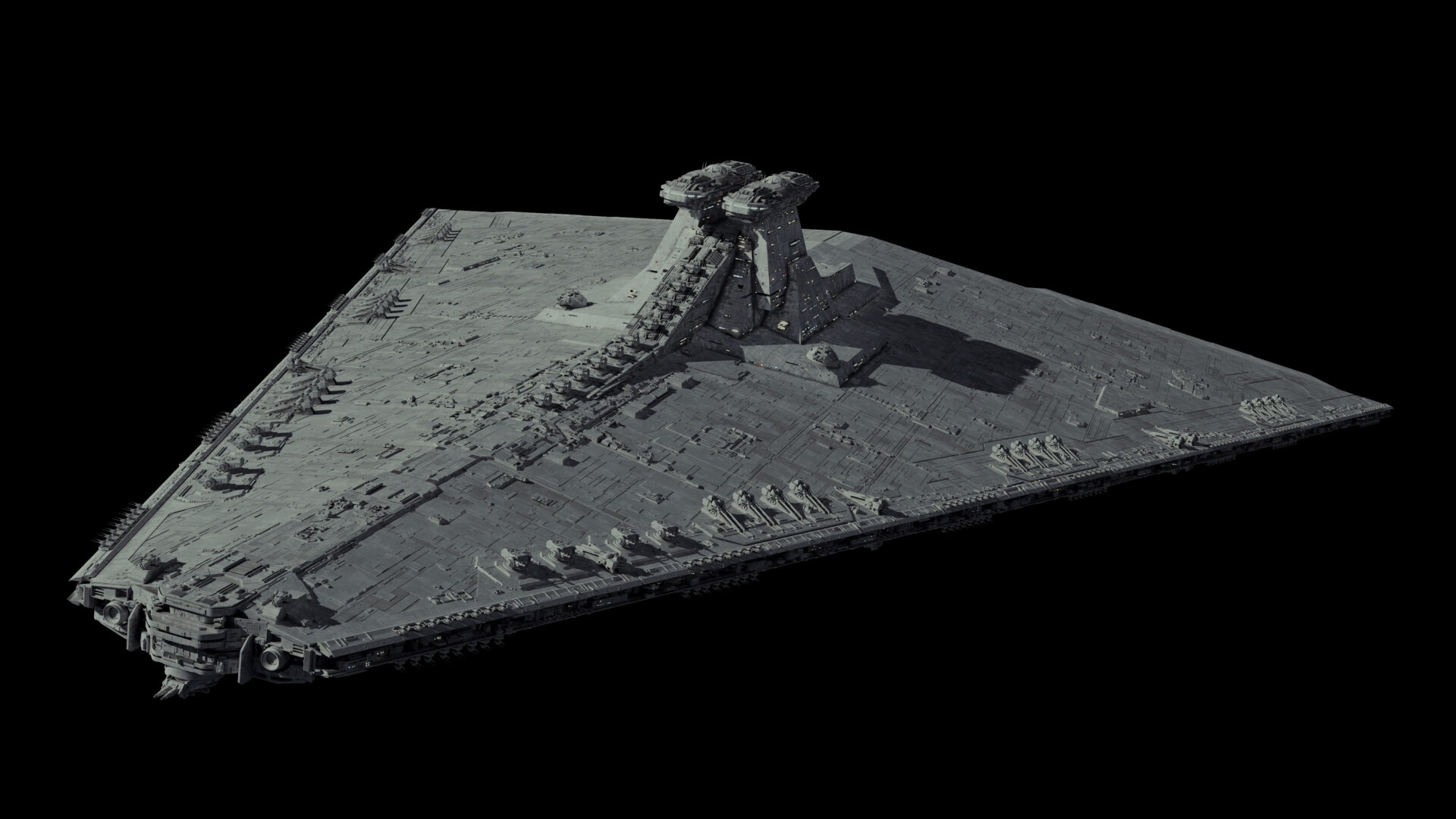 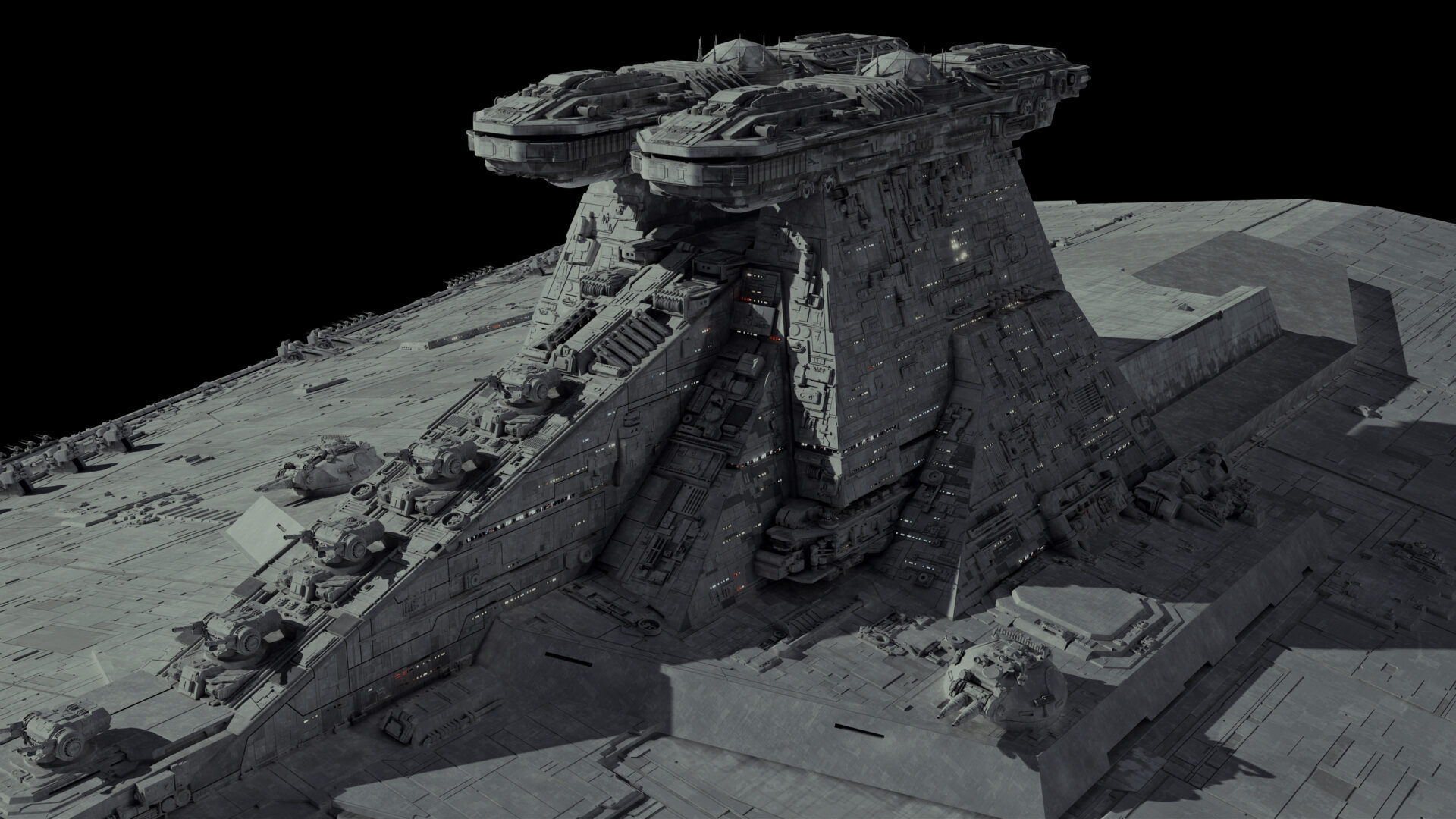 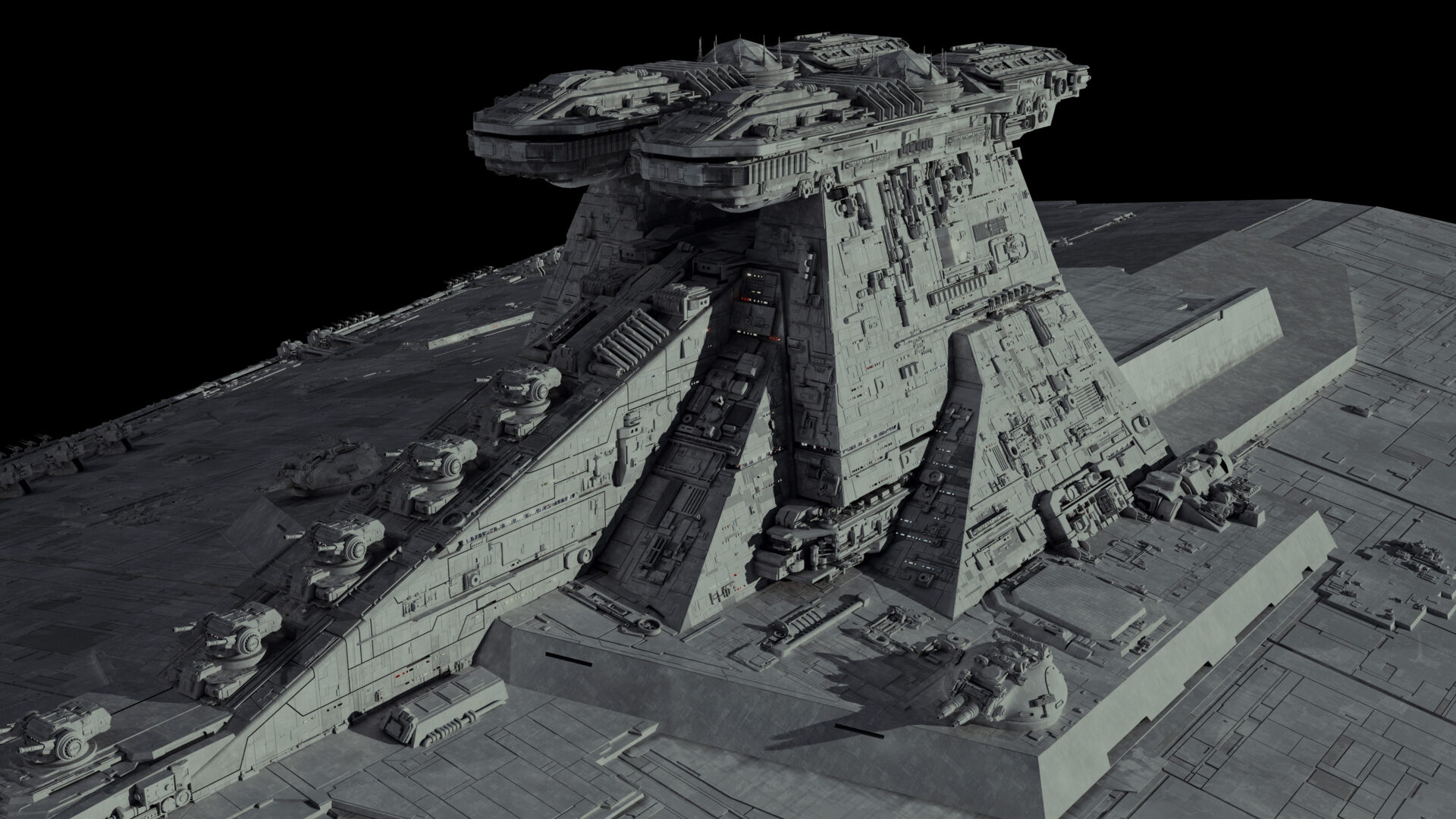 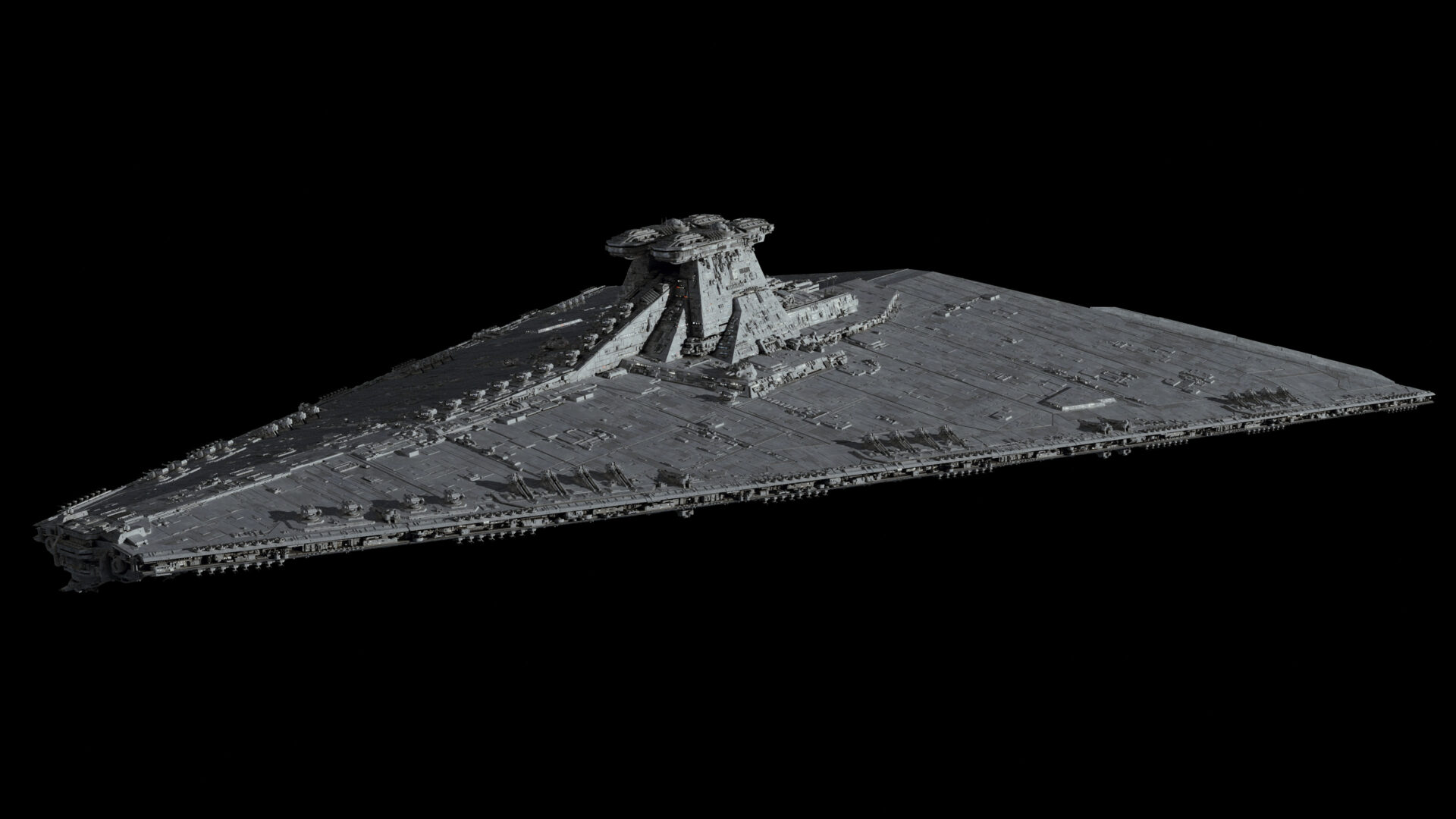 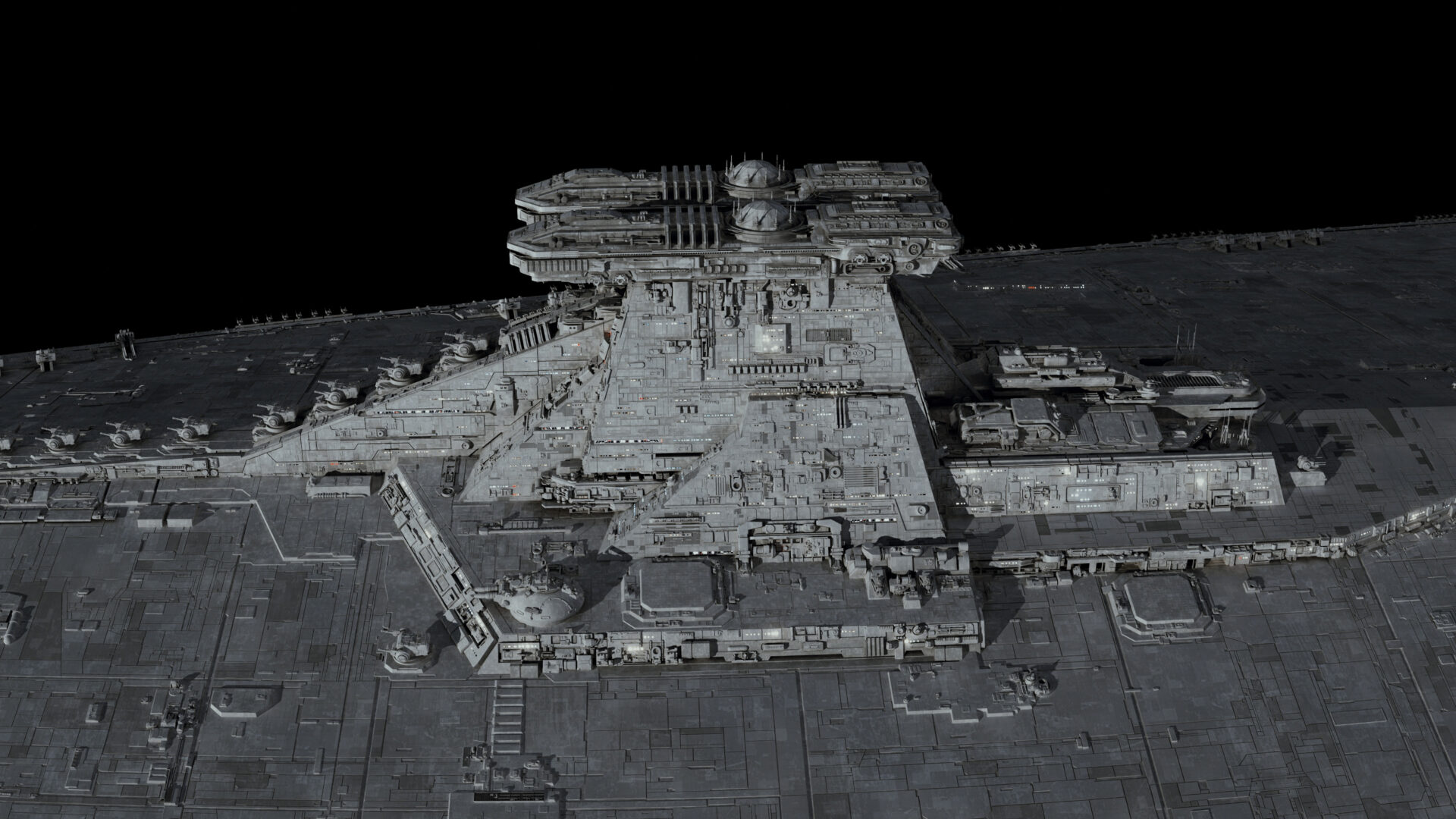 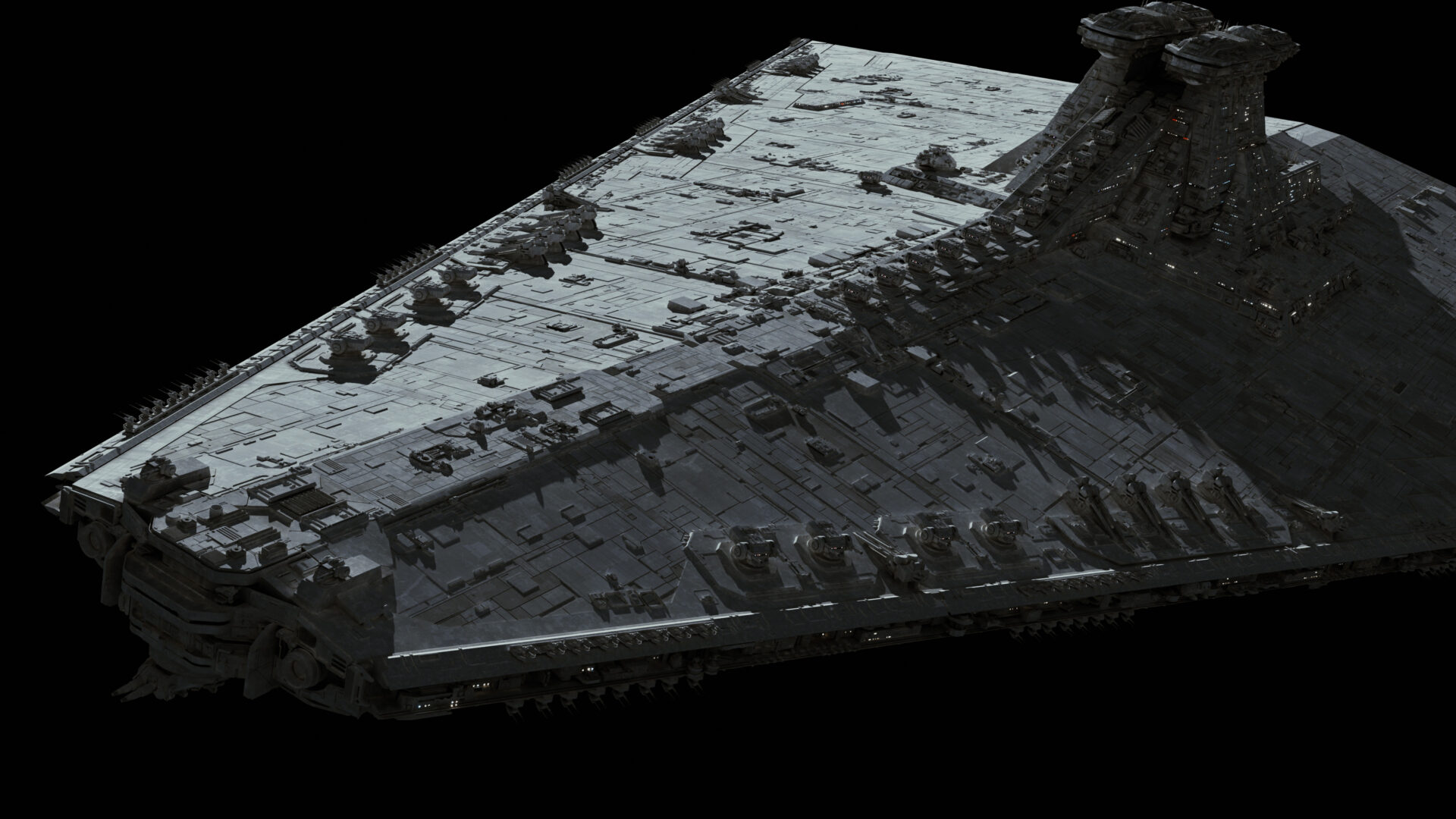 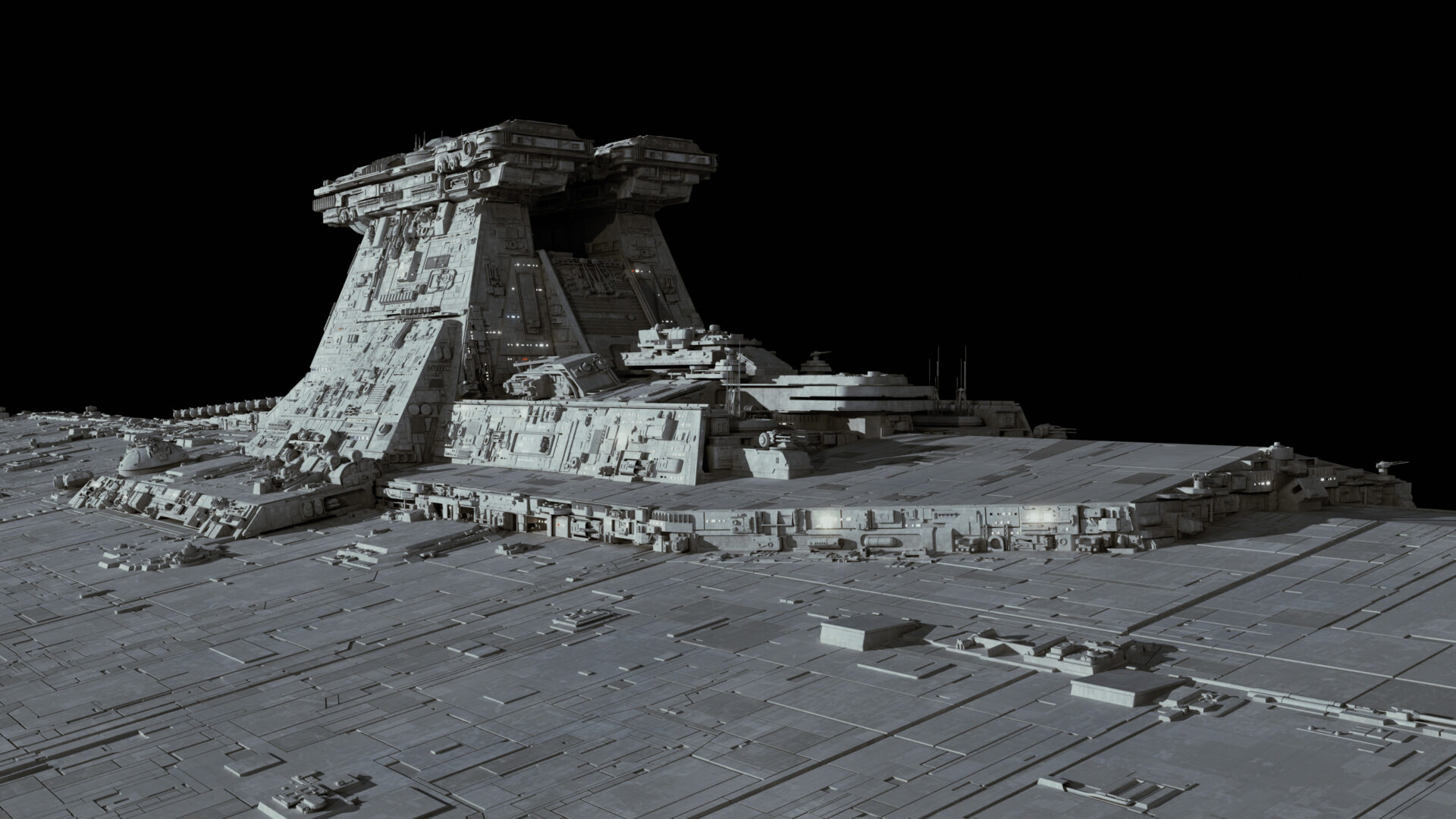 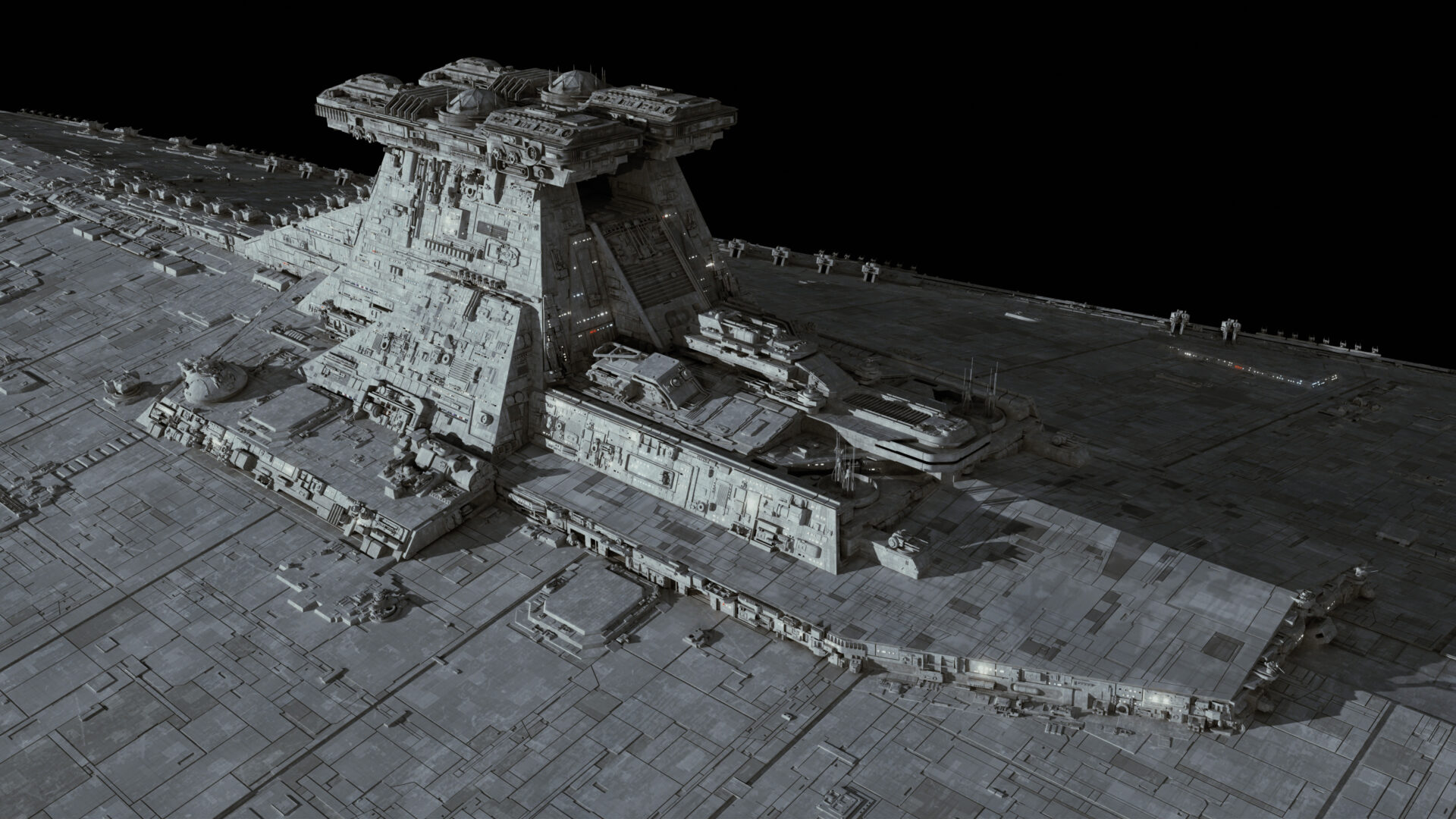 are you interested in a X4 Mod that is currently in development?
https://www.nexusmods.com/x4foundations/mods/349

Super curious how you get that “panelization” on the ship, it looks fantastic.

I have always loved this ship. You are always doing a great job. Could you make a vt49 or a mando lancer class ship.

I always found it odd that the Secutor has no top or lateral hangar doors given that it has obvious Venator lineage. Given it’s role as mostly carrier it seems to lack the number of access portals and throughput capacity to scramble it’s star-fighters in adaquate time the way a Venator can disgorge them from multiple points, particularly when it should have more internal hangar space and thus more fighters given it’s much larger size.

Ships like the ISD are listed as having 6 squadrons of TIE’s that would need to be scrambled rapidly, but given the known planetary assault complements and their dropships we know the ship must have far greater actual internal hanger space, I’d estimate if devoted fully to TIE fighers it could probably carry 16 or more squadrons, which helps to close a lot of the aparent gap between the ISD and the Venator, the later has no planetary assault dropships onboard, all stowed craft are fighters and need to be scrambled into action rapidly, thus doors everywhere. A planetary assault dose not need this kind of rapid launch capability.

Concentration of hangars is to avoid Vanator’s “feature” of it heaving to either present a surface with hangar opening and associated gap in ships’s frame from all angles except the one with engine bank, I suspect, both of which one would want to avoid.

And given its hangar structure with multiple hangars per each bay, it seems to me that sortie rate wouldn’t suffer all that much.

Also, I’d expect Secutors to be retained in reserve fleets where it would be loaded with space superiority outfit (8-10 wings). There are occasions for which you’ll detach them to independent duty which would require serious ground complement with proportion like that of an ISD. But such cases should be fairly limited as Secutor represents a much larger force commitment than an ISD yet makes the same job, and most of the time ISD will work just fine.

Correct me if I’m wrong Fractal but is this Secutor gonna be the original republic secutor?

Because this one is armed with nothing but the venator’s main guns the DBY-827s.

And the old secutor model has quad turbolaser turrets instead. If that’s the case are we gonna see this one in republic colours? Because that’d look pretty amazing.

I eagerly anticipate the finished product.

Do I have to beg in order to eventually see a version of this in Republic livery? Because I’m prepared to do so.

I’m not a 100% sure but I think this version might be the republic one.

Because the old secutor model has Quad Turbolaser Turrets. While this one has nothing but the republic DBY-827 Dual Heavy Turbolaser turrets.

So I’m pretty sure this is the republic secutor.

Good point, plus, this one has a lot of point-defense turrets along the trench, which seems like another Republic-era feature.

Have you, by any chance, looked at any of Fractal’s models of Imperial warships? Any at all?

I take it that you haven’t noticed that the Imperator Redux, Fractal’s current definitive Imperator model, is of the Imperator II subset then. All of Fractal’s newer models have point defence, for the most part because he has the processing power these days to include high-poly proxies like turrets on a large scale. The plurality of the polygon counts for most of his newer models is made up mostly of the point defence batteries – the Venator model, for instance, had 59 million polygons, of which 15 million were its point defence batteries. A large part of the reason why he did not do point defence on his earlier models is just that early 2000s-era rendering would have made adding in a significant amount of discrete turrets pretty hard on the GPU doing the rendering.

Just as a PSA, since you don’t seem to understand the concept of a Redux model, I’ll explain it in simple terms for you. Redux models are full makeovers of earlier models to bring them up to current-day standards. Once Fractal makes a Redux model, he considers the older ones obsolete – hence why you’d never see the older models in group shots. The older Secutor/Imperator/Bellator/What have you models are part of this – he’s redoing them because he’s unhappy with some aspects of the older model and wishes to update them, not to add another model to go alongside them. Think less a complement, and more a full replacement, and forget the idea that the older model is relevant. It is not. If you would like to ask Fractal himself about the process, feel free to join the Fractalsponge discord, where elementary things like this can be explained to you in great detail.

Published specifications, namely WEG – a roleplaying game that didn’t intend to include Imperators as a player vehicle in the first place, and forgot the most distinctive feature of its armament in the first place. Man, I’m on Fractal’s discord server. I have talked to him about what he intends to get out of this model. I can give you a full deep dive into his thought processes behind the various Imperial warships he has produced. If you would like, the link is available to that server here on this website, where you can talk to him. Otherwise, you’ll just have to get your impressive quantities of hubris out of your system yourself – the idea that you, an armchair theorist, would know more about this model of the Secutor than the person who literally designed the Secutor in the first place is astonishingly arrogant.

Fractal’s general idea for the Secutor is that it’s a ship commissioned on the tail end of the Clone Wars – same design generation as Imperator I and Tector, as a matter of fact. It wouldn’t change going into the Imperial era, unless an entirely new version of the ship is made. Considering that the Empire seemed to go for a change from Tector-Secutor fleets to the multirole Imperator, not likely that you’d see a new version of the Secutor getting built over more Imperators. So, in essence, there is no Republic Secutor, as opposed to an Imperial one – the only real difference is the paint job.

This is a Redux model – it’s a visual update of the original Secutor to match the new modelling techniques and assets Fractal’s picked up over the years since he did the original Secutor model. So, yes, it is indeed the retcon option. He’s specifically redoing the Secutor to complement the Venator he just made, and to take advantage of the higher-poly DBY model he built for that. You can expect him to make a Legator Redux in the future, for similar reasons.

I can get behind that due to the definition of “redux.” Still, looking at this beautiful murder wedge and seeing the changes made to it makes me think “Republic-era” instantly. It looks marvelous with all those dual DBY turrets everywhere and the updated bridge design.

The idea of the Secutor being a republic era vessel that was developed near the end of the clone wars was something that has already existed in the EU for a very long time.

And there aren’t really any pictures of the secutor in republic colours which I very much wanna see.

The Secutor does not exist without me, so I think being in the EU for a long time is a stretch 🙂

Secutor first appeared in the dark empire comic series in the byss fleet so it’s been around for about 33-34 years.

We 100% wouldn’t have it or any of the great models of star wars ships we have though without you.

And I meant no disrespect with what I said I enjoy your work you are a truly a master when it comes to models.

No, a little squiggle appeared in a dark empire comic. I lay absolute claim to the Secutor 😀

Fair enough, you’ve done a great job with the squiggle you were given.

I hope to see many more squiggles be given design and shape by you.

Fractal’s first model of it was literally the first time the Secutor was created – he’s both the one who decided the name, and created the initial depiction. The only appearance before then was as an indistinct background squiggle in a Dark Empire comic, in which it was unnamed, and not specifically pointed out. In a sense, there is no Fractalsponge version of the Secutor – his version is the absolute definitive one.

I agree his versions are the best depictions of it 100%.

I don’t disagree with that at all.

That makes sense given that it’s always been alluded to but never been confirmed to be a late clone wars design.

The only reason why I thought this and the other secutor might be different models is because the original was much, much more heavily armed in an imperial fashion with mainly the octuple barrette style quad turbolasers And I think it even had concussion missiles and very few if any Point defense.

Where as this one is armed with a typical armament found in the clone wars on the republic side and is a downgrade in terms of firepower.

So a pretty drastic change in armaments. Personally I like this one better.

The old quadruples were also 40TT/shot/barrel vs 70TT for the twins, so they are approximately equivalent anyway.

Ah ok I didn’t know the power for each turret was that close to each other.

I guess it evens out nicely then. Honestly given how the DBY-827 operates it’s got better utility then the old turrets do so it’s better for the role the Secutor has anyway.

First to comment! Man i love the models and I cannot wait to see this right along side the Venator in Republic colours!