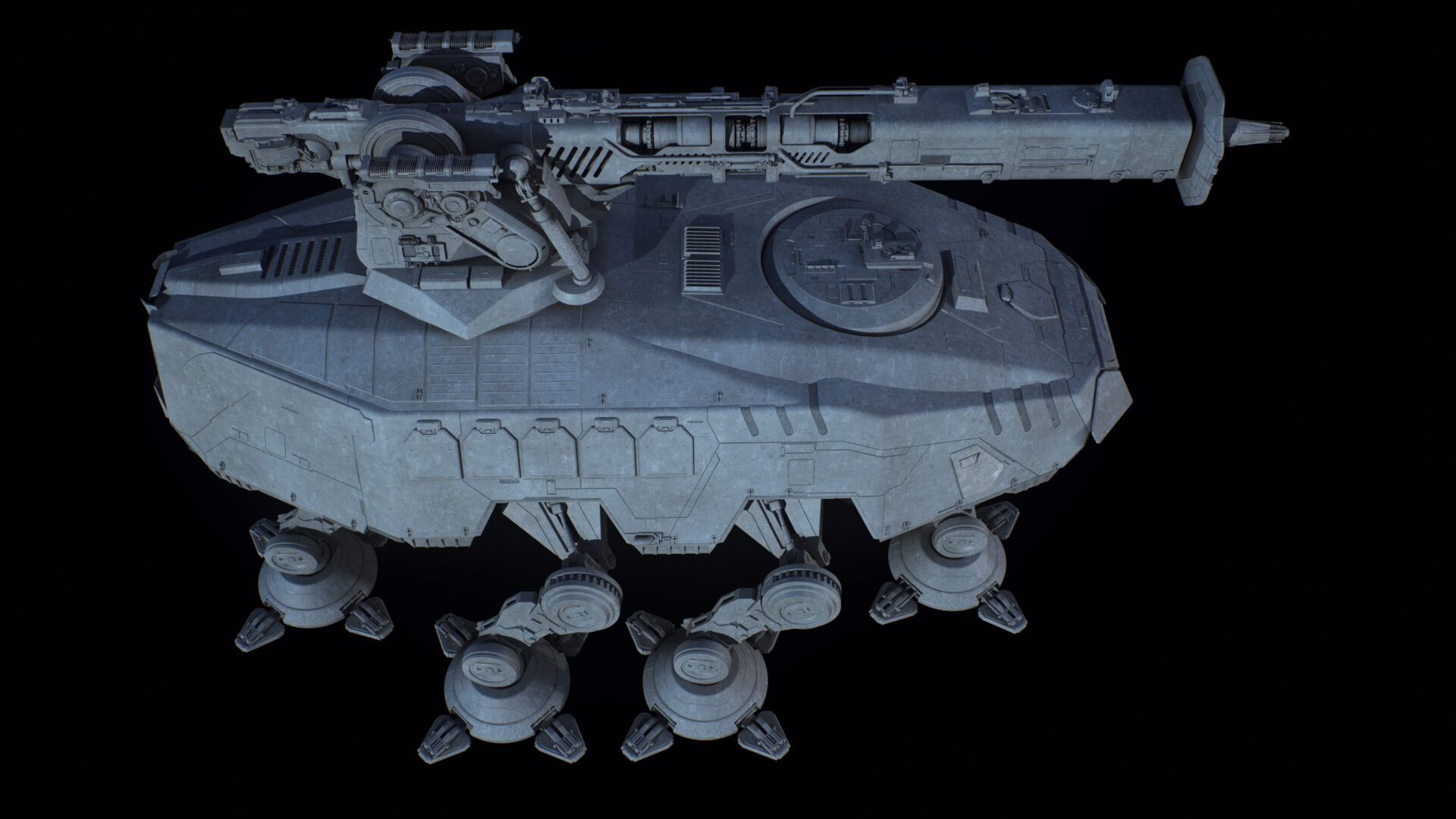 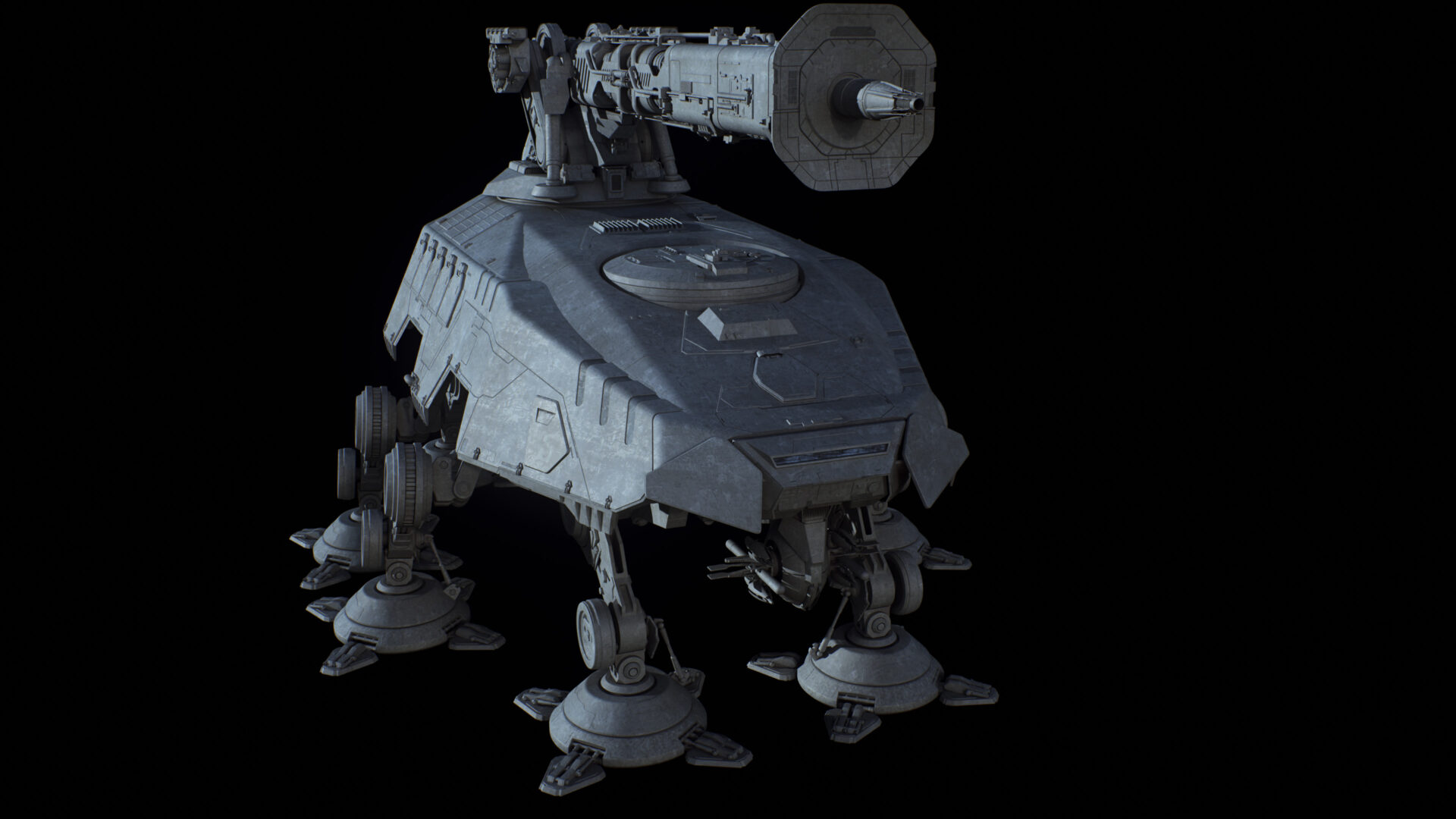 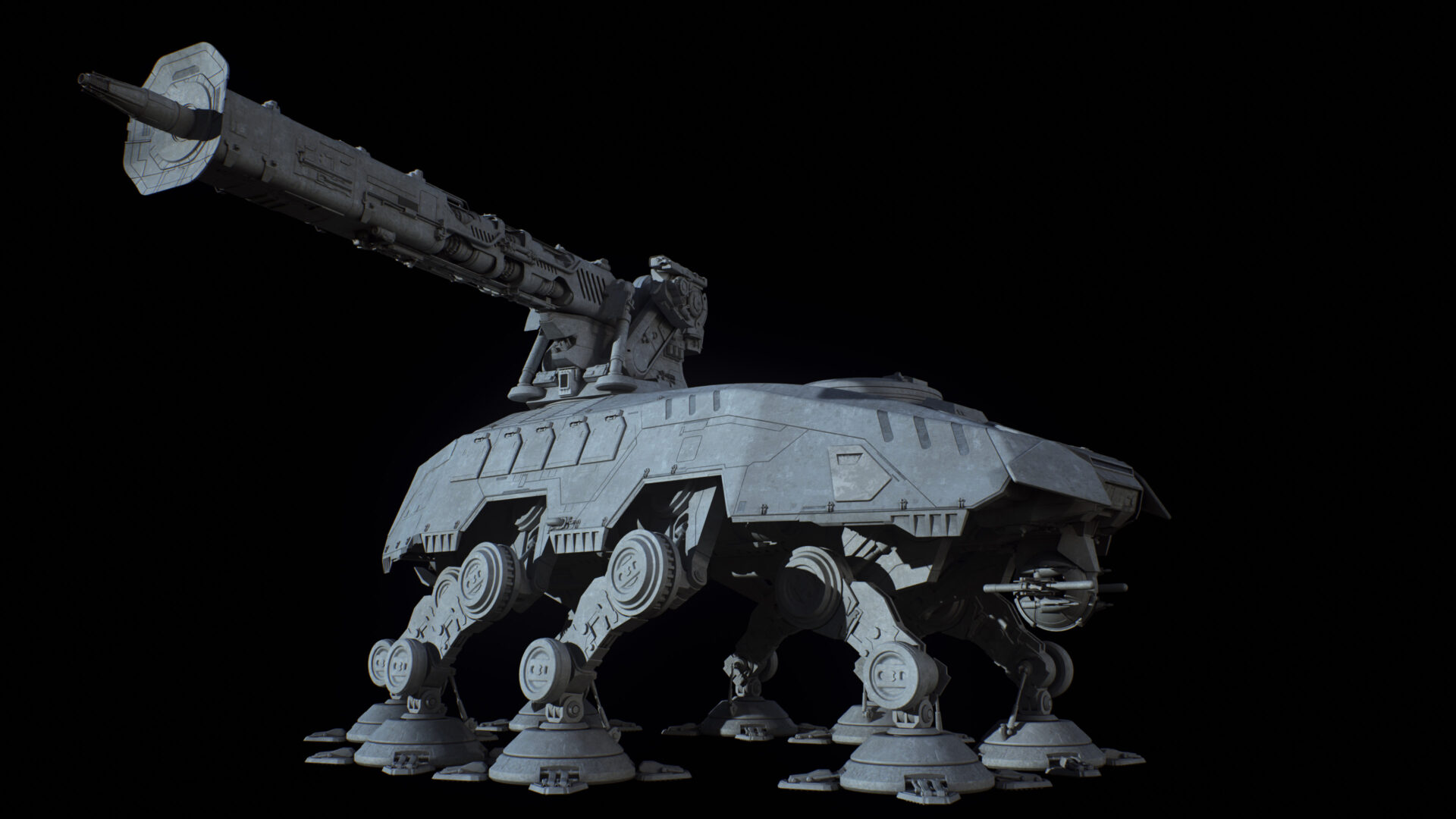 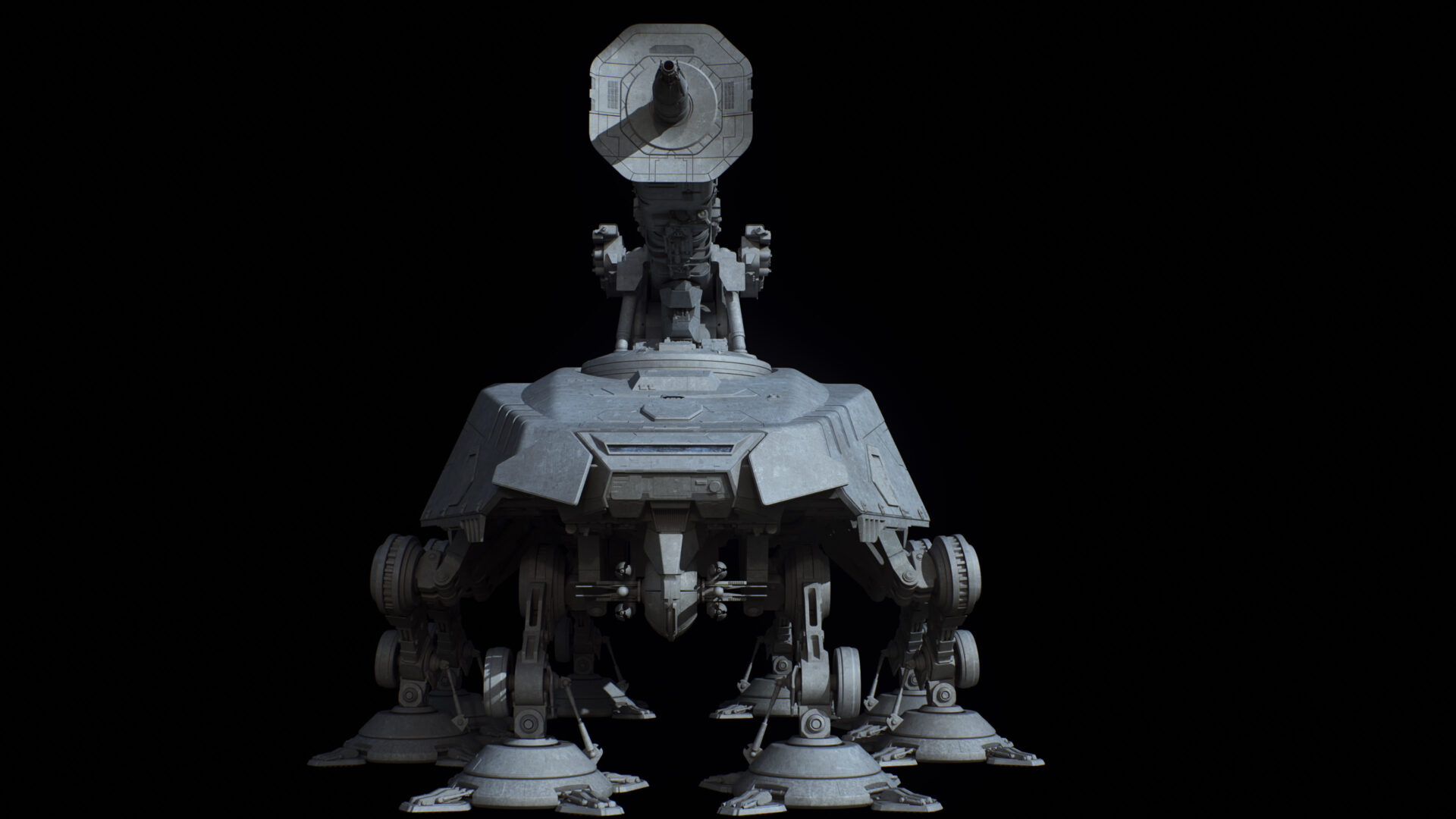 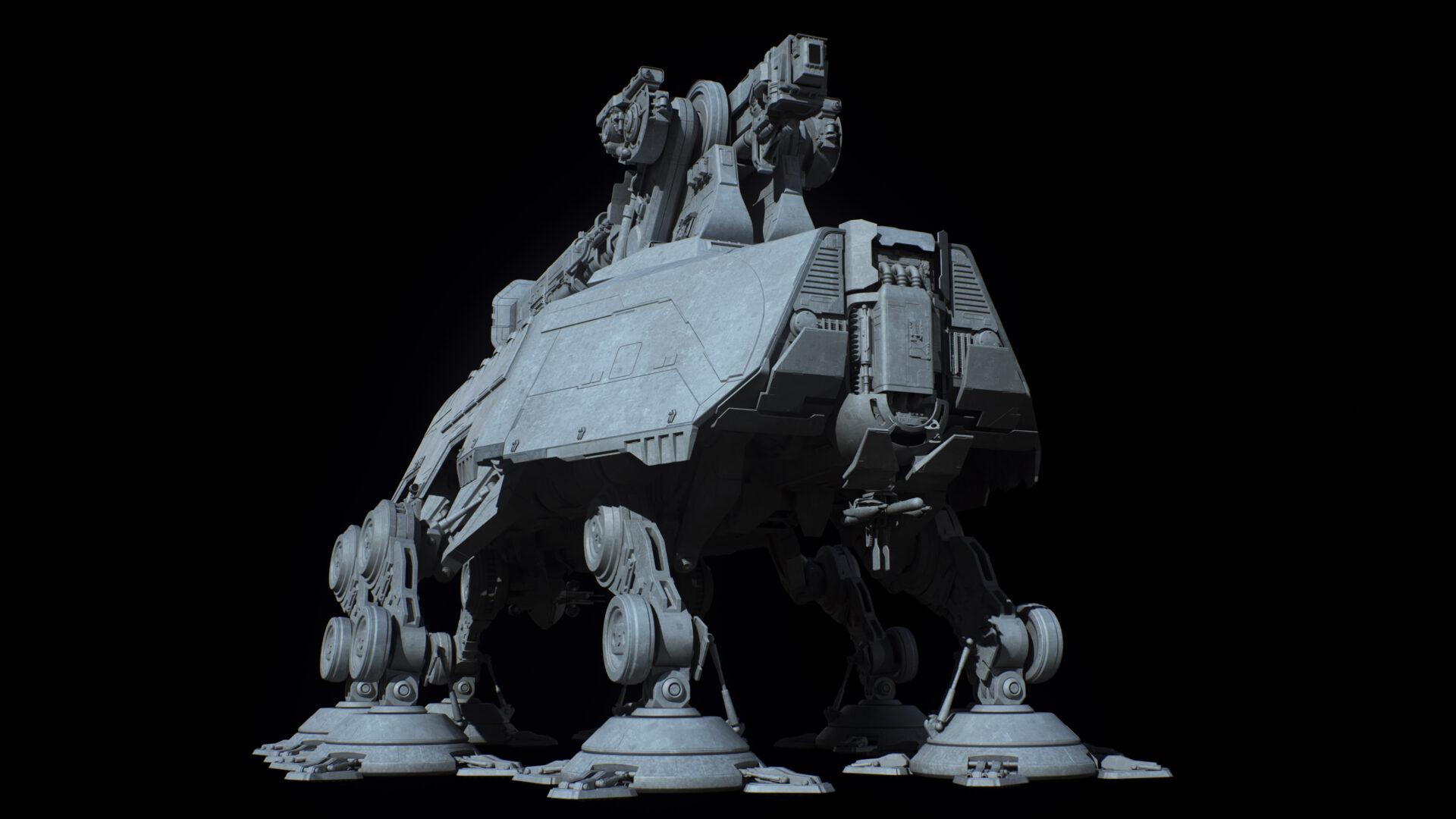 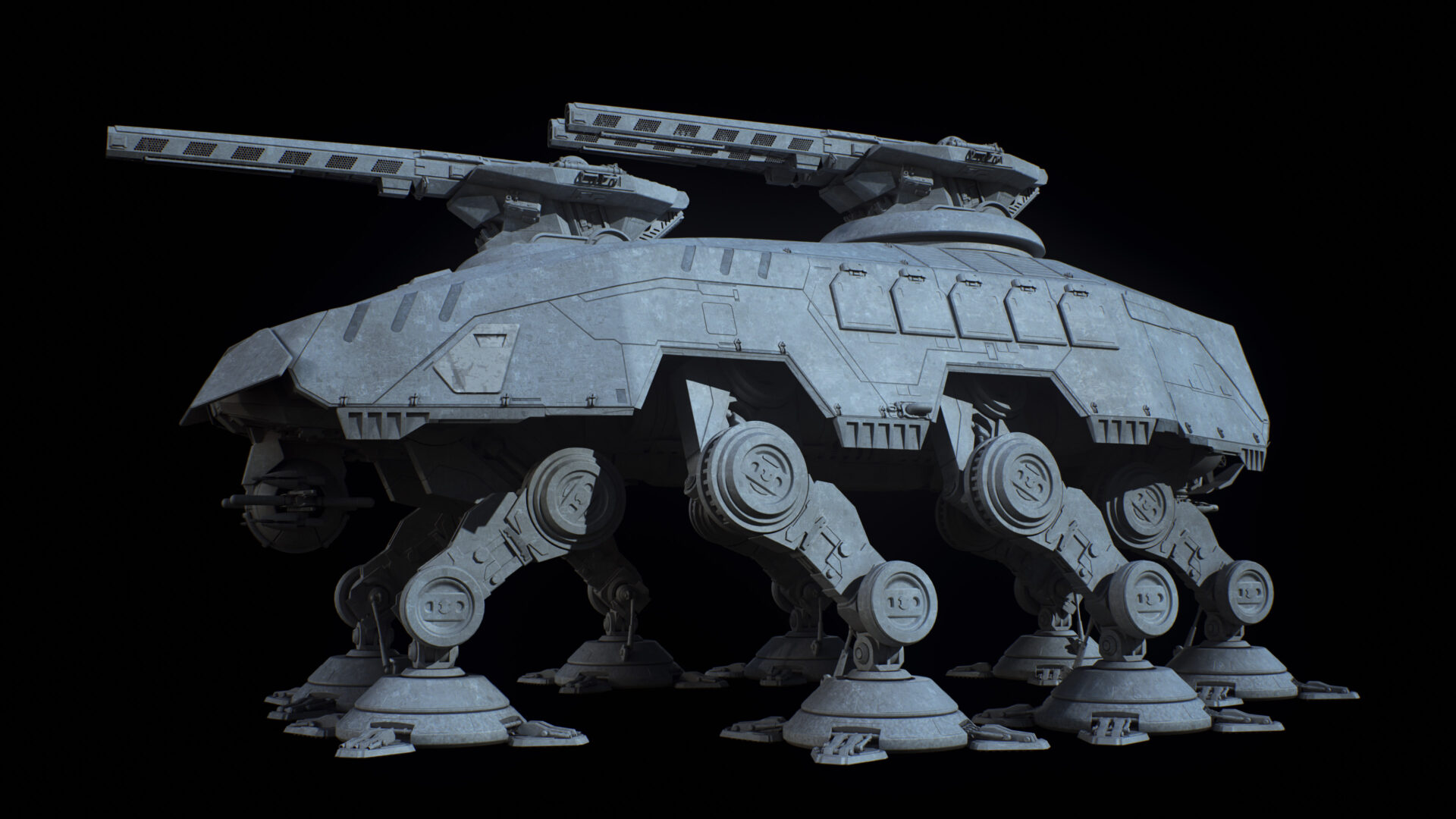 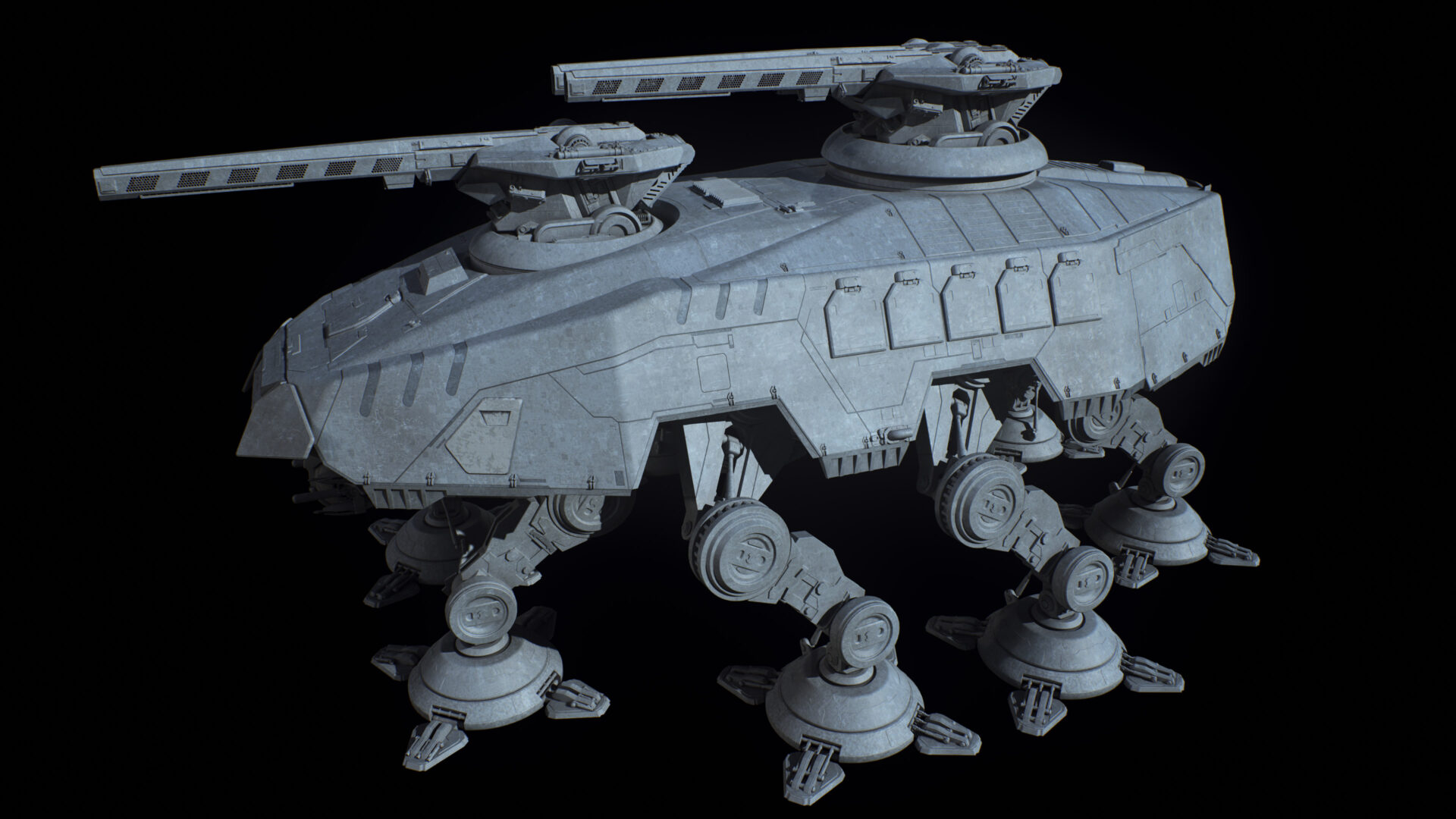 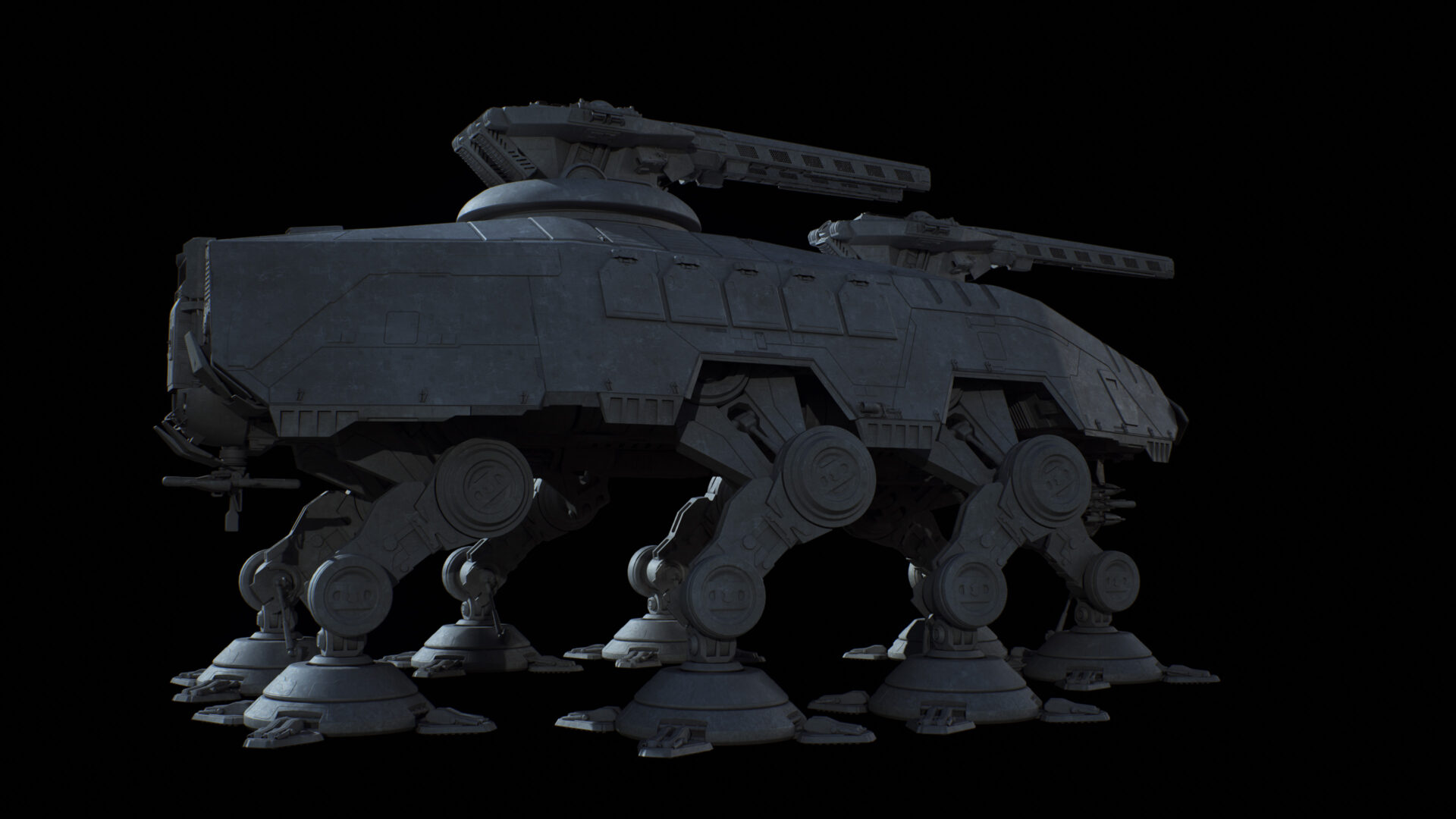 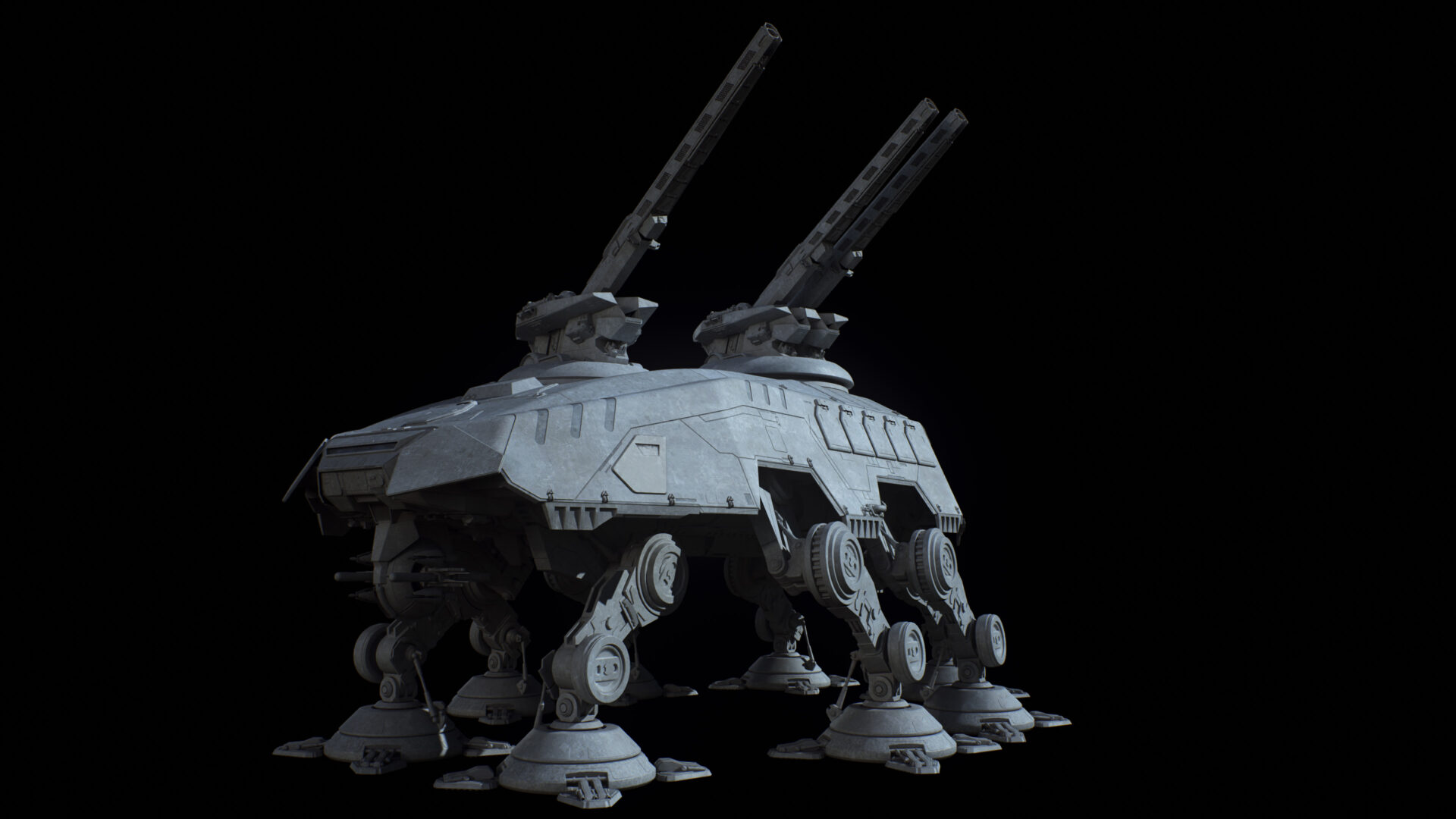 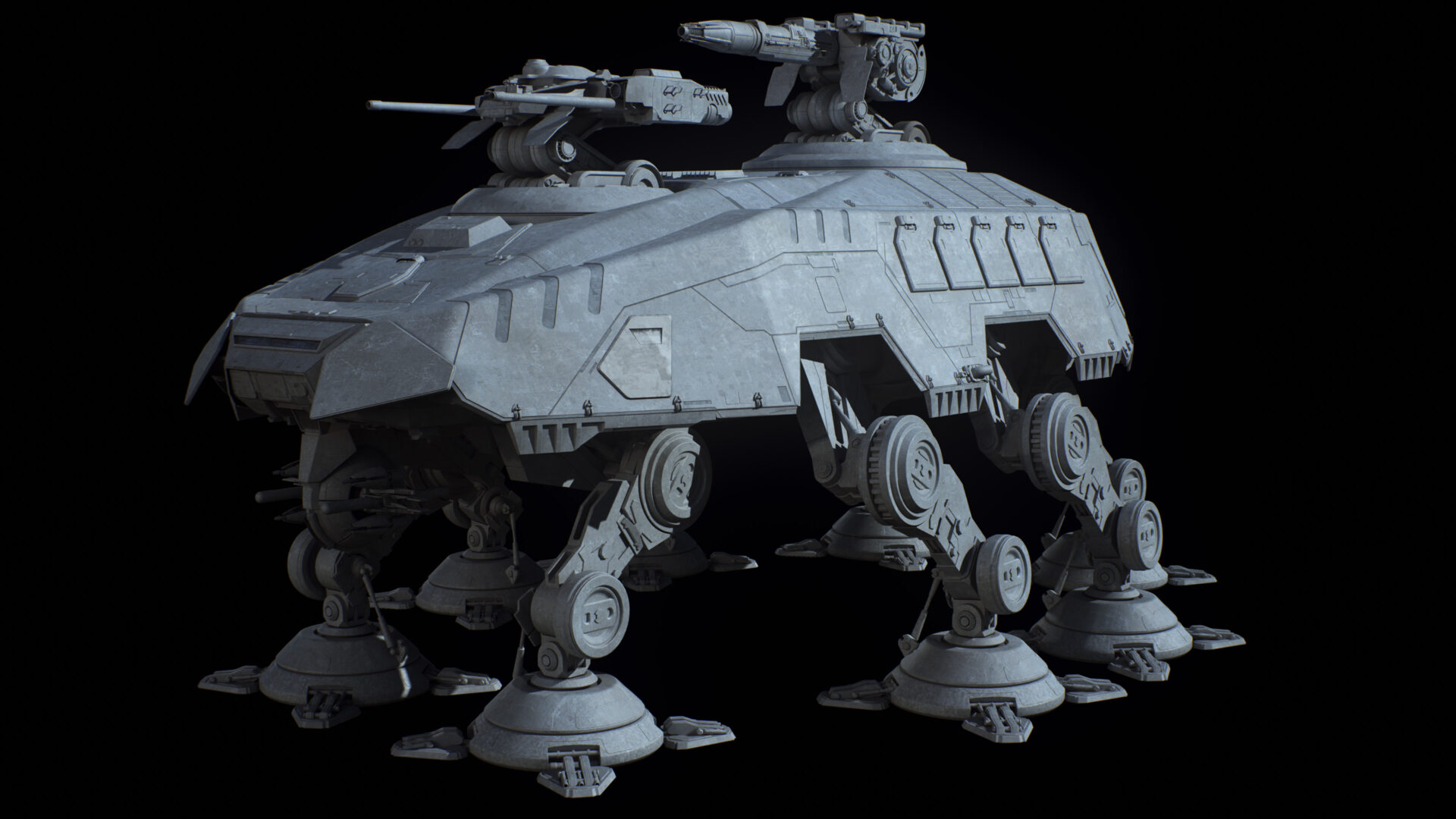 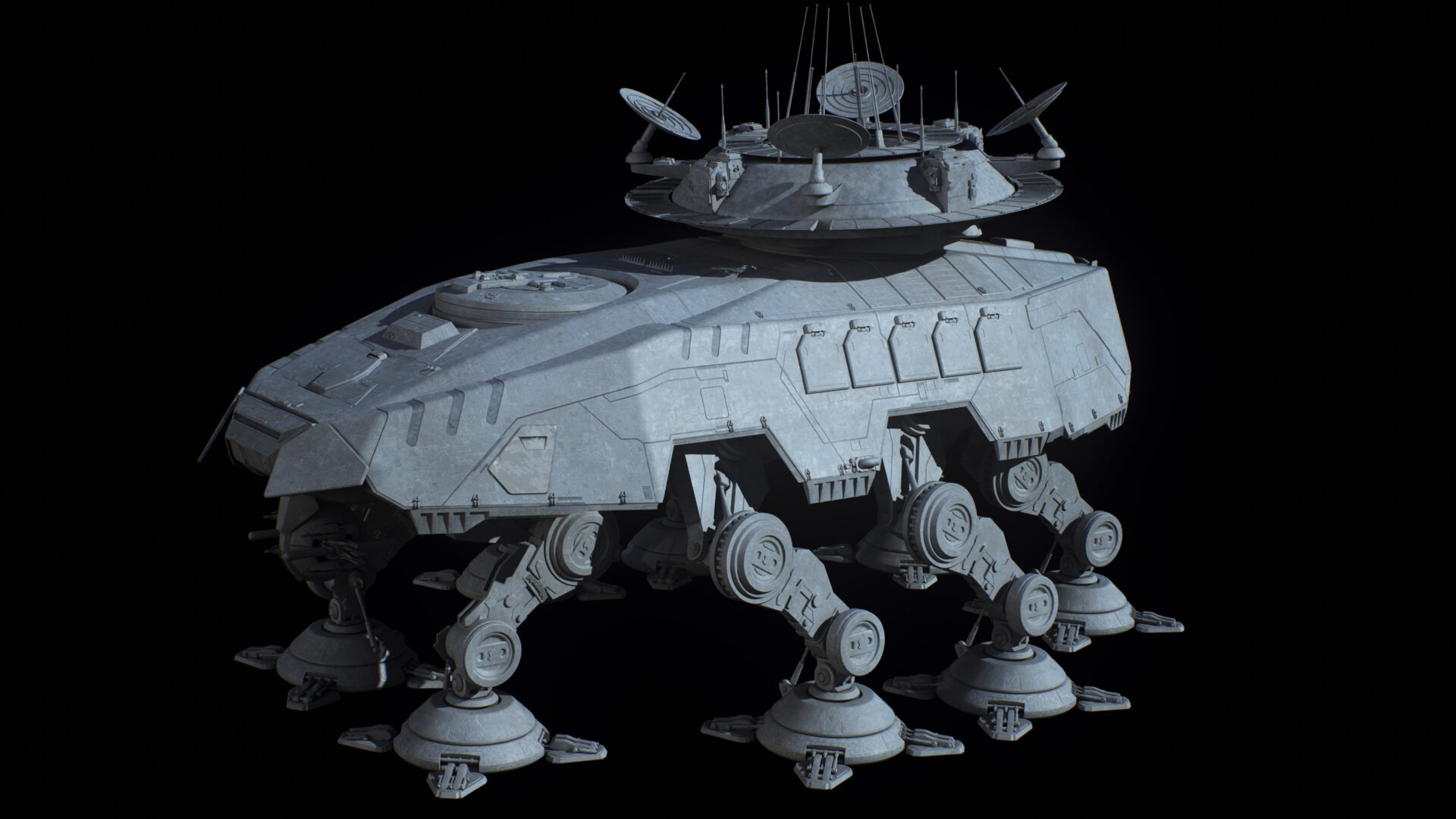 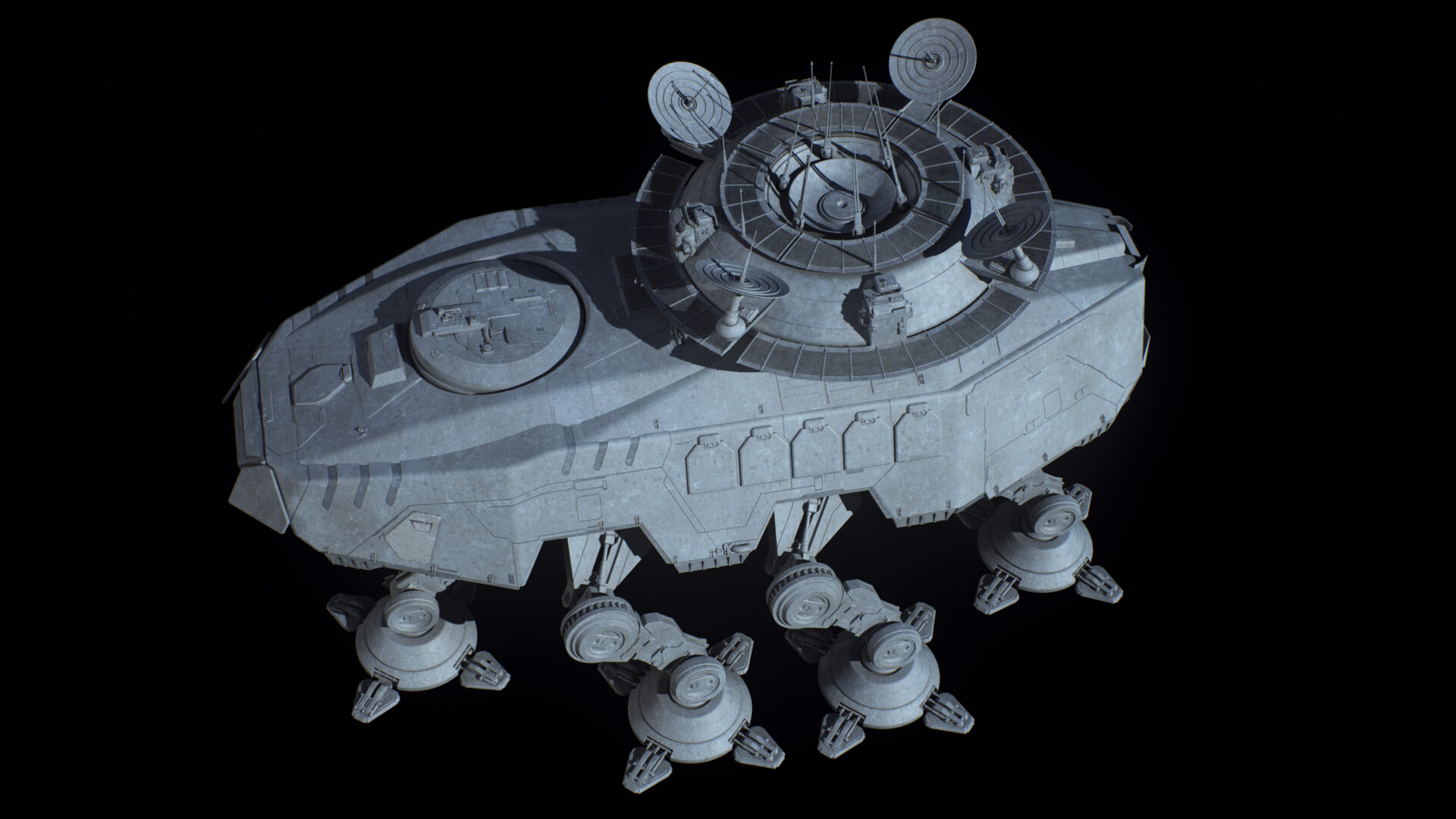 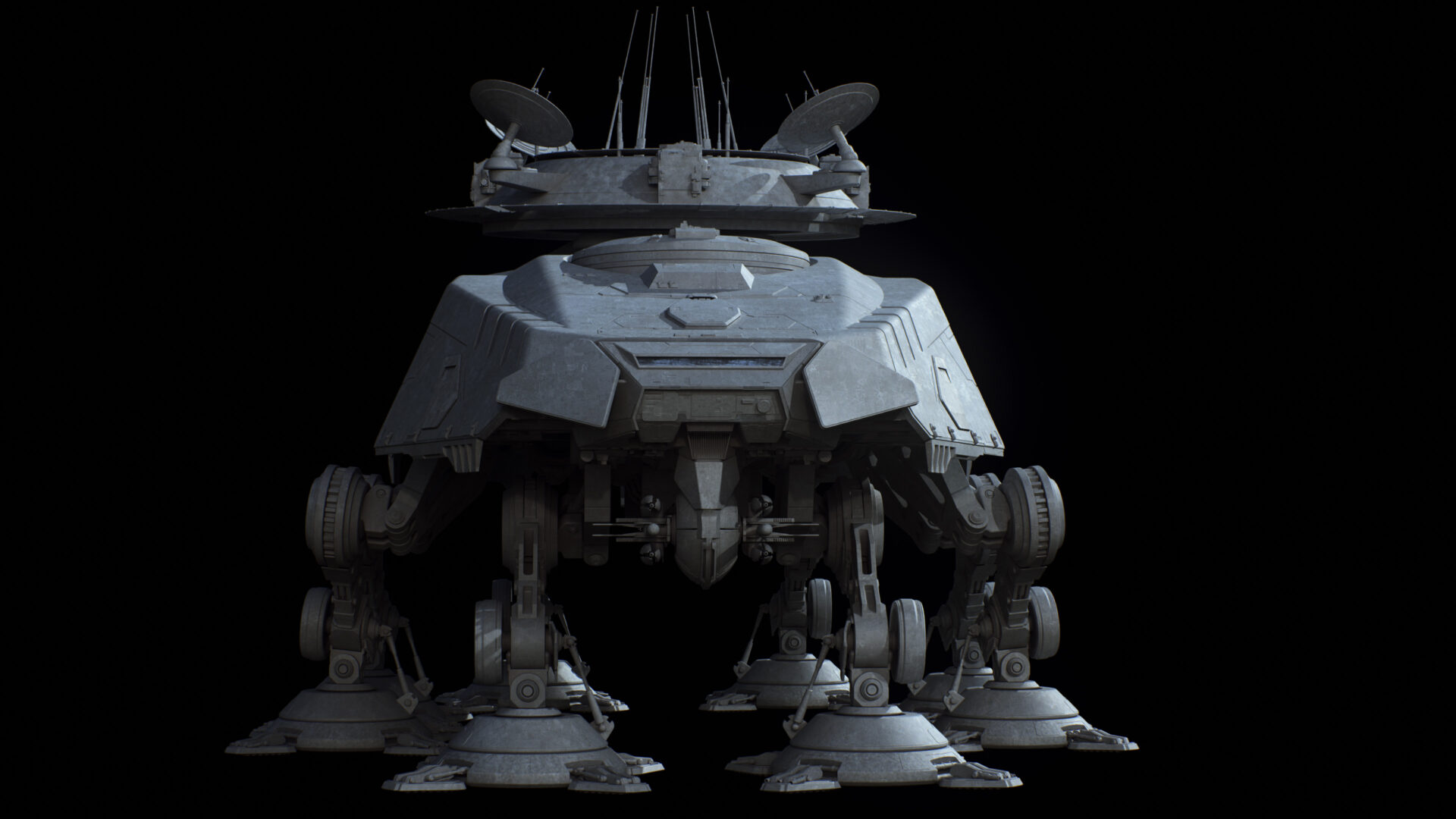 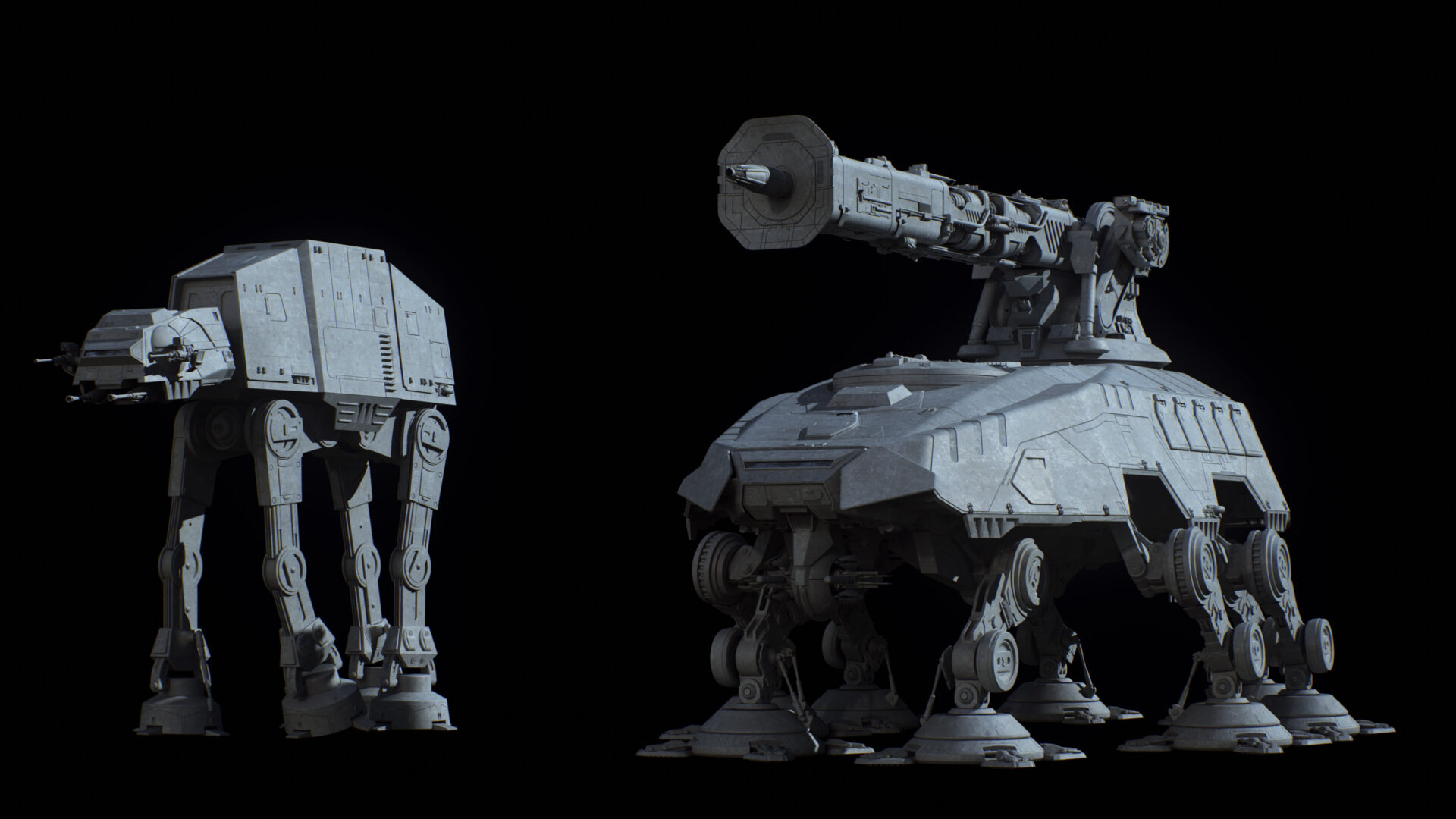 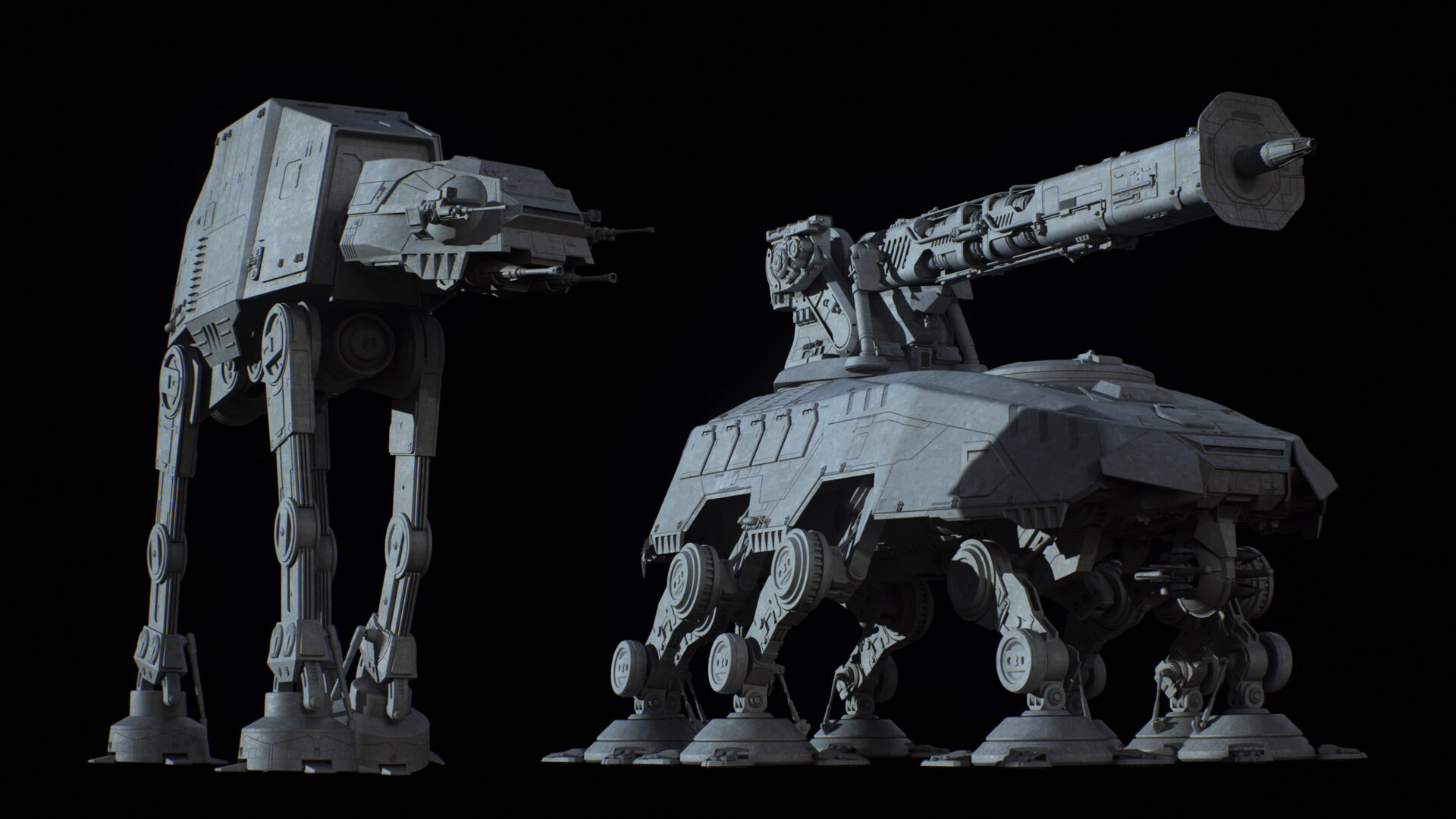 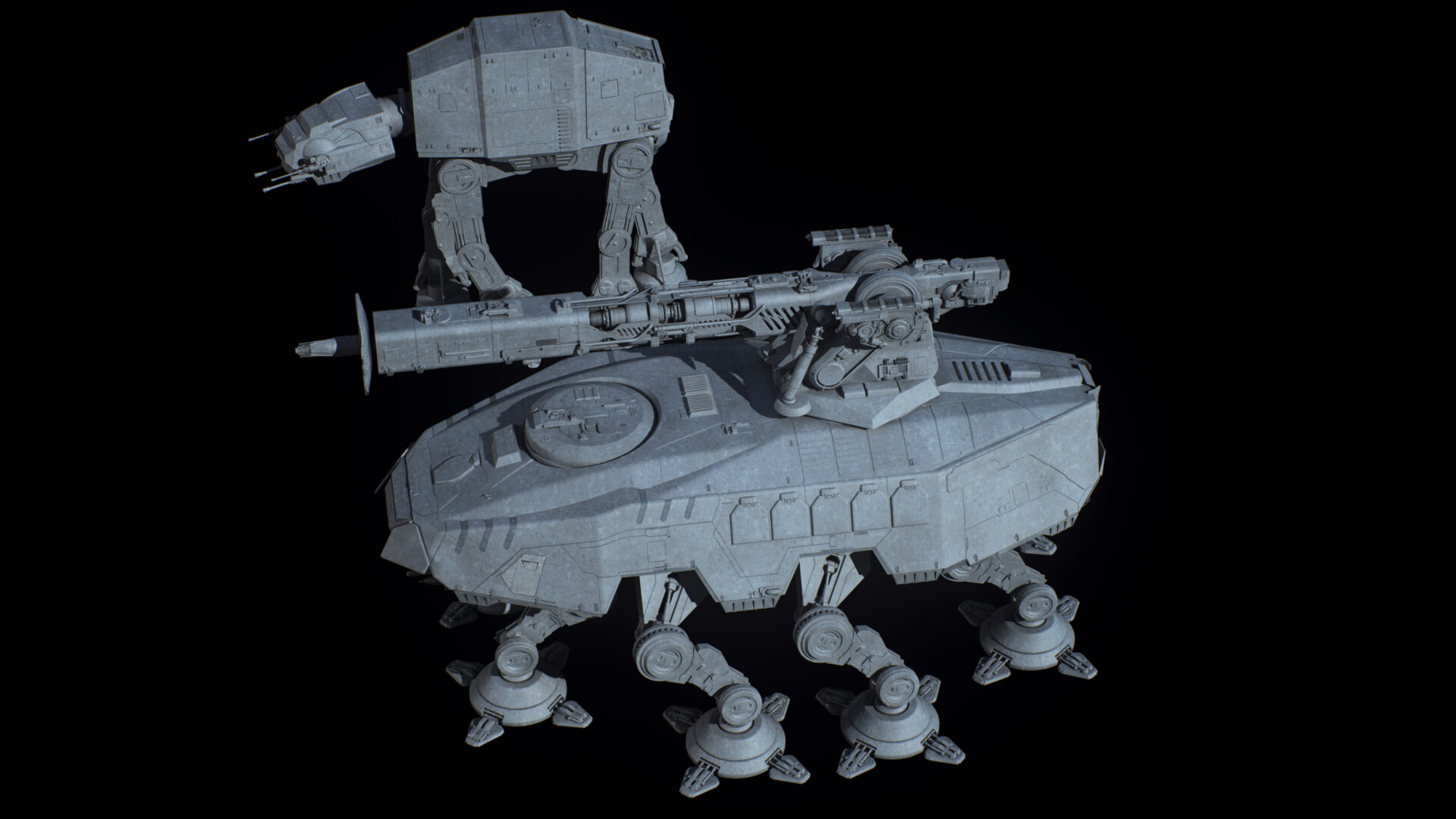 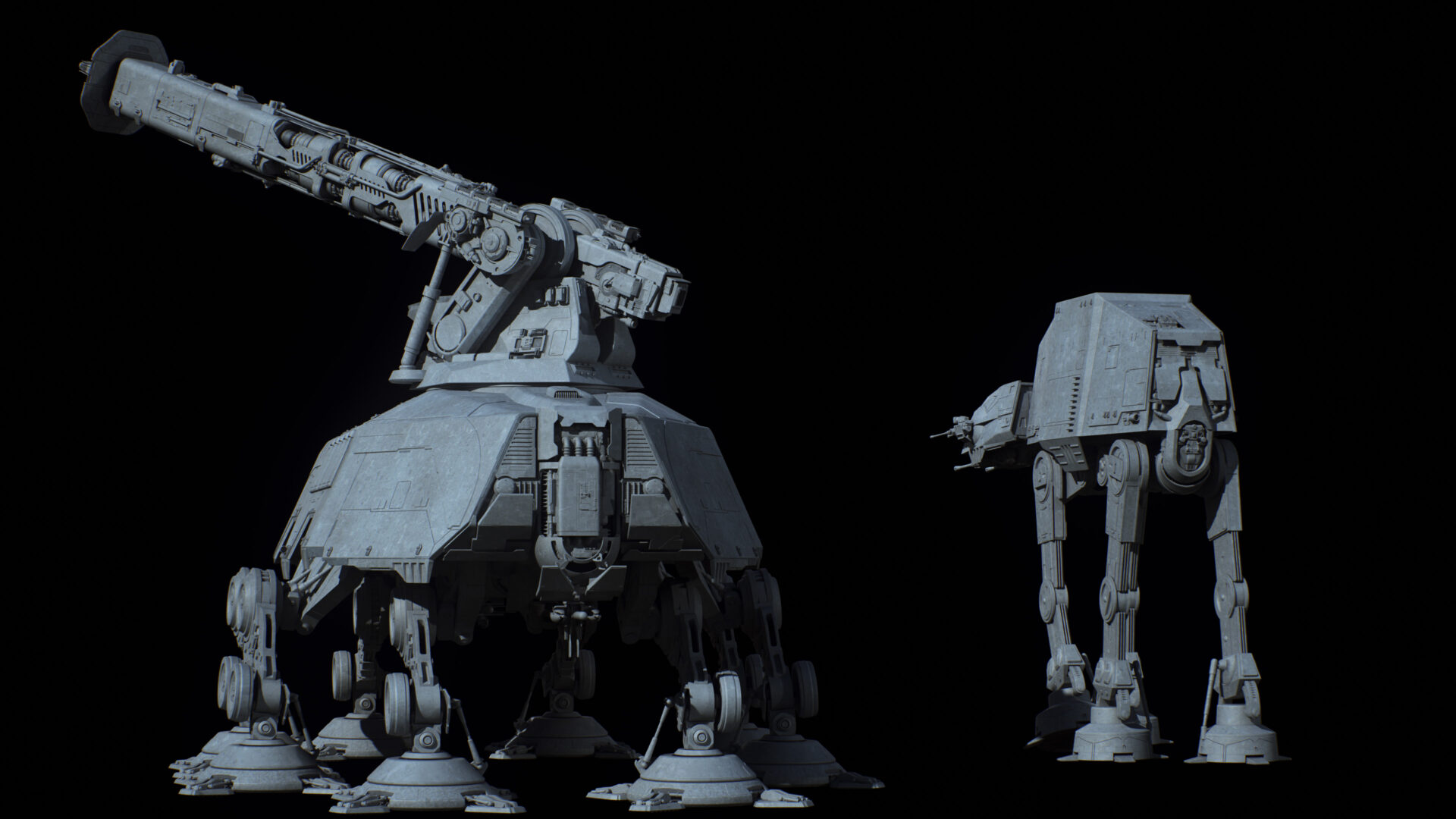 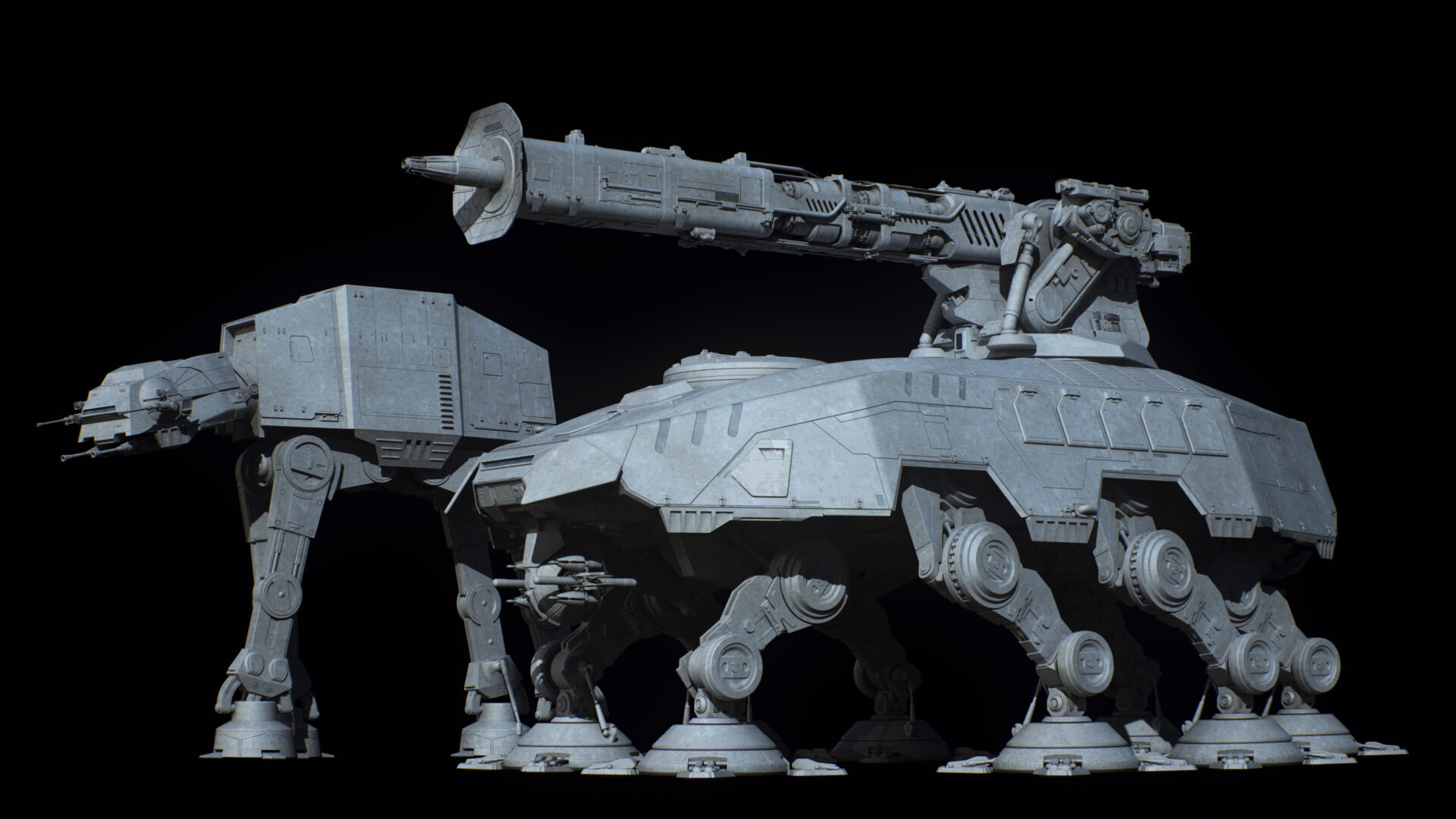 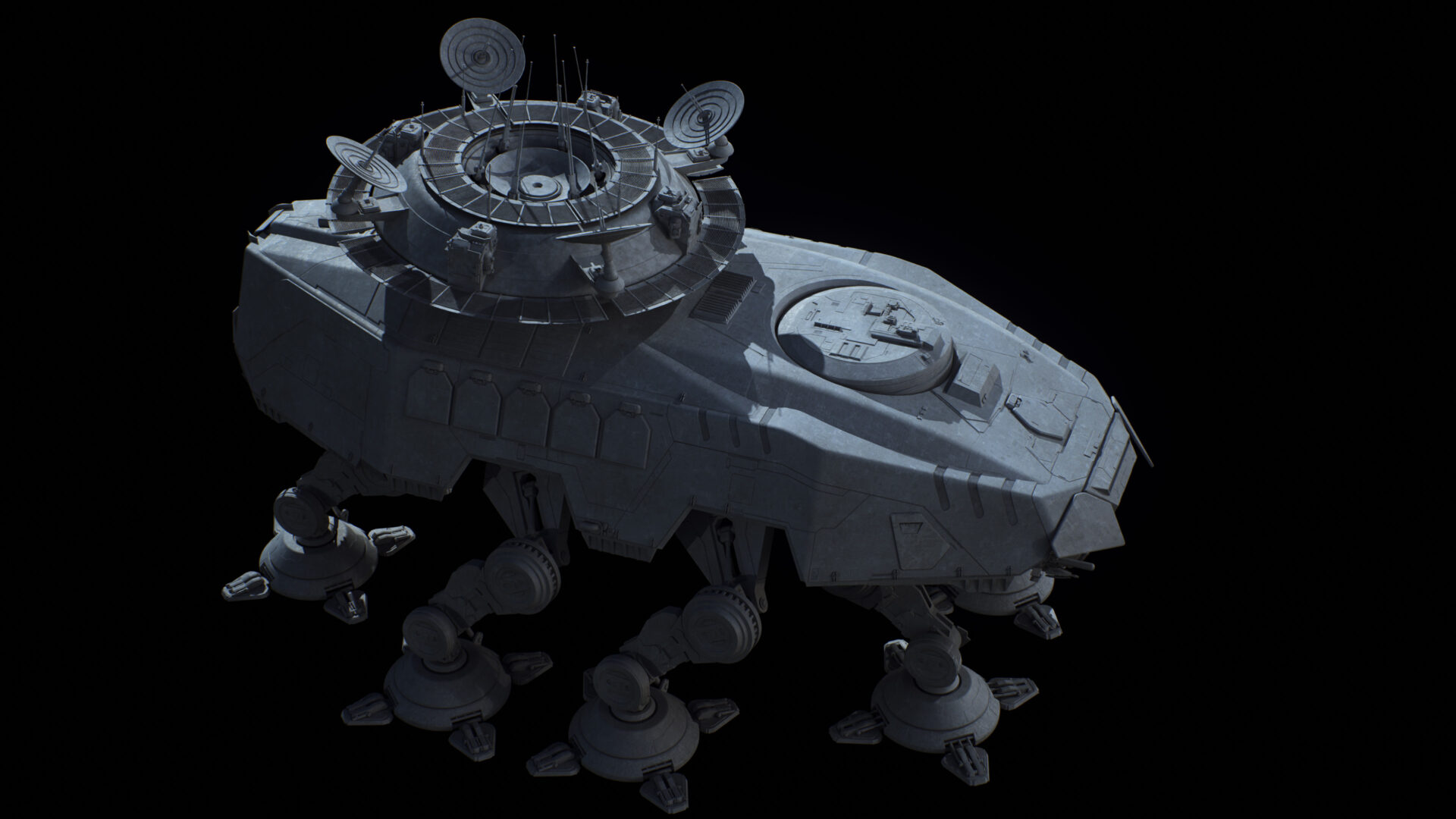 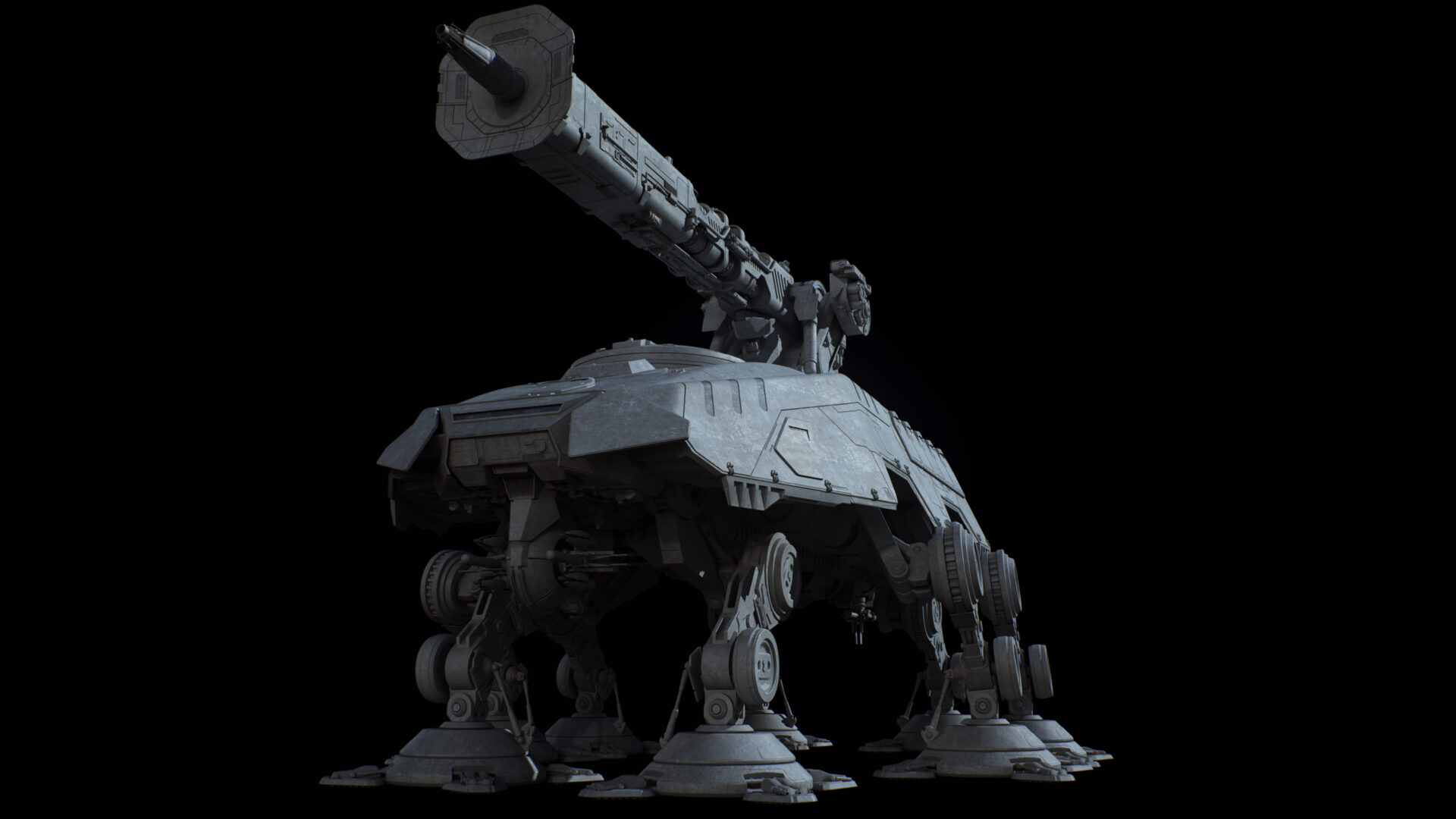 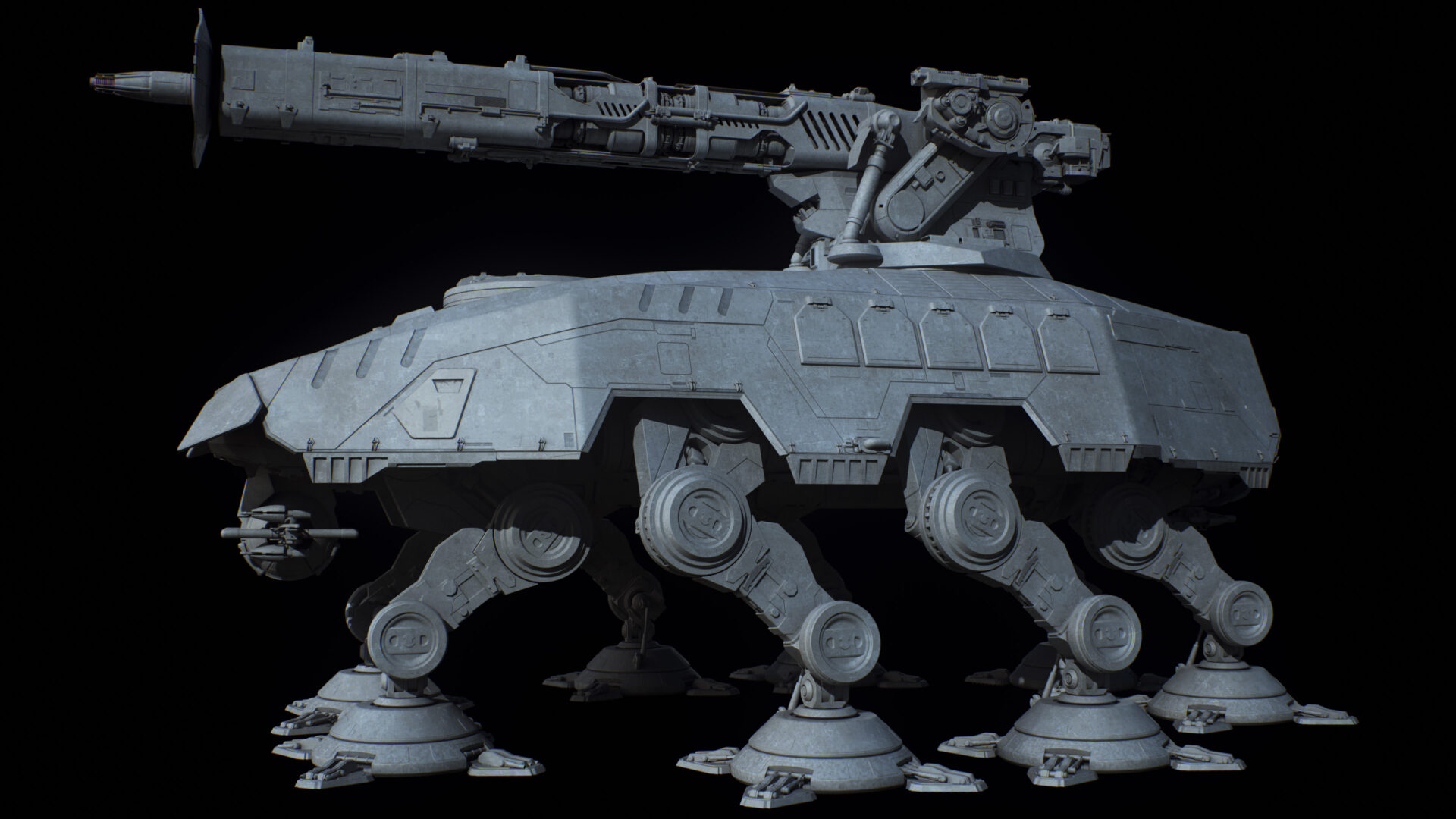 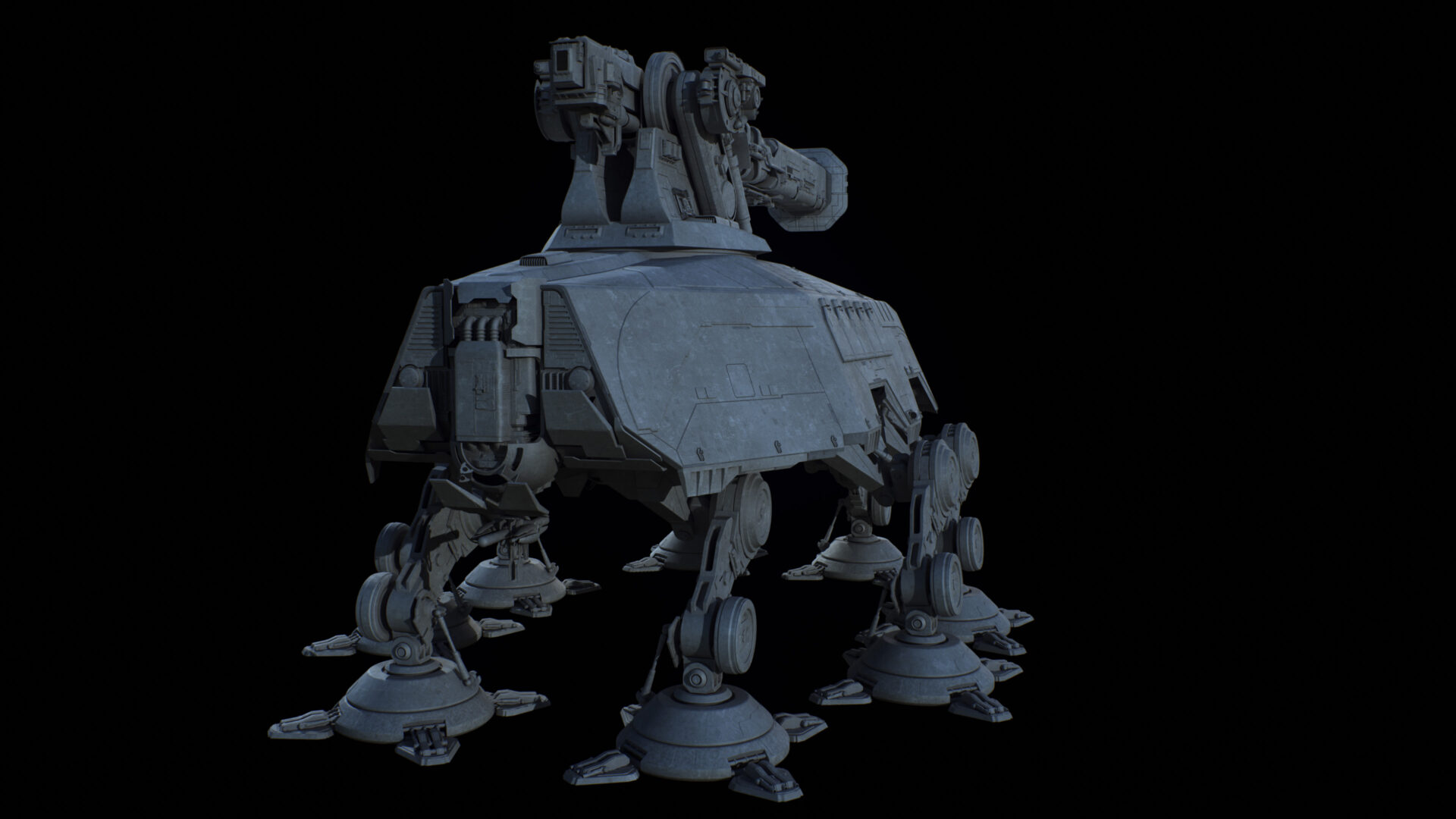 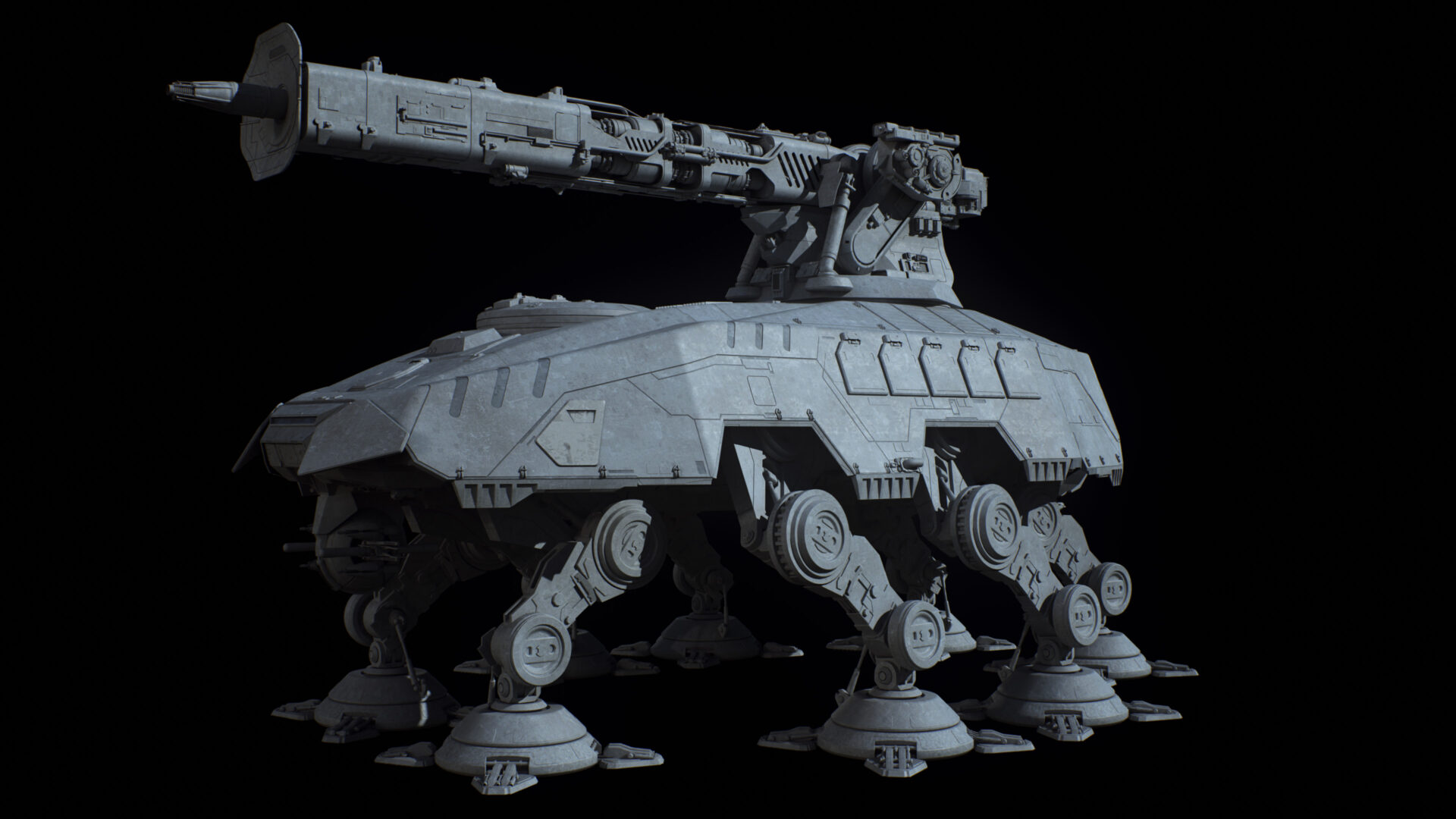 Just thought about what might have happened if the Empire had brought one of these with them to Hoth. 🤔

would it be possible for an Zeta-class Tactical Carryall to carry an AT-HA?

Would any of these modules be used in an indirect fire role?

The cannon in images 6-9 are ballistic artillery cannon.

What is the purpose of the armaments in the 10th picture, and also are there any other options you haven’t go round to designing?

Those are a dual turbolaser and an ion cannon, respectively; this walker can fit any of the turret mounts from the HAVr-A10 Scythe. Additional turret types were discussed on the Discord, but ultimately ran into the “you could, but why would you” problem.

The largest gun attachment looks like it could rip apart a capital ship.

Would one of these fit in a chi-class dropship?

Yes. It’s roughly the same footprint as a HAVw-A6.

Hey Fractal, I have a question for you. How does this walker compare to the SPHA platform in terms of role? Does it replace the SPHA in your previous order of battle, or would it be used to supplement it, say with the SPHA still performing in the anti-capital ship role, with the AT-HA serving as a conventional heavy artillery walker for mechanized formations?

Small question, how is the designation to differentiate between the different types of walkers based on the same chassis?

I love it! Call it the Self-Propelled Heavy Artillery (SPHA) and it could be the big brother of the SPMA-T

The SPHA already exists; it’s the turbolaser walker from Attack of the Clones.

Is this based off the SPMA-T from Empire At War?

What are its stats??

The center mount is more robust and can accommodate larger turret options, as demonstrated by the beam cannon and the theatre shield generator. Adding a third barrel results in a 50% increase in volume of fire without adding more vehicles, which is advantageous in a variety of ways.

Hmmm. I will accept this. But after some thought, I would prefer artillery on the rear mount and then some kind of self-defense weaponry on the foward mount. Fractal’s AAA dual gun mount would be ideal, IMO. AAA is brutal against soft targets and some protection against counter-battery fire would be nice, especially for a slow-going walker.

That’s an option if the walker is operating on its own, but when it’s part of a formation, AAA would be handled by dedicated vehicles like the AT-AA or something.

I mean, if you only have one AT-HA, and no dedicated AA walkers like the AT-AA are available, then sure, having an AA cannon in one socket makes sense, but those instances will be vanishingly rare if they happen at all. A walker like this is supposed to be deployed as part of a formation of dozens or hundreds of walkers, of multiple different designs as befits their specific mission. Putting dedicated AA on smaller, faster platforms like the AT-AA allows for better coverage of the entire formation, and actually provides superior coverage (due to longer engagement window) than would mashing up howitzers and AA on the same platform.

This is amazing. He keeps knocking these imperial walker designs out of the metaphorical ballpark. Each of these is stunning. I love it that Fractal included variations in this design.
well done! Now all we need is some other visual good artist on the net somewhere to give the weird ships like the Vong and the Ssi-Ruuk a proper and official gallery of ships and ground vehicles. Fractal from what I see likes to keep to mechanical designs which are masterfully rendered.

really cool and impressive. if i had one criticism. it would be that the base of the large cannon looks too big and wide. like in some of the shots that show it turned. you can see under it. it makes the cannon look tacked on. is there a way to shrink its size slightly to fit onto the top surface with no bleed over the edge? also. the parts at the base that attach to the hydrolics at the bootm of the front of the cannon could probably use more detail. maybe a big hinge joint? would make it look more sturdy. but this this looks amazing.

Excellent design.
Am I right in thinking that the version with all the dishes is a mobile command post?

Not at all. The one with all the dishes is a shield generator, for projecting a theater bubble shield over the army, like the Gungans did in The Phantom Menace.

For command posts, these walkers are so big that every variant can serve as a quite adequate command post.

finally i was hoping for something like this for a long time. At least since APM.