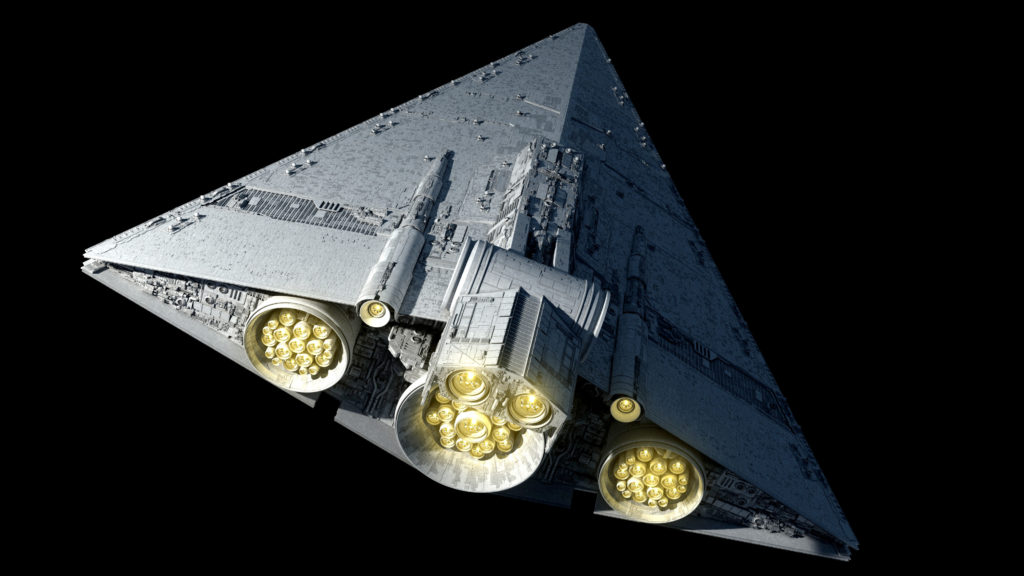 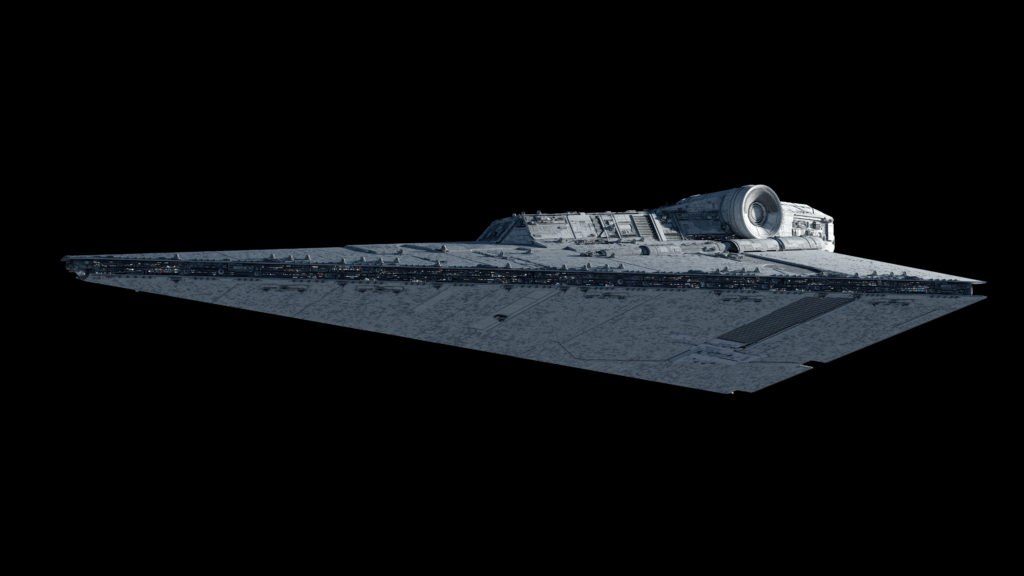 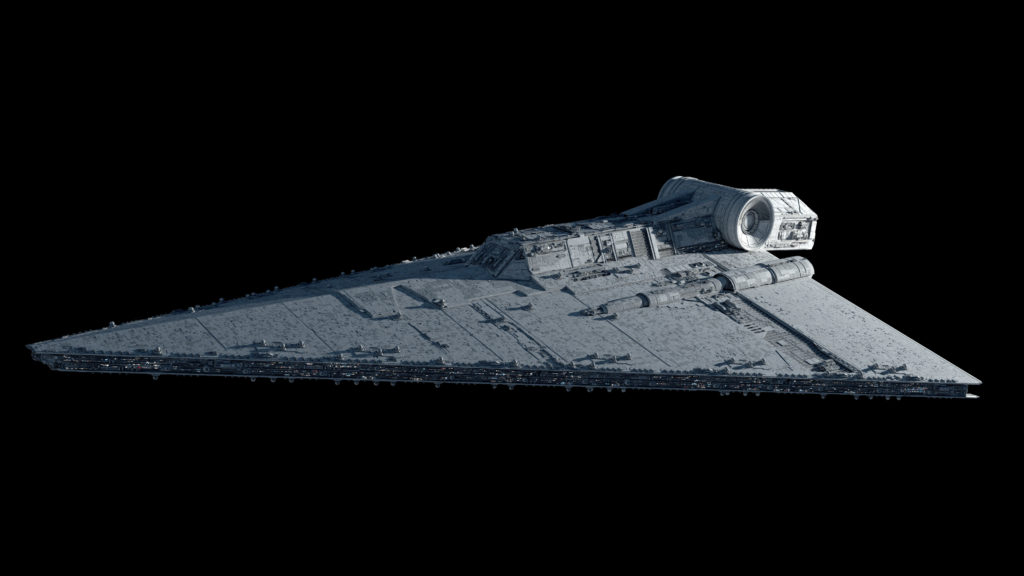 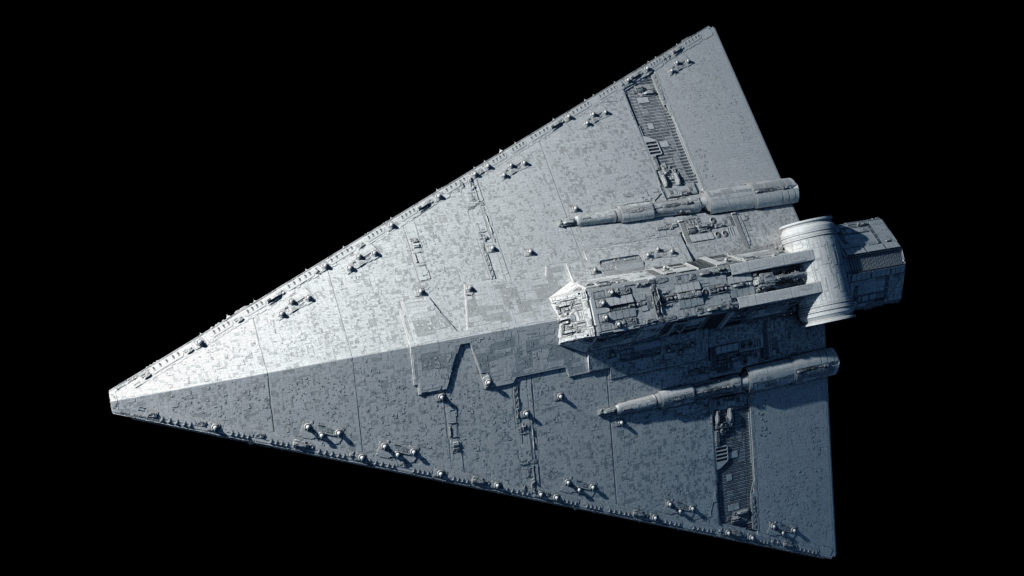 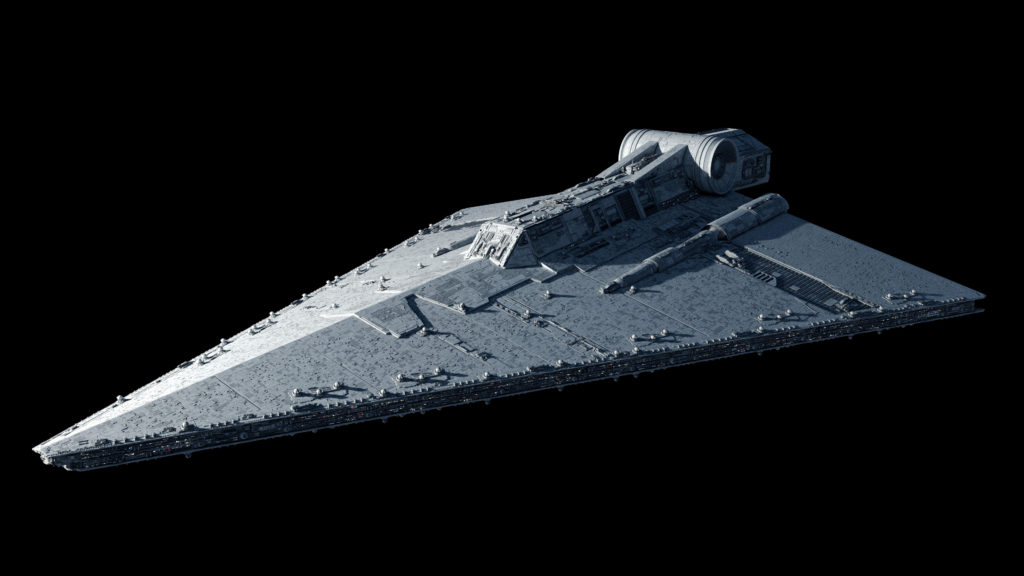 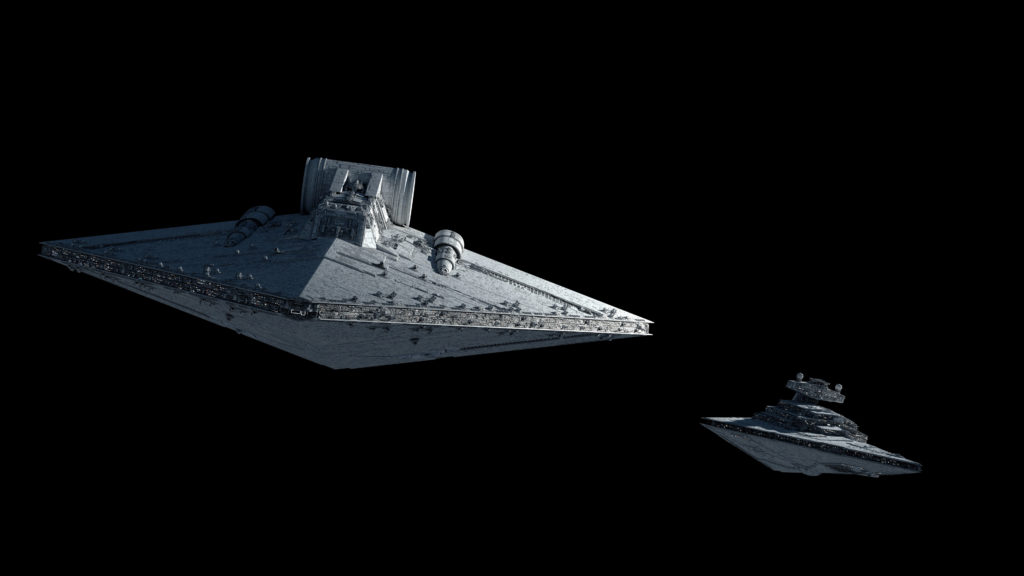 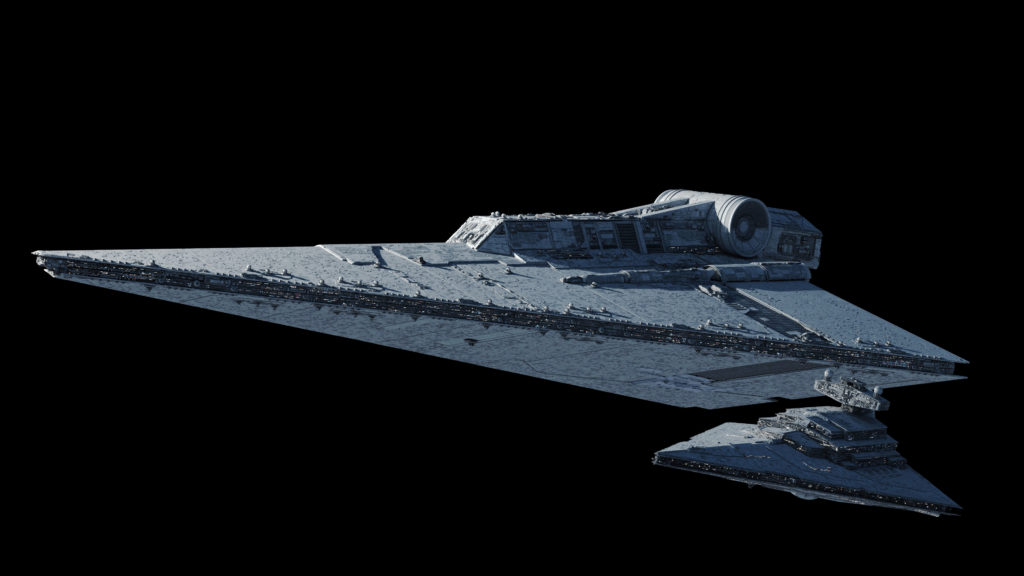 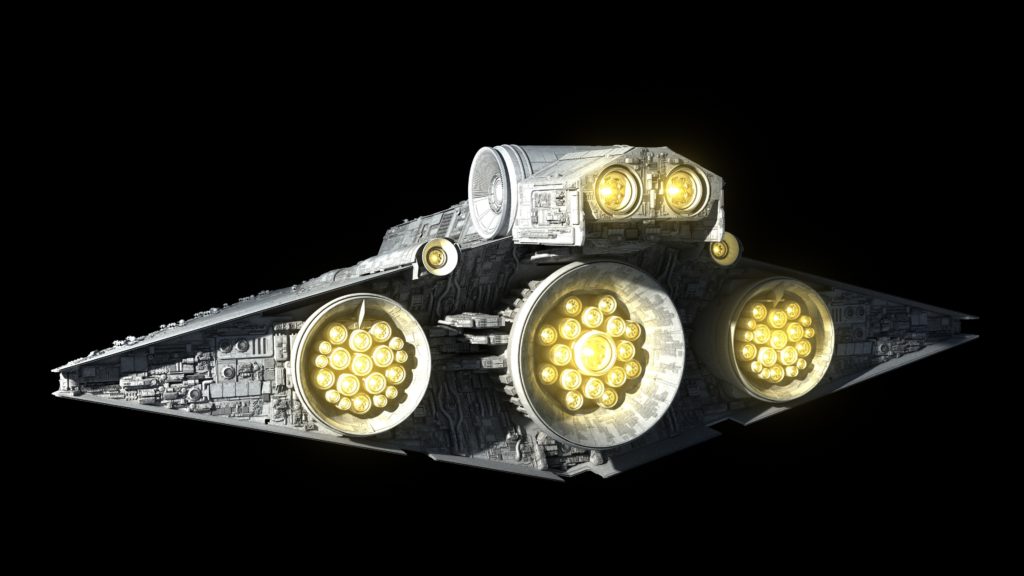 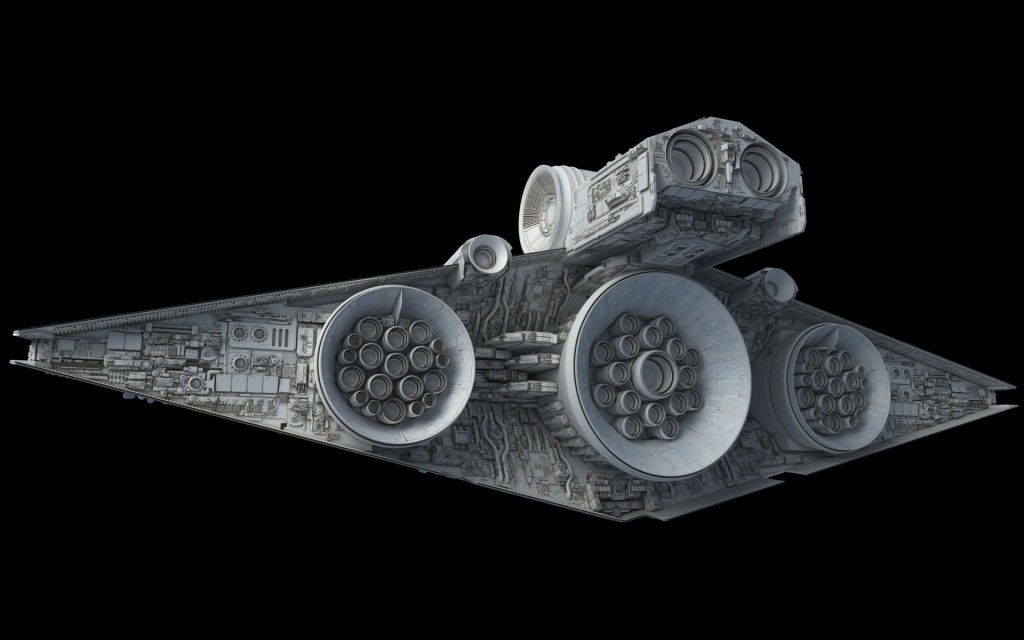 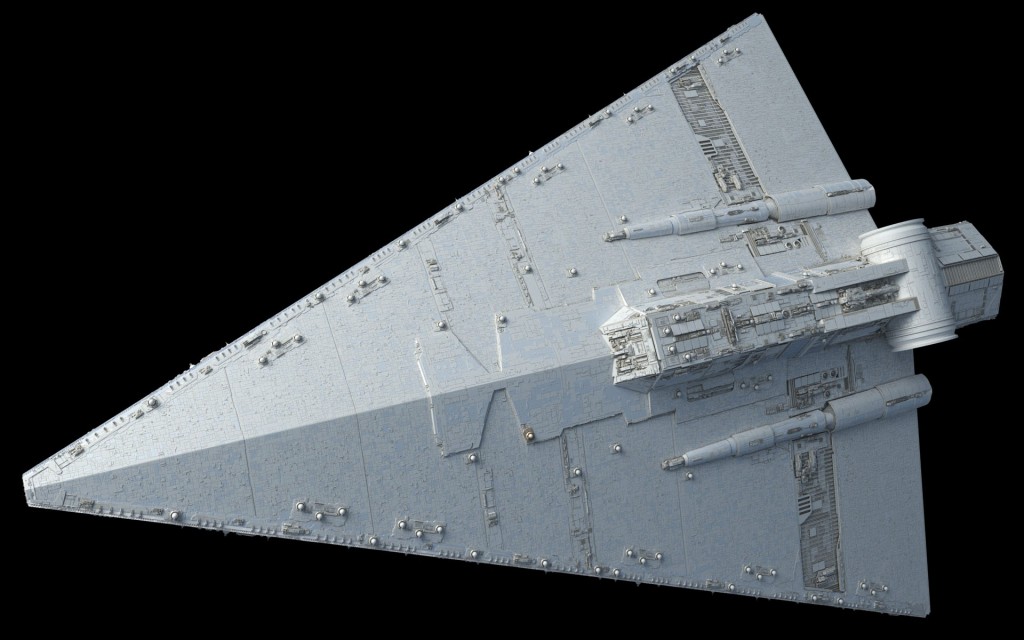 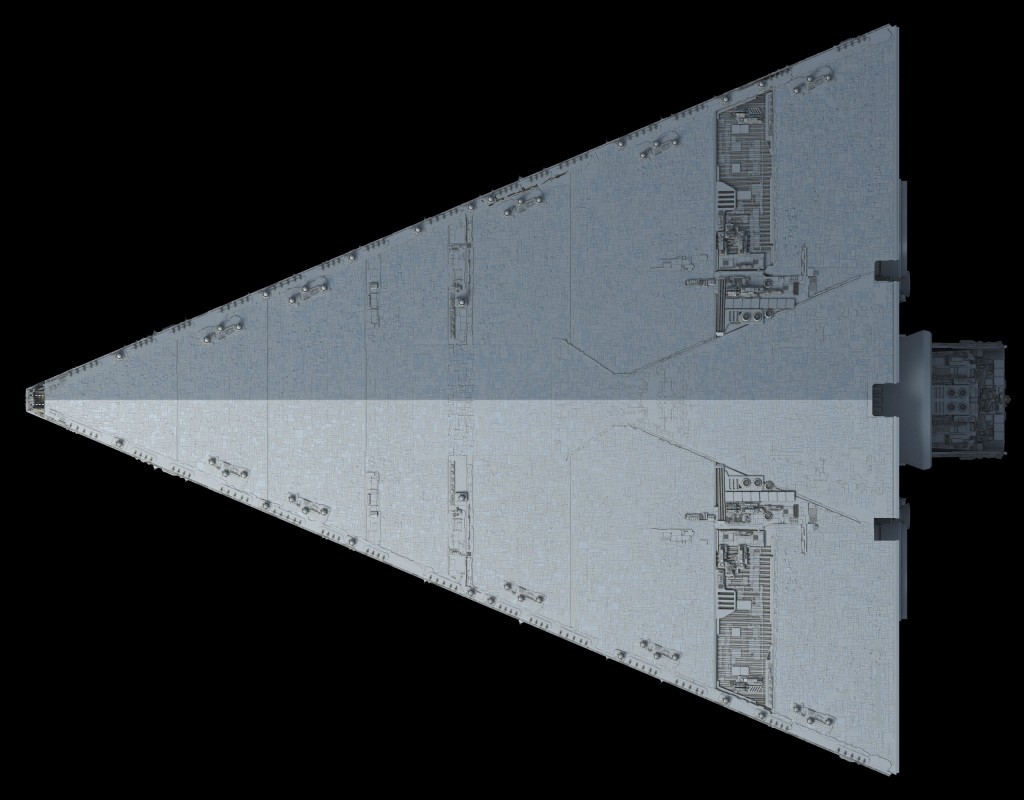 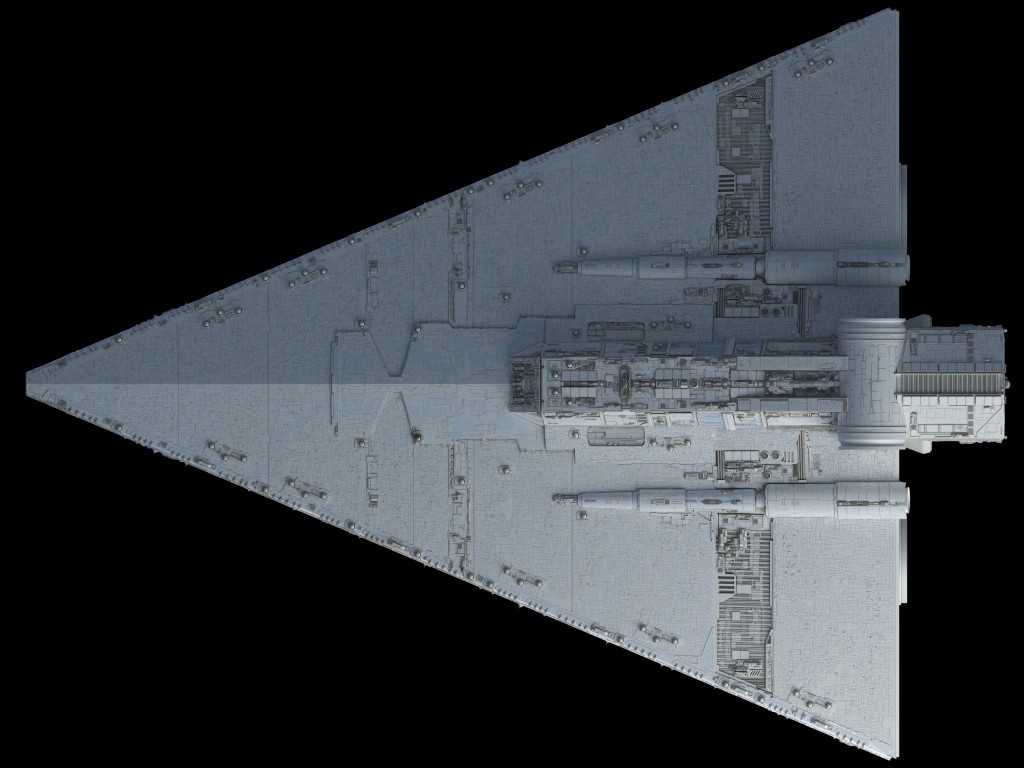 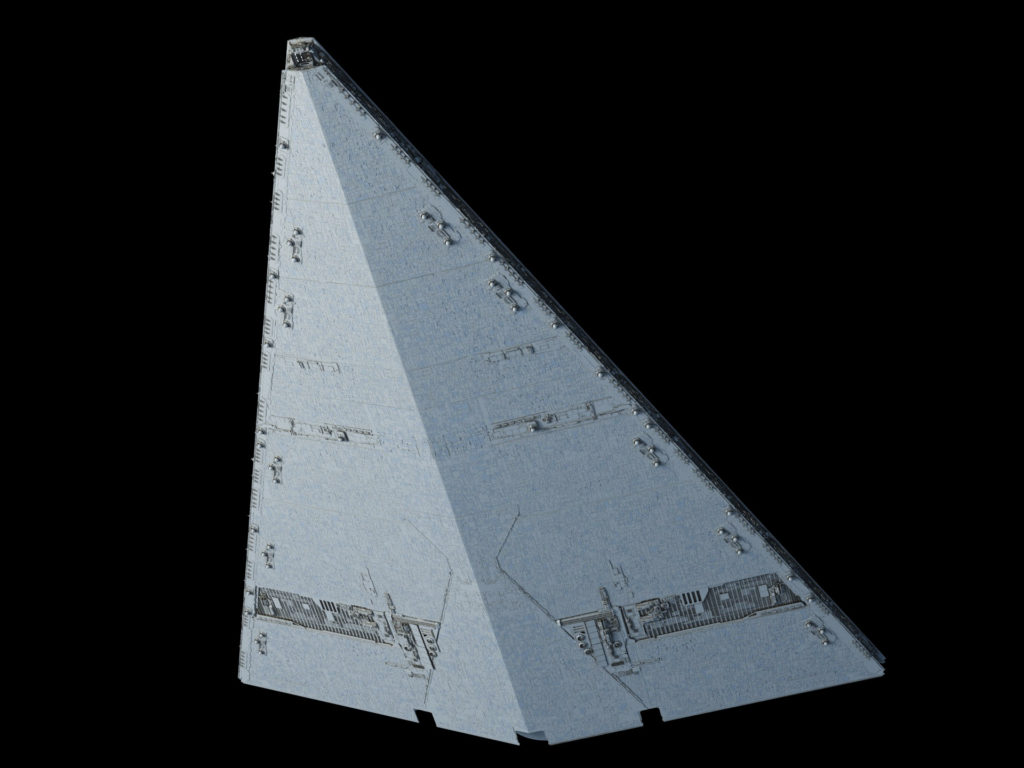 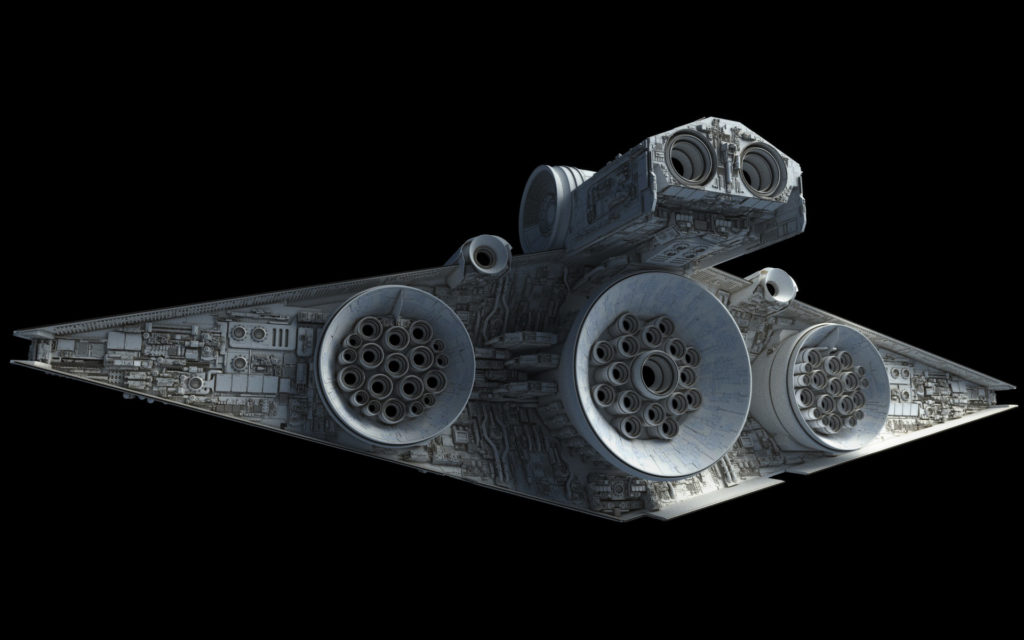 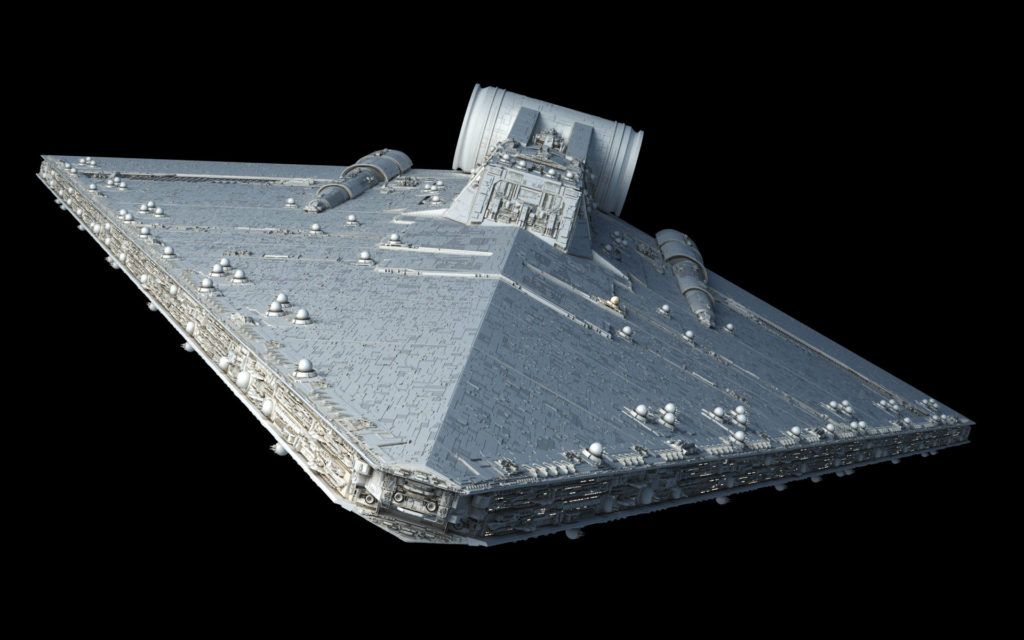 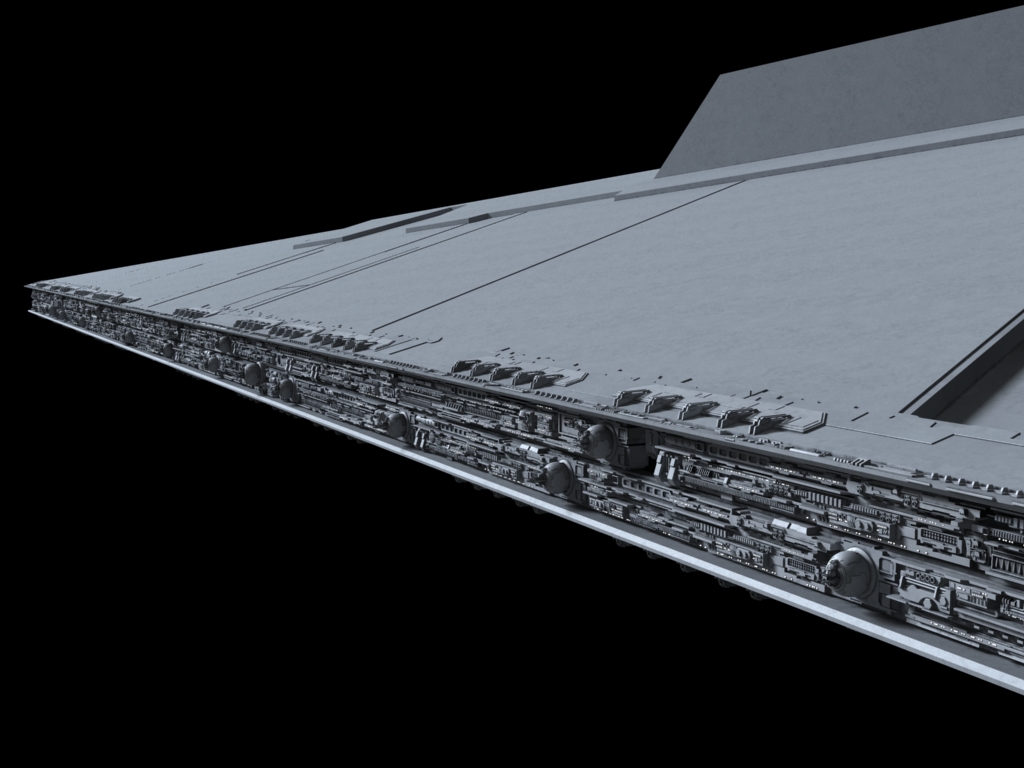 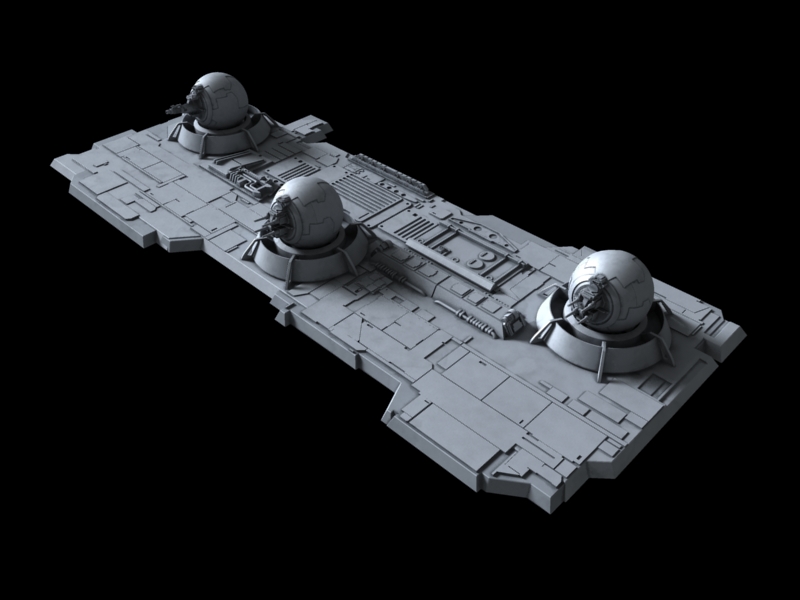 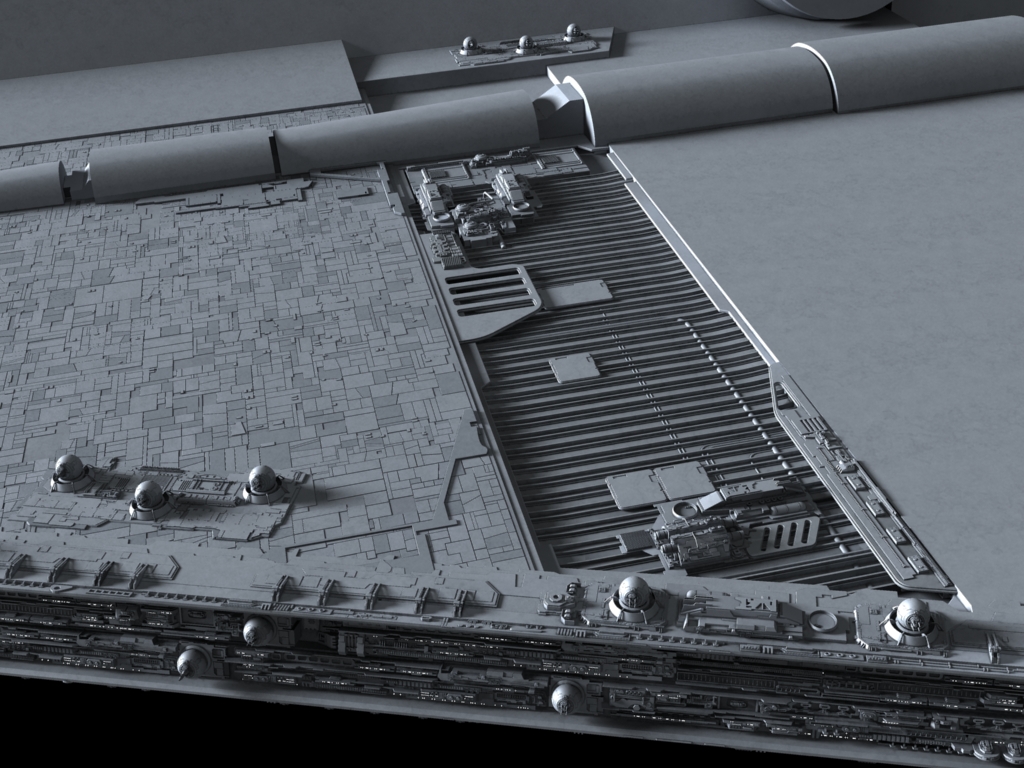 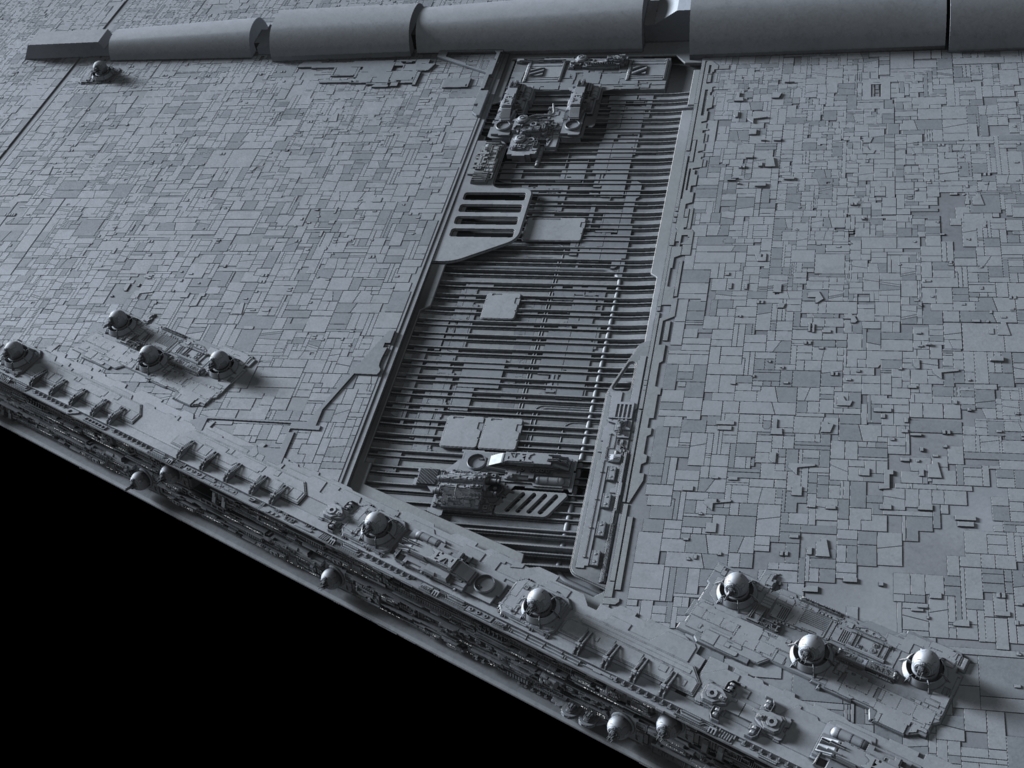 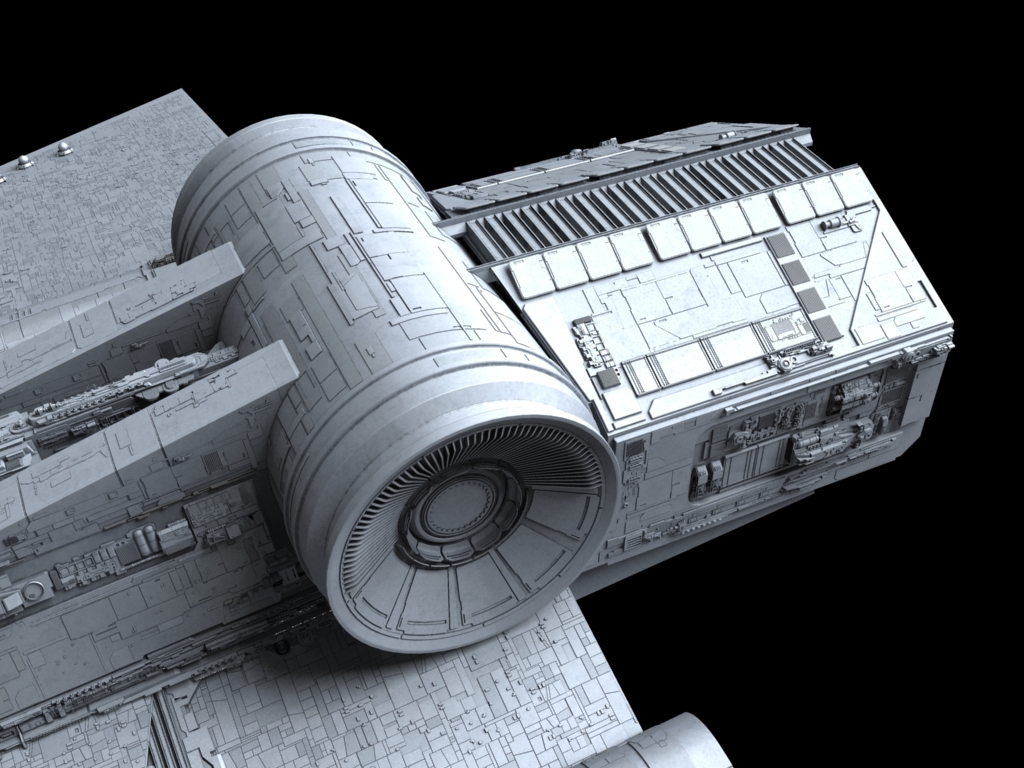 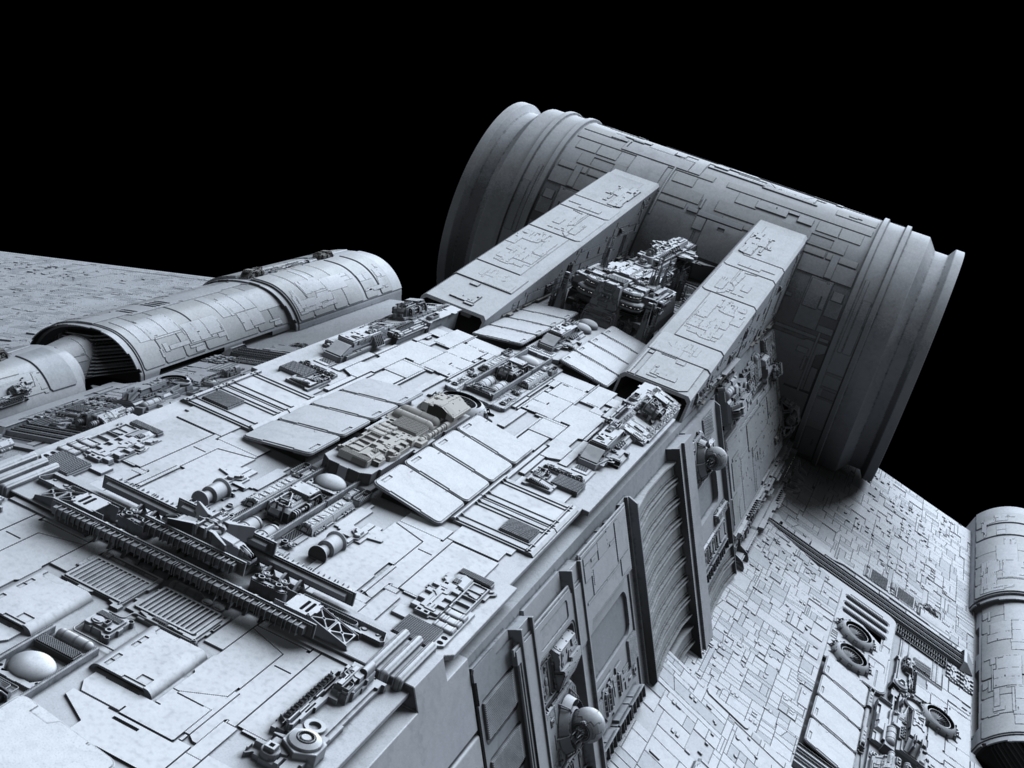 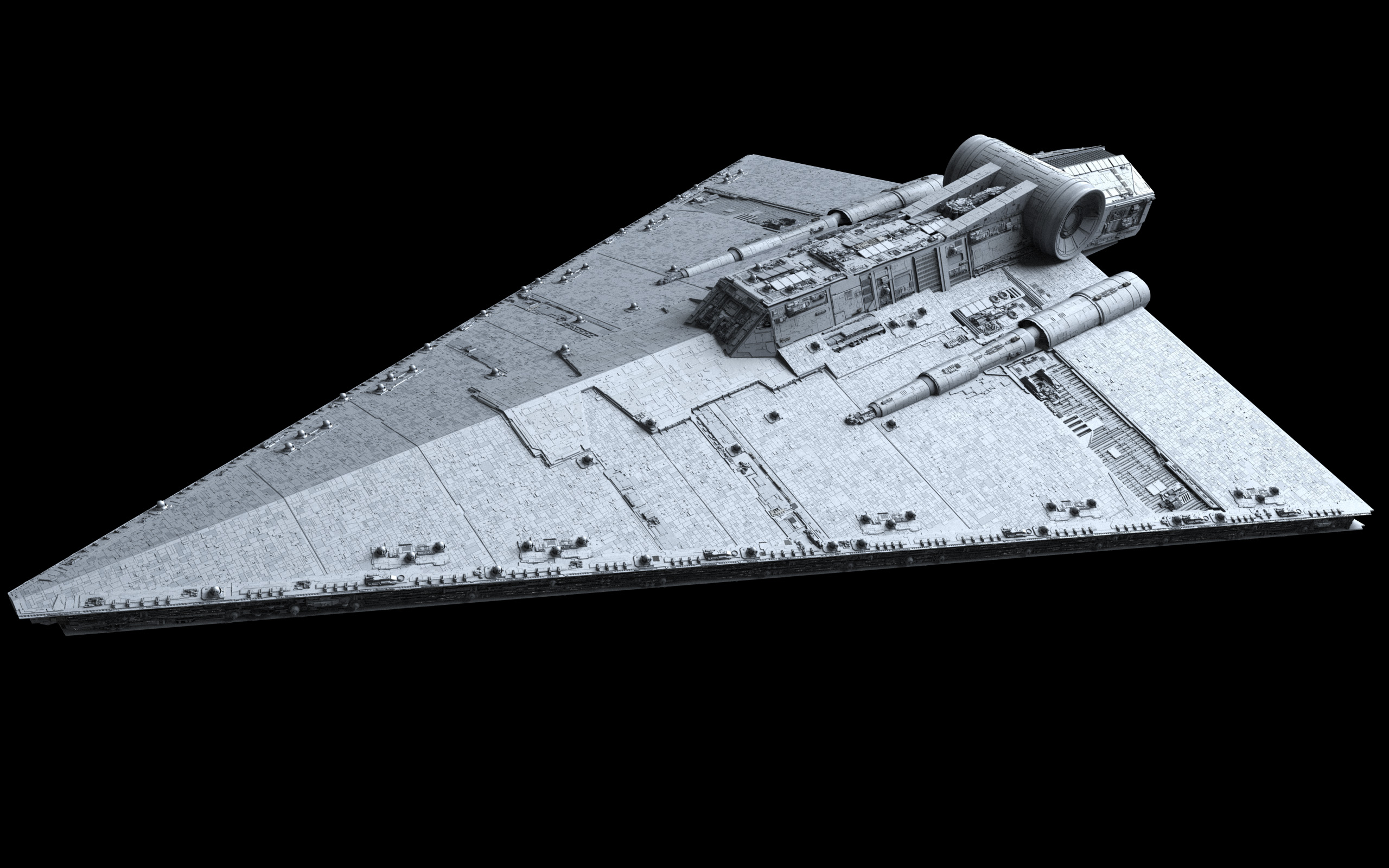 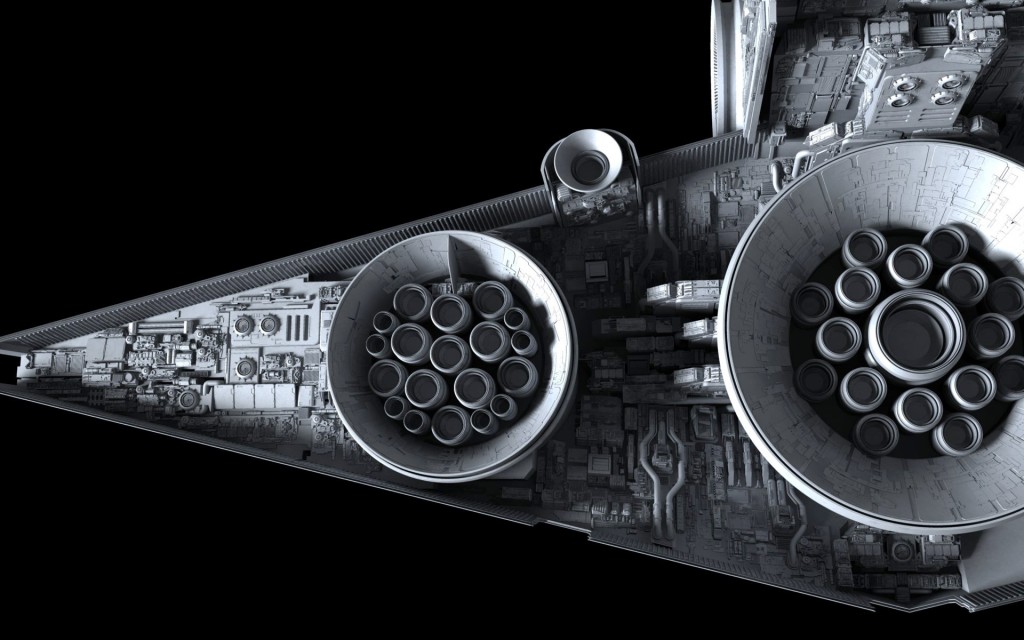 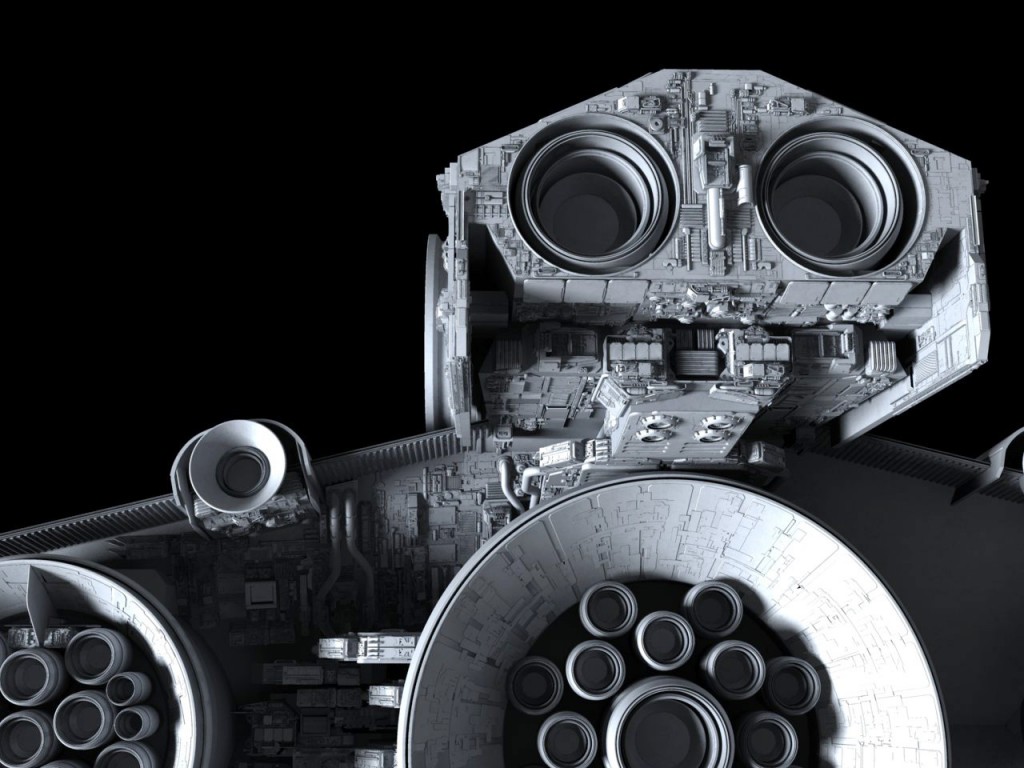 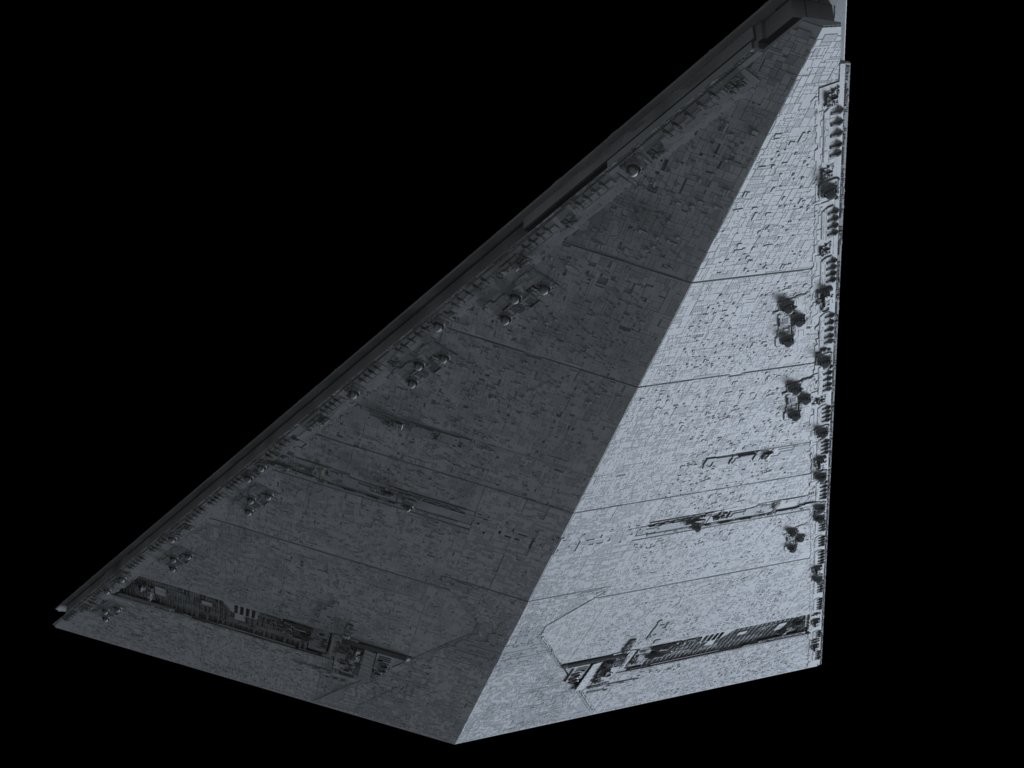 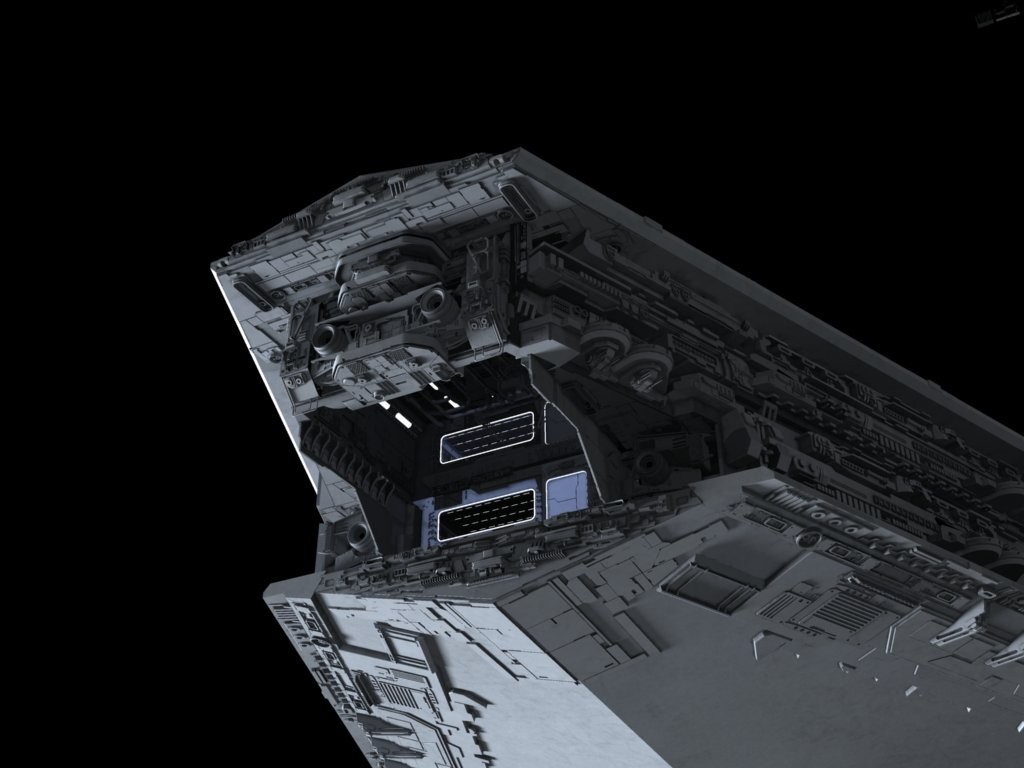 First off I love the design Fractal, but I’m just curious, are those ball turrets quad ion cannons or ball turbo lasers?

Turbolasers, for the most part.

Does the Praetor 2 have many fighter capabilities or not?

It took me MOUNTHS to see the command bridge… if the Empire had more ships like that with such « invisible » bridge, especially the Executor, that would strategicaly be an improvement!
Also, I like the Idea of this ship being filled with Heavy Ion cannons. I think the Praetor II is pretty much the imperial version of the Subjugator-class Heavy Cruiser.

Oh, talking about the Subjugator, I was wondering if you could start making the separatist stuff? I would love to see that!

I made an estimate with the Praetor II with it number of weapons emplacements and the fact that they are all heavy, combined with the reactor size, means that the Praetor is five times as powerful as the ISD II.

The resurgent class is a ridiculously powerful ship, it has over 1500 turbolasers and ion cannons, though there are no other numbers to going off that number alone mean that the resurgent is at least 8.33 times as powerful as an ISD II, although i think that number is higher since these are kyber crystal powered cannons.

Its a bullshit ship made by an abysmal story-telling group. I have a hard time believing its feats. First order, my arse.

What the armament of this ship and why all the HTL turrets ball variant?

I think those are IC’s

What function does that giant barrel shape near the bridge have?

If I recall correctly it’s a docking and cargo transfer structure.

Which of these two ships is the better battlecruiser this ship or the Bellator?

Well I know you said the Praetor class out gun the Bellator by 25% but the latter carry more fighters, it also have missiles tubes on it sides and on the prow and it have 2 reactor domes underneath while the former don’t have any.
So if two of these ships fight each other who would win?

Also why the Praetor don’t have a reactor dome?

All internal, which is better protection, but requires a bigger hull and more armor for the bigger hull. Tradeoffs.

Ok then so i as said who would win in the fight as the better battlecruiser the Praetor or the Bellator?

Probably Bellator, but not all the time. The difference is not so decisive that training and luck can’t tip it over.

So they kinda similar of what they do or maybe the Preator have greater firepower (In turbolasers) and armor but the Bellator has speed and missiles (if it make any different or not) right? because i’m finding it hard to see what their different purposes between each other.

Different manufacturers, for one (I like to think Praetor is a CEC product, or at least a collaborative CEC/KDY or Rendilli/KDY product). Bellator has better acceleration, so there’s already a big difference. Bellator can carry fighters and troops (at least much more than a Praetor even if not all that impressive numbers for a hull that size). It’s therefore more multi-role than a Praetor.

Ok I change my mind about this so now I think the Praetor is a Light Battleship while the Bellator is a Heavy Battlecruiser.

It depends on what task you have in mind for the ship.

Wow, what a monster! The wider angle really beefs up the mass, making for a very intimidating design!

The lack of a bridge tower is really offsetting, wonder why the Empire went through with it.

The Empire would have benefited largely from getting rid of their exposed bridges. A Advanced/Standard Proton Torpedo or Proton Bomb/Rocket barrage would spell doom for such a critical system.

Great work! Interesting choice to go entirely with ball turrets for the main armament. Did you ever work out the final weapon load for this beast?

Then how much firepower for the 8km variant than the bellator?

There’s no 8km variant. A 6.4km variant would be roughly comparable to Bellator.

exactly there is one on wookiepedia which said on star wars age of rebellion which said to be nearly five times the lenght of the ISD. http://starwars.wikia.com/wiki/Praetor_Mark_II-class_battlecruiser#cite_note-AOR-3 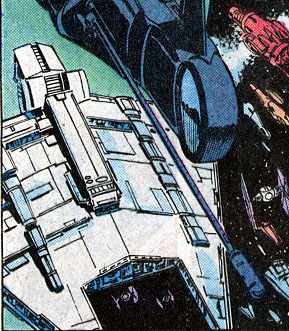 Any plans to do the carrier variant?

No. The link i posted above shows a ship from the Classic Star Wars comics which is very similar to the Praetor, but with the split bow from the Impellor.

Man if Fractal did that just imagined how many hangers there will be!

Anyhow, slick job rendering this Marvel refugee’s sundry curious components. That gargantuan subwoofer module (bridge?) has me wondering whether this was a Corellian design, or subcontracted their way; plus, those dorsal/ventral grilles running perpendicular to the superstructure are something of a head-scratcher. Heat sinks?

That massive cylinder is the reactor, I believe. As for the resurgent-class, I’ve got a ton of complaints about Episode 7, and that’s one. It’s 2.9 KM long, but still has 8 major turrets on the frontal side (barely visible), and can carry a massive, astounding, shocking amount of strikecraft – a mighty 144. I mean, seriously? A 600 meter heavy cruiser can carry 72, but a 3-kilometer carrier-battleship can only carry 144? The ImpStars only carried 72 because they were multipurpose – they had to escort, engage in fleet battles, invade planets, and carry starfighters. But the Resurgents were… Read more »

Wookiepedia’s Legends/EU article for Ex cites roughly 4,000 turbos (plus a lesser number of ions, launchers & lasers), but yeah: no personal issue with the new fleet standby outbulking Impstars, but the only way I’m rolling with X-thousand guns on a Resurgent is if that total includes all the mediums, ions, missile turrets & point-defense snub-zappers. Which, upon third viewing of TFA, were actually at least *trying* to hit that hijacked TIE before the missile connected, so points for that much. And agreed that if you’re basically gonna convert 80% of the bow into awkward hangar space, there oughta be… Read more »

Yeah i don’t really like that ship as well it was suppose to have 1.5k turbolasers/ioncannons but i can’t really see anyone of those apart from those 8 main turbolasers like the one on the ISD & IISD which made it hard to believe it and even if they did show all of it they would possibly look very messy and cluttered with no room between each other also these turbolasers was powered by kyber crystals which i’m not sure was a good or bad idea to do, the tractor beam is at the bow instead of the hangers which… Read more »

By away Fractal what do you think of the First Order’s idea of using kyber crystals to make the Resurgent class star battlecruiser turbolasers more powerful than any normal turbolasers?

Well then and why do you think it is horseshit? It is because they don’t go together or the kyber crystals will be too much for the turbolasers or vice versa? Also by away if you think that is fan-fiction well: http://starwars.wikia.com/wiki/Resurgent-class_Battlecruiser at the Offensive and defensive systems part it mention this “Powerful turbolaser batteries allowed for overloading enemy shields and punching through thick armor, along with orbital bombardments capable of reducing planetary surfaces to molten slag. Upgraded from Imperial-era turbolasers, the Resurgent-class delivered more firepower and had a faster recharge rate. Stemming from kyber focusing crystals harvested from a… Read more »

I bloody well know that it is in the new fluff. I also think that it is awful writing, of the type usually found in awful fanfiction, hence my comment. Khyber crystals just sounds like TV serial plot-of-the-week nonsense. It’s objectionable because stuff like that builds threat by fiat, going against existing world building. It’d be like if I suddenly started putting turreted superlasers on my ships and saying they now outgun Death Stars because screw you. Incremental engineering improvement would be in line with the setting, but some crap like tripling firepower per barrel is really stupid. Technology looks… Read more »

Whoa that is one hell of the rant you did! It really made me think about this for a while so here my thoughts on it. 1.Yeah the kyber crystals do become boring when use too much. So do you think is best to keep it exclusive to light sabers and the death star’s super laser or do you think kyber crystals as a whole is stupid? 2.From the look of it’s technology they got yeah i agreed it look like it at is absolute peak and the Starkiller base being justify especially when it is a freaking star system… Read more »

Anyway back to the resurgent what do you think of this idea of putting tie fighters on the hanger’s wall like this:

I thought the hangar looked fine. The Resurgent as a design looks fine too, but it’s not immediately iconic like an ISD.

Right and i know you don’t like the placement of their tractor beam at the bow of the ship instead of placing it near the hangers but what do you think of their command ship replacing downwards to make it harder and not exposed for the enemy too see?

By away fractal how much is more powerful do you think is the Resurgent class when compared to the Imperial class star destroyer?

For the of 144 fighters, they simply made a basic calcul: a resurgent is almost 2 times as long as a ISD, so it has 2 time the fighter capacity, right ? obviously it isn’t because the carrying capacity scale by volume, not size, so it should have around 8 time as much TIEs as a standard SD (or 576 ships, part bomber/interceptor), and even more since it is also supposed to be carrier. And for the hollowed bow of the resurgent, I think it’s actually a pretty bad idea. If you remember, what killed the executor was that some… Read more »