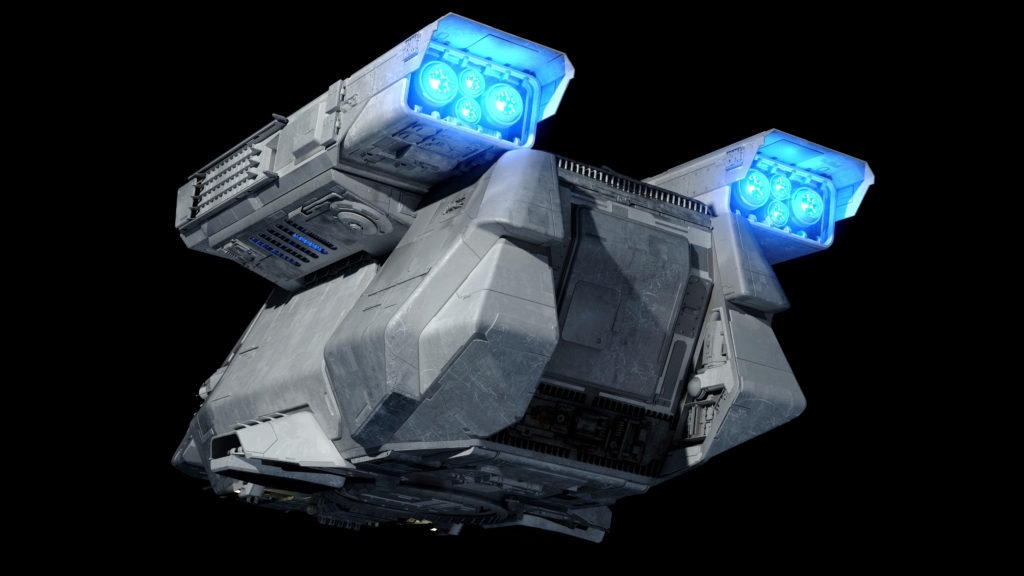 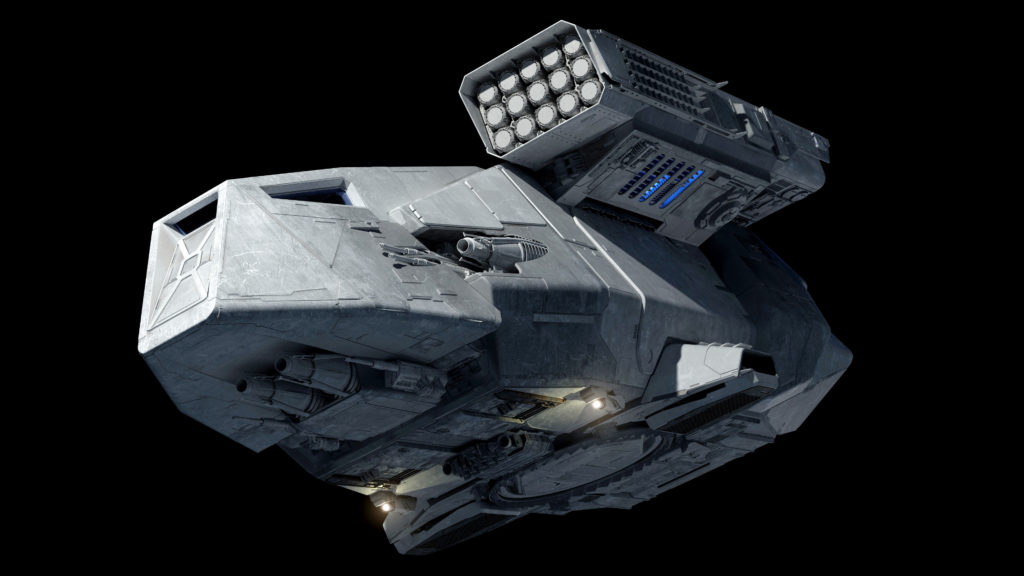 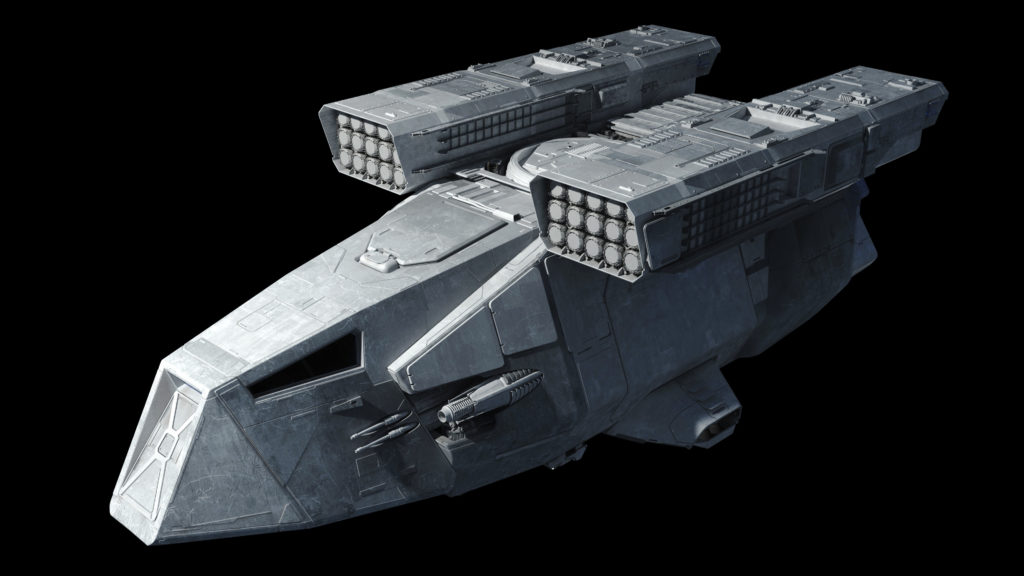 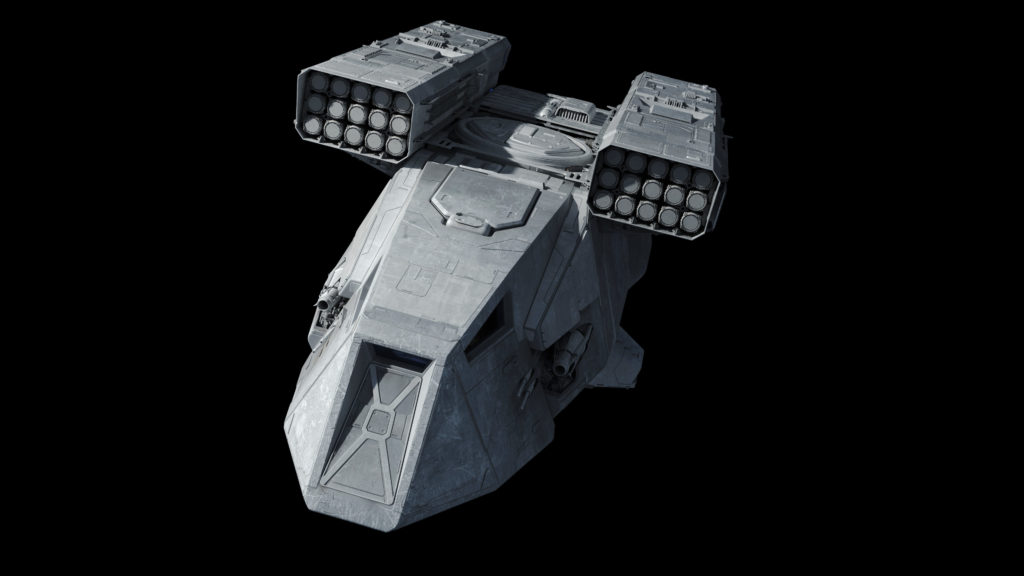 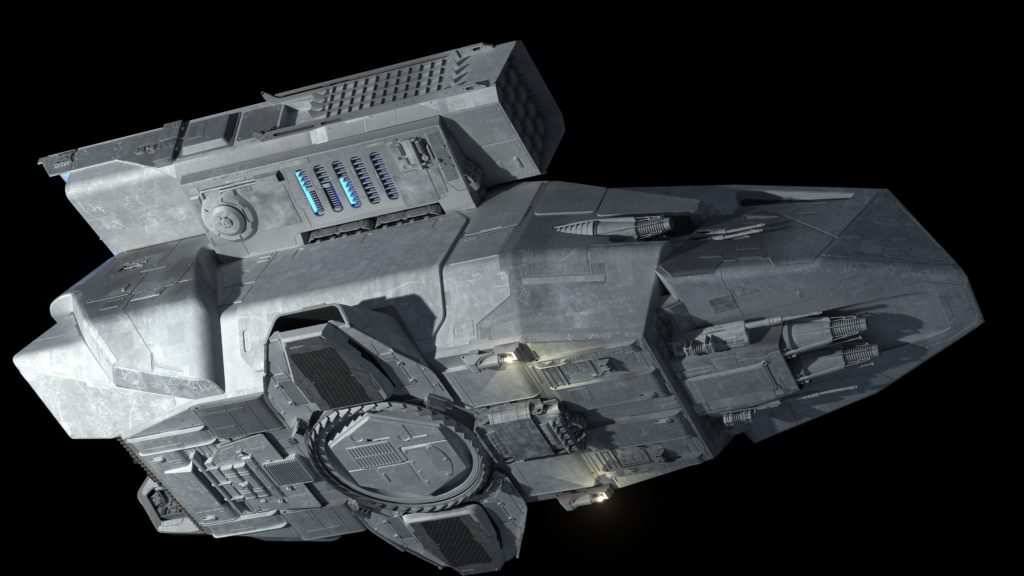 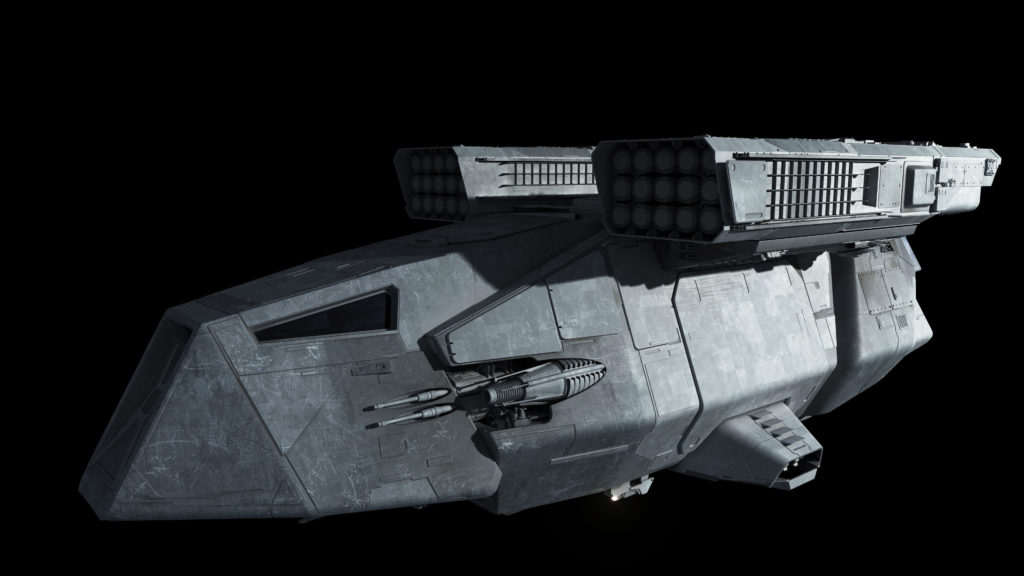 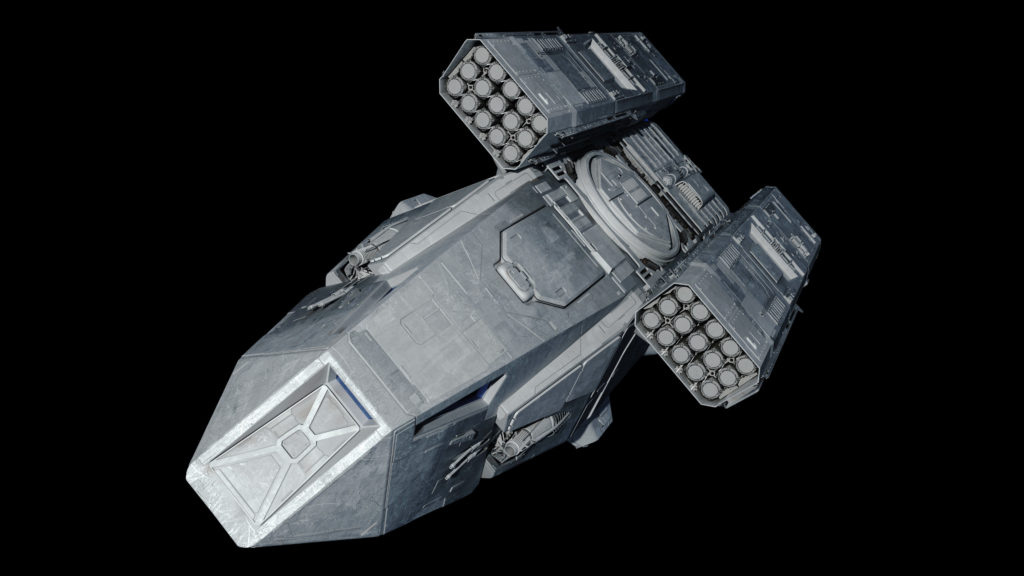 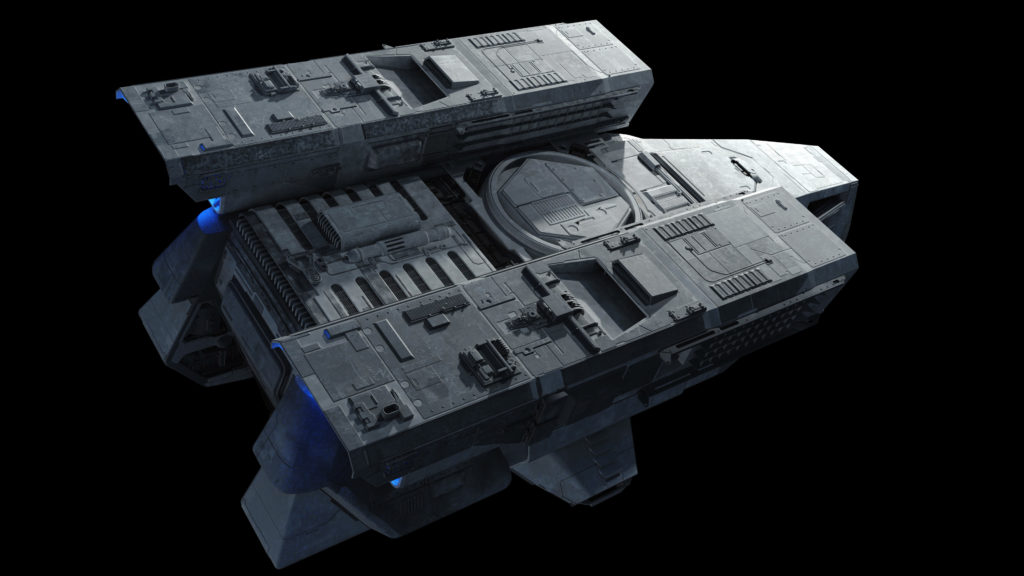 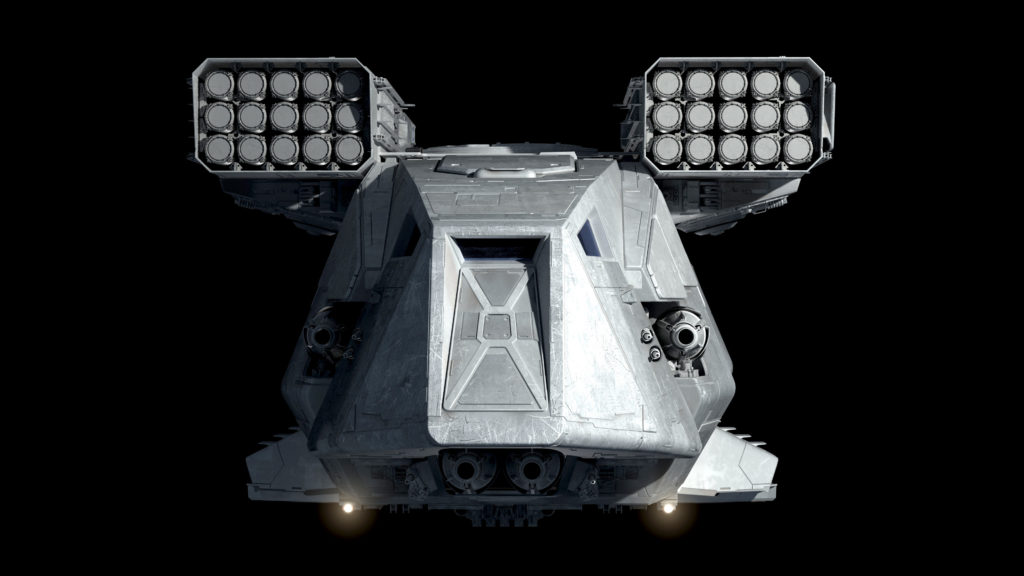 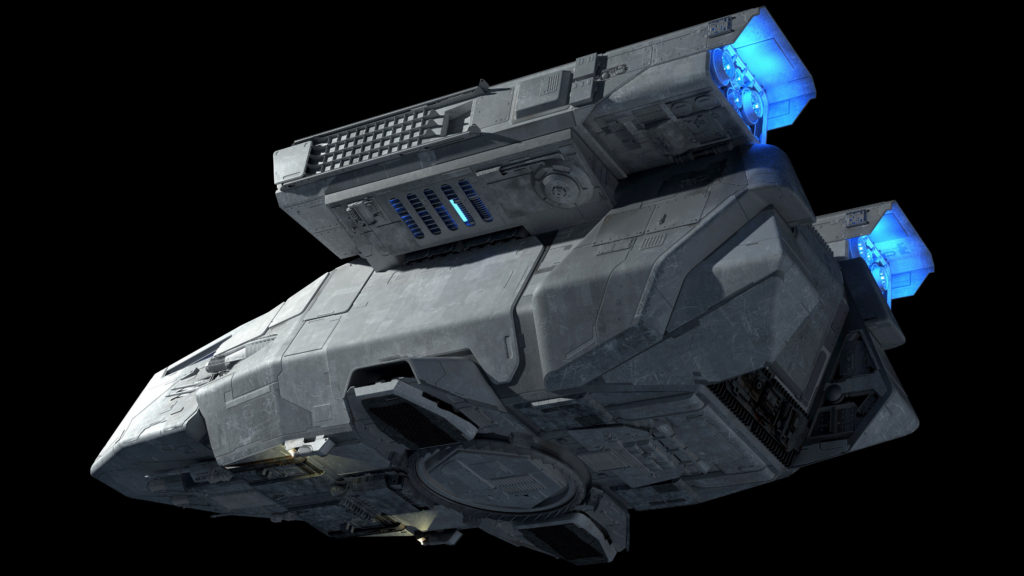 Please please, would it be possible to request a render taken straight from the top of the ship? I would like to introduce the ship to a fanmade expansion to the x-wing miniatures game, and need one to represent this awesome ship. I love your pictures!

Firepower aside, I’m loving this thing’s range of exit options: 2 airlock rings plus fore, aft & side hatches. Quite utilitarian.

Amazing model and lighting. I’ve used pictures from some of your old galleries as desktop backgrounds before; now I’m going to have to update my collection lol

I was also noticing how well-armed this thing is. Four big laser cannons which are presumably meant to be used against vehicles, 8 smaller cannons which I presume are antipersonnel weapons, and all those missiles. I imagine this thing could shred any fighter that got in front of it, as well as blasting itself a clear landing zone for its troops to deploy. (I kinda wish it had wings, though, like a LAAT :p).

Is there any chance you could do a Rogue One/ANH accurate Imperial 1 Star Destroyer?

This a DX-9 troop carrier? Sorry for typing this twice.

I wonder at average how many of these can be carried by the Imperator?
By away as always fantastic details especially the armor which look like is actually metal (the scratches help its metallic look) instead of looking plastic like a model.

This a DX-9 troop carrier?

If it is indeed DX-9 as Emars118 indicated, a typical ISD carries 15 of these guys.

It would have been nice to see this one in TFA, instead of glorified D-day landing-crafts with thrusters.
On the other hand, I don’t see any multi-directional weaponry on this ship.

Every generation of movie landing craft gets more and more incapable. The LAAT/i of the Old Republic was an amazingly well armed and maneuverable gunship transport. The Imperial Sentinel doesn’t have missiles or flank antipersonel lasers, but at least it’s armed and shielded. The D-day thing the First Order uses is literally a box full of stormtroopers.

The First Order D-day lander is stupid as a frontline troop transport. I could buy those things as being second-line transports, medivac ships, or short-range cargo/personnel carriers in noncombat situations like flying troops or supplies into and around an already-pacified city. Basically, anywhere you need something simple and effective that can carry a bunch of guys or some cargo but isn’t likely to get shot at. Like you say, they’re a flying box, and they have practically no bloody armament. Even a Zeta-class cargo hauler from Rogue One has more guns than that thing.

Who knows, maybe we’ll see a real First Order assault transport in Episodes VIII or IX. Maybe the D-day landers are the FO’s light troop transports, not meant for the front lines of major battles. We only saw them get deployed against armed villagers and Maz Kanata’s rogues in Episode VII. In a big invasion, though, without sufficient fighter escort, a squadron of A-wings ought to be able to bag those landers in droves. Hell, unless they’re faster and more maneuverable than they look, ground fire from heavy cannons ought to be able shoot down a bunch of them. And I wouldn’t want to fly one of those into a hot landing zone to extract troops, either, the way LAATs could.

And you didn’t even talk about the way the F.O. used them on Jakku. The thing has only a single opening at the front, overlooking the entirety of its cargo area without any kind of cover or protection, so how do you place that relative to the enemy ? pointing forward, naturally ! A position were a single accurate shooter could pick-off an entire squad, who would be cornered in the back without any way to escape.

Good point. That’s another reason the D-day lander sucks as an assault transport. Just like the real WW2 landing craft, once the door opens at the front, one guy with an MG/heavy blaster can kill most everyone in there in a hurry. But hey, the Episode VII writers seemed to love their WW2 parallels…

Yep, they loved the WWII parallel so much in fact that they completely forgot about the existence of repulsorlifts. I mean, a D-day landers has to have it’s opening forward if it want to move in the direction of the enemy, but the F.O. could have countered that kind of problem simply by landing them sideways.
It also seemed a little weird to me to make a parallel in design between the First Order and the allies, but hey, the E-11 was based on a British submachine-gun, so…

The triumph of visual design for visual design’s sake over a combination of visual and engineering design is a general problem in modern ship/vehicle styling in general I think.

@Valoren: “It also seemed a little weird to me to make a parallel in design between the First Order and the allies”

I guess I hadn’t thought about it that way, but I can see how you could find that weird, especially with all the First Order-Nazis parallels in Episode VII and in the backstory they created for it.

US and UK landing craft from WW2 are a lot more familiar to modern eyes, but Japanese and German landing craft also follow the basic archetype of boat with a ramp on front, because that’s the only type of vehicle that makes sense in an opposed mid 20th century beach landing, barring niche vehicles like the DD Shermans. I agree with Arvenski in the FO Storm-box being a 2nd line utility transport, because as an assault vehicle they are useless.

Parallel in design with the real world is a simple way to make something feel more realistic, but I get the impression that it doesn’t go much deeper than simple appearance in the new movies. Between the reference to both that and “apocalypse now” helicopter scene in TFA, and the clearly Vietnam G.I. inspired look of the rebels in Rogue one, with their modified M16 and M60-wielding door-gunner, I kinda get mixed messages.
@Chris
I agree too, because that’s pretty much the only logical explanation for their existence.

@Chris
Actually, I think the sentinel had concussion missile launchers.

Yep, the Sentinel had missiles. Speaking of which: if the Fett-Kenobi chase from AOTC was any indicator I’d be very surprised if the Stormie Transport’s box launchers weren’t capable of over-the-shoulder shots. Granted, you could probably transfer at least one pair of forward lasers/blasters to the rear sides and regain some aft energy-weapon coverage. Incidentally, agreed on the Nu-Trilogy’s designers seeming to push for ‘evocative’ over ‘in-universe sensibility’.