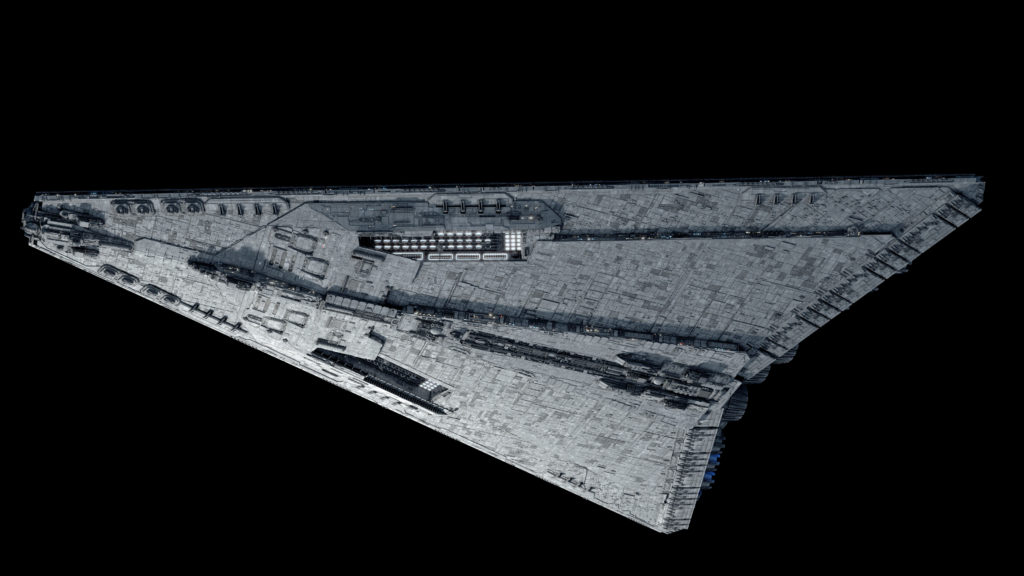 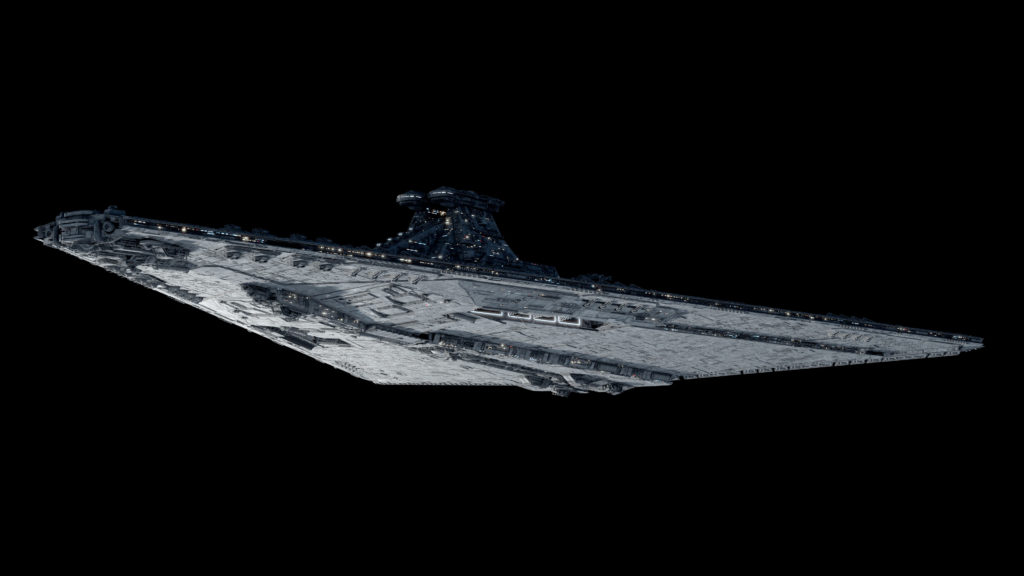 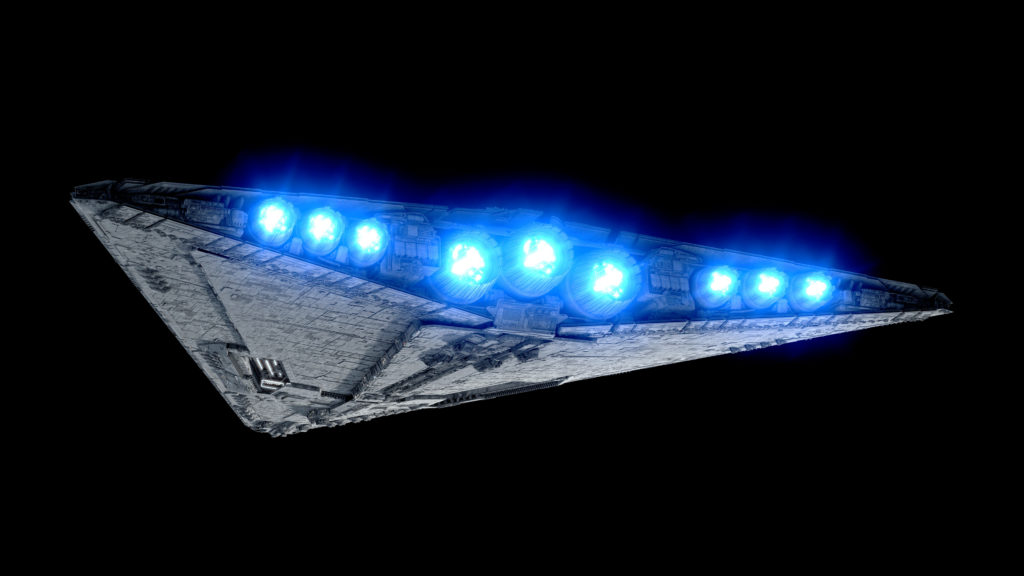 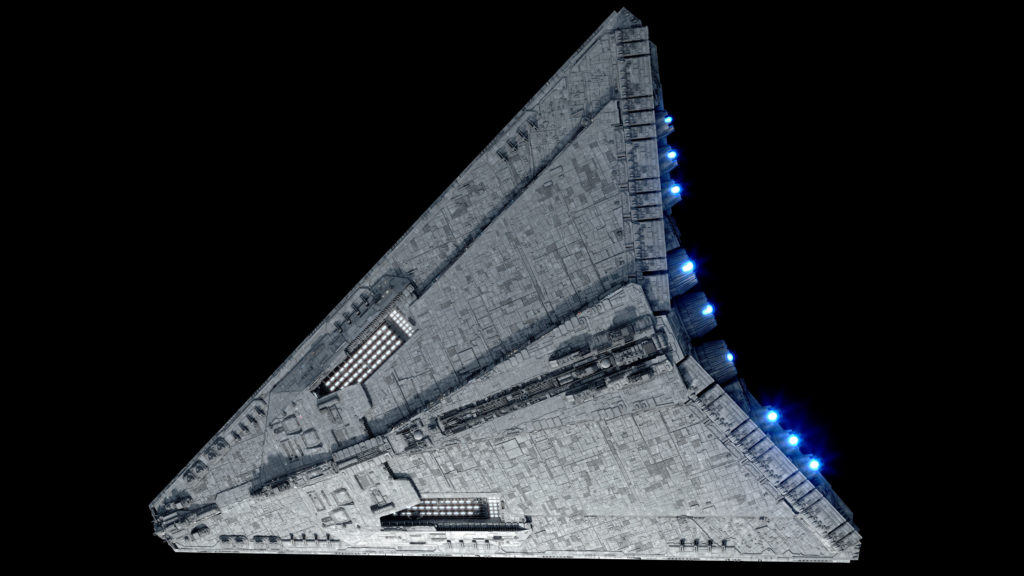 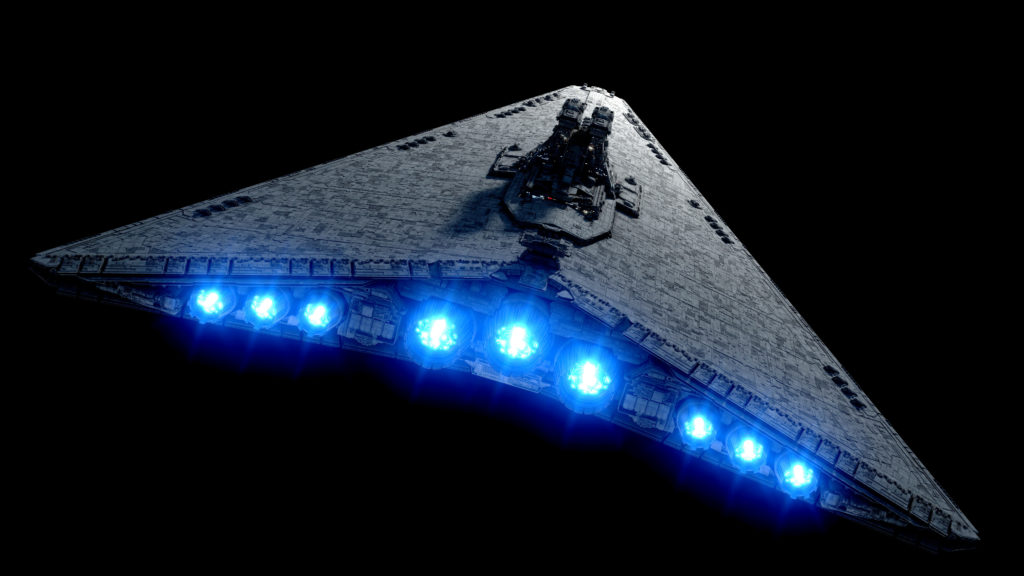 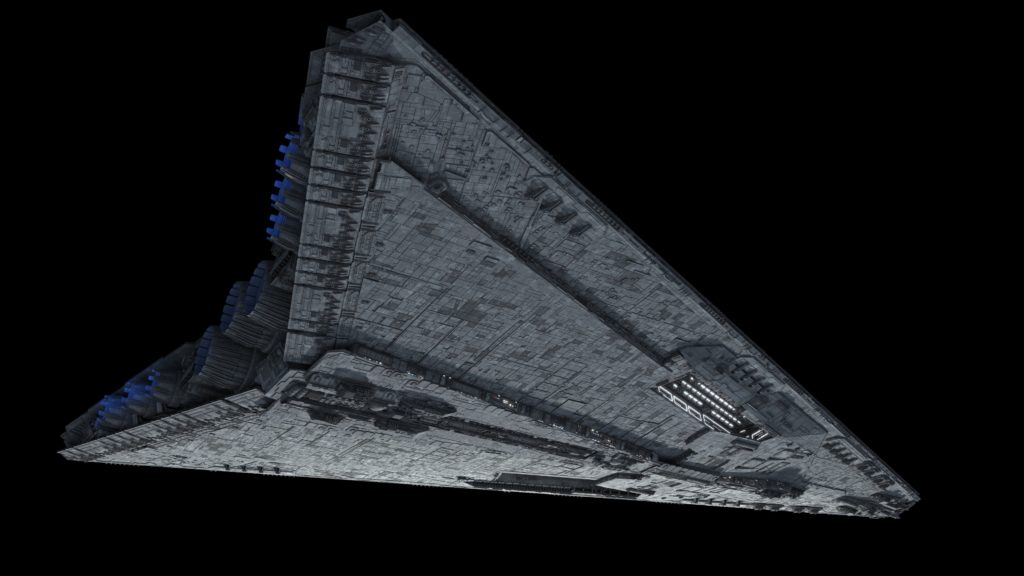 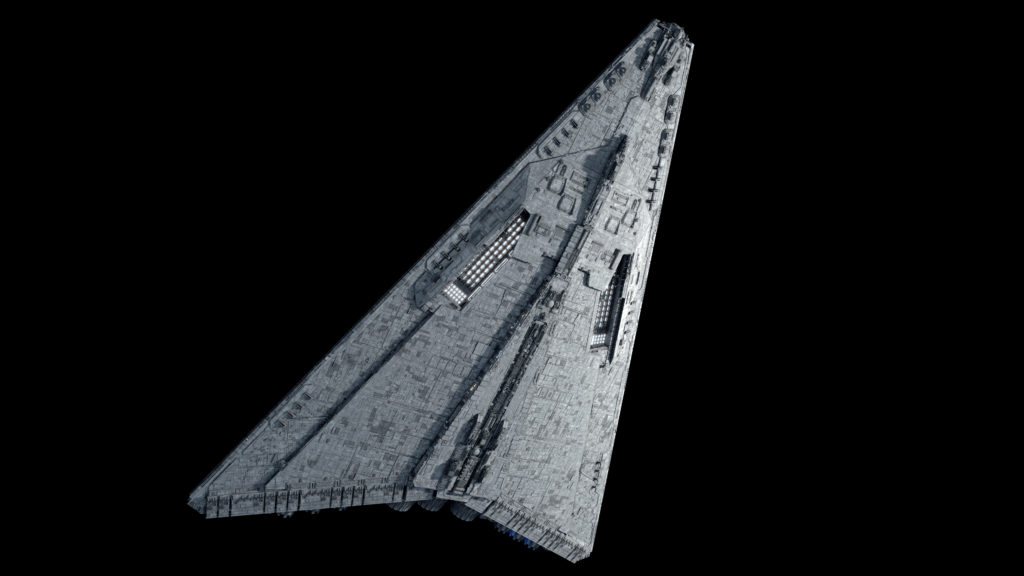 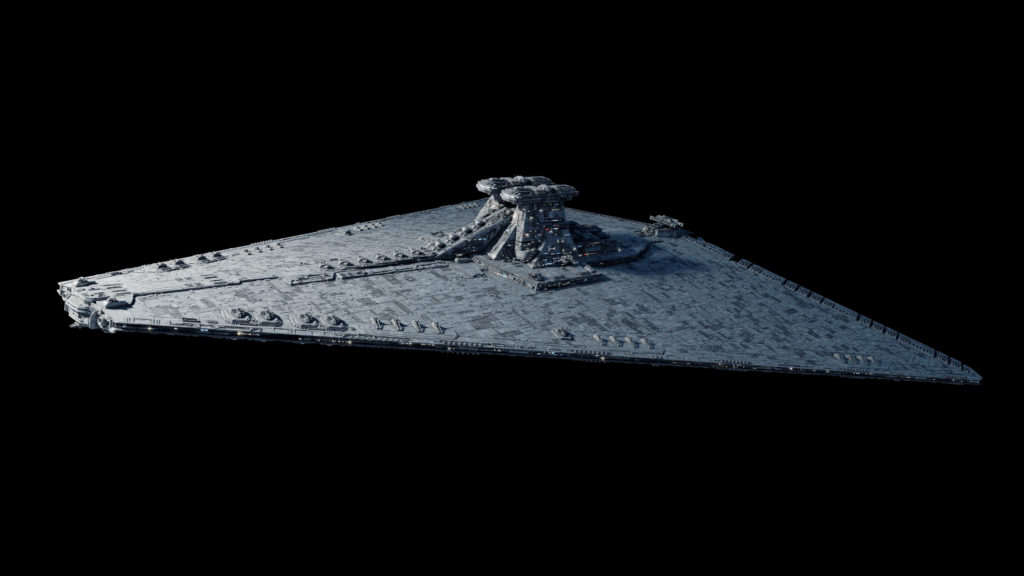 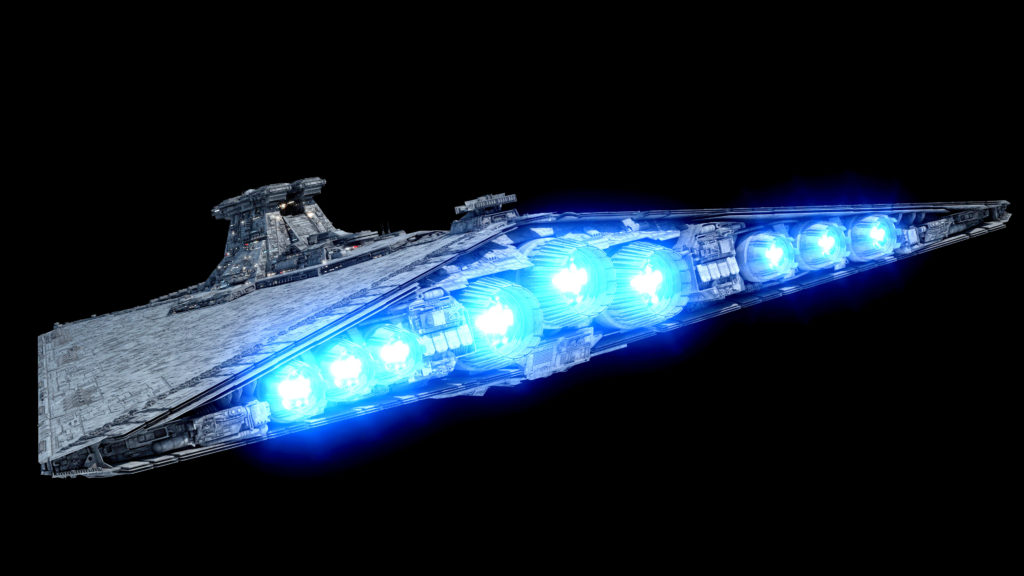 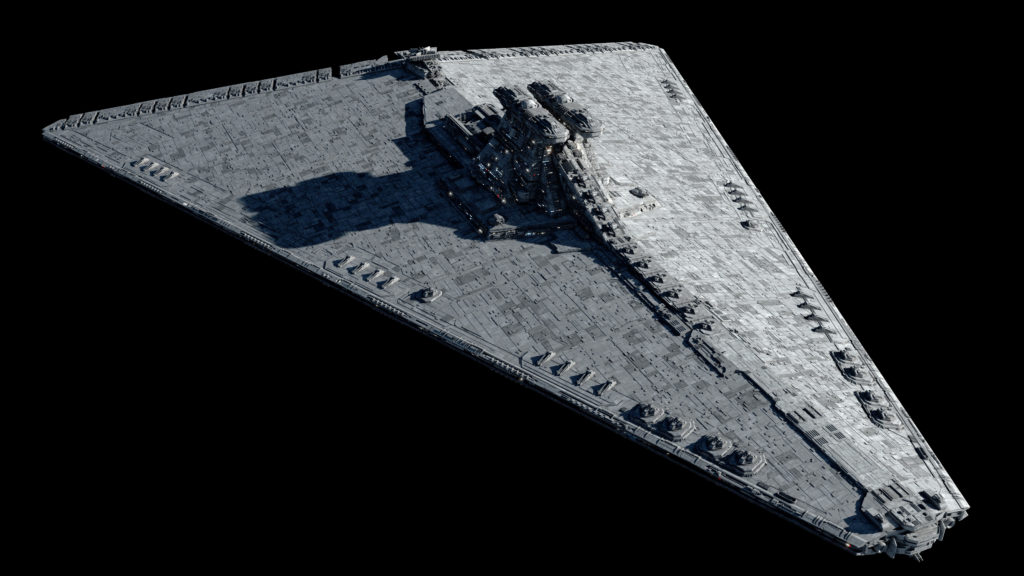 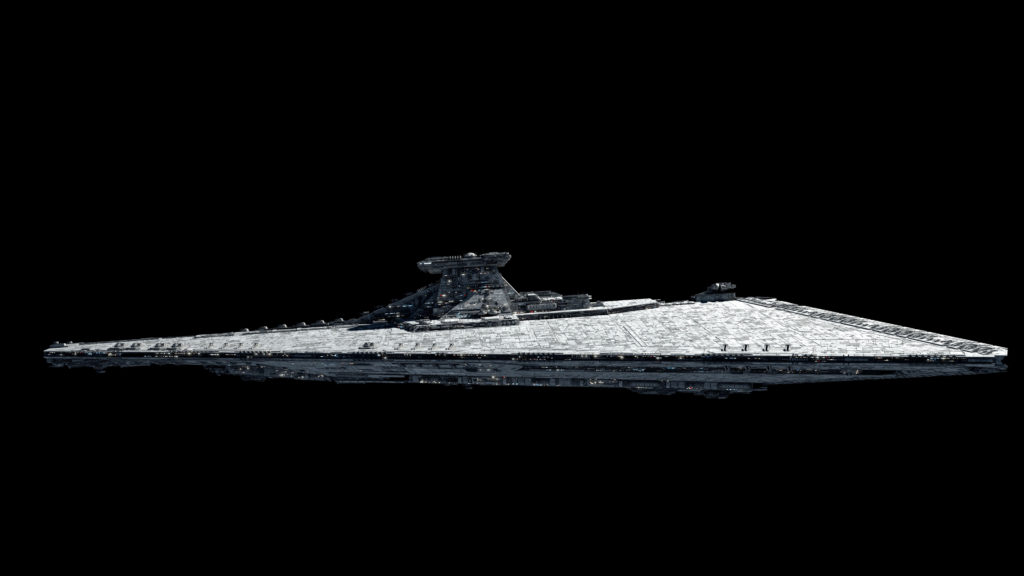 This is one of the most beautiful designs in all of the Star Wars universe. I love it! I wish we could see more of it in cannon.

What are the armaments on this ship?

How many fighters do you think this could carry?

According to Wookiepedia, 144 TIE/ln Starfighters

That figure is wayyy too low !! I know it’s the “official” stat…..but a ship this size ? Has to be at least 8 to 10 wings…so at least 576 starfighters (models from the TIE Line , I7 Howlrunners, Assault Gunboats, Missile Boats, Skiprays )

I know, very sad. Fractal originally intended the Secutor to have 8-10 wings when he designed it, but when it became legends, people started messing with the numbers and now its official complement is 2 wings.

Are there any rough power generation estimates given for this design? I’d love to see how it stacks up against other designs on that count. I find the power generation Fractal gives for these ships to be one of the most interesting aspects of his design process.

You know, given the description of the command ship Maelstrom from the old Living Force campaign, I wonder if the Maelstrom-class could have the same hull type as the Secutor-class. Their “official” stats seem to put them in the same weight class as well, as unreliable as rpg stats are. The Maelstrom is described as “winged,” however. Not that this would be the first time that different versions of the same hull Type would either have or lack wings.

So fractal, I noticed that the front of the ship has a structure similar to the Venator one in the middle, just before the command bridge and the turbolasers. Is it, like the Venator, a door where there are hangar bays?

So Fractal I found this edited Secutor which have it’s bridge tower move to the back from the middle and I think it was interesting to see it like that what do you think?

Oops forgot the picture so here: 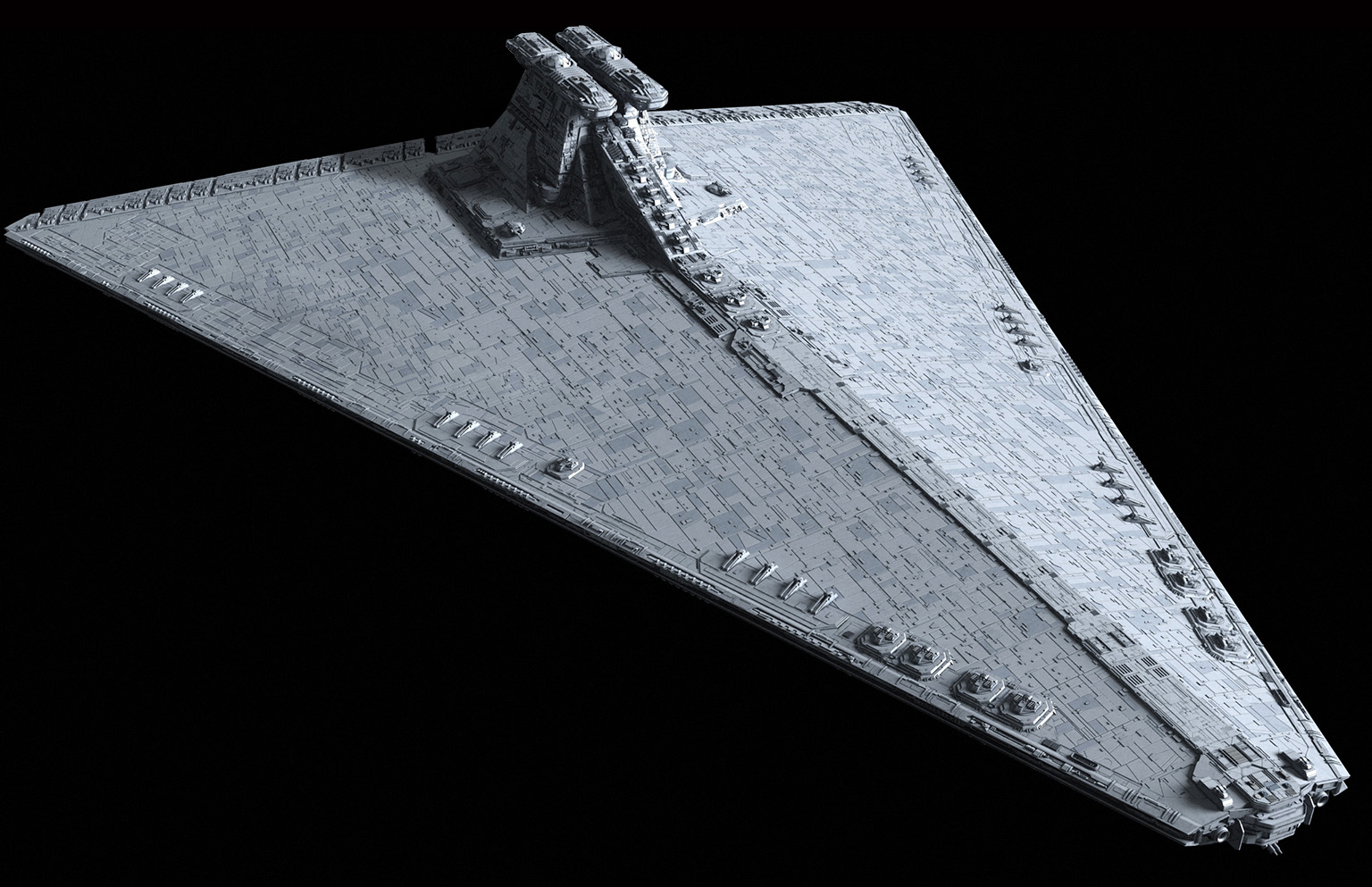 The massive hangar spaces are awesome! Although the Empire always had warships over starfighters mentality, I can see this dropping of hyperspace and spew out its TIEs to overwhelm practically anything.

Whoops, unintentional comment-reply. Agreed on the big hangars, though.

If I was going to call out any Fractal design for not having enough power generation for its stated design goals and features, the Secutor might be a good candidate. The hull shape can’t be able to fit a reactor any larger than an ISD’s reactor and possibly not even that size. Despite that, the Secutor is significantly better armed than an ISD, has a larger engine bank to push it around at high speed, and a vast surface area to keep shielded. Perhaps the Secutor is only really capable of using its stated weapons fit while fighting virtually unshielded/at… Read more »

Secutor would use uprated Venator modules given its similarity to that design and the time period. Venator reactors are fairly compact, so you would have several of those powerplants rather than a single large reactor. Less efficient, and definitely per unit weight less effective a brawler than an ISD. Weaker per unit shields as well. Overall, enough to outrun and outfight an ISD, but not by as much as the raw size suggests it ought to. It’s definitely a specialized pursuit ship and carrier rather than an all-rounder.

Very fair points re: Secutor trading shields/firepower/general endurance for speed & small-craft carriage. Dunno how much of a problem this proved against most (much) spindlier CIS capitals, but I’d certainly attach these things to sector groups with either a decent-size wolfpack or several no-shit cruisers. Fun to visualize an isolated Secutor-v-Home One-tier Mon Cal scrap, though.

Assuming Home one is as big as it ought to be, the Secutor should use its agility to stay far away and hose down the Mon Cal while its fighters go in. I wouldn’t want to go toe-to-toe if I were the Secutor captain.

Sounds about right. I get the impression Secutor could handle itself against most CIS ships short of a combat-modded Lucrehulk, and even there it might have enough of a footwork edge & fighter-number parity to carry the day. Can’t say I’d envy the swamping most Mon Cals’ fighter contingents would be in for either.

Fighter parity with a Lucrehulk is pretty dubious. There’s a 1500 Vulture number from the ICS which should be more than enough to swamp a Secutor, even with the upper end estimate of 10 wings. That 1500 Vulture figure is from a Phantom Menace era conversion serving primarily as an assault transport, with most of its cargo volume used for massive landing craft, tens of thousands of tanks/troop transports, and the better part of half a million battle droids. A late Clone-Wars CIS Lucrehulk used as a pure dedicated carrier could probably deploy close to 100,000 light fighters, although its… Read more »

I am glad this design was re-introduced into canon. A lovely flying delta.

Wrong the class name is canon not the design, Although I wish it was.

Oh boo anon! You are actually right. Still, when I was reading the book ‘Tarkin’ where it was mentioned, I imagined the Conquest as looking like Ansel’s design. It is implied unless a new design is introduced for the class. Agreed with Sephiroth0812 that Ansel should be hired to make the “canon” Victory and Secutor classes his designs.

I dunno, to me the Secutor always looked like a giant flying moth, lol. As for the new Disney canon, just like the Anon said, the Secutor is canon as a class just like the Victory-class SD, but both of their canon design, armaments and complements have not been elaborated upon as of now which is likely because they only appeared so far in the novel “Tarkin”. No other work has yet taken up the Secutor or the Victory so while they exist in the new canon, they are not really used yet. A part of me wishes that if… Read more »

Does anyone have a link to the Saxton ship classification system. I am curious to see how it differs from the Anaxes War College system. I have not been able to find any information on it.

Dr. Saxton’s technical commentaries are on theforce.net, see below.

Thank you for the link. Lots of good information.

Happy to help. I find his technical writing really interesting too.

So far as I can tell, Saxton’s classifications roughly parallel mid-20th century naval scaling norms: patrol boat/gunship<corvette<frigate<destroyer<cruiser<battlecruiser<battleship/dreadnought. The Anaxes system's major differences from this involve 'cruisers' being generalized as smaller than 'star destroyers', with battlecruisers & then dreadnoughts forming the next two tiers.

Thanks for the info. Does Dr. Saxton give size ranges for each category? Such as, where the Anaxes system states that Star Desroyers range in size from 1000 to 2000 meters.

Length isn’t exactly the best way to measure warships, especially when their proportions range from the saber-esque Vengeance to something like a Lucrehulk or torpedo sphere. When it comes to standard KDY wedges, length is a useful approximation for volume, but the key statistic to measure is power generation above all else.

Also, even with length being used for Star Destroyers, it’s misleading. A Procursator is 75% the length of an Imperial class but that translates to actually being less than half the size.