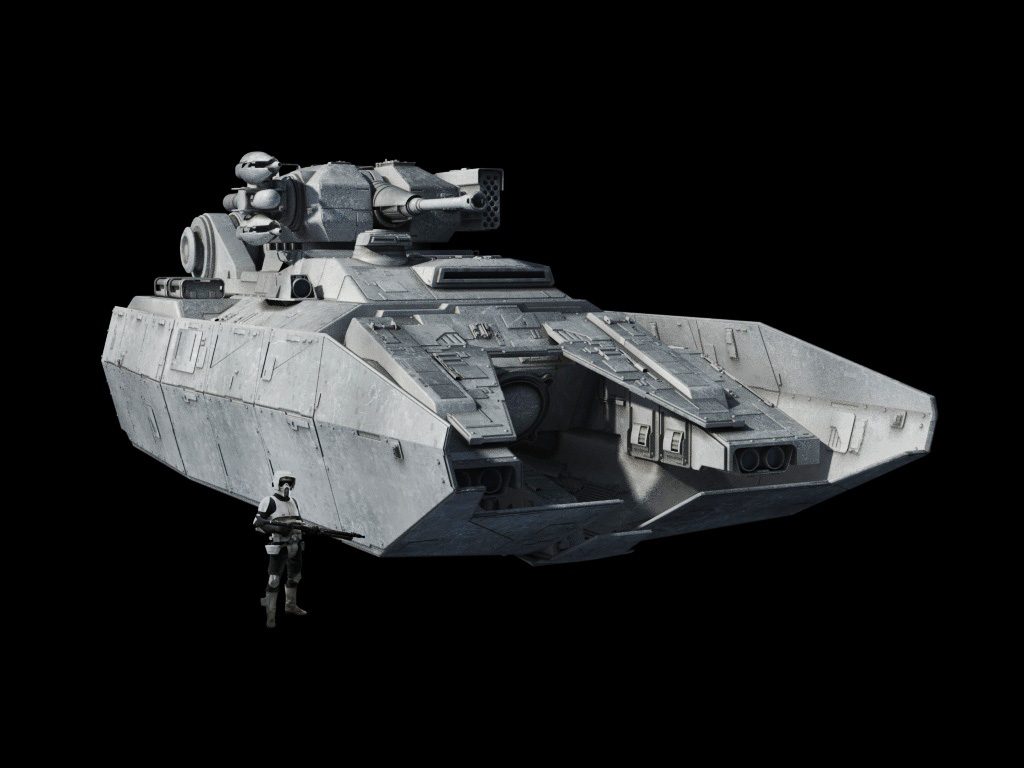 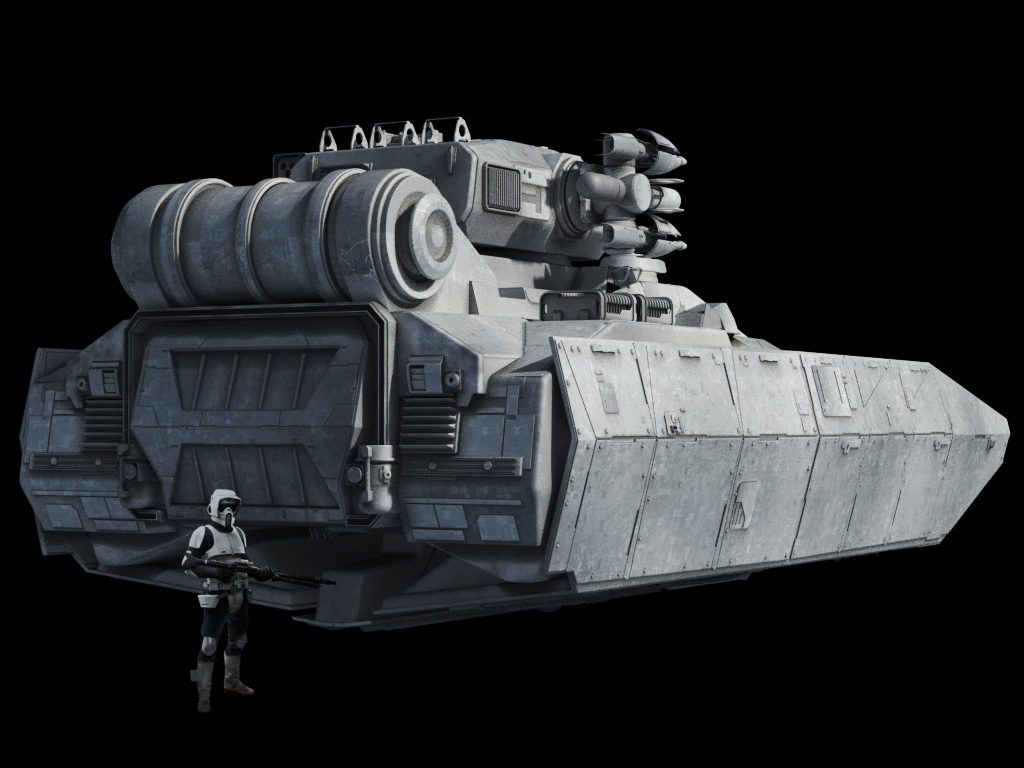 Looks a lot like a US Army M3 Bradley Infantry Fighting Vehicle.

It gets that a lot.

Must admit, I didn’t expect you to actually make a render of any human characters, let alone Scout Troopers.

And I take it that the round cylindrical object at the back is a fuel canister? Yes, I’ve seen too much instances of Peace Walker with fuel drum canisters on the back of tanks.

It looks as if it could be a shield generator/projector, like the big thing I presume is the shield gen/proj on the Praetor.

holy crap that thing is huge

Is there a reason for it being so large? The troop complement alone doesn’t seem to justify it’s size. Does the reactor require that much volume?

Partly reactor – the main gun is single AT-AT chin weapon. That alone dictates a certain size. It’s also repulsorlift, so intrinsically it would not be going hull-down very easily, and would be flying, so tallness is not so much of an issue compared to a surface-contact vehicle.

A lot of the maximum dimensions are dictated by wrapping the repulsorlift system around the crew compartment. The crew compartment is large because I envisioned the thing as operating buttoned up for very long periods (say deployment on toxic or low-atmosphere worlds). At that point being crammed into a tin can like a modern IFV would not do. So a squad, but room inside for a stretcher area, a rest station for the crew, refresher, small galley, extended equipment storage etc. Or rip it all out and cram a platoon in with standing room only. That’s possible too.

Thanks for the clarification! It would be interesting to see it next to another big repulsorlift vehicle like the Trade Federation MTT!

In a conflict against a relatively peer opponent with credible anti-armor systems, it pays to have a small silhouette. In Star Wars, the necessity of shielding surface area probably makes it even more important than for Earthbound vehicles.

If you stripped out crew amenities to decrease height on combat vehicles, perhaps you could have a support vehicle on the same chassis that did away with the large reactor and turret to instead fill the entire vehicle with those rest stations/bathroom/galleys on the company or even platoon level. In the lulls between fighting, vehicles could dock via airlock to it, two at a time to refresh the crew.

Such a formation would have less firepower/squads transported per unit, but maybe the increase in survivability from drastically reducing vehicle size would justify that.

Liking the thought behind a specialized relief variant, though you might wanna keep the original reactor just for shields & thrust.

Nice detail as always. Reminds me of the Ubrikkian tank designs from West End Games. They were much smaller though – said to be 20.5 metres, but the picture suggest about 6 metres.

Main battle tanks and IFV’s have pretty much reached their maximum size because even if you threw out the absurd fuel usage to power them, they simply are as big and heavy as they can get to use modern roads. Even now, tanks and IFV’s sliding off the sides of roads into ditches, road side canals, etc are a real threat to modern armor. Insurgents understand this and use it to their advantage. No need to mine to booby trap the shoulders of the road if you know the IFV rumbling down the street will be forced to go right down the center. IF you introduce repulsorlift technology though, suddenly it is a whole new ball game. Size and weight are no longer a a consideration beyond fuel consumption and means of transport.

If you get any larger than that, you’re essentially talking about a low-flying corvette.

What is the round deal on the front? Sensor?

Just some detail. Juggernauts have it too as part of the suspension system region. Bossing for power trunk? No fixed idea for what it’s supposed to be.

Cool, thanks for the reply!

A worthy heir to Star War’s obsession with oversized troop transports. There’s pretty much a new one every movie.

That’s only most of the movies. No idea on ROTJ.

I know the types, I mean why are they necessarily oversized?

every single one of them except for the AAL would be a superheavy by earth standards.

There is a Lambda class shuttle in ROTJ Chris.