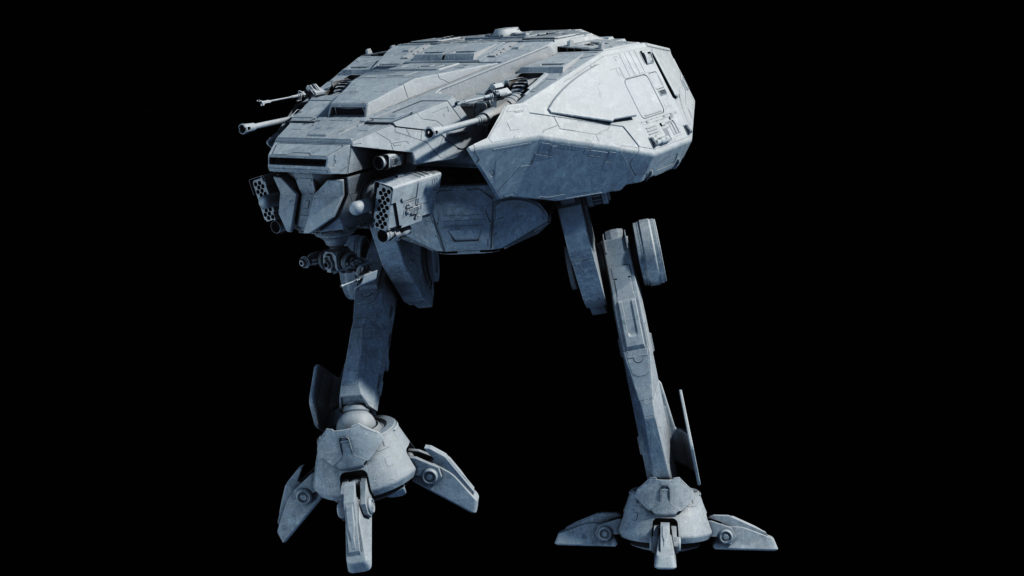 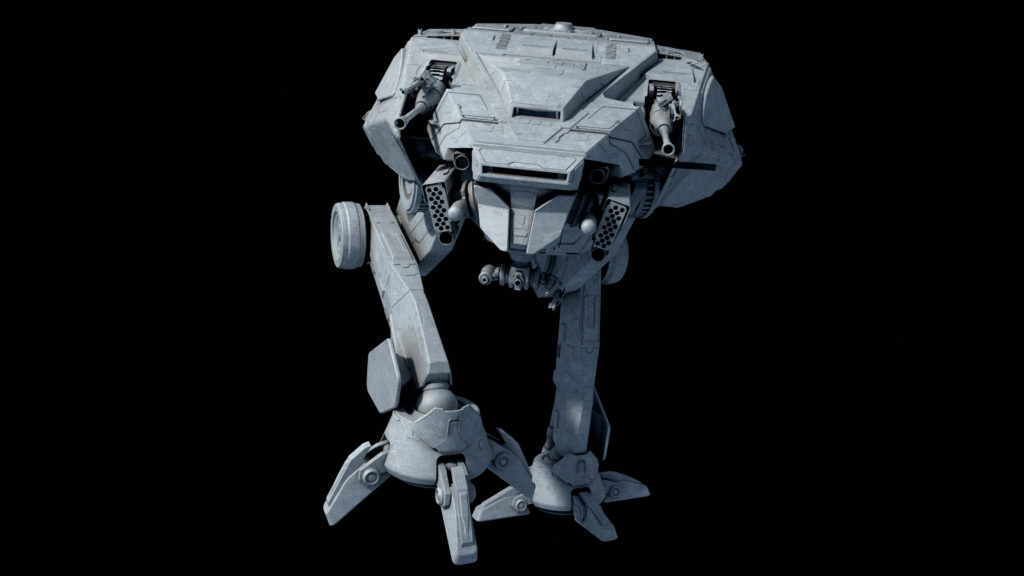 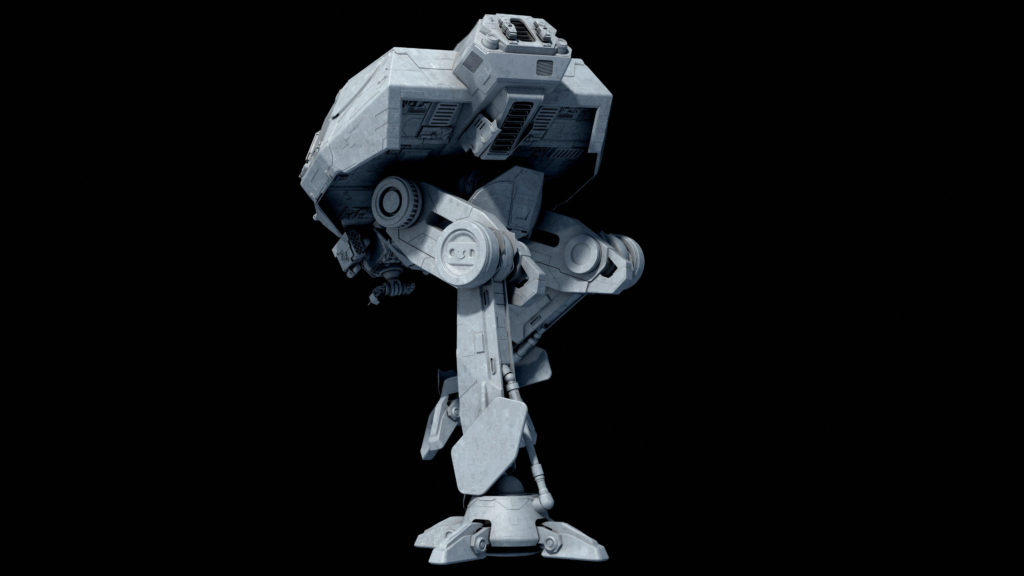 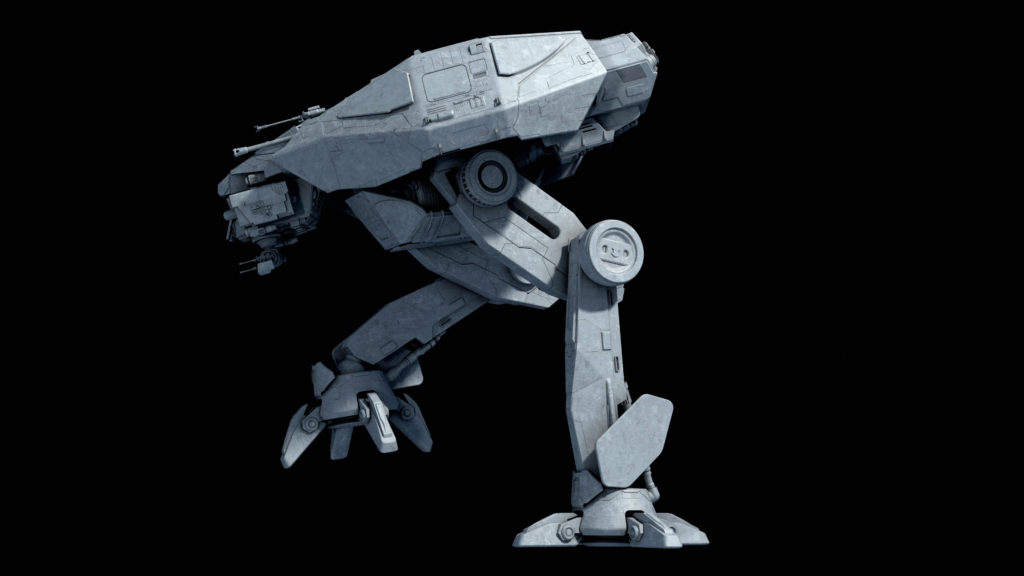 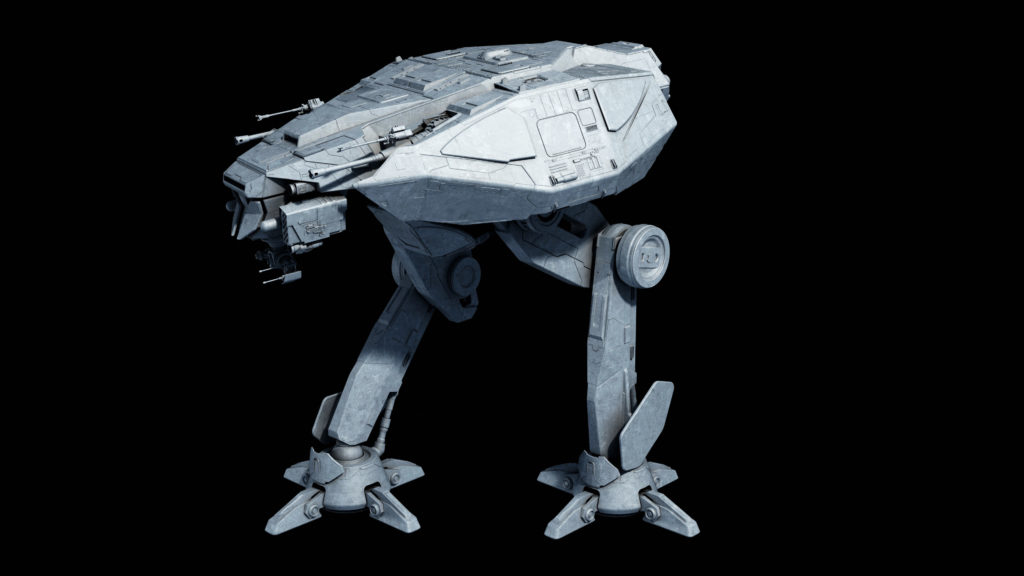 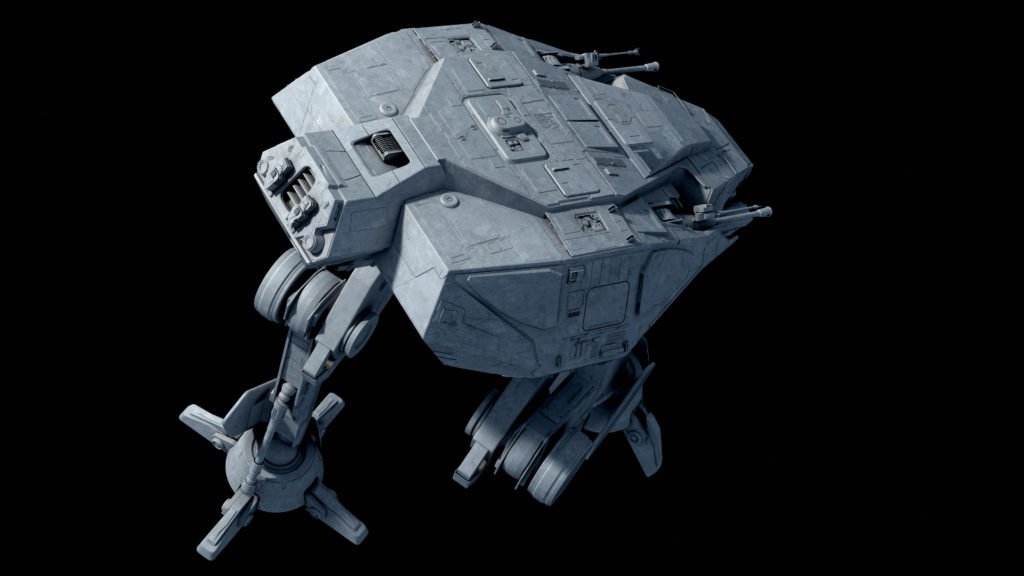 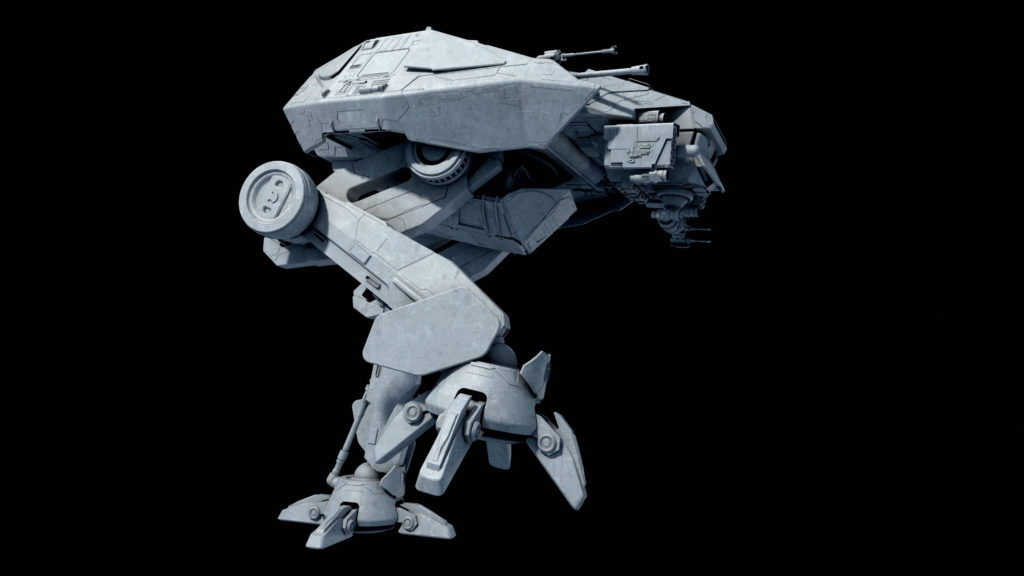 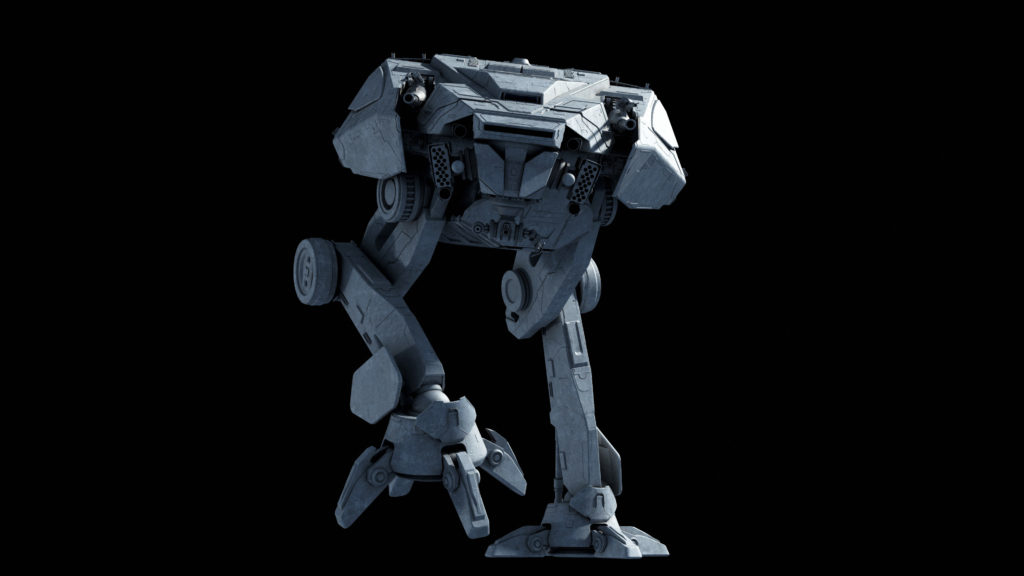 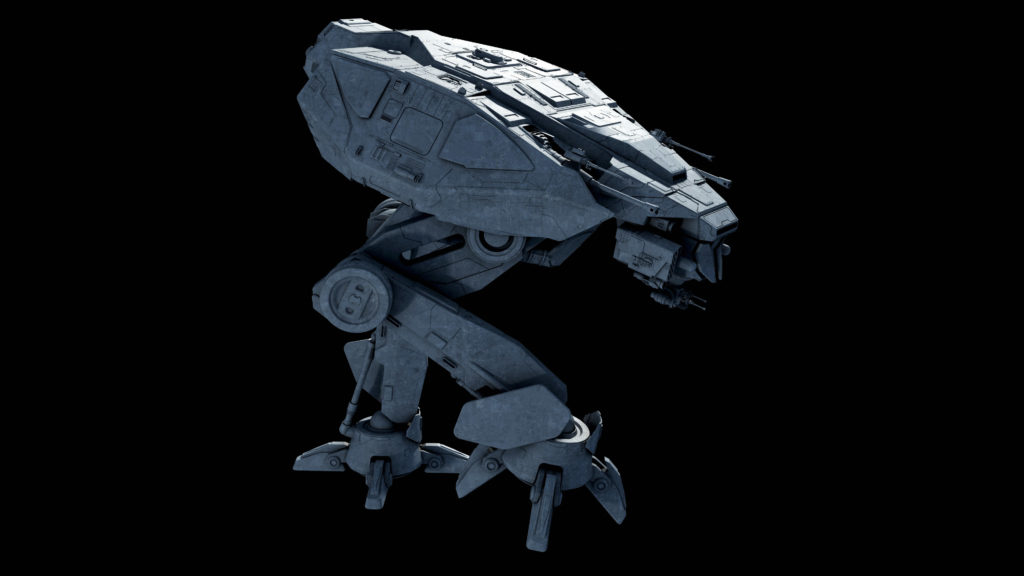 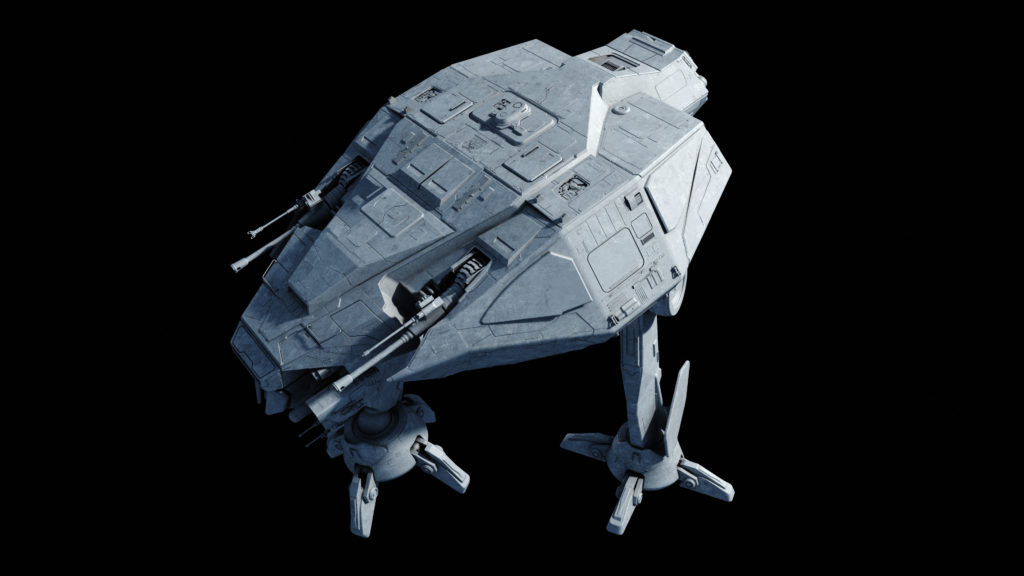 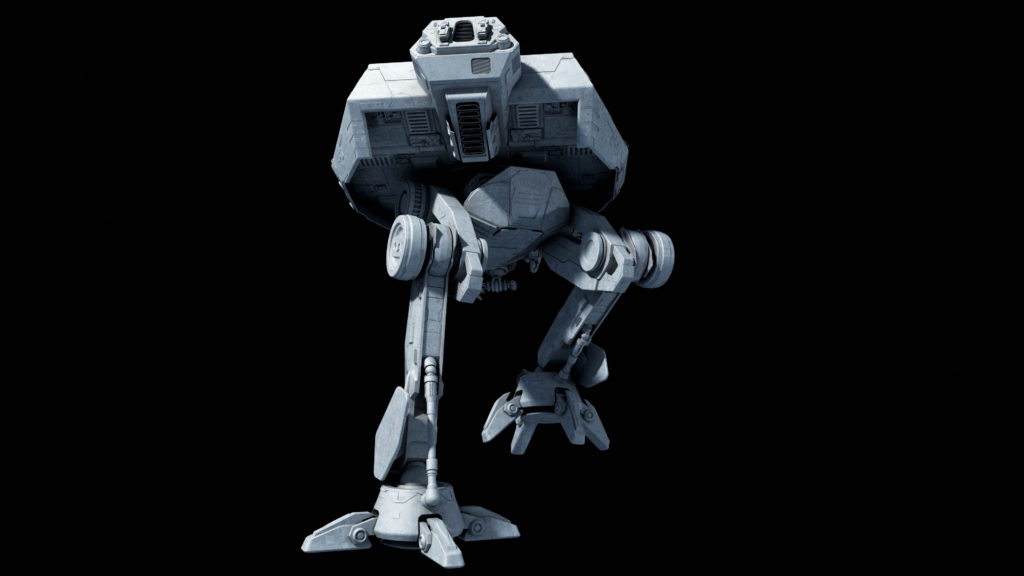 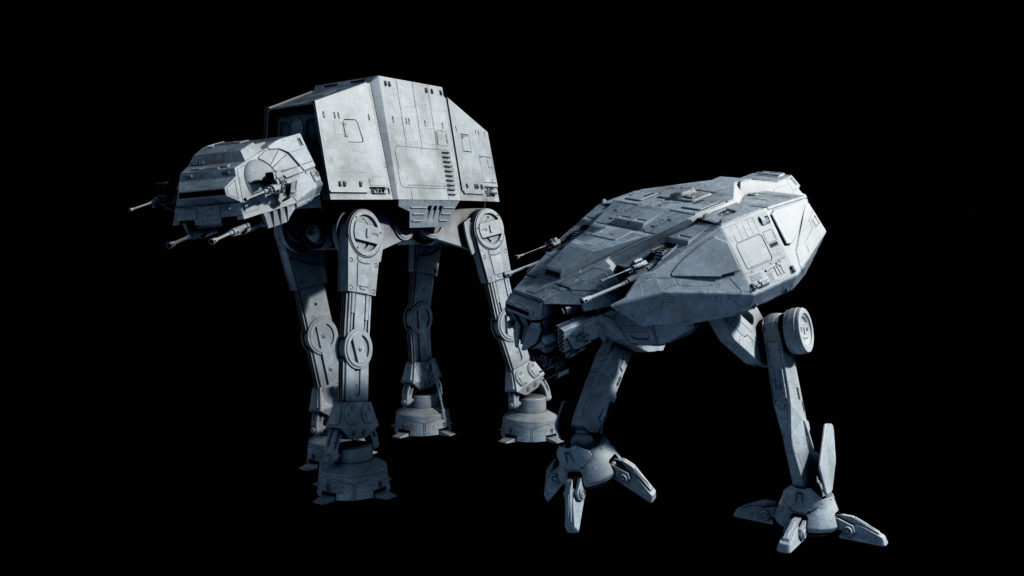 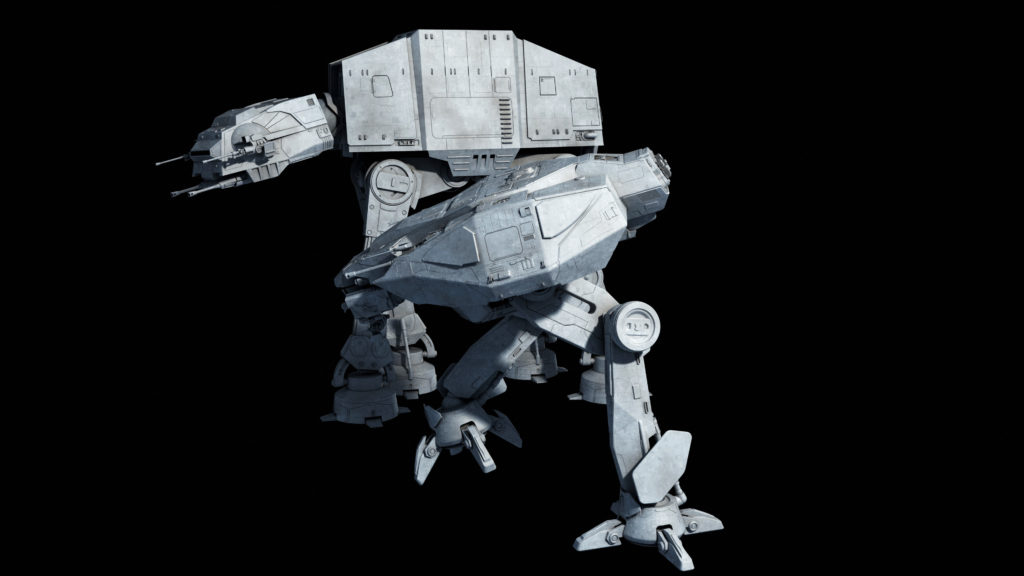 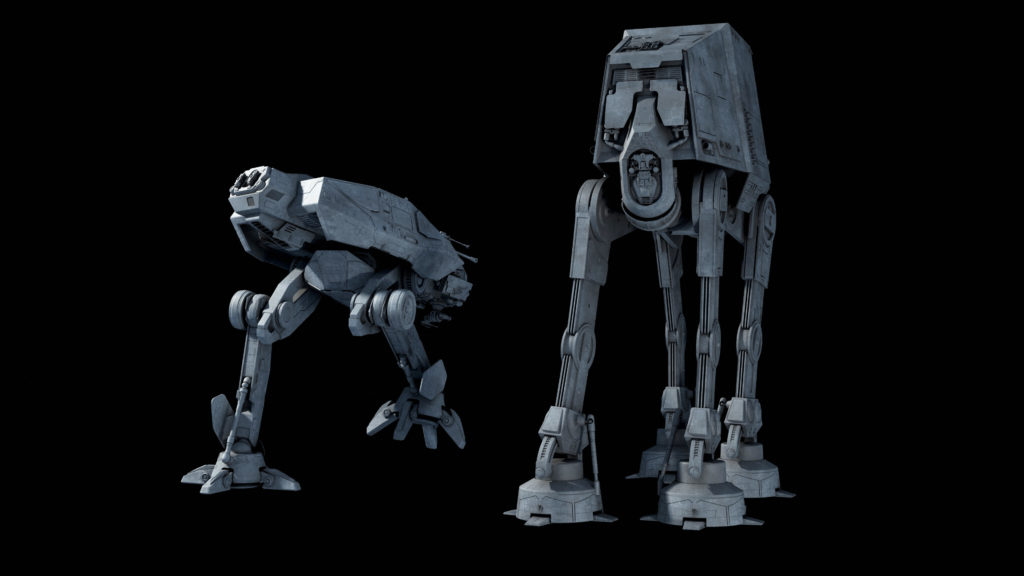 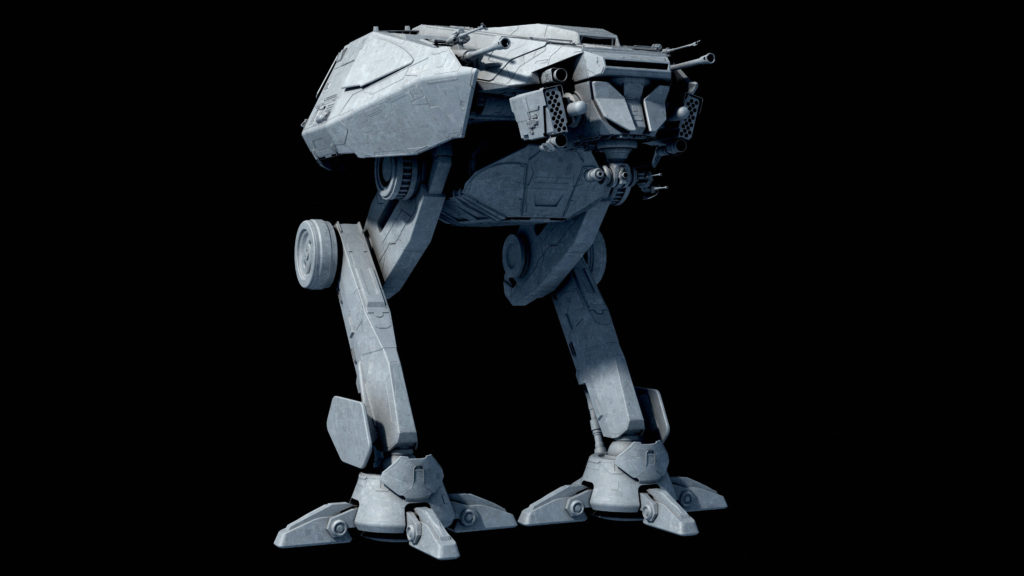 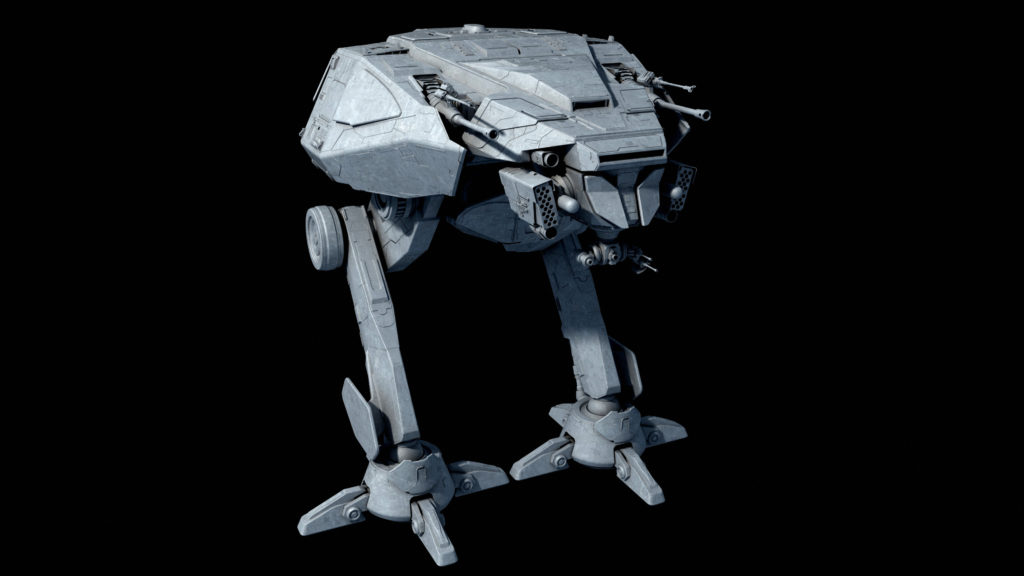 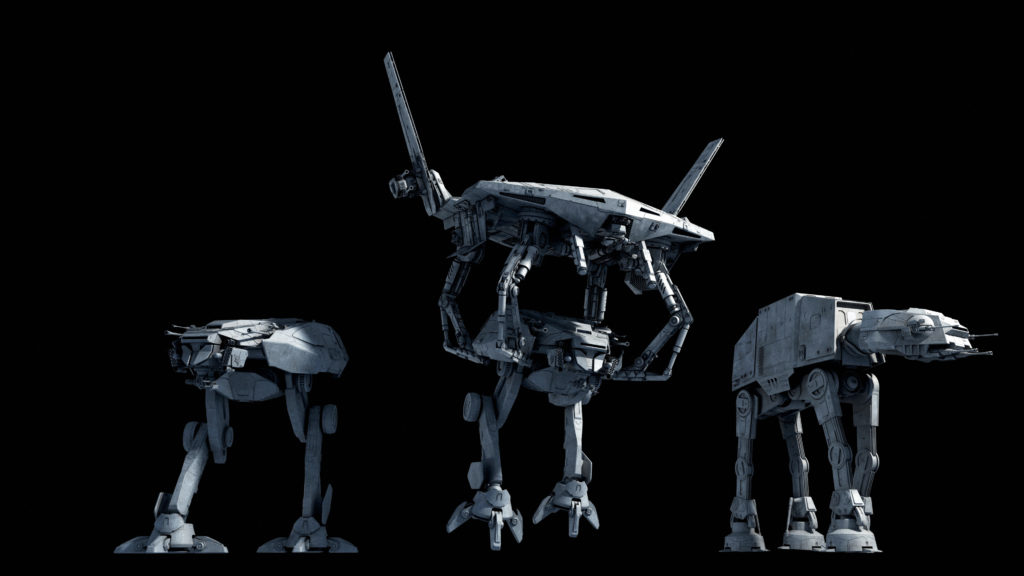 This thing reminds me of a bipedal First Order walker seen for a very few brief moments on Kijimi in Episode IX. perhaps you could make a story for it where the First Order combined an AT-DP, AT-AT, and AT-ST to get this thing.

Also, could w get some statistics, like crew, weapons armor?

Yeah, it kind of does, although Fractal made this one long before we got the UA-TT (the First Order walker from Kijimi). Fractal said that this is supposed to have about 80% of the armor strength of the AT-AT. As for weaponry, it appears to have an AT-AT main armament–2 heavy laser cannons and 2 medium blasters–plus 2 concussion missile launchers, a dual repeating blaster turret, and I think a concussion grenade launcher. I’m not sure about crew complement, but I estimate around 3-5. I confess, I’m not the best at assesing crew sizes, and it doesn’t help that SW crew sizes are especially difficult to estimate. Part of the problem is that crew sizes are just all over the place, but I think it mostly has to do with the fact that there is a lot of advanced technology in SW that should theoretically reduce crew size, but everyone still seems to be doing everything by hand.

So is it just me, or is anyone else getting armless Warhound-class Scout Titan vibes from this?

I wish I had some of these in Thrawn’s Revenge. They’d take out plenty of “rebel scum” that’s for sure.

Oh my god. It looks like an AT AT and a Stalker from Battletech had a baby. I WANT this now. This needs to be in SW.

A weapon to surpass Metal Gear.

Was this designed by Omni Consumer Products?

The AT-SW came about after four years of research and development as well as hundreds of simulations and trials. Whilst the Imperial Navy was growing as was the Stormtrooper Corps, the number of ground vehicles available to them was shrinking. The versatile and flexible AT-TE was being retired or put into garrison duty and away from frontline forces whilst many Army Officers and Corps Commanders felt that the AT-AT was a rather poor replacement for the AT-TE. Whilst tougher and better protected and far more intimidating, the AT-TE was also more flexible, smaller and more stable as well as being more agile than the lumbering AT-AT. As the AT-AT also served primarily as an infantry carrier it was neither fox nor fowl, and was felt to be a jack of all trades. What the Ground forces wanted, was a dedicated combat unit.

Developed on Caridia by KDY what would emerge from the testing grounds on the Stormtrooper training world was a deadly addition to the Imperial military. Unlike the AT-AT the AT-SW was a bipedal design and was smaller than the AT-AT giving it a smaller profile head on and from the flanks. Its powerful reverse joint legs and the latest in hydralic and non-organic fibres allowed the AT-SW to reach over 80kph and it was considerably more agile than the AT-AT, able to turn very quickly unlike the AT-AT which had to lumber round in a slow circle.
With no troops onboard and a crew of four (gunner, driver, commander, electronics/radio operator) the AT-SW devoted its entire bulk towards weapons and protection. Dual heavy and light blaster cannons gave it a similar punch to the AT-AT whilst a pair of multi-shot rocket launchers allowed the AT-SW to unleash a barrage of explosive rounds towards targets and smother an area with explosions. For point defence and to protect its more vulnerable underside (a significant weakness with the AT-AT) a dual light repeating blaster and a single rapid firing grenade launcher were fitted under the vehicles chin and both weapon systems had a wide arc of fire, preventing any brave or suicidal infantry from attacking the walkers belly or legs in close terrain.

Like the AT-TE and AT-AT the AT-SW used energy absorbing armour that would rob blows of their thermal and concussive impact, dissipating it across a wide area and greatly reducing the punch of a weapon hitting it. But the AT-SW’s most impressive defensive feature was the shield generator installed next to the powerplant. The shield generator made the AT-SW an exceptionally hard target to kill, even if once the shield was down, its regeneration rate could politely be described as abysmal. Still it made these potent walkers very hard hitting and very hard to kill targets.
Unfortunately the AT-SW was also very expensive to produce thanks to its various unique systems and whilst cost was never really an issue in the Empire, the budgetary wrangling between the Army, Navy and Stormtrooper Corps initially saw production levels of the AT-SW never even come close to those of the AT-AT and AT-ST.

Still the Imperial Army and Stormtrooper Corps pressed ahead with its reorganisation (https://fractalsponge.net/?p=3952) and after two years production was proceeding apace with the AT-SW becoming the standard combat walker of the Imperial military whilst the AT-AT was finally moved into its Mechanized infantry role that it was designed for. Still it was not the largest combat walker deployed by the Empire, that title would go to the massive AT-SE and simply gargantuan AT-SP

I can’t help it, this walker reminds me of a Gizka, lol, those little critters from KOTOR.

Nothing wrong with that.

fractalsponge,you are not working on the AT-AA walker? … or have such ideas

I wonder if repuslorlift ejection seats might make sense for a tall walker like this, or the AT-AT for that matter. If sensors in the legs detect that the vehicle is falling and cannot be stabilized, or the reactor has sustained enough damage to be susceptible to a catastrophic explosion, the crew needs to get out, fast. Conventional hatches work for tanks, but being stuck on the top of a burning, falling 6-story walker would kind of suck.

well, if the empire cared about it’s people enough for ejection seats…. they’d probably just design their walkers to not blow up when they fall over. but this is irrelevant… probably because they designed their walkers to blow up when falling over… on purpose. This prevents strategic information (aka the pilots) from falling into the hands of rebel scum, as well as more or less intact equipment.

Uh…no? The tripped AT-AT fell at Hoth and looked structurally fine. It took another strafing run to cause the explosion (I suspect after hypothetical failure of hypothetical shields after ground impact).

Acceleration compensators that can neutralize thousands of G’s are standard tech in the SWU. Incorporating something with even a tenth of that capacity into ground vehicles to protect against crashes and such would be well within the technology limits of the SWU.

In addition to what Fractal said, every default TIE comes stock with ejection seats. I’m sure that there are data wipe protocols for sensitive information, but that doesn’t mean vehicles are designed to kill their crew.

They Dont blow up from fallng over! In Ep V, that was because the rebels fired on its weak section ( aka neck ) fter it fell over.

Hey I was just looking over some old designs and I had a question.

How do the side doors open on the (LAAV/i) as in vertically or horizontally?. I was trying to figure it out but couldn’t.

I think is most likely the latter and it would open like a slide door.

How many of these walker does everyone guess can fit on the front half of Chi main bay? Two or Three? Seems like squatted down they take up the floorspace of two Broadswords side by side?

I’ll admit, I love it cause it reminds me of a Zentraedi battle pod.

I absolutely love this design.

What combat role is this filling for again? If I’d have to guess, supporting the initial offensive.

IIRC its more like a main battle walker kind of thing. The AT-AT for all its size is a glorified M113 APC with some big guns. Its a troop carrier, this thing is a dedicated ‘imma kick you in the teeth’ fighting vehicle.

The Imperial M113 is that dinky little repulsorlift troop transport from the Rebels cartoon. The AT-AT is more like a super-heavy IFV. The best real world analogue would be an up-gunned Israeli Namer.

I think he was reffering to the real-world M113, not Imperial.

Hey is there anywhere I can find stats on your ships like weapons and weapon types? I tried to find something but all I found was someone who thought medium turbolasers were super heavy turbos lol.

PhantomFury
Reply to  Steven A Futrell

Search for “Star Wars Ships Design Technical Notes 1” on the site, it should be listed for you.

Steven A Futrell
Reply to  PhantomFury

I was thinking more on the lines of how many weapons does it have and what types the total armament of each ship.

We generally try to figure that out ourselves. Fractal doesn’t tend to keep a count unless it’s a commissioned ship with a certain armament specified by the client.
Some ships have estimates in their comment threads, but I don’t think there’s any database where they’ve all been compiled.

The one I am really anticipating though is the finished LAAV in 4k I really wanna see that one.

I’D BUY THAT FOR A DOLLAR

So this thing is cool, detail is awesome. The idea of projectile pods on the front similar to an assault gunboat are very nice. it looks like an appropriately armored biped. However, it doesn’t look anything like the ATAT. looks like it’s manufactured for a totally different regime. If this was for some other group, like maybe the mandalorian’s I might buy that.

This walker is actually heavily inspired by a walker that looks very similar to it in the EU comics they were seen protection the emperors citadel.

The X-1 was used by the rebels. Rather, the inspiration came from an imperial walker, which only appear in a single panel of the fifth issue of the Dark Empire II comic, defending the bridge leading to the emperor citadel as said previously.

No I don’t think the walkers had an official name as far as I know they’re unnamed. But Fractal did say those walkers are what he based the storm walker off of.

love it man your amazing

Look at that butt!

Nice I love the comparison shots