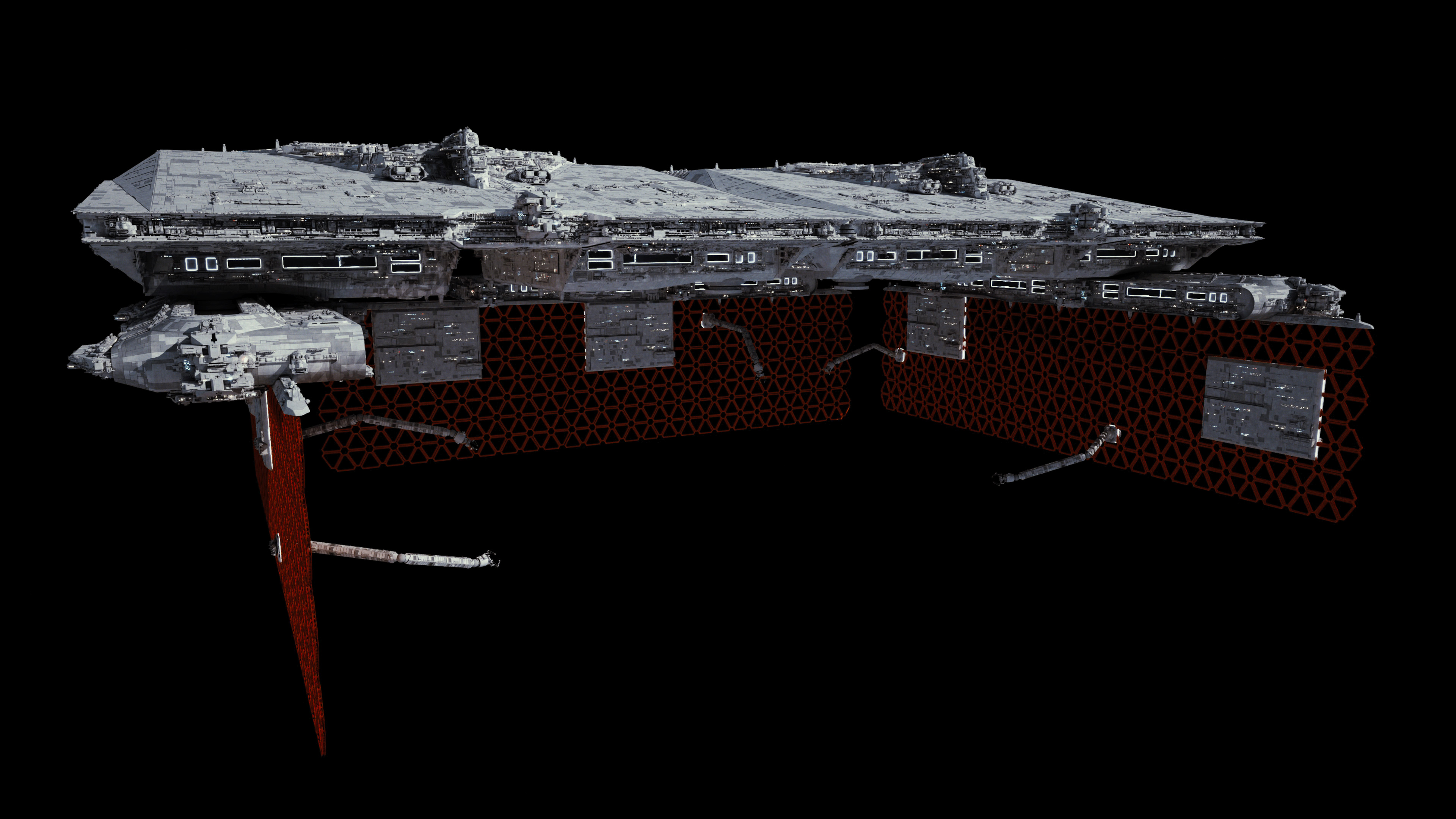 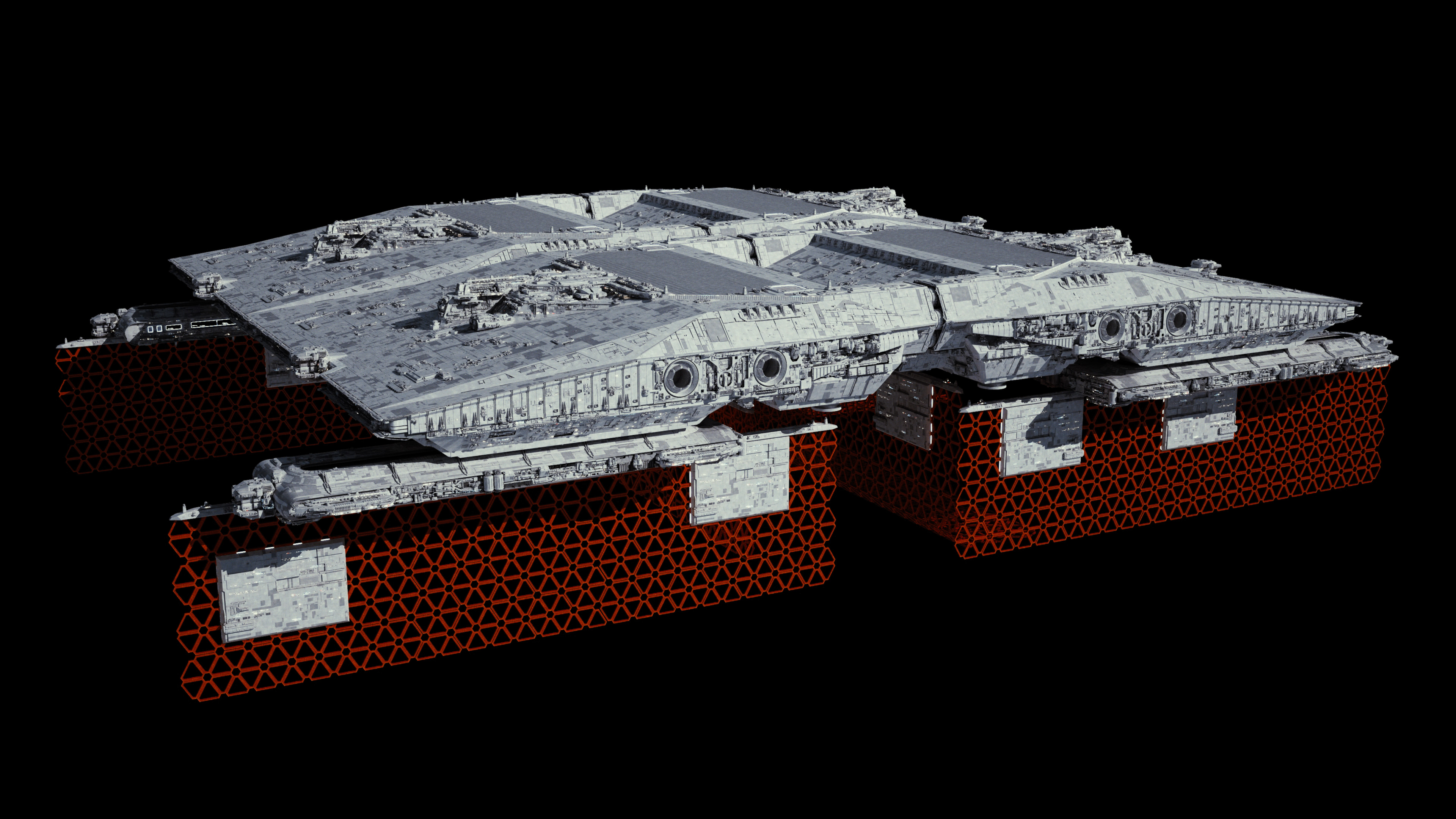 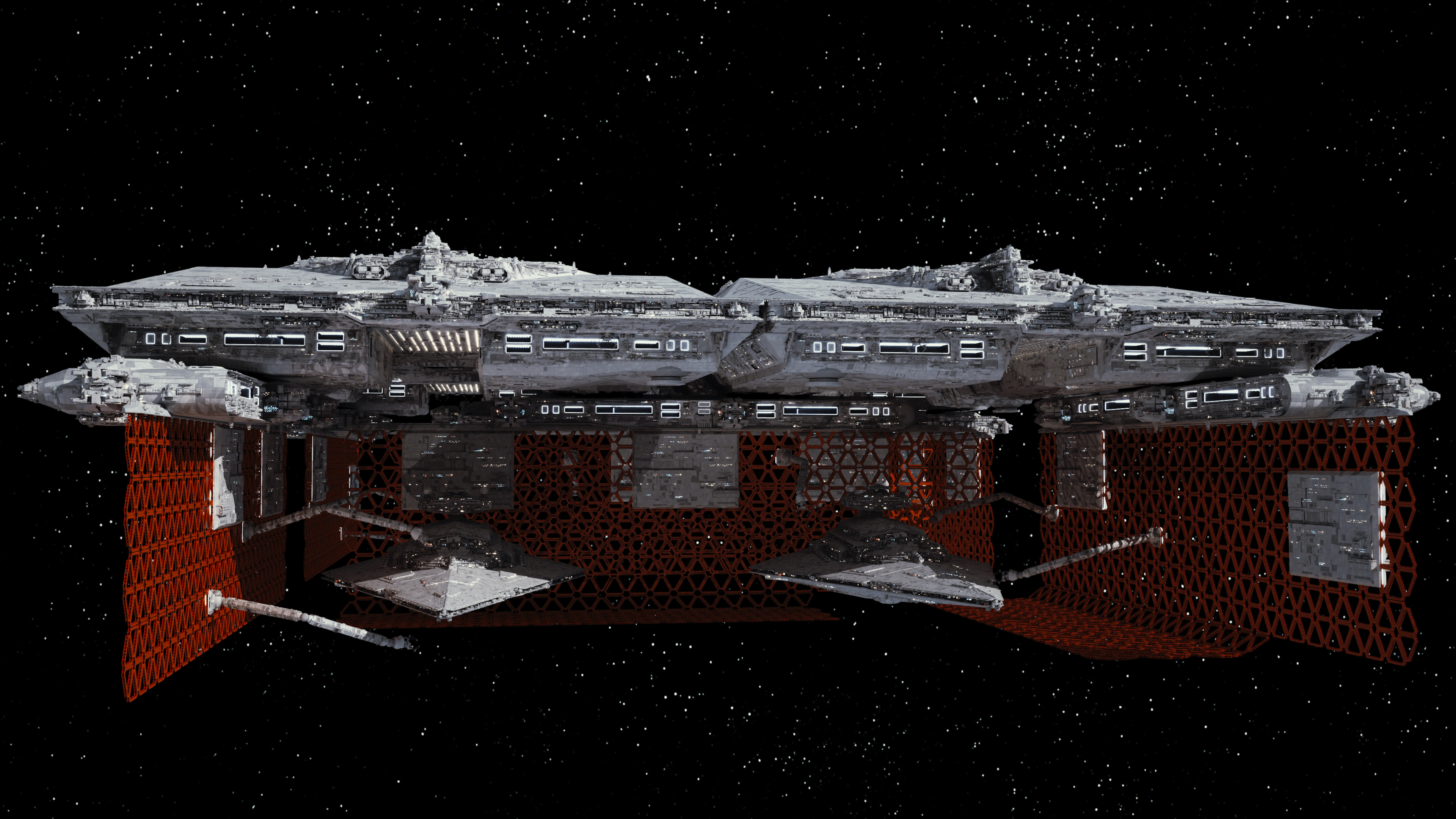 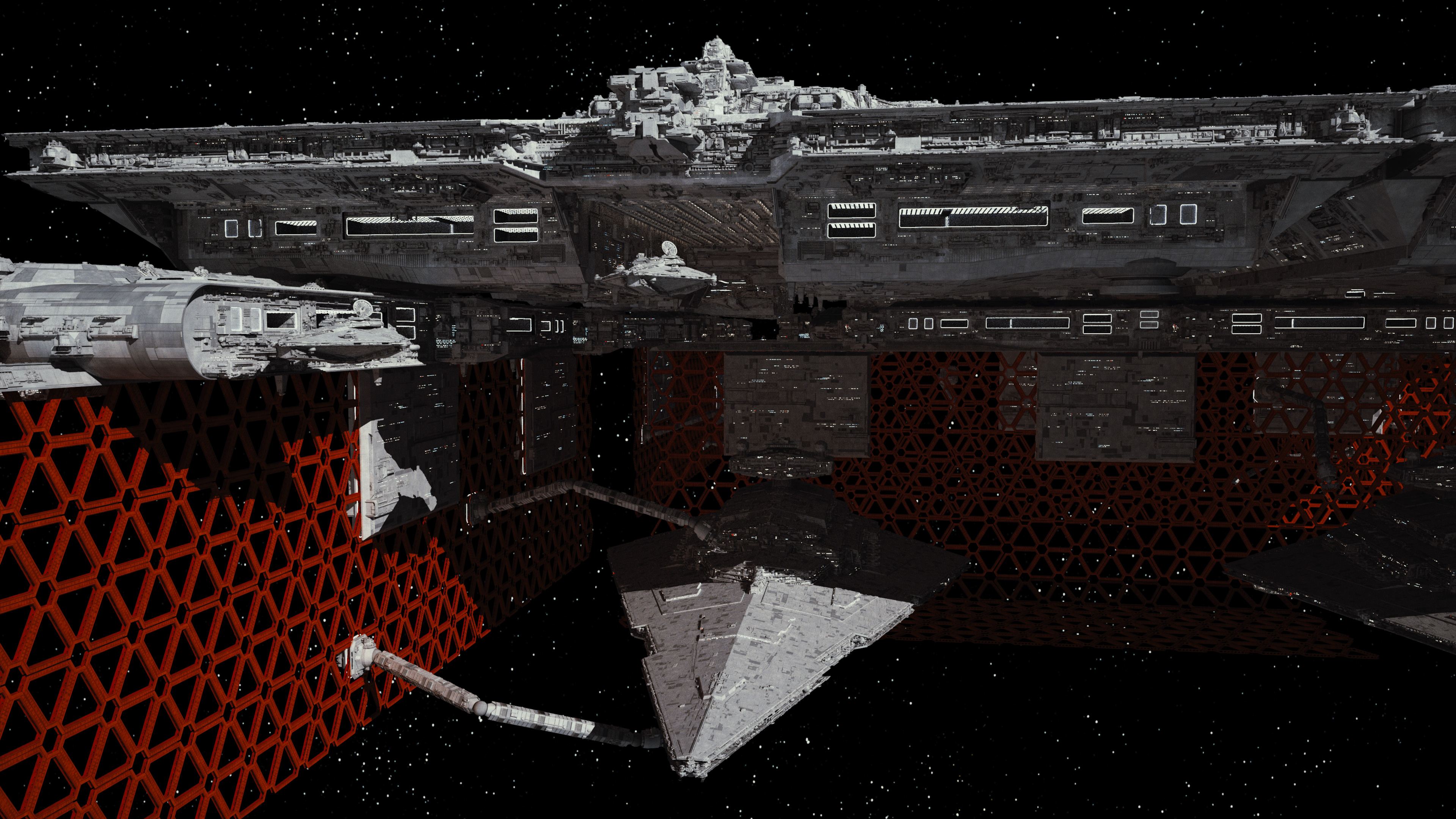 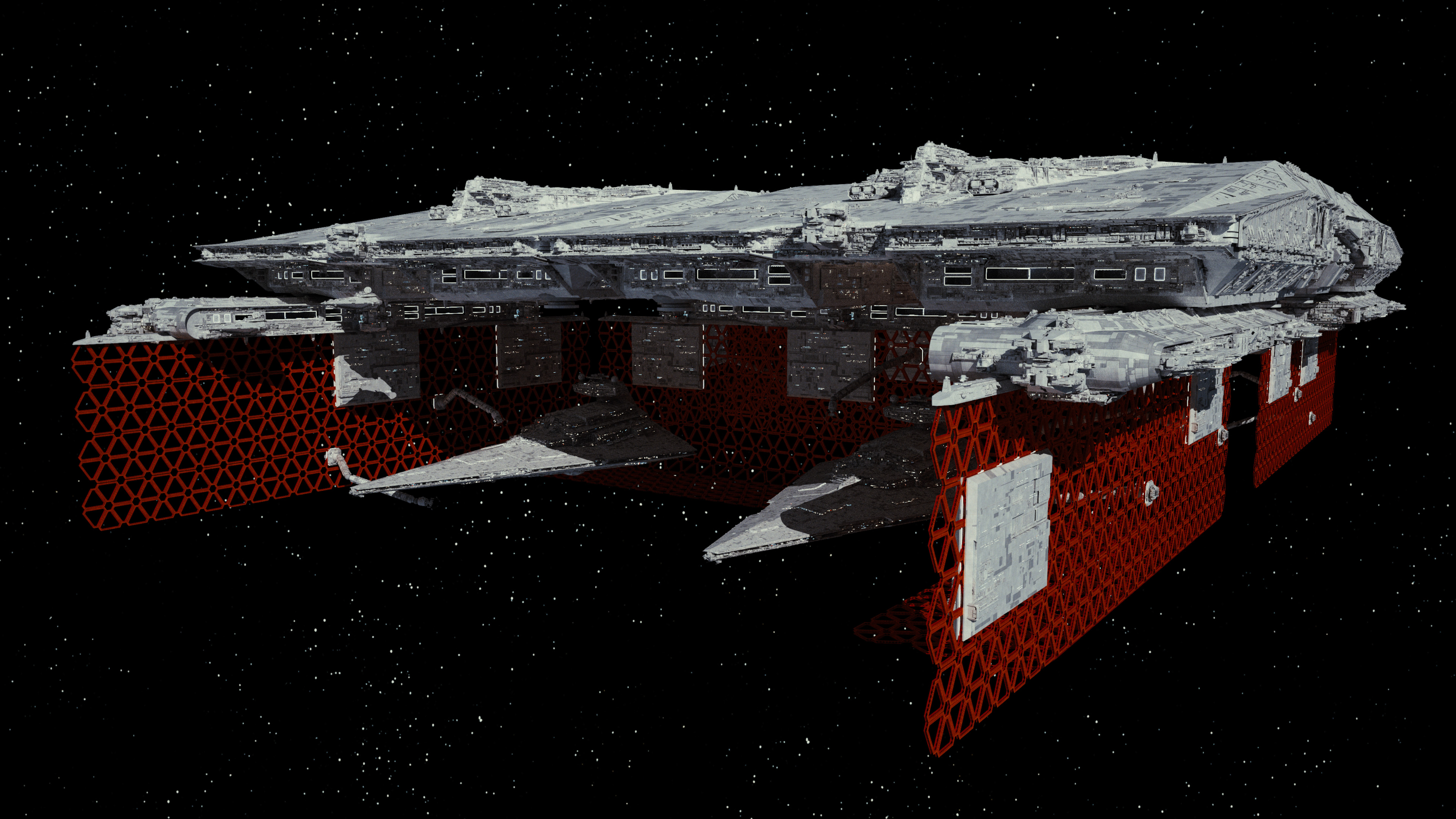 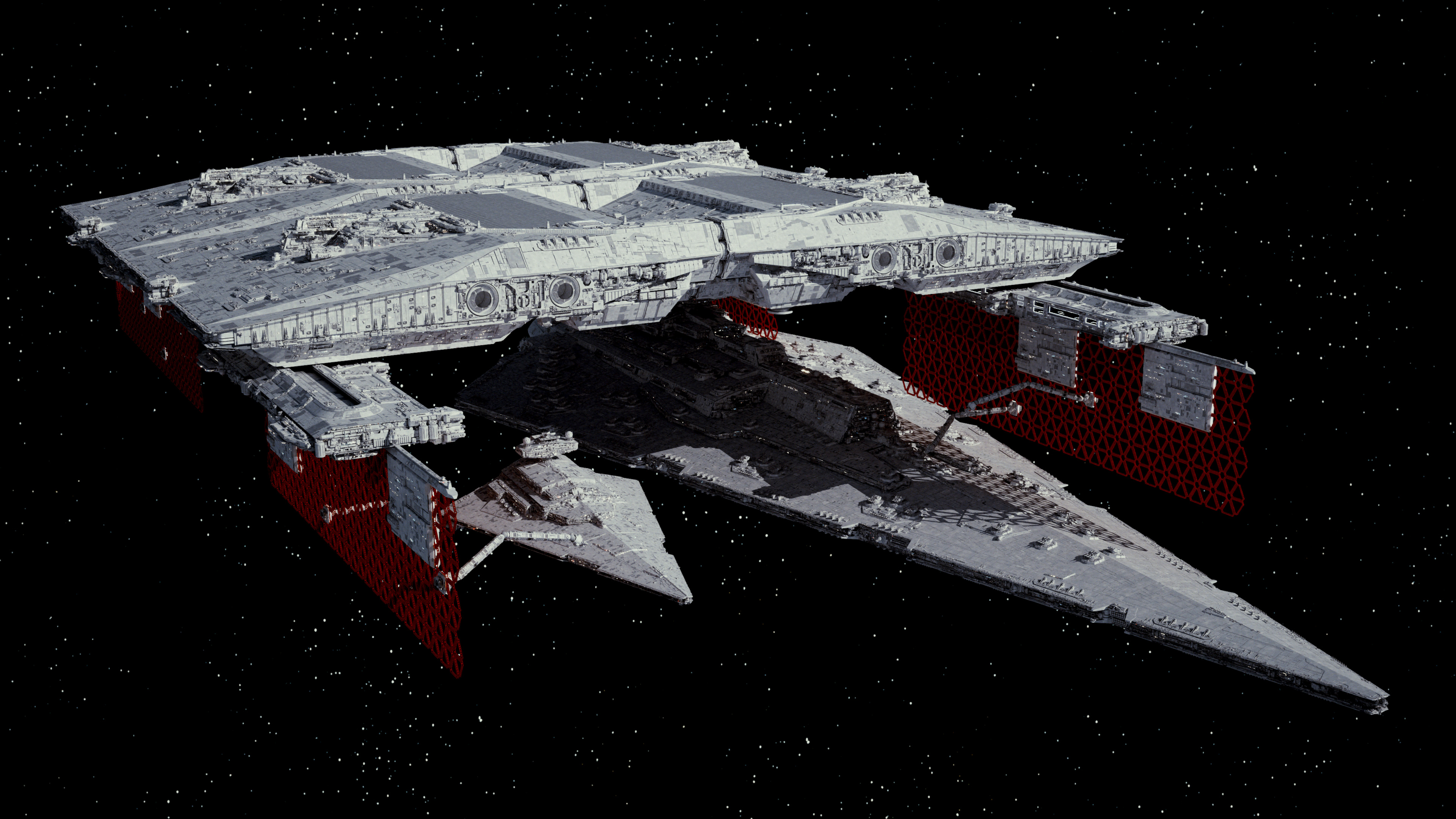 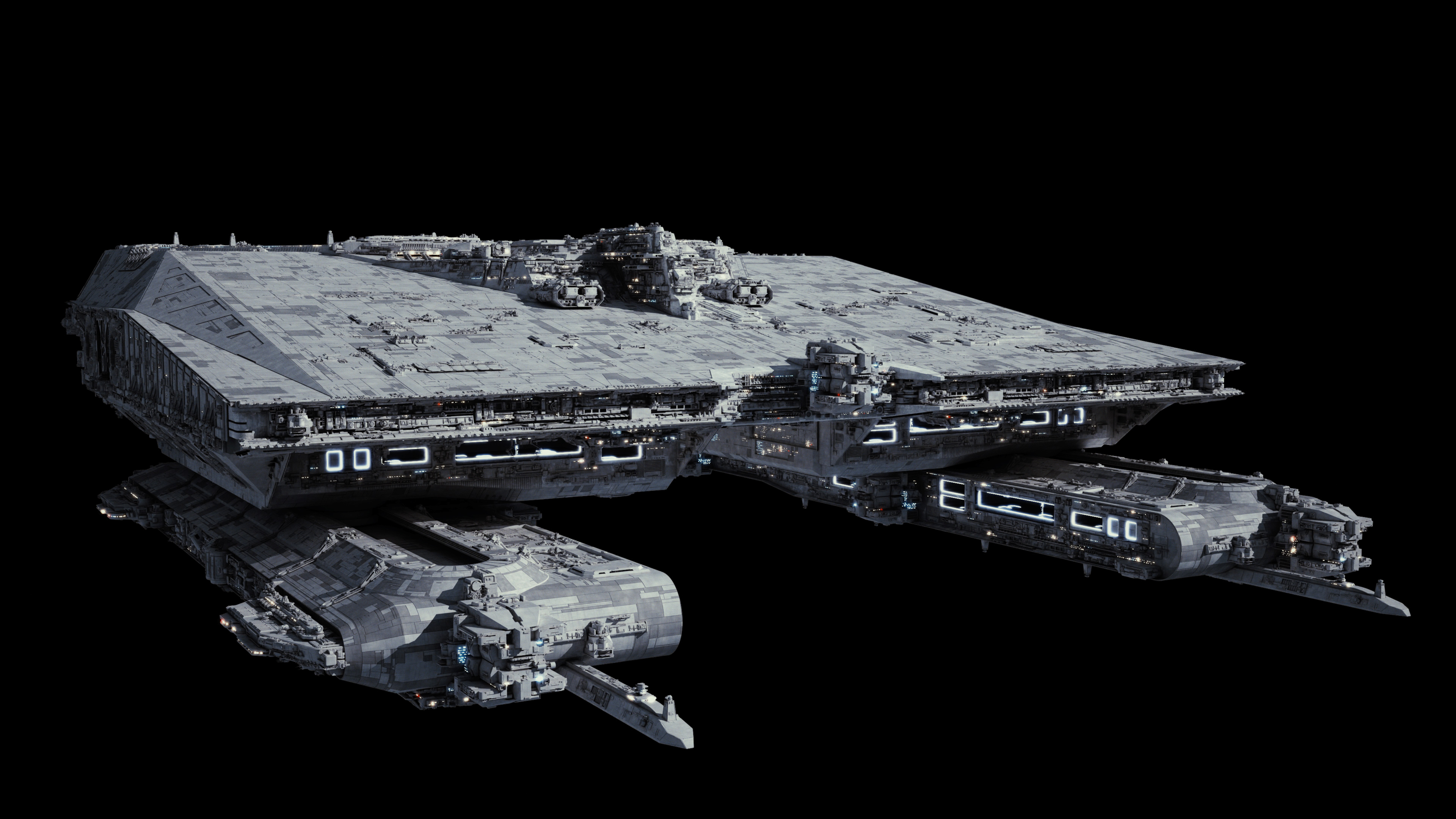 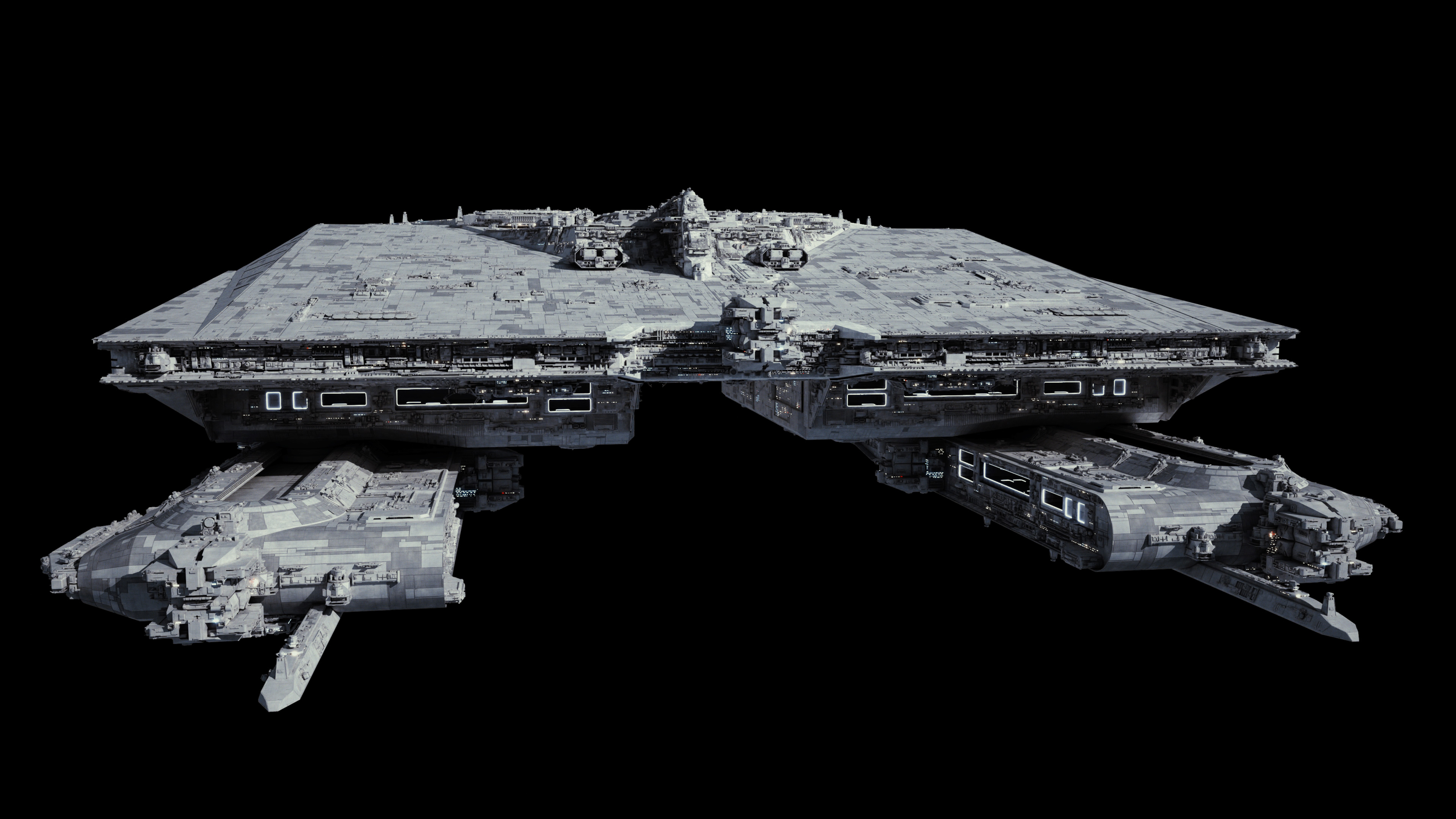 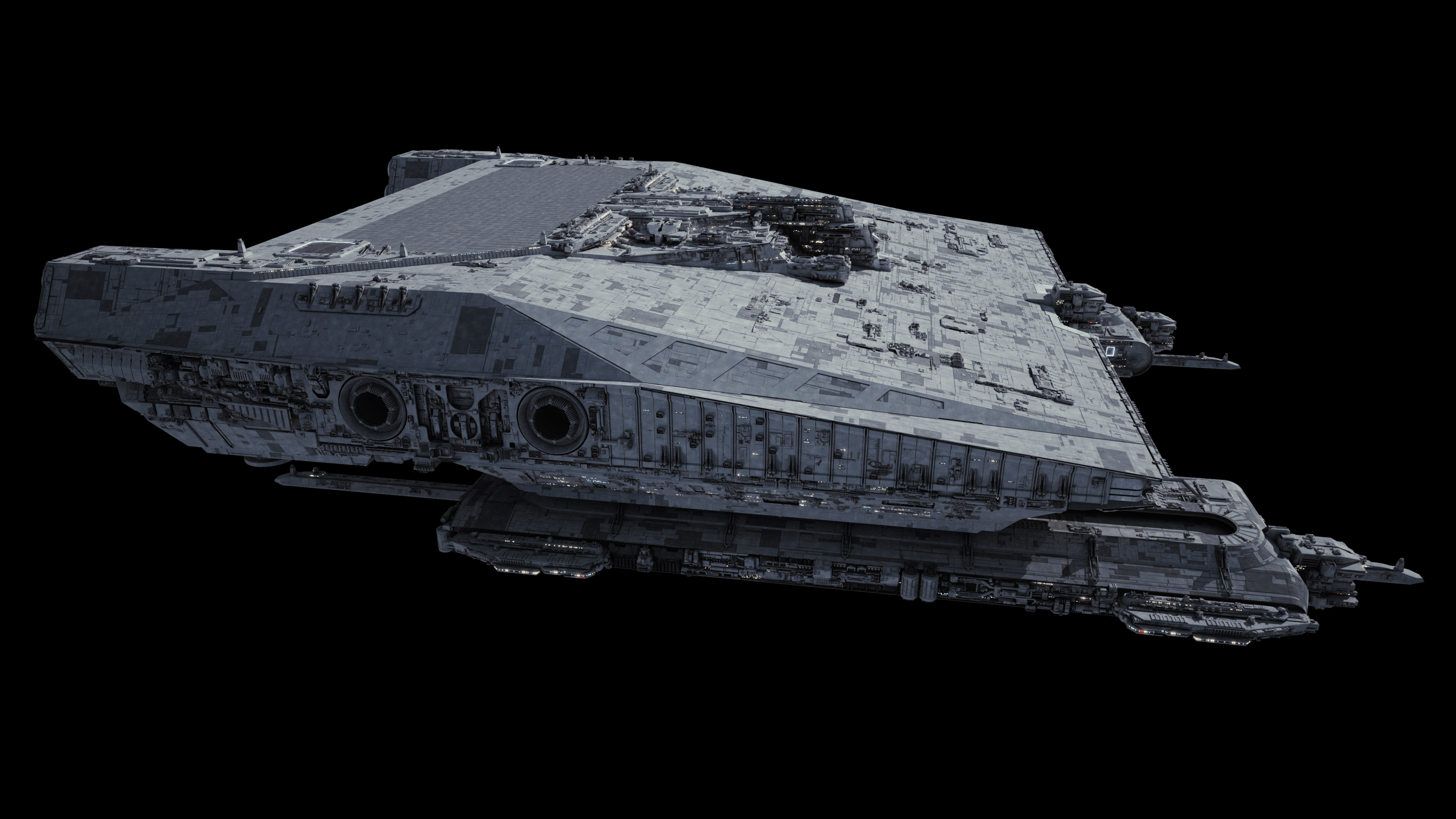 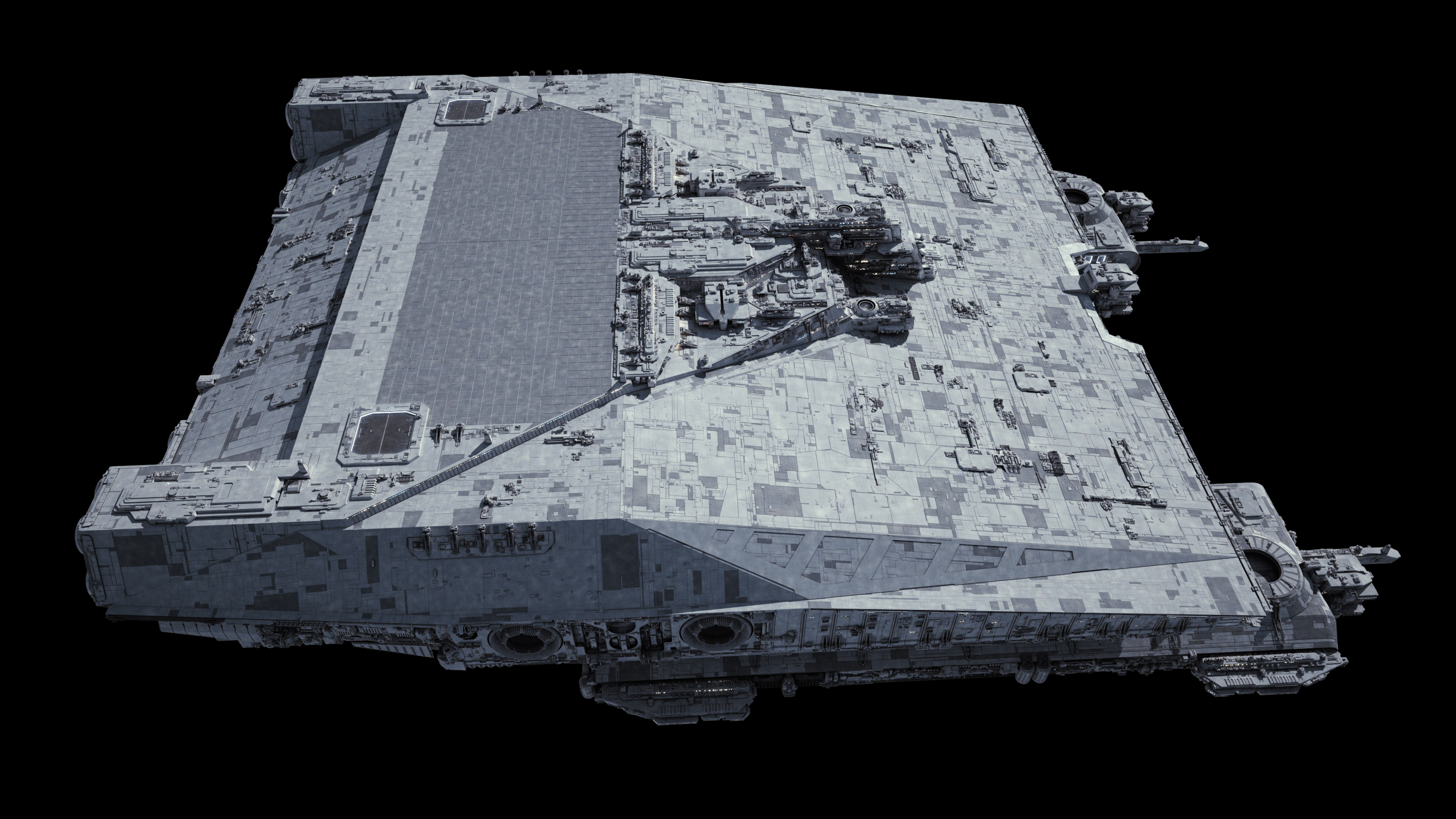 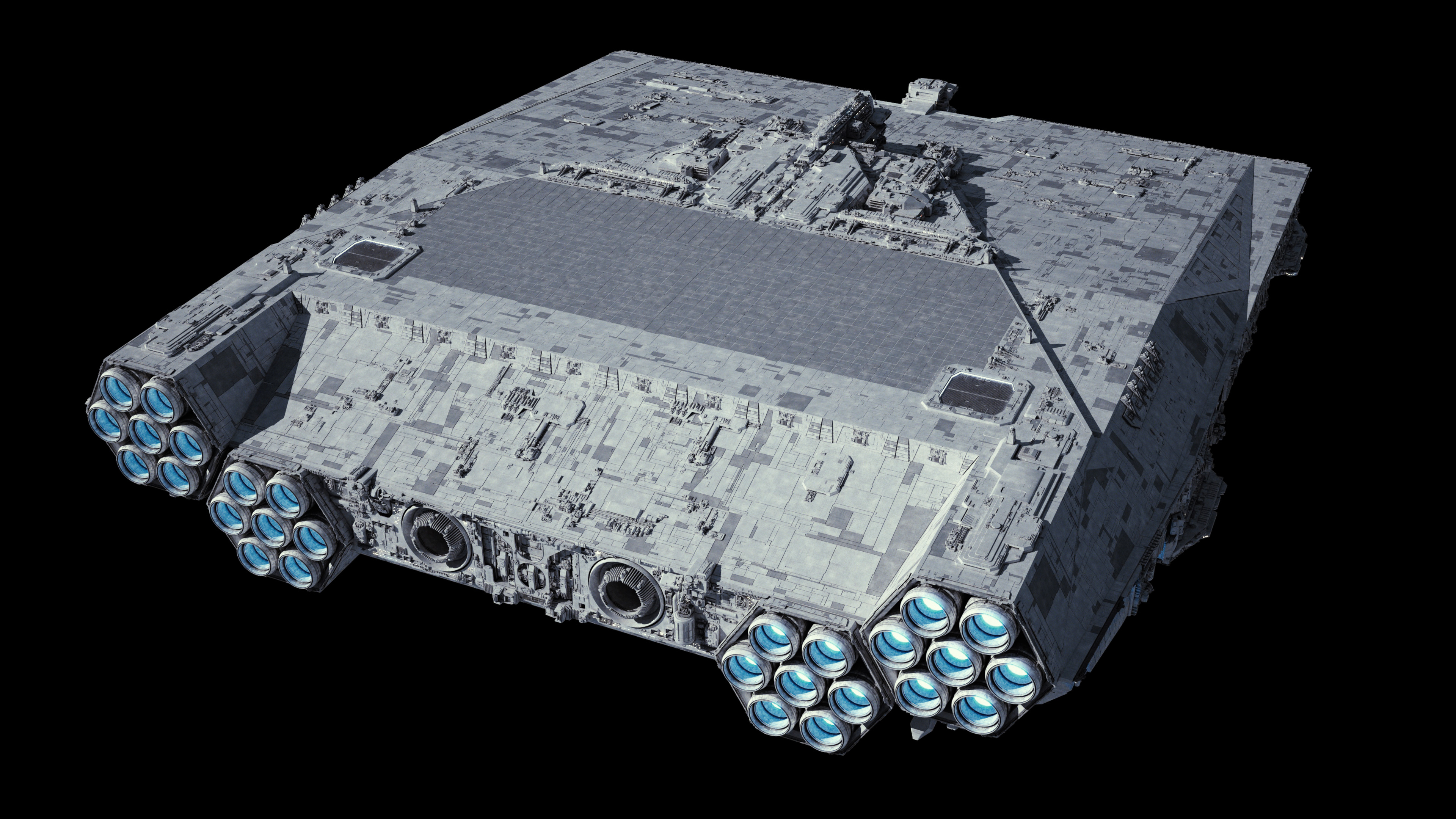 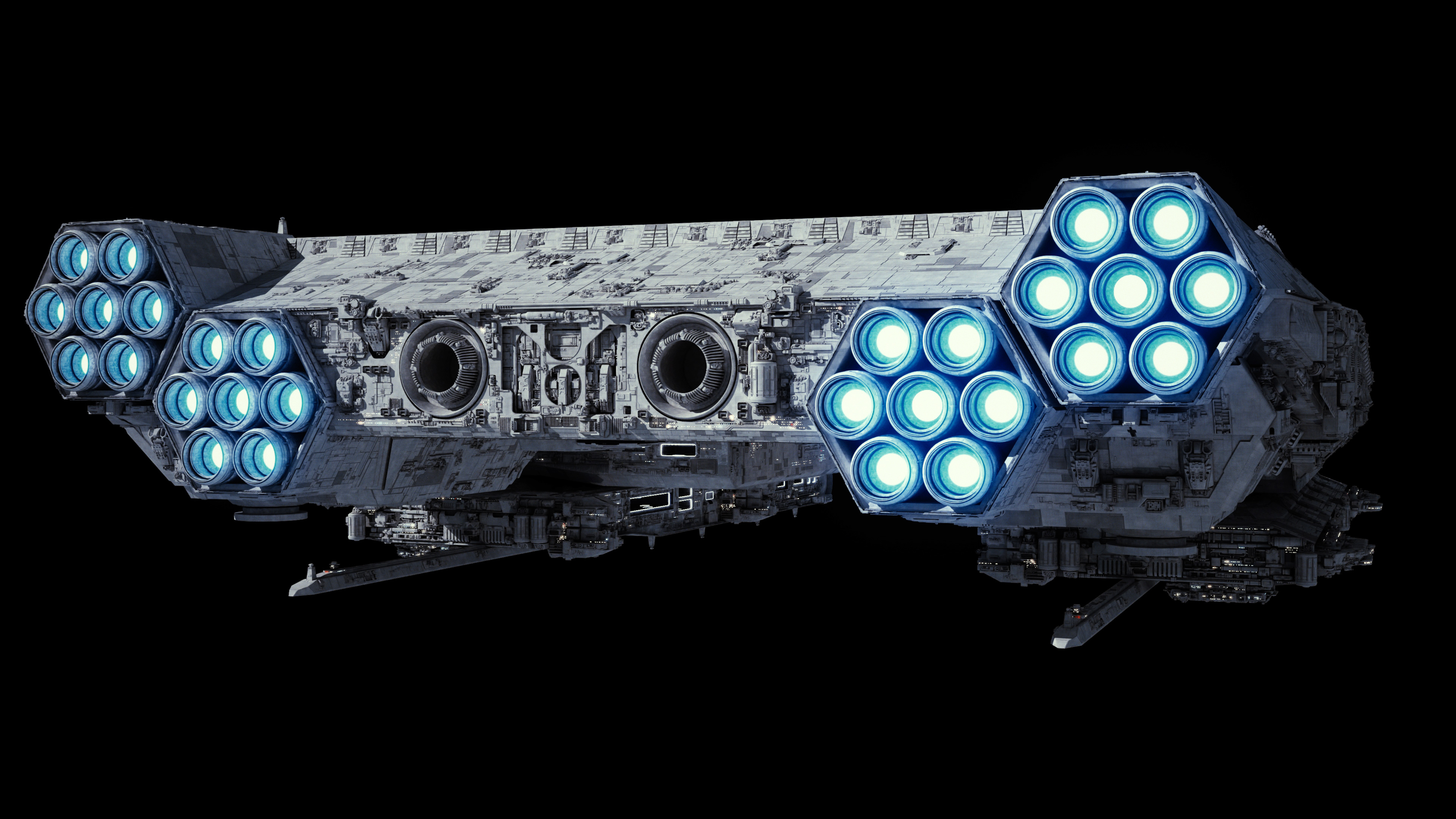 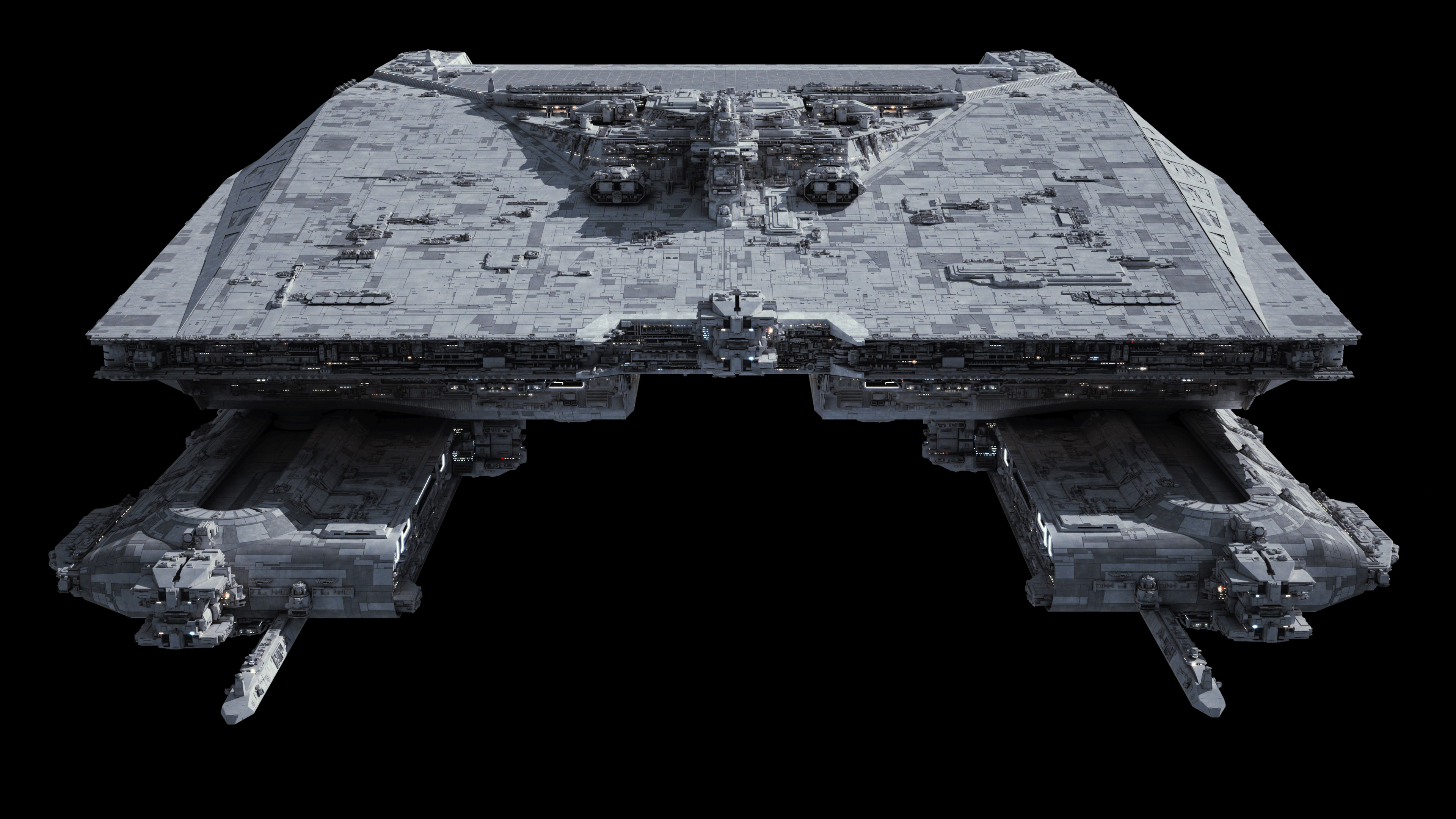 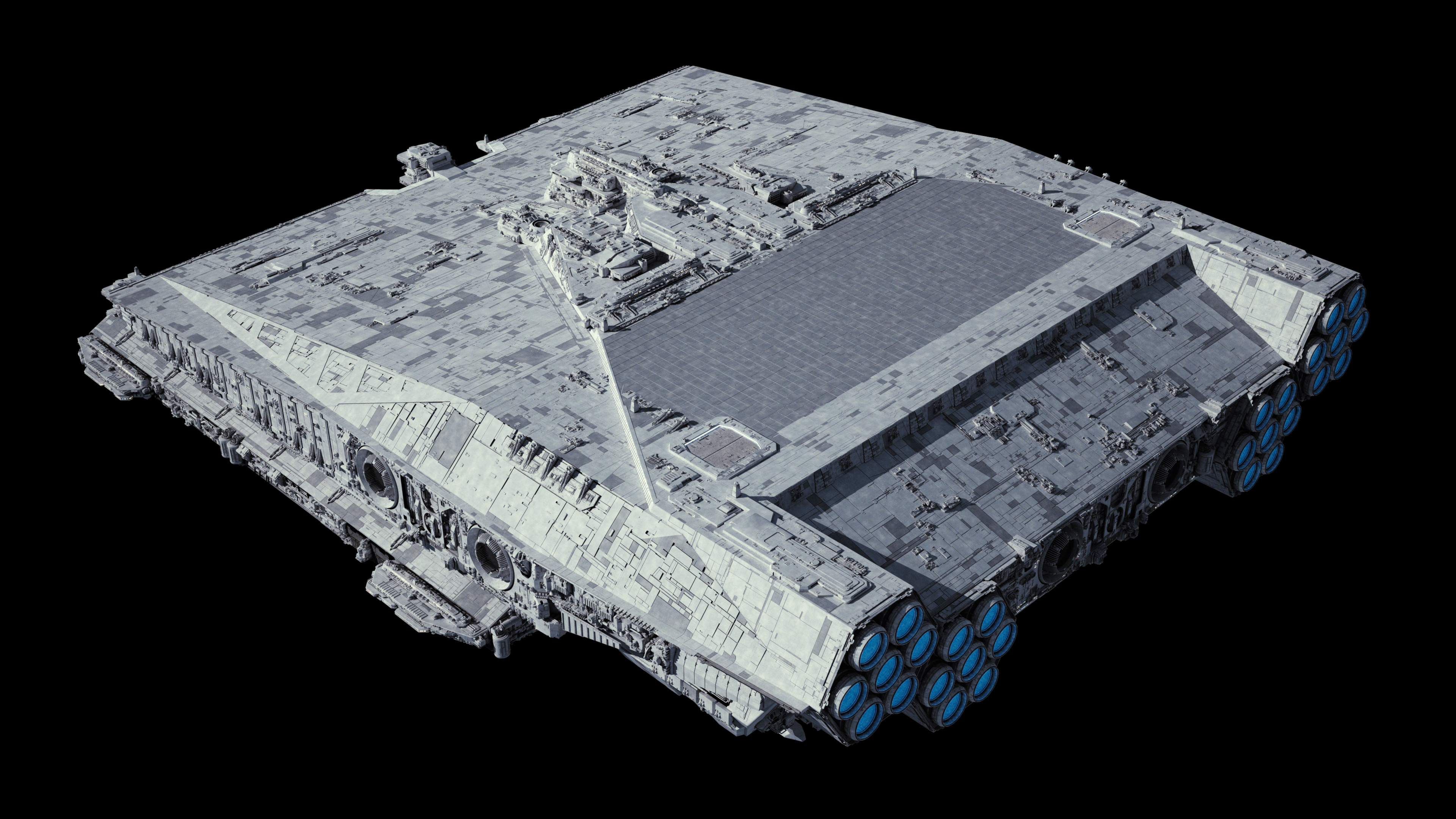 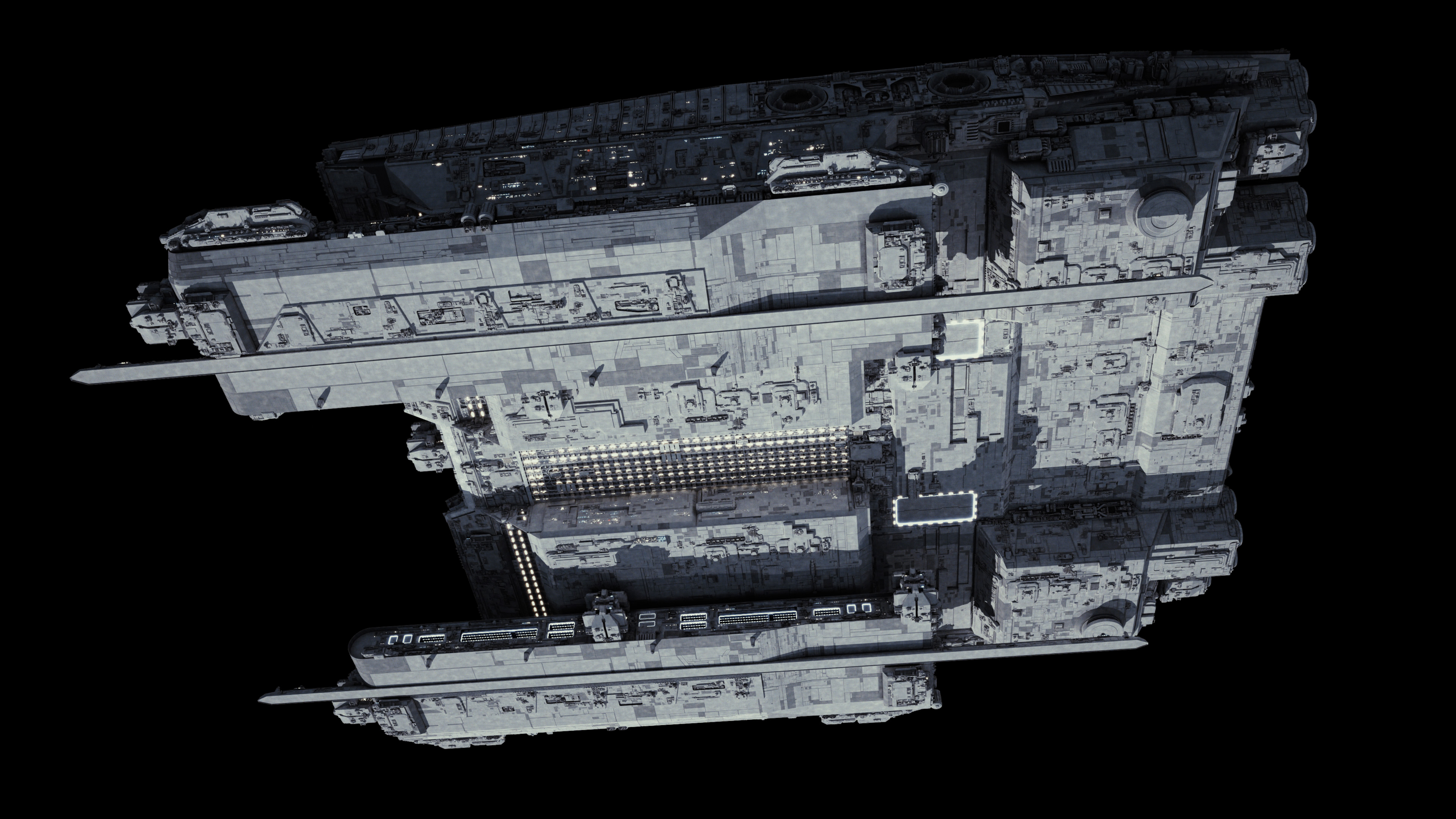 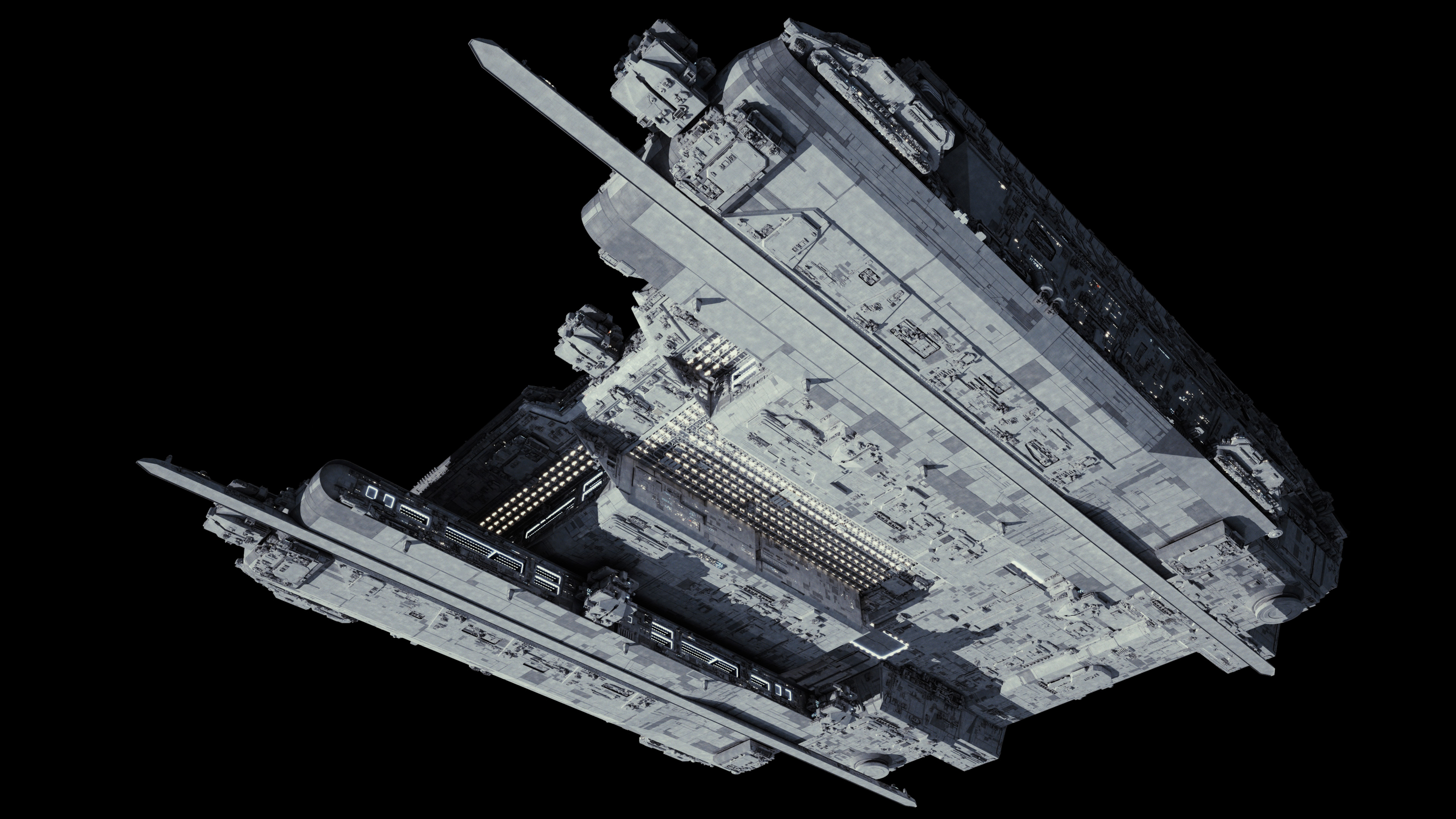 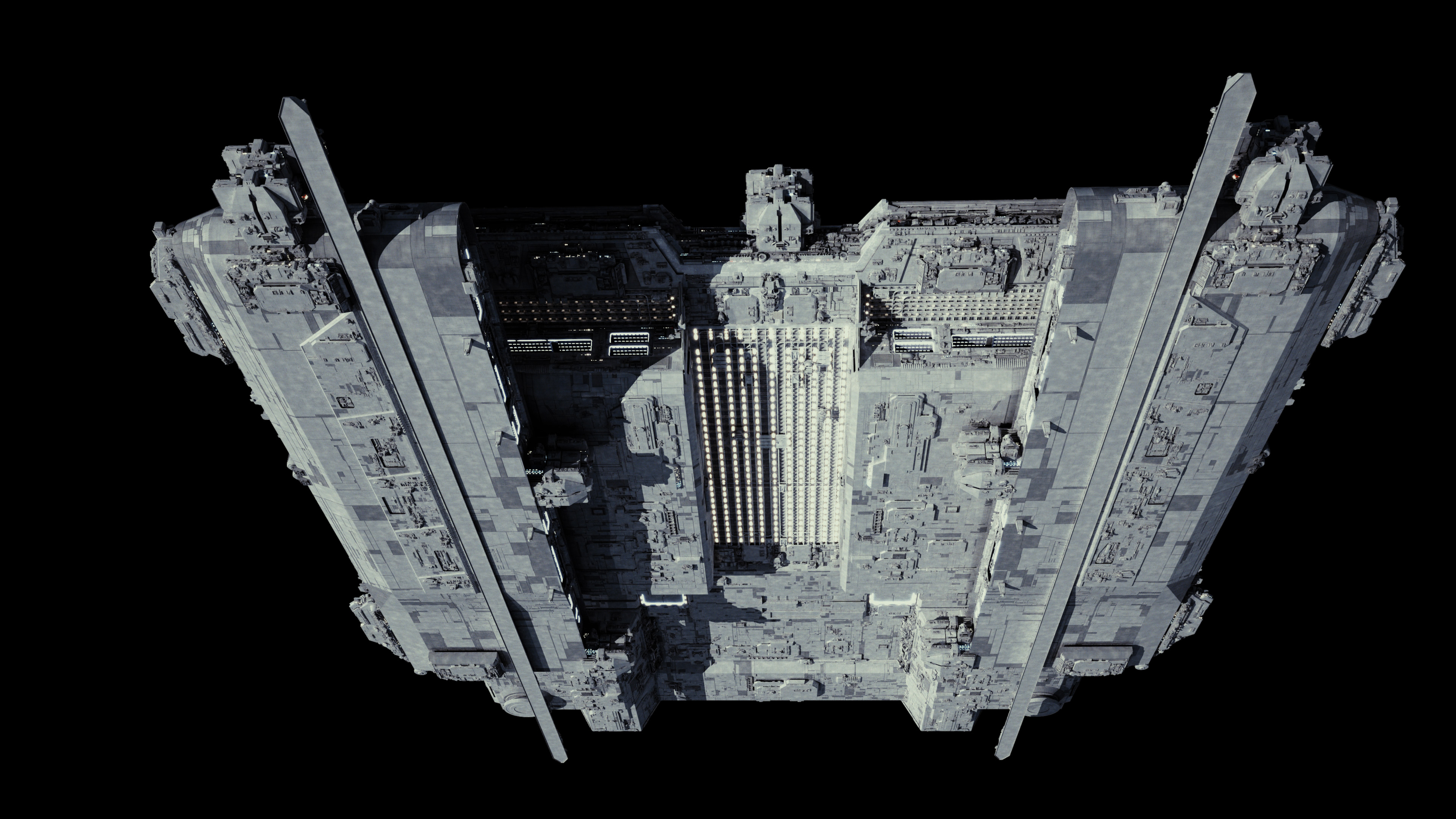 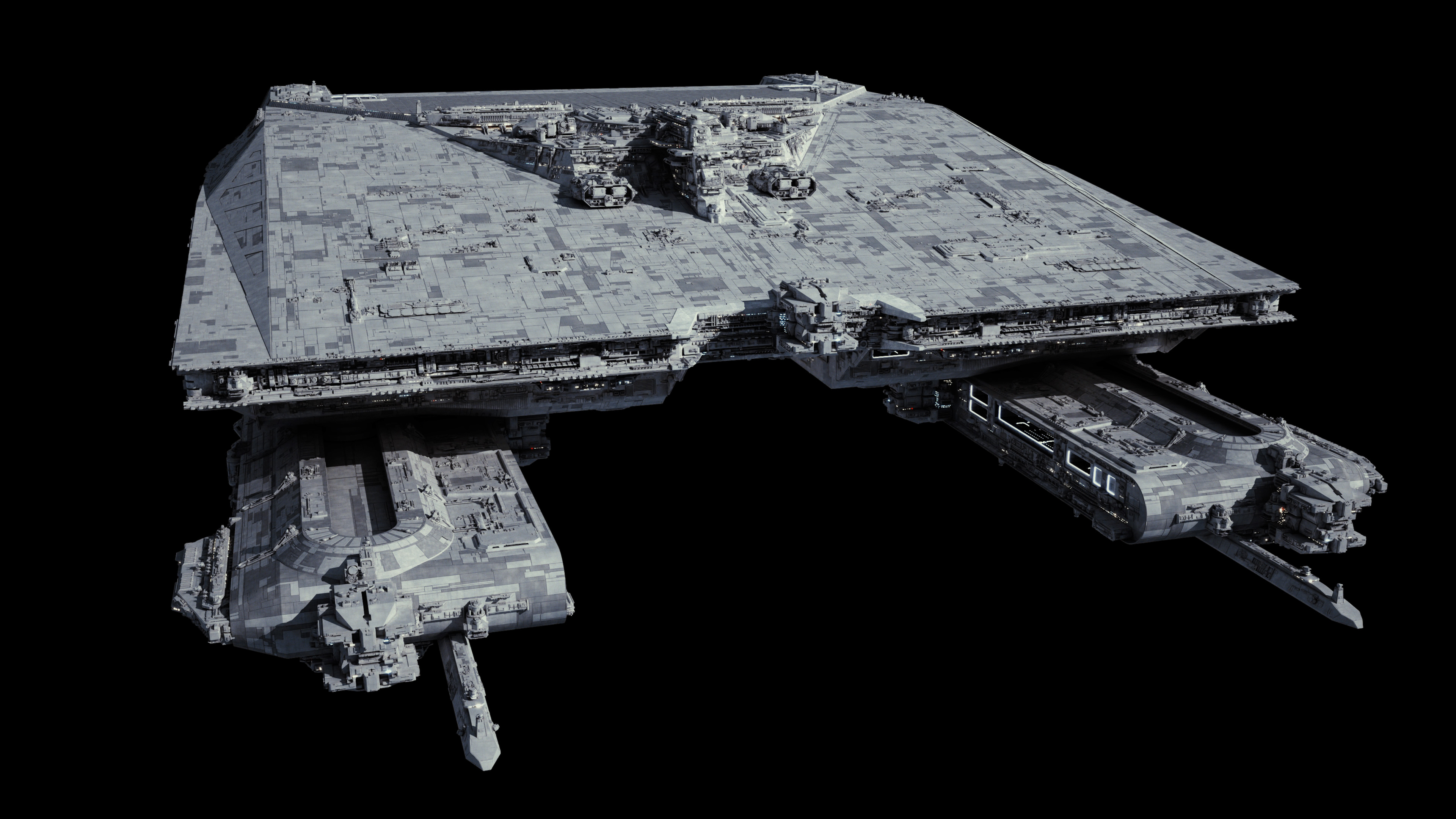 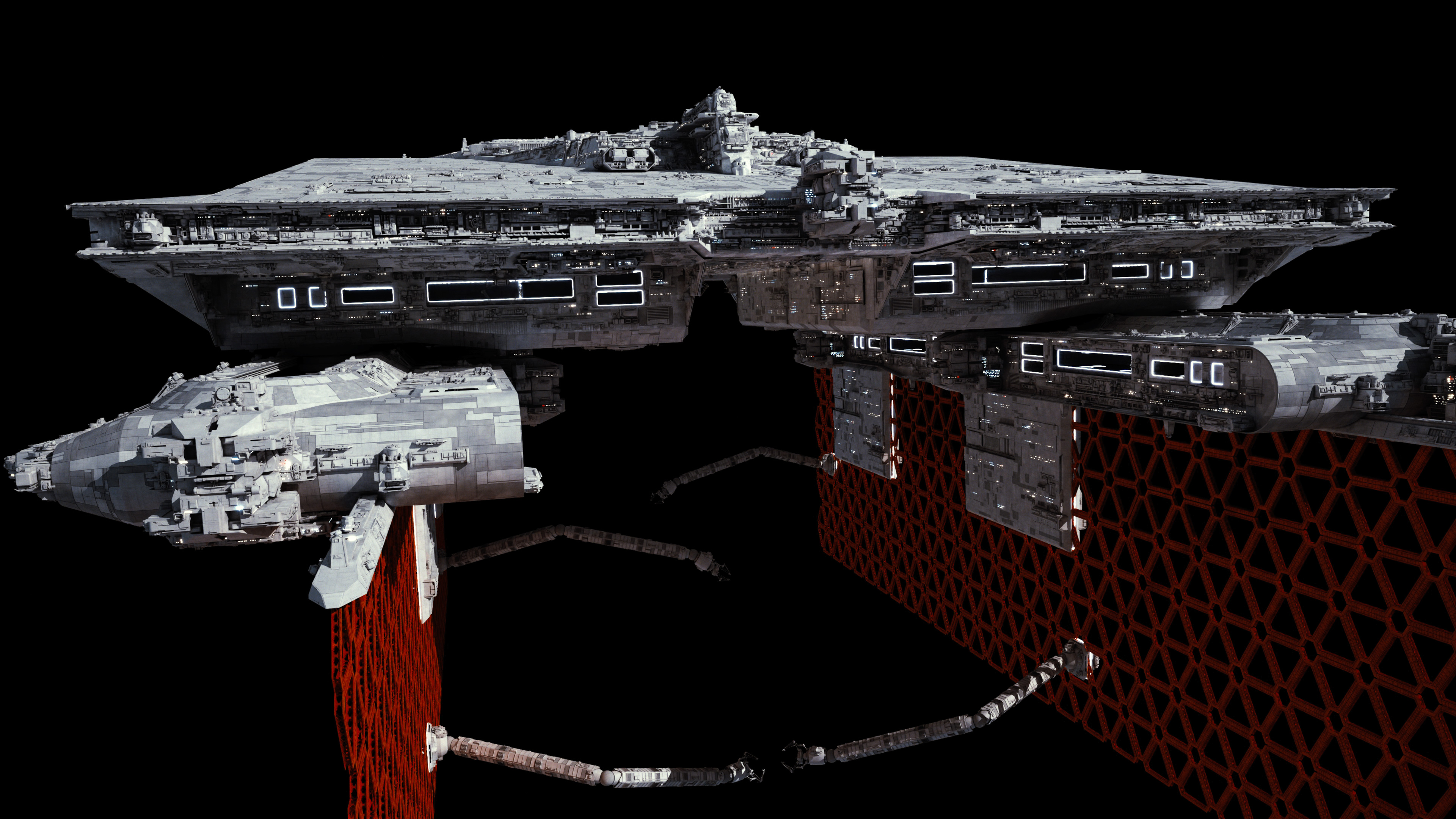 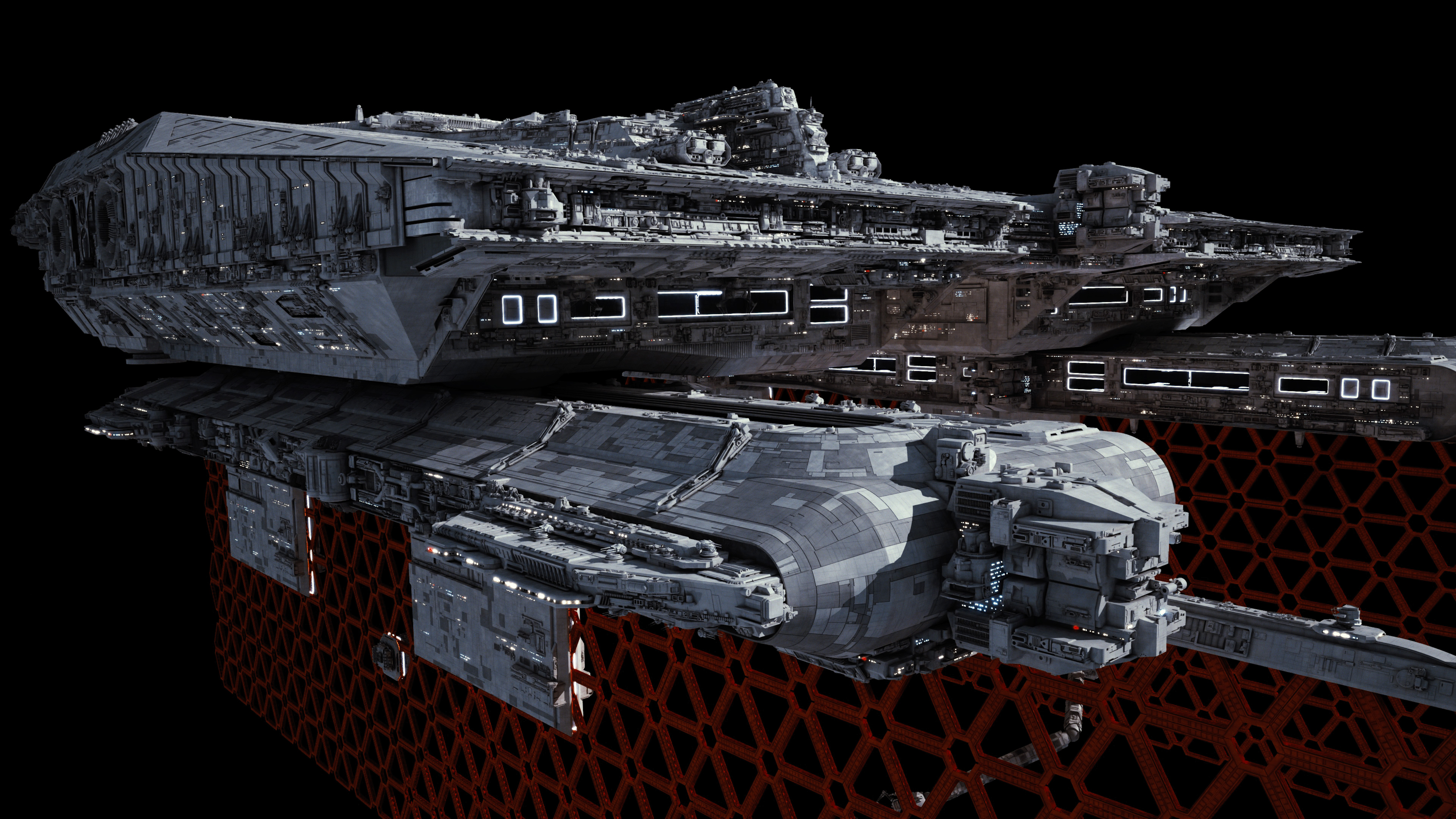 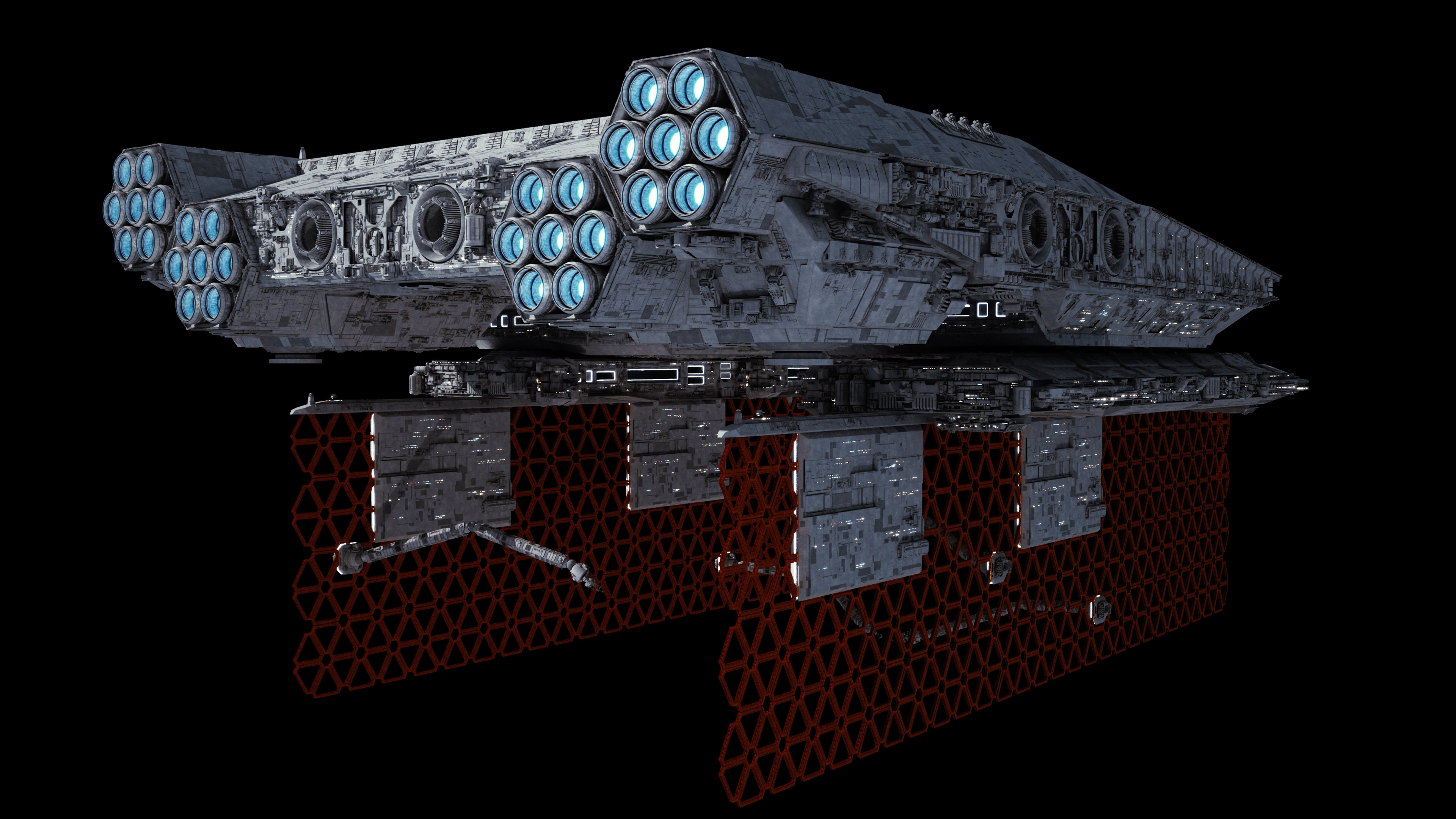 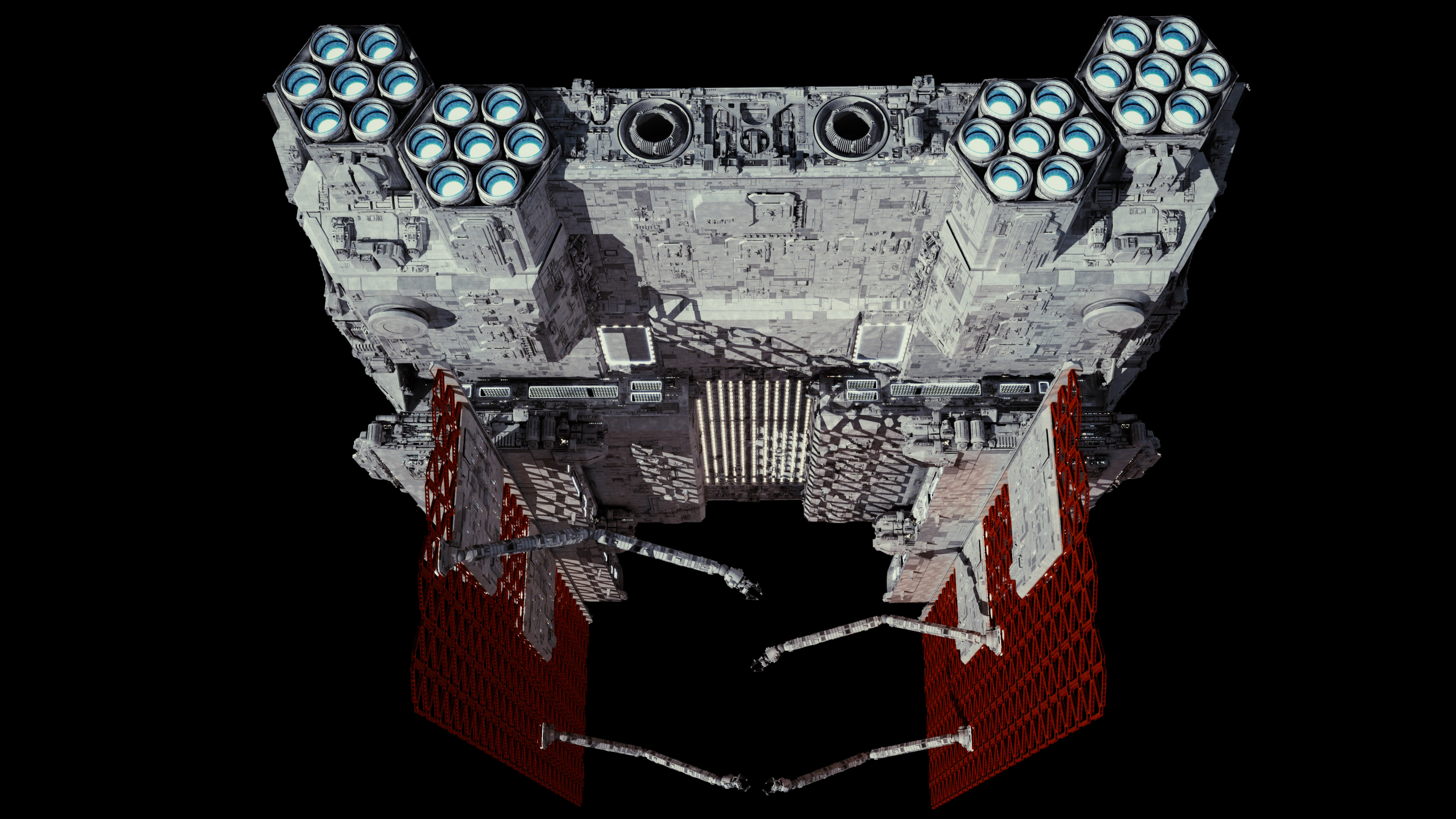 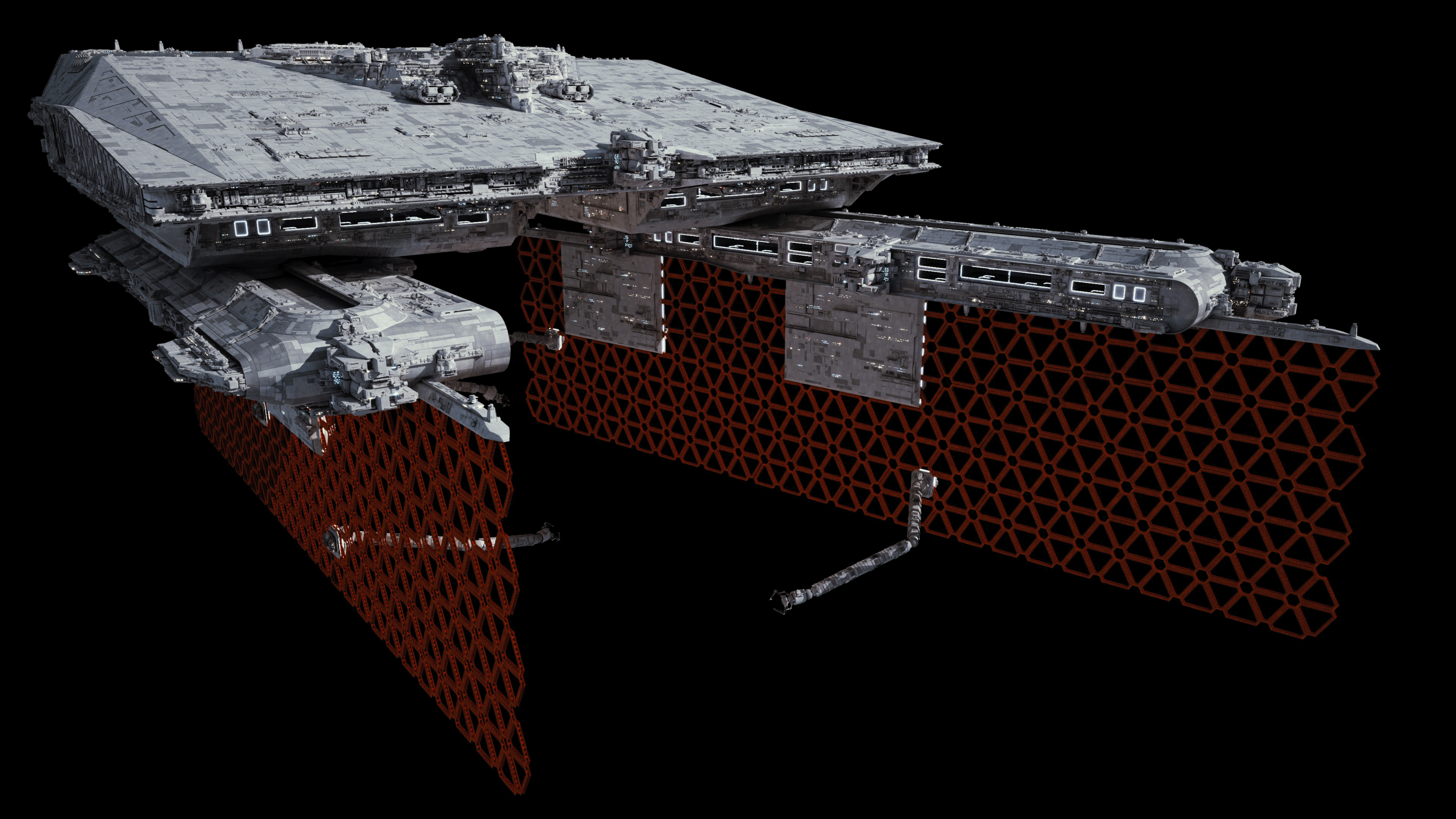 Great design, but I just one question. Where does the red framework that the arms are connected to go? Do they fold back into the dock along with the arms?

They get disassembled or built up as needed, and a supply of the individual units would be stored as cargo when the whole complex moves.

I’m curious if the secutoр
with its wide wings fits …

The Novator’s a modular design, meant to be able to dock to many more of itself to be able to service almost any size of ship in the Imperial Navy. So, I guess the correct answer would be: We can make it fit.

OK so each section of the shipyard is basically and independent mobile dock ship that can connect to others of its kind??? WHAT ARE THE SPECS ON THIS???

Wow what an epic project!

This is amazing.
Professionals study logistics!

yes, Thrawn would absolutely approve! this is the kind of ship Cannon SW needs more oof, the unsung but JUST AS IF NOT MORE interesting specialists. watching these behemoths docking with each other would be AMAZING. I would call my dock ship WD 40 as an in-joke.

For some reason 3Ds Max seems to be able to capture a great Star Wars “feel”. I am making SW ships in Blender, yet it just doesn’t have that particular lighting set. I believe it may be due to different render engines. I wish I could post a photo of the Venator i’m working on, you could give some tips.

How are the manipulator arms re-positioned on the framework? Are they on a rail system or do they have to be dismounted and moved manually?

They can slide on tractor/magnetic clamp systems.

I had to look that one up. Seems like they are both pretty similar in concept, except that this is modular, and the Harbor isn’t. Though a Harbor is bigger than one of these units, get enough Novators together and you can handle stuff a Harbor just can’t.

so what is the capacity of each individual ship/section? looks like roughly a single ISD sized ship or maybe an Alliegence class battleship? it looks well-defended, no surprise as the rebels would love to borrow one of these with the ship in tow. can it use hyperdrive or move with the dock scaffold deployed?

what are those holes in the side and aft of the ship?

They are connectors for when multiple units attach to one another. Allows for the transfer of material and power across multiple units.

I was wondering: Is this just for repairing ships or can it construct new one too?

It can do both, but it sort of depends on what kind of associated workshops and foundries are present. The ship is just a frame work and mobile space for equipment. What equipment you put into it will determine exactly what it can do.

Some tech questions:
– how many modules may be connected to eachother? Any restrictions?
– Can one module construct ssd with time efficient?
– size of the crew?

No restrictions on number of modules. Construction depends on what kind of equipment is carried. I never make estimates on crew because I feel like it’s very hard to estimate.

Can’t argue about crew estimation:) just some professional deformation with questions:)
What class of hyperdrive it uses? I think second or third, if any.

not much point in a mobile dockyard without hyperdrive to deploy it to distant systems. I’m guessing it would be a class 3-4 as it probably jumps and sets up shop for a long haul. it would be amusing to see these things making more of themselves.

Based on what other mobile space docs and space stations have, I’d say a class 3 would be more likely.

I love the design. My only quibble would be that mounting them tail-to-tail essentially immobilizes them, whereas docking them nose-to-nose would allow them to retain some main drive functionality, sort of like the Field Secured Container Transport.

When it’s assembled, it won’t be moving. It doesn’t transport ships beneath, but moves to where it can set up.

Okay. I was picturing this either as your version of the Deepdock or as an SWU equivalent of a self-propelled floating drydock.

I’m not sure if we’re disagreeing? It is my version of the deepdock. Self-propelled floating docks don’t move with ships inside under service – they move to where ships need their services, and then the ships dock there while the dock is moored. This would have a similar operating paradigm, whether it is a single unit or multiple connected units. I would expect the connected version to be stationary unless the modules are disconnected, but even as a single module I wouldn’t expect the unit to move with a ship underneath it.

I always pictured the Deepdock as something along the lines of a single massive unit – with multiple docks attached to the central structure – that was still capable of relocating even with ships in the docks. That ability to stay mobile would be the off-setting advantage to the added expense and complexity when compared to a more conventional stationary shipyard.

That would be something like a floating transport dock IRL like the Soviets used to use to move submarines under cover through the inland waterway system. I would separate transport from servicing. For one, it’s space. Orientation, and very precise and stable orientation for some operations involving really quite massive objects, will be super important. It’s not something you want to mess with by having either the dock or the ship under it move. The mobility of the dock is strategic – it means you can have a functional shipyard/dockyard anywhere, including deep space, not that it would be mobile as it’s working. If you need to move an immobile ship, have tugs or an FSCV variant carry it.

The added complexity of making the dockyard mobile is pretty much just an engine bank and a hyperdrive. Otherwise it might as well be identical to a part of a stationary shipyard.

Fantastic. Will you make deployment animation?

That’s actually a pretty substantial engine bank. How many g do you reckon it could achieve?

Depends on how much it’s got to carry. I can’t imagine it’ll be super fast, maybe in that 2000g “average” space.

This is a awesome model. Would a great mobile base. Can you make a imp.escort carrier. I think your model would rock.

He already made the ton falk one

this really goes well with an idea I had about old Lukrehulk Class ships operating as mobile docks in a similar way. a luckrehulks is perfect for such a function as is. the rings could easily be adapted to dock a variety of ships and the main claw arms would be great for servicing larger ships.

Hooooooooooly moly! This is stunning!

Damn this is awesome.

One of the most valuable ships in the fleet.