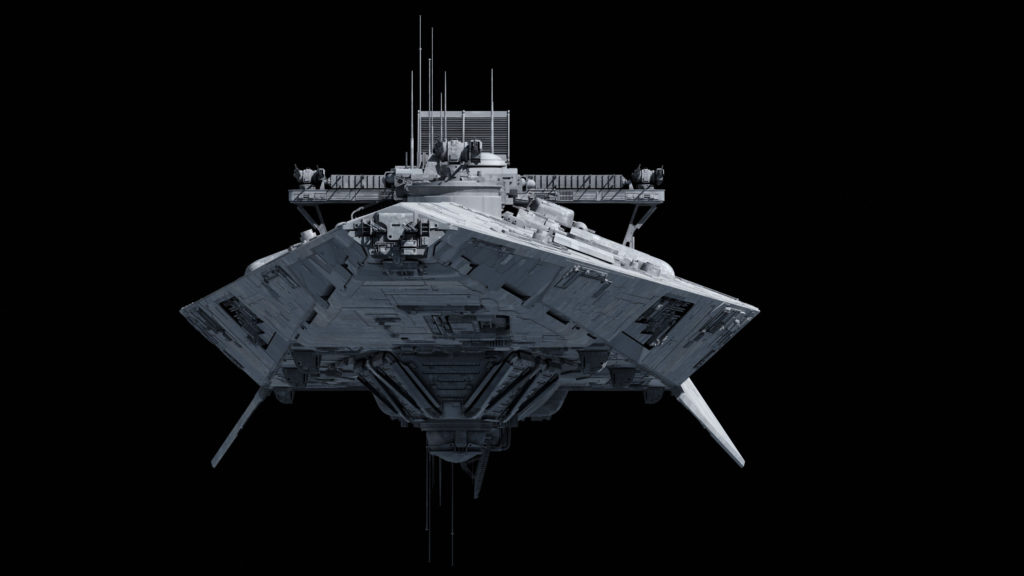 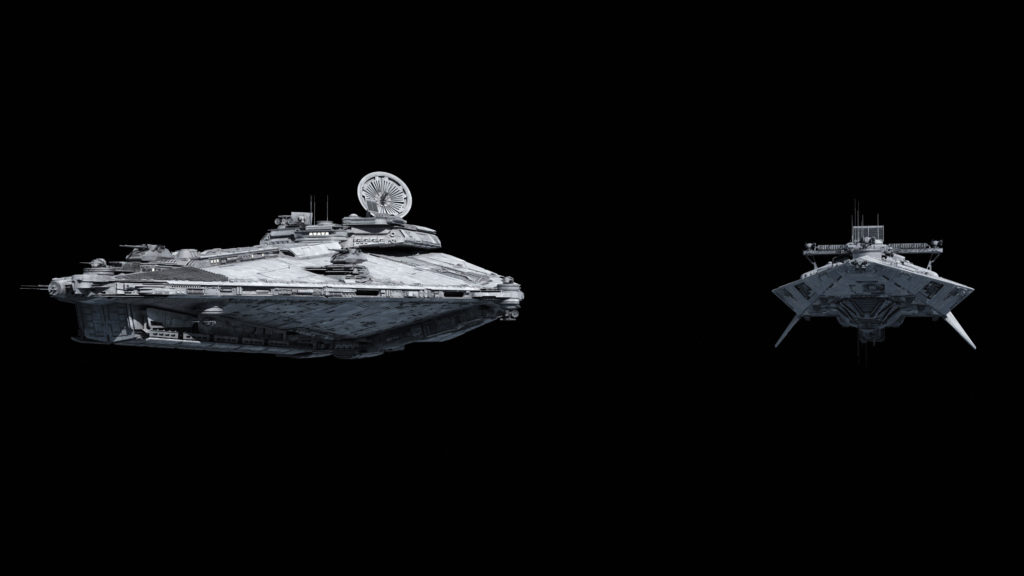 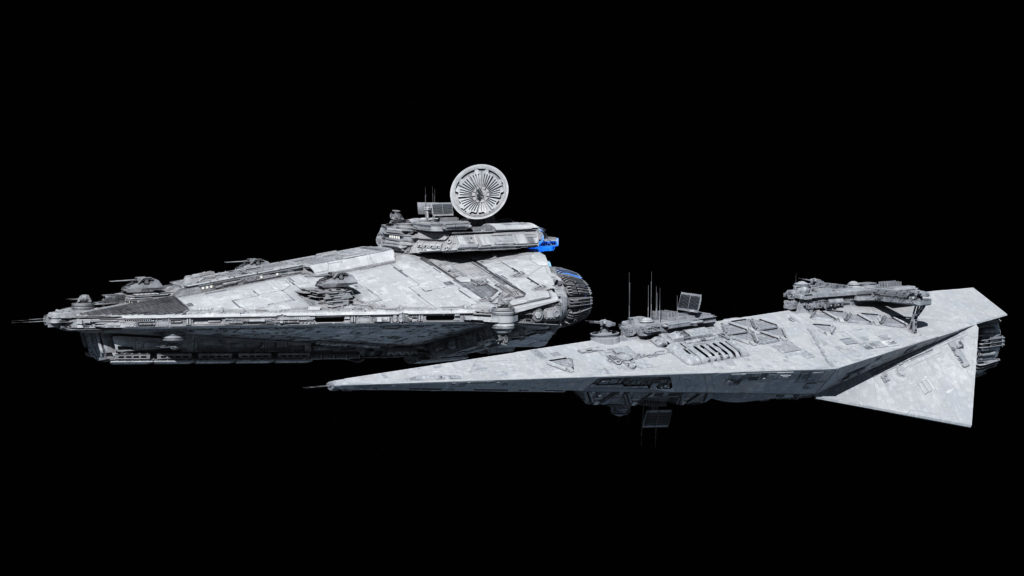 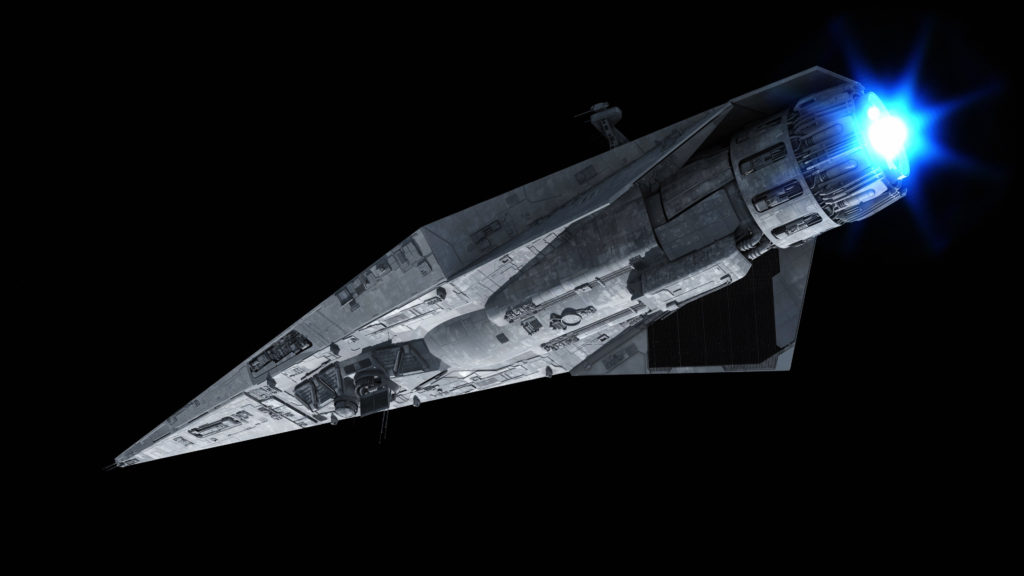 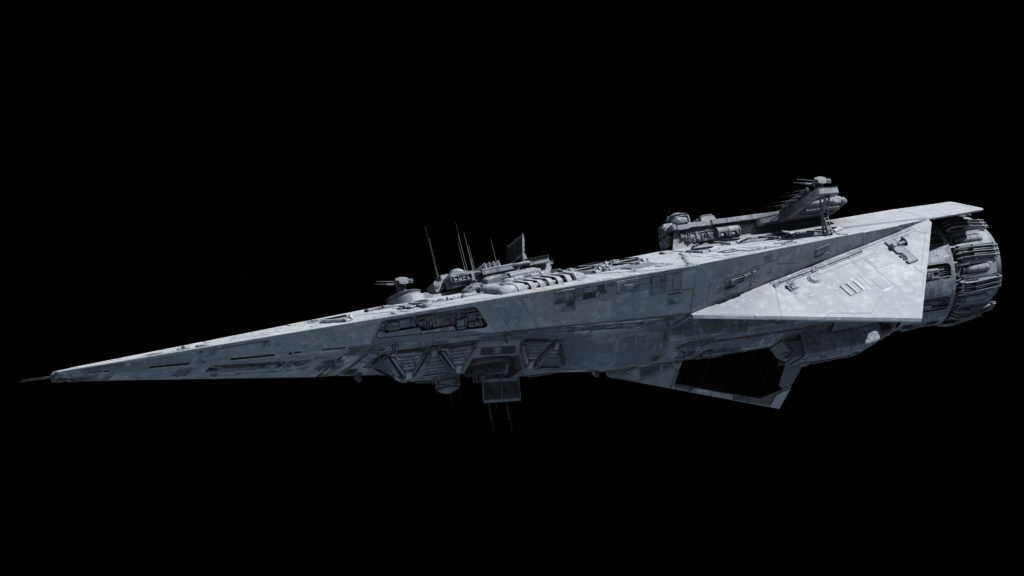 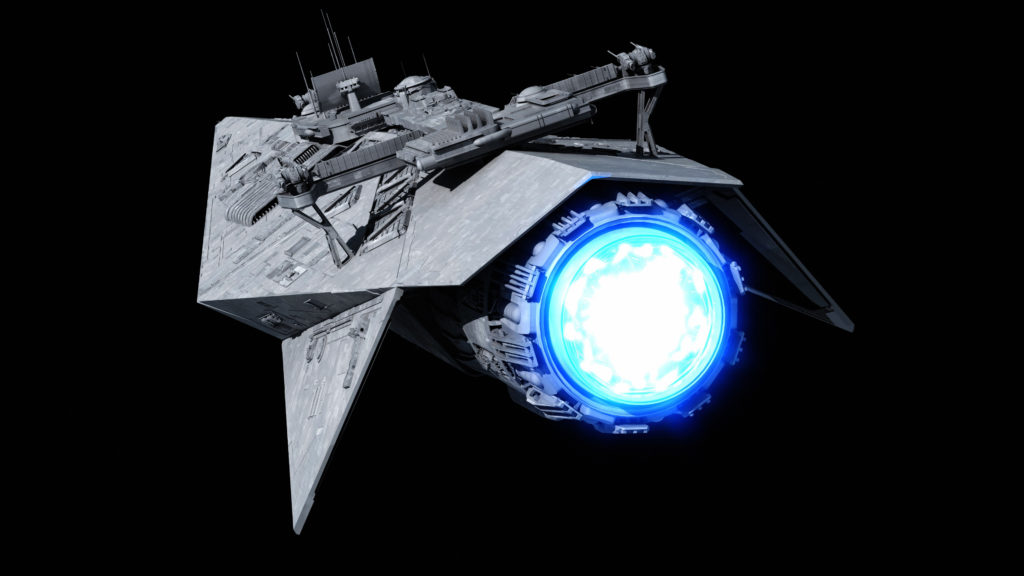 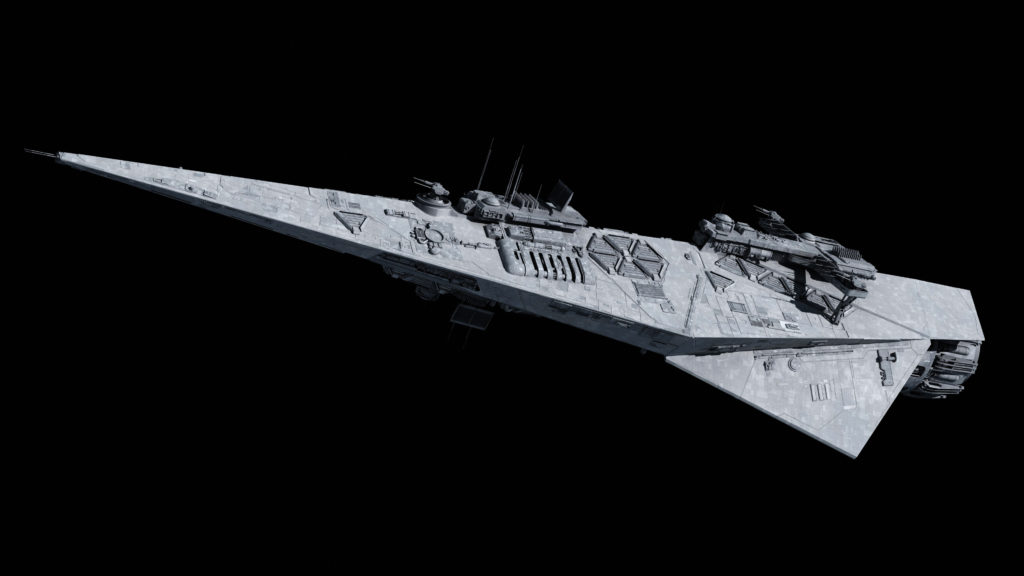 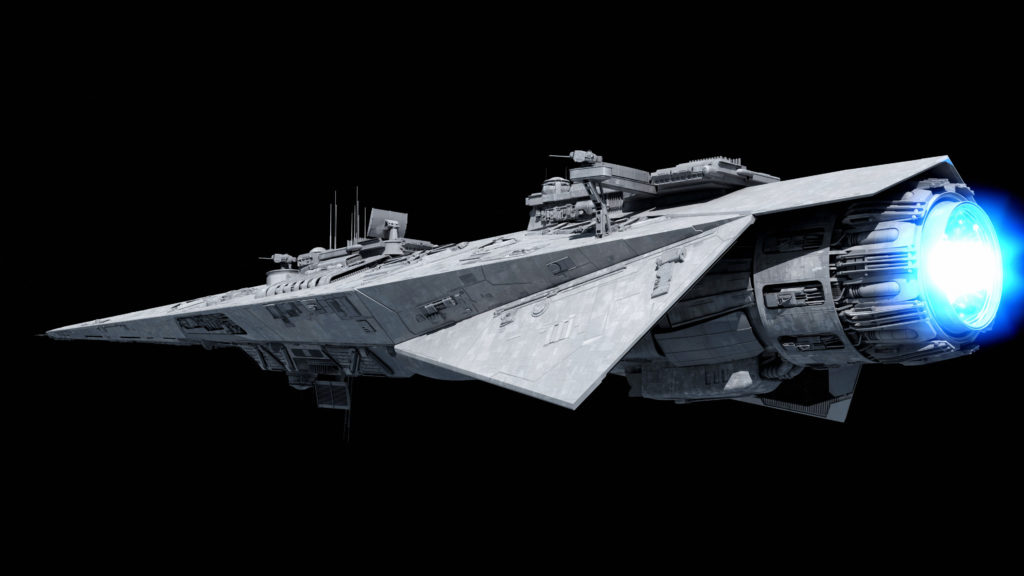 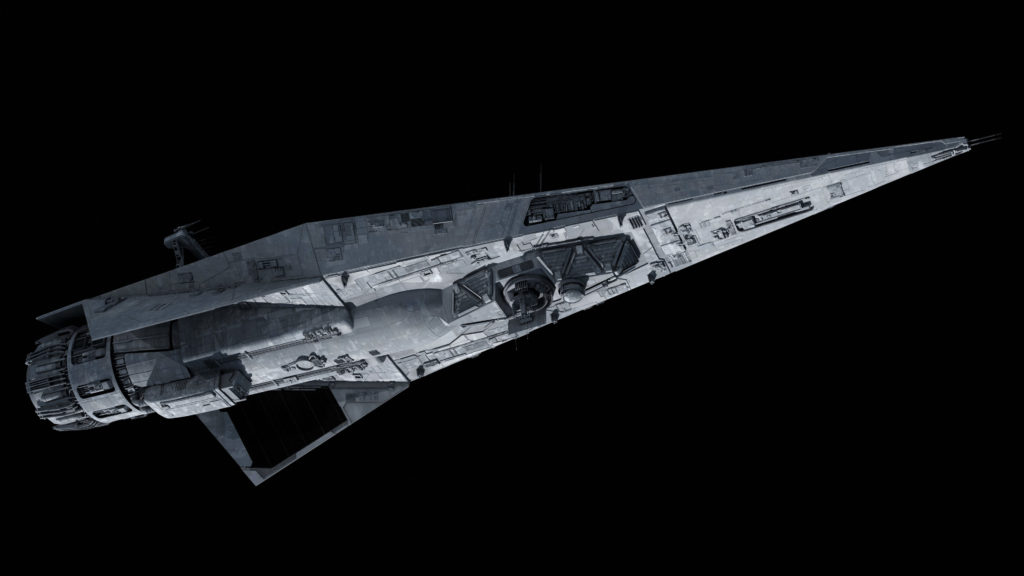 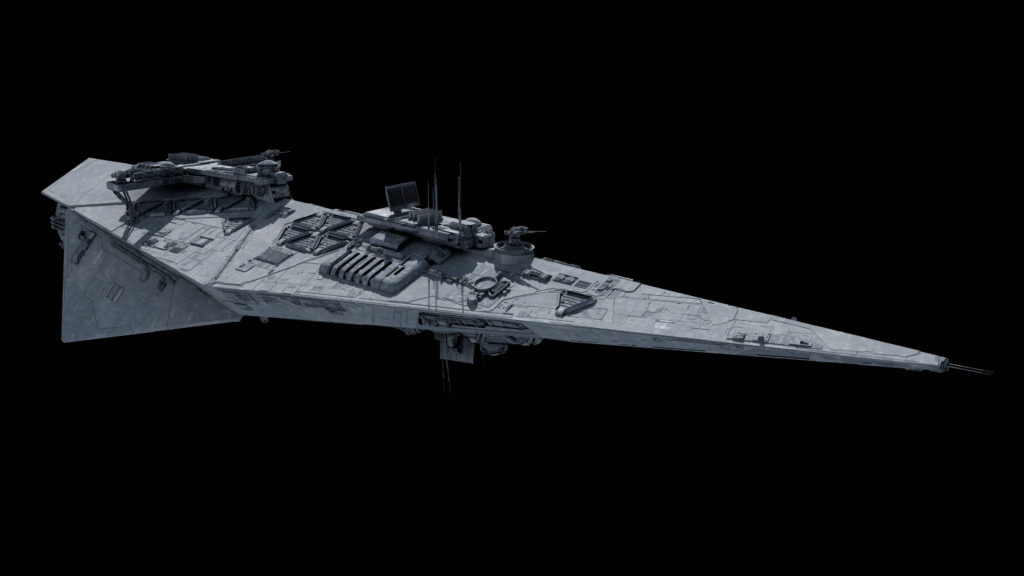 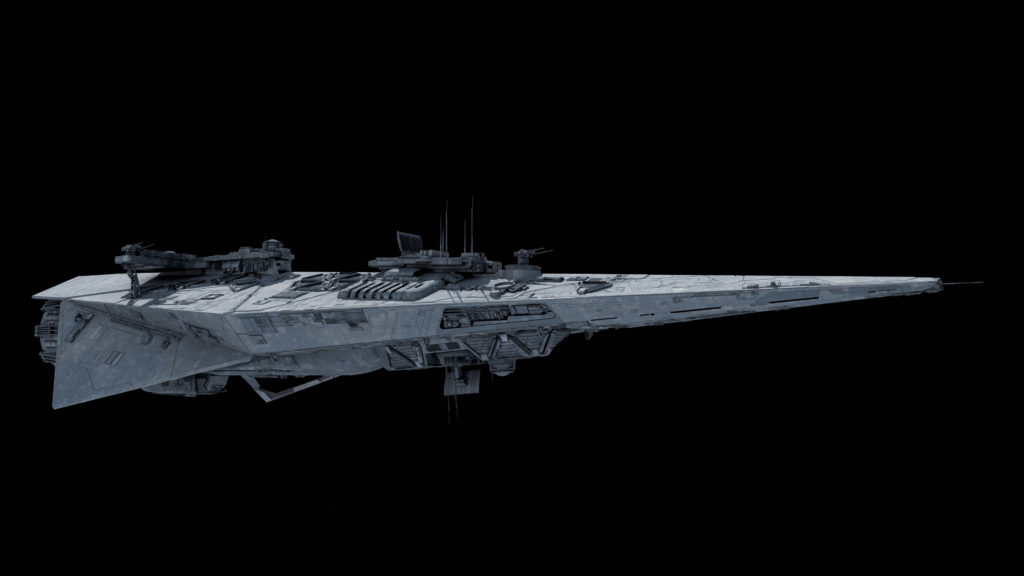 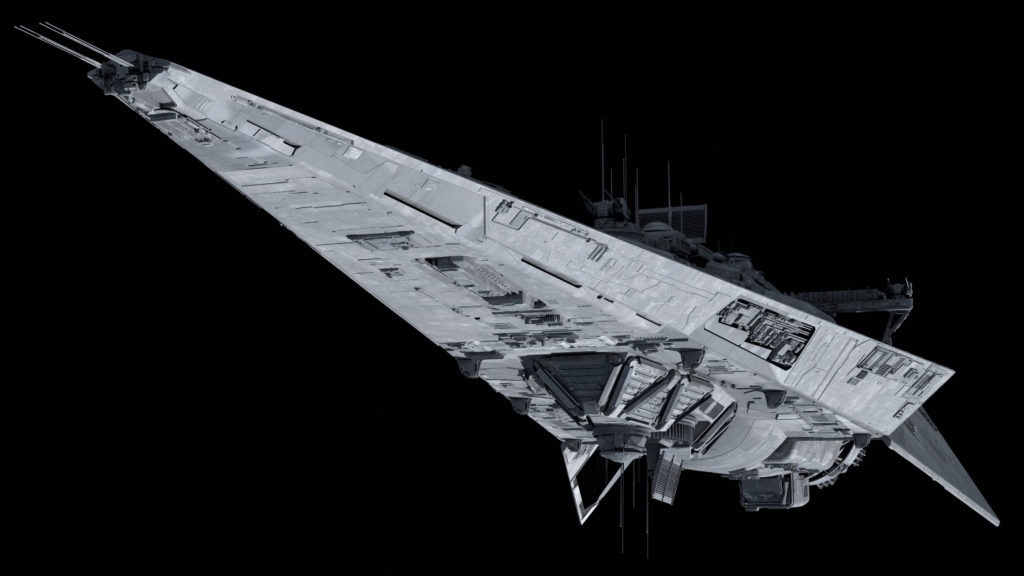 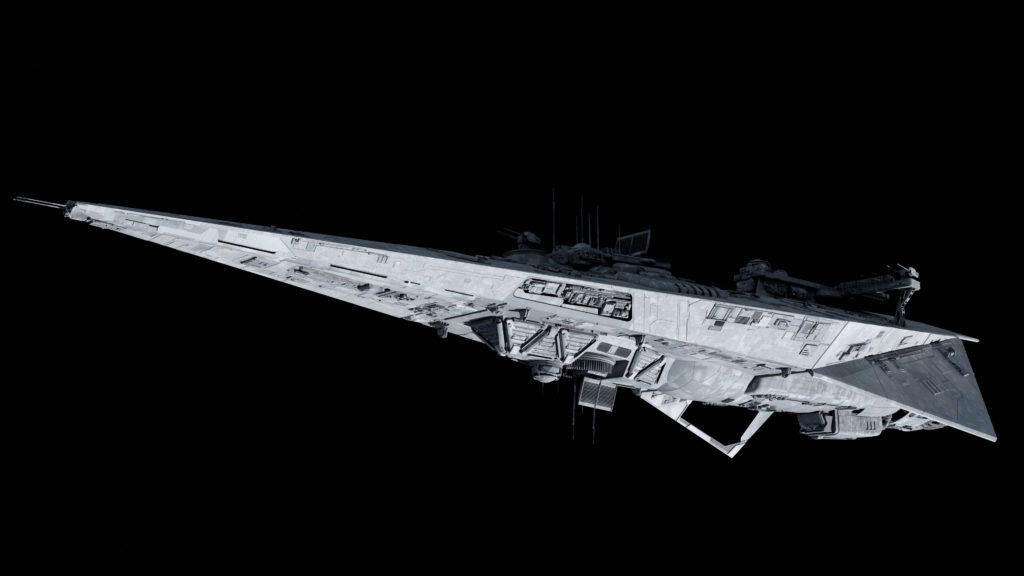 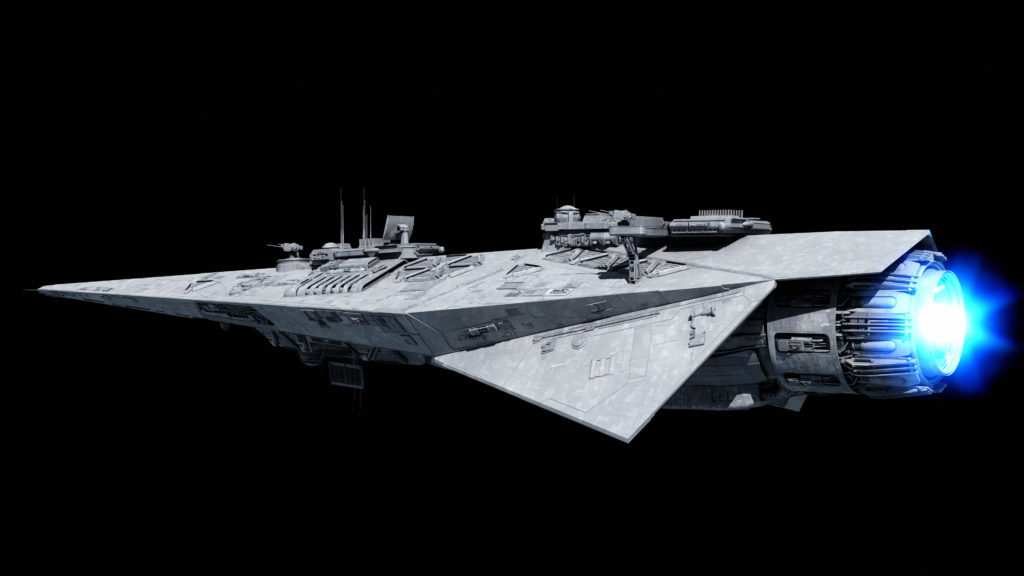 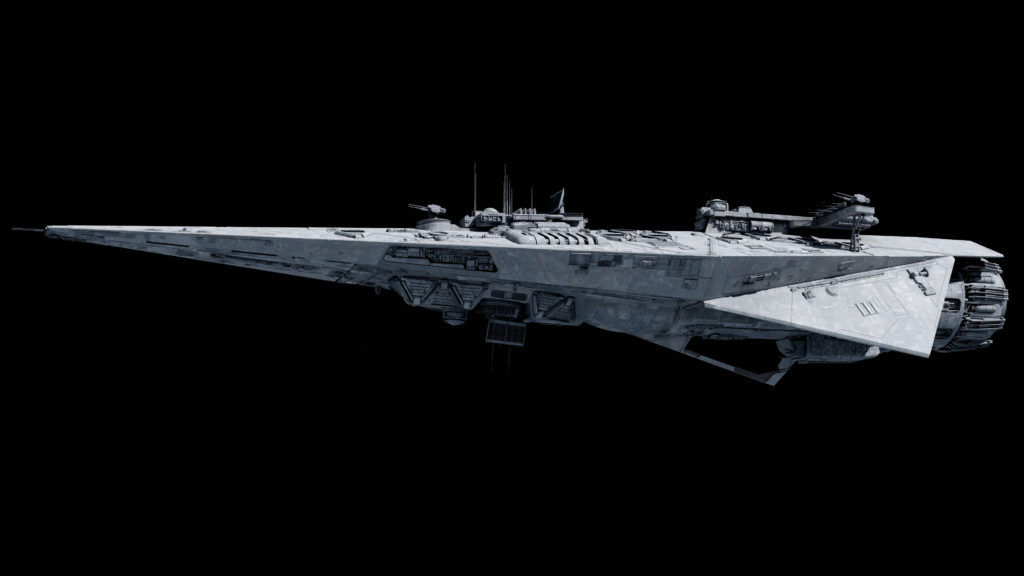 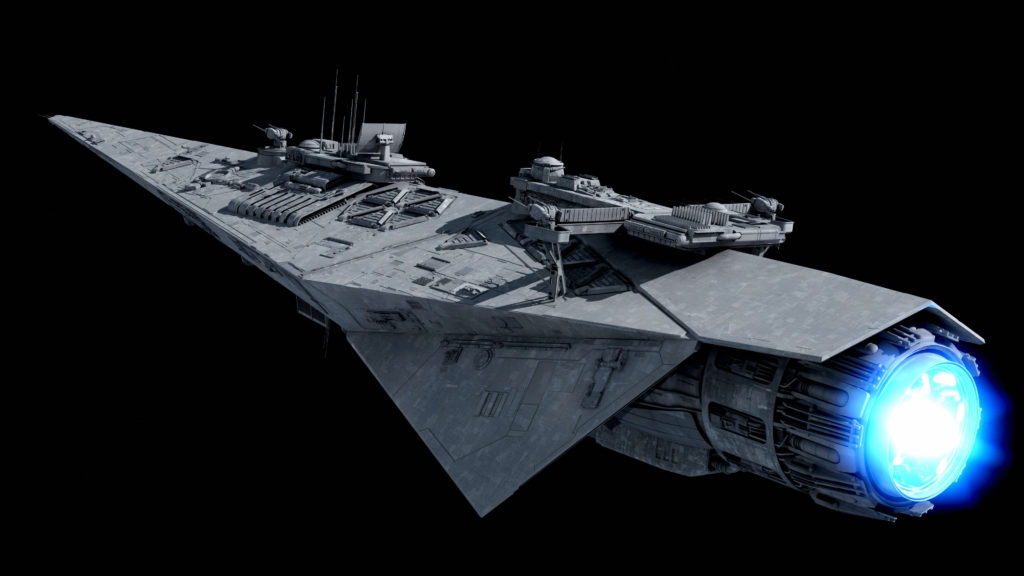 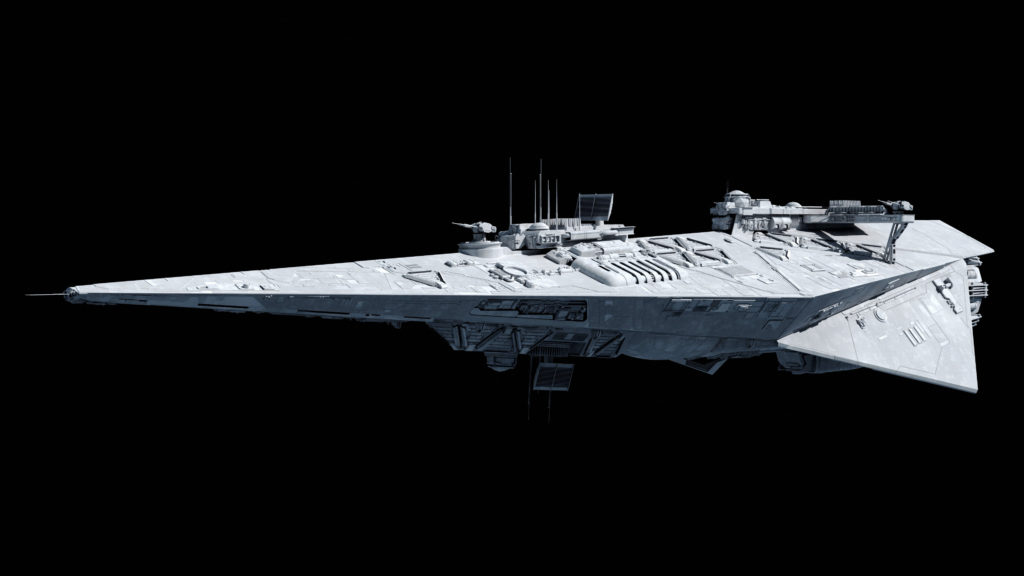 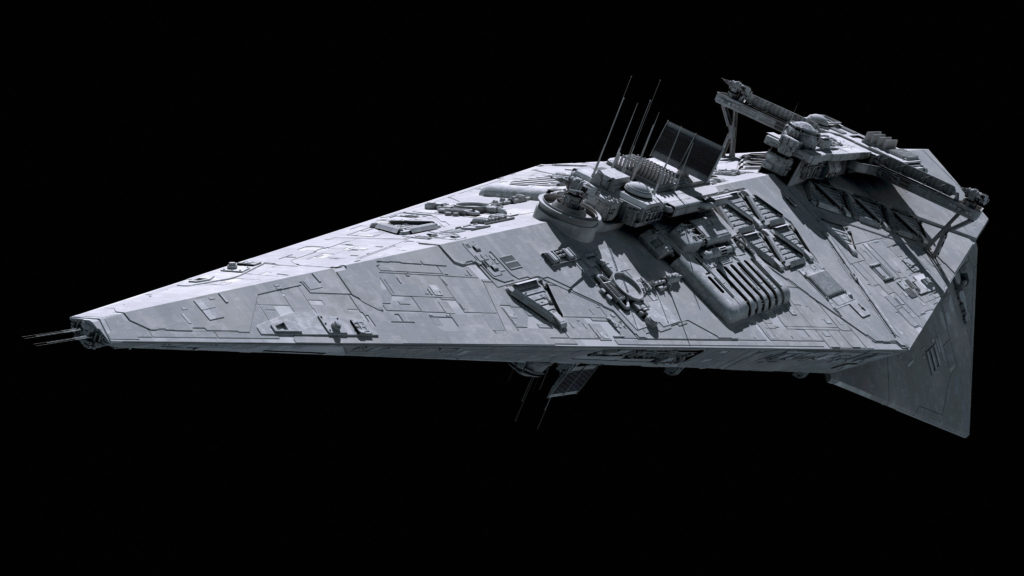 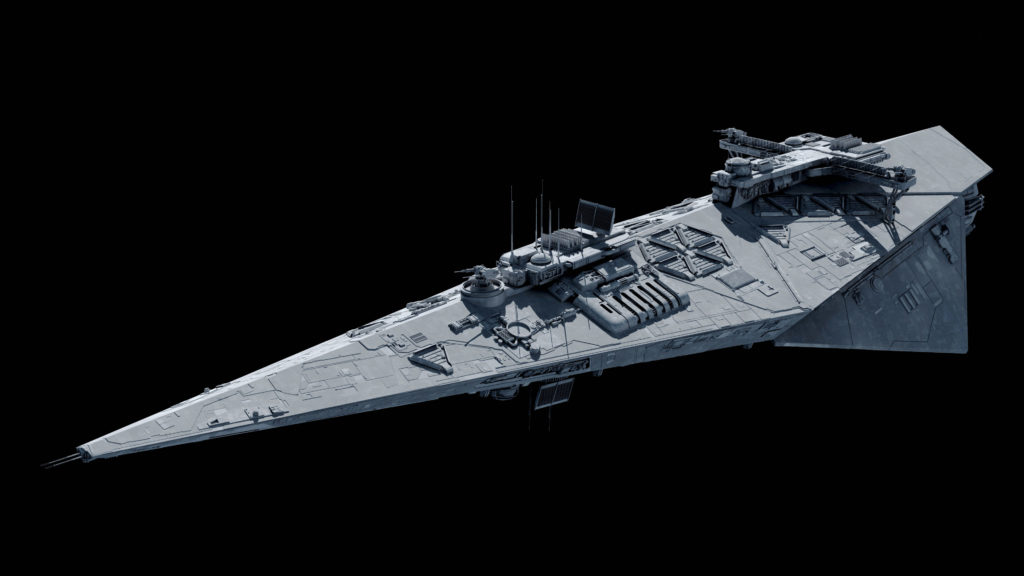 Another brilliant masterpiece to add to the fleet!

Do you have a rough number on the length? Also the idea of an electronic warfare / Slicer ship is pretty awesome.

I would still love to see a general purpose, fast attack craft variant of this. Here are my thoughts on the changes: Remove the mid-ship sensor arrays on the dorsal and ventral sides. Add 2 turrets on the dorsal side, flanking and just behind the forward point defense turret. These should be single or dual MTL. On the ventral side, add 2 point defense turrets flanking the engine/reactor bulge and just ahead of the wings/fins. Also on the ventral side, add a turret or missile array where the mid-ship sensor suite used to be. This should also be single or dual MTL.

How exactly does one enter and exit this ship if there isn’t a hanger bay?

Are there airlocks and/or docking collars that I’m just not seeing?

Created for the ISB as well as other lesser known and more shadowed agencies, the Indictor class corvette was the most specialized warship serving in the Imperial Navy as well as one of the rarest.

The Indictor’s ‘knife like’ design was packed to the gills with electronic equipment, allowing it to intercept communications and sensor signals across a huge area of space. These systems could decode encrypted signals and translate them and it was rumoured that the ship could even hack into other vessels computers from long distance and listen to what was being said in the ship itself. It was also rumoured this passive hacking could be used offensively to cause electronic problems or damage a targets electronics without the crew being aware of who caused the attack.

The ships sensors were also hugely powerful, able to log, track and identify thousands of targets at the same time, recording data all the time. The sensors also made hiding from one near impossible as they were powerful and precise enough to even track ships through dense asteroid fields. The hull was also coated in sensor baffling materials and when not actively searching for something or radiating with her main sensors an Indictor class ship could act like a ‘whole in space’ and the ships were notoriously difficult to track.
They relied on this stealth as their armament was limited to three dual light turbolasers and the shielding was very weak as was their hull armour. But Indictors were not combat vessels and if an Indictor ever came under fire its crew had made a grave error in allowing an opponent to come so close.

Despite their small size the Indictor’s were hugely expensive ships to construct and maintain thanks to their electronics suite and each was crewed by small teams of specialists that were near irreplaceable. It is rumoured that several of these ships were fitted with Cloaking devices and served with the Inquisitorius, but this may just be gossip.

That structure with the turrets and the struts at the rear is interesting, it’s not common to see support struts externally on a ship. I like it.

Reading the Tarkin novel, I wonder if (besides the length discrepancy) the “Carrion Spike” could have been built off of this hull. Would removing the EW equipment leave room to replace it with an advanced stealth generator? The canon appearance of the Carrion Spike is reminiscent of the stealth ship from the Clone Wars show, but this is inconsistent with the book’s description of it being a triangular (wedge shaped) corvette.

This is longer than Carrion Spike, which is a pretty small ship really. Looks like possibly less internal volume than some blockade runner variations if the length is right.

How’d you even make these??? (sry accidentally commented twice)

How do you even make these? (they are awesome btw)

Where does everyone find the specs for the warships I can’t find some of them on wookiepedia and I’d like to use some of them for some RP?

Many of the ships he makes are fan-made/non-canon ships. We’re just guessing by counting the guns and guessing scale lol

Any plans on doing a rendition of the Starhawk based on the descriptions in the new Aftermath trilogy?

This is off topic but can anyone tell me how fast the arquitence-class light cruiser was sublight/atmosphere. I have been searching for a while and I can’t find anything. An educated guess is also much appreciated!

I think this idea that SW capital ships need to have a “max speed” in atmosphere is a little dodgy. They output and dissipate so much power that atmospheric speeds are fairly meaningless, never mind that there are also a huge variety of atmospheres and densities to possibly consider. More pertinent is “what kind of environmental damage are you willing to accept”? Kick off full ion drive in atmosphere and you may have major issues… A normal speed limit healthy for the planet itself? No idea.

“Kick off full ion drive in atmosphere, and you may have major issues”…… hehe, eh, hehe. Not if your an Officer in the Imperial Navy.

Fractalsponge-standard sensor arrays. They’re on several of his other ships, too, if you zoom in.

The idea is that they are the individual transmitting/receiving elements behind each main triangular facet on a standard KDY tower sensor globe, and scaled as such.

Thank you very much for the reply, both of you! Very neat implementation, and it makes much more sense tactically.

Fractal, what’s do the facets measure on a side?

I love how sleek the ship looks! Please make an original Tie-variant light bomber (better than the tie-bomber). Thanks a lot in advance!

Where is the bridge on that thing ?

Hey Fractal have you ever considered doing a model for the pelleaon-class star destroyer from the old legacy era? I would absolutely love to see your design for it.

Just wondering, do all your finished ship designs go on: http://fractalsponge.net/gallery/ ?

Or is that obsolete now?

Pretty good work with that, Fractal.

Boi… This is just epic

the fins are just plain ugly, if I’m to be honest. The ship would look better without them.

I don’t see how. They kinda balance things out. Without them, the ships stern would be way to thin in my opinion

For a fast vessel, fins serving as extra heat dispersal radiators also do make sense, although at corvette scale, I would have thought most vessels would be using neutrino radiators.

It really doesn’t look that good from some angles without the fins. I’ve tried.

I won’t lie boss, I really love this little design. I’m a big guns, Allegiance-class kind of guy, but the sensibility of a tiny little ELINT boat that functions aesthetically as well as practically, I just cannot get over.

How come this ship doesn’t have any bridge windows, like those on the Vigil?

She doesn’t have an exposed bridge or command structure at all, its all tucked deep inside.
My guess would be that its like that to not obstruct any of the onboard equipment.

Steven A Futrell
Reply to  Arvenski

its actually a giant droid if I remember right

Wasn’t it the Imperial Probe Ship that was the giant droid?

Looking at it more closely… I looks kinda like a heavily modified Raider-class Corvette..

But maybe it’s just me.

Not really. It’s quite a different shape. Also, I made this original design a year before BF2 came out.

The raider-class was introduced in 2015 for the X-wing Miniatures Game.

And now, the Indictor is going to be the Imperial science ship in the big star wars mod for Stellaris under development.

Good to know. But this wasn’t based on the Raider, and obviously not vice versa.

To me it has more similarities to either the Commando-class Escort Carrier (which carries TIE Hunters) of the Imperial Storm Commandos or to the Mandalorian Tracyn-class Assault Cruiser at least when it comes to the shape.
Due to the Electronic Warfare moniker I guess this one has many sensor jammers, anti-missile fields (which disrupts targeting cpus) and communication blockers aboard.

The raider is a bad design anyway, an anti fighter ship with bad arcs and self obstruction from those solar panels

I’m guessing that the idea behind it is to shove the EWAR capabilities of a much larger ship into something cheaper and more expendable. I don’t think there is enough room to do more than match a Vindicator Star Frigate, but that’s more then enough for the Corvette-scale actions its going to be part of.

Yeah I agree, I just wanted to know if it is meant to act like a battlefield information gathering and data processing ship with secondary enemy radar and weapon jamming capability that would work as a sort of extension to a larger star destroyer, helping the commander control vessel movement and direct fire, or act as a sort of individual spy ship that collected data on the edge of enemy or high risk territory

Honestly, I’m pretty sure the answer is both lol

Hey Fractal, I love all the stuff you make! I’m just curious what you vision for the role of Electronic Warfare ships. Do they act as extensions of larger star destroyers or independent scouts?

Given how thier role is to engage in eletronic warfare, I’d think support vessel, giving ECM coverage for friendlies.